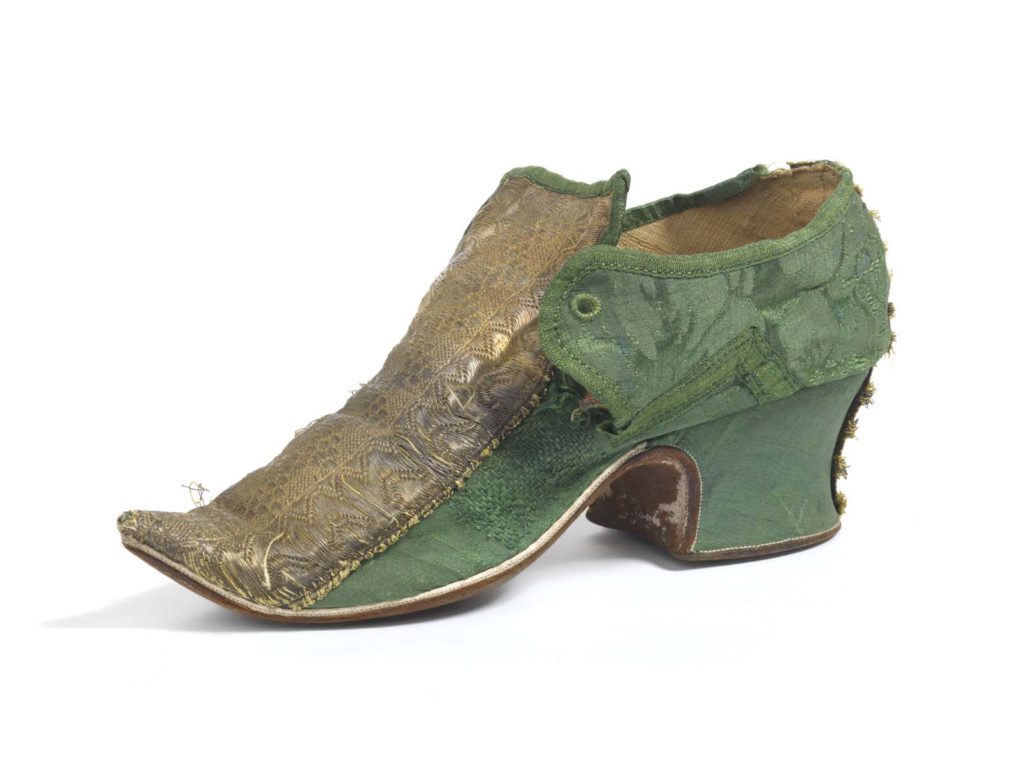 Fashion Museum Bath re-opens soon with a cavalcade of shoes in Shoephoria!

The most basic purpose of footwear may well be to help us take a walk, but an intense love of shoes as objects of desire – or as the Fashion Museum in Bath has it “shoephoria” – is a phenomenon that seemingly knows no bounds.

This shoe-fest brilliantly mines this obsession, and although it begins with the soles of a pair of Roman shoes found in archaeological excavations in the city’s Walcot Street, Shoephoria is much more than a linear historical narrative.

The archaeological finds from Bath’s famous Roman past are set alongside prostheses and trainers worn by modern-day Bath resident Harmonie-Rose Allen, who lost her limbs after contracting meningitis as a baby. The display follows her progress from Peppa Pig prosthetic limbs to her first blades – which are both leg and shoe in one.

It’s an approach that sets the tone for a fresh way of looking at the history of footwear and its wearers by revealing the utility, creativity and style of shoemakers and wearers throughout the centuries. 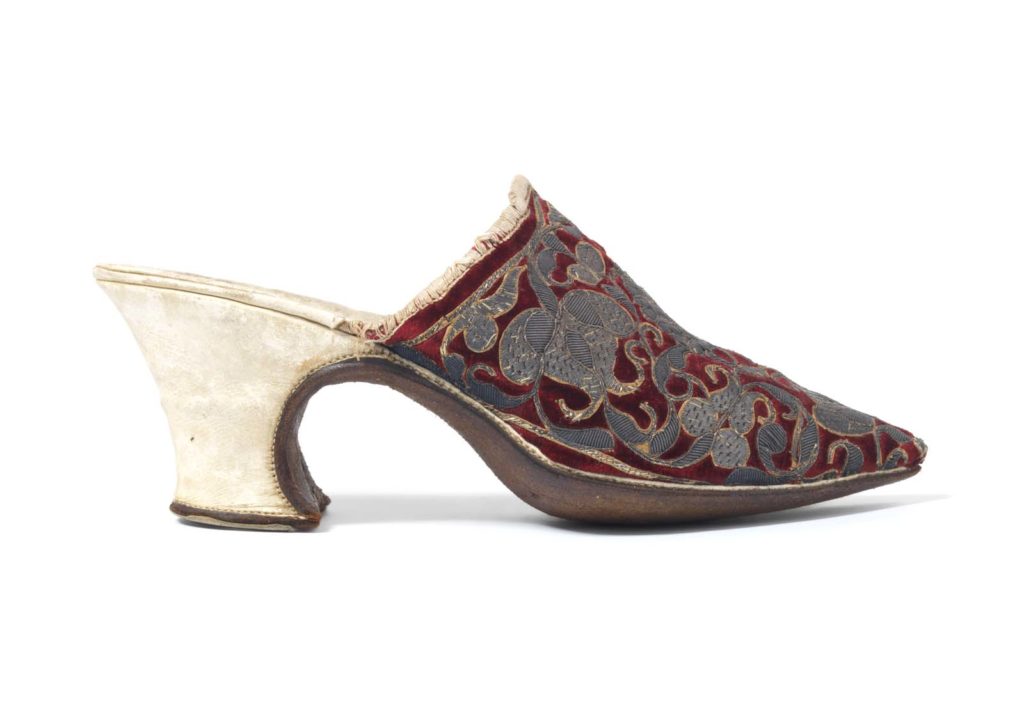 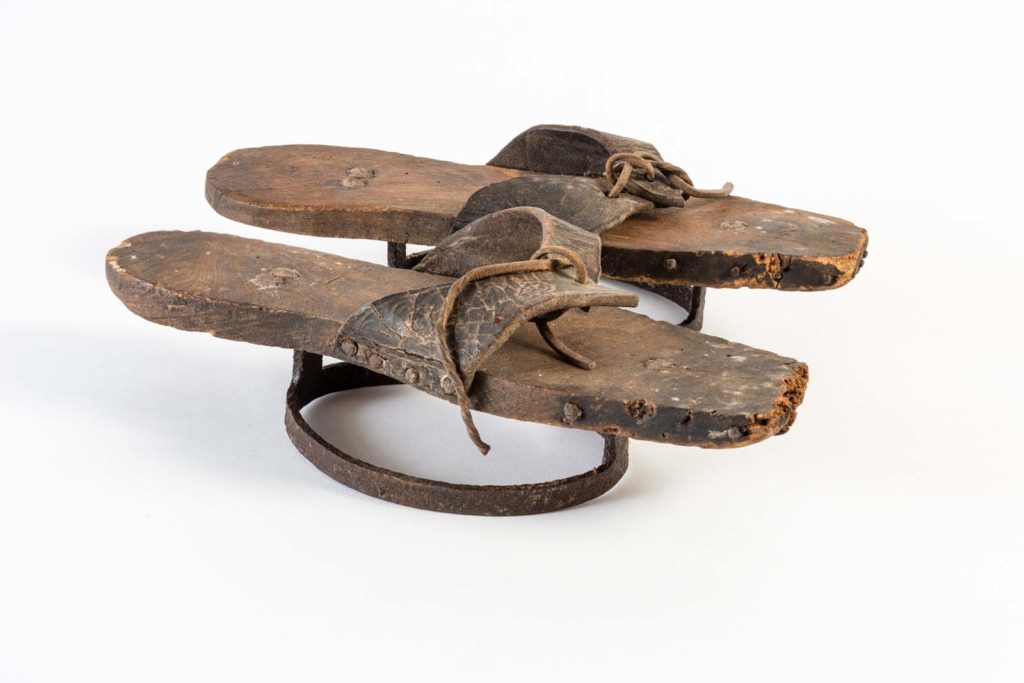 Mining the museum’s centuries-spanning collection for 350 pairs of boots and shoes alongside guest ‘star’ shoes the exhibition also looks at the materials used in shoemaking – from hand-crafted shoes to modern manufacture.

To be fair, the oldest shoes in the museum’s collection – a pair of red velvet mules from the 1690s – sets the bar quite high in style terms, but these vogueish old mules rub heels with a variety of shoes ranging from stylish sneakers and trainers of the 2000s to Queen Mary’s 1930s diamanté bow shoes by celebrated British shoemaker Rayne.

There’s also Queen Victoria’s rather more functional and well-worn elastic-sided boots dating from the 1850s made by shoemaker Joseph Box.

And of course there are designer shoes by the likes of Vivienne Westwood, Manolo Blahnik and Jimmy Choo which also make an appearance. Blahnik even presents a selection of his signature classics and footwear inspired by his passions, including gardens and Georgian Bath.

These examples and others are all revealed in a dramatic sequence of ten large ‘shop window’ display cases, grouped in themes showing shoes for different activities. 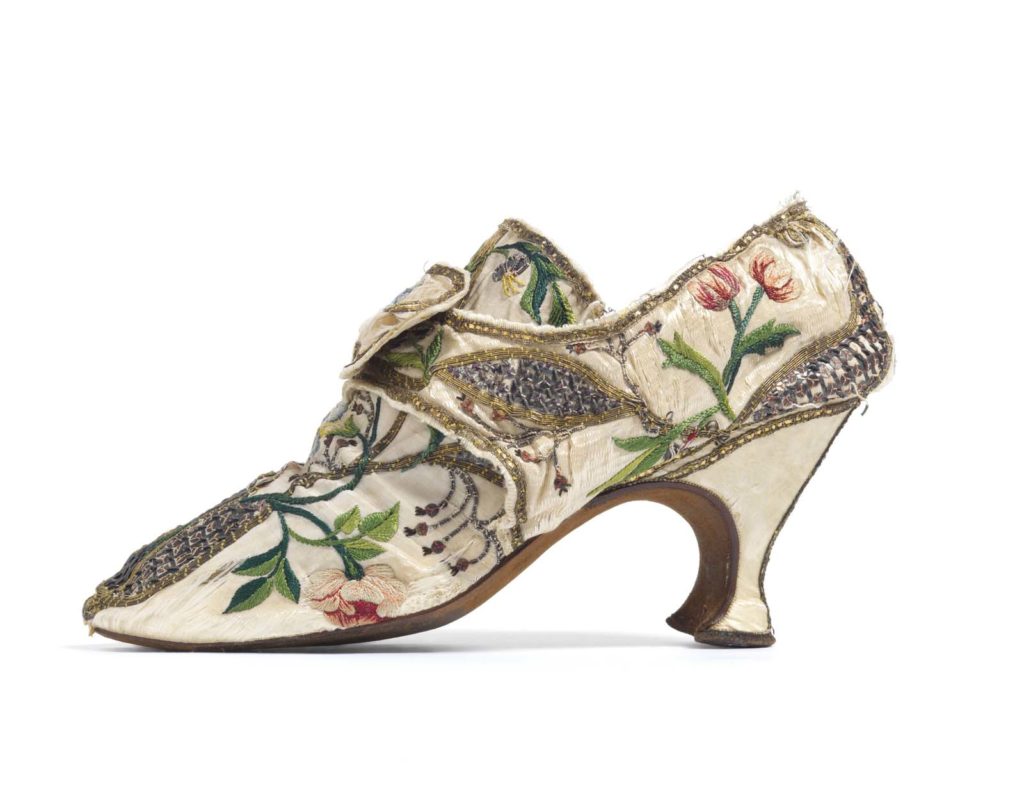 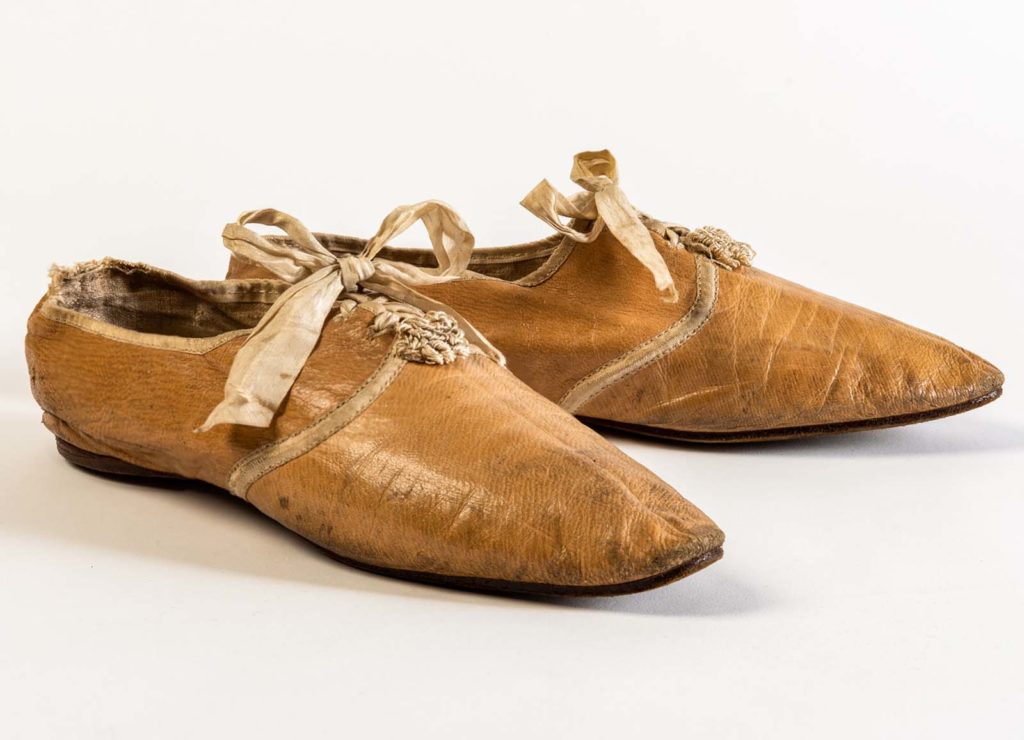 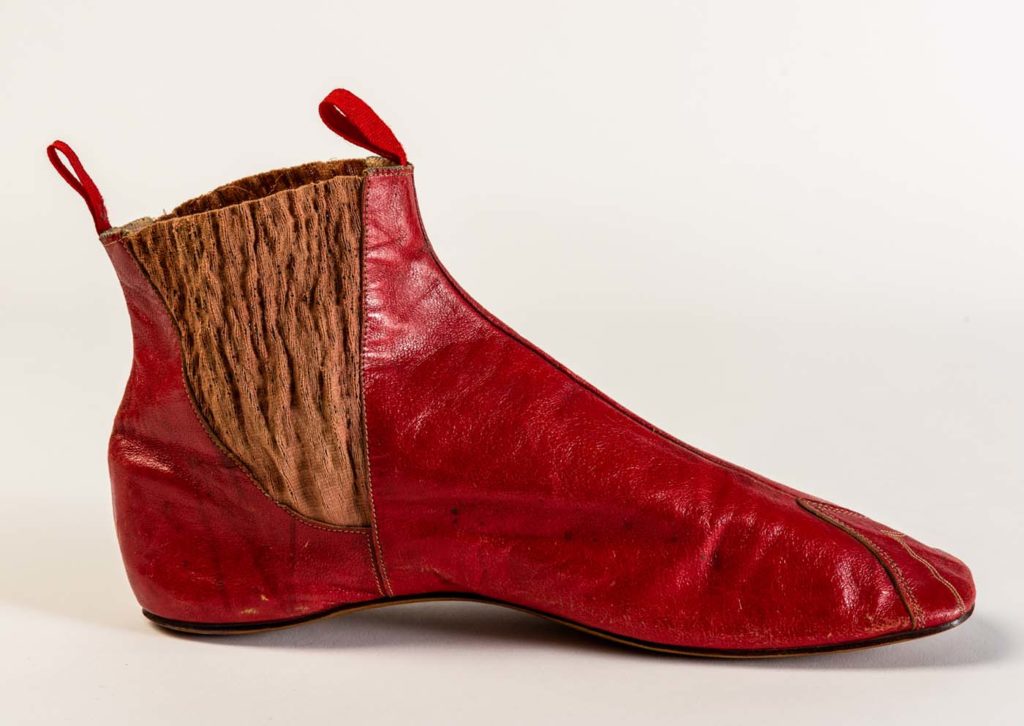 There are fishing waders alongside a pair of fishnet fashion boots by American shoemaker Herbert Levine; shoes worn by iconic figures from British cultural life, including those worn by Nicola Adams on Strictly Come Dancing in 2020; the former footwear of actors Noel Coward (suitably monogrammed), Ginger Rogers and Margaret Lockwood and music hall star Fred Kitchen.

Margot Fonteyn’s 1940s and 1950s ballet shoes are set alongside a pair of foldable ballet flats by Cocorose London produced in collaboration with The Royal Ballet, and pairs of pointe shoes by Freed for different skin tones, a recent collaboration with Ballet Black.

The museum is also working with People for the Ethical Treatment of Animals (PETA) to showcase ‘vegan shoes’ and different contemporary options to the traditional use of animal skins for fashion footwear – like the bright red platform sandals by leading vegan shoe brand Beyond Skin, as worn by Miley Cyrus in a 2017 Cosmopolitan cover shoot, which are made of recycled plastic bottle tops. 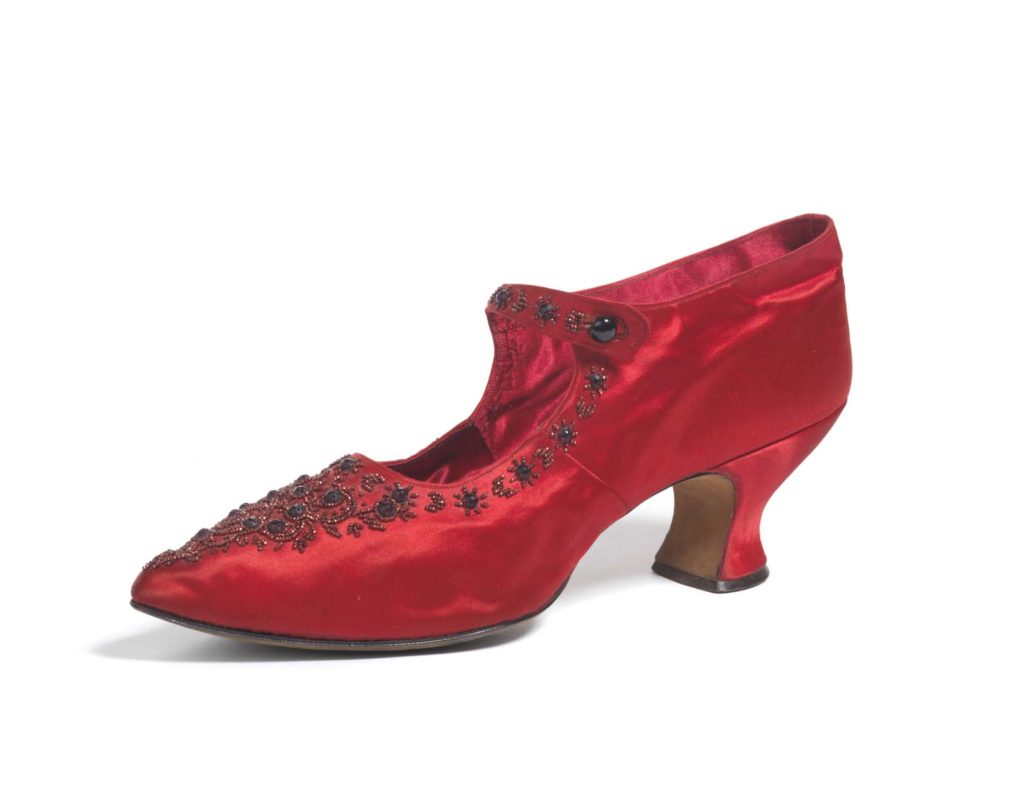 Shoes have always been an important part of the story that unfolds at the Fashion Museum and the museum’s celebrated A History of Fashion in 100 Objects display  is augmented with some signature shoes, including 18th-century pattens (overshoes), delicately embroidered baby shoes, treasured silk wedding shoes, sparkling party shoes, examples from the 1960s space age and the flamboyance of the 1970s, right up to the rise of the sneaker.

With the accent on creative juxtapositions the display is designed to bring out new connections and intersections between the historic footwear and the fashions on display in the wider collection.

A wearer’s walkway also shares community-based photos and narratives of people and their shoes, which the museum hopes will in turn encourage visitors to share their own shoe stories on social media channels using #MyShoephoria.

It’s a fascinating close-up look at the various styles that make up the history of shoes and the ways people across the centuries have made their highly personal footwear choices. 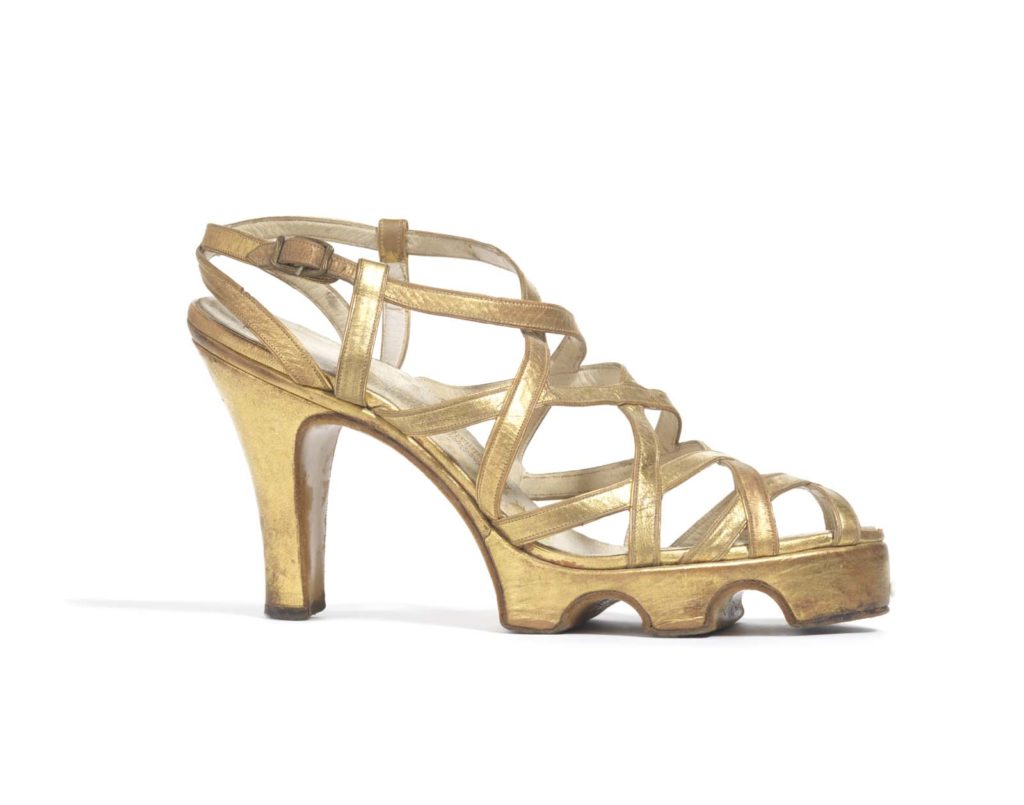 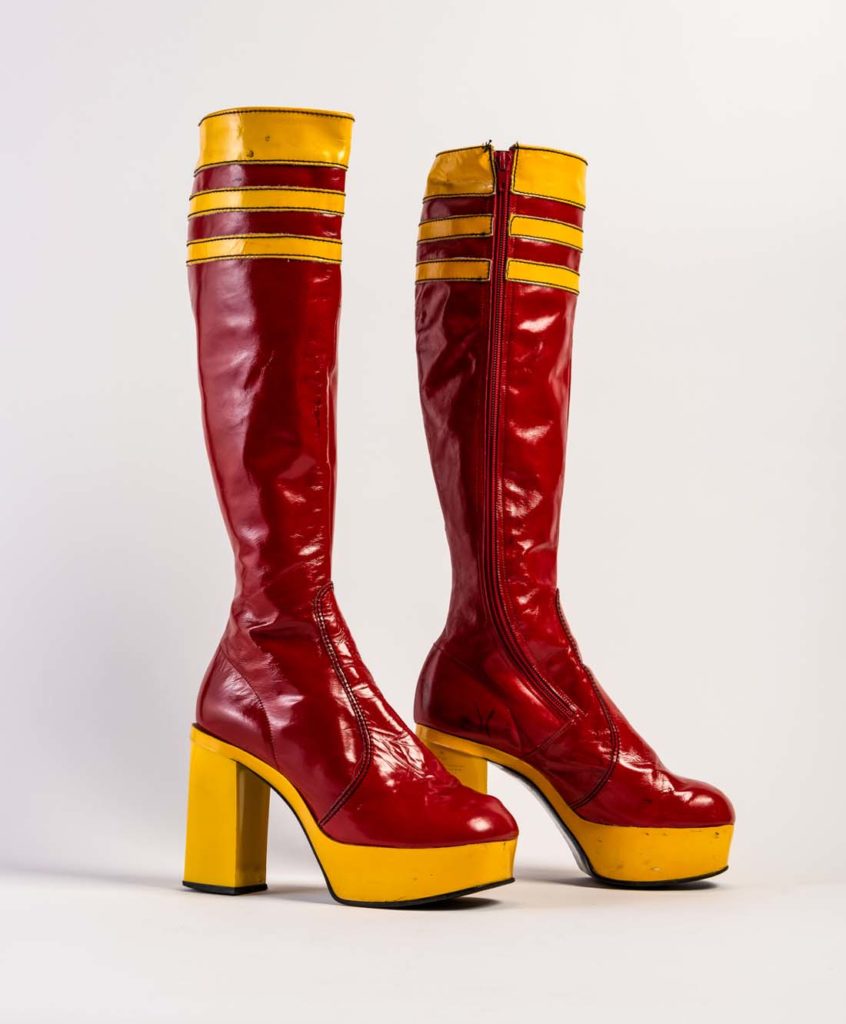 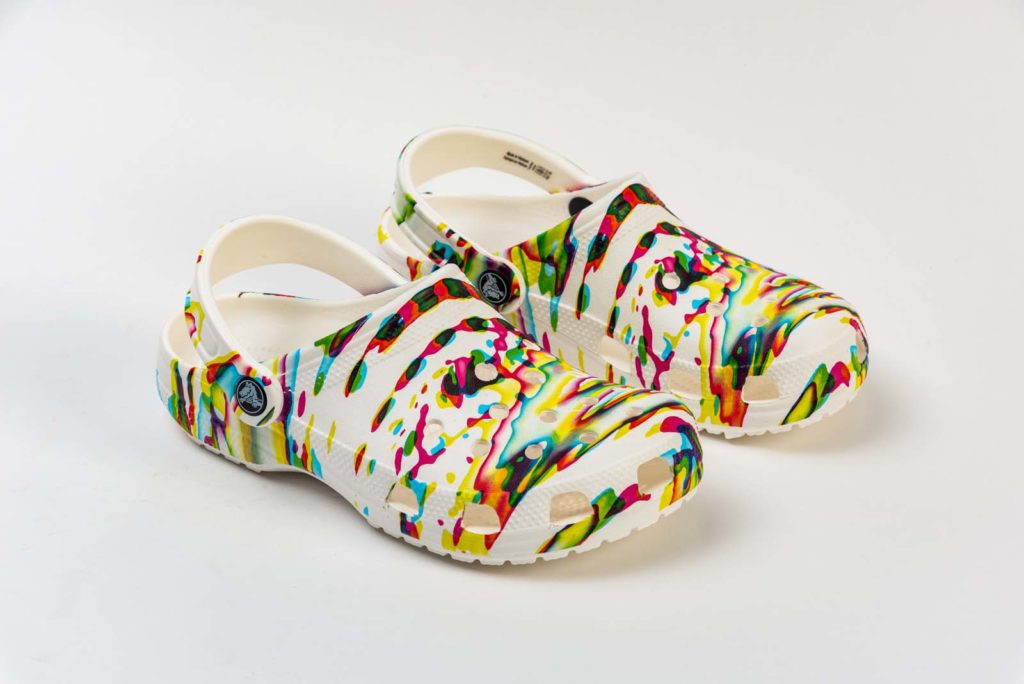 Out of this World’ classic clog, by Crocs ca 2020. © Fashion Museum Bath

Shoephoria! is at the Fashion Museum Bath from May 18 and will run into 2022.

The Fashion Museum Bath holds a world-class collection of contemporary and historic dress located in a World Heritage City. The museum was founded by writer and collector Doris Langley Moore as the Museum of Costume, Bath and has been based in Bath’s Grade 1-listed 18th century Assembly Rooms since 1963.…