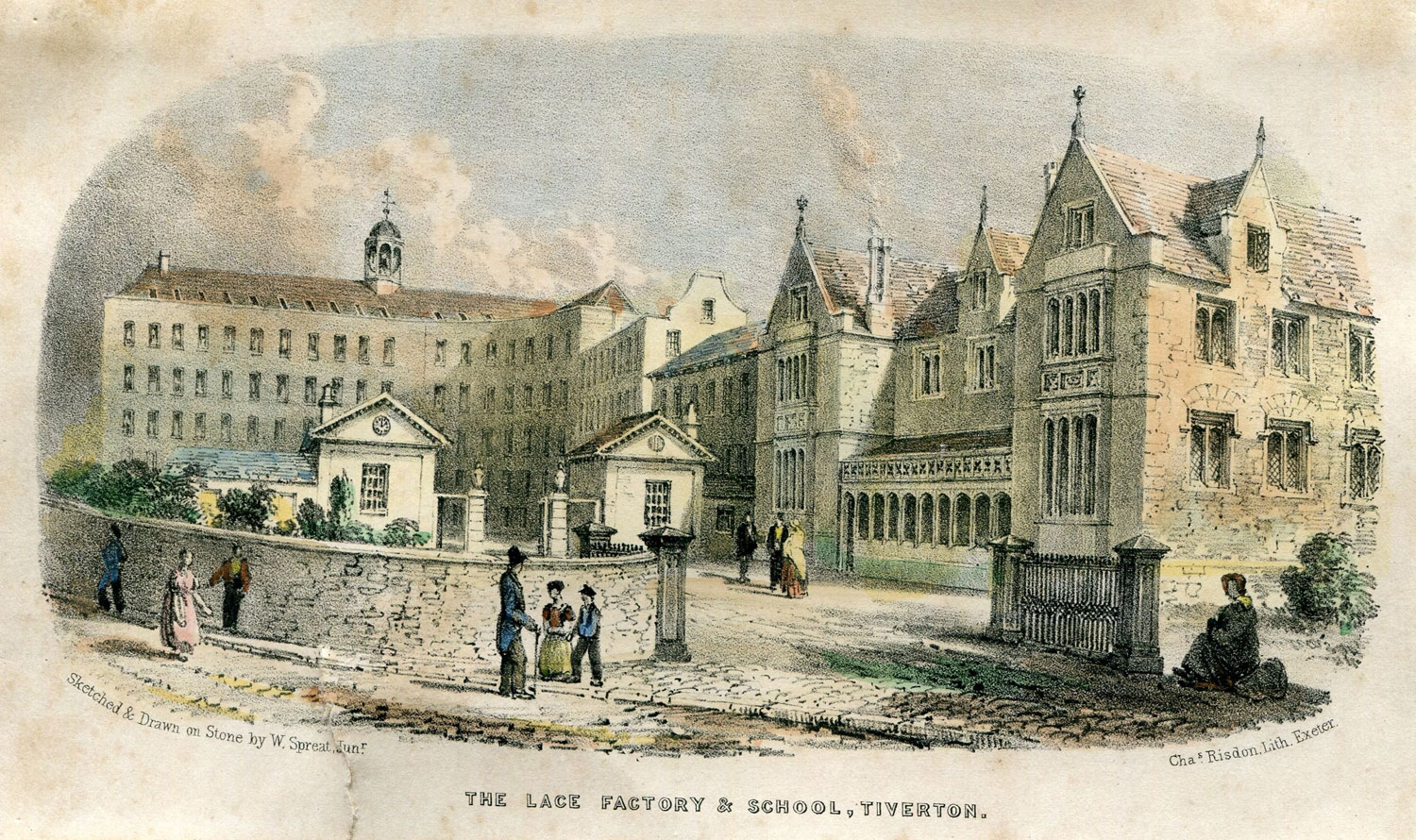 The Heathcoat factory and school at Tiverton pictured in the Victorian period. Courtesy Tiverton Museum of Mid Devon Life

Pippa Griffith, Director of Tiverton Museum of Mid Devon Life, on the charismatic inventor John Heathcoat who brought his ideas, factory and workforce to Tiverton, transforming the fortunes of the town

John Heathcoat was born in Derbyshire in 1783. A farmer’s son, he was apprenticed out to a stocking maker near Loughborough but he soon developed a real knack for machinery and began developing his own designs, which eventually led to the ‘Bobbinet’ lace machine, which mechanised lace production.

Making big swathes of lace by machine revolutionised what had been a very painstaking, hand-driven industry and to this day Heathcoat is quite unpopular in areas of Devon like Honiton that relied on handmade lace.

In Loughborough Heathcoat’s innovations also made him unpopular; other local merchants were copying his machinery and didn’t like the fact that he was trying to patent it. In 1816 his factory was attacked by “an armed and angry mob.” Interestingly Luddites were blamed for the attack but it seems much more likely the mob was paid by other merchants to try and scupper Heathcoat’s business.

Trouble had been brewing for some time and he had been down to Tiverton the year before to suss out potential sites and he purchased a site right by the river that had been used as a woollen mill and very briefly as a cotton mill. 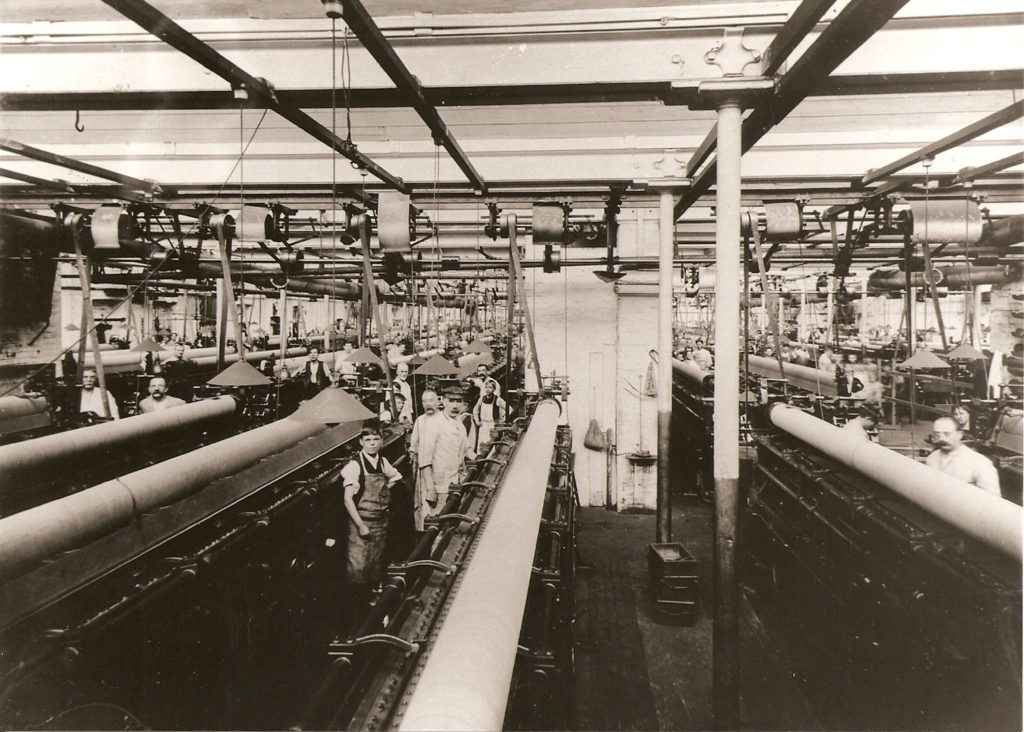 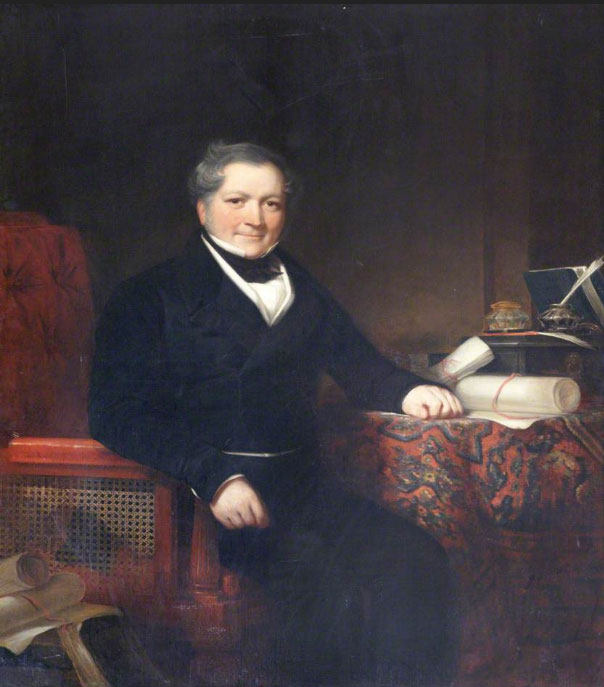 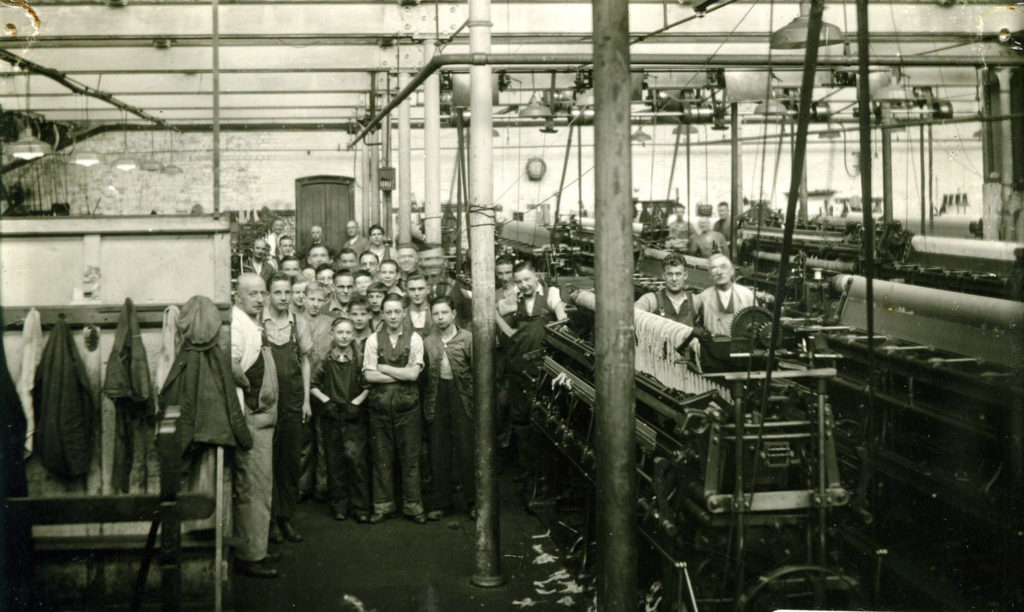 So in 1816 he moved his whole operation down to Tiverton and quite a number of his workers and their families followed him, walking all the way. It must have been quite daunting leaving everything they knew to come to a place they presumably knew nothing about, leaving their extended families behind and possibly never seeing them again.

It’s a really long way, nearly 200 miles, and two of our trustees recreated the walk a couple of years ago; they found it pretty hard but in 1816 they didn’t even necessarily have the maps, they would have literally been finding their way from one village to the next, so it must have been quite a trip. We’ve got the names of at least 100 families who came and some of the descendants of these people are still in Tiverton – in fact there is a little row of cottages in Tiverton called Loughborough.

Heathcoat must have been very charismatic for people to want to follow him to Tiverton where he became a leading light – he was MP for many years here as well.

Once he got his factory established he started seeking more housing for his workforce. He started off by renting the existing housing stock in the town and then as the town and his workforce both grew they built the first major terraces for employees in around 1840, a practice which continued right through into the early 1900s.

The houses were quite well sized for their time and the later ones had indoor toilets. However, the wages he paid his workers were lower than in Leicestershire. In fact he did quite well out of the move because he was also offered £10,000 in compensation for his factory loss but only if he would stay and rebuild it in Loughborough, which he refused to do.

Meanwhile his patent application was successful and the other people using machines based on his design had to pay him for a number of years, and he made £10,000 a year.

He also provided a few amenities for the town; he and his family set up a factory school on the factory site, which is one of the earliest factory schools in the south-west and possibly looked ahead to The Factory Act of 1833, which was the first of several acts to regulate conditions for children working in factories. The family also supported a church construction nearby and a couple of community buildings. 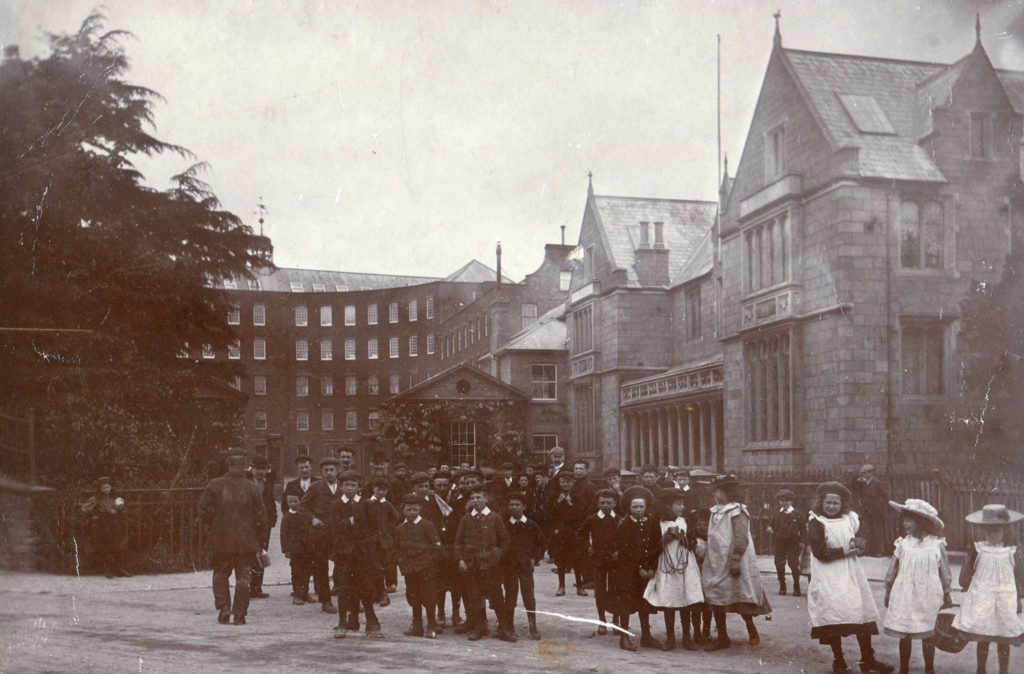 The exterior of the lace factory and school. Courtesy Tiverton Museum of Mid Devon Life. 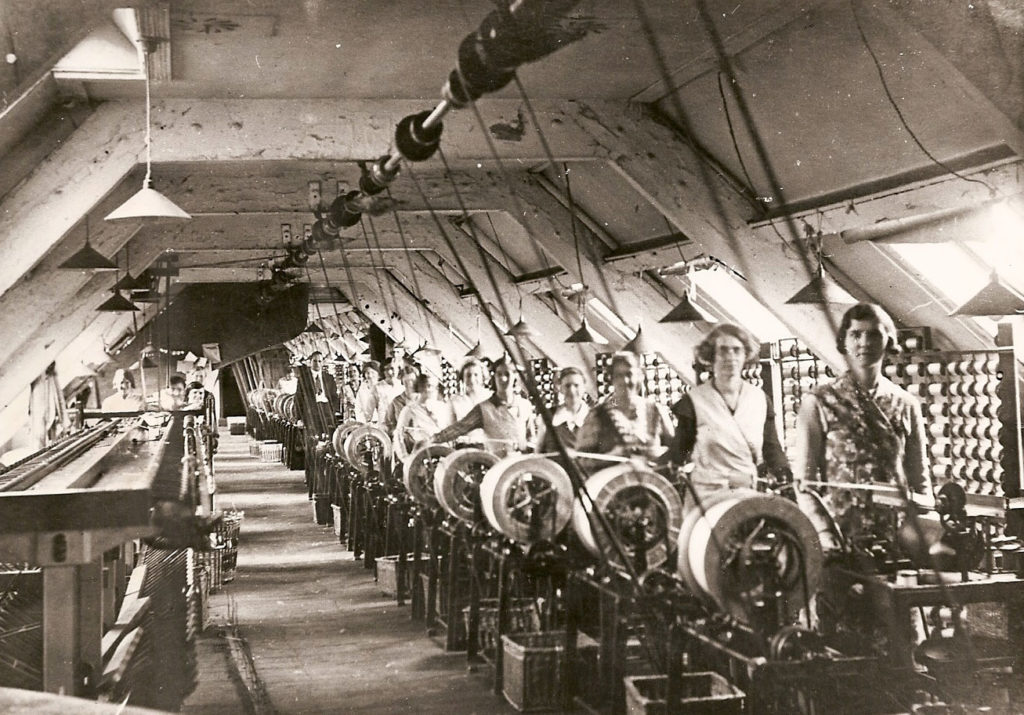 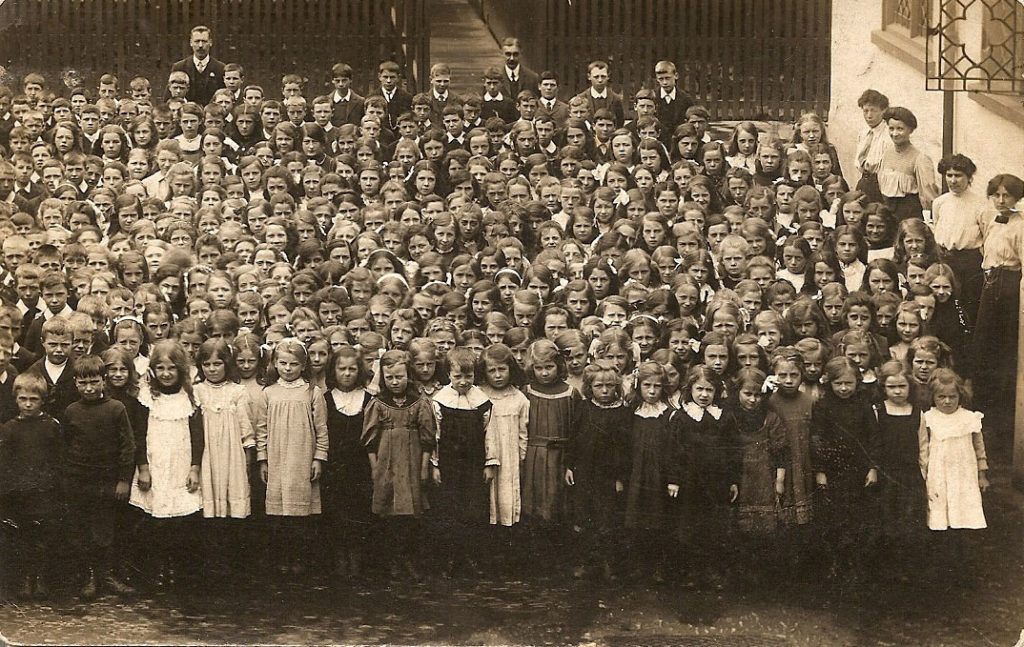 I think Heathcoat probably had an element of the reformer in him, and I think he was nicer to his workforce than he needed to be, but there was probably some self-interest going on as well. He saw the benefit in everyone being a bit more educated, having decent housing, being a bit happier. The Heathcoat factory even went on to have an early pension scheme in 1906 and a cooperative scheme too.

So Heathcoat had a huge impact on the town. He brought stability at a time when the wool trade had gone into decline, the town was getting quite poor and people were leaving to seek employment elsewhere. Heathcoat’s arrival reversed those fortunes, provided employment, and helped expand the town, which became a prosperous little market town for the following century.

The factory is still the dominant building on the western side of Tiverton. Today Heathcoat’s factory manufactures high tech fabrics used by fire brigades and army and there are various aerospace and aeronautical uses as well. The parachute of one of the Rovers that landed on Mars had fabric from Heathcoat Fabrics.

At the Museum we’ve got one of the Bobbinet lace machines from the 19th century together with a lot of archival and photographic material.

The factory log books are fascinating, recording the day-to-day events from the first half of the 20th century. During the First World War the factory made drilled shell cases and provided netting for very early gas masks and the log books are full of accounts of workers having to go to tribunals to see if they can continue working for the factory – or if they are going to get called up to the army. There are also accounts of accidents.

They also include newspaper cuttings about the factory and some photographs as well. We’ve amassed a large collection of photos from different sources too.

Some of them reveal how the different departments inside the factory looked; the Lace floor had dozens and dozens of huge machines operating. We’ve got a recording of what one of them sounds like and you can just imagine that amplified by however many machines there are in that room. It must have been really deafening. But of course, they only allowed men to work in there. Women worked in the spinning departments and the folding departments so it was gender segregated for a very long time.

During the First World War a few women went to the Lace Floor but as soon as the war was over they were out and back to spinning and folding. There are occasionally men pictured in the spinning department photographs, but that’s because they are the supervisors. 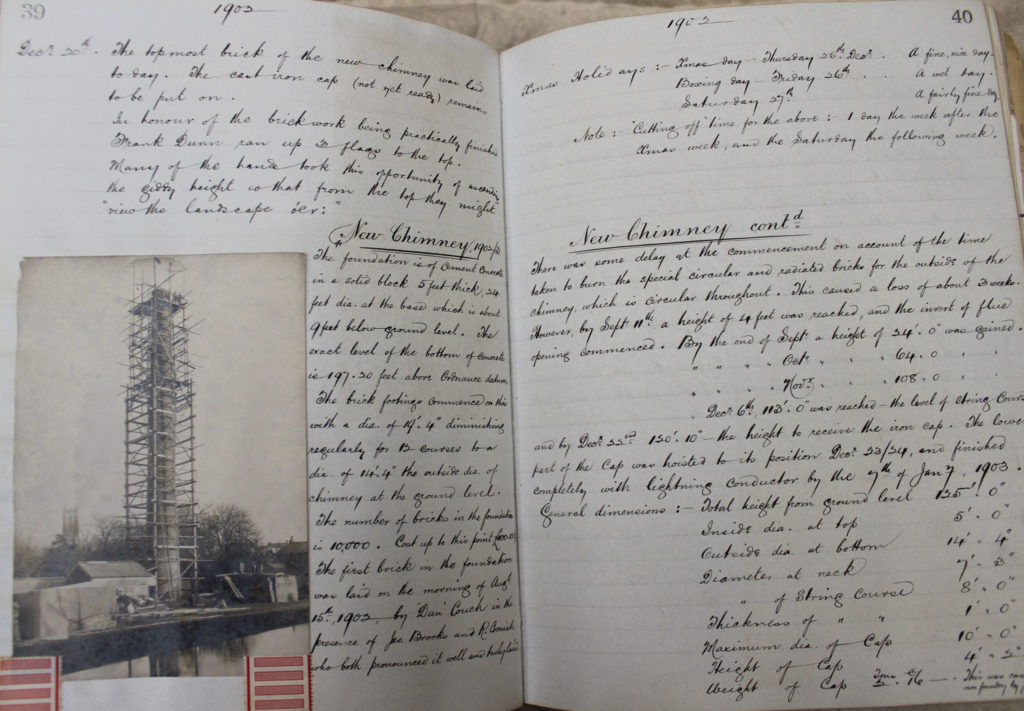 A page in the factory log book from 1905. Courtesy Tiverton Museum of Mid Devon Life. 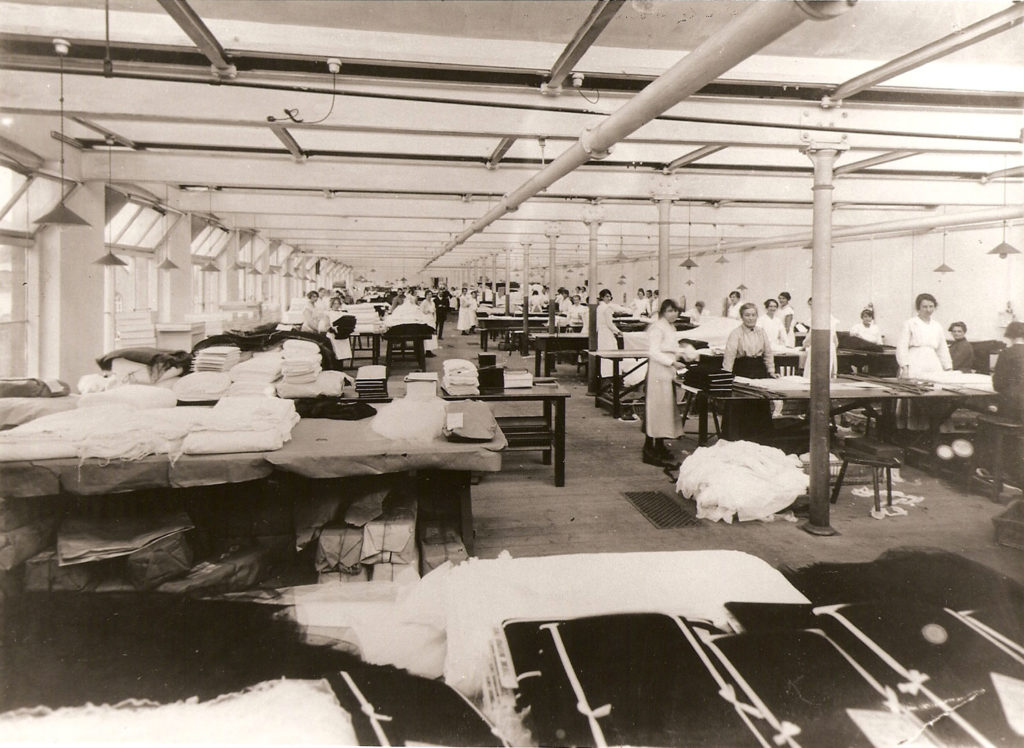 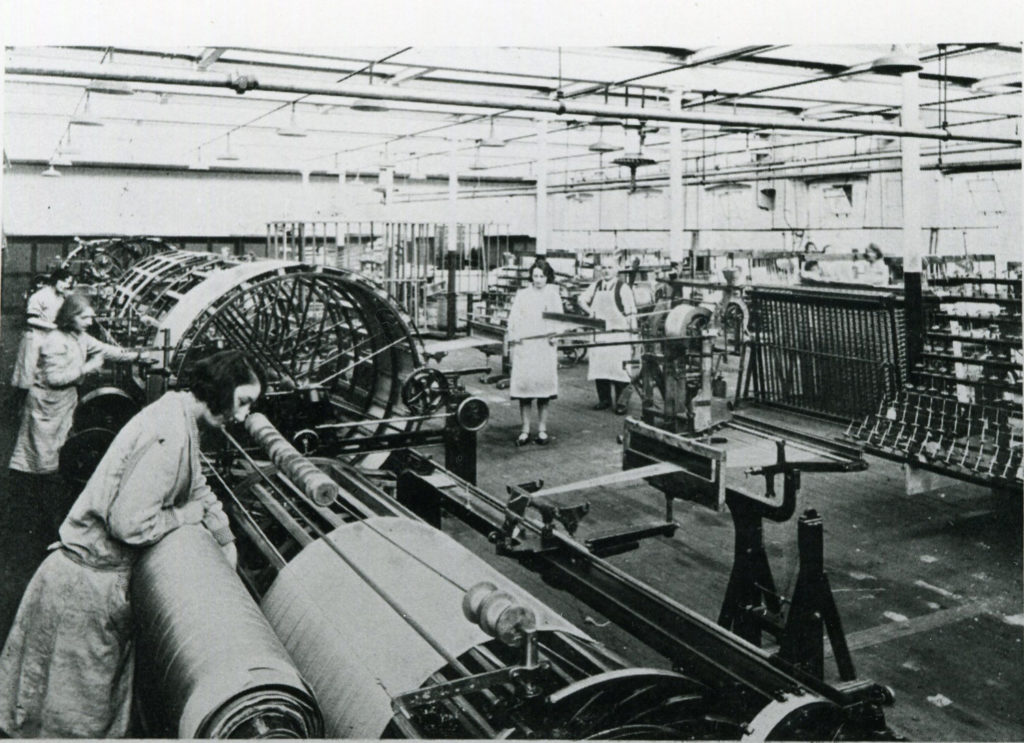 But I think it’s great having photos of ordinary people doing their daily job, operating their machines and doing activities that weren’t always recorded and that were probably taken for granted.

We have redevelopment plans to redisplay the museum and an important part of that is to update the galleries based on the full Heathcoat story and use the photographic archive more, because the factory is still there, making really innovative products and it all began with John Heathcoat, the man who shaped the town we know today.

Tiverton Museum is a vibrant, award-winning and much loved museum that provides extensive displays on local history. It runs a lively events programme, including temporary exhibitions (on anything from the history of underwear to local farming memories), guided walks, talks, holiday craft activities, themed days and lots more. The museum…

3 comments on “John Heathcoat: The industrialist inventor who transformed a Devon town”