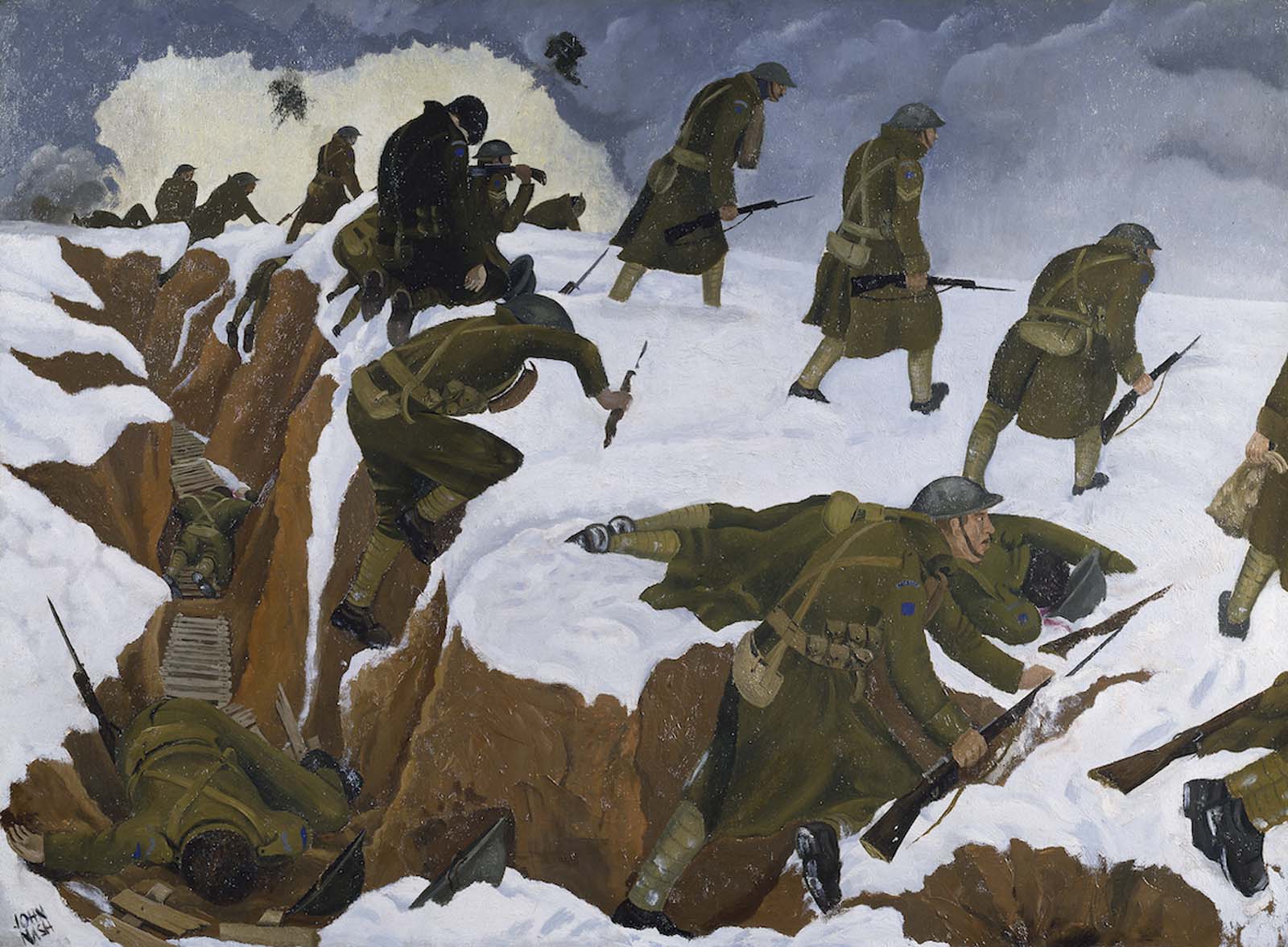 There’s something very ghostly about John Nash’s depiction of the Artist Rifles leaving their trench and making their way across no man’s land on 30 December 1917 during the Battle of Cambrai.

Nash enlisted and served in the First World War with the Artists Rifles in 1916, and of the 80 men in his company who were at Cambrai that day, 68 were killed or wounded in the first few minutes. Nash was one of just 12 who survived.

It’s tempting to see the dark shadows of this terrible experience in the English landscapes that he produced in the subsequent years, and indeed in many of the works featured in The Landscape of Love and Solace, which surveys the life and creativity of one of Britain’s most versatile and prolific artists of the 20th century.

Wood engravings, line-drawings, lithographs, watercolours, and some of Nash’s most famous paintings, including Over the Top and The Cornfield are on display at Tower Eastbourne, moving on to Compton Verney in Warwickshire in the autumn. 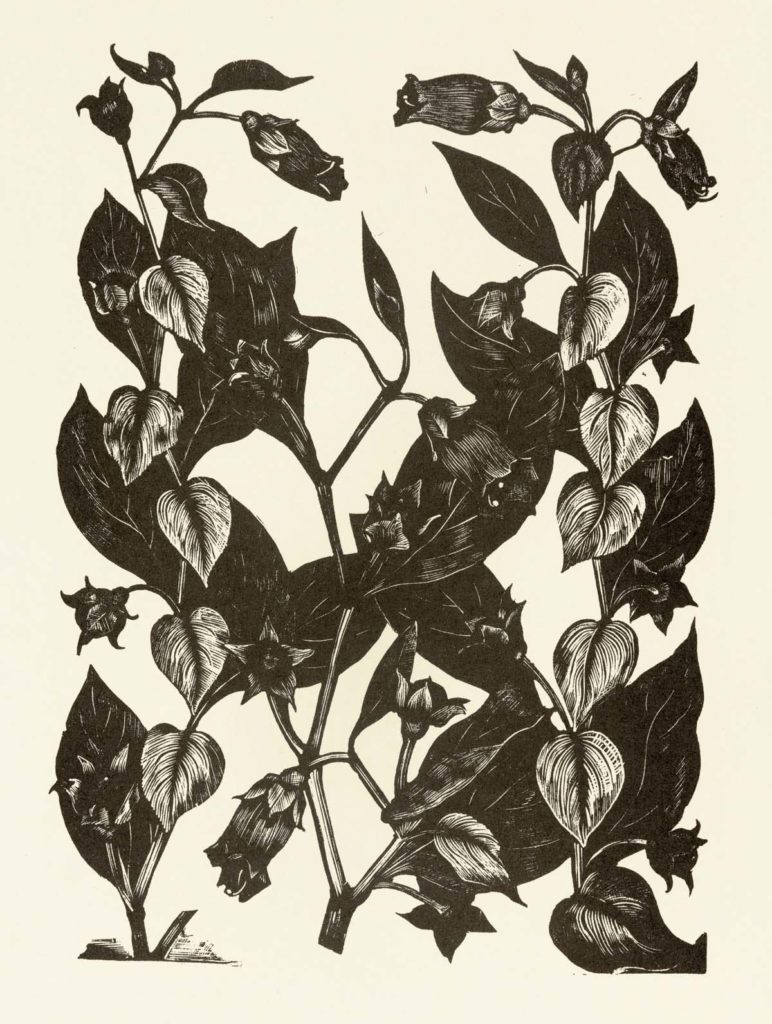 The long shadows cast by the evening sun in the peaceful landscape of The Cornfield (1918, Tate),  subtly indicate that Nash would only paint for his own pleasure after six o’clock, when his work as a war artist (which he became from 1918) was over for the day. It is said the painting was also intended as a form of ‘thanksgiving to survival’ of the Great War.

In the aftermath of the war, Nash often found solace in the different landscapes where he lived and worked, from Buckinghamshire and the nearby Chilterns to the bucolic splendour of the Stour valley, interlinking Essex and Suffolk.

His post war landscapes became so evocative, the art historian Eric Newton said of them: “If I wanted a foreigner to understand the mood of a typical English landscape, I would show him Nash’s best watercolours.”

Newton may have found a perfect evocation of pastoral England, but there remained a kind of bleak desolation lurking beneath the surface of Nash’s work, with brooding skies or the twisting tendrils of trees suggesting the shattered landscapes he encountered in Flanders.

His Harvesting, produced for the school prints series in 1946, at first seems the epitome of the benign prints that evoked the countryside in the British mid-century period, but look again and there is something darkly surreal about the way the farm labourers work to kill the rabbits spilling from the corn as it is harvested.

“The exhibition juxtaposes the work he created during wartime and the intervening years of peace, and contrasts his signature landscapes with wonderful, detailed botanical illustrations, including those he made for a book on poisonous plants,” says Compton Verney’s Senior Curator Amy Orrock whose gallery hosts the exhibition from October 23 2021.

“The Landscape of Love and Solace also touches on his political and personal inspirations giving those art lovers who are less familiar with the life and work of John Nash a great opportunity to learn about this remarkable man and his career.” 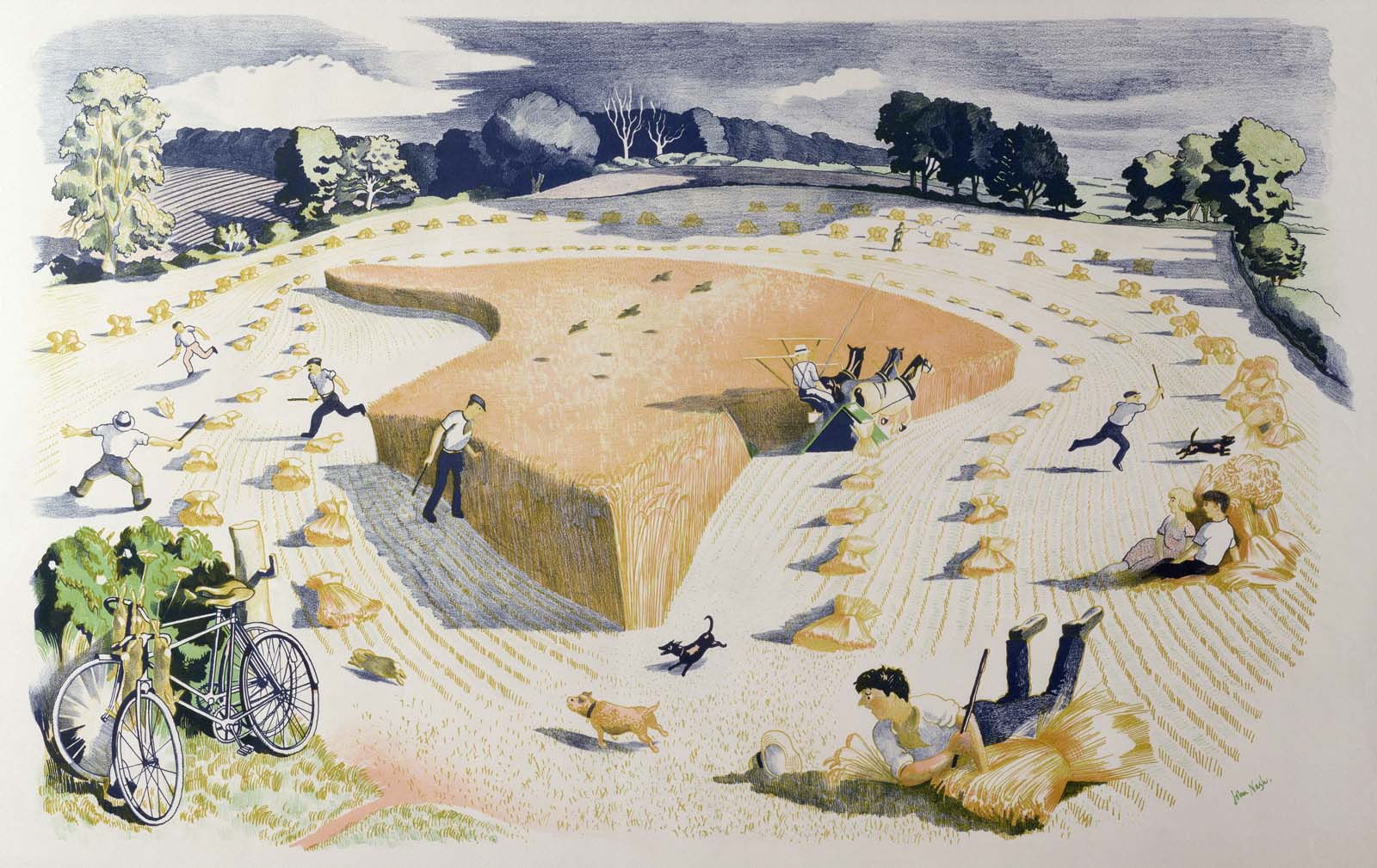 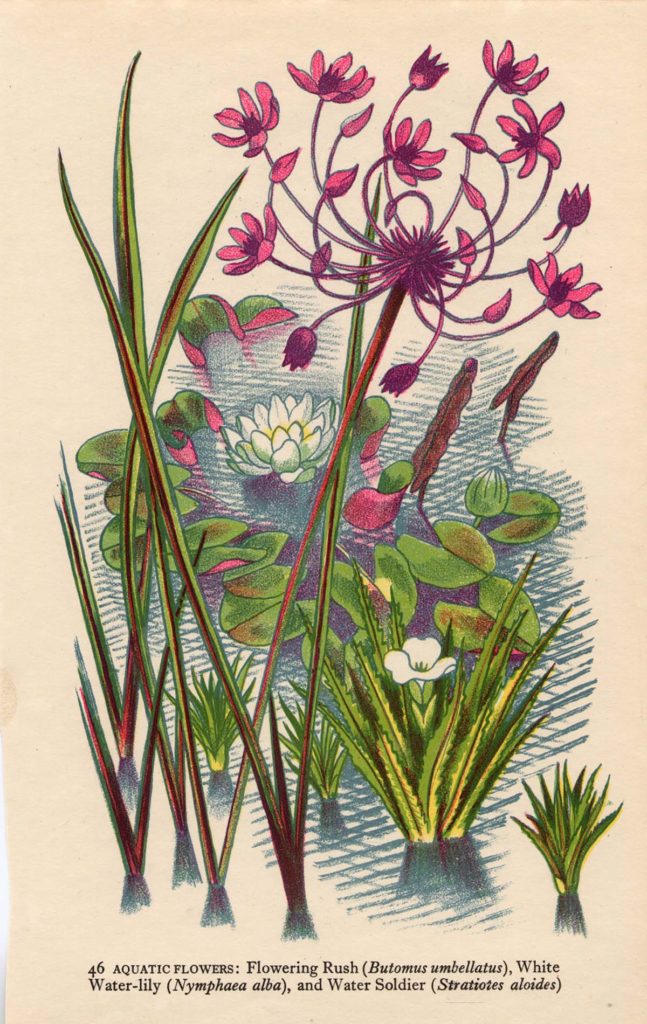 Remarkably, Nash again served as an official war artist during the Second World War and a selection of his works from this era of his career also feature in the exhibition, including Destroyer in Dry Dock (date unknown, Bradford Art Galleries and Museums), A Dockyard Fire (1940, Imperial War Museum) and French Submarine ‘Le Creole’ in Swansea Dock (1940, Government Art Collection).

It is a truth that Nash is sometimes overshadowed by his brother Paul Nash (1889-1946) who, like John, was a war artist during both world wars and produced some of the defining images of both conflicts. But in recent years John Nash’s star has steadily risen.

“John Nash immersed himself in the natural world as the wellspring of his art over a richly productive life,” says co curator Andy Friend, who has written the accompanying monograph. “Under-appreciated in recent decades, this overdue exhibition will introduce his unique vision – and his extraordinary story – to new generations.”

Demonstrating just how prolific he was during his richly productive lifetime, the exhibition features over 170 of his works. The Landscape of Love and Solace also contextualises Nash’s relationship with his wife Christine Kuhlenthal and his passion for gardening.

Nash became renowned in the horticultural world as a judge at Chelsea Flower Show and passed on his skills and knowledge at the Royal College of Art and Flatford Mill field studies centre in Suffolk.

A number of his botanical studies are on display for the first time, having not been publicly displayed prior to the exhibition’s original opening at Towner Eastbourne back in May 2021. The exhibition also features four paintings by his older brother, Paul. Further insights into Nash’s life and work are afforded by photographs and diary extracts.

John Nash: The Landscape of Love and Solace is at Towner Eastbourne until September 26 and at Compton Verney from October 23 2021 until January 2 2022.

Discover the unique delights of Compton Verney, where there’s something for everyone to enjoy. 120 acres of stunning parkland and lake surround an award-winning art gallery, with a family friendly café and gift shop. Escape the everyday to wander through our historic ‘Capability’ Brown landscape, marvel at our world-class art…