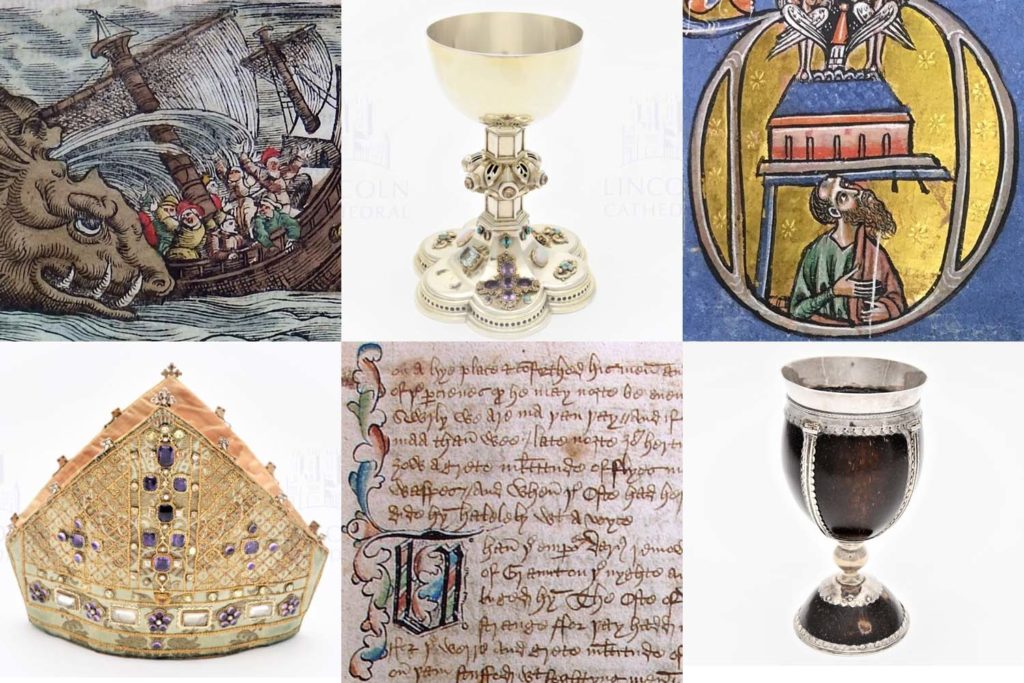 As Lincoln Cathedral puts its collection online, we take a look at some of the highlights

Lincoln Cathedral is known around the world as a holy place of worship and as an architectural gem. One of the finest surviving medieval Cathedrals in northern Europe, it functions as a centre of excellence for its music, library and traditional craft skills and is a place of unrivalled architecture.

Bishop Remigius built the first Cathedral on the site, which was consecrated in 1092 and building continued in several phases throughout the medieval period. For 238 years between 1311 and 1549 the Cathedral was reputedly the tallest building in the world – until its towering central spire collapsed in 1549 and was not rebuilt.

But it’s the cathedral’s collection that takes centre stage in this new online catalogue of objects, which range from chalices discovered during excavations in the Cathedral’s Nave, to unsual vestments and other items from churches across the Diocese of Lincoln.

The online catalogue also contains records for the Cathedral Library collection which contains 10,000 rare early printed books (those dated before 1801), and a collection of 120 “incunabula” (those printed before 1501) as well as much of its modern reference collection.

Here are some highlights:

Authored by the Swiss physician, naturalist, bibliographer and philologist, Conard Gesner, the Historiae animalium is a famous tome that lays claim to being the first zoological work that seriously attempted to describe all known animals.

It was a renaissance-era bestseller, but today it is adored for its fantastical creatures. Some scholars suggest these animals were inserted without the author’s knowledge, although Gesner drew heavily from antiquity – hence the presence of the bishop fish and unicorn. Some of the depictions are however down to the artists working from a description having never seen the real thing. 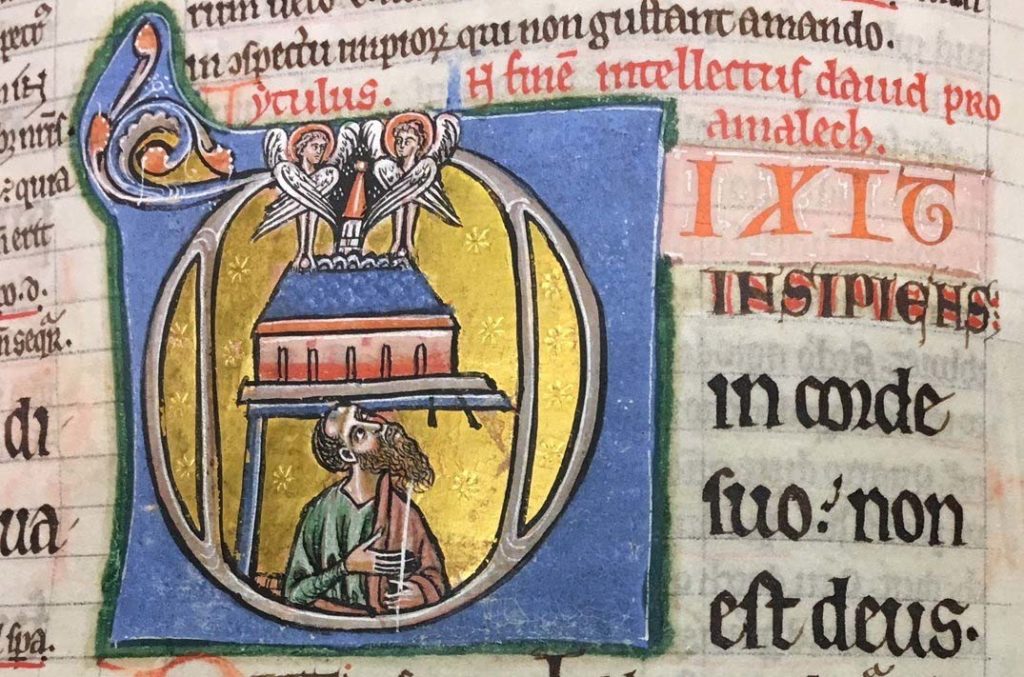 Its author, Peter Lombard, made his name as a teacher at the Cathedral School in Paris, where he became the Bishop. This copy is thought to have belonged to the Abbot of St Benet of Hulme in Norfolk and was given to the Cathedral Library in the seventeenth century. 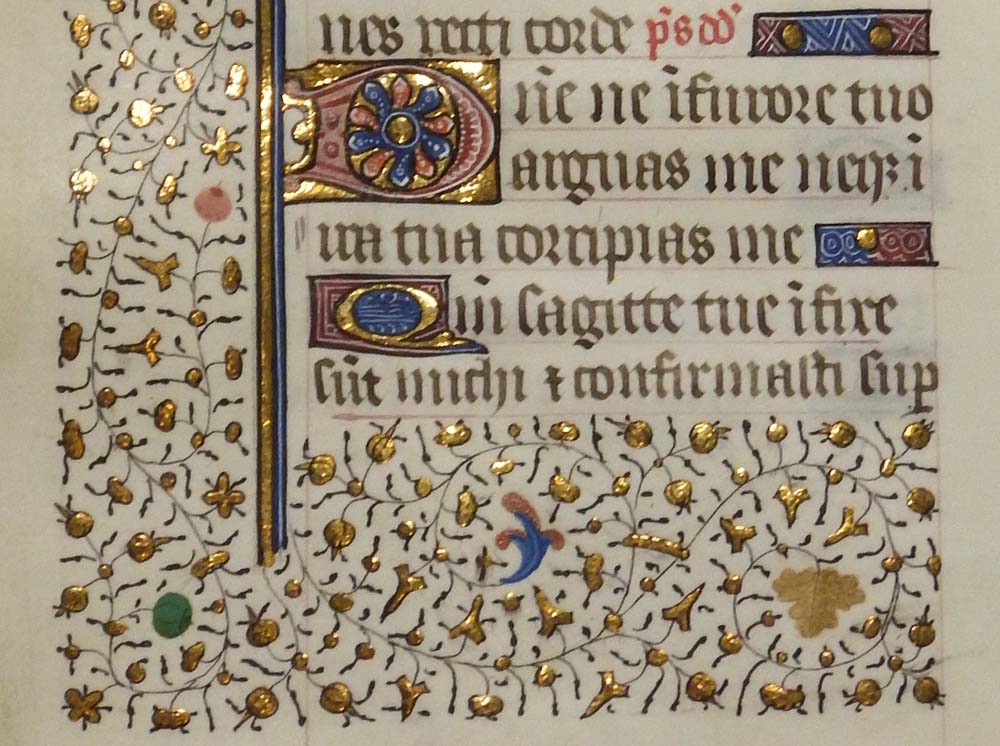 One of the best examples of illumination within the Lincoln Cathedral collection, the Psalmi penitentiales is a rhymed version of the Penitential Psalms dating to the 15th century. This book belonged at one time to William Maurice Wright JP (1873-1956) of Wold Newton near North Thoresby in the Lincolnshire Wolds. 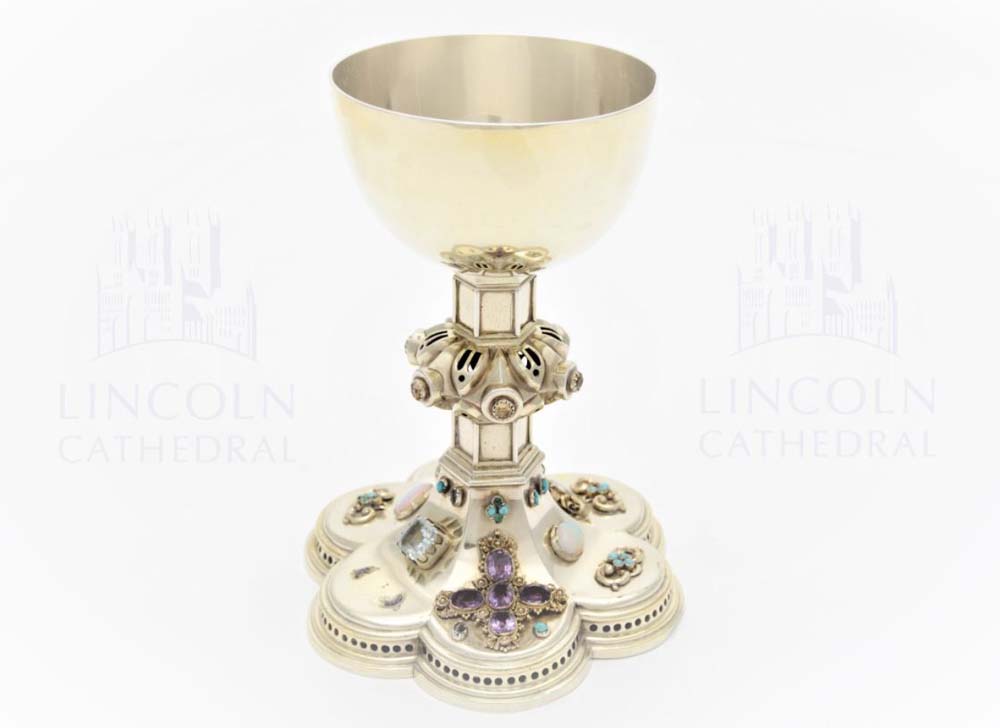 This 1889 silver chalice was designed by famous gothic revival architect William Butterfield. The jewels adorning it are believed to have belonged to the wife of Dean William Butler, who served as Dean from 1885 until his death in 1894. 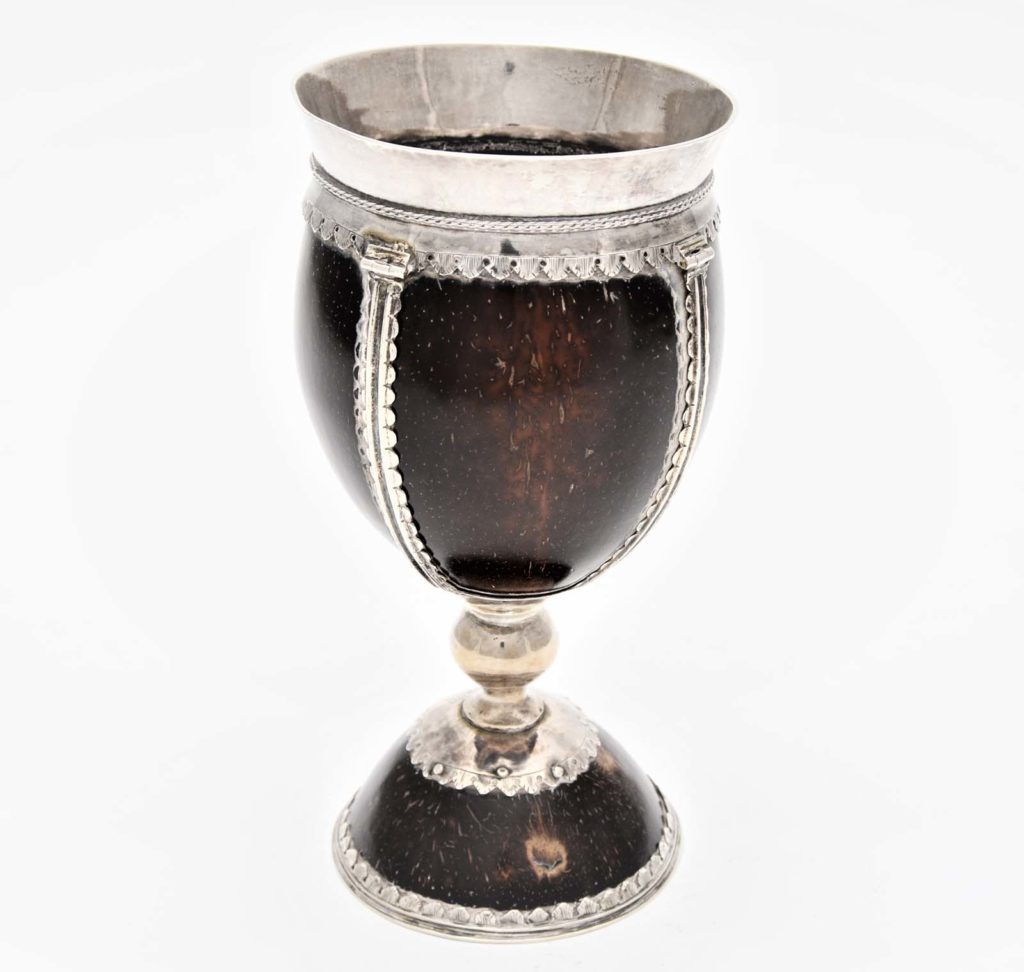 This Fijian coconut cup on loan from Church of St John the Baptist, Yarborough, dates to c.1650 and is a rare example, with both the bowl and foot made out of a coconut shell. It is mounted with a silver stem from a chalice of c.1653. 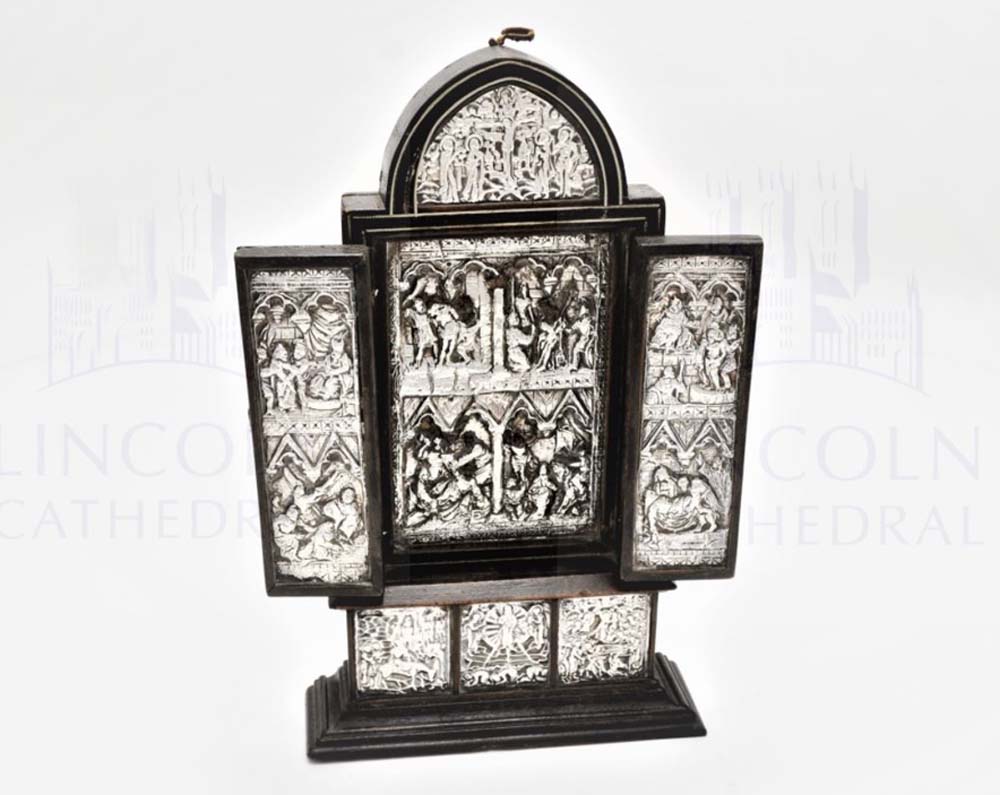 This early 18th Century Peruvian triptych, made from three wooden panels hinged together, depicts eighteen silver scenes from the New Testament. It was used as a focal point or on an altar for prayer and due to its portable size could have been used in a smaller personal chapel or when traveling.

The colourful world of vestments 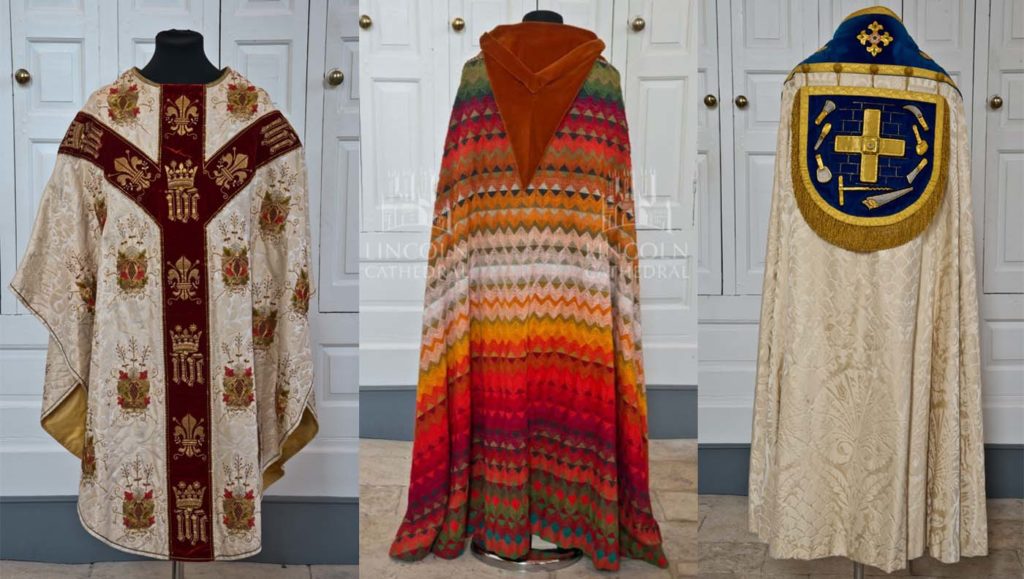 Highlights from the collection of vestments. Courtesy Lincoln Cathedral

(Left) Late 19th Century chasubles in cream damask with a red velvet Orphrey. Decorated with embroidered motifs of Fleur de Lis and stylized IHS’s with crowns resting above the letters. The cream damask has a subtle inlaid floral design with a regular pattern of gold raised thistles flanked by red and green leaves. Small white beads are attached above all the raised embroidered decorations.

(Middle) This cope, which is a vestment for processions worn by all ranks of the clergy, is a vibrant (technicoloured dream) cope made in (you guessed it) the 1970s by the Cathedral Guild of Embroiderers. Woven in a pattern of chevrons and zig-zags in beige, orange, vermillion and green, according to the online catalogue it shows considerable evidence of wear. Let’s hope the wearers coat didn’t annoy their brothers.

(Right) By contrast this silk damask and velvet cope and stole features embroidered masons’ and joiners’ tools and even a section of wall and reinforcing bolt. It was made in the early 21st century and as well as allusions to the building trade, its front boasts a swan and embroidered lilies. 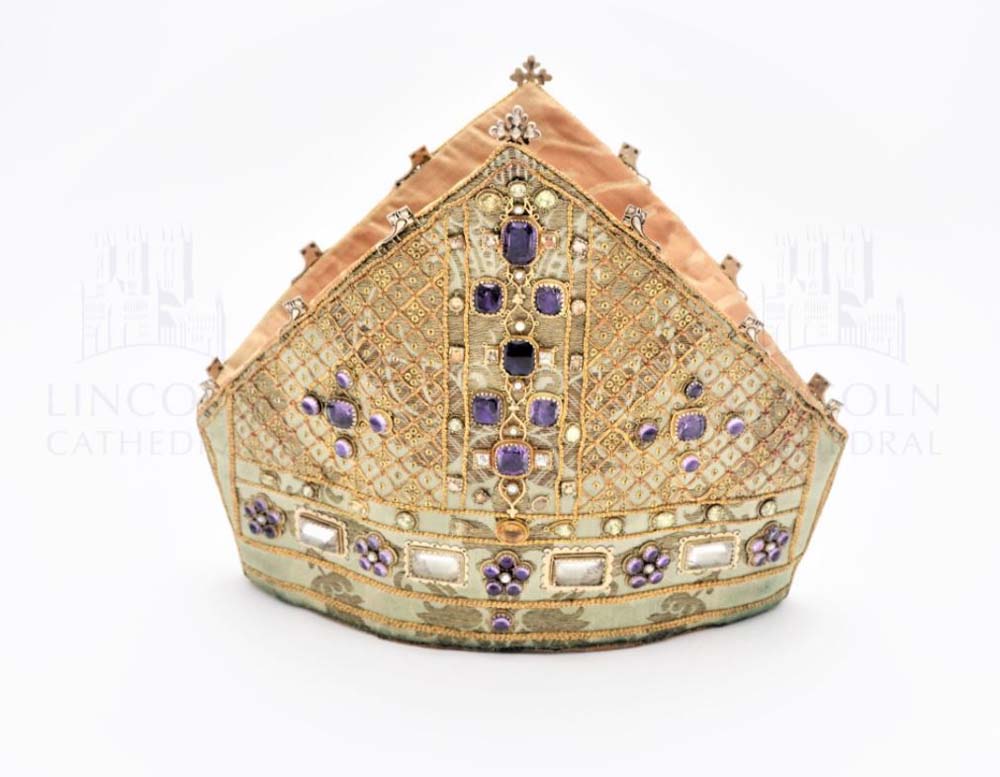 The traditional ceremonial headdress of bishops, this late 19th century ornate mitre features gold lattice work set with jewels including amethysts and amber. The wearing of such ceremonial headgear had waned in Anglican settings since the Reformation, but the mitre saw a revival in the late nineteenth century – making this hat an interesting example of the new trend.

To explore the collection, visit: archive.lincolncathedral.com/