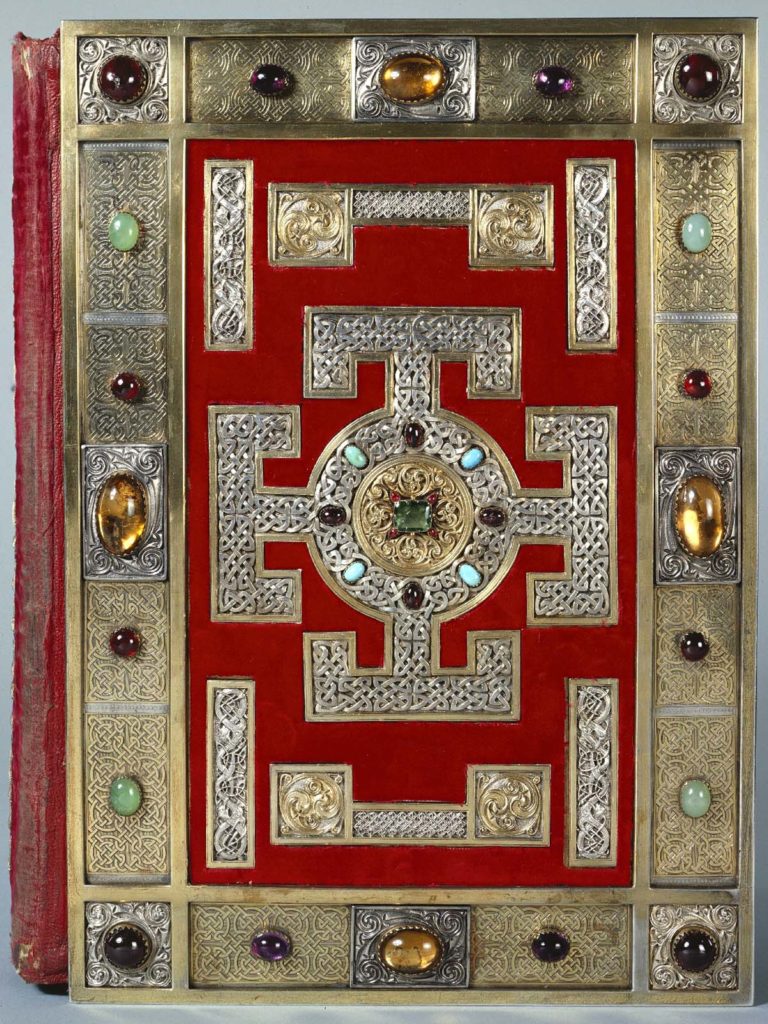 Front cover of Lindisfarne Gospels c. 700 (Cotton MS Nero D IV) The original cover was thought to have been lost during a Viking raid and this cover was made in 1852, paid for by Edward Maltby, Bishop of Durham. © British Library Board

As Anglo Saxon treasures go, the Lindisfarne Gospels is surely up there with the Sutton Hoo helmet and the Staffordshire Hoard.

For many it is the pearl of the Anglo Saxon period, and undoubtedly in manuscript terms, the Gospels is regarded as the best surviving manuscript of its type. Written in insular script (the term insular derives from the Latin for island) across 258 leaves of calfskin vellum, it is a beautiful example of the unique combination of Mediterranean, Anglo Saxon and Celtic stylings that proliferated in the post Roman, early medieval, period.

Recounting the four gospels that tell the story of Jesus and his teachings, it was written and created in Lindisfarne or Holy Island sometime between the 687 death of the Northumbrian monk St Cuthbert, for whom it was written, and that of its original scribe Eadfrith in 722.

Originally a monk at the monastery at Lindisfarne, Eadfirth became bishop in c. 698 and remained there, propagating the growing cult of St Cuthbert with the help of the Gospels he produced, right up until his own death. 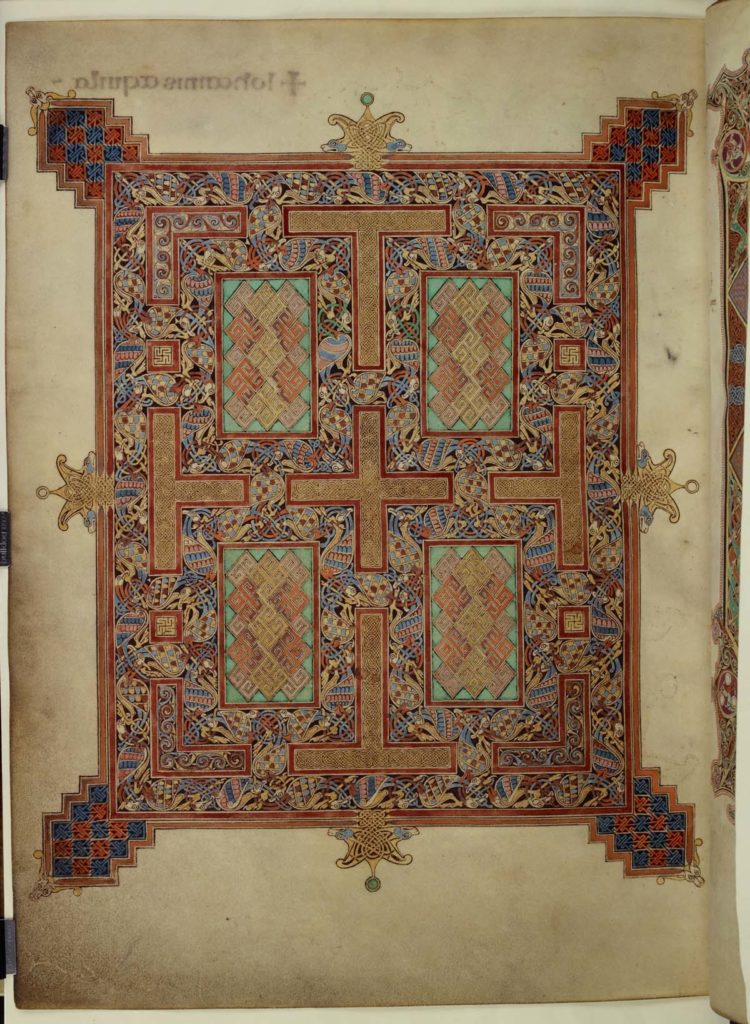 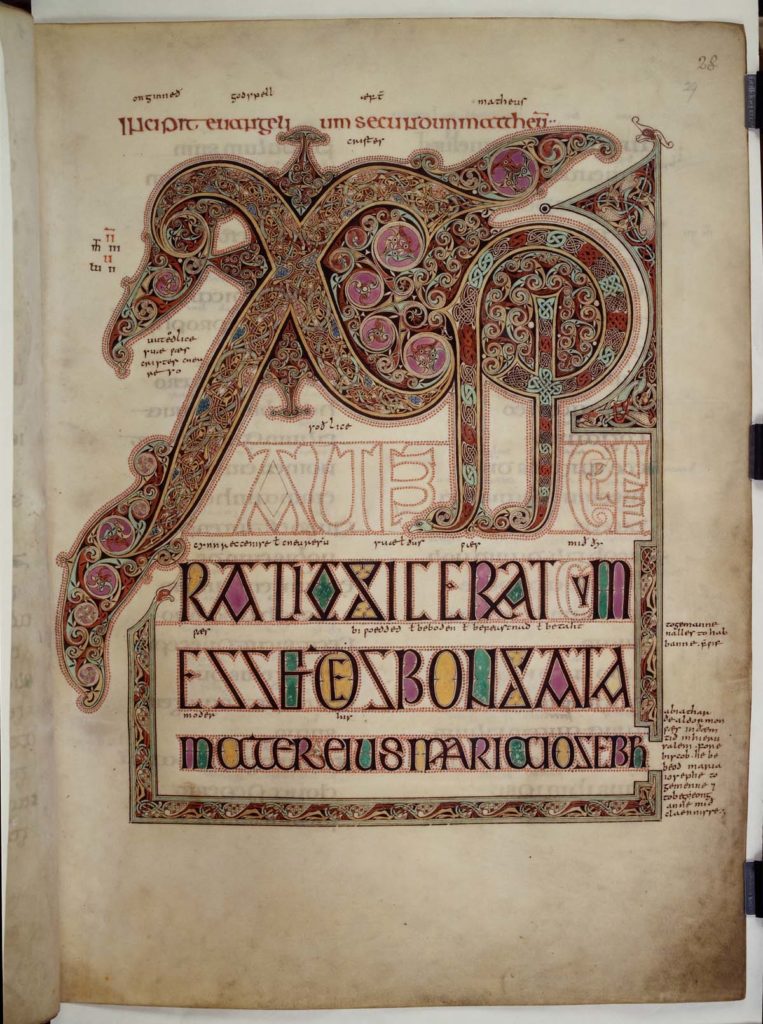 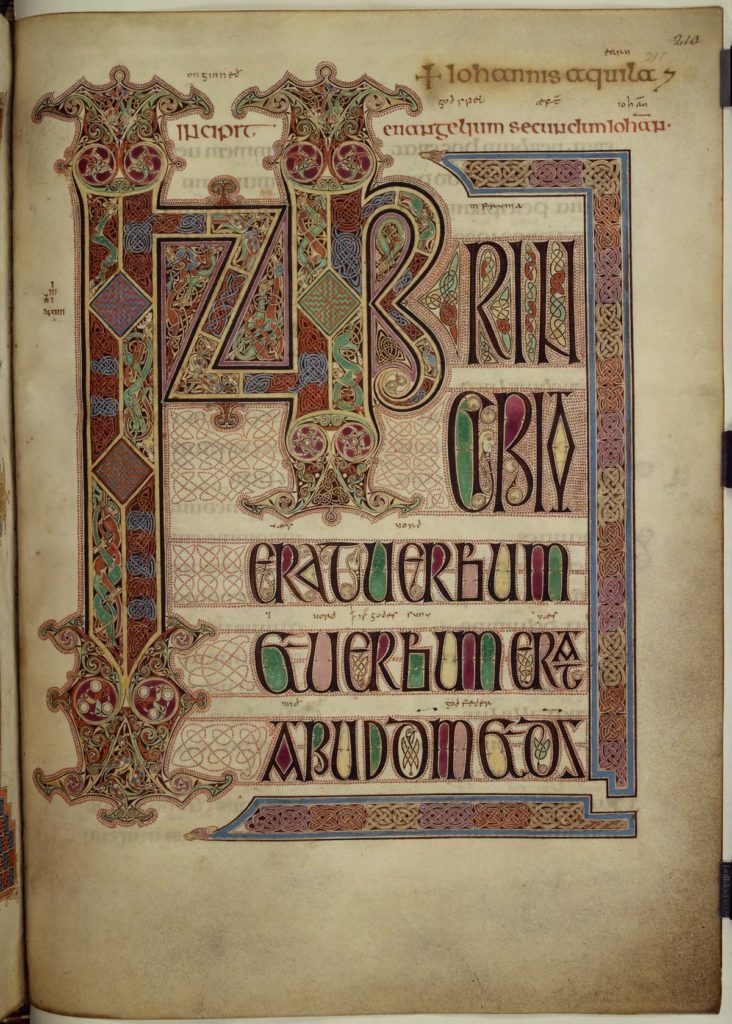 In the late-10th century, an olde English ‘gloss’ was added to the manuscript by the priest Aldred, making it an even more venerated book for local people to engage with – further securing its standing as an important focus for Christian faith and devotion. Handily, Aldred also added a colophon, or inscription, that provides valuable evidence of the manuscript’s original production.

The book, which includes five highly elaborate full-page ‘carpet pages’, which are so-called because of their resemblance to carpets from the eastern Mediterranean, remains the earliest surviving example of the Gospels in English.

There are also full-page images of the four Evangelists and an illuminated Chi-Rho page, where the first letters of Christ’s name are abbreviated and written in Greek as XPI.

Now it is about to take a trip back to the land where it was created to engage with the descendants of the audiences it was originally intended for; the people of North East England.

It will go on display on loan from the British Library in 2022 as part of a high-profile exhibition at the Laing Art Gallery, Newcastle, with a supporting exhibition at neighbouring Newcastle City Library with the aim of attracting visitors from across the North and beyond.

This is the fifth time since 1987 that the Lindisfarne Gospels has been on display in the North East. In 2013 the manuscript was the focus of an exhibition at Durham University, which attracted nearly 100,000 visitors, and told the historic story of the Gospels and its spiritual significance. The manuscript has also been to the Laing Art Gallery twice before, in 1996 and 2000. 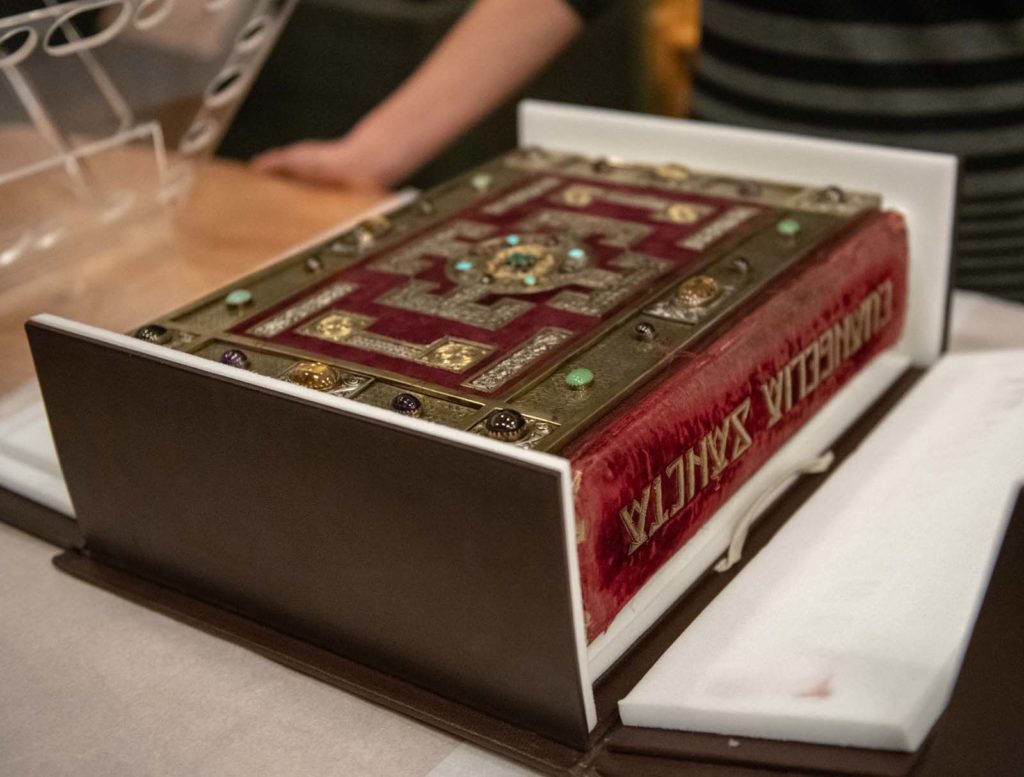 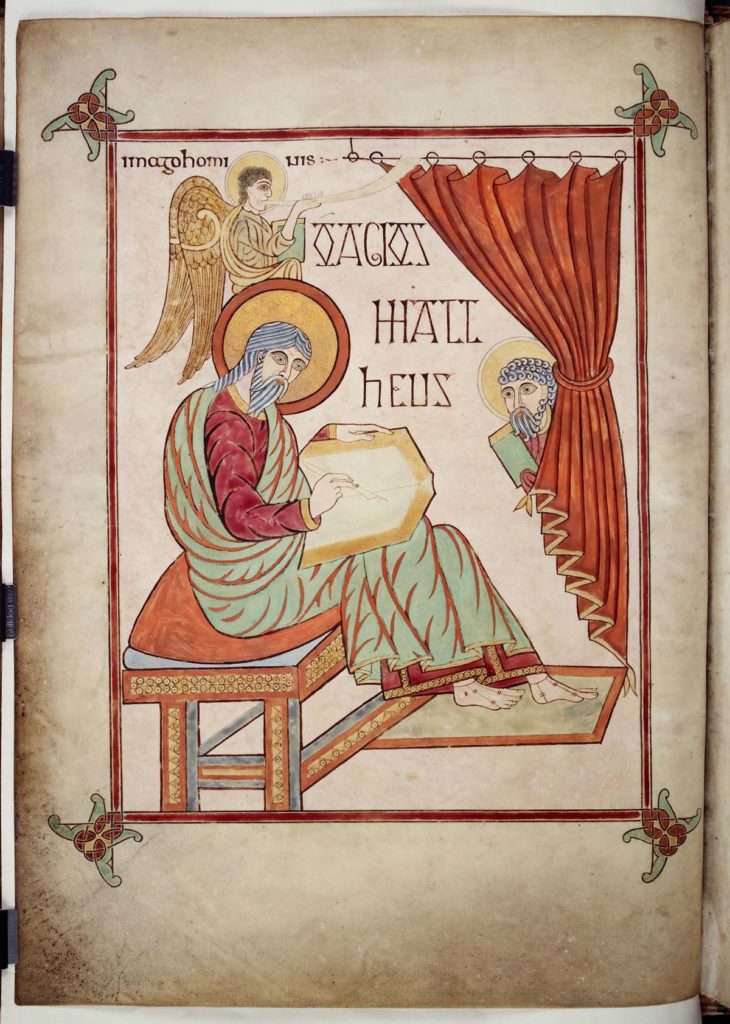 Matthew Evangelist portrait from the Lindisfarne Gospels. © British Library Board 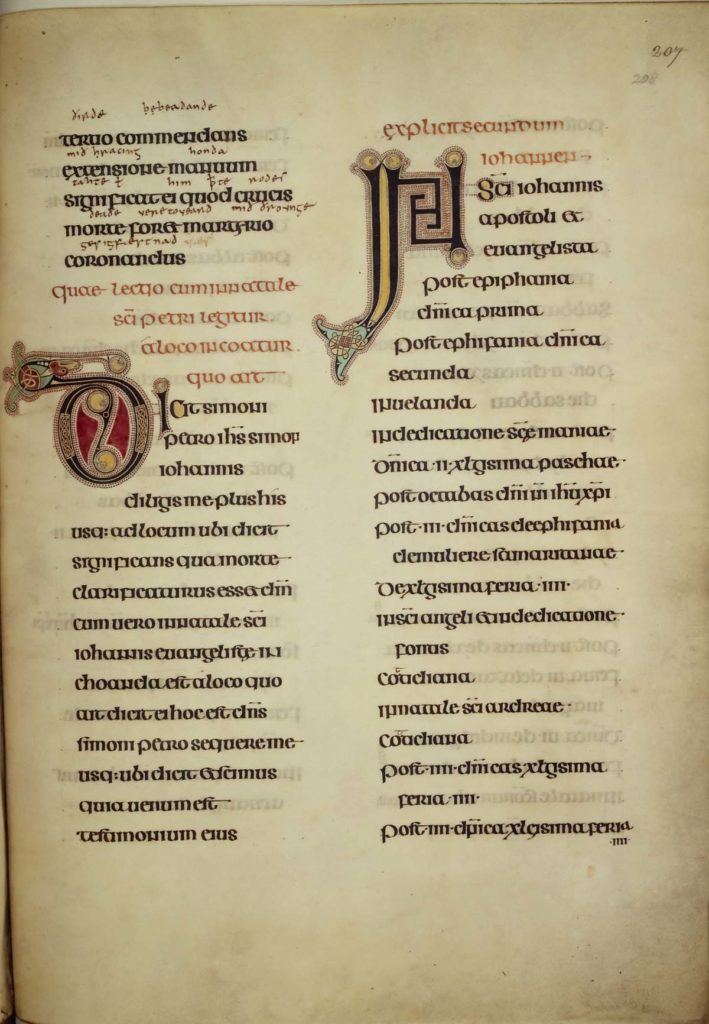 Hosting the Gospels over 20 years since its last visit to Newcastle will be the area’s contribution to the national Festival 2022.

The exhibition will focus on the meaning of the Lindisfarne Gospels in today’s world and how its themes link to personal, regional and national pride and identity.

Working with curators and other experts from the British Library, academics and cultural professionals from across the North East, exhibition curators will explore the ways in which the Gospel book written in Holy Island in the early eighth century helped redefine the identity of its community across 400 years and can bring people together today by inspiring thinking about who we are and where we come from, about identity, creativity, learning and sense of place.

Manuscripts are notoriously difficult to display to the general public – they are precious and fragile and require scrupulous conditions to allow them to be exhibited. Perhaps this adds to their mystique – and makes them a potent source of fascination for people from medieval times to now. 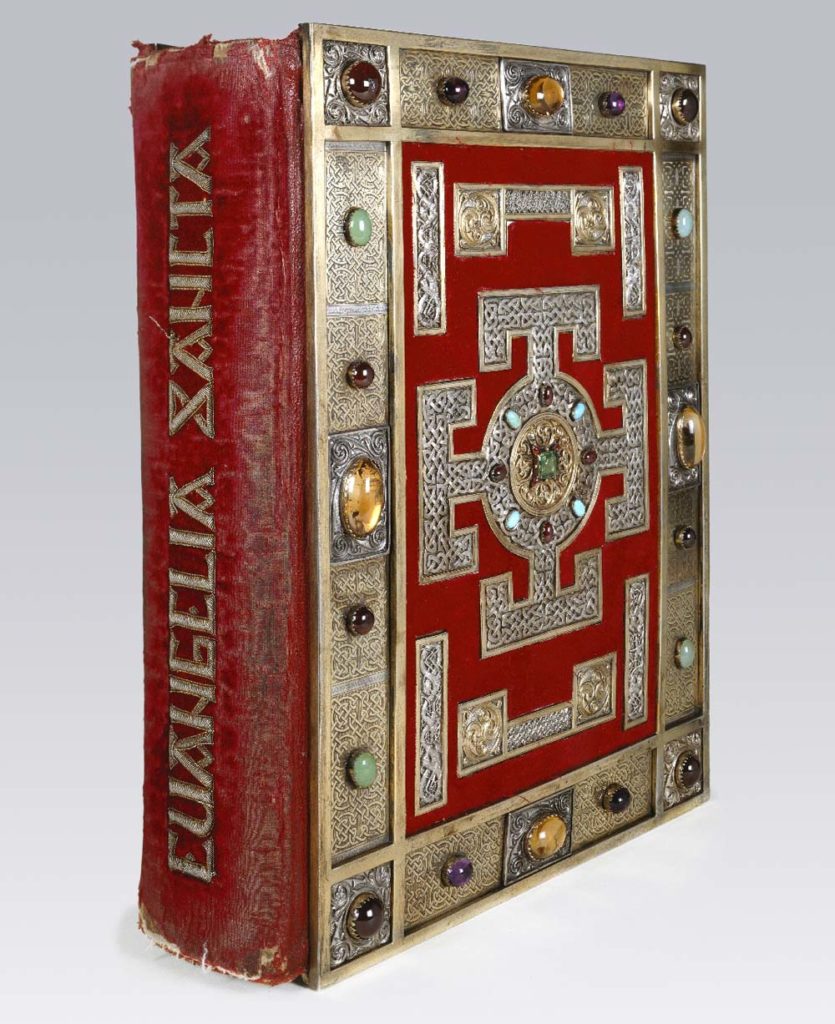