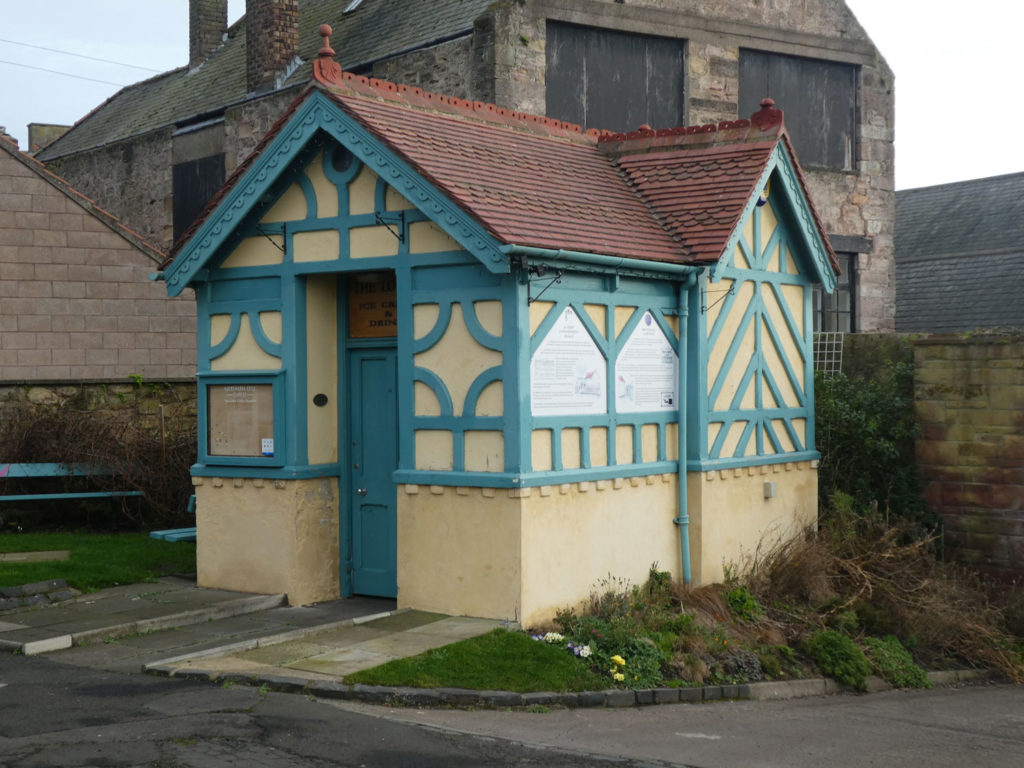 The recent Grade II listing of a pair of Victorian and Edwardian women’s public toilets in Berwick and Seaburn in the North East has offered a reminder of the social history of gender imbalance.

Most toilets in the late 19th and early 20th centuries were designed for men only, while women were restricted by what some historians have termed the ‘urinary leash’ – forcing them to stay close to home.

Although public loos began appearing in workplaces, railway stations, parks, shops, pubs and restaurants in the second half of the 19th century the vast majority of them were strictly for men only.

Ladies lavatories first appeared at the end of the 19th century when businesses realised that women had spending power and accordingly the Bank Hill ladies public convenience in Berwick upon Tweed opened in 1899 with the public conveniences on Seaburn seafront in Sunderland following somewhere between 1901 and 1904.

Both are historically significant as they are each rare early examples of lavatories that catered for women. 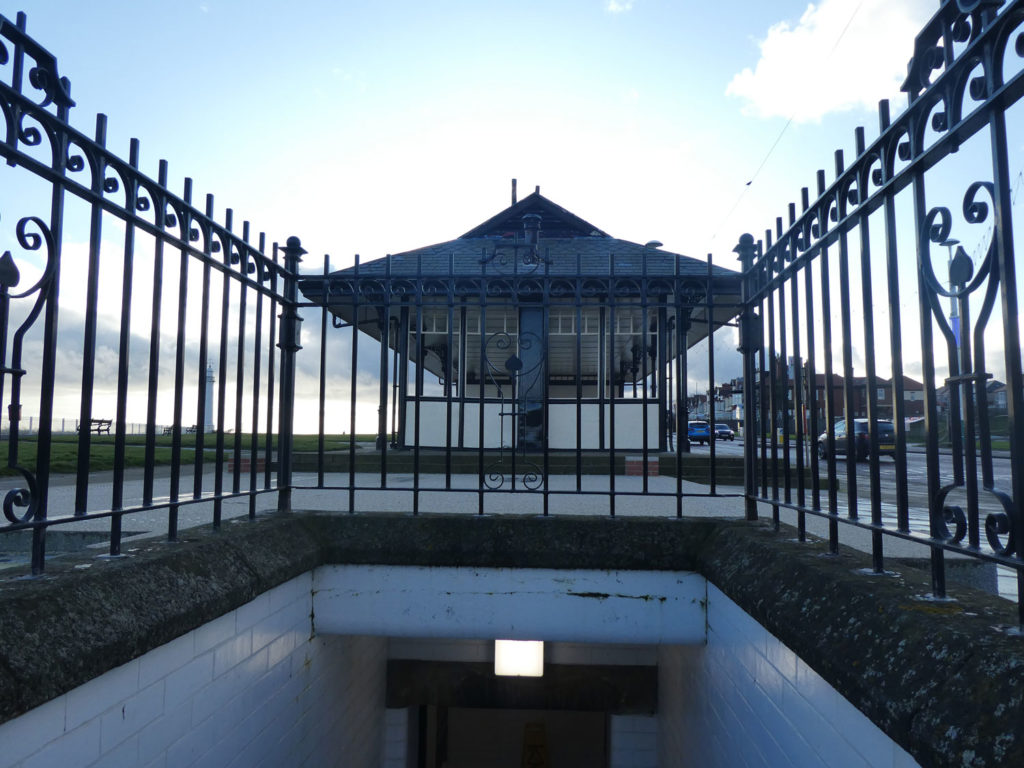 One reason for the disparity is that Victorian ladies were considered by men to be too modest to answer the call of nature when away from their homes. Resembling a miniature rustic cottage, the design of Bank Hill ladies public convenience artfully obscured its purpose to shield sensitive Victorians from the reality of public urination.

When it was opened in March 1899 it cost a penny to use and records show that on its first day it attracted 62 customers. The toilet remained in use until the 1950s and since then has been used as a council storage facility and as an ice cream parlour.

The public conveniences at Seaburn catered for both ladies and gentleman. Situated discreetly underground, they are beside a tram shelter, which has also been listed at Grade II. The lavatories retain many of their original features including hand basins, urinals and toilets, as well as the decorative partitions in the washroom, and cubicles.They closed in the 1960s but were recently restored and opened again in 2018.

Elsewhere the motivation to open Ladies loos was largely commercial. The Ladies Lavatory Company only opened its first near Oxford Circus in 1884 and in 1889 a grand municipal women’s convenience opened at Piccadilly Circus, both in the heart of London’s West End shopping district. 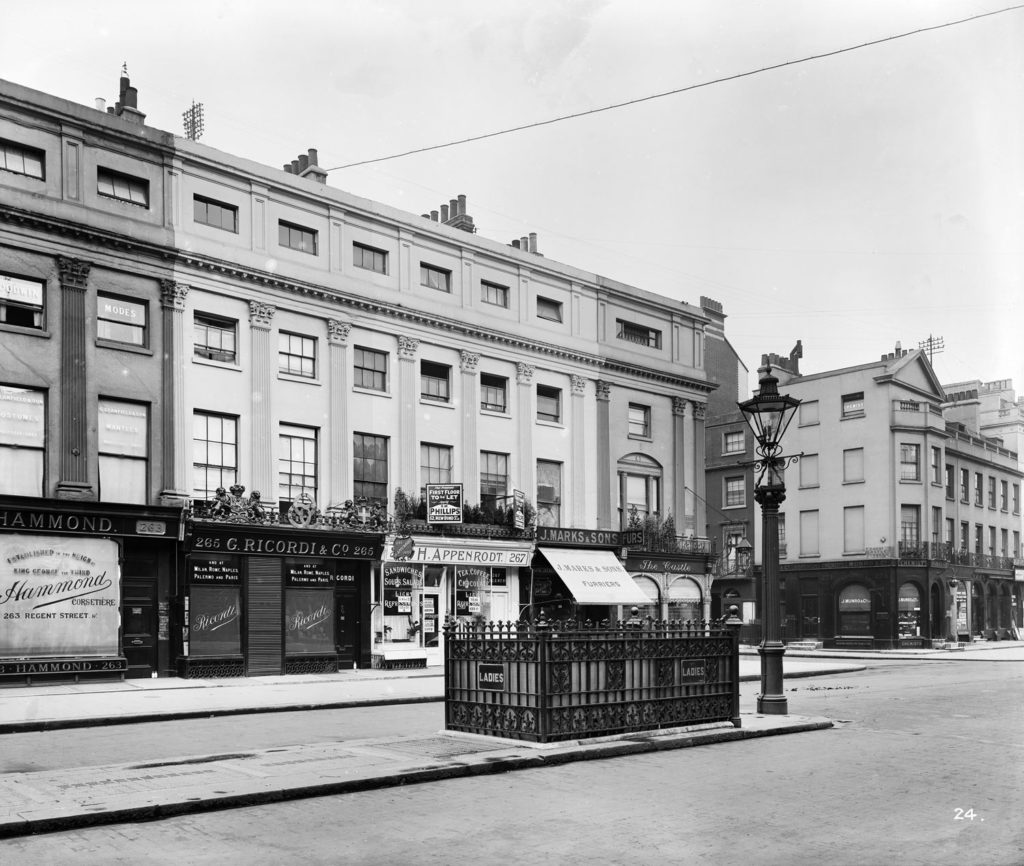 The Ladies toilet in the centre of Regent Street, Westminster, Greater London. Only the ‘ventilation’ lamp standard still exists and is now a Grade II listed structure. The photograph was taken by Bedford Lemere and Company in 1910. Source England Archive BL20981/024.

The authorities and local businesses knew that it made financial sense to keep female shoppers there as long as possible. If they could ‘spend a penny’ when necessary, they would be more likely to spend money in the shops.

Even so, ladies public toilets still remained relatively uncommon until after the First World War, when women were given greater social freedom. But the issue of the urinary leash has now come full circle as finding a public loo is now a problem for both men and women.

Public conveniences are no longer that convenient as 700 council-run toilets have closed in the past decade. Many have been closed while others have been transformed into bars, cafes, clubs and even health spas. 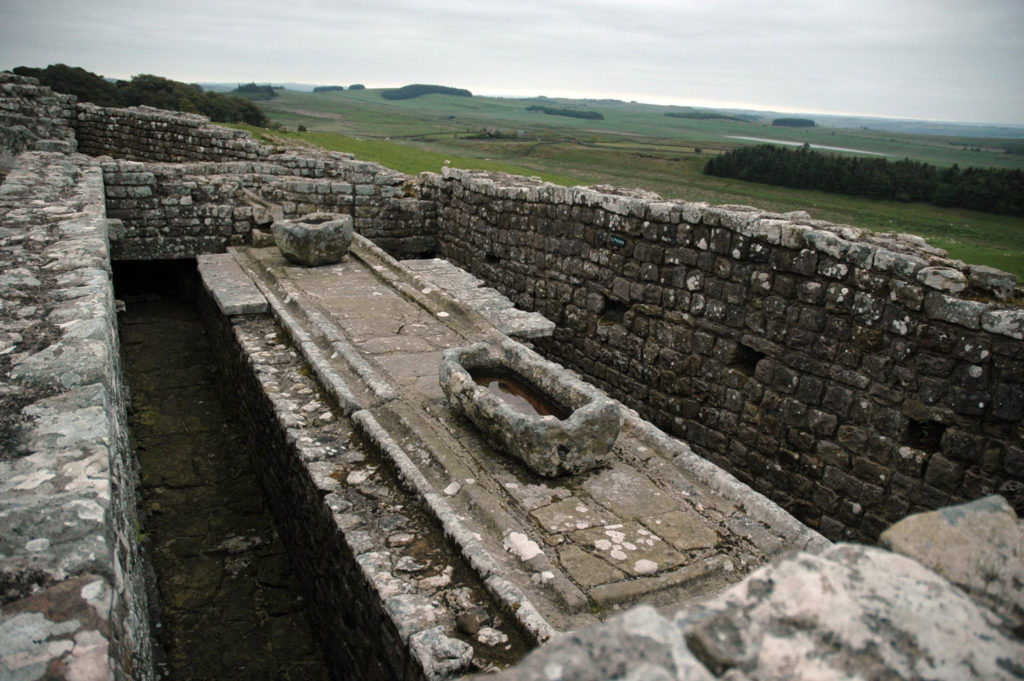 Situated on Hadrian’s Wall, Housteads Fort is home to Britain’s best preserved Roman toilets. The 800 soldiers garrisoned at the fort weren’t given any privacy when they needed to go to the loo. The toilet block, which can still be seen today, was open plan so the men sat next to each other and chatted while they let nature take its course. Toilet paper wasn’t around then and so the alternative was a sponge on a stick, washed and shared by the men. 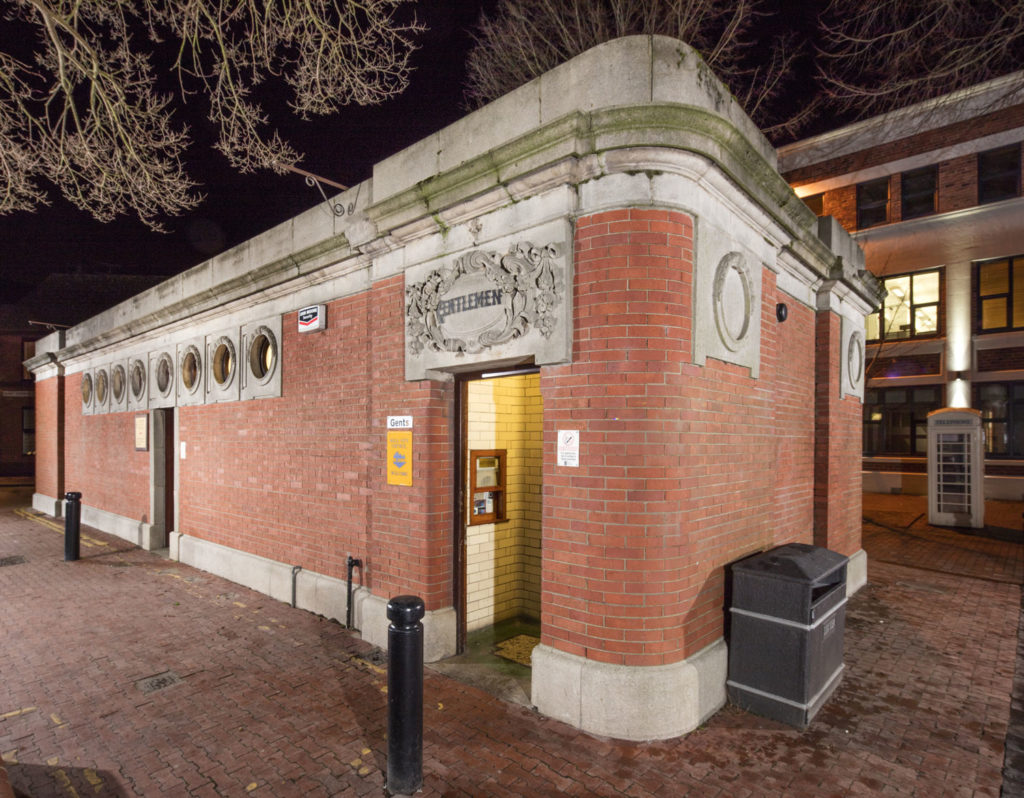 Dating from 1926, these public toilets in Hull are a remarkably complete survival of a facility built for both men and women, when most toilets were built for men only. The joint facilities reflect changing social attitudes, as women travelled out and about more on their own – a testament in part to the freedoms many gained when they contributed to the war effort during the First World War. Constructed of high-quality materials with Art-Nouveau decorative detailing, these toilets were recently named in Lonely Planet’s Top 500 Ultimate Travel List. 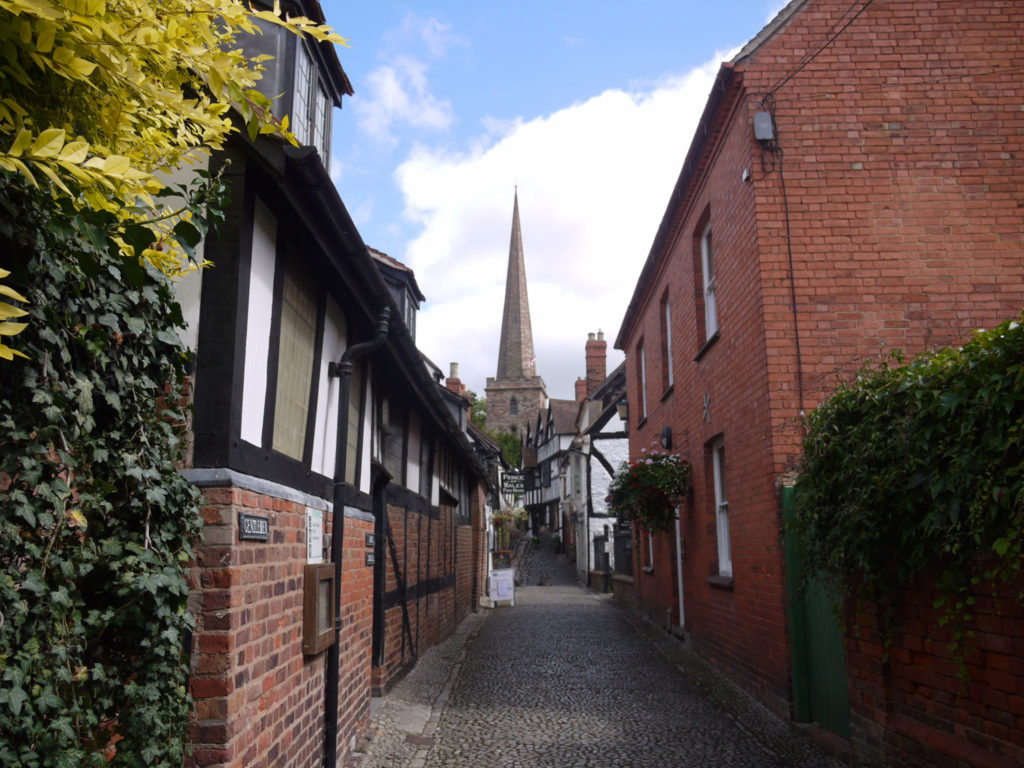 Ledbury in Herefordshire has a charming set of public lavatories discreetly installed in an old range of outbuildings on an ancient lane in the heart of the historic town. Probably of 17th century date (although with newer facilities), the timber-framed buildings, with brick and plaster panels beneath a neatly tiled roof with dormers, blend in so well that many visitors probably pass them by, except those in need. 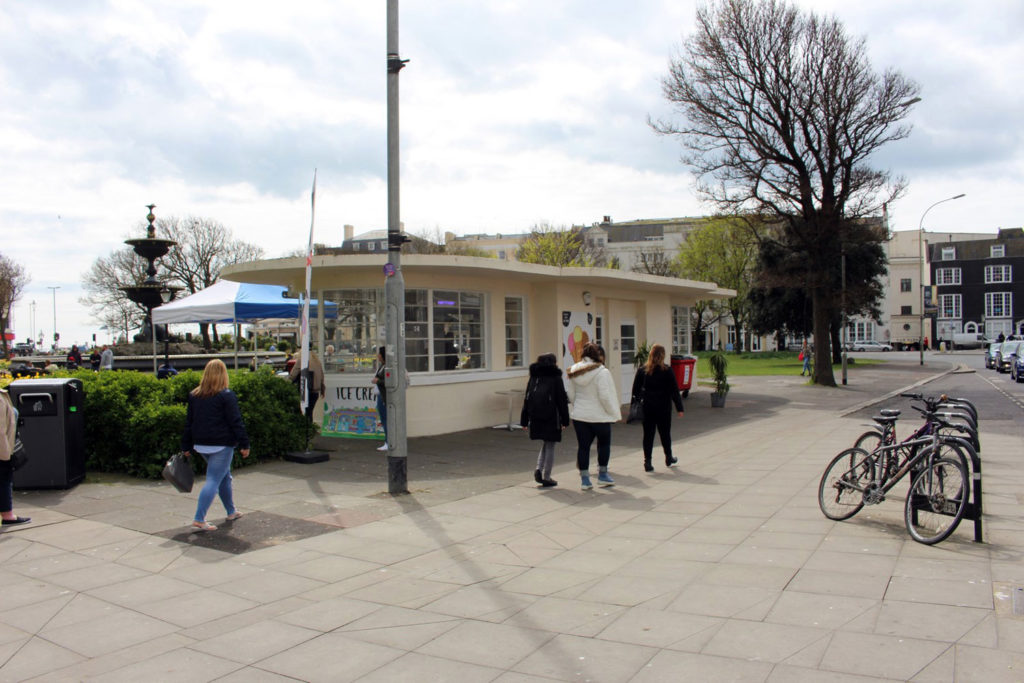 Proudly in use as a café and (still open) public toilets, the 1926 loos on the Old Stein in Brighton were originally designed as a tram shelter and public convenience by the Borough Engineer, David Edwards, in a streamlined art-deco style; this is an architectural style most familiarly seen in London underground stations of the time.