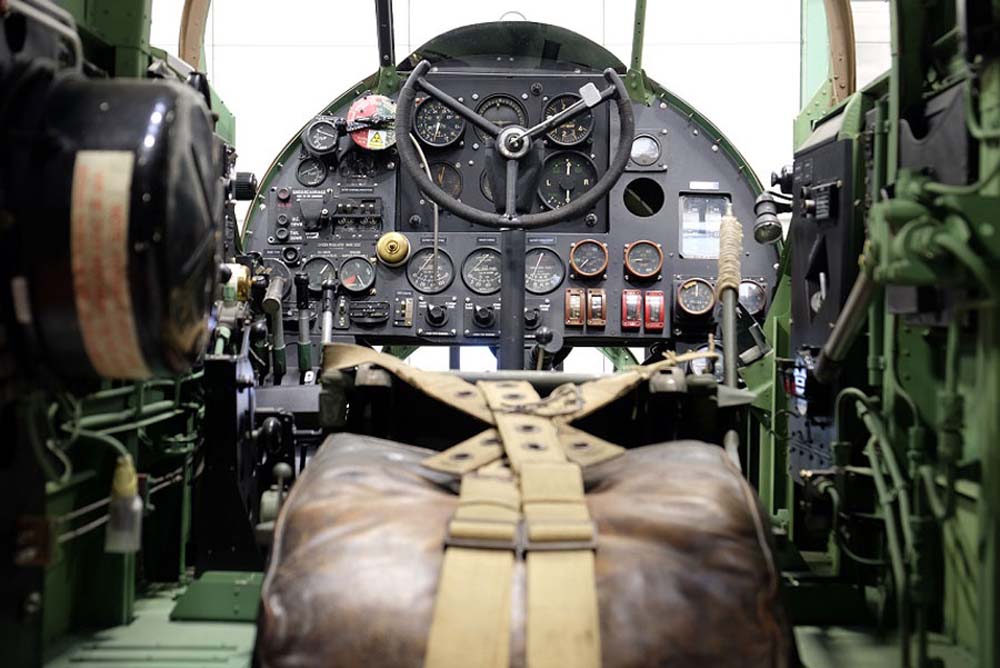 Given the condition of this rare WWII Hampden bomber when it first arrived at the RAF Museum in Cosford, visitors to the Museum’s Michael Beetham Conservation Centre open week should be impressed.

One of the award winning centre’s longest running projects, the aircraft was recovered from an Arctic crash site in northern Russia in 1991 after laying undiscovered on the Kola Peninsula for almost half a century.

The night it was shot down (September 5 1942), the aircraft was one of nine lost out of 32 that departed Sumburgh, Shetland Islands, heading to northern Russia to provide protection for the Arctic Convoys. It was a costly night in terms of both human and aircraft loss.

In this particular Hampden, three crew members died, two survived and became prisoners of war and the aircraft suffered significant damage. Now the rare British twin-engine medium bomber they flew in that fateful night is being slowly and lovingly brought back to life. 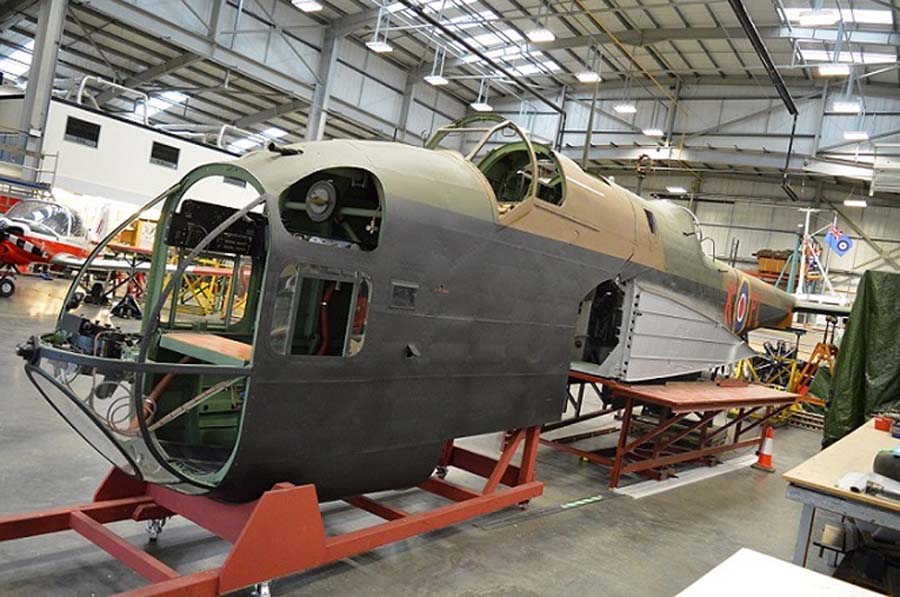 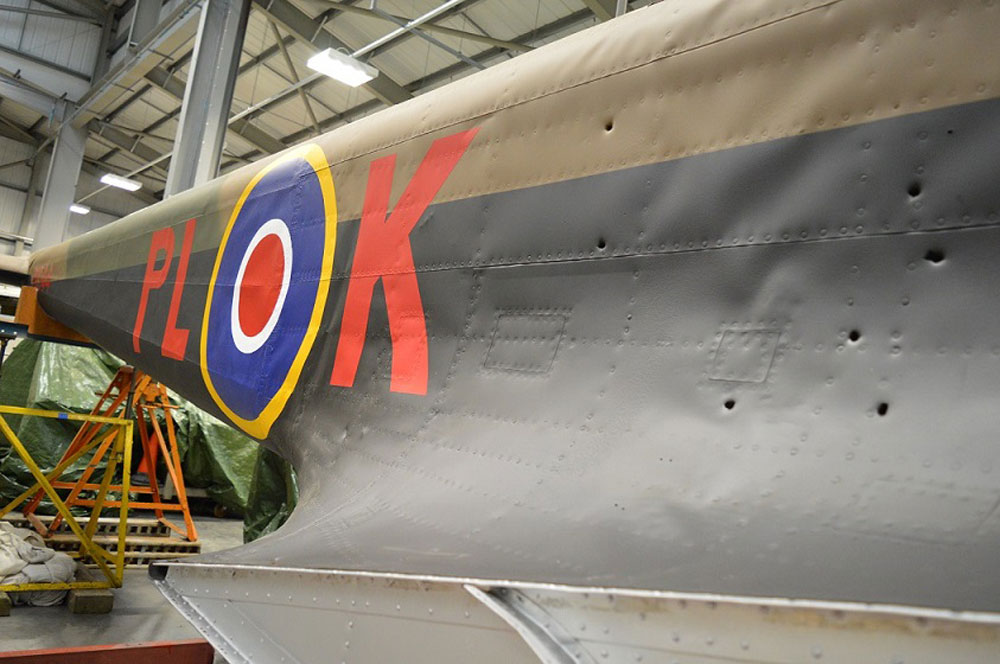 The bullet holes that brought the Hampden down. Courtesy RAF Museum Cosford

One of only three examples of the type remaining (the other is on display in the Canadian Museum of Flight in Vancouver and there’s a nose section in East Kirkby in the UK) Hampden P1344 has undergone a major transformation and, for the first time since the mid-1940s, the public in the UK can see a complete fuselage section.

The aircraft now has all four fuselage components fully assembled, attached and painted in its original 144 Squadron colour scheme, together with the original serial number.

Since it was last on public view some 12 months ago, restoration on the badly damaged airframe has progressed significantly and the unmistakable Hampden silhouette can now be seen. Damage to the tailboom was structurally too much to repair and a new tail was built in-house. Within the last few weeks this newly constructed section has been painted by the Museum’s Surface Finish Technician and attached to the original rear fuselage.

As well as the bullet damage the stricken bomber endured across its fuselage at the hands of Luftwaffe night fighters, visitors are able to see the cramped conditions the five man crews endured inside one of the RAF’s early bombers of World War Two.

The Hampden was known as the “flying suitcase” by RAF crews who knew well the dangers of flying in them – and getting out of them if they were shot down. 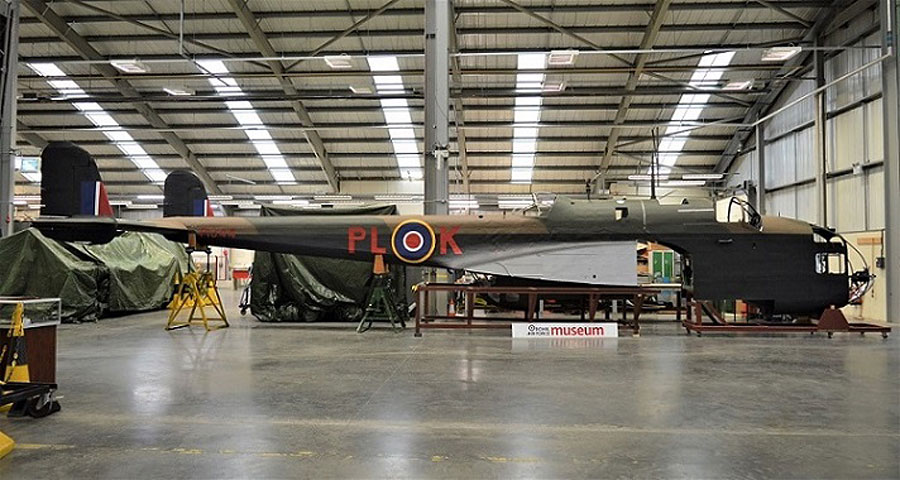 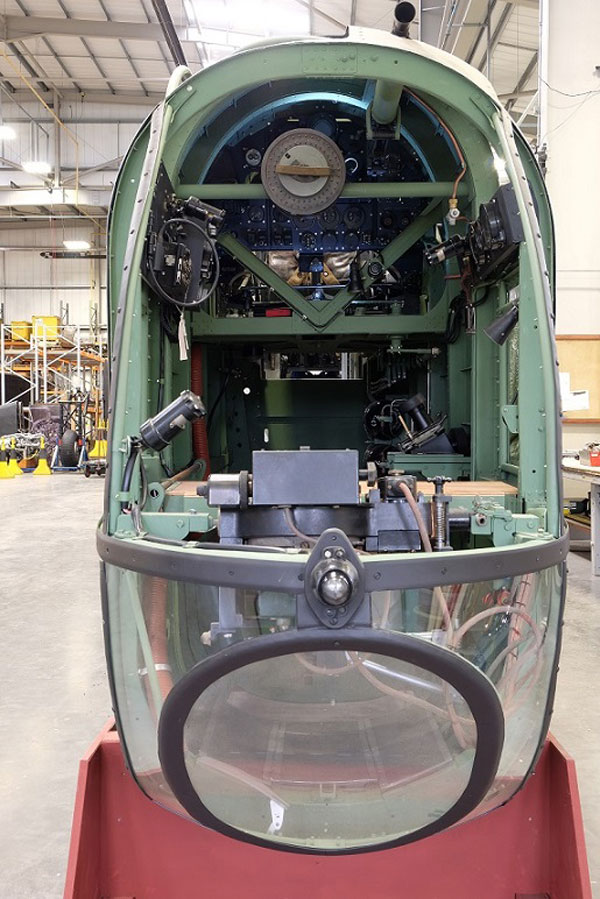 But even though visitors are closer to getting a better idea of the conditions RAF crews experienced flying perilous missions in the Hampden, there’s still more work to be done.

“We’re delighted with how the Hampden, a lesser known aircraft of the RAF inventory, is finally coming together after all these years,” says Darren Priday the RAF Museum’s Conservation Centre Manager. “We are currently trying to source an original rear undercarriage and tail wheel, but if one can’t be found it will be replicated and made in the Centre. The aircraft has been populated internally with items from the Museum’s reserve collection and the next twelve months will see work commence on manufacturing flying control wires to enable the elevator and rudder to move as well as fabricating new bomb bay doors.

“Hampdens, along with Wellingtons, which we also have here at the Centre, bore the brunt of the early bombing campaign over Europe. They played a vital role in the RAF and our nation’s history.”

The only surviving Special Duties Lysander

As well as the chance to see the Hampden and other long term projects including the Wellington bomber and the remains of the German Dornier bomber recovered from Goodwin Sands off the coast of Kent in 2013, the Museum is also revealing the latest on its restoration of a World War Two Westland Lysander.

The Westland Lysander III (S.D.) is the only surviving Special Duties variant of its type and will soon be back on display in Cosford’s hangars.

Upon arrival at the Museum some 22 months ago, the Lysander underwent an in-depth inspection and condition assessment and work was carried out on a few minor repairs. The damaged fabric outer skin was removed and focus was put into the aircraft’s engine, preservative treatments were removed and mechanical systems were cleaned and lubricated and are now functional again.

The recovering of the fuselage has been done using traditional Irish linen and original doping techniques and is currently being primed ready for its 161 Squadron Special Ops colour scheme to be applied within the next few weeks.

The Lysander restoration has been a largely volunteer-led project with a team of 4-6 volunteers working two days a week on the cleaning and mechanical elements, whist the new outer skin and paintwork has been applied by the Museum’s skilled Surface Finish Technician. 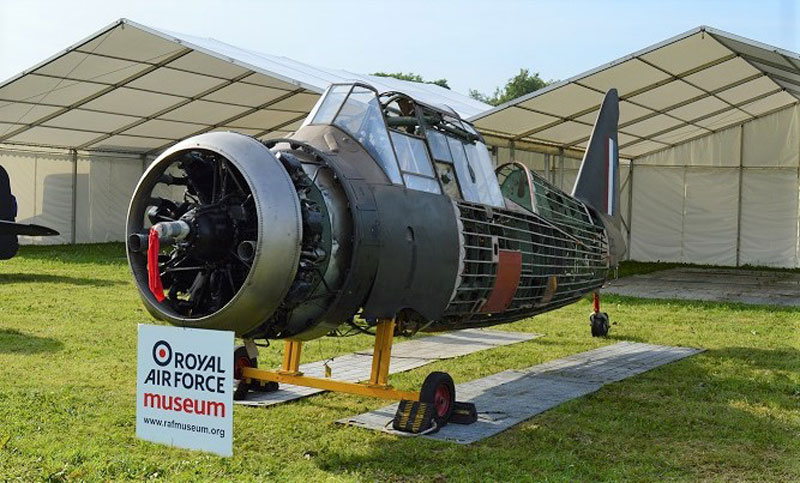 The Lysander as it appeared at the RAF Cosford airshow in 2017. 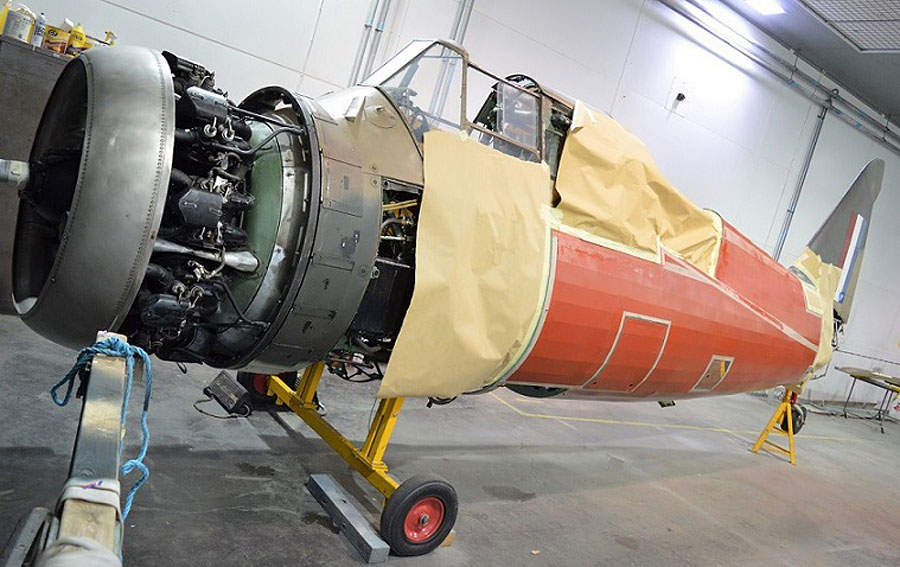 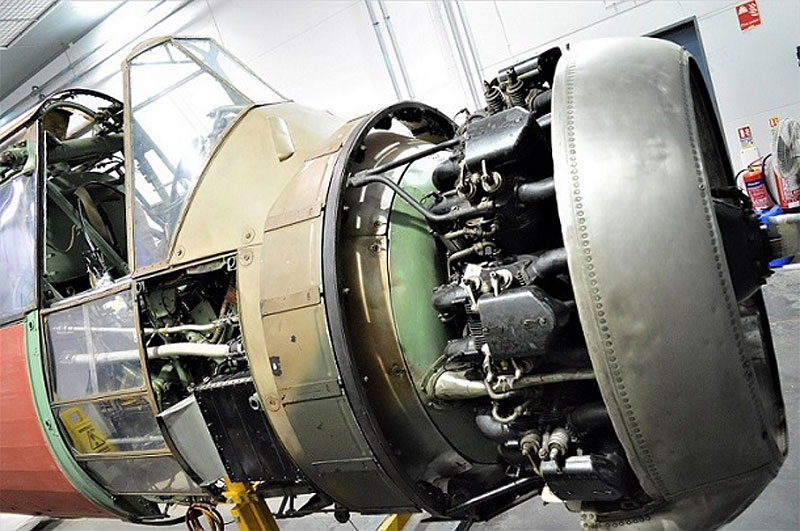 “During the inspection phase, we discovered some original fabric and we’ve taken the decision to conserve this item and keep the original paintwork,” said Priday. “Once the fuselage section is complete, work will begin on attaching the ailerons and other flying controls which have already been covered in Irish linen; these will go through the same doping and paint process as the fuselage.

“The metal cowlings will be resprayed before being refitted. Over the next few months our team of volunteers will be focussing their efforts on the wings. This work will all be on display to the public in November and in the New Year the undercarriage will be refitted as part of the rebuild phase which is expected to take upwards of 12 months.”

The Lysander was designed to operate closely with the Army and had a remarkable performance, which enabled it to get into and out of extremely small fields.

A radical change in Army co-operation tactics meant that its lasting fame is not in this role but as a Special Duties aircraft ferrying Allied agents in and out of enemy occupied Europe. Four Lysander squadrons went to France in 1939 and despite some notable successes the Army Co-operation units suffered extremely high casualties – over 170 Lysanders were sent to France but only 50 of them came back.

After their withdrawal from France, they patrolled the coastal areas of south and east England as an anti-invasion reconnaissance measure. Late in 1940 they began air-sea rescue duties in the Channel and North Sea – because not only could the Lysander spot airmen in the sea and bring surface vessels to them, it was able to drop a lifesaving dinghy and supplies.

The Museum’s example, serial number R9125 first became operational with No 225 Squadron in 1940 as a coastal patrol and photo reconnaissance aircraft, based along the south coast of England.

It took on the Special Duties role with No 161 Squadron in 1944 and was operational for a further two years until they became obsolete from the RAF in 1946. For a brief period in 1961 the aircraft was placed into storage at RAF Cosford and ten years later it was acquired by the Museum and placed on display at its London site, where it remained on display until its recent move to back to Cosford. 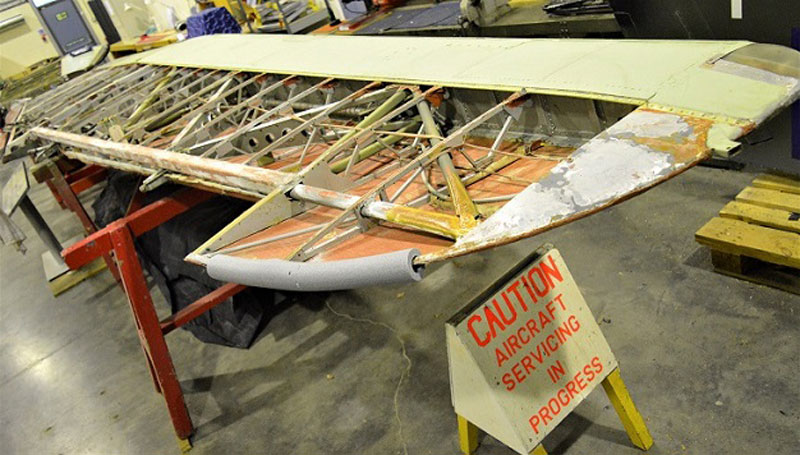 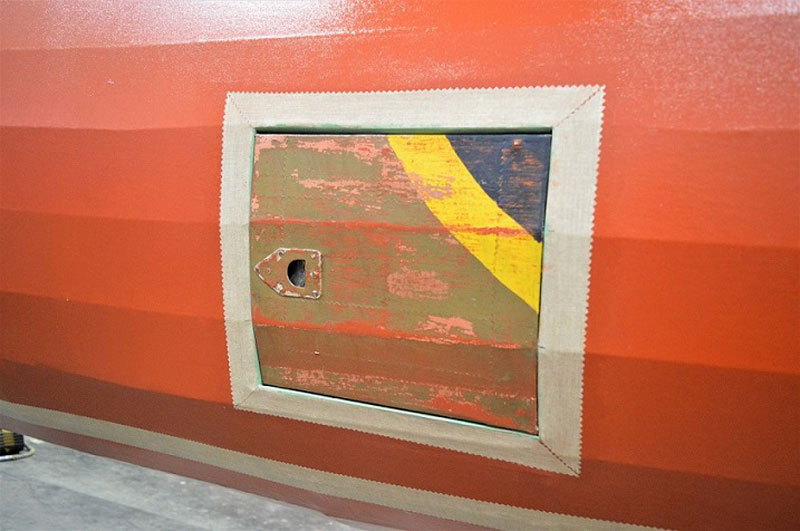 Some of the original paintwork on the Lysander’s fuselage. Courtesy RAF Museum Cosford

The Conservation Centre is open until November 18 2018 between 10.15am and 1.00pm each day and admission is £5.00 per person (children under 16 are free and must be accompanied by an adult).

The Museum’s other hangars are be open from 10am until 4pm and entry to the Museum is free of charge. For further information, please visit the Museum’s website www.rafmuseum.org/cosford.

The Royal Air Force Museum Cosford is home to over 75 historic aircraft and offers a fun, entertaining day out for the entire family. Aircraft on display include the world’s oldest Spitfire, the unique TSR2 and the mighty Vulcan bomber to name but a few. Plus, visitors can now see…