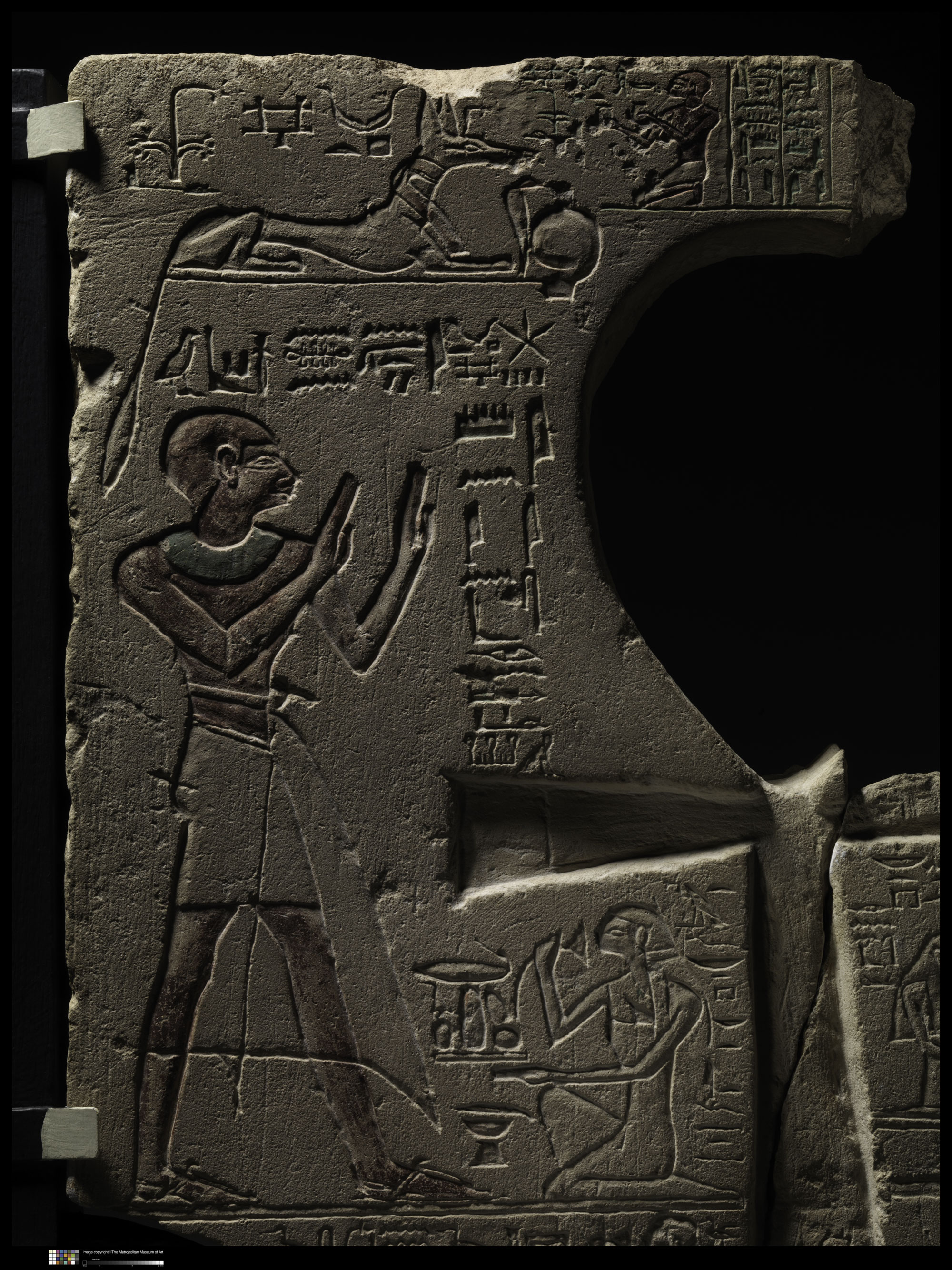 The stela of Amenysoneb Photo © Metropolitan Museum of Art

Dr Gina Criscenzo-Laycock, Curator of the Garstang Museum, University of Liverpool, explores one of the many ancient Egyptian treasures held by the museum – a rare and magical stone stela commemorating a priest from the Middle Kingdom

This funerary stela, commemorating Amenysoneb, a priest from the Middle Kingdom of ancient Egypt, is a functional yet magical item.

The ancient Egyptians believed that the soul needed the same things to survive in the afterlife that a living person needed during life. As it quickly became apparent that you couldn’t fill a tomb with enough food and drink to last for all eternity, they developed magical means to provide for the soul instead.

One of the primary ways this was achieved was by use of the ‘offering formula’. It was believed that if someone were to speak the text aloud, the souls of the people mentioned in the stela – its owner and family members – would be magically provided with food, drink and provisions to sustain them in the afterlife.

The offering formula was written in tombs, on coffins, and on a type of object we call a funerary stela. This was an object, made of stone or wood, on which inscriptions and images were carved or painted. These stele were set up in prominent locations, in the hope that someone walking past, if they could read, would read the words aloud and provide food for the soul. 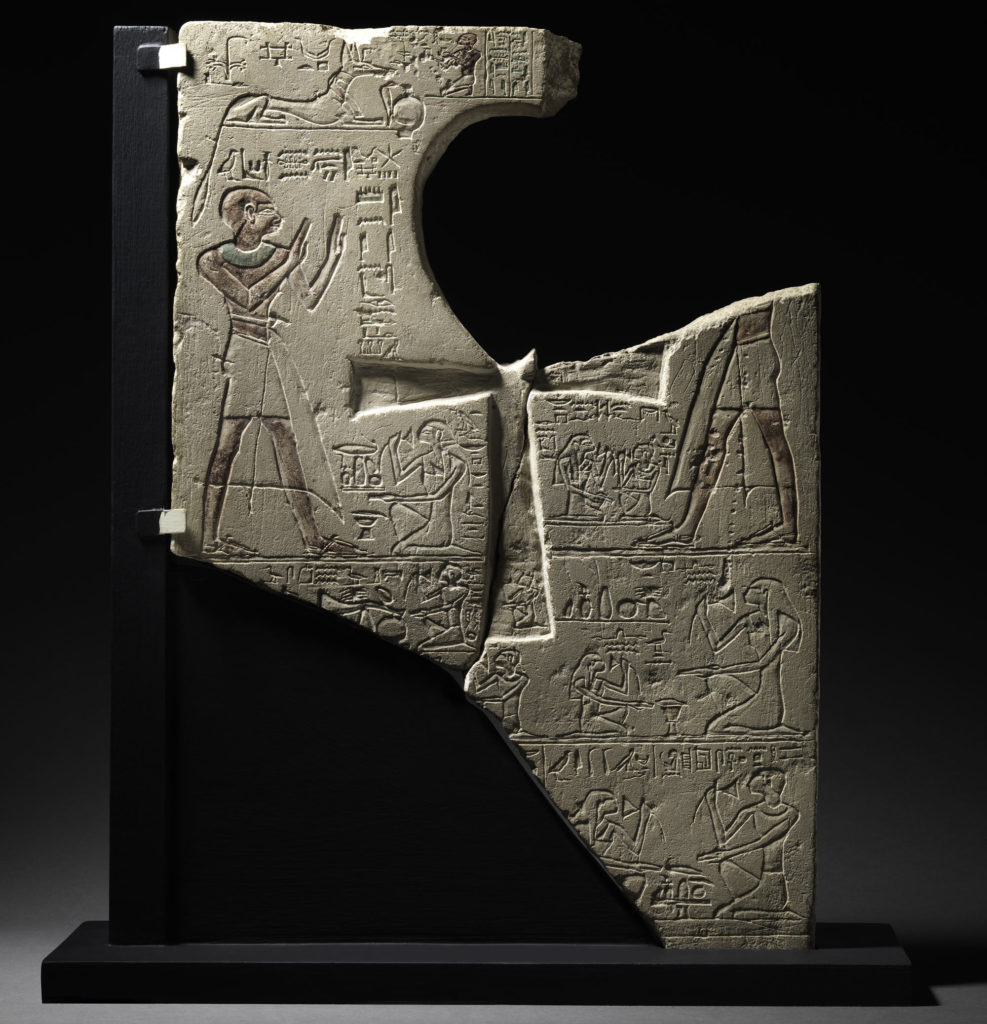 As with most stele of this type, our object records the name of its owner, and titles which he held in society, together with details of his family members. Most stelae are one-side, although as you will see from this example, occasionally they can be decorated on both sides.

It was found by Professor John Garstang in 1907 at Abydos in Egypt, a site which is part way between Luxor and Cairo. Abydos was a really important area during the Middle Kingdom (around 2055-1650 BC), when it was believed by the Egyptians to be the burial site of the god Osiris, the ruler of the afterlife.

As a result of this connection, there is a lot of funerary material from Abydos. There would have been numerous religious festivals and processions at the site – and probably a lot of craftsmen making and selling stele there. It would have been quite a busy space, although the actual ritual landscape is quite complicated for archaeologists to work out because the site was in use for thousands of years, leaving complex deposits.

Thousands of individuals are commemorated in stelae found at Abydos. Some would have lived and worked in the local area, while many would have come from other places from around the country specifically to participate in the festivals, and set up their stelae along the processional routes in the hope that future participants would read them aloud, and thereby provide for the stelae owners in the afterlife.

The sheer quantity of stelae present at Abydos perhaps explains why it became common practice to erect them inside small mud brick structures, known as cenotaphs. It seems likely that the structure would have given the stela within more prominence to participants of the festivals, in addition to providing a level of protection from damage. 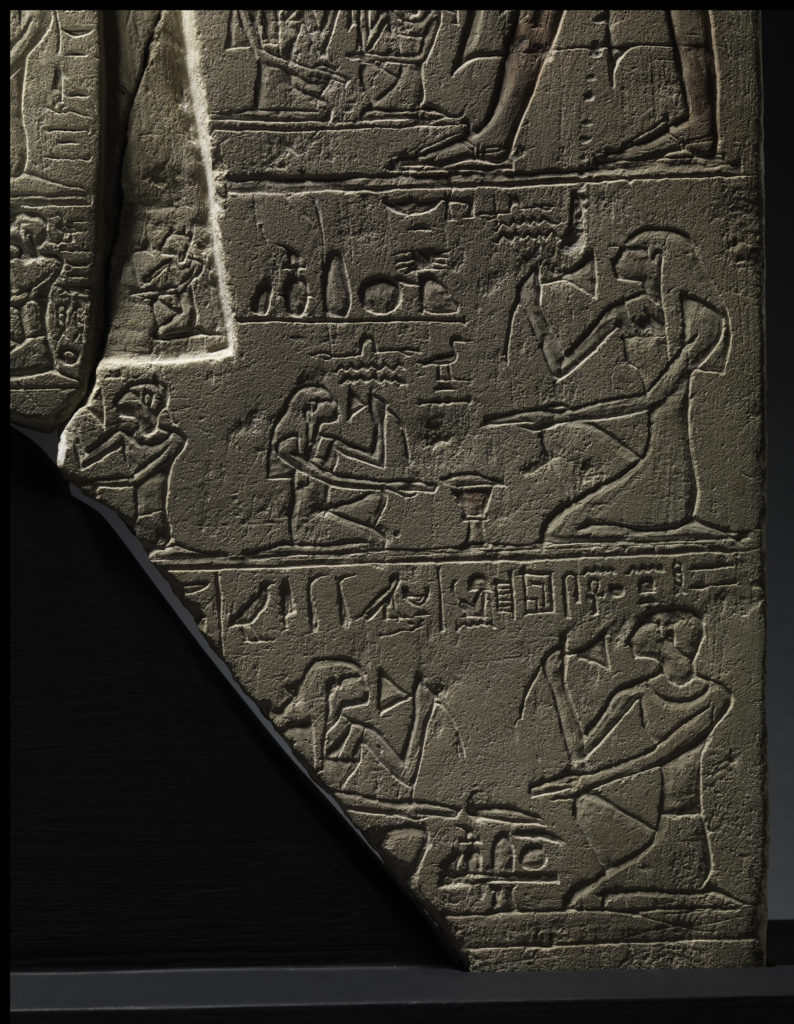 The stela of Amenysoneb © Metropolitan Museum of Art 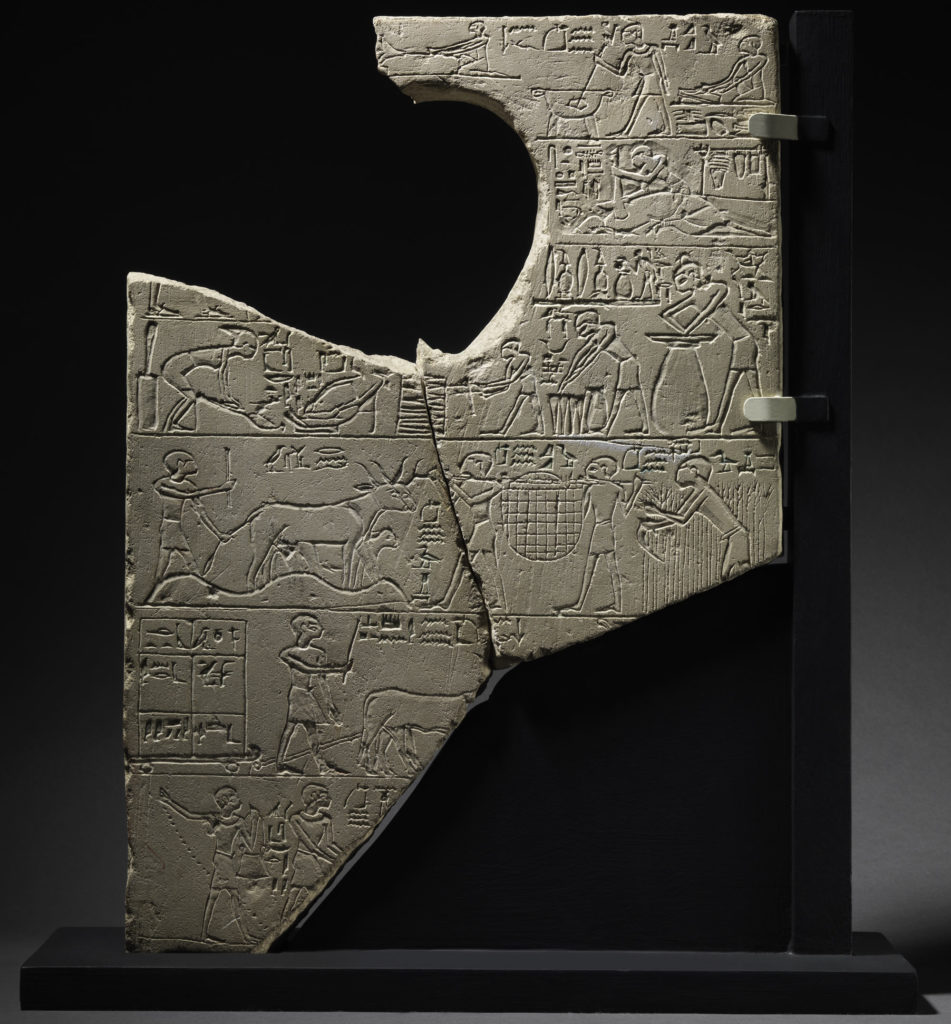 The owner of our stela, Amenysoneb (which means ‘The God Amun is healthy’) worked at Abydos, where he was in charge of a small rotation of priests, called a phyle. He lived during the reign of a little known pharaoh of the 13th Dynasty, Userkare Khendjer, who ruled towards the end of the Middle Kingdom. That detail alone makes this stela very interesting.

Currently in two pieces, two of its corners are also missing, which is not too surprising as this limestone object is not very thick – and of course there is the wonderful cut-out feature in the middle that would have made it more vulnerable.

The cut out is in the shape of the ankh hieroglyph, meaning ‘life’. It is the most immediately striking thing about this stela and creates a kind of window to see through it. That’s really unusual – there are only a few other examples like this that have ever been found.

People sometimes think of the ancient Egyptians as being obsessed with death but I think that’s incorrect; they’re actually really obsessed with life. They wanted life to last forever, which is why they created highly decorated tombs and mummified bodies; all this effort was actually about making sure death is only temporary and that life continues on forever.

The theme of life turns up everywhere but for the average Egyptian, life would have been quite short. Some high ranking people, like Pharaoh Rameses II, lived into their 90s (and there’s an earlier king, Pepy II who was recorded by Manetho as having reigned for 94 years, although this is disputed), but this was truly exceptional. Amenysoneb was not quite at this level of society however – you’d probably call him middle-class today. 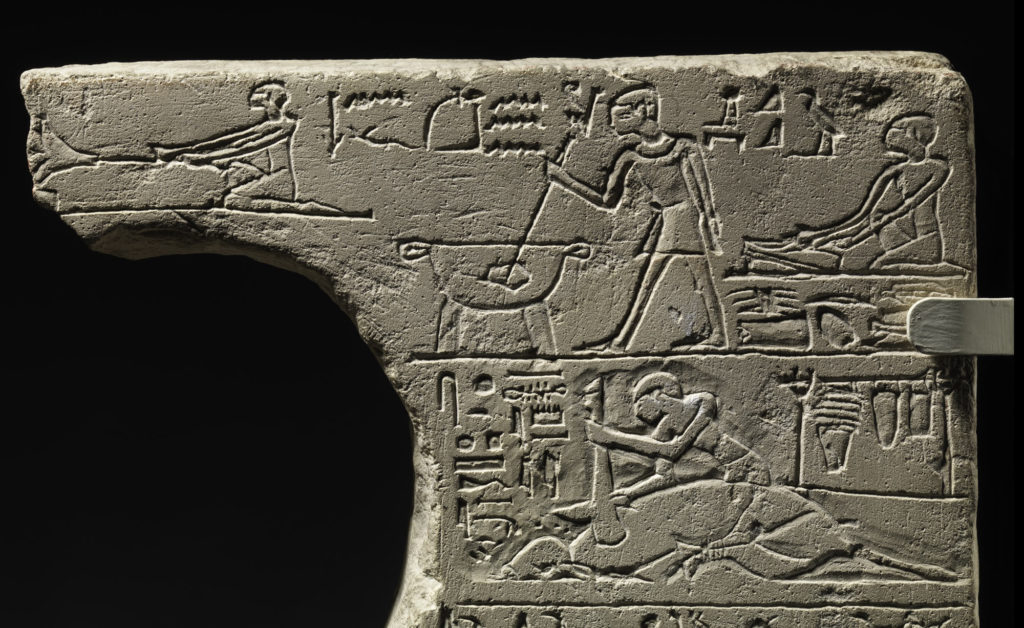 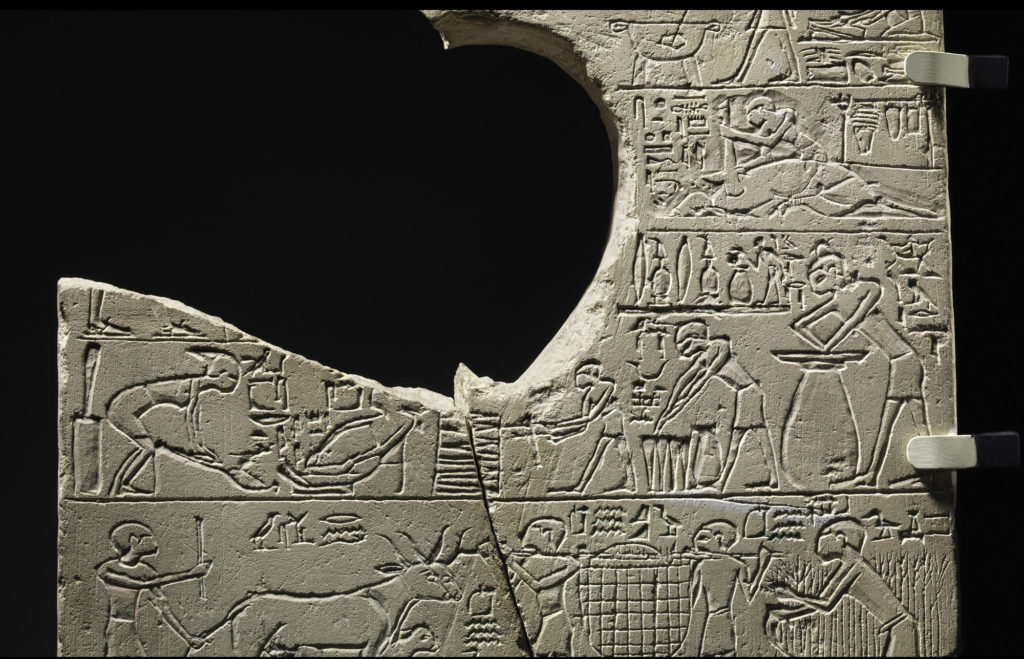 He was important enough to be in charge of other priests, but whether he himself could read or write is debatable. Individuals like Amenysoneb left written records as part of their jobs within the priesthood, but often these types of record are merely copies of the same formula repeated without variation. So it is not entirely clear whether their authors were really fully literate, or simply able to copy out a small selection of set texts.

The decoration on what we would consider the front of the stela is really typical. The largest figures are Amenysoneb and his father, worshipping Wepwawet, a jackal god connected to Abydos. The rest of the stela names other family members, and indicates their relationship to Amenysoneb.

“Bread, meat and beer – considered by the Egyptians as the most important things you need for an eternal life”

Happily, some of the colour remains on the front of Amenysoneb’s stela, which sits in the centre of one of our rooms so you can walk all around it and see it from both sides.

In fact it is the decoration on the other side, on the back, that I find really interesting. The images are arranged in a series of rows, a bit like a comic strip. They show food production and agricultural activities, which is a theme of decoration very common in ancient Egyptian tombs.

A key purpose of this decorative theme when inscribed on a tomb wall was to magically provide the tomb owner and his family with the provisions that are depicted, in a manner similar to the offering formula text. But as far as I’m aware there is not a single other ancient Egyptian stela known which contains this kind of scene. 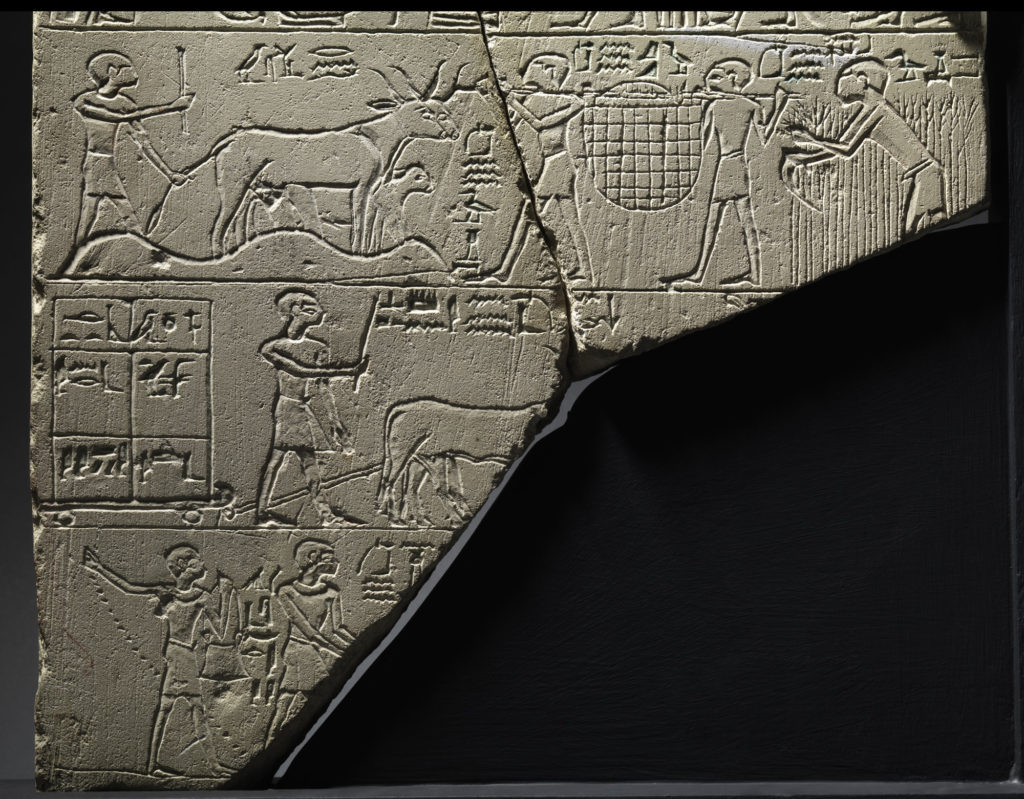 It is likely that the activities shown reflect to a certain extent the everyday life and interests of Amenysoneb and his family. If you were a middle-ranking priest in ancient Egypt, as well as working at the temple you would also be likely to be working on the family land. In these scenes you can see cattle being slaughtered and then butchered, there is grain production and transportation, and even a depiction of beer brewing. So Amenysoneb is presumably ensuring that he and his family have bread, meat and beer in the afterlife – considered by the Egyptians as the most important things you need for an eternal life.

The scenes in question could very well have been copied from a tomb wall, although there are some personal details which appear specific to Amenysoneb – his servants and the people working in the fields are named individuals. Including these people would have provided for them in the afterlife as well – Amenysoneb is responsible for all of his dependants and through his stela he is making sure they also are very well provided for.

But why is this is the only known example with this kind of scene? Why did Amenysoneb break with hundreds of years of tradition, and why did no-one else ever adopt this theme on stelae in the millennia since? Although one can posit a few theories (did Amenysoneb and his family have no decorated tomb, so used the stela as a substitute?) these questions don’t really have fully satisfactory answers (why did others without decorated tombs not do the same?), making this stela quite an enigma.

The Garstang Museum of Archaeology

The Garstang Museum of Archaeology, in the School of Archaeology, Classics and Egyptology is named in honour of Professor John Garstang, whose excavations in Egypt, Sudan and the Levant produced the majority of our archaeological collections. Between 1904-1914 Garstang's work at the cemetaries of Beni Hassan, Esna and Abydos in…