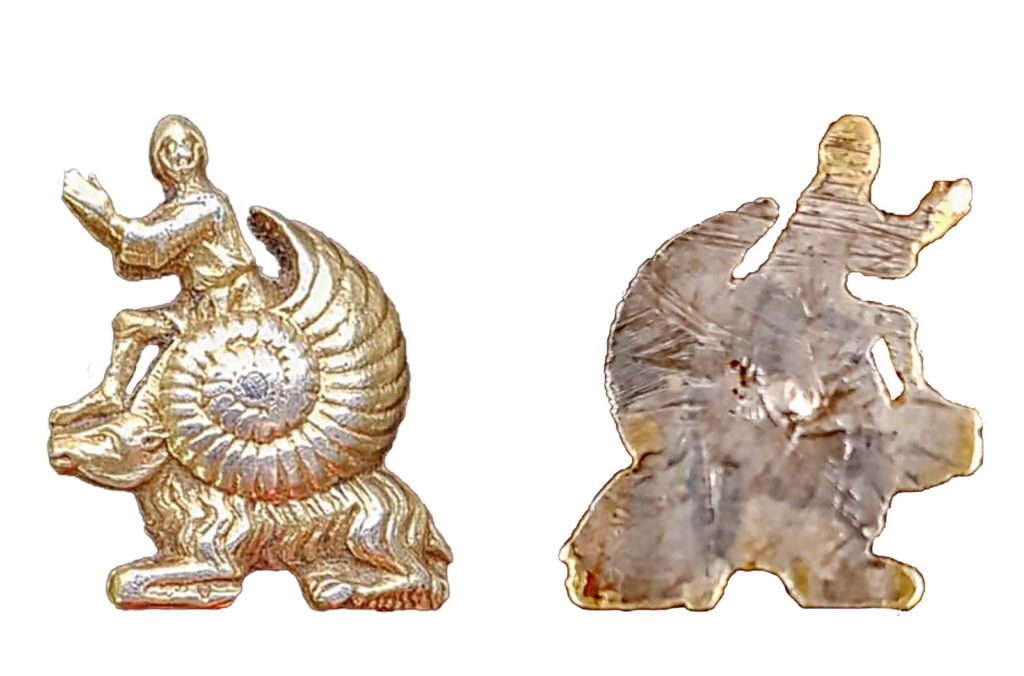 A knight on a snail shell on a goat. This small medieval mount pendant was found in Pontefract, West Yorkshire in 2020. West Yorkshire Archaeology Advisory Service

The archaeological stuff that lies beneath our feet never fails to amaze and every year it is the Portable Antiquities Scheme that helps to track and record this vast haul and help the more valuable and interesting objects come to reside in our local museums for the benefit of everyone.

This year, the British Museum-run national scheme helping the public identify, log and report their archaeological treasures has revealed its annual Treasure Report of the wondrous finds made by members of the public and metal detectorists.

Rare recent finds include a peculiar medieval ‘snail man’ mount which archaeologists cannot but resist comparing to a meme and Iron Age grave goods, including an uncommonly decorated mirror and tweezers. Other Treasure finds range from a medieval seal matrix depicting an elephant to a Bronze Age hoard with an unusual rapier and bracelet.

The finds were announced as the Report reveals that 1,094 cases consisting of over 20,906 individual artefacts were reported Treasure in 2018 with a third of these acquired by 108 different museums. 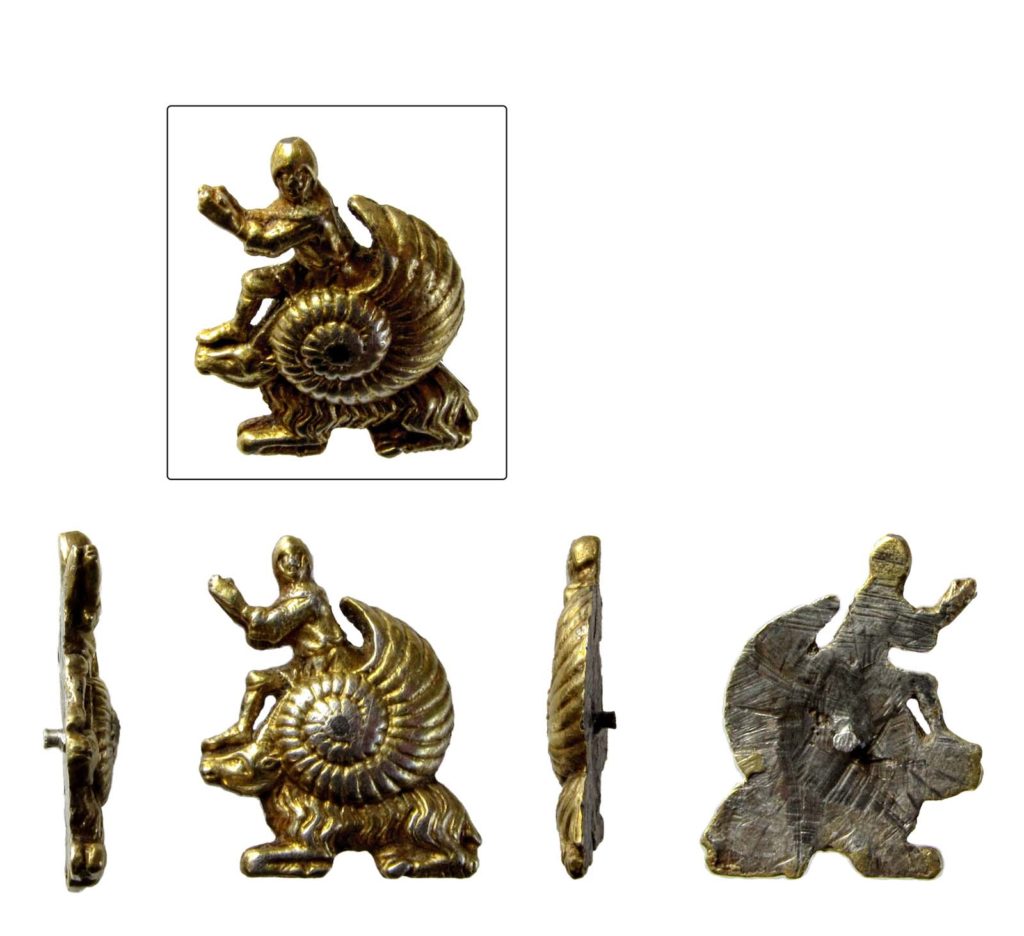 Of these over 93% were acquired by museums local to the findspot and, as ever, the vast majority (96%) were found by metal detectorists but with 22% of local museums benefiting from finders waiving their fee, for some it has been much easier to acquire these finds for public benefit without the need for fundraising.

The unusual and unique medieval ‘snail man’ mount from Pontefract, West Yorkshire, was found in 2020 and experts date it to AD 1200–1350.

The male knight wears a Norman style helmet with a long-sleeved tunic and one leg lunging forwards, suggesting he is stepping out from the shell. The figure’s hands are pressed together as if in prayer, implying it has religious connotations.

Anyone who has studied the symbolism of medieval imagery will know that representations of fantastic beasts are common in medieval art. But depictions of snail combat are apparently something of a phenomenon – with knights engaged in mortal combat with the otherwise benign gastropods often popping up in manuscripts from the period.

“This unusual silver-gilt mount may once have been attached to a leather belt or strap, or perhaps worn as a badge,” says Beverley Nenk, Curator: Later Medieval Collections at the British Museum.

“The image of the praying knight emerging from a snail shell atop a goat implies an element of parody or satire. Snails are often depicted in the margins of medieval illuminated decorated manuscripts and are thought to symbolise cowardice, and this may be the intended meaning.

“The mount may be a satirical reference to cowardly or non-chivalric behaviour of opponents in battle, or as a parody of the upper or knightly classes. As such, it demonstrates the humour often found in medieval material culture.” 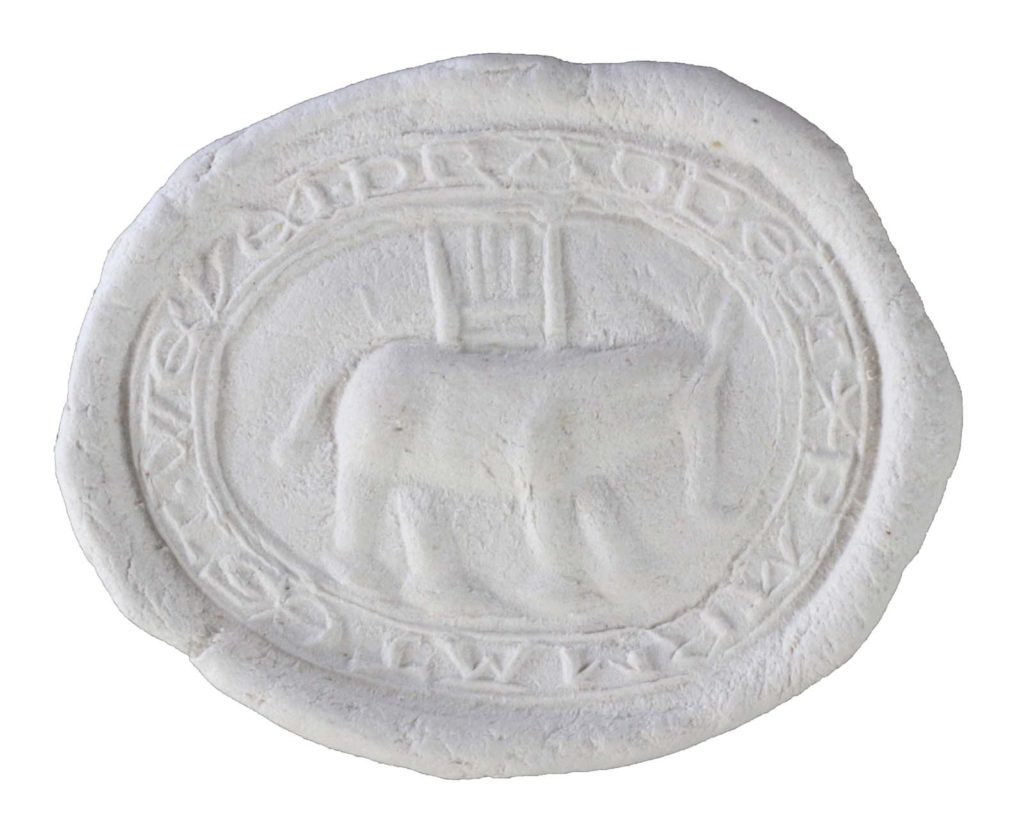 Another creature can be found on a medieval seal matrix found in East Walton, Norfolk. Engraved with an elephant carrying a castle or howdah on its back, it was discovered in 2020 and is the third such gold seal matrix to be recorded through the British Museum’s Portable Antiquities Scheme (PAS), showing how rare they are.

Dating between AD 1250 and 1350, elephants appear in examples of early medieval art as a symbol of fidelity, gentleness, great strength and longevity, including Romanesque sculpture and Byzantine silks. The castle reflects the animal’s close association with the east, where Indians and Persians were said to use such structures to fight from in battle.

A live elephant was present in the royal menagerie of Henry III at the Tower of London between 1255–1257 as a gift from Louis IX of France.

“This gold counter-seal, or private seal, would have been used to seal letters or documents, and demonstrated the wealth, status and education of its owner,” says Beverley Nenk, Curator: Later Medieval Collections.

“The motif engraved on the gemstone is a rare portrayal of an elephant from the medieval period, which is found mainly on objects signifying wealth and status, such as carved ivory gaming pieces and heraldic badges. It is represented with a war-tower, or howdah, on its back, which subsequently became known as the ‘elephant and castle’ of heraldic iconography.

“Few people in medieval England would have seen a live elephant. The image may have been based on reports of these fabulous and exotic creatures from travellers or pilgrims returning from the East or from the Crusades, or from descriptions and images in bestiaries and other manuscripts.”

The anonymous inscription reads x PARMAT EST ‧ WEVEI ‧ DRA OBEST, likely meaning ‘armed with a shield, the outlaw dragon is harmful’, which suggests a mythic link between elephants and dragons – it was said that a dragon is an elephant’s only foe. Norwich Castle Museum hopes to acquire the find. 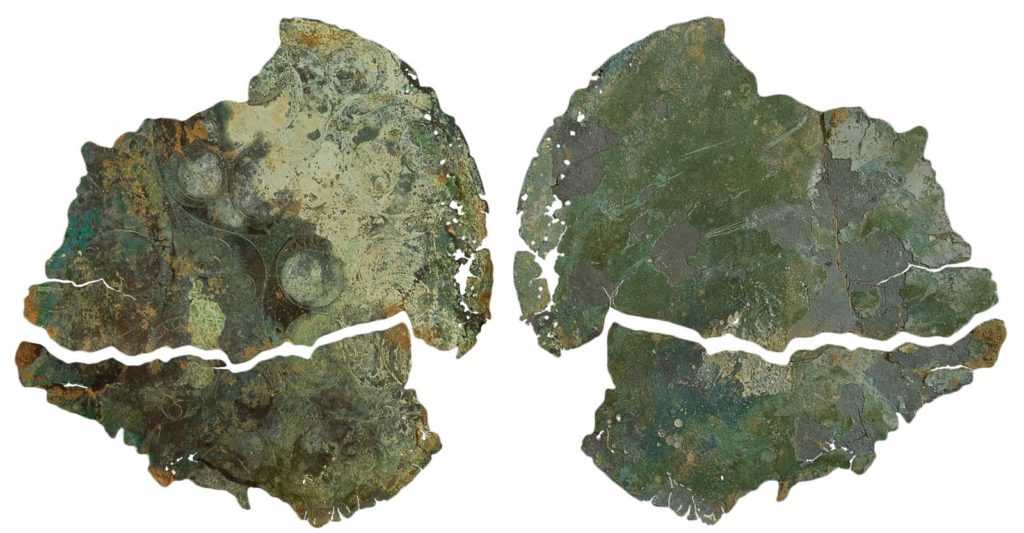 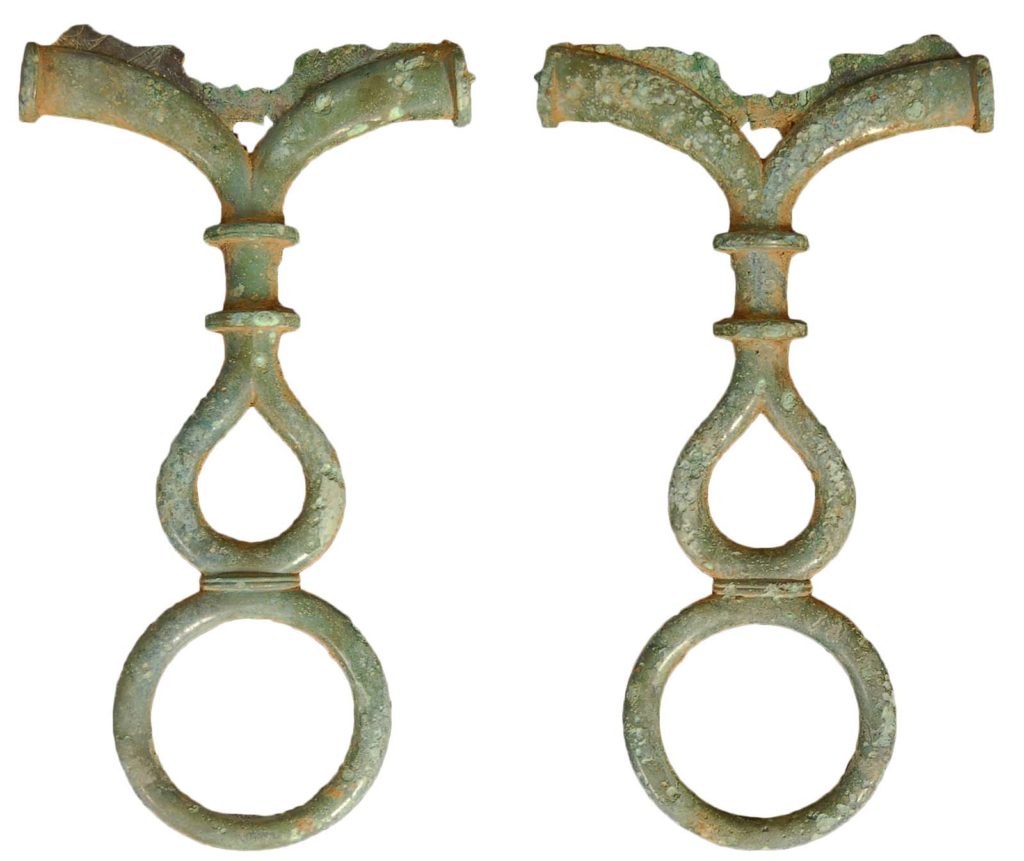 From Kensworth, Bedfordshire, came various Iron Age objects dating between 80 BC–AD 100. Among them a decorated bronze mirror, a pair of tweezers, a pin and numerous fragments from bronze vessels thought to be goods from a cremation burial.

The polished bronze mirror is characteristic of the Iron Age in southern Britain, with only around 30 decorated examples currently known. The mirror is in several parts, comprising a handle and two substantial pieces of bronze sheet, which would have formed a kidney-shaped mirror plate. On the back, the plate is decorated in the European Iron Age La Tène style, comprising tear, fin, circular and trumpet-shaped motifs.

The tweezers are quite a rare find too; it is uncommon for Iron Age tweezers to be decorated, but the example from this find is engraved with three circles, each containing a basket-weave tricorn element dividing the circle into three. The circles are separated by basket-weave fin motifs, all within a plain border.

“The finds tell us about the care and attention to personal appearance in Late Iron Age Britain; the polished bronze mirror is a rare and exciting find, and the decorated tweezers are unique. The vessels may have been used for serving up part of a funeral feast, or perhaps they were to equip the deceased with food and drink for the afterlife.” 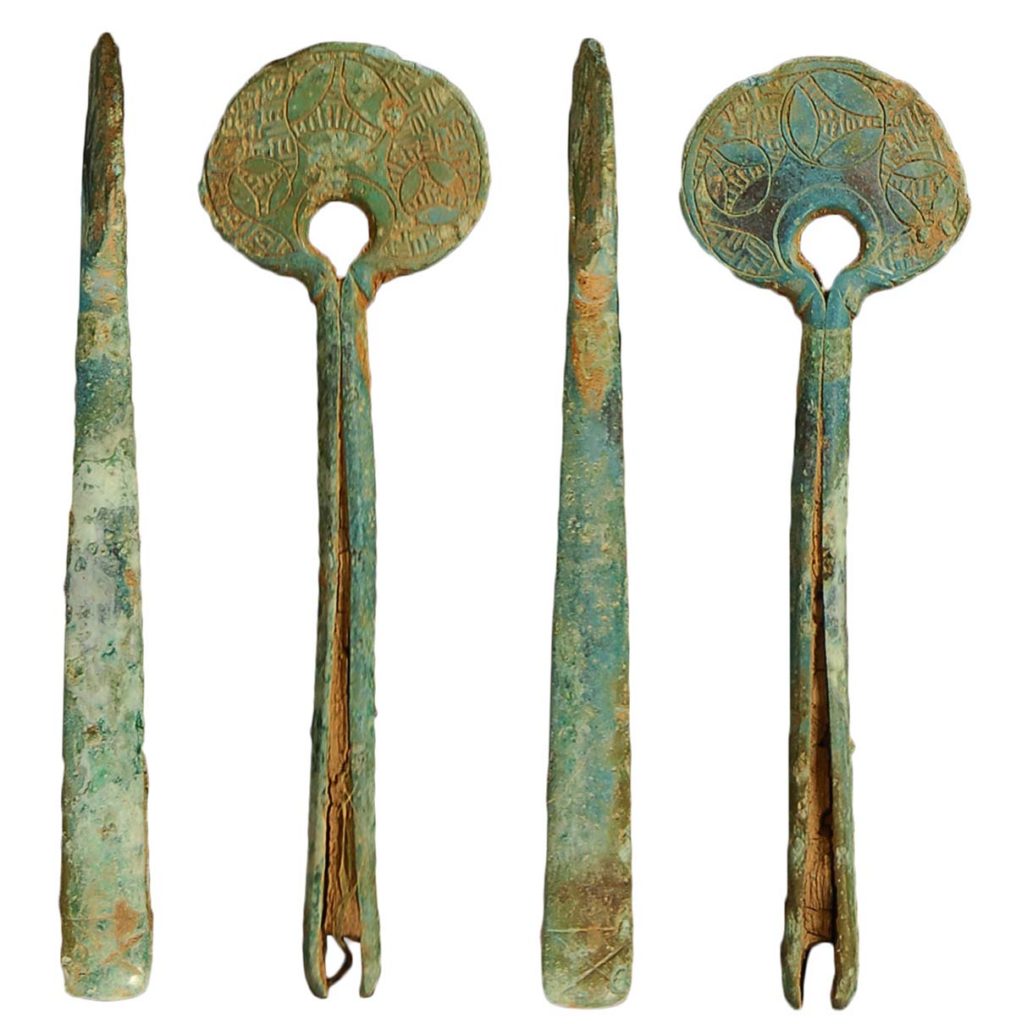 Another spectacular object among the thousands of reported finds is a bronze rapier blade, measuring over half a metre long and broken into three pieces, which was found as part of a Bronze Age hoard in Stalbridge, Dorset.

The bronze hilt has been modelled in imitation of a wooden one, and is highly unusual for a find from Britain, with only two other examples known, while other, similar, examples are from Ireland. The metal hilt allows us to appreciate how other, more common, rapier blades – a type of sword – would have looked when new. 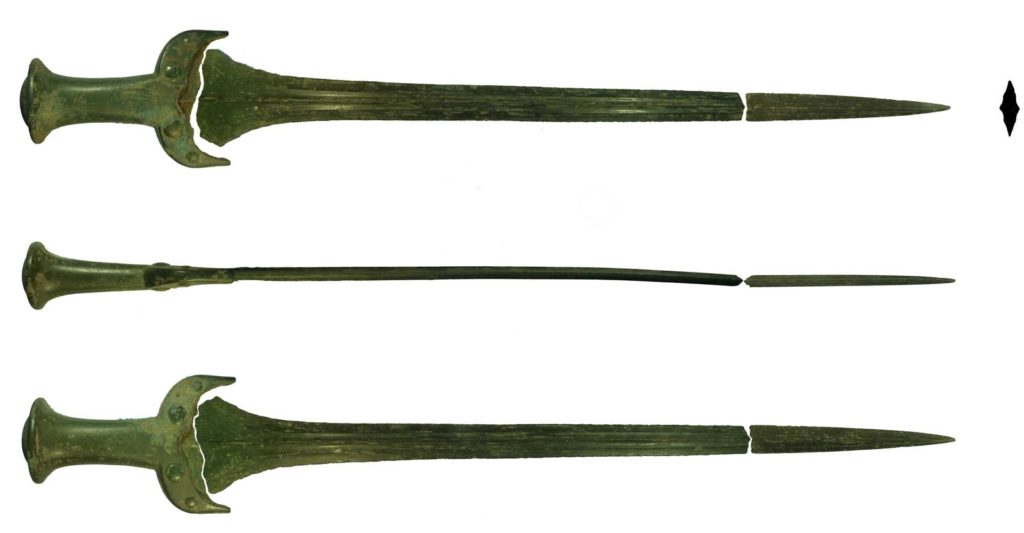 A fully intact copper-alloy bracelet, also rare, was found in the same hoard, decorated with engraved panels of complex geometric decoration. It is a type found in both southern England and the near Continent. The third object was a type of axe known as a palstave used in everyday tasks of woodworking and house building. The hoard dates to 1300–1100 BC, a period when the deposition of metal hoards increases in the south of the England.

“Hoards of this type characterise a period of intensifying connections and contacts across Britain, Ireland and the near Continent associated with the trade and exchange of copper and tin,” says Neil Wilkin, Curator: Early Europe collections.

“The rapier blade made of bronze rather than wood is a fantastic insight into the rich organic world that is so often missing from our appreciation of the deep past. It is not clear why the bronze smith chose to undertake the difficult and skilful task of casting the handle in metal, but it suggests that this blade had a particular symbolic importance and may have been designed to endure.”

These finds are recorded on the British Museum’s Portable Antiquities Scheme (PAS) database (finds.org.uk/database), which holds information on over 1,521,000 objects, all freely accessible to the public.

The PAS is a partnership project, managed by the British Museum (in England) and hosted by the Amgueddfa Cymru – National Museum Wales (in Wales). It consists of 42 locally based Finds Liaison Officers (FLOs) with the Welsh Archaeological Trusts, whose job it is to record archaeological finds made by the public.