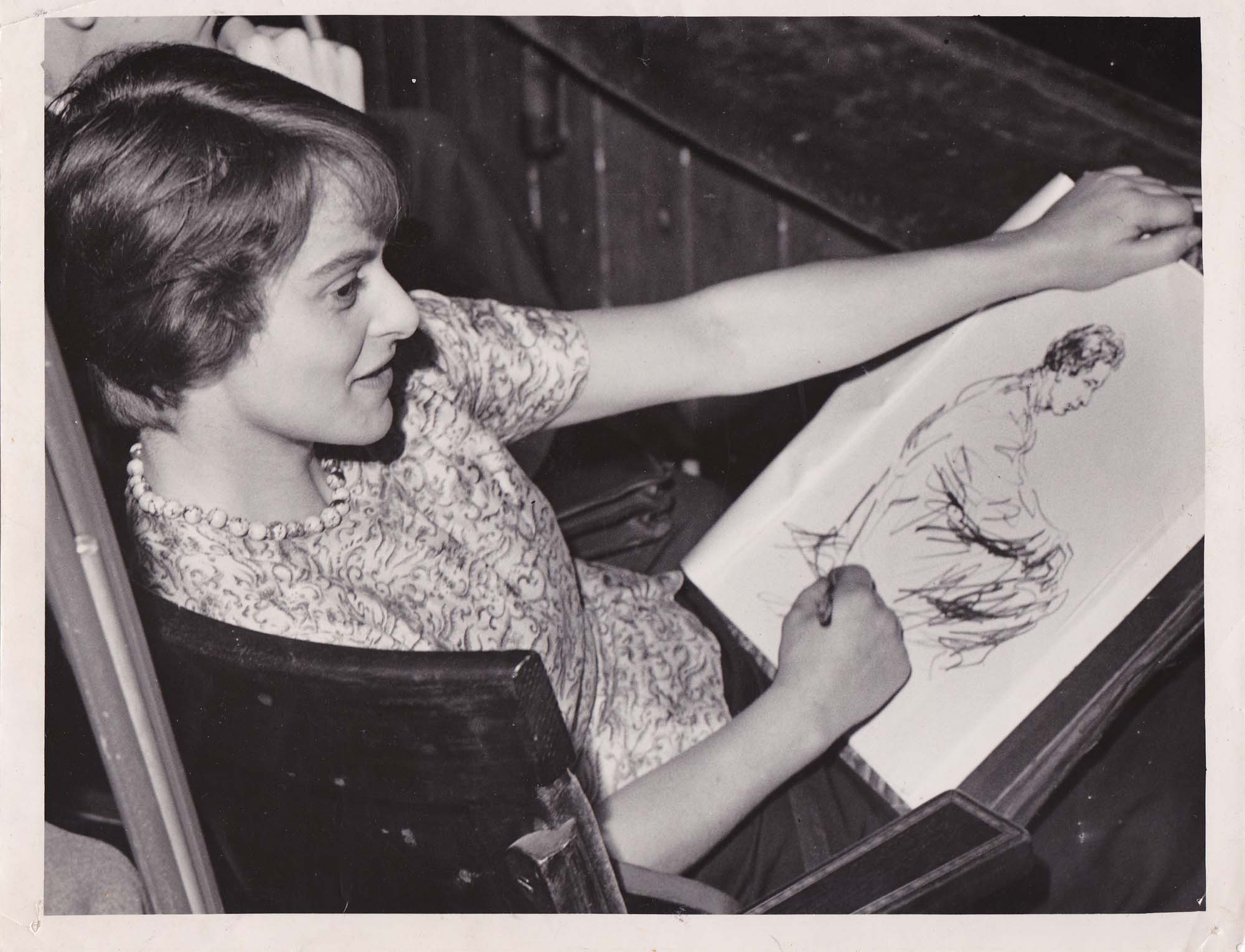 Milein Cosman (1921 – 2017) was a prolific artist who specialised in musical portraiture. Before she died, she donated over 1,300 of her drawings to the Royal College of Music Museum. This collection provides a vivid record of musical life in Britain during and after the Second World War.

Thanks to generous support from The Pilgrim Trust, the entire Cosman collection has now been digitised. You can explore it through the Royal College of Music Catalogue, or view a digital exhibition of highlights.

Cosman’s life story was rich and eventful. As a child she was forced to leave her native Germany when life under the National Socialists became dangerous for Jewish families. She eventually made her way to England, where she remained for the rest of her life. After studying at the Slade School of Art, she established herself as a successful commercial artist who specialised in musical portraiture. She famously provided illustrations for the Musical Times, as well as collaborating with her husband Hans Keller on a range of celebrated books about music.

Cosman worked quickly, usually from life, and often without even looking at the page. Her dynamic sketches are full of movement, capturing perfectly the poses and postures of musicians and conductors. She sometimes produced dozens of sketches in one sitting and liked to catch her subjects unaware, often drawing them from the back or the side so that they wouldn’t notice her.

Although Cosman was best known for her portraits of male composers and musicians such as Igor Stravinsky and Benjamin Britten, she also drew many musical women – from internationally celebrated opera stars to musicians whose names have been forgotten. Here are some striking examples: 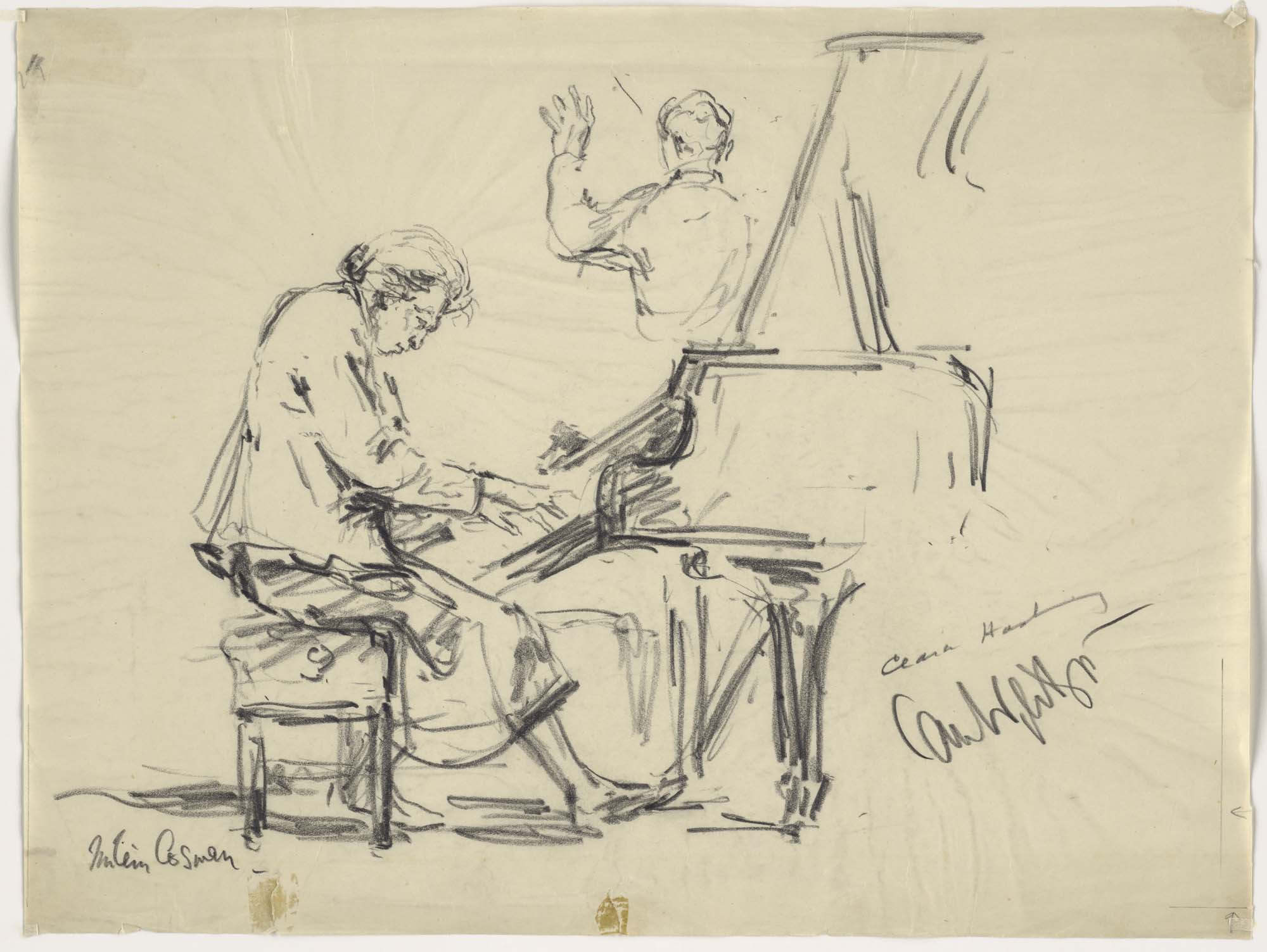 This drawing of Romanian pianist Clara Haskil (1895 – 1960) featured in a book that Cosman produced with her husband in 1957. The drawing was reproduced next to a text by Keller that described Haskil’s ‘knowledge of Mozart’s secret – that the rest is not silence, but music’. Haskil was a noted interpreter of the works of Beethoven. Her friend Charlie Chaplin once said: ‘In my lifetime I have met three geniuses: Professor Einstein, Winston Churchill and Clara Haskil’. 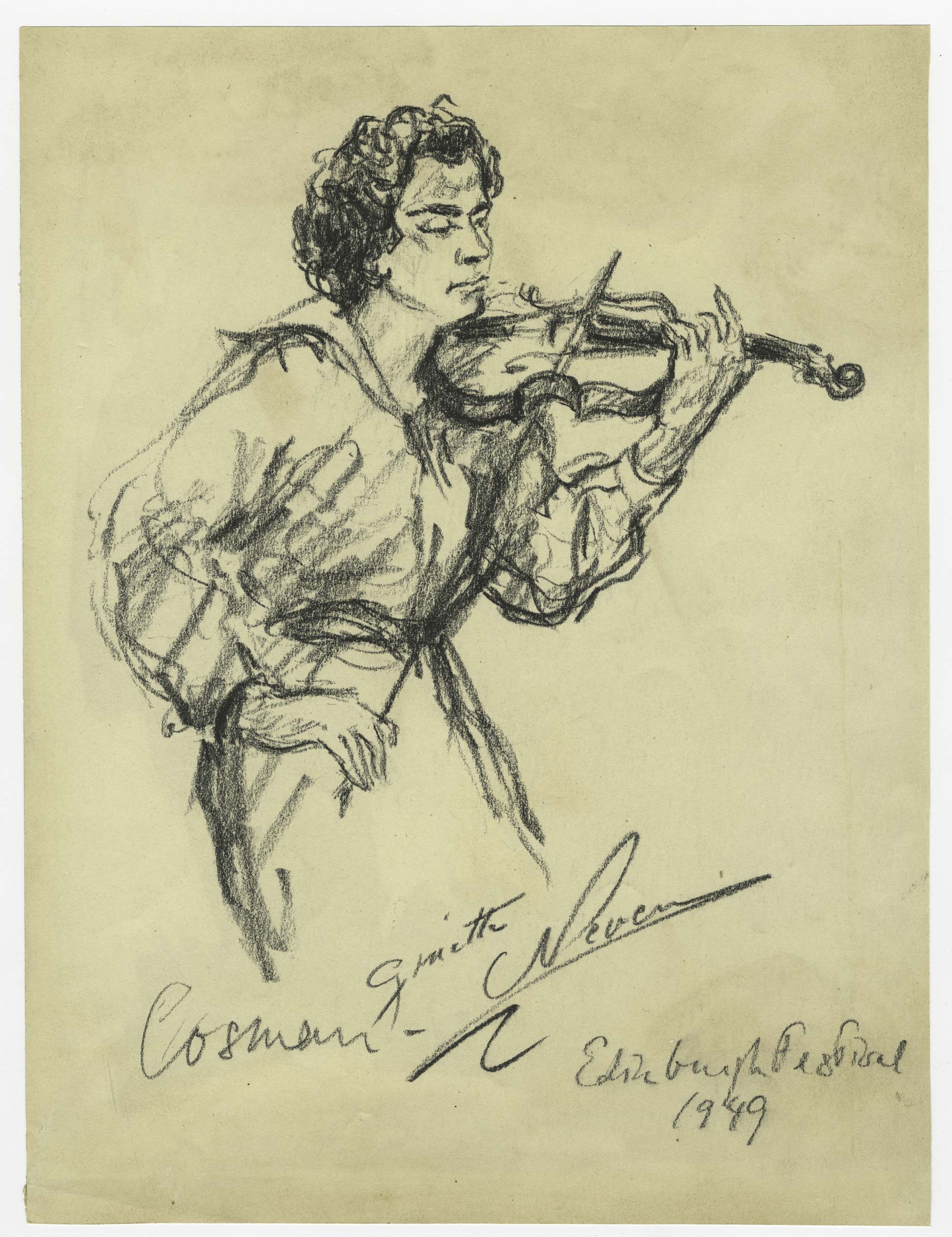 Over the years, several of Cosman’s sitters signed their portraits by her in approval. This portrait of French violinist Ginette Neveu is just one example. Neveu was an internationally acclaimed virtuoso. Less than two months after this portrait was made, she tragically died in a plane crash. Neveu was just 30 years old. Critic Martin Cooper said of her: ‘It seems as though the gods ordain for such precious talents a short span of life, allowing them to crowd into a few years of intense living the vitality of a lifetime’. 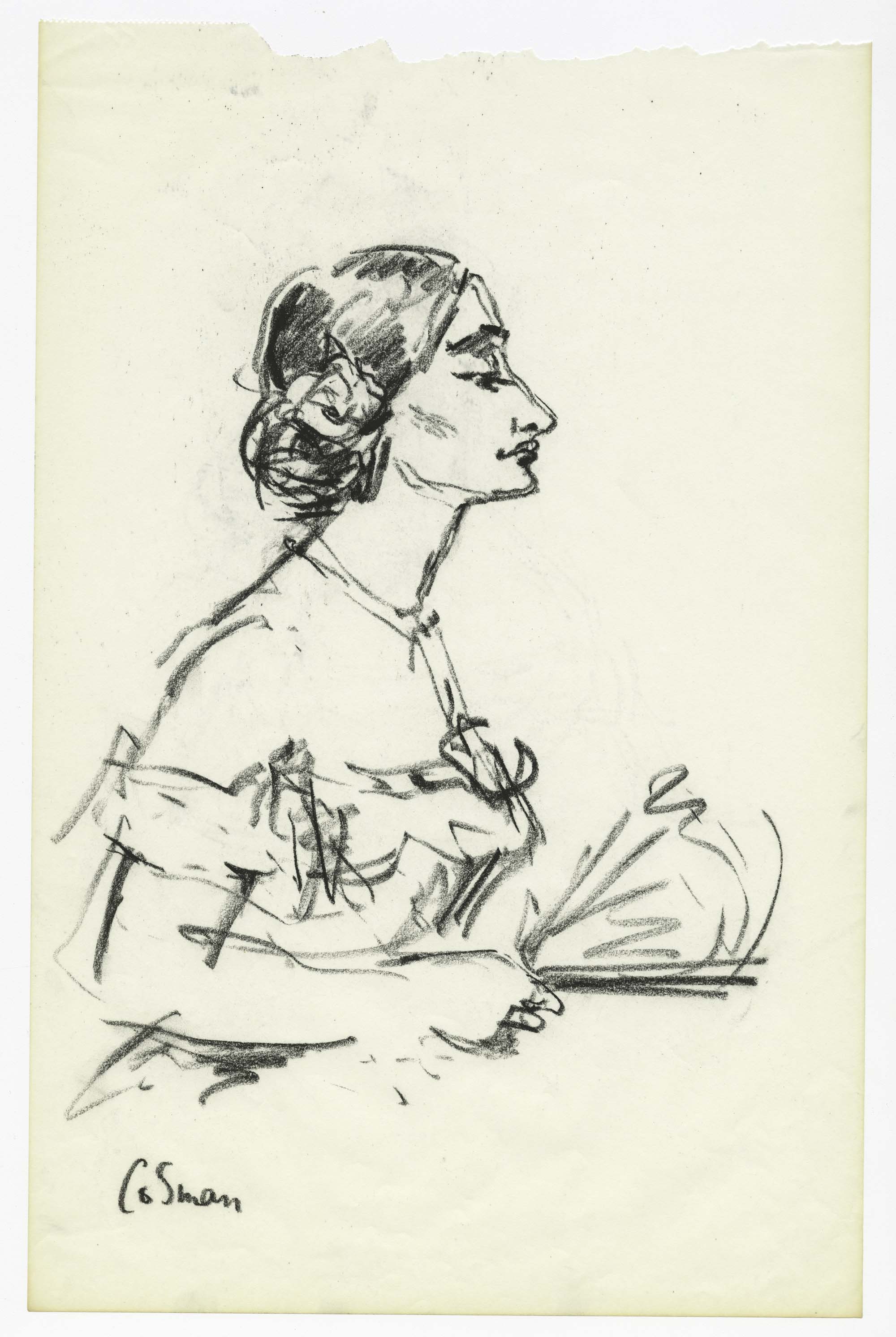 One of the most well-known women in the Cosman collection is Maria Callas. A true superstar, she was an icon of twentieth-century opera. Although the press were obsessed with her personal life, Callas trained exceptionally hard to perfect her famous voice and remains one of the best-selling classical vocalists to this day. Cosman’s drawings of Callas are particularly striking, offering a characteristically unique perspective on this singer’s well-known appearance. 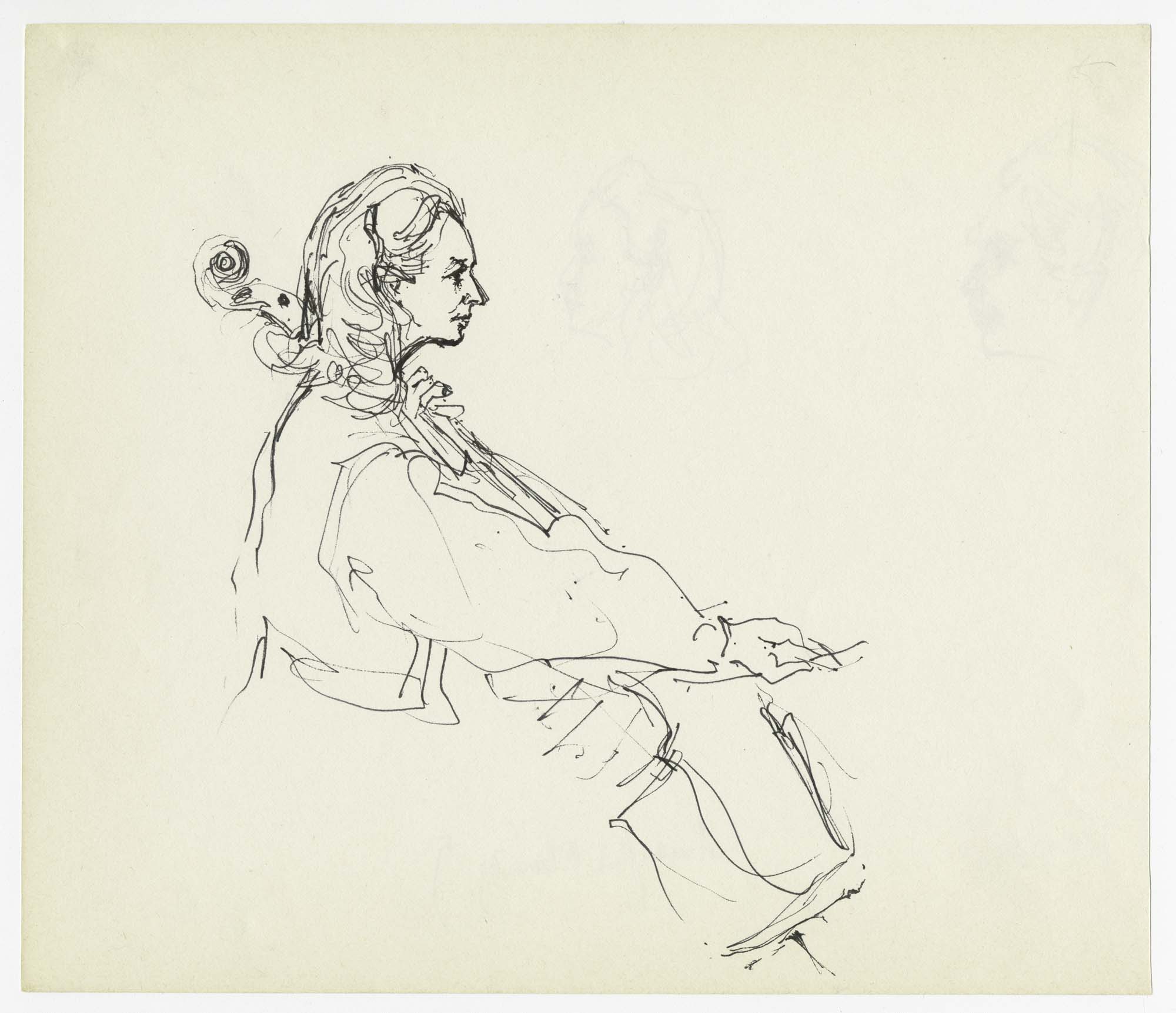 Amaryllis Fleming has been called ‘the leading cellist in post-war Europe’. She made her first broadcast on the BBC at the age of just 15 years old, before winning a scholarship to study at the Royal College of Music. Later in her career she returned as a Professor, and the College’s main concert hall is now named in her honour. Cellists were one of Cosman’s favourite subjects – she described them as ‘crawling all over their instruments like beetles’! 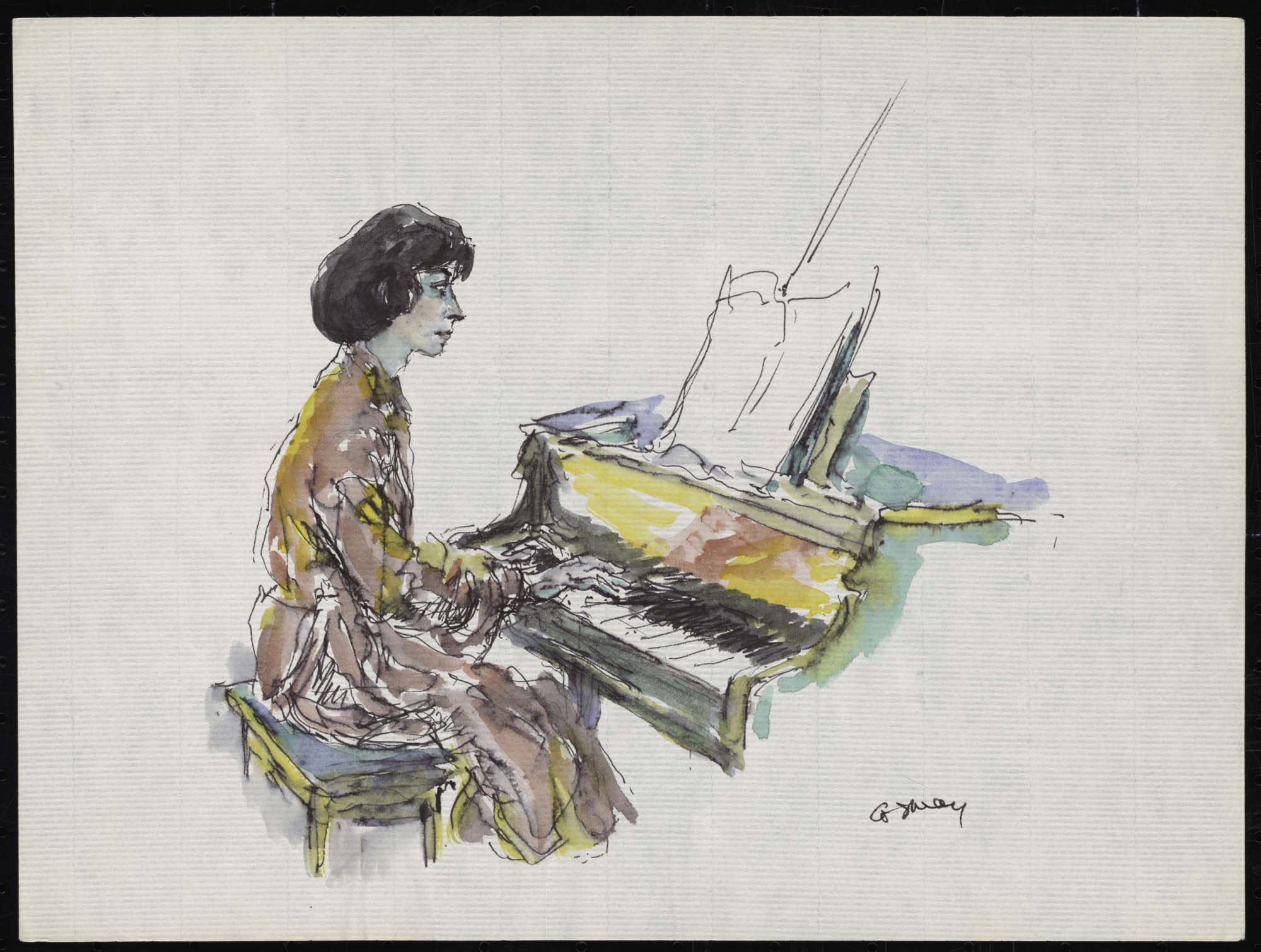 This portrait of British pianist Valerie Tryon demonstrates Cosman’s skill with watercolour. In 1950 Tryon became one of the youngest students to be admitted to the Royal Academy of Music. She has lived in Canada since the 1970s and still performs and records internationally. She is best known for her interpretations of Chopin, Liszt and Rachmaninoff.

Exciting developments! The Royal College of Music has exciting plans to redevelop its building in the heart of London's South Kensington! The More Music campaign includes new performance spaces, practice rooms, a café, and a brand new, fully accessible Museum at the heart of the RCM! In order for this…