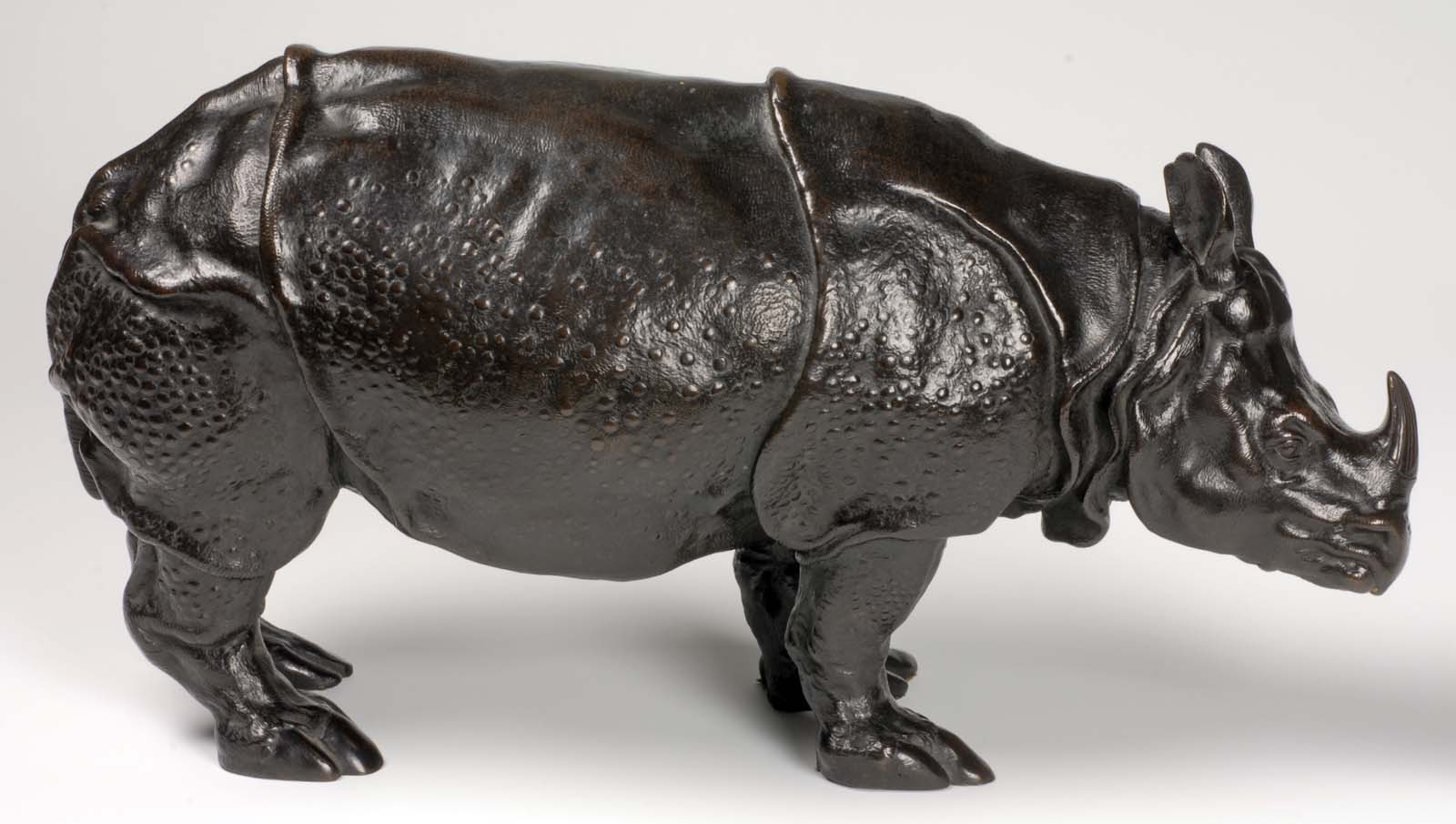 Humankind’s complex but often damaging relationship with the animal kingdom is a story so often told it seems like an everyday adjunct to modern life on earth, but the story stretches back across the centuries.

In Europe the royal practice of exchanging and keeping a menagerie of exotic animals stretches back into the medieval world, with the Tower of London Menagerie being in place from the 1200s to the 1830s.

But at the Barber Institute in Birmingham they are highlighting the story of Miss Clara, an unfortunate female Indian rhinoceros who achieved an unprecedented level of fame in the eighteenth century.

The starting point for the show is the eponymous bronze, A Rhinoceros, called Miss Clara, one of the most-loved objects in the Barber’s collection.

The small sculpture (measuring just 46.5cm long by 24cm high) is believed to be a ‘portrait’ of the real rhino – weighing in at around 5,000 lbs/2268 kgs when mature – which had been brought to Rotterdam in 1741 from Bengal by a retired Dutch East India Company Sea captain, Douwe Mout van der Meer. 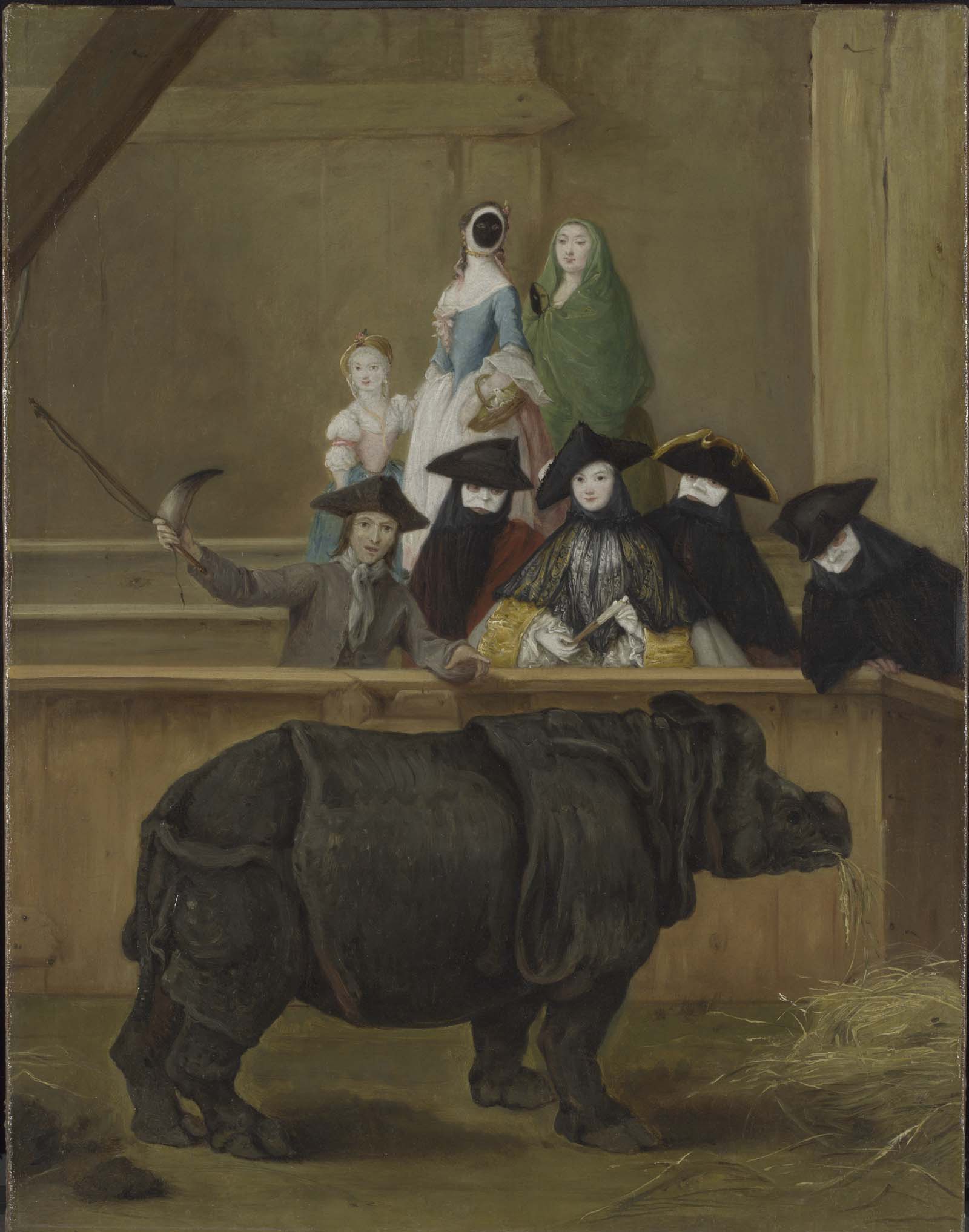 Upon disembarking from van der Meer’s ship, the Knappenhof, Clara was immediately exhibited to fascinated bystanders and soon commenced an extensive tour of Europe, travelling in a special wooden carriage drawn by eight horses, while her skin was kept moist with fish oil.

The huge public interest in ‘Miss Clara’ was greatly inspired by the fact that she was the first rhinoceros to be seen on mainland Europe since 1579.

‘Tame as a lamb’, she was feted in many of the continent’s major cities, Brussels and Berlin, Vienna and Venice, Paris and Rome. Subsequent lucrative (for her keeper) travels took her to Prague, Warsaw and Copenhagen before a visit to London, where she died in 1758.

At each destination, Clara was viewed by kings, queens, courtiers and commoners. In fact, anyone who could afford to gladly paid a fee to see her. She even spent time in Louis XV’s royal menagerie and had a vessel in the French Royal Navy named after her.

Clara was simultaneously exploited and adored as a celebrity; a contradictory phenomenon we tend to think of as contemporary. Clara’s fame generated an entire industry of memorabilia, from luxury souvenirs such as clocks and paintings to medals, cheap popular posters and prints and even hairstyles.

The Barber Institute takes an in-depth look at these themes, seeking to assess and place Clara in the wider context of animal celebrity. 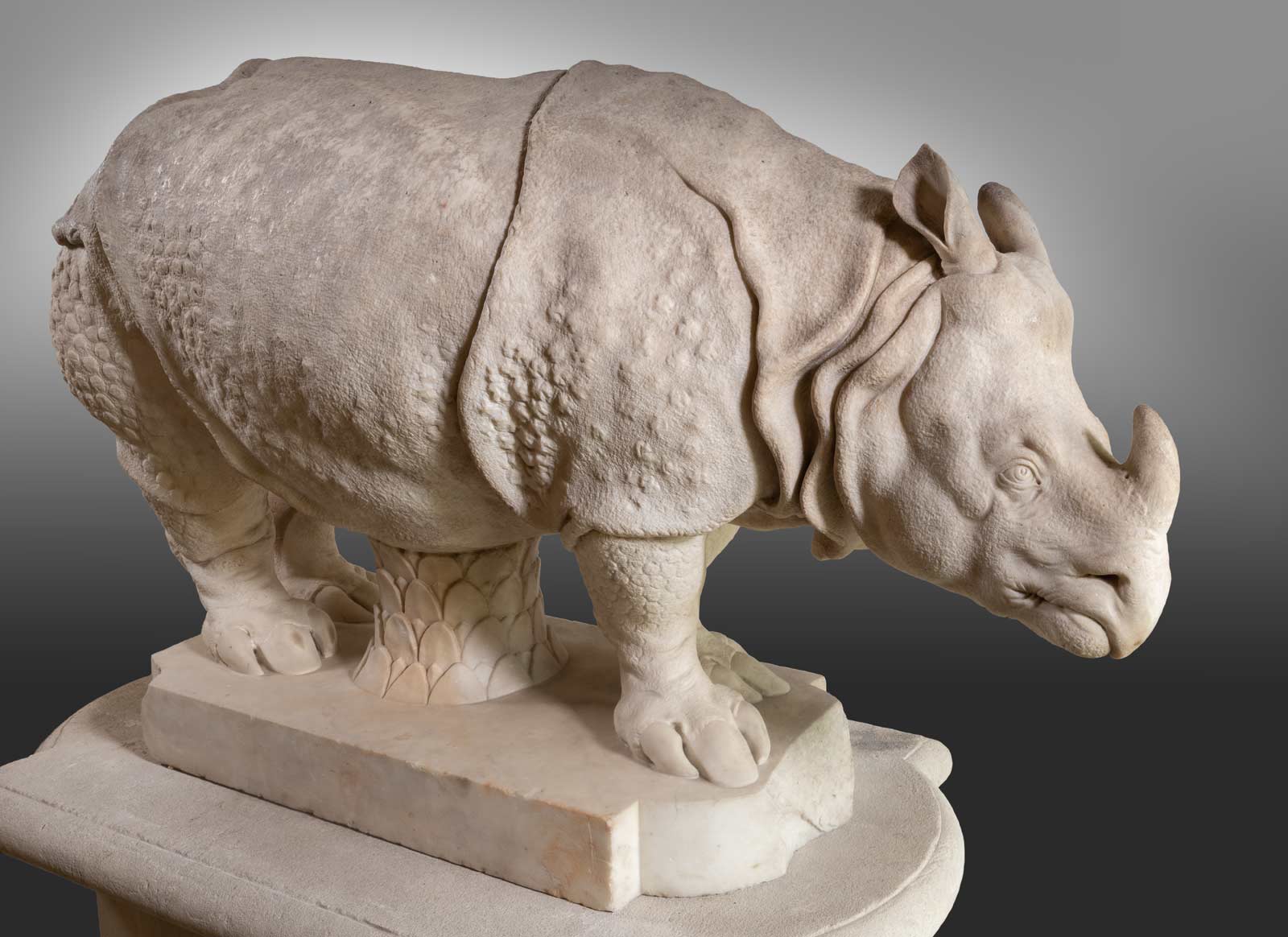 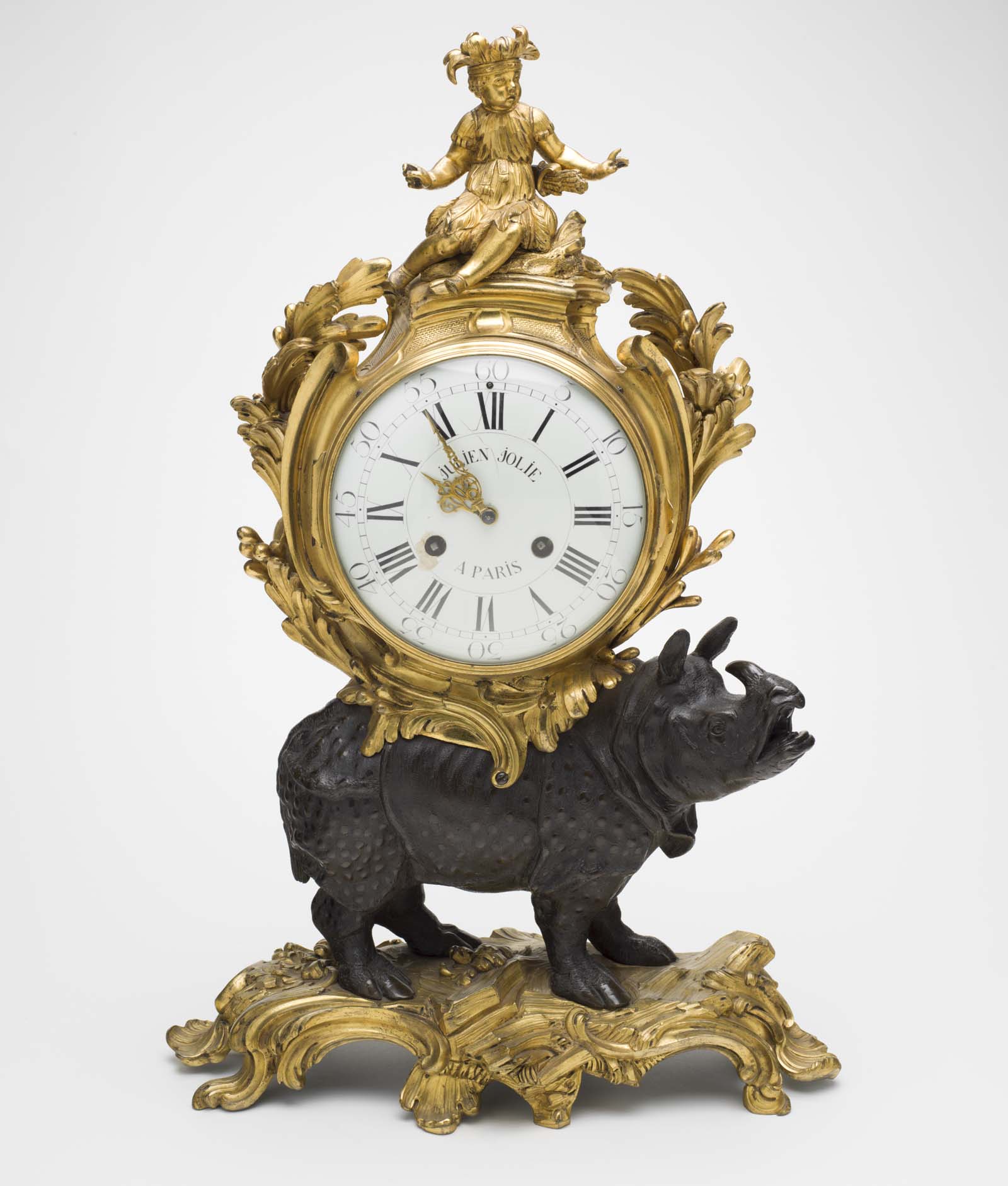 “Acclaimed as one of the finest of all European ‘old master’ animal bronzes, the Barber’s sculpture of Miss Clara will be seen for the first time in the ideal context of its most closely related other versions,” says exhibition curator Robert Wenley, “together with a wonderful range of paintings, drawings, prints and works of art featuring this much-loved rhinoceros, and similarly celebrated historical pachyderms.

“New attributions will be tested and affirmed, and Miss Clara’s celebrity revisited and reassessed.”

Ceramics, coins, paintings, prints and drawings by major artists such as Dürer, Rembrandt, Hollar, Longhi and Oudry, recording the large exotic pachyderms that so enthralled European audiences also feature in the exhibition.

The individual rhinoceroses, elephants, and hippopotamuses that inspired these artworks usually shared Clara’s fate of being separated from their fellow beasts, taken from their original habitat, and displayed as exotic wonders until their deaths.

The artworks they left in their wake provide an unusual and fascinating lens through which to consider how human attitudes to animals reveal societal assumptions in an age of European exploration, colonisation and commercialisation.

“While we are now rightly concerned about the plight of these magnificent beasts in their depleted native habitats,” adds Wenley, “we are better placed than ever to appreciate the huge impact of Miss Clara and other behemoths on their rare appearances in early modern Europe.” 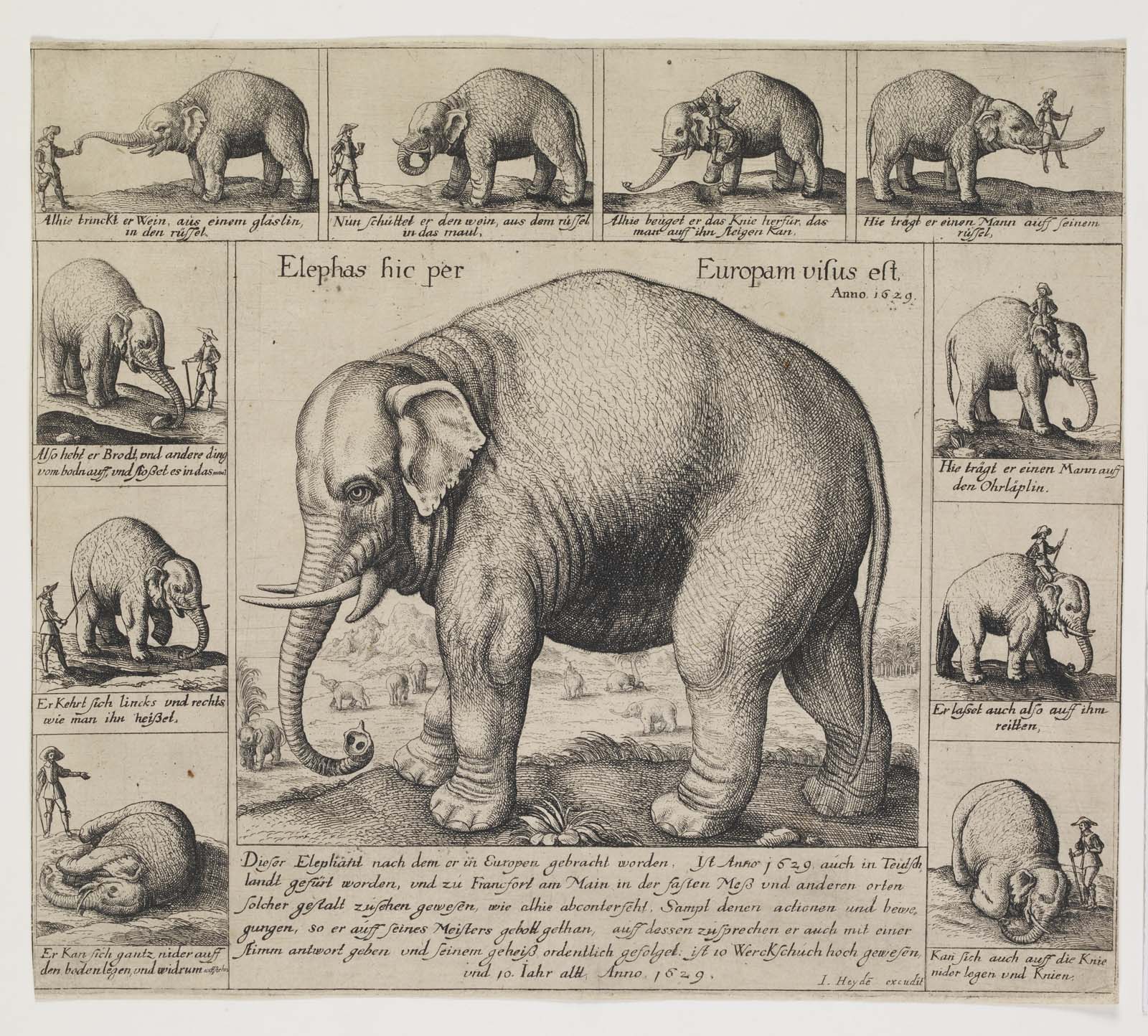 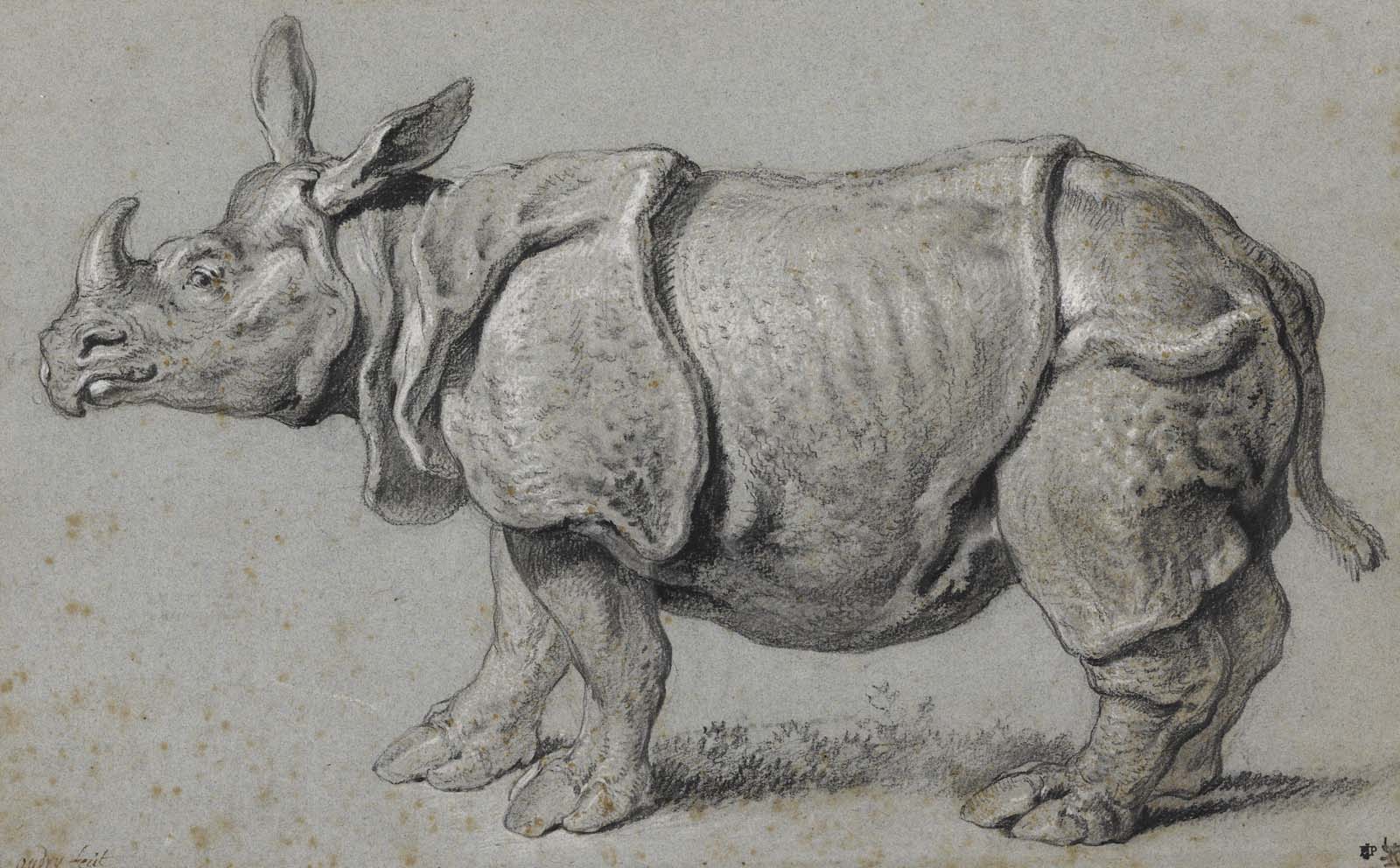 Other celebrity beasts sharing the spotlight with Clara include the elephants Hanno, Hansken, Jumbo and tragic Chunee, an India elephant brought to Regency London in 1811. He was trained to take a coin and then return it, using his trunk.

Lord Byron saw Chunee perform in Exeter and wrote: “The elephant took and gave me my money again — took off my hat — opened a door — trunked a whip — and behaved so well, that I wish he was my butler.”

Unfortunately, Chunee’s life came to a gruesome end in a hail of bullets in 1826, after running amok whilst being exercised along The Strand and accidentally killing one of his keepers.

Renowned depictions of rhinos were also made by such famous artists as Dürer and Stubbs, while in the 1850s, Obaysch, the first hippopotamus (Hippopotamus amphibius) to be seen in Europe since Roman times became a star at ZSL London Zoo.

Like Chi-Chi, the giant panda and Guy the Gorilla – both later residents at London Zoo in the second half of the 20th-century – Obaysch was a sensation, attracting huge numbers of visitors to the Zoo and in turn generating the Victorian craze for hippomania.

In the Barber exhibition, visitors will see him represented in a watercolour by Joseph Wolf and a small sculpture made by Joseph Gawen, traditionally said to have been made from Nile mud.

The Barber Institute of Fine Arts

Monet, Manet, and Magritte; Renoir, Rubens, Rossetti and Rodin; Degas, Delacroix and Van Dyck — not to mention Turner, Gainsborough, Gauguin, Van Gogh and Picasso… You can see major works by all these great artists in the Barber Institute of Fine Arts, at the University of Birmingham. There’s also a…