With a new exhibition exploring Southend’s subcultures about to open at the Beecroft Art Gallery on December 15, Assistant Curator of Social History Iona Farrell picks some snapshots of the seaside town’s subcultural history

This seaside town on Essex’s south coast has always attracted an alternative crowd and over the years it has witnessed waves of subcultures, supported by a thriving music scene and local art colleges that have harnessed the inherent creativity of subcultures.

Exploring their beliefs, fashion and music the exhibition has been made possible by local people loaning clothing, photographs and memorabilia that trace a 70-year history of subcultures in the town. 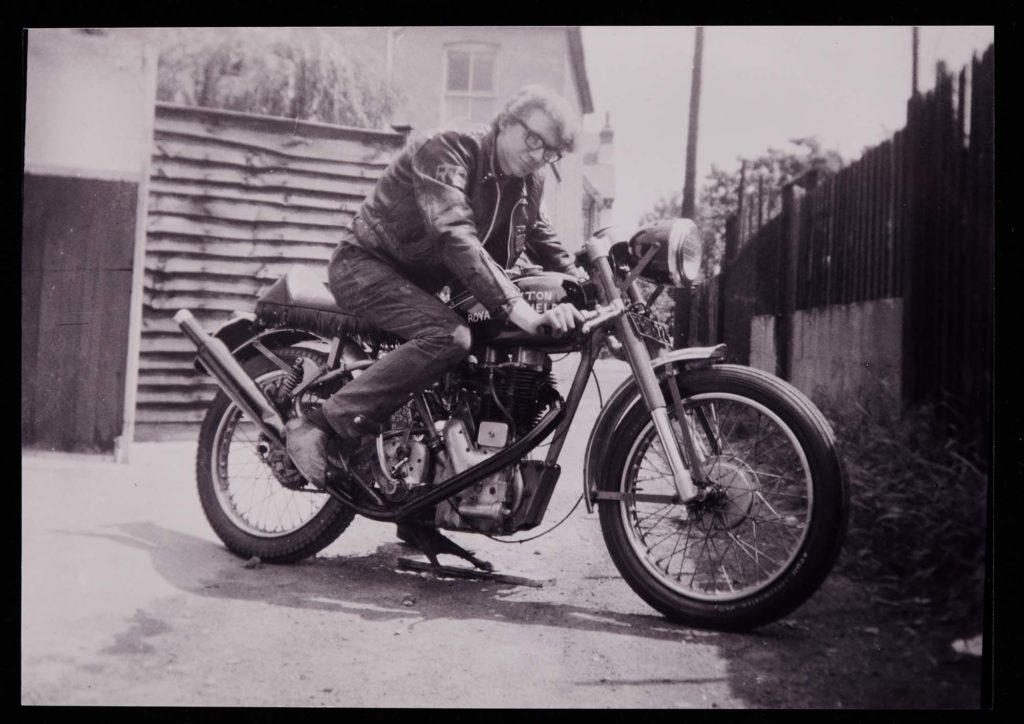 The speed-loving rockers can be traced to the late ‘50s and early ‘60s, when they adopted the hard-edged cool of rebel Marlon Brando in The Wild One by riding motorbikes and listening to rock ‘n’ roll. Initially they were known as ‘café racers’, as they would take pit-stops at roadside joints such as The Ace Café on London’s North Circular. Another name for them was ‘ton-up boys’ as ‘doing the ton’ meant racing at speeds over 100mph.

This photograph is of Geoff Horder on his Royal Enfield Bullet that he customised with a leather trim and racing handlebars. It was not unusual for rockers to customise their bikes and Geoff would often fix the motorbikes owned by his fellow rockers. The ultimate motorbike was the Triton, a hybrid machine which offered the road-handling of a Norton frame with the power of a Triumph engine. Like any rocker, Horder wore a leather jacket on his motorbike; these were hard-wearing and close-fitting so as not to slow you down when racing around corners. 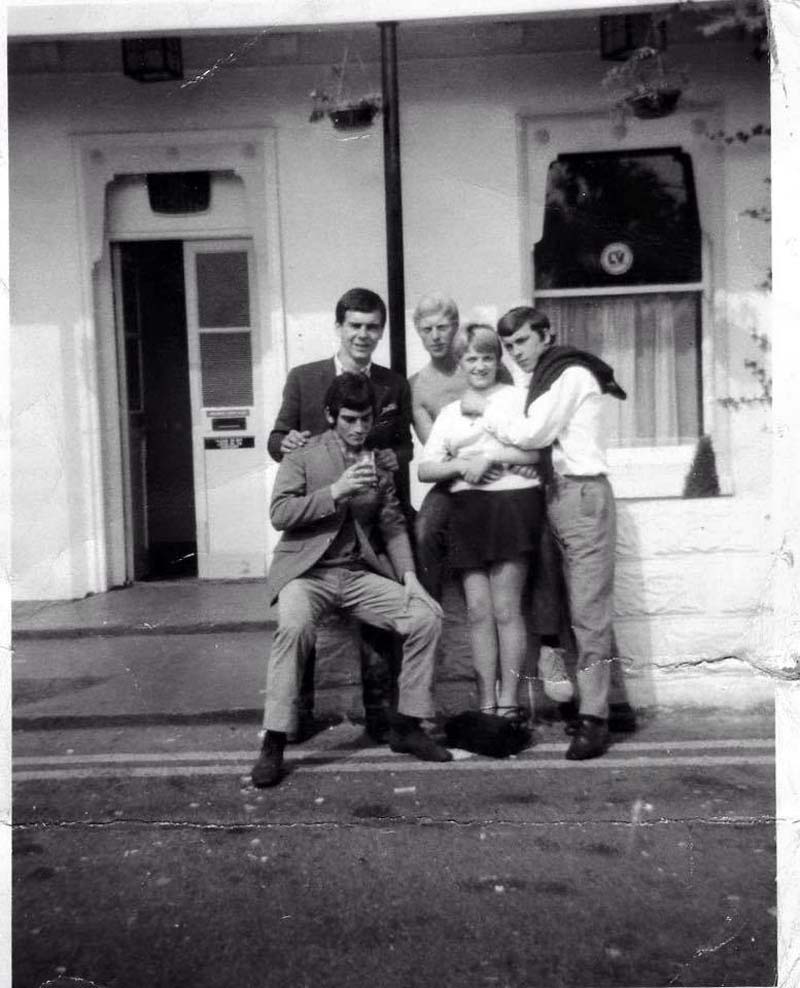 The supposed arch rivals of the rockers were the mods, who opted for continental fashions and Italian scooters. Mods in Southend would hang out in coffee bars such as The Shrubbery on the Royal Terrace at the bottom of the high street. Young mods from Southend Art College would bunk off lessons to listen to music from the coffee bar’s juke boxes and sip coffee from the Italian espresso machines. The College was a hotbed for creative talent and many bands were formed at the school. Art students would swap clothing with each other and head to the Army and Navy store along the London Road to get their mod gear, buying Levi jeans and moccasins.

For live music The Studio Club and The Shades were the places to go. The Studio Club had jazz and rhythm and blues nights and hosted big names including American R&B legend, John Lee Hooker. Local bands such as The Paramounts, who later became Procol Harem, known for their hit ‘Whiter Shade of Pale’, played at these venues and the Cops and Robbers, a rhythm and blues act, were regulars at The Studio and once supported The Who.

Teddy Boys heading towards Southend seafront on May Bank Holiday, 1977 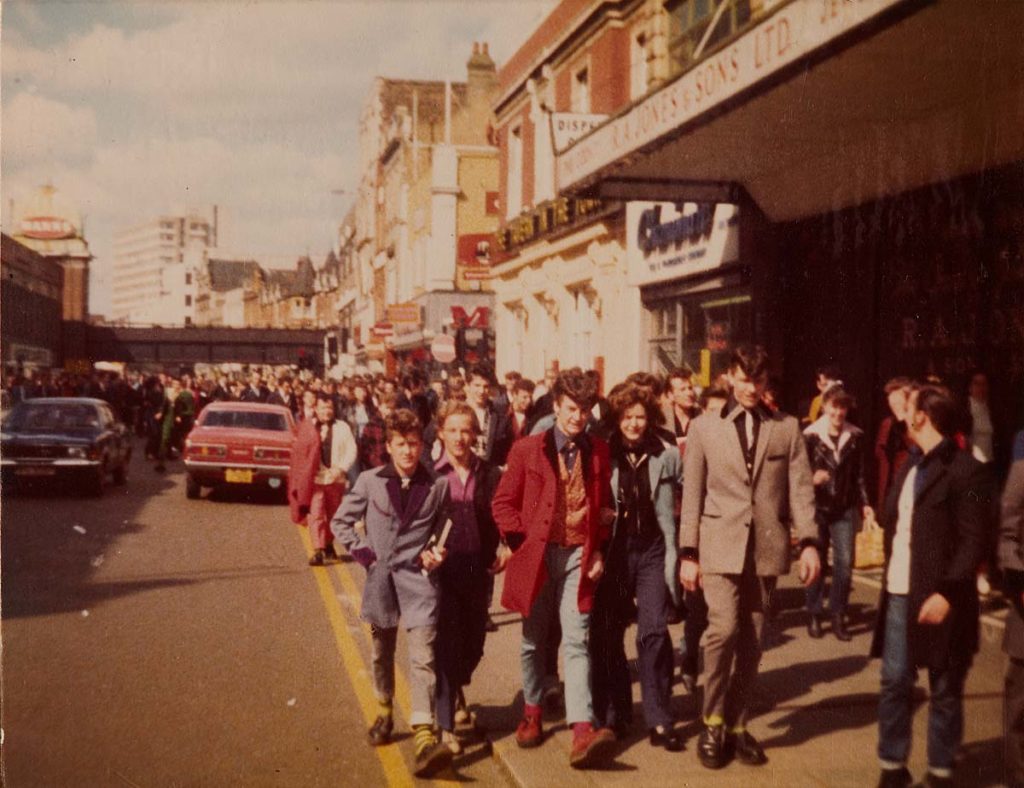 On bank holidays hundreds of Teddy Boys would descend on Southend, many taking the train down from London. This photo was taken by Paul, a local Teddy Boy who photographed his fellow Teds on the May Bank Holiday in 1977. Like many Teddy Boys in the town they would head to the Long Bar on Pier Hill to listen to rock ‘n’ roll and later the Queens Hotel in Westcliff for their popular rock ‘n’ roll nights.

The 1970s saw the revival of many subcultures, including Teddy Boys and, following on from their 1950s predecessors, the second-wave Teds listened to ‘50s rock and wore drape suits. The distinctive drape suit brought together the style of the Edwardian gentleman with a Wild West gambler. The tailored long jacket was paired with bootlace ties and slicked back hair. Teddy Boys continued to be inspired by the 1950s and Paul would take photos of Elvis Presley to his local tailors in order to recreate authentic ‘50s looks. Paul’s memories of being a Ted in Southend can be heard within the exhibition. 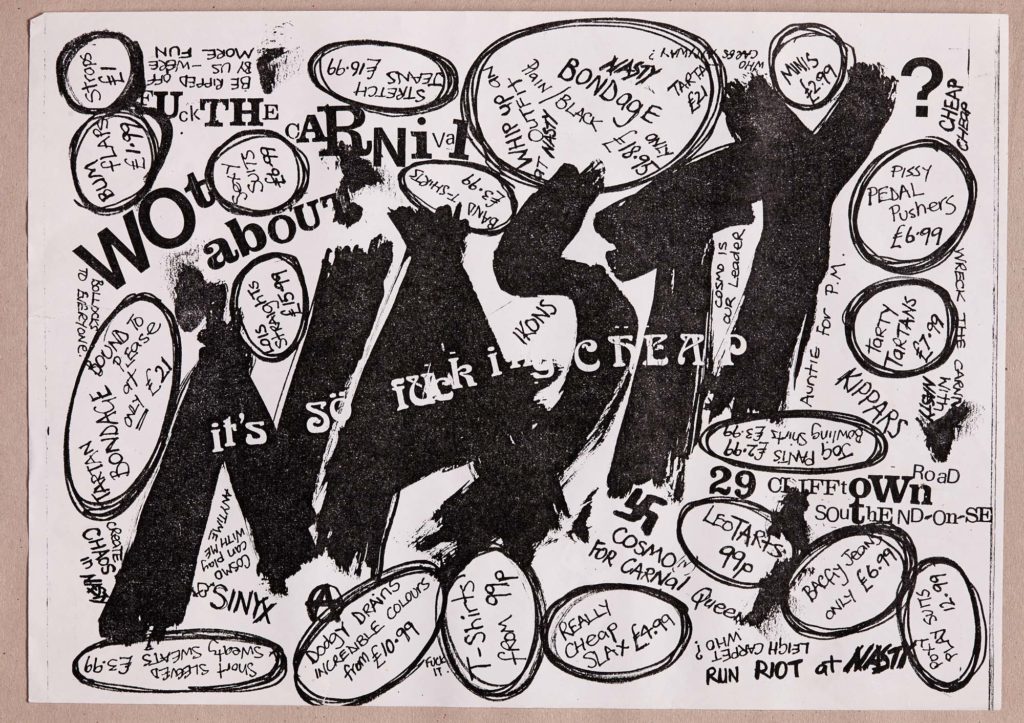 Nasty was a clothing boutique on Clifftown Road catering to the alternative crowd in Southend. This flyer was created following Nasty’s infamous appearance on a float at Southend Carnival with local punk band The Sinyx. After punks were caught handing out anarchic material to the crowd the shop was banned from subsequent carnivals.

Nasty sold punk clothing at a time when you couldn’t source it anywhere else in the town and they also catered for the mod-revival that was taking place in the late ‘70s and into the ‘80s. Punks could go to Nasty to purchase t-shirts emblazoned with slogans as well as mohair jumpers. These striped jumpers were knitted by local women in Thundersley in Essex who were probably unaware they would eventually grace the backs of nihilistic punks. 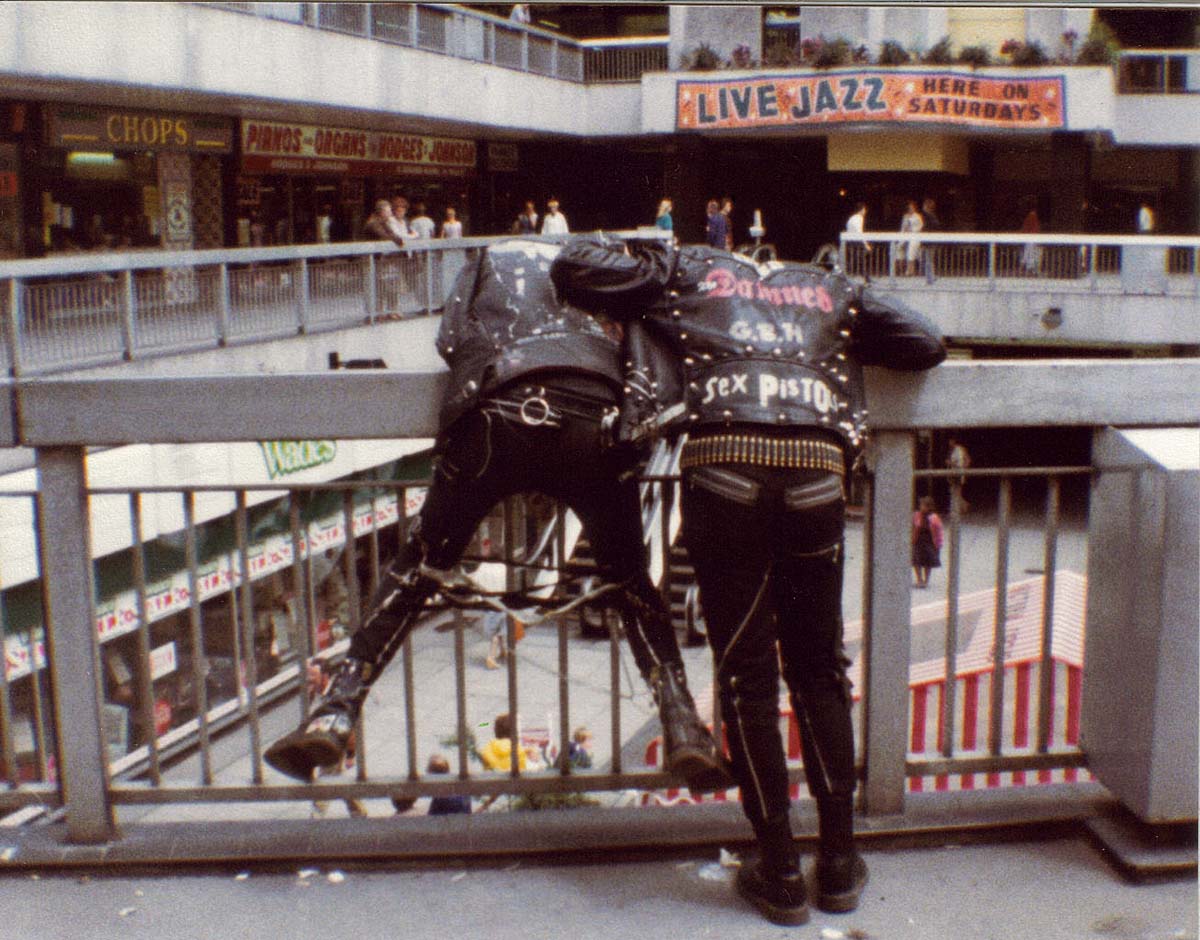 Punk burst onto the scene in the mid-1970s into a country on the brink of collapse, with rising unemployment, strikes and the three-day week. Punk was different to the youth cultures that had gone before – it was loud, brash and anti-establishment. Punks delighted in the visual violence of their clothing by wearing ripped shirts, confrontational slogan tees and bondage trousers.

These punks were photographed hanging over Southend precinct at the top of the high street, a popular hangout in the town. Their leather jackets are emblazoned with names of their favourite bands whilst tight bondage trousers encase their legs. For punks with money to spare they could take the train to Seditionaries on the King’s Road in London. Seditionaries was where Vivienne Westwood sold risqué bondage gear for the new punk crowd. Clothing from Seditionaires can be seen on show in the exhibition. 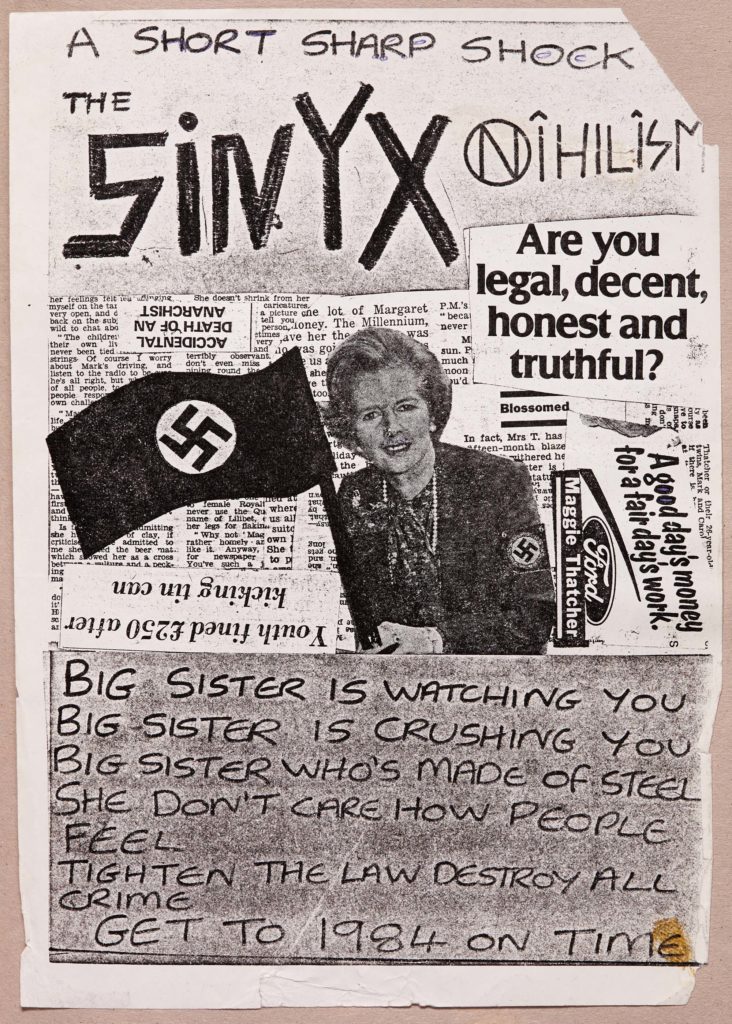 Southend has produced many notable punk bands including The Machines, The Sinyx and Kronstadt Uprising. These home-grown bands performed across the town, within local youth clubs such as Focus Youth Centre as well as Southend Technical College, where punks could pogo to the fast-paced music.

The DIY nature of punk meant many bands would design their own posters, including this poster by local band The Sinyx. With an unfavourable Conservative government in power, then Prime Minister Margaret Thatcher is depicted as a fascist dictator, inspired by George Orwell’s dystopian novel, 1984. Punk was a highly political subculture, worshipping outrage and rebellion and bands often made political statements like this through their music. 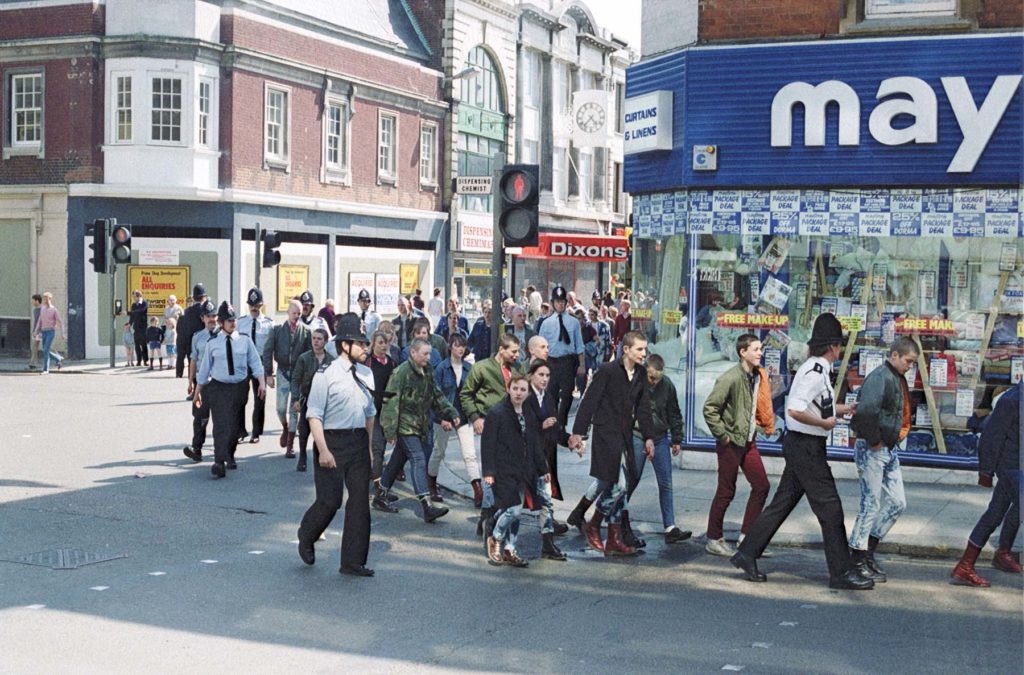 The high street and the seafront have always been the areas where subcultures have congregated in Southend. In the 1980s skinheads would arrive in hordes on the train, swarming onto the high street. The skinhead culture gained a bad reputation in the 1980s, with some following the political ideologies of the extreme right and rejecting the roots of the skinhead movement which celebrated Jamaican rude-boy culture and reggae music.

The moral panic this invoked led to Southend’s police force escorting skinheads arriving to Southend by train. The local press exaggerated the threat of this ‘gang warfare’ in the town, running stories of clashing gangs of skinheads, punks and Teddy Boys fighting on the seafront. Some skinheads remember having their braces and the laces from their Dr Martens boots confiscated to stop them running away from the police. 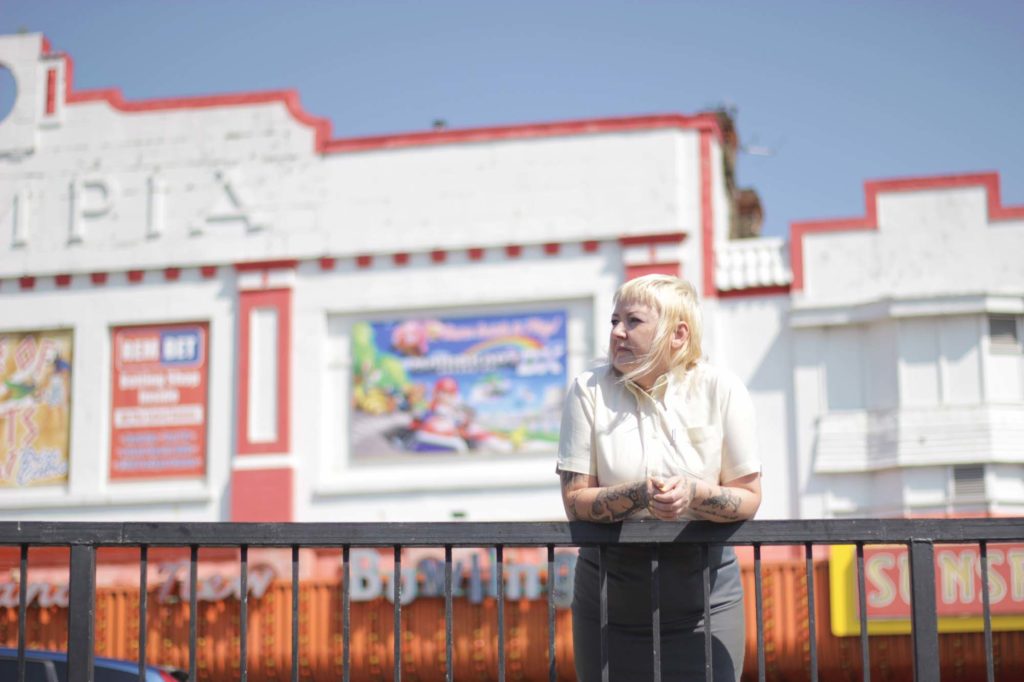 Southend continues to be a diverse town with subcultural groups expressing themselves through the clothing they wear and the music they listen to. This image is part of a series by artist Katharine Fraser who was commissioned to document the contemporary scene in the town.

For Carmel, the music is one of the most important aspects of skinhead culture – especially reggae and ska music. Southend still has a thriving skinhead scene which crosses over into the mod scene and regular nights are run in the town, as well as the Almost Grown weekender held every year. Carmel’s experiences living in the town as a skinhead can be heard within the exhibition.

The Beecroft Art Gallery is situated in the old Southend Library building, beside our Central Museum, and has a varied collection ranging from 17th century Dutch paintings to contemporary works, a fine collection of local views, and Southend Museums' historic costume collection. The annual exhibition programme includes displays of the…