Ever since the face of John the Baptist peered out at an astonished restorer working on Shakespeare’s Schoolroom & Guildhall, the mysterious fragments of paintings found in the former haunt of Shakespeare and his father have been slowly offering up their secrets.

The latest study of the building’s medieval symbolic decorations has been undertaken by architectural historian Dr Jonathan Foyle, whose revelations include the confirmation that amongst the internal wall paintings are the remains of a depiction of the Last Supper; a discovery of international importance.

Fragments of the Last Supper painting can still be seen, located in what is now known as the Master’s Chamber, built as the South Wing in the 1420s.

Experts believe the space was used as a refectory by the Guild, and on the wall can be seen 13 alternate red and white stripes with stylised sprigs below. Each stripe is capped by a shield of contrasting colour and inside each are the remains of a head with a halo, and although their faces were scratched out by religious reformers in the century that followed, the outlines remain. 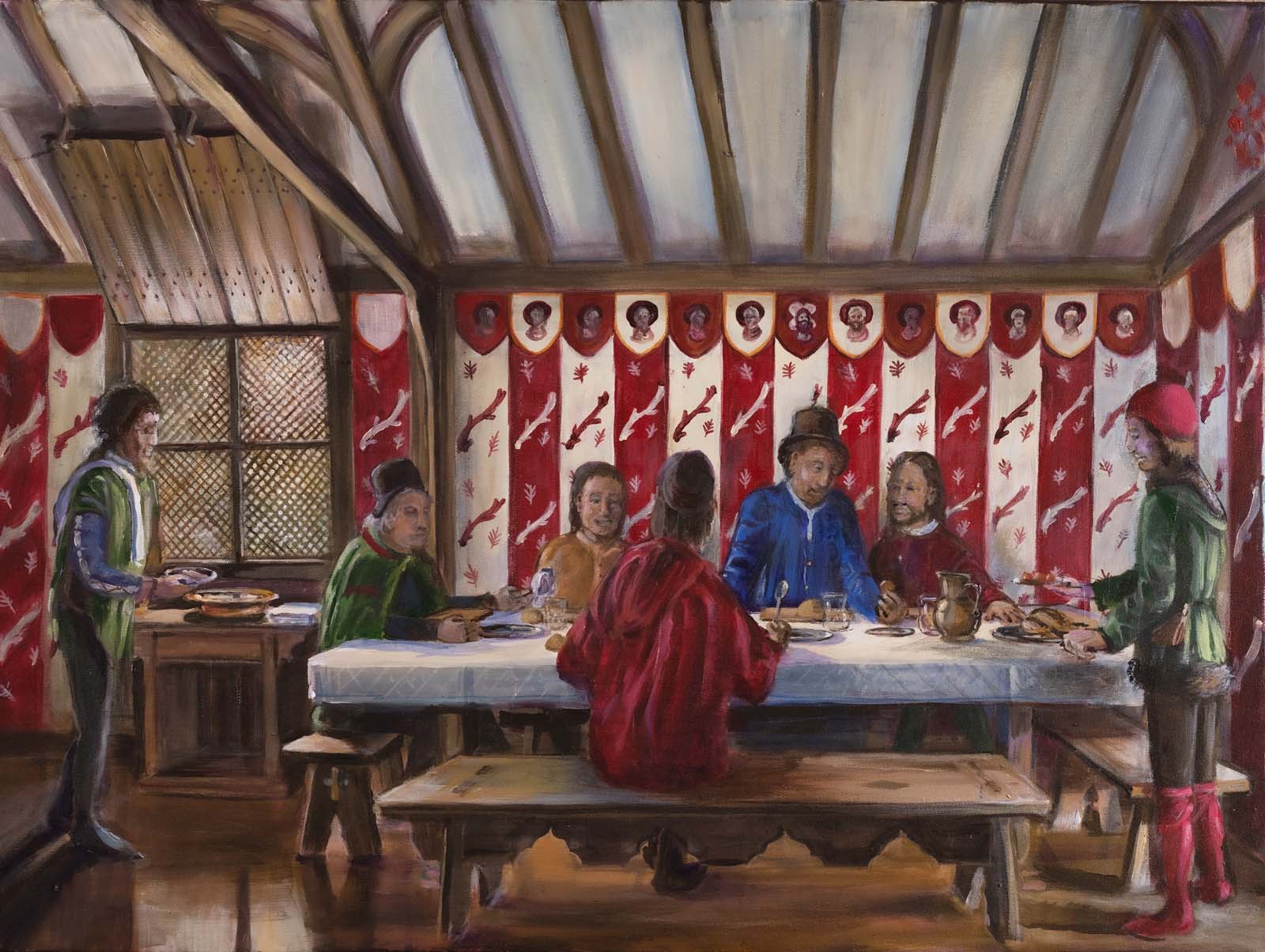 Intriguingly, it was during his tenure as Bailiff (Mayor) that William Shakespeare’s father John was said to be responsible for white-washing the Catholic wall paintings in the building that have been the focus of attention of historians today – their work made all the more challenging by the historic attempts to obliterate them.

However, the central head in the paintings still clearly displays the four-lobed halo of Christ and is identified in the middle of the twelve apostles at the Last Supper. In 1441 a new constitution was declared stating that masters and priests should take meals together regularly, which gives an implied date for the work.

“This places Shakespeare’s Schoolroom & Guildhall among the many European guilds, confraternities and monasteries who express their religious brotherhood through enactments of the Last Supper,” says Dr Foyle. “Fine examples of mural paintings of this theme can be seen in the refectories of 15th century Florence, but the most famous is Leonardo da Vinci’s version in the refectory of the convent of Santa Maria delle Grazie in Milan, painted half a century after Stratford-upon-Avon’s simple scheme.”

At the centre of public life for centuries, Shakespeare’s Schoolroom & Guildhall is a building that fulfilled many different functions; its key ones being as a Chapel, Court of Record and School, which of course is the Alma Mater of the young Will Shakespeare.

Unlocking the intriguing stories of the building has gained pace since work carried out in 2015/6 to restore and conserve it and open it up to the public revealed the fully formed image of John the Baptist on the timbers of a large scheme in the Priests’ Chapel.

The chapel was a space where priests of the Guild could say their private prayers beneath a painting of the Trinity, with John the Baptist and God the father cradling a crucified Christ, alongside the Virgin Mary.

This piece is now recognised as a Category 4 artwork, the highest grade and one which puts it on the same level as the Bayeux Tapestry.

John the Baptist. Part of the wall painting in the Priests’ Chapel at Shakespeare’s Schoolroom & Guildhall © Sara Beaumont photography

Dr Foyle has also undertaken an in depth study of the Priests’ Chapel, focusing on the arms of England that feature above the Trinty, which represent the King, and the newly identified arms of Richard Beauchamp, Earl of Worcester.

The Earl of Worcester lost his life at the Siege of Meaux in France in 1422, just five months before his King, Henry V. Until Dr Foyle’s work it had been assumed that the paintings were created in the 1440s, but the arms appearing together in this way indicates their souls being commended, and suggests the year of creation as 1422.

This and an association with Henry V, who was to feature in one of Shakespeare’s most famous plays marks it as a major component in the story of the building.

The study also looked at what have, until recently, been referred to as Tudor Roses. These decorative features are also found in the Master’s Room and had been attributed to the time from 1485-1603 after Elizabeth of York (the white rose of the House of York) married Henry VII (the red rose of the House of Lancaster) in January 1486.

However, roses had been prominent in churches and institutions for years before this famous Royal union as part of the dedication of the Virgin Mary; representing her son’s blood and conception through the Holy Spirit. That they remain so intact for visitors to see today is thanks to a ceiling that was inserted in the 16th century to contain the heat in winter, which meant they escaped the period of religious reform when shrines to the Virgin Mary were destroyed and burned.

They may have since acquired new meaning associated with the age of William Shakespeare, but the roses are now believed to be creations of much earlier in the 15th century.

The study took place over the last six months and the results of it are highlighted in a new film interpretation and original paintings created by Jonathan Foyle so that visitors can get a true insight into how the building would have looked with these, often colourful, pieces of wall art in place.

The research and interpretation has been made possible by two grants from the Culture Recovery Fund managed by the National Lottery Heritage Fund.

See where William Shakespeare spent his schooldays, discovered theatre for the first time and was educated and inspired to become the world’s greatest playwright. Your visit to Shakespeare's Schoolroom & Guildhall will bring to life William's time as a schoolboy, from about 1571 to 1578. You'll find out how his…