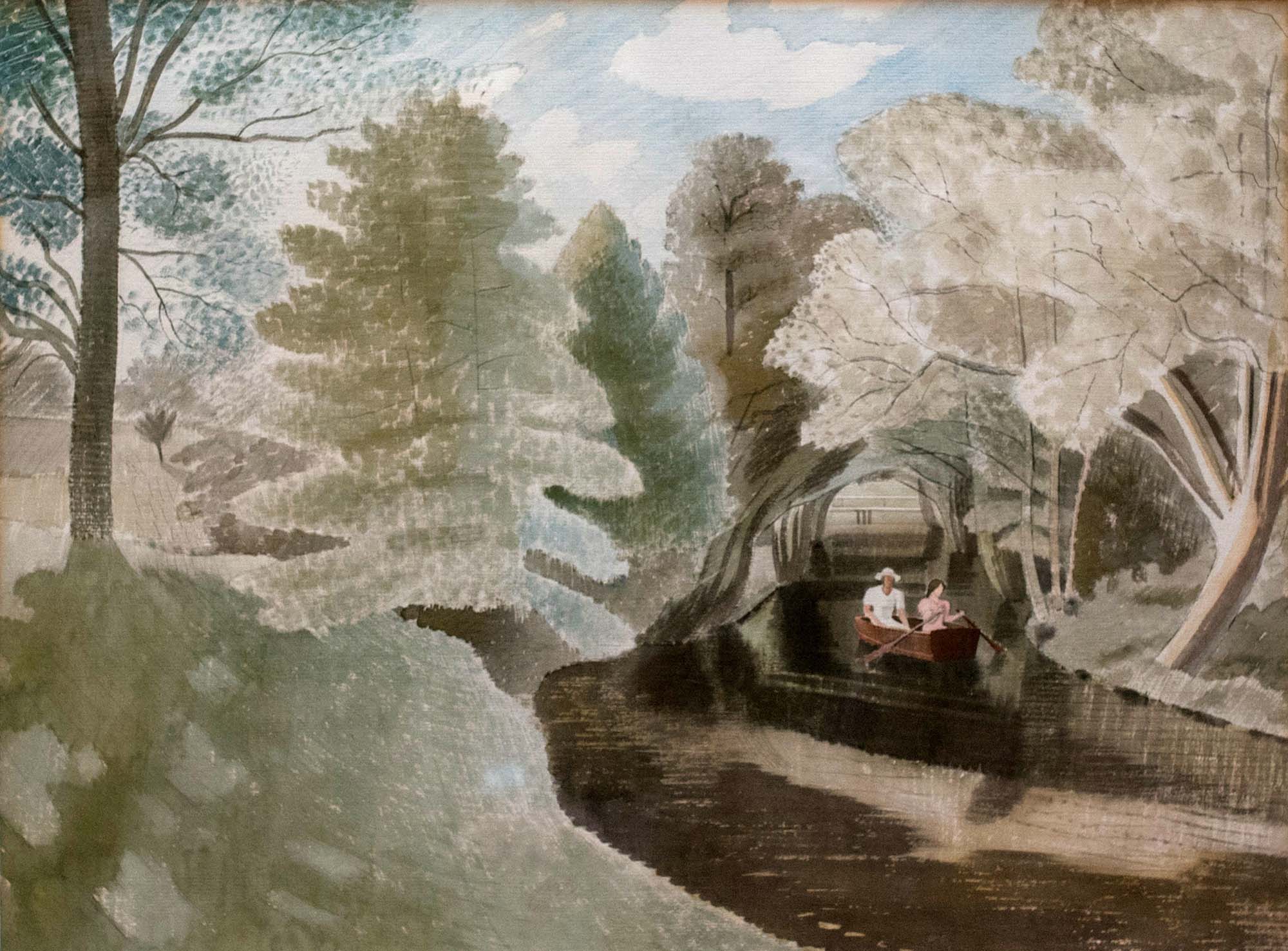 The Fry Art Gallery has a bit of a track record for this; reminding us of the wonderful world of Eric Ravilious, the artist whose cross hatched watercolours, designs and illustrations evoke a bygone sense of Englishness that is tinged with Modernism – but this time they have invited his wife, the supremely talented Tirzah.

The Gallery in Saffron Walden is home to the North West Essex Collection of work by artists who have lived in Great Bardfield and its wider area from the 1930s until today. Among the collection, which includes work by English mid-century giants such as Edward Bawden, Kenneth Rowntree and Michael Rothenstein, are one Eric Ravilious and his wife Tirzah Ravilious (later Garwood) who lived together in Great Bardfield and later Castle Hedingham from the 1930s into the early 1940s.

Eric and Tirzah’s life together was one suffused with art but interrupted by love affairs, war and, for both of them, an untimely death. Eric, an Official War Artist, died in 1942 aged 39 when a plane in which he was travelling was lost over Iceland. Tirzah died in 1951, from cancer aged 42. Amidst this tragic arc they had three children.

This exhibition built around these two fascinating figures draws on the extensive holding of work by Eric Ravilious in the Gallery, (which includes 15 watercolours) but it also embraces a large amount of work by Tirzah and is designed to tell the story of two artists, and their mutual influences. 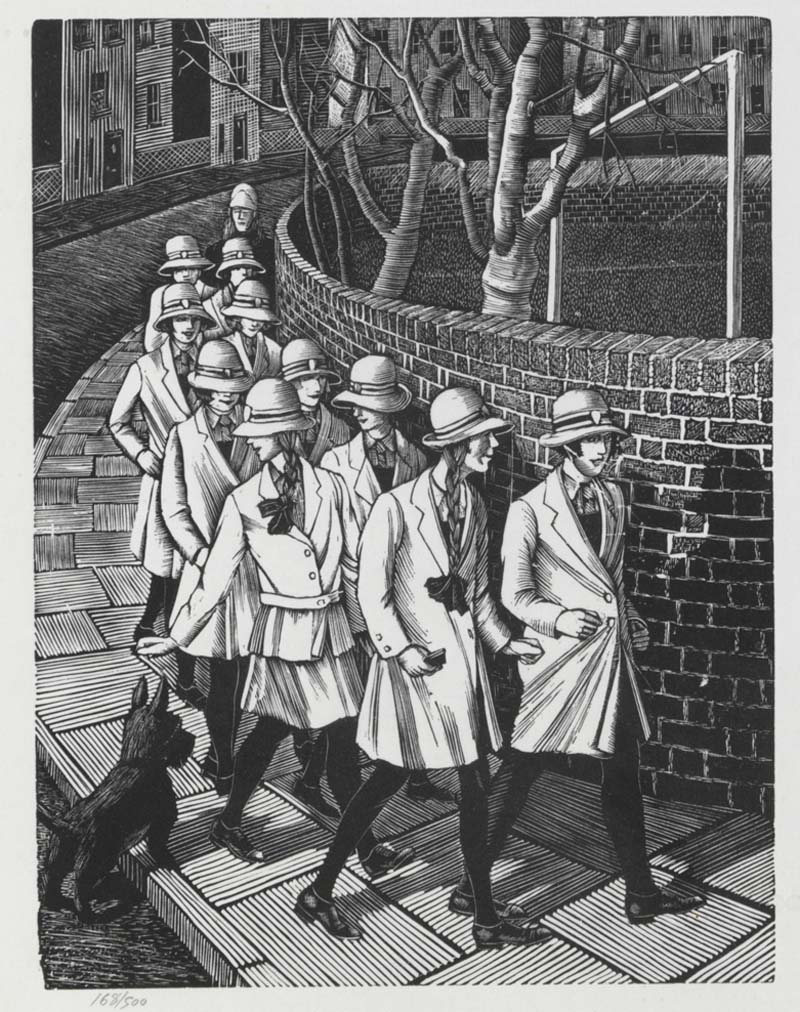 The Crocodile, wood-engraving by Tirzah Garwood. 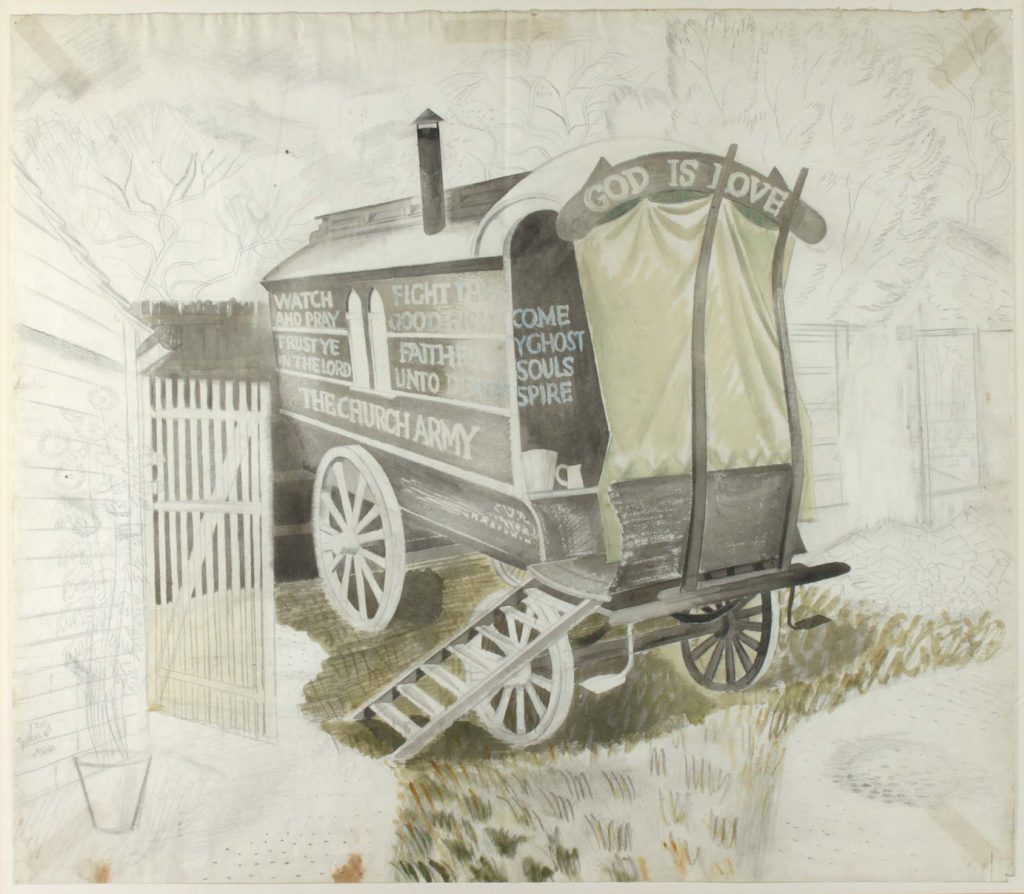 “What we’ve done is look at them in a chronological order beginning with Eric as Tirzah’s teacher at Eastbourne,” says Iris Weaver who is a founding Trustee of Fry Art Gallery Society.

“We have two very interesting watercolours done by Tirzah then (although she was more into wood engraving at that time), and when you look at them it makes you think “do they prefigure some of Eric’s work?” It’s something people can make up their own mind about, but it is quite interesting.”

The two painitngs, Barcombe Mill and Alciston were made between 1925 and 1928 while Tirzah was studying with Eric Ravilious at Eastbourne School of Art.

“Also with the wood engravings, certainly there are some like [Eric Ravilious’] Boy Bird Nesting (1927), that when you look at them, make you think: ‘is this a Tirzah or is it an Eric?’” adds Weaver.

Tirzah’s wood engravings, first exhibited in 1927 while she was still at the School of Art, are remarkably well composed and cut, offering a slightly idiosyncratic view of life, be it of relatives, or street scenes or married life. They were well reviewed in the national press at the time.

Examples of the couple’s wood engravings are displayed here side by side, offering a rare chance to compare the development of their technique and influence on each other, and by the time they married 1930 they were both members of the Society of Wood Engraves.

After a short spell in London the newly married couple settled in Essex, first in Great Bardfield and subsequently Castle Hedingham and Wethersfield. It was in Essex that they had their three children together: John Ravilious; the photographer James Ravilious; and Anne Ullmann, who is an editor of books on her parents and their work. 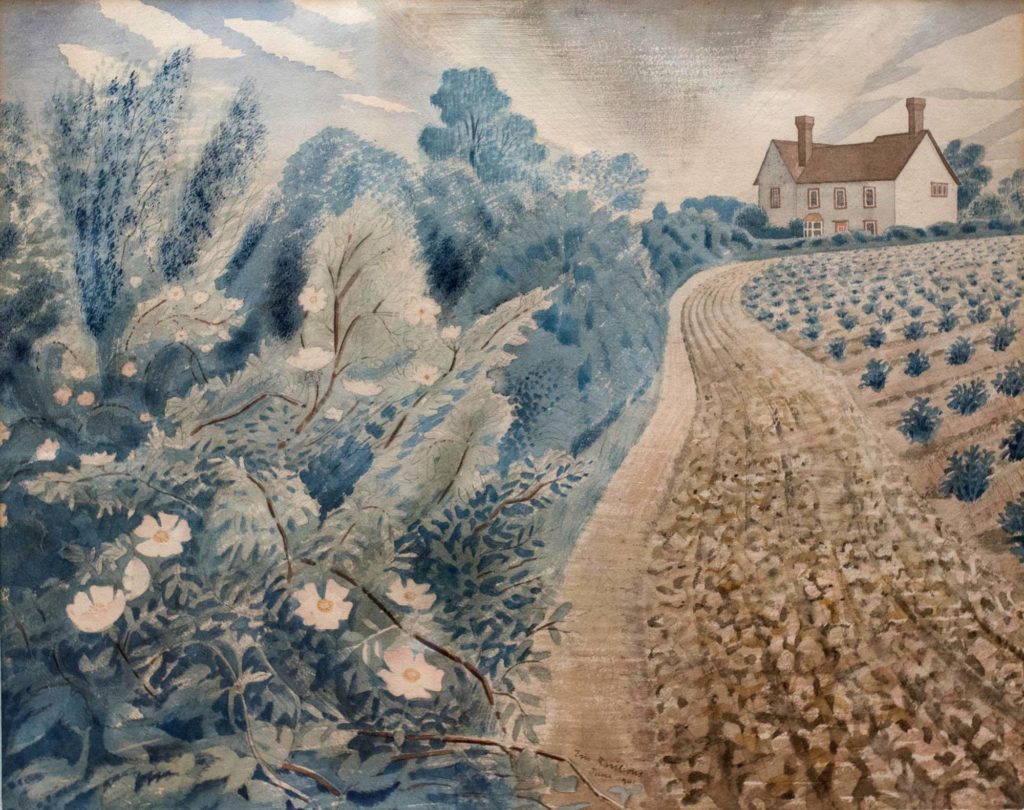 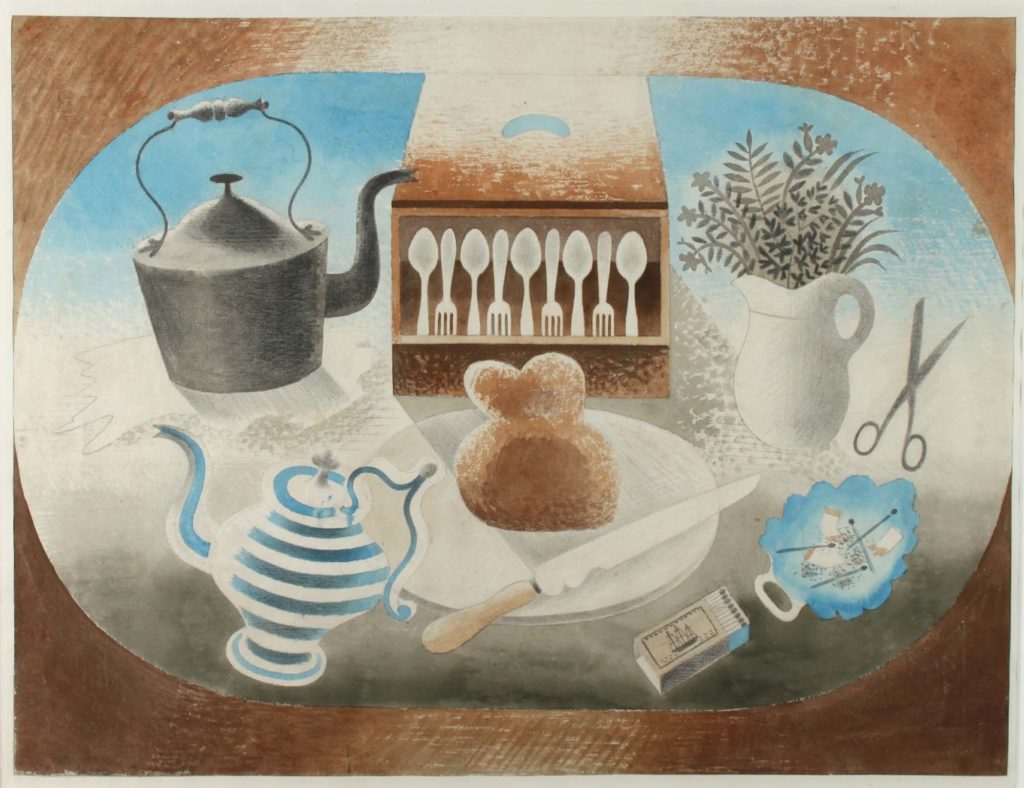 But family life and motherhood soon overtook Tirzah’s artistic life and while Eric fed his burgeoning artistic career with visits to rural Sussex, paintings trips with Edward Bawden, commissions for the Curwen Press and Wedgwood, Tirzah, who was by now an able an admired wood engraver, developed homespun artworks.

The marbled papers which she made initially with Edward Bawden’s wife, Charlotte, and which were available for sale, are now highly thought of.

“She made the marbled papers commercially. They cut out lampshades from them and I believe they were sold at The Little Gallery,” adds Weaver. “And we do have some evidence that Tirzah’s papers were used in the same manner that Edward Bawden’s wallpapers were.

“We have a painting by Eric called Still Life with Acanthus Leaves, and in the background are what look like the motifs of Tirzah’s marbled papers. He might well have just invented that rather than them actually being on the walls, but I like to think that they might have been.”

After the death of her husband during the war and despite battling cancer whilst bringing up a young family, Tirzah began painting on oils and the exhibition offers a rare chance to see some of her later works together like Prehistoric Encounter (Moonlight Meeting) (1950) a strange painting which seems to open onto an imagined world.

Tirzah also began constructing what have become known as her boxes, which are oil and mixed media constructions.

“They were very unusual and sometimes they had things like a model train or a doll inside,” says Weaver. “It’s difficult to really categorise them, and the later oils. They’re not really naïve but they are very imaginative.” 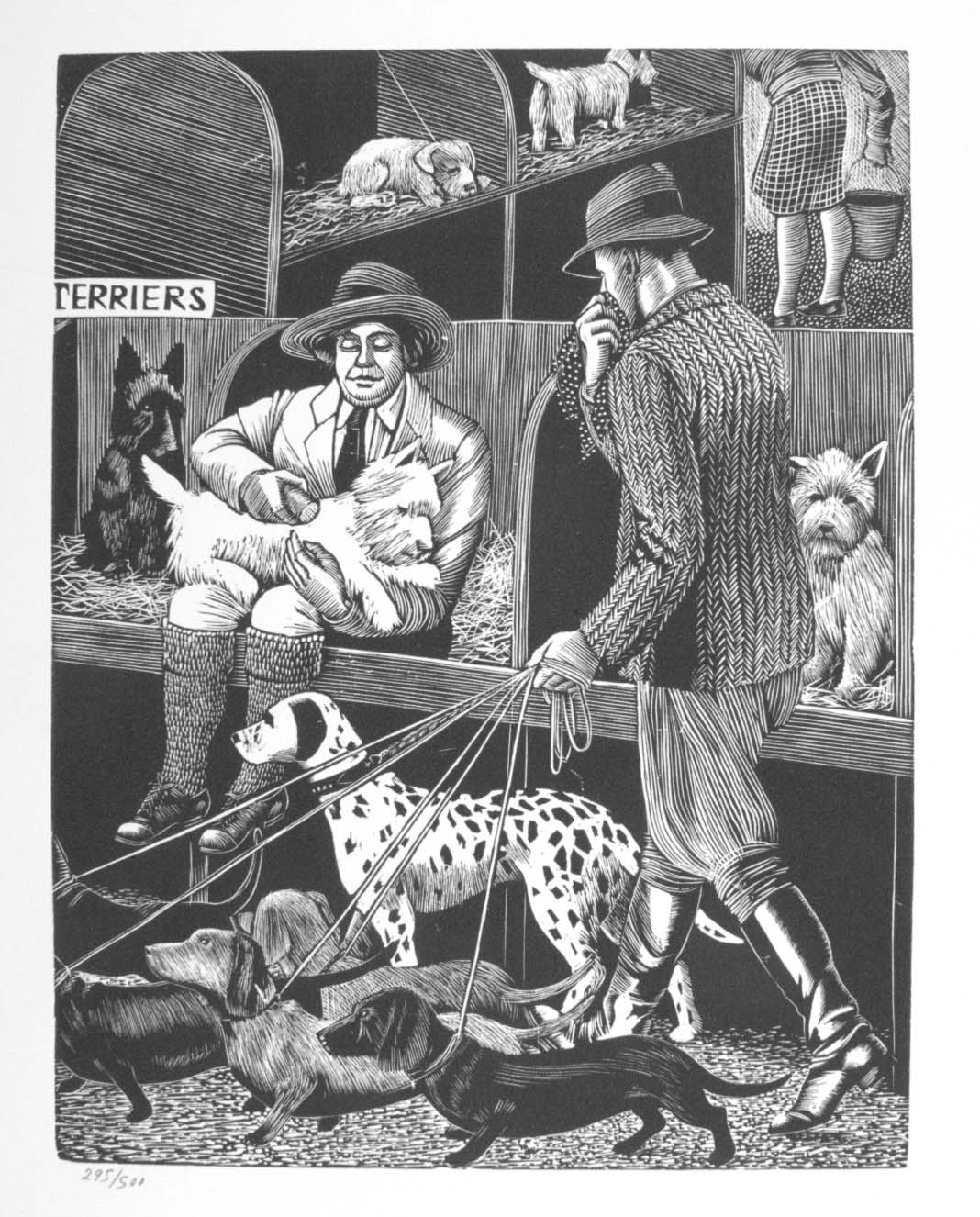 The Aunt, wood-engraving by Tirzah Garwood 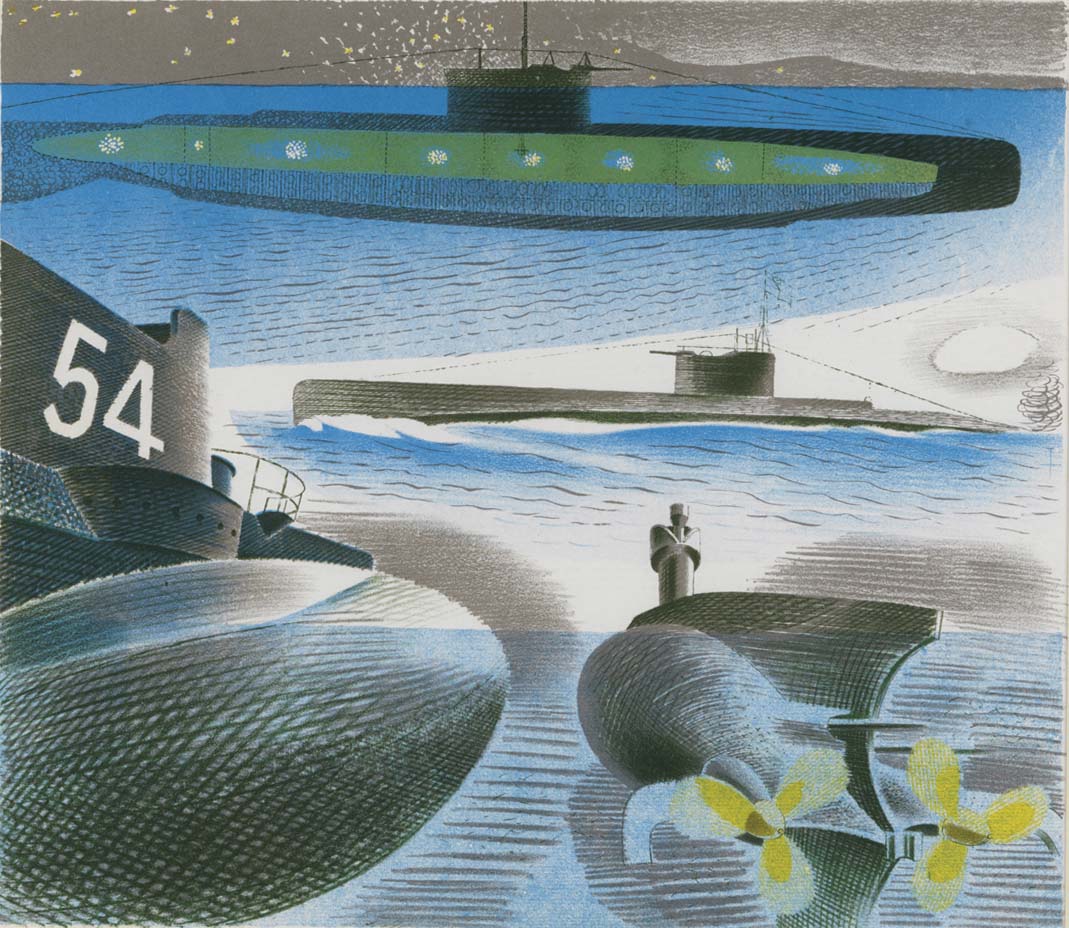 These later works may be new to many visitors but this isn’t the first exhibition to bring Tirzah out from the shadow cast by the popular paintings and design work of her husband.

She was the subject of two earlier Fry exhibitions in 1994 and 2012 and a 2017 Towner Art Gallery exhibition and accompanying book by Andy Friend, Eric Ravilious & Co. The Pattern of Friendship, made a case for both her talent and her influence.  The 2012 release of her autobiography, Long Live Great Bradfield, which she wrote in fragments when she was coming toward the end of her life, has thrown further light on her often tumultuous relationship with Eric.

But the Fry is the first to give the two artists their own side by side exhibition and the gallery see it as an opportunity to evaluate Tirzah’s work in her own right, rather than continuing to be, as the editor and typographer Robert Harling put it in 1987, “virtually extinguished by the steadily growing fame of Ravilious’s achievements.”

This realistic assessment was echoed by Saffron Walden based artist Olive Cook in 1994, who wrote of a Fry exhibition, “the odd, entrancing, high- spirited and at times sinister world of Tirzah Ravilious still awaits its explorers.”

That said, this is a show about an artistic couple and the way their work developed alongside each other. Fans of Eric Ravilious are treated to some well-known and not so well known works by him. As well as favourites like the Submarine Series of Lithographs (1941) The Attic Bedroom (c1934) and Tea at Furlongs (1939) there are pieces like the wonderful Kettle, Teapot, Breadboard and Matches which was an embroidery design for Dunbar Hay and the classic but little seen Church Army Caravan (1935).

Eric wrote of the painting to his lover Helen Binyon in November 1935 from Castle Hedingham: “You won’t get a letter from me now because a Church Army Van, plastered with texts, has taken up a position in the village and I want to make a drawing before it goes away. It is a beautiful object, dark green with white lettering all over it.”

The Fry also displays one of the last pieces Ravilious produced, the unfinished watercolour Demonstrating a Machine Gun (1942). 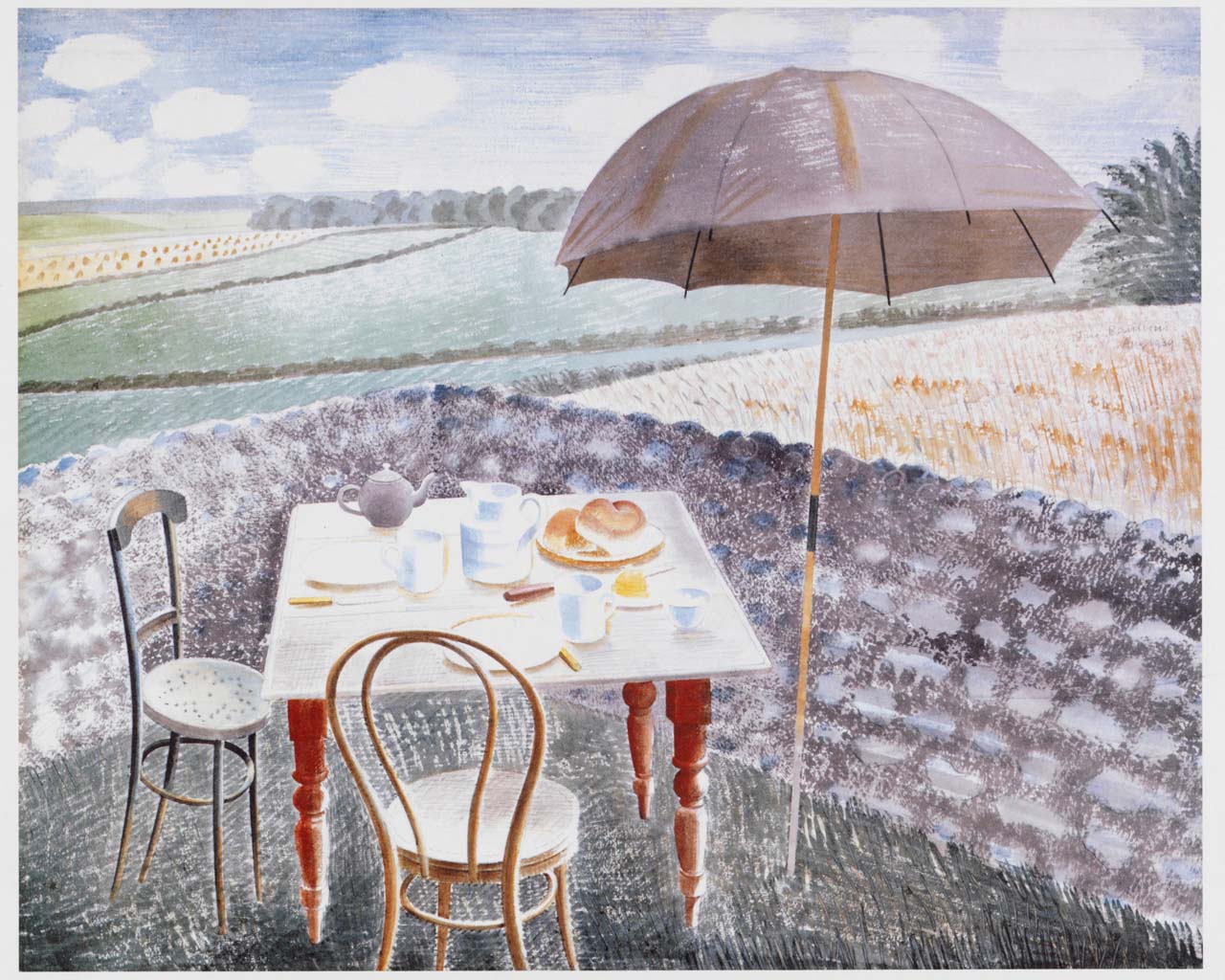 “It is a very tragic tale really,” adds Weaver, “because one died at 39, and the other one died at 42, leaving three young children.”

“But it’s definitely about the relationship in the art, almost entirely. We haven’t touched on their relationships, but quite apart from that, they did stick together, whether they would have done ultimately we don’t know, but they did.

“We felt that we wanted to really put them together. We have found a slightly new angle, and yes we’ve done our best to put Tirzah on the map as well. We don’t know where she would have gone from there any more than with Eric, but I think she deserves it.”

Mr and Mrs Ravilious is at the Fry Art Gallery, Saffron Walden from April 7 – October 27 2019.

The programme of events includes a wood-engraving workshop, talks and special guided tours of the localities and sites around Great Bardfield familiar to the two artists.

The Fry Public Art Gallery houses an impressive number of paintings, prints, illustrations, wallpapers and decorative designs by artists of the 20th century and the present day who have local connections and have made a significant contribution to their field. There is a special emphasis on those who for a…