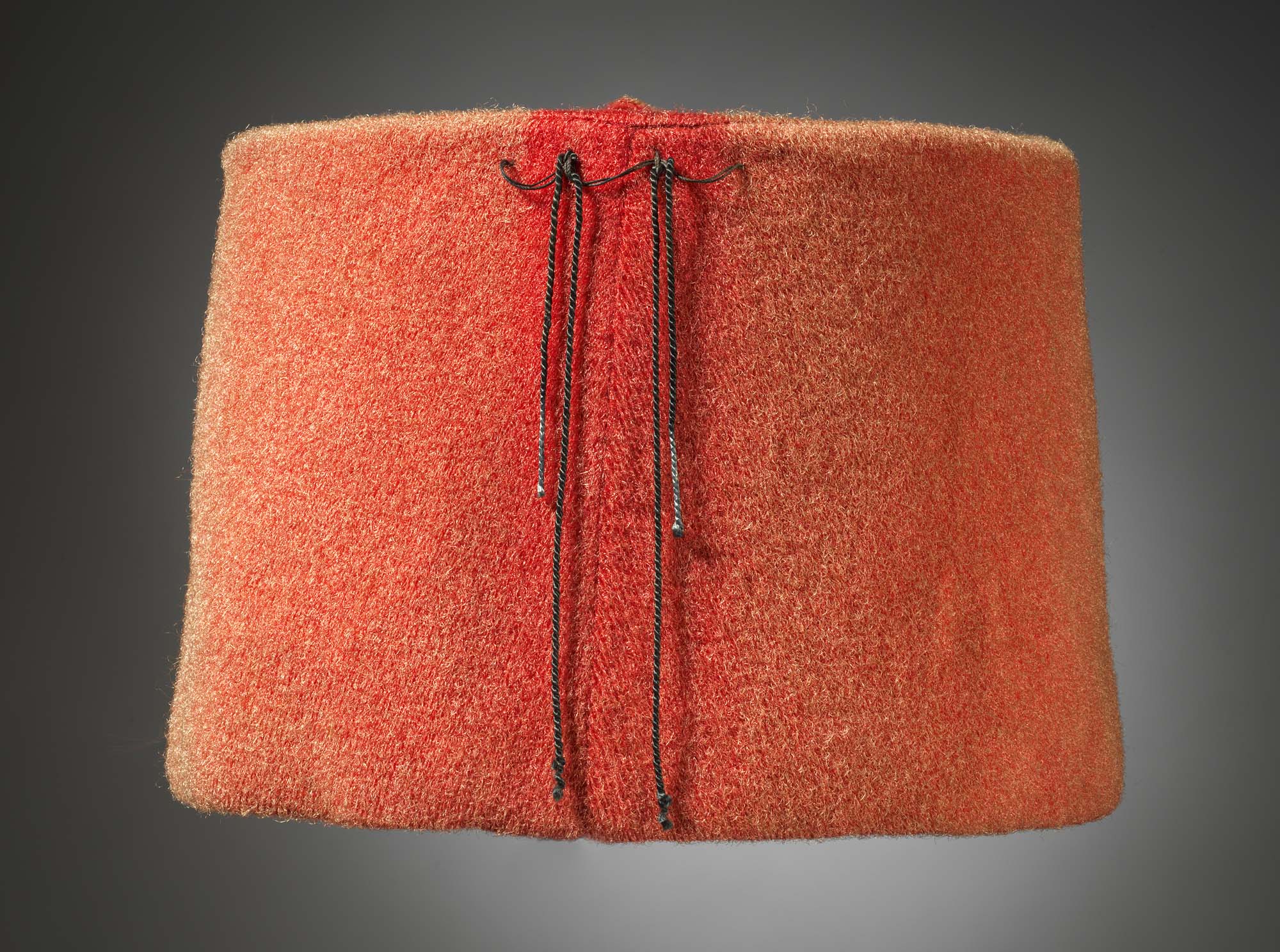 Simon Sladen, Senior Curator of Modern and Contemporary Performance at the V&A, on the Tommy Cooper collection which was acquired from the family of the late, great comedian in 2016

There’s a wonderful incident in Tommy Cooper’s life where he goes to Morocco on holiday and there’s a market where they are selling fezzes. The guy selling the fez says “just like that!” to him and Tommy Cooper says, “Oh that’s my catchphrase,” and the guy says, “I don’t know about catchphrases but everyone who comes here says ‘just like that’!”

I love that firstly because Tommy Cooper is the first person to not say ‘just like that’ at the market stall – and it’s his catchphrase! But I think it shows this knowledge of the catchphrase without needing to know who Cooper was.

I used to teach drama to 18 year-olds and we used to have a fez as part of the costume dress up thing, and they would all know with the hand gesture ‘just like that’. It just seems to have passed on from generation to generation.

Of course he’s still very, very popular. There’s been a lot of interest recently in his life and biography, there are quite a few people touring the UK at the moment with Cooper tribute shows and keeping him alive in that way. 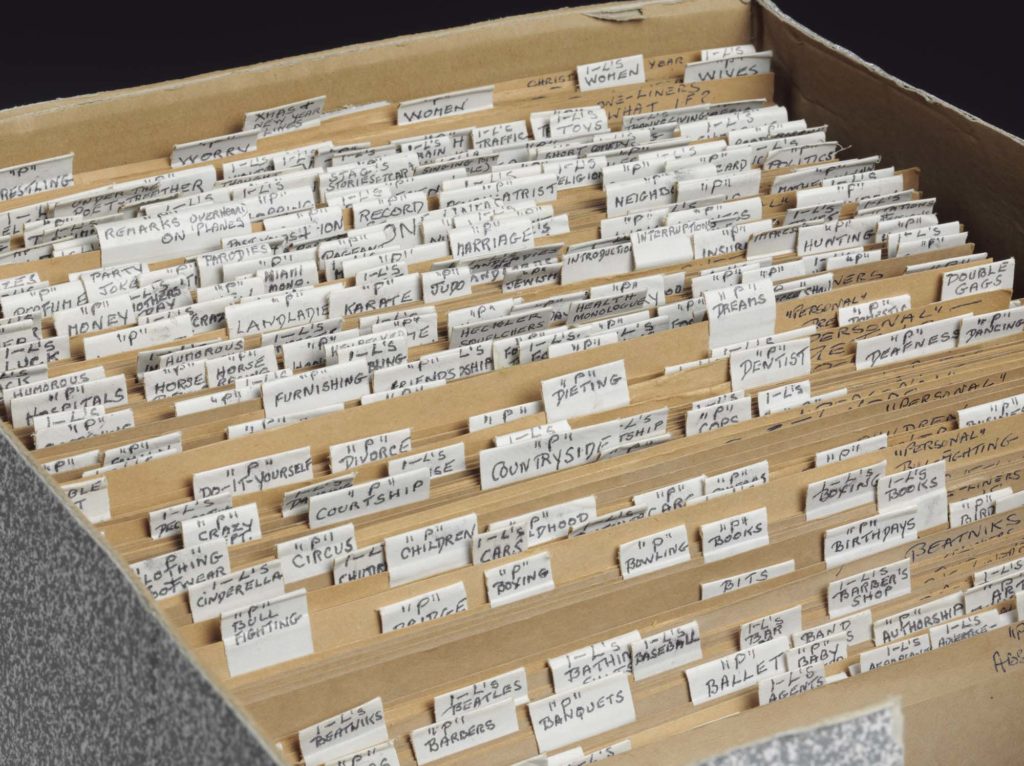 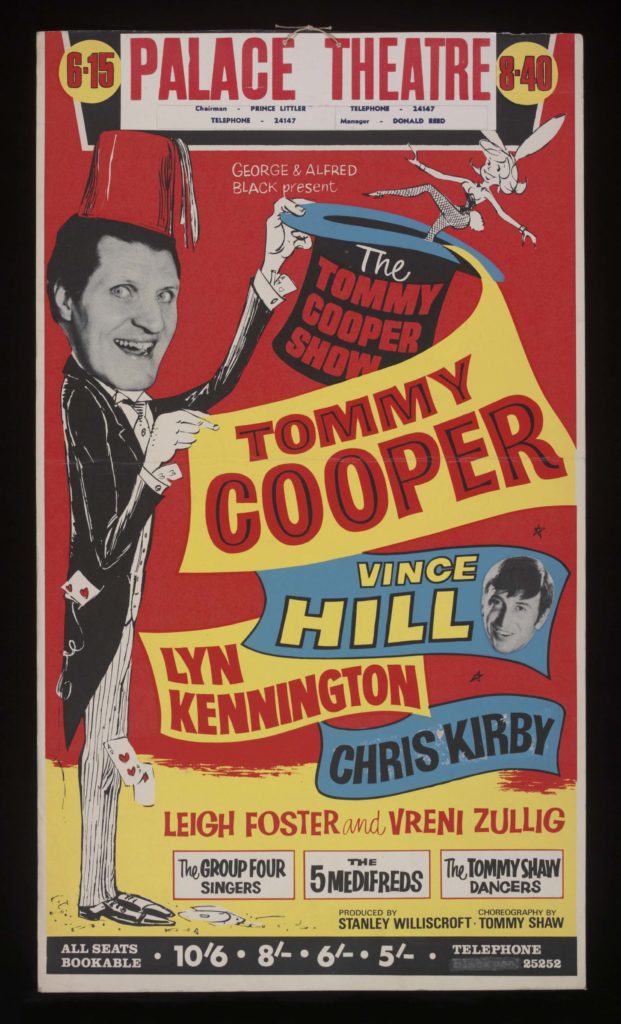 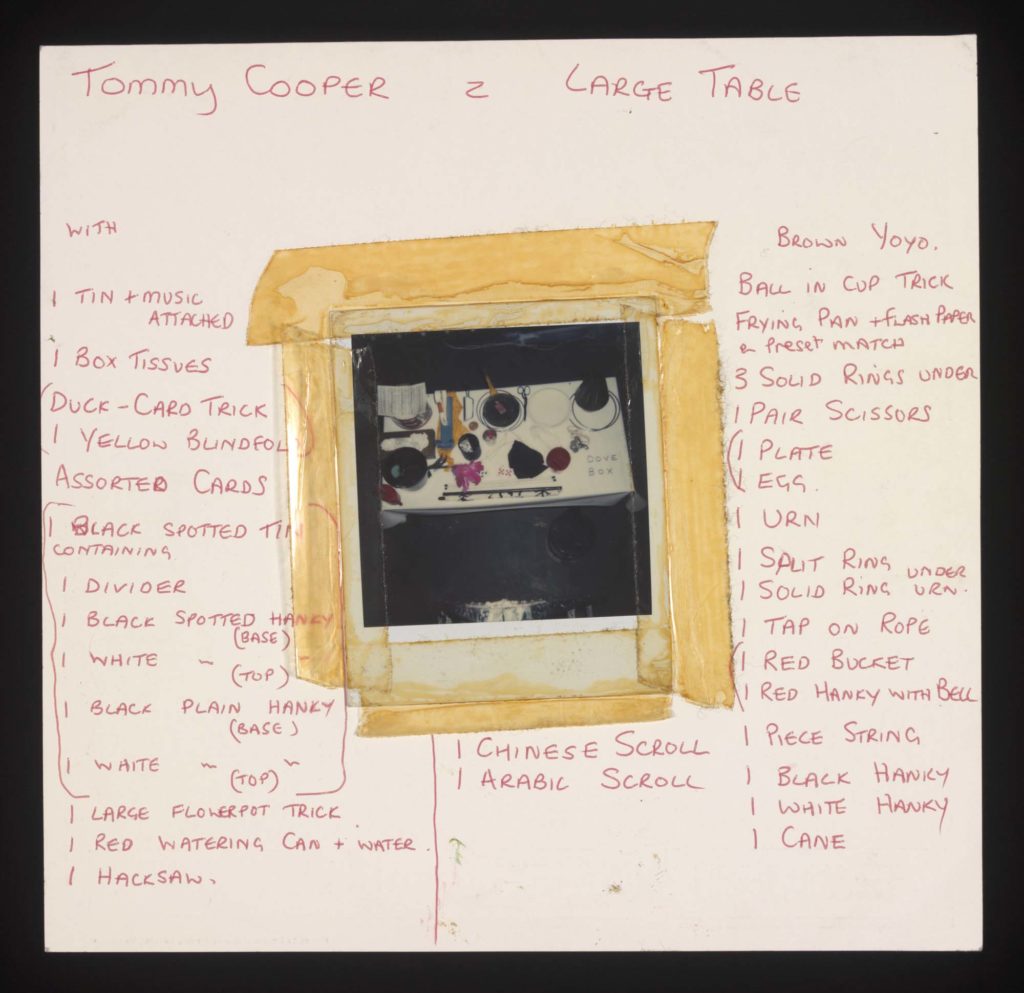 We acquired the collection and there was a lot of press in September 2016 and Tommy Cooper was humungous in the Netherlands, absolutely huge, so it was all reported very widely over there and a producer of television adverts got in touch and said, “I have a fez from when I was going to be producing a Bassett’s Wine Gums ad featuring Tommy Cooper”.

The ending of the ad was going to be the fez with the juice all sort of exploding out of it – you can imagine just what it was going to be like. So he got in touch and very kindly donated the fez.

He had actually seen Tommy a few days before he died. He’d been sent here to basically talk through the ad, get the fez so the special effects team could work on it and to check everything was all good. And of course he reports back that everything was fine and dandy, and sadly a few days later Tommy Cooper dies live on TV during, ‘Live From Her Majesty’s’.

But to have that real iconic item joining the Tommy Cooper collection was wonderful. We’ve also got his head twister prop, some trick billiards, we’ve got cards, we’ve got the milking stool that milks itself and of course we’ve got the gag file, which is the thing that caused a lot of interest.

It’s a fascinating insight into his practice and his process. It’s very meticulous, all filed alphabetically with a topic tab; that might be anything from children, or birds, or tables, and then within that is a further classification system, “1L” for one-liners and “P” for personal, which is the “I was walking down the road the other day” or, “this happened to me” gag. Then there’s another run of them for stories – the slightly longer, shaggy dog tails.

So that was the process; he typed his gags up but there were a number of sources that he got them from. One was the Fun Master Encyclopaedia of Classified Gags that he purchased in America, it runs to many, many volumes, and he’d look through that and then would mark it with a diagonal cross if he was interested. Then he would have another diagonal cross when he had written it up, to show that he had transferred it to the gag file. Of course these were American so he tweaked them for the British market. 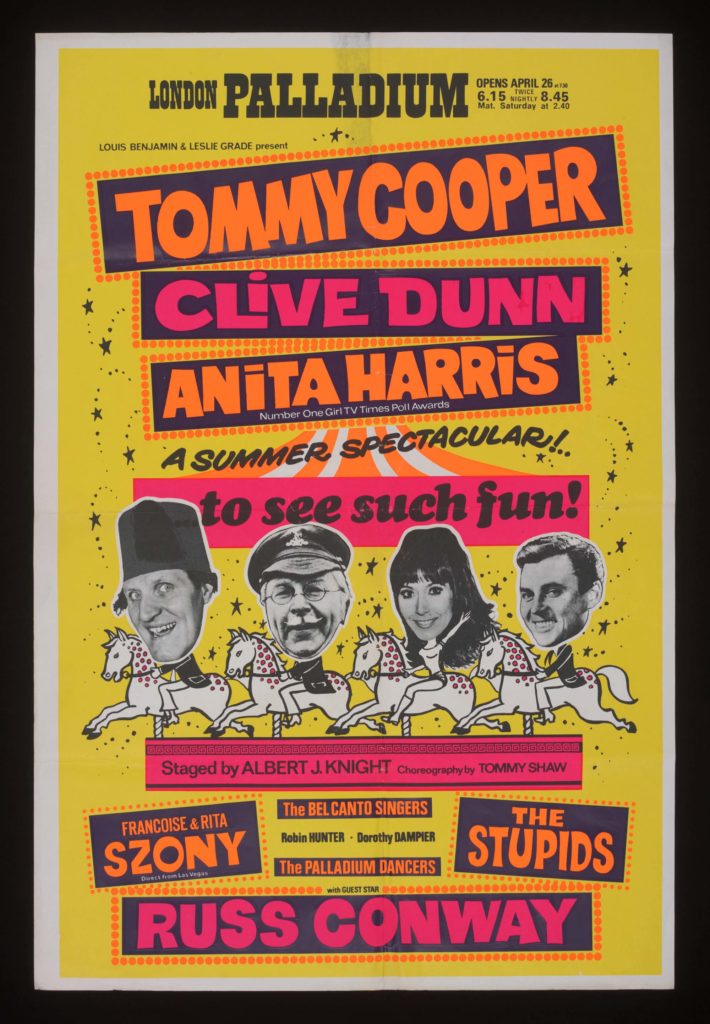 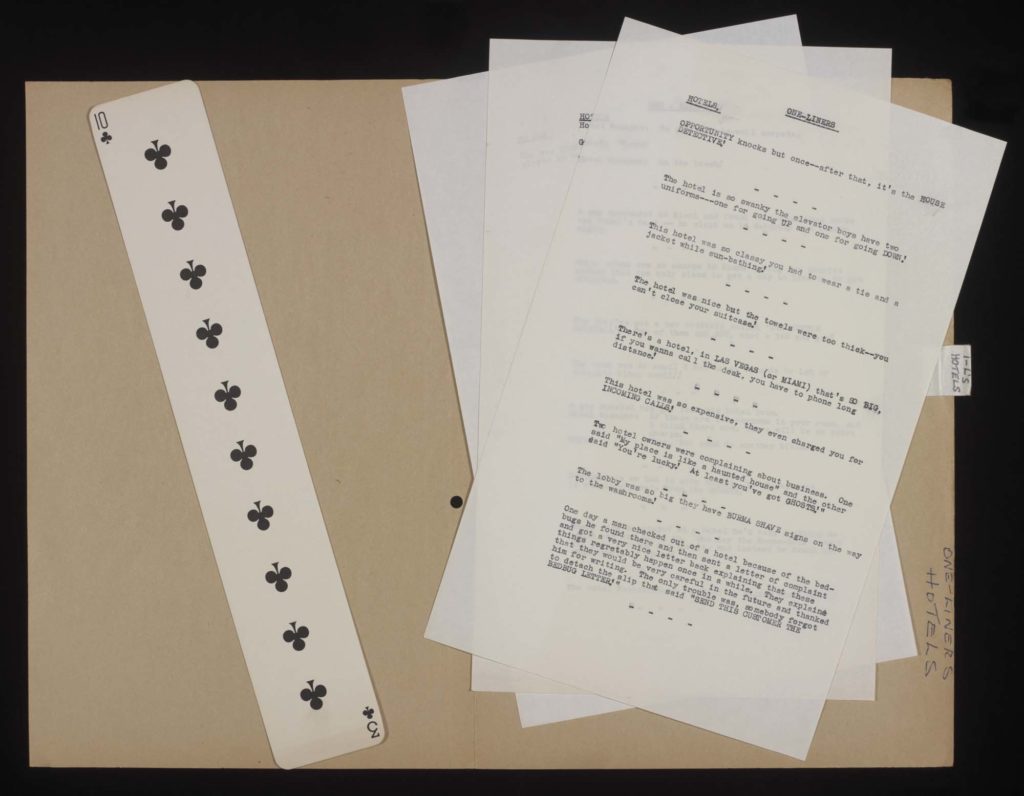 In addition to the gag file are a number of pieces of card and upon them are jokes that he’s written down in his own hand. And what’s interesting is there’s only one or two notebooks, and they are from early on in his career, most of the gags that we have are written down on pieces of card. This might be the back of a playbill that has been ripped in half, or it might be the inner from shirt packaging. It’s fascinating.

As well as those we’ve got his set lists, so you can see his thought processes: “First I’ll do the bottle gag, followed by X, Y, Z”.

We also have the magic catalogues from where he might have bought things from, and his scripts from the many, many series that he did. Whilst we were going through we realised how many ways the producers got Tommy Cooper in; you’ve got Cooperama, Life with Cooper, Tommy, all these wonderful series and TV specials. And written by such an array of people, from Barry Cryer to Eric Idle.

“Here is a man who is always refining his craft, always saying “what is funny now?””

There are also some photographs and lots of negatives in there, contracts, and the joke bulletins that he subscribed to. There’s the props and table plans – fascinating Polaroids of the table in situation with notes written around the edge to ensure that when it was set up at the next venue it was in exactly the same place. We also have some business correspondence.

But what is really fascinating is the structure, the classification and the systems that he put into place. Here is a man who is always refining his craft, always saying “what is funny now?”

Some pieces have different coloured ticks next to them indicating success at different events or evenings and he’s always looking at what is funny at this moment, always wanting to ensure that he gets the laugh and to really study the nature of comedy, what makes people laugh and what’s inherently perhaps funny in a certain word or a certain scenario or situation.

It’s very methodical and meticulous. His playful nature and this outward appearance of being shambolic, of knocking things over on the table, of forgetting what he is doing next, it’s incredibly, incredibly skilled, much like Les Dawson’s comedy piano playing. You have to be incredibly skilled to be able to pull that off and be someone who really cares about the craft. 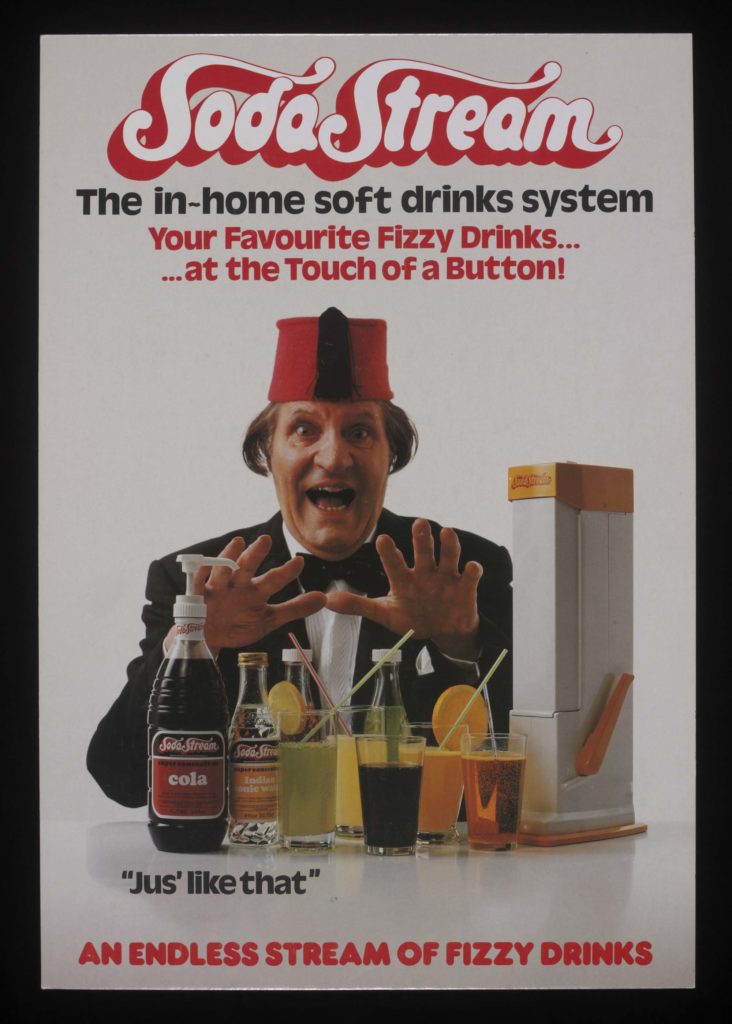 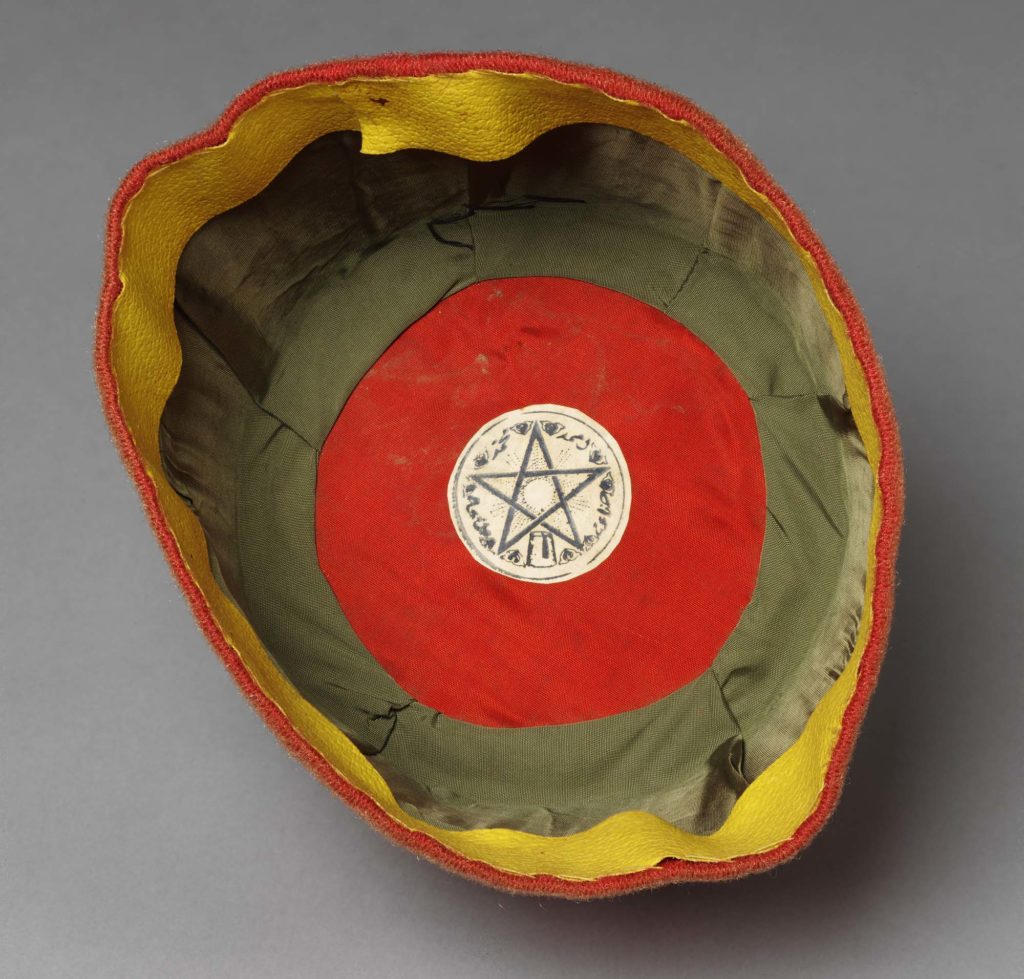 Comedy is a relatively new area for us as a national collection here at the Victoria and Albert Museum, but we do have some other comedy collections such as the Ronnie Barker Archive which was donated by his family and other collections that touch on important people from the history of comedy such as Little Tich (Harry Relph) the music hall comedian.

But it is a growing area for us and a wonderful part of the collection because most people have a reaction to it.

I think there is a nostalgia for comedy because we always remember those, as cheesy as it sounds, ‘warm moments’ of being made to laugh on TV. These moments were not experienced on your own on an iPod on your headphones, you were watching them with your family or with friends and I think that’s part of it, that sense of a shared community, the shared acknowledgement of those cultural markers in those jokes.

Find out more about the Tommy Cooper Collection at www.vam.ac.uk/articles/tommy-cooper-collection