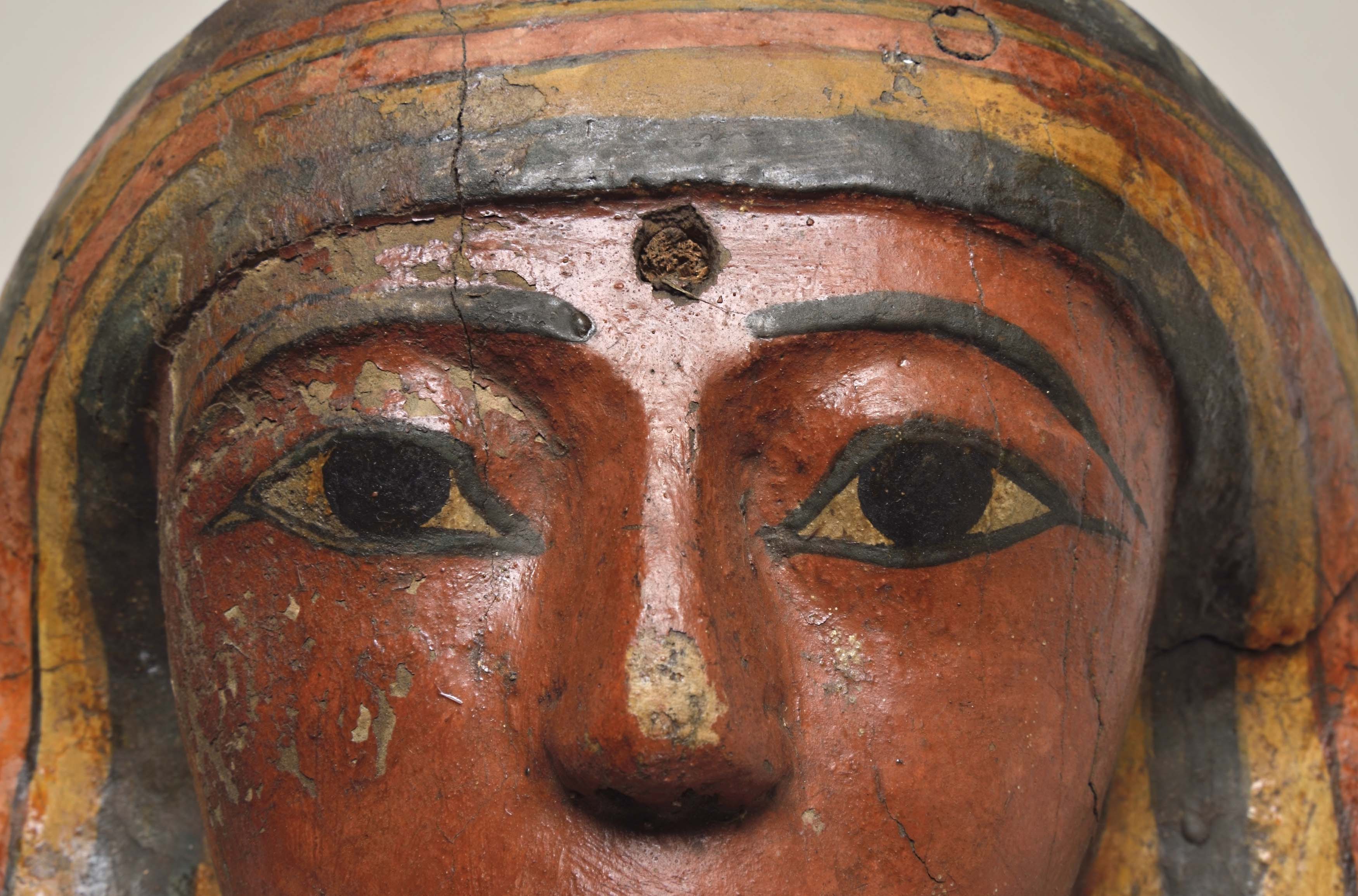 World Museum Liverpool has opened its new Egyptology gallery, showcasing one of the best collections of its kind in the UK. Here are some of the stunning objects you will see when you visit 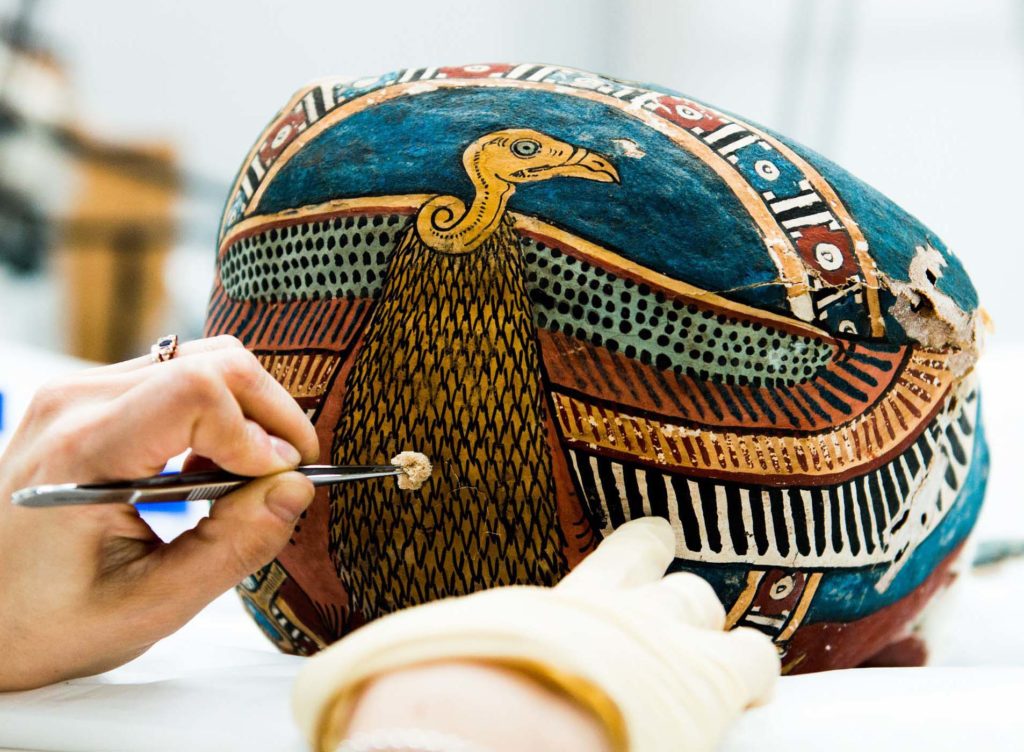 A mummy’s mask in conservation. © Courtesy of National Museums Liverpool.

This beautiful but fragile cartonnage mummy mask dates from the Ptolemaic Period (332 BC – 30 BC). It came to the museum from the collection of Revd. William McGregor who amassed a huge holding of Egyptology in early 20th century. His father owned a Liverpool iron foundry.

The gilded mummy was in a fragmentary state, but it has some beautiful detail like this magnificent representation on the crown on the head showing the vulture goddess Nekhbet with her wings outstretched and patterned. The whole mask is beautifully adorned with the facial features painted in black overt the gilding.

A stippled pattern has been used to decorate the main body of the mask and there is a beautiful pattern of red and blue rosettes in a band across the back of the headdress. It has never been displayed before.

The Book of the Dead

The Book of the Dead. Ptolemaic Period (about 332 BC) Excavated at Hissaya by Liverpool University, 1905 © Courtesy of National Museums Liverpool.

Thousands of copies of the Book of the Dead were made between 1550 and 50 BC but most are now just fragments. The one you see here is almost complete – just one end of the fragile papyrus is crumpled. More than 2,300 years ago it was rolled up and buried with Djed-hor, a man who lived near the great temple of Horus at Edfu.

In 1905 John Garstang discovered it in Djed-hor’s tomb and carried it back with him to Liverpool. It was a rare discovery but one that was forgotten about until 1974 when it was unrolled. For the first time the museum is able to show all four metres of this rare survivor together. 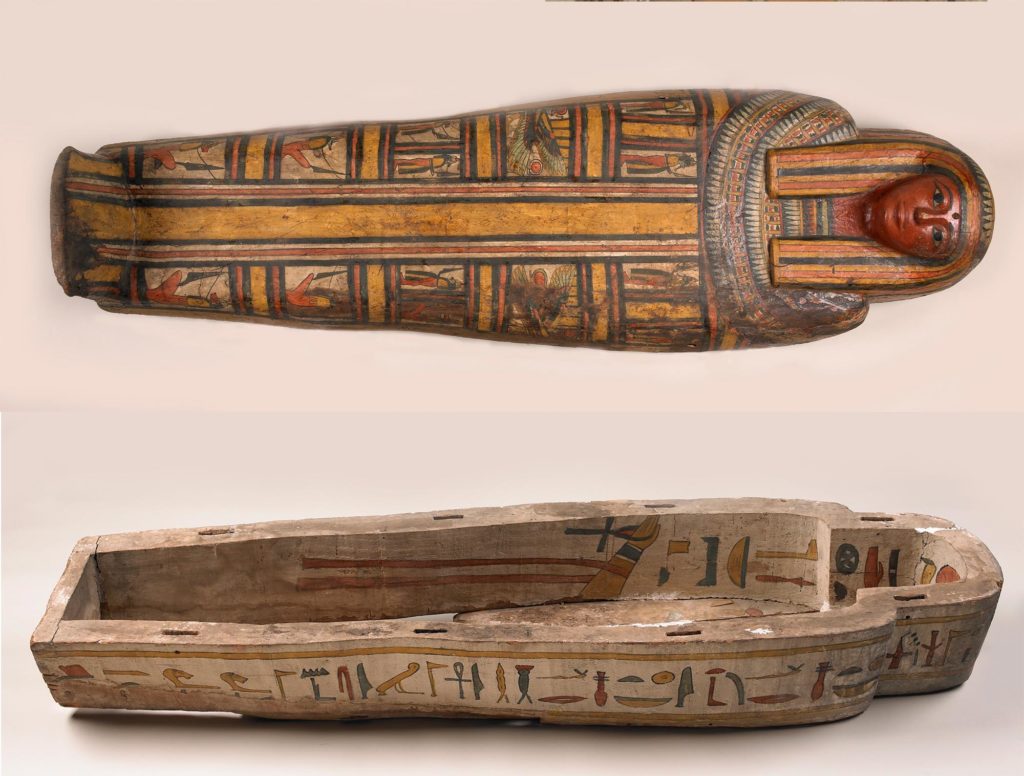 The coffin of Haty. © Courtesy of National Museums Liverpool

This brightly painted coffin belonging to a man named Haty from 8th century BC Thebes is superbly decorated both inside and out. The coffin comes from the collection of Sir Robert Mond of Wigan, an industrial chemist whose chief recreation was Egyptian archaeology. 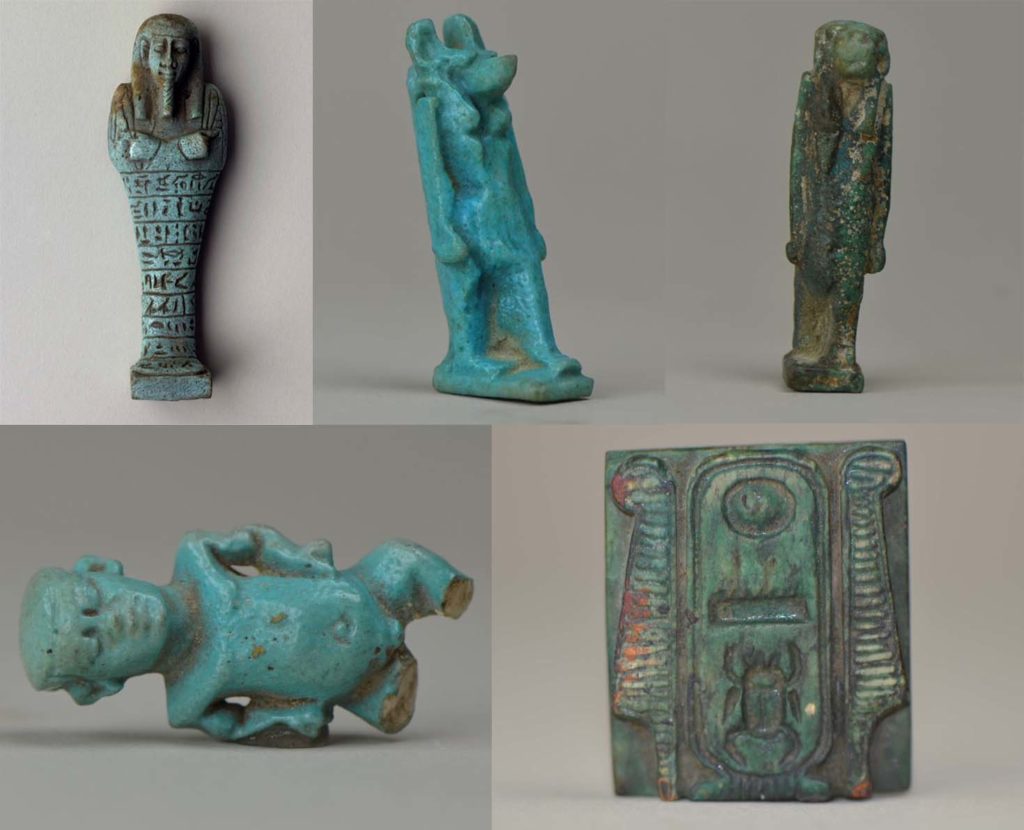 These ancient Egyptian amulets were collected by Florence Nightingale when she toured Egypt in the winter of 1849. She was however disappointed with much of her haul – writing to her sister that none of them “reminds me of what I have seen, nothing that savours of my Karnak”.

She did prize a set of Ramases seals which she believed to be from the tombs of Thebes. They are however the only fakes in the collection of amulets, which she described as “shabby”.

The mask of Hor Wen Nefer 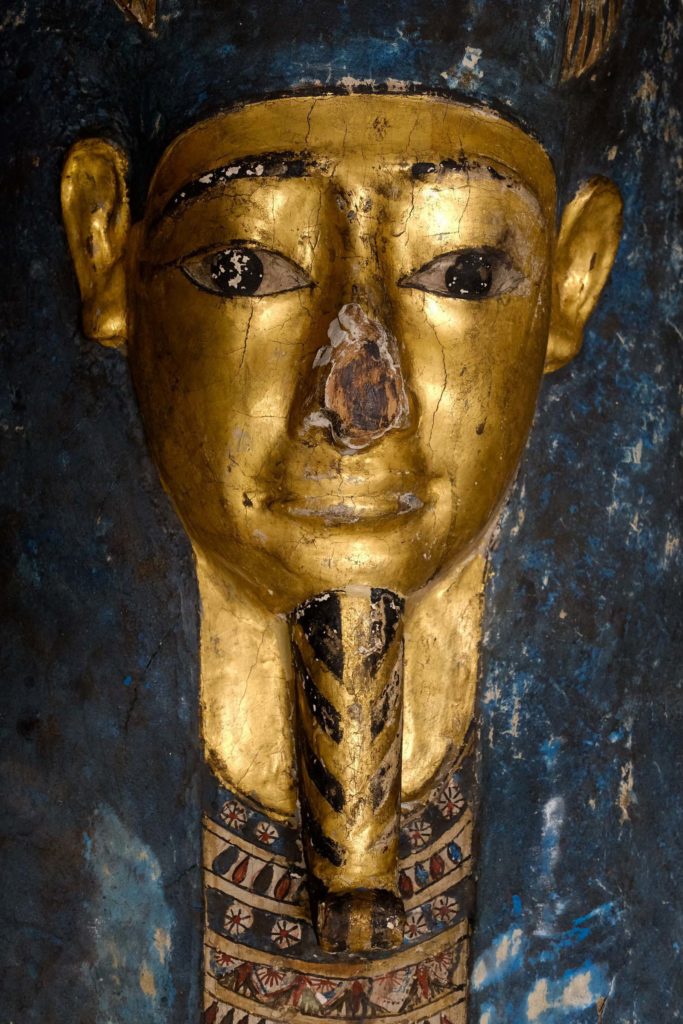 One of the treasures saved from the wreckage when the Museum’s collection of Egyptian antiquities was decimated by the Liverpool Blitz of 1941, this mummy and his coffins have not been on display since.

Hor-wen-nefer was a ‘royal relative’ who lived at a time when Egypt was under 300 years of Macedonian Greek rule which ended with Cleopatra VII (‘the’ Cleopatra). His coffin with a gilded face was described in 1839 as being one of the finest and best preserved of the kind in existence. 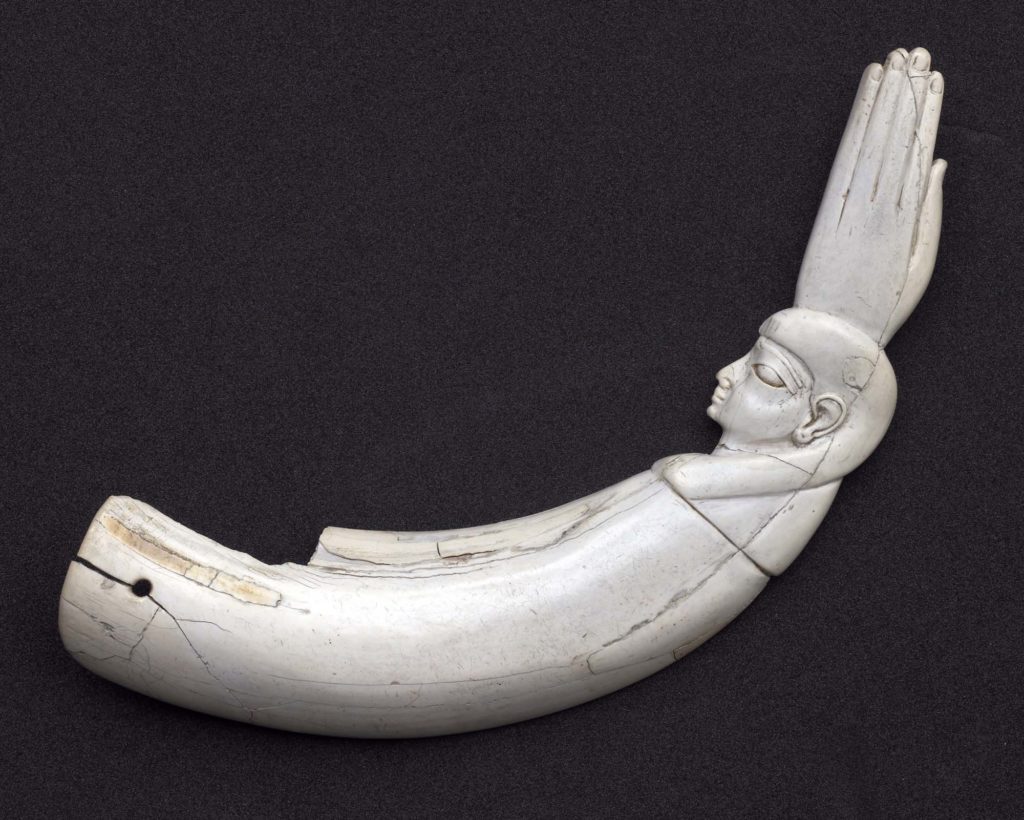 This hippopotamus ivory clapper dates to the New Kingdom (about 1550 – 1186 BC) and was excavated at Abydos by the University of Liverpool, 1909.

Carved in the shape of a hand and decorated with the head of Hathor, the goddess of love, music and joy, it was discovered in a tomb with a matching clapper which is now in the Egyptian Museum, Cairo.

Clappers were used in musical performances and also in rituals to protect a mother and baby in childbirth. 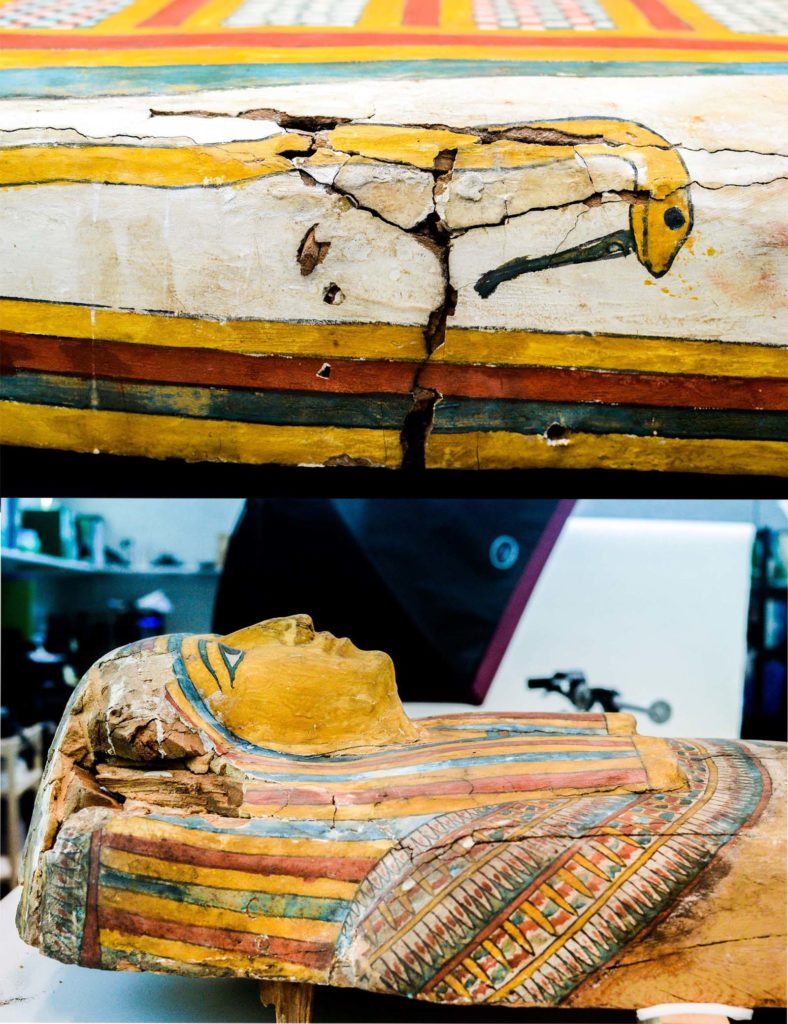 Another mummy and two coffins that have not been on display since the Blitz of 1941 in World War Two, the coffins of a lady called Taenty came from an undisturbed tomb found by John Garstang’s excavations at Kostamneh in 1906.

The cemetery is now flooded by Lake Nasser and the excavation was a rescue one following the construction of the first Aswan dam that opened in 1902 and created Lake Nasser which over time submerged archaeological sites.

It was donated to the museum by Theodore M Davis who sponsored Garstang’s excavations that year. He was a famous rich American businessman and archaeologist who excavated tombs in the Valley of the Kings.

The ring of Ahmenotop II 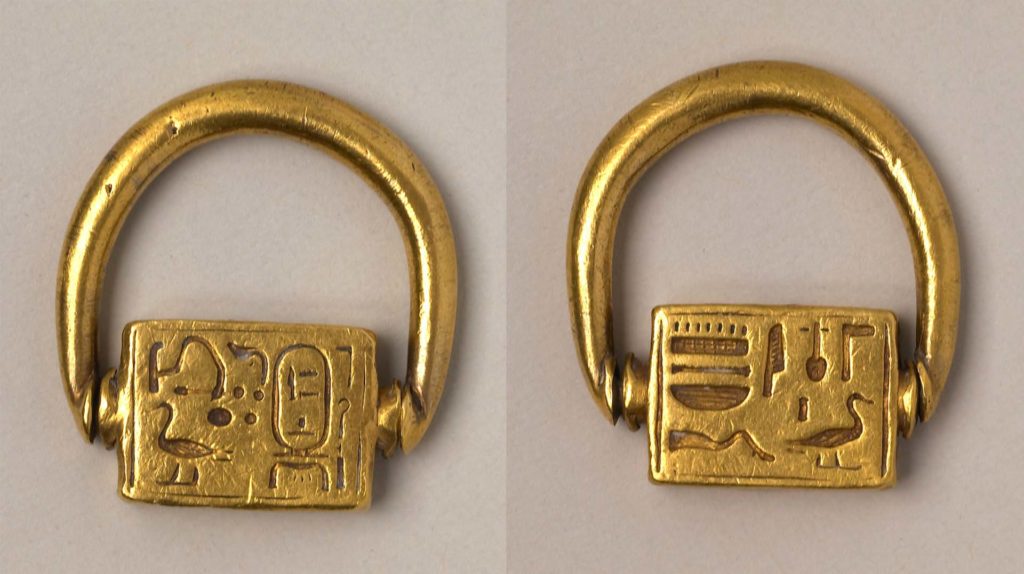 Pharaohs would award gold rings inscribed with their name to people in their service. This solid gold signet ring with swivelling bezel is inscribed with the name of Amenhotep II on one side and on the other is the epithet, “the perfect god, son of Amun, mighty lord”. Amenhotep II was a great warrior who continued his father’s military campaigns in the Levant and Nubia.

The coffin lid of Padiamun 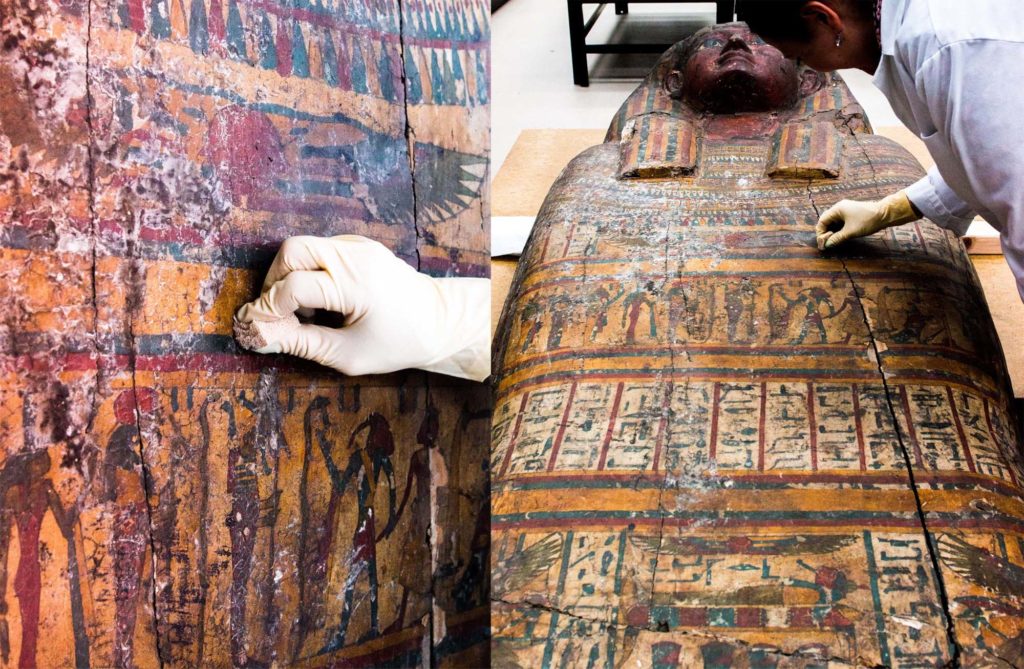 Padiamun – the name means ‘he whom Amun gave’. Padiamun held the title ‘Doorkeeper of the Temple of Amun’ at Karnak and was the son of Penhay and Nehemesbastet.

He was buried within three coffins, but one was destroyed in World War Two and the other two were very damaged. The museum’s conservation team has spent the past year conserving the two damaged coffins so they can be displayed with his mummy for the first time since 1941. The mummy was displayed alone in two exhibitions from 2005-2015. 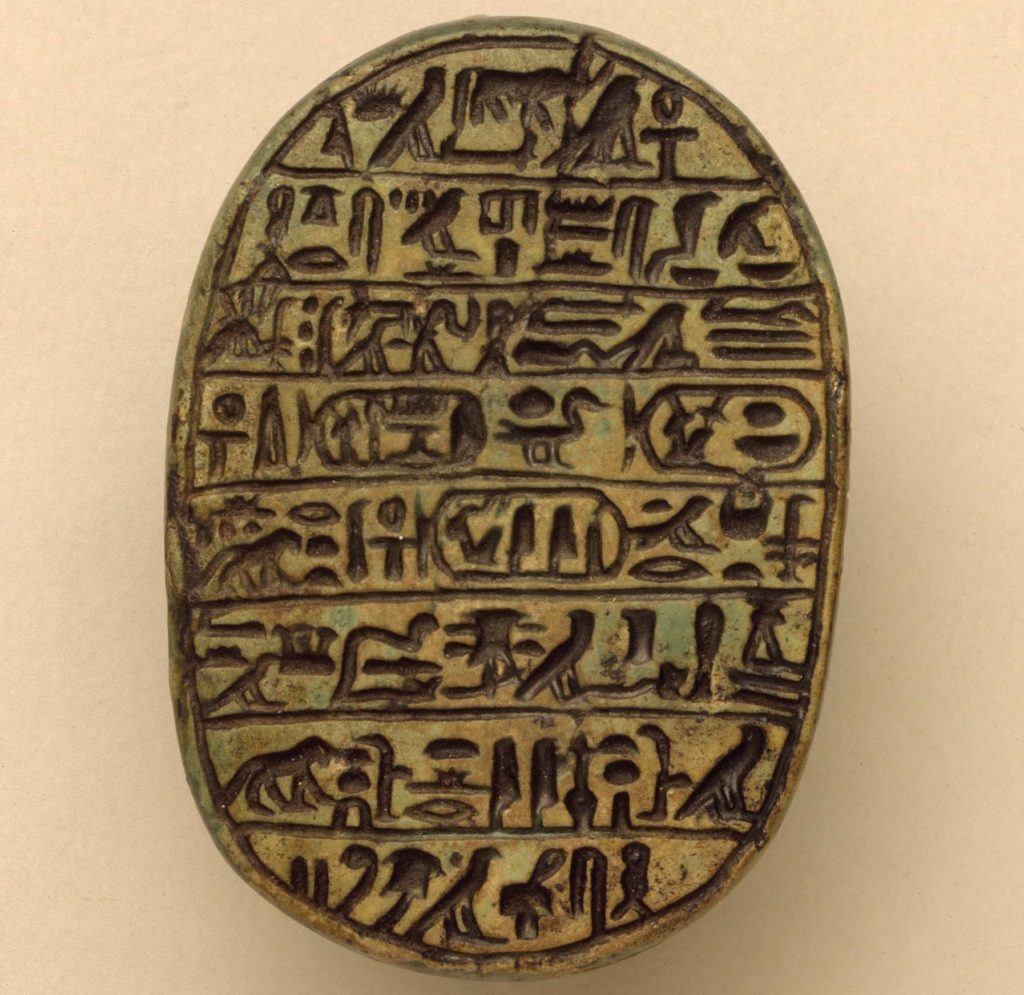 Scarab of Amenhotep III. New Kingdom (about 1380 BC) © Courtesy of National Museums Liverpool.

Hundreds of inscribed scarabs were sent by King Amenhotep III across his empire, as far away as Syria and Sudan. These early versions of postcards or tweets contained short messages celebrating his achievements. This one pays tribute to the king’s strength and bravery for killing 102 lions in the first ten years of his reign.

Liverpool World Museum’s gallery Ancient Egypt: A Journey Through Time is open now, admission is free. Please note there are charges to visit the museum’s Planetarium (although there is one free show a day). See www.liverpoolmuseums.org.uk/wml/visit/floor-plans/planetarium.aspx for more information.

Discover treasures from around the world, explore outer space and meet live creatures at the World Museum! World Museum is the largest and oldest of the National Museums Liverpool, founded in 1851 when the 13th Earl of Derby left his substantial natural history collection to the city.

One comment on “11 beautiful objects from the new Egyptology Gallery at World Museum, Liverpool”