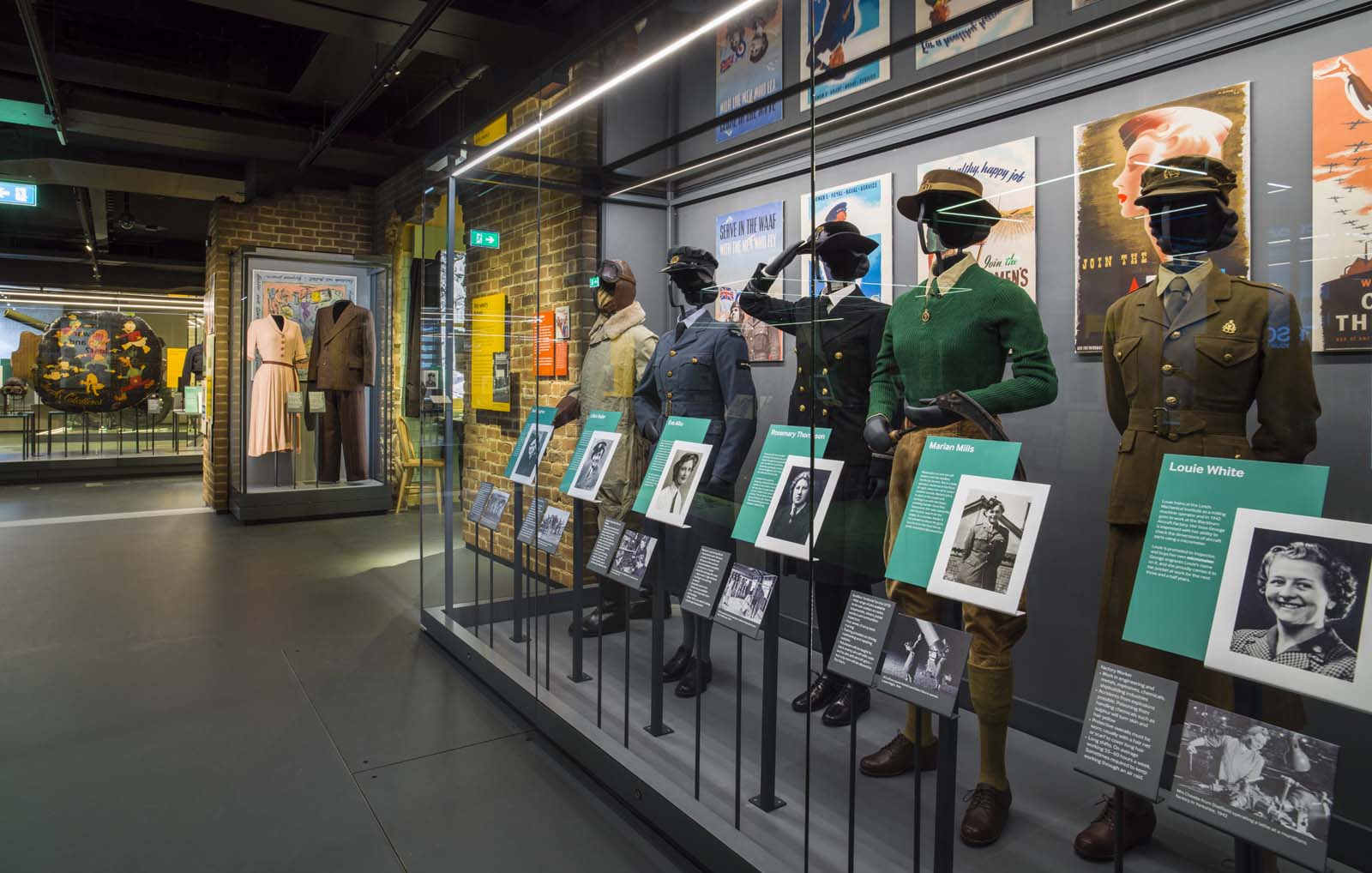 We want to make sure that through the whole space the events that people are familiar with are told through the eyes of the people who experienced them and who were there.

You will find the leaders throughout the gallery; we have Stalin, Roosevelt, Churchill but for us we wanted to tell some of those marginalised and hidden stories that aren’t always brought to the forefront.

A lot of stories can be found in the text but how often do you get to see the individuals that you might find personal connections with? I think by having the iconography of a portrait it immediately elevates that person’s story within the wider narrative of the galleries.

By having so many people’s stories in here it also gives visitors an opportunity to connect with people. It could be that as you’re reading, you think: ‘would I have reacted in the same way as this person?’ Or ‘how would I have dealt with this particular situation?’ 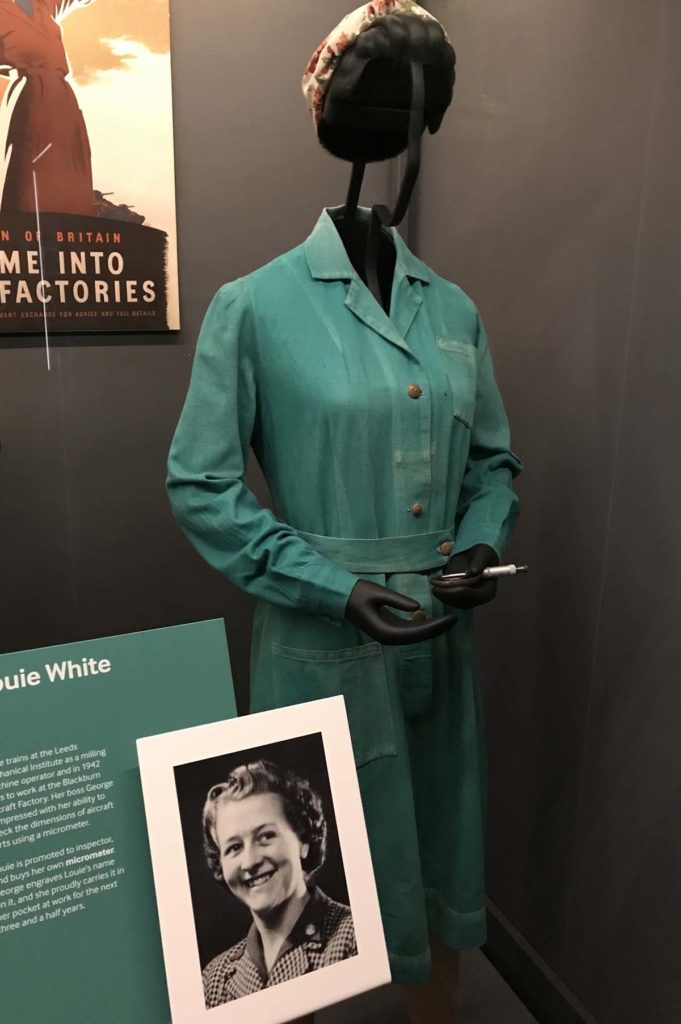 The story of Louie White and her micrometer. Photo Richard Moss

Louie White was a factory worker based in Leeds and in 1941, when the mobilisation of women in Britain came into effect, she decided to train in an aircraft factory.

We had in IWM’s collection lots of documents and papers about her experience and showing her training, but as I was reading through them she kept mentioning this one object, this tool – a micrometer.

She talked about the fact that as a woman she had gained more skills and she was feeling really proud of what she had been able to accomplish. So much so that this micrometer had been engraved for her by her boss with her name in recognition of her skill.

I really wanted to find out what happened to this object as I had a personal connection to her because the Blackburn aircraft factory where she worked is where the Fairey Swordfish aircraft was produced and that was what my granddad flew in. 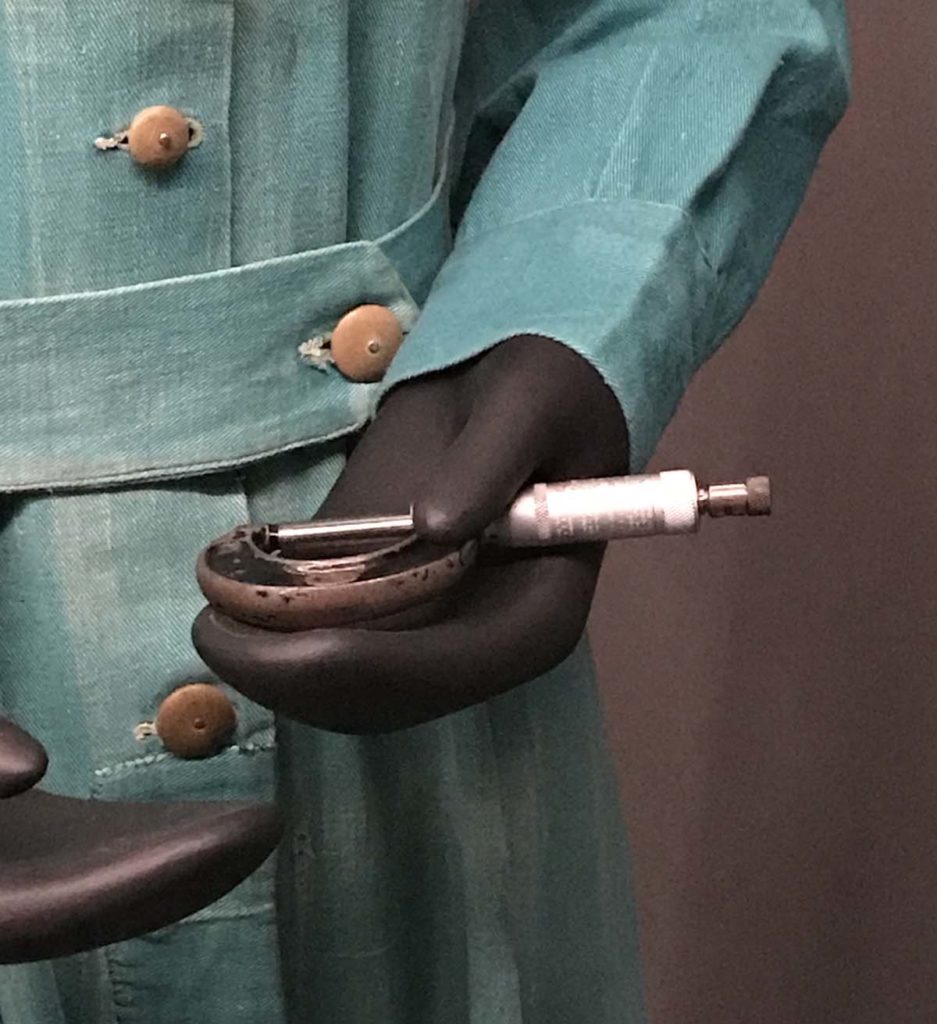 A micrometer is a tool used for accurate measurement of large objects. Photo Richard Moss

I got in touch with her son and he said: “Yes, the micrometer is in my shed in the garden.” He knew it was a really important object but he didn’t really know what to do with it. What do you do with something like that? A week later it turned up on my desk. And he said put it with the rest of the collection. I’d love it to all be together.

For the first time it is now all here at the IWM. We can tell Louie’s story, he provided us with an image of her, her micrometer is in her hand, and this is a similar outfit to what she might have worn. This woman who felt so much pride in the way that her life had changed and who had excelled in her work to become promoted to an inspector and had her object engraved with her name and kept it. For me it’s special to now share that with our visitors. 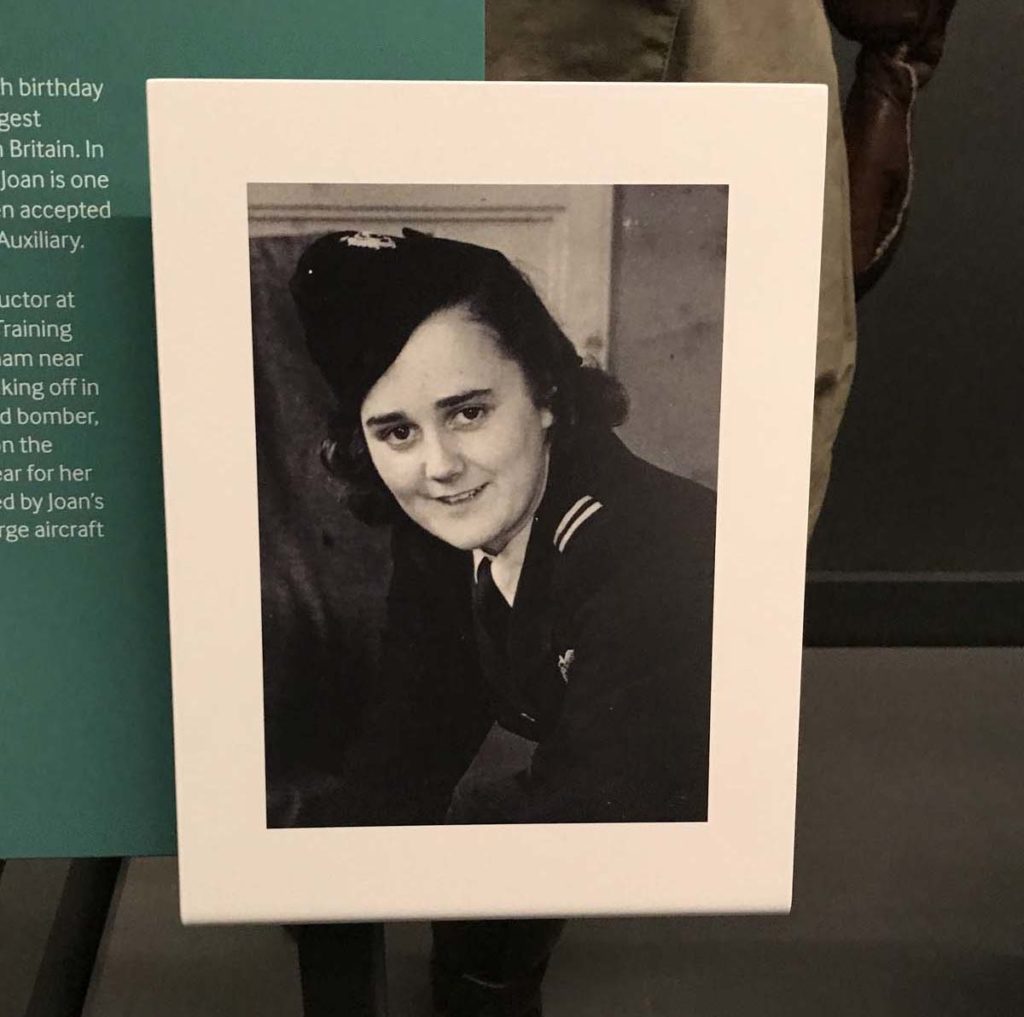 Joan Hughes was a member of the ATA – the Air Transport Auxiliary – and her job was to fly aircraft maybe from the repair yards back to the RAF who were going to be flying it operationally. Sometimes she would be flying aircraft that had absolutely no navigational equipment in them.

Joan was only five feet two and there’s an incredible photograph of her where she doesn’t even reach the height of the wheel of the aircraft she is going to be flying. There’s an anecdotal story where she was taking off in a four engine Sterling Bomber and one of the tyres punctured on the runway. Being of such a small stature the onlookers on the runway were terrified and thought she’s never going to be able to keep this huge aircraft under control – but of course she did.

There are so many stories of women throughout these galleries that remind you why their contribution was so important. 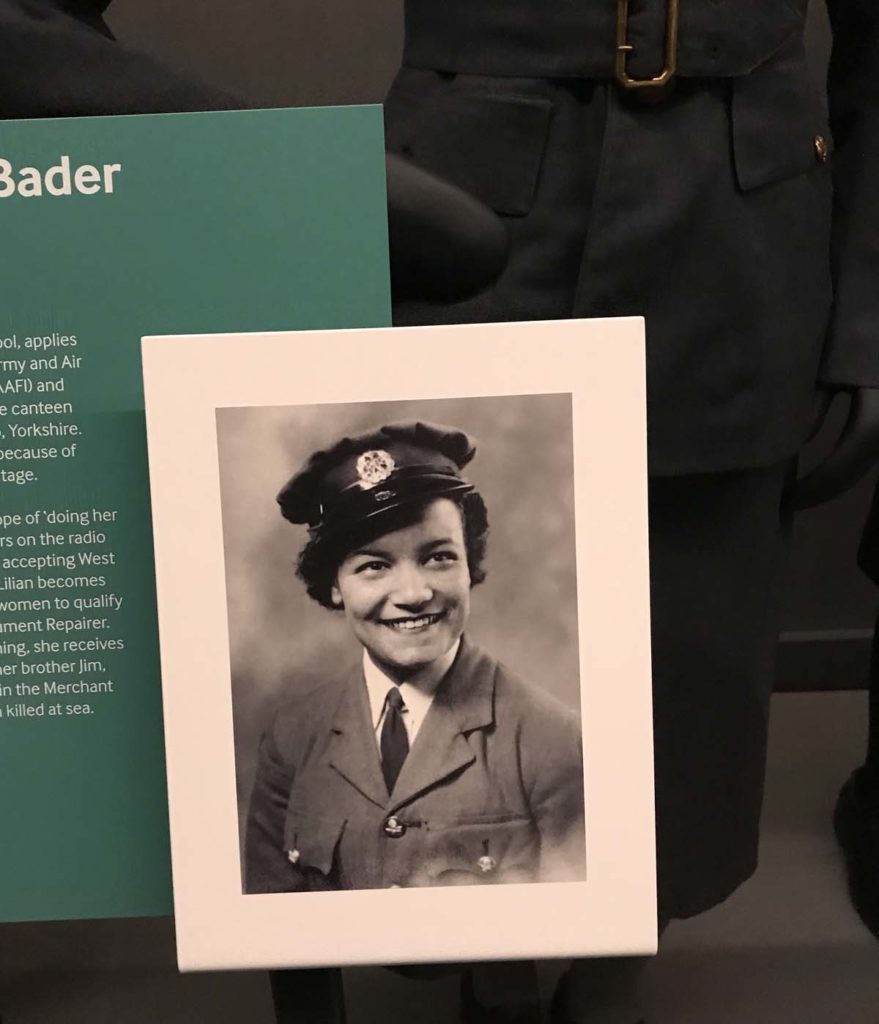 Lilian Bader was desperate to join one of the forces and she originally applied to join the NAAFI (The Navy, Army and Air Force Institute). She worked there very briefly but because her father had Jamaican heritage, she was actually told she could no longer serve with them.

It wasn’t until the RAF lifted the colour bar, allowing Black recruits to join, that she was able to join the RAF and she became the first woman to qualify as an RAF instrument repairer. She had great resilience; she was told no many times, but she kept coming back because she knew she wanted to serve her country.

There are always more that can be done to tell these stories and we’re always looking to increase and diversify the stories that we do have. People want to see themselves represented in the spaces and we’re trying our very best to do this.

We also have an audio visual exhibition about the contribution of the countries from the British Empire, which gives visitors the agency to select the country that they are interested in, to see posters and films and archive footage related to that country and understand how their history and their heritage was changed because of the second world war.

The Empire AV (audio visual) does go some way to doing this and we’re quite bold in saying that there were also elements of coercion and exploitation and those are just as important to be able to tell. 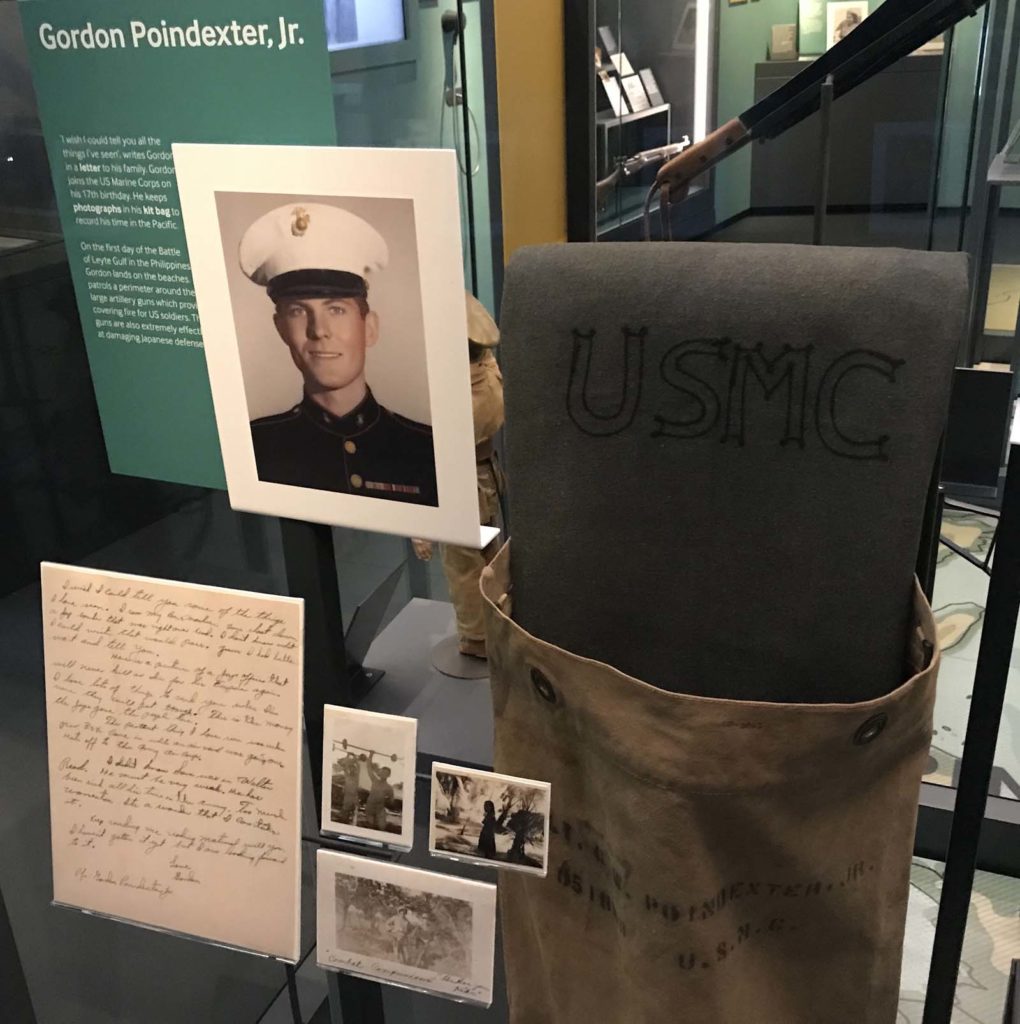 Gordon Poindexter is my friend’s father who I had the privilege of speaking to at the beginning of the project but unfortunately he passed away just two years ago. We have a colour photograph of him here and I asked his family how it came about.

He joined the US marine Corps at 17-years-old and the rest of his cohort all got large tattoos to celebrate and they said “no you’re too young – your parents would kill us, so instead we’ll get you a nice colour portrait to send home.”

Eventually I think he did get some tattoos to represent his experience, but we now have his kit bag with his name on it, his blanket and a letter home together with the kind of snapshots you can imagine taking if you were going to a completely new place and experiencing it for the first time.

As a Marine he had a dangerous job, but talking to him he couldn’t at first understand why we would want to talk about him in the galleries. He said: “I’m not very important. I was one of so many. Why my story?” He was in Leyte Gulf in the Philippines and for us it’s important to tell his story because someone might read this and see some parallels and get an insight into a life of one individual. It will be special when his daughter comes round and sees these objects displayed. 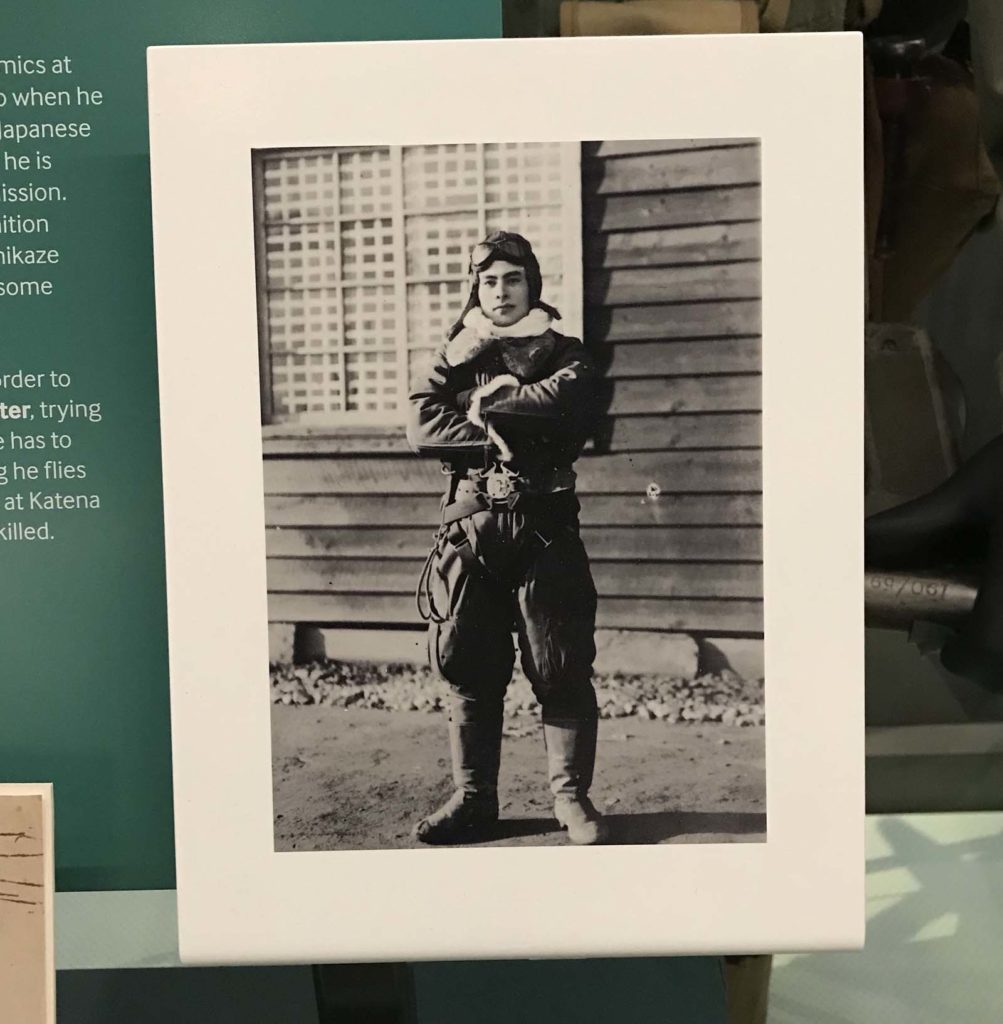 Roji Uehara was a 22-year-old kamikaze pilot and we have the last letter he wrote to his parents, which reveals how difficult it felt to be part of a cog in a machine and how he didn’t have control of his life.

He writes: “A pilot of the Special Assault Unit is merely a machine. He just steers the apparatus. He is only a molecule within a magnet that sticks fast to an enemy aircraft carrier, possessing neither personality nor emotions.”

Roji Uehara died on 11 May 1945 when he flew his plane into the US carrier fleet near Okinawa.

He knew he had a duty, but he really struggled with that. This personal story took about three years for us to get – by that I mean building some trust with people in other countries, explaining why you want to share these stories, and sensitively doing so. I think the galleries are better for having these kinds of stories in here. 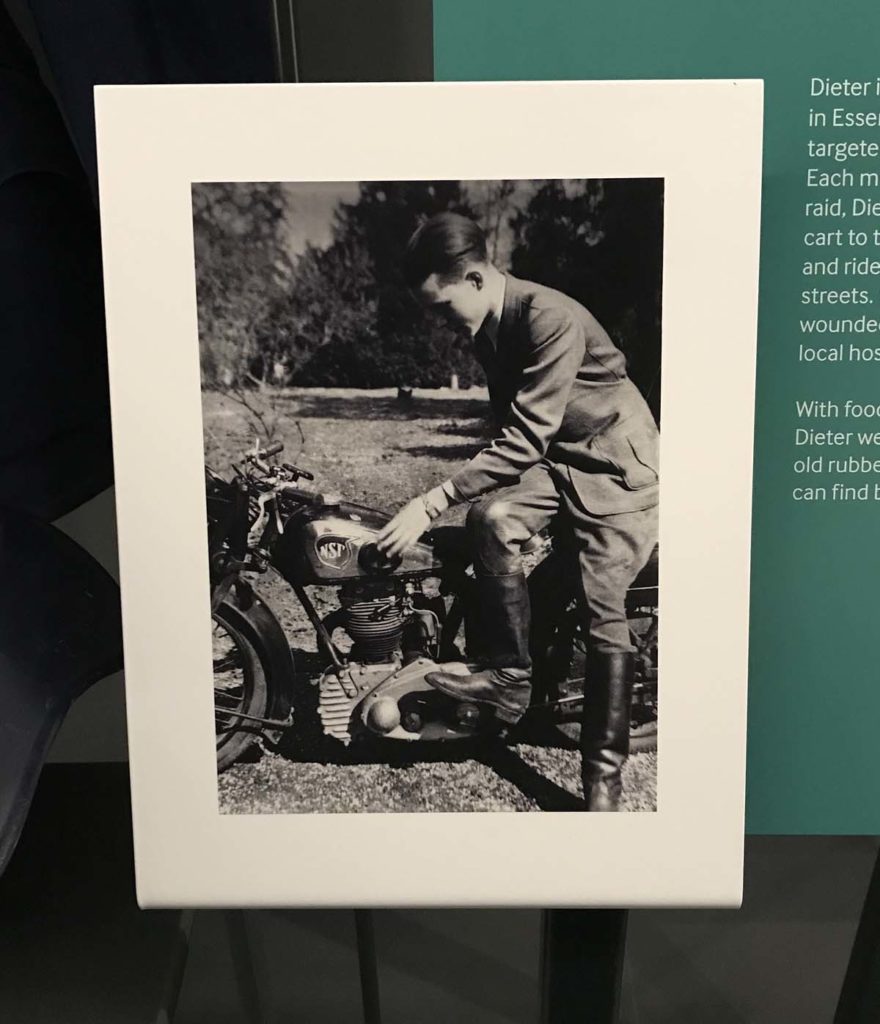 Dieter was a sixteen year old from Essen, and his story is quite a difficult one. I now know his daughter and she told me that this photograph was quite a famous one in his family. He has a motorbike; he was really into motorbikes as a younger man and when he was older people would often give him a birthday card with a motorbike on it.

He didn’t tell his family for a very long that that it was actually a very painful memory for him because his job during the war in Essen, which was very heavily bombed, was to hook a cart onto the back of his motorbike and go round the round town picking up the wounded and the dead and take them to the hospital.

What an unbelievably horrendous job to be doing as a sixteen-year-old, but it wasn’t something he felt he could share with his family.

I think it’s important that people can understand that it doesn’t matter what side you’re on or what country you came from, you are still a human trying to survive, you are still making decisions, you still lost loved ones, you still went through pain and heartache or moments of joy and resilience.

IWM London tells the stories of those whose lives have been shaped by war through the depth, breadth and impact of our Galleries, displays and events. Explore the First World War Galleries and iconic Atrium; find out what life was like at home during the Second World War in A…