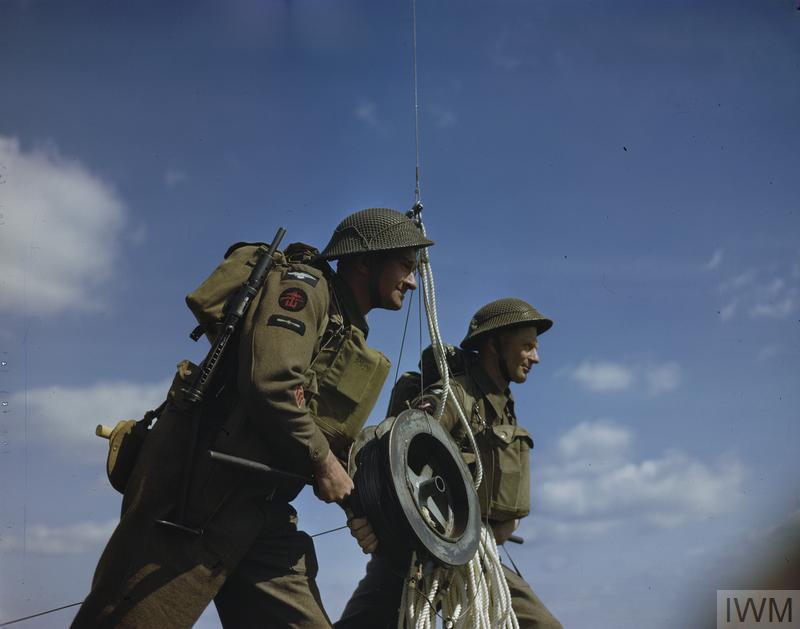 Most of the British images we know from the Normandy campaign of June 1944 were taken on black and white film stock, which allows us to only see the past in black and white.

But in the photographic archive of the Imperial War Museum are these treasures of early colour war and combat photography taken in the run up to and during the Normandy campaign.

For the most part they were not taken by press men but rather by members of the War Office and RAF and Army Film and Photographic Units. 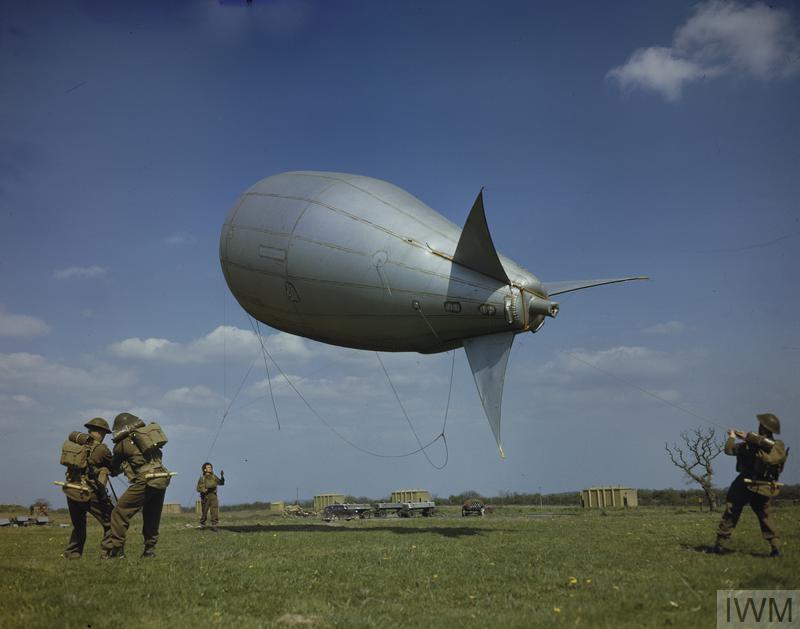 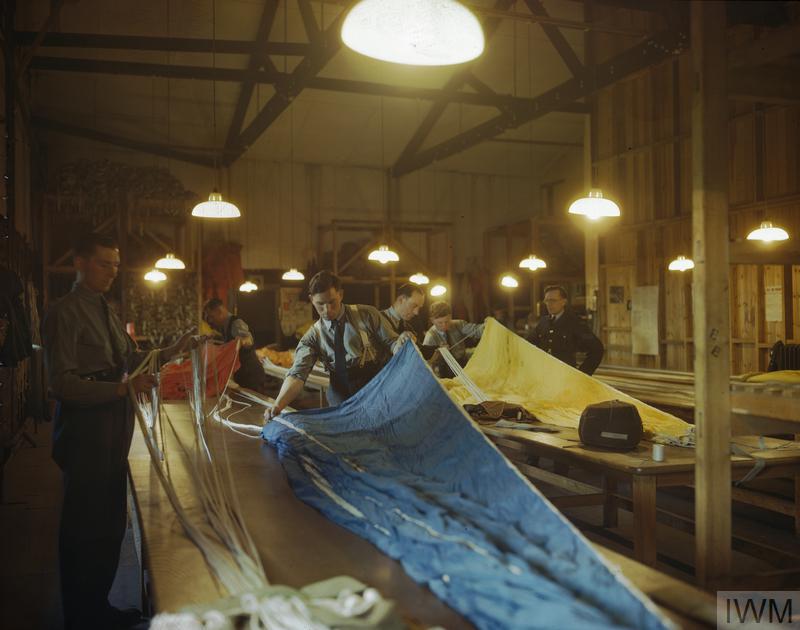 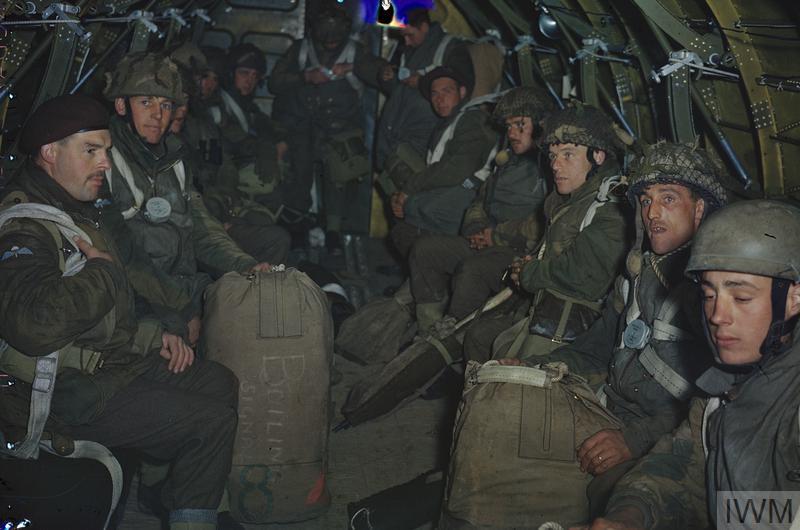 April 22 1944, British paratroopers sitting in the fuselage of an aircraft while awaiting their order to jump. © IWM (TR 1662)

This was a time when colour film was still a novelty and the first batches, which were supplied by Kodak, were hard to find. But the few vivid colour photos that were taken by British photographers throughout WWII offer a stunning visual insight into the lives of the people who experienced the war.

Commissioned as a Captain, Malindine went on to serve with No 5 Section, Army Film and Photographic Unit and was present in Normandy where, as Officer Commanding, Stills, he was tasked with covering the landings and operations in North West Europe. 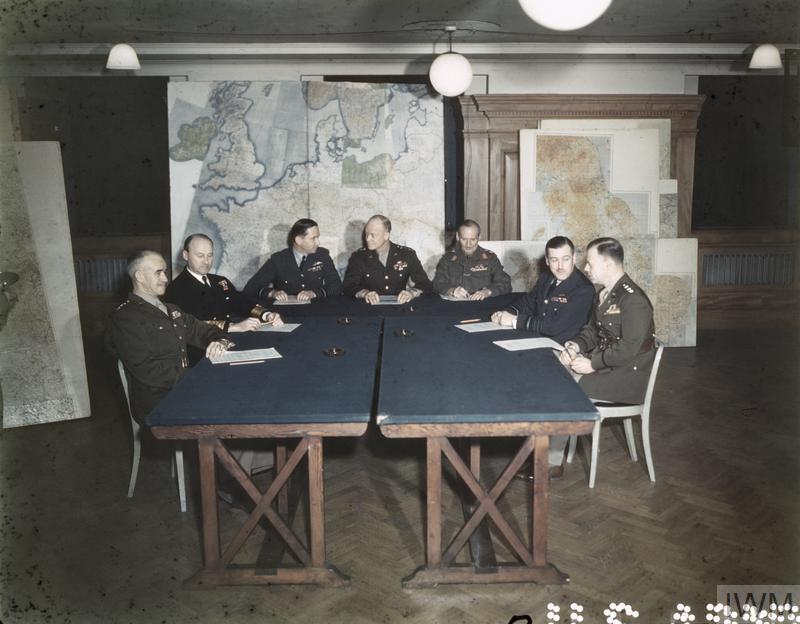 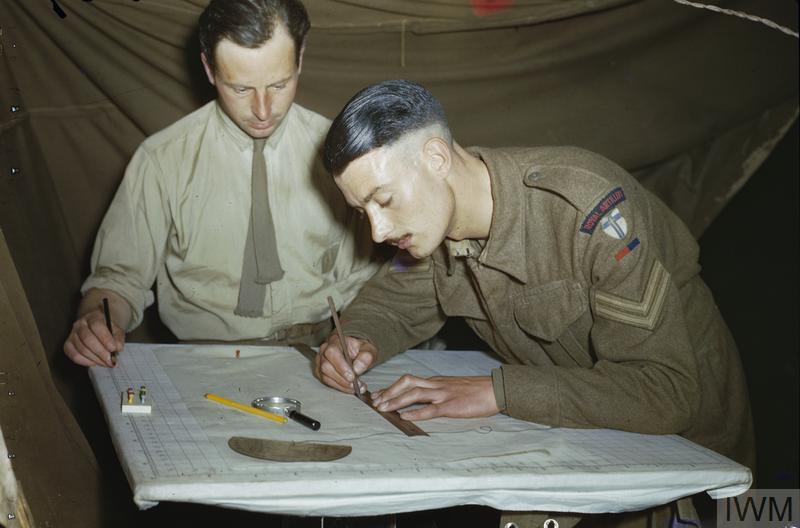 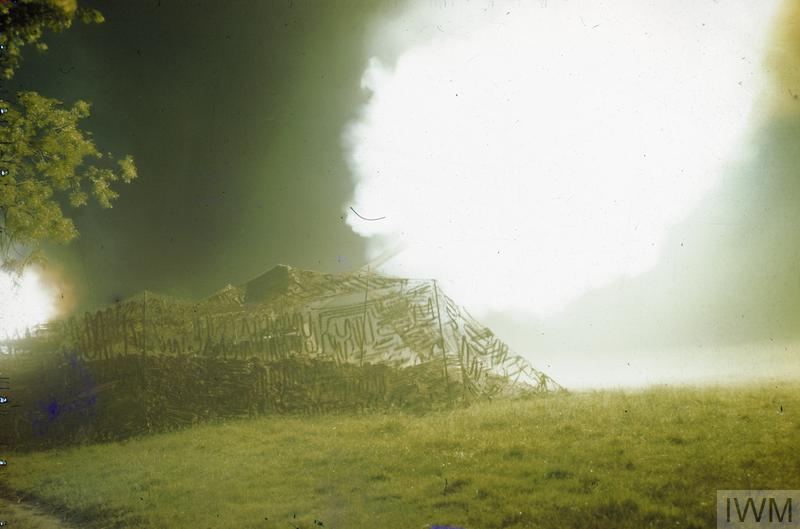 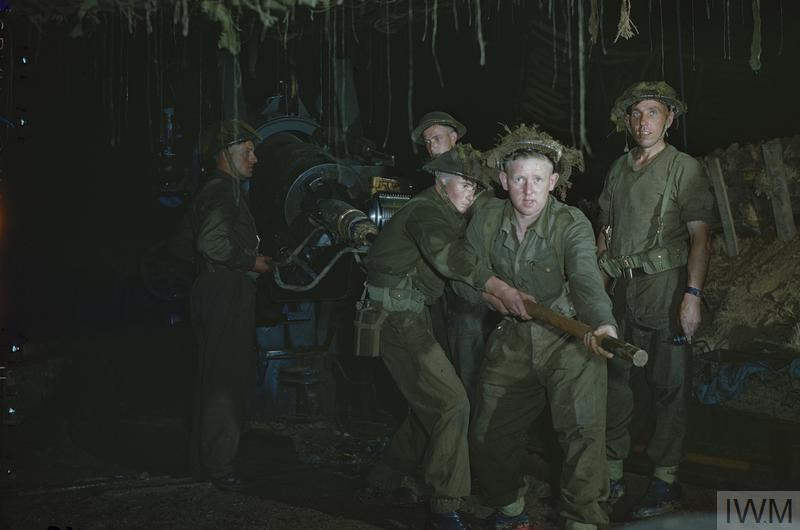 Captain Malindine photographed numerous key events of the war, including D-Day, the liberation of Paris, the campaigns in Belgium and Holland and was present inside Field Marshall Montgomery’s tent on Lüneburg Heath for the German surrender. He was also present at the Potsdam conference.

But his photographs of the liberation of Belsen concentration camp, perhaps mercifully taken in black and white, are some of the most hauntingly recognisable images to come out of the conflict. It is said Malandine played a key role in ensuring these photographs were published uncensored.

No.5 AFPU was originally formed during 1943 under the command of Major Hugh Stewart with an initial intake comprised of 36 regular soldiers from a variety of units. Training took place at Pinewood Film Studios in Buckinghamshire. Pinewood was busy during the war, also functioning as a base for the RAF Film Unit and the Crown Film Unit who produced the propaganda films for the Ministry of Information.

The training comprised of lectures on all aspects of both stills and cine camera work, together with one hour of drill each day. A programme of toughening up as guests of the Scots Guards at Chelsea Barracks finished off the training regime. 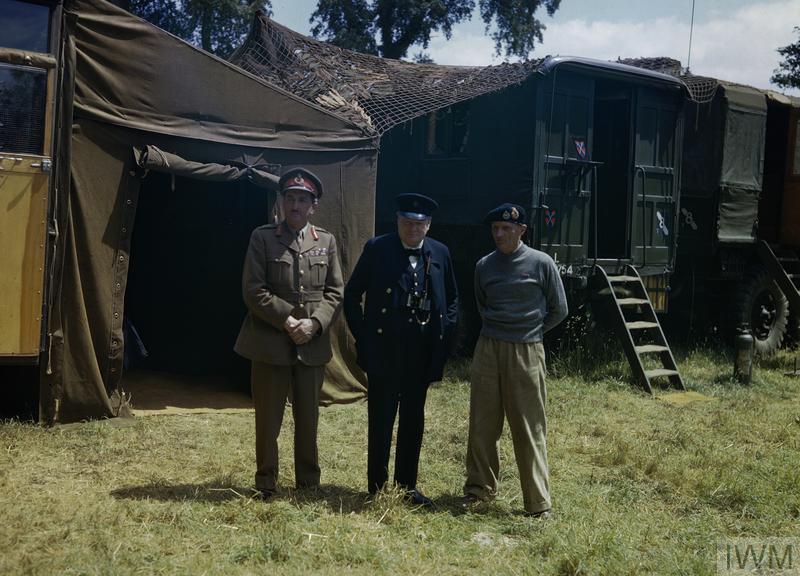 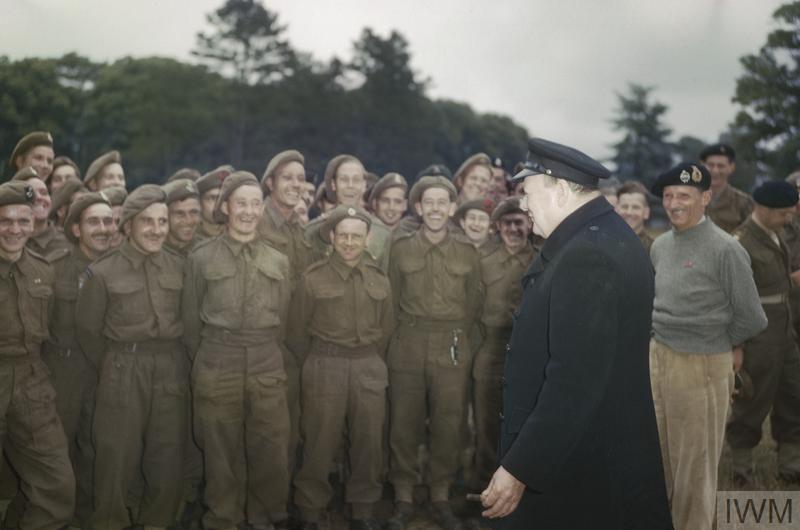 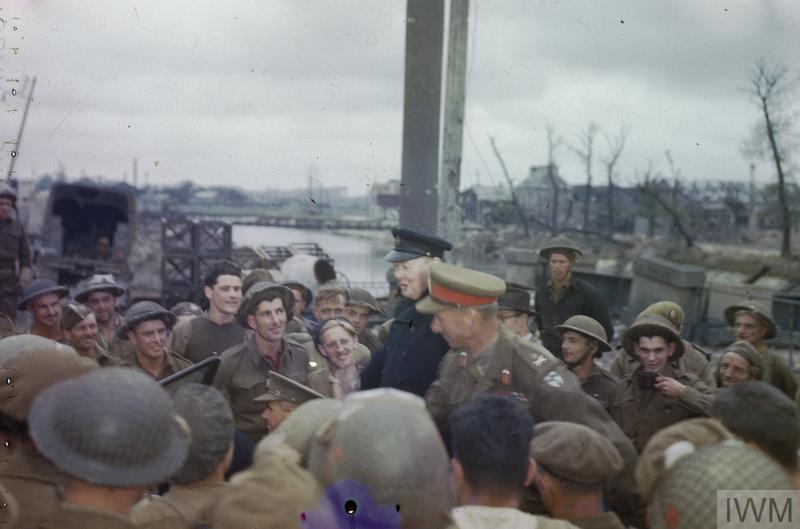 The Prime Minister, Winston Churchill, standing in a staff car and talking to British and Canadian troops at the ‘Winston’ bridge over the River Orne, 22 July 1944. With the Prime Minister is the commander of British Second Army, Lieutenant General Sir Miles Dempsey. Malindine E G (Capt), No 5 Army Film and Photographic Unit. © IWM (TR 2049) 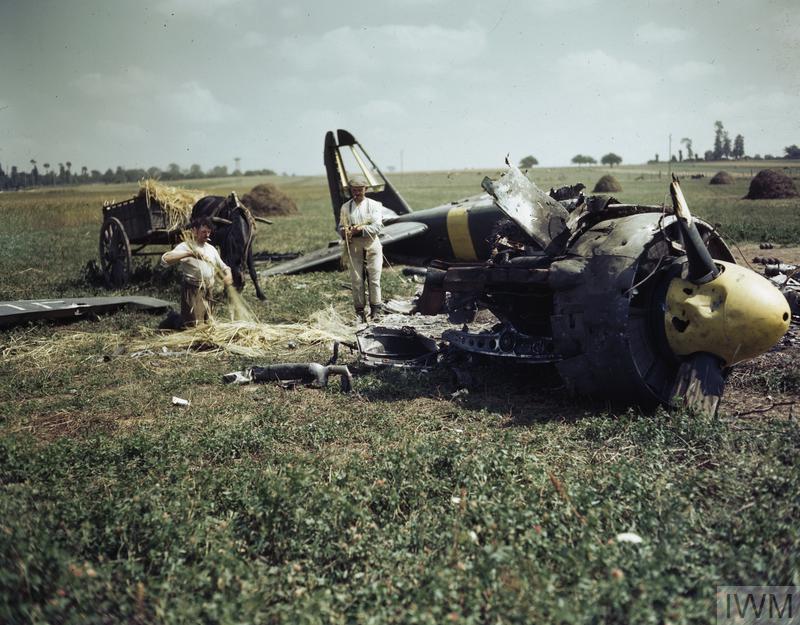 The wreckage of a Ju-88 purported to have been shot down by the Canadian Spitfires of Johnny Johnson’s Wing lies not far from airstrip B-7 at Matragny, Normandy. The two French farmers are plaiting straw to bind clover bundles. © IWM (TR 2107)

Malindine’s experiments with the fledgling colour photography in Normandy allowed him to vividly capture the visits of Winston Churchill to Normandy on June 12 and later in July, but also scenes away from the business of war – like the Bastille Day ceremony at Courseulles War Memorial.

He also made a tender series of photos of Abbe Saint Jean baptising newly born babies in the thirteenth century chapel of Benouville Maternity Home. At the time of the ceremony the home was in the front line and the chapel windows were rattling as a result of the nearby artillery duel between German and Allied forces.

Interestingly Captain Malindine’s brother, William, also served with him in the AFPU in Normandy and Northwest Europe. Also a professional press photographer with the Daily Express, L/Sgt Malindine served as a darkroom developer and processor with No 1 AFPU in North Africa before taking a role as one of the senior NCOs running the AFPU mobile darkrooms in Normandy. 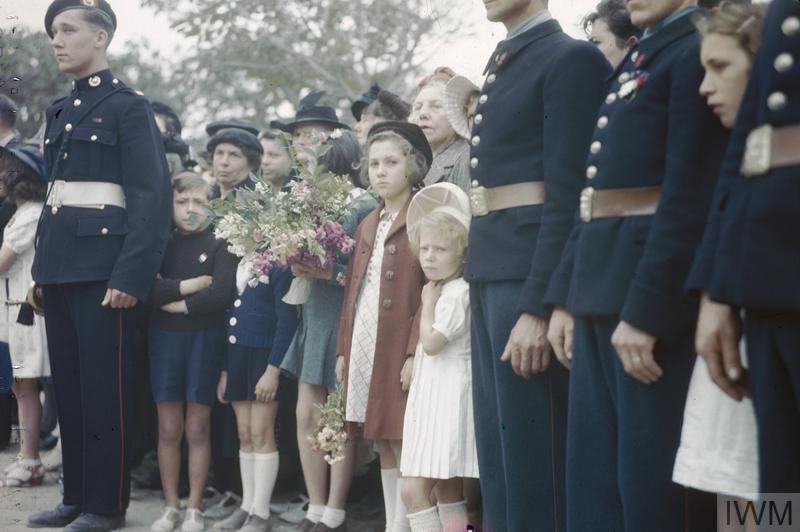 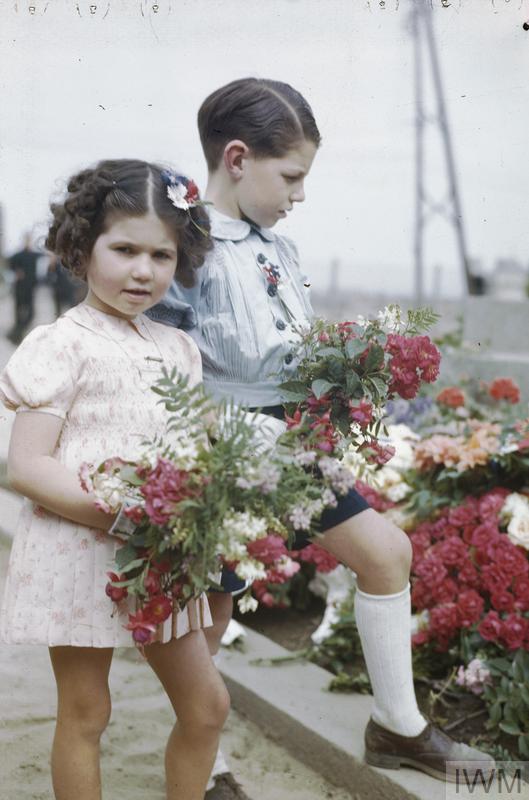 Two children, a brother and sister, laying flowers on the War Memorial during the ceremony to celebrate Bastille Day. Courseulles was the first town to be liberated by the Allies. Copyright: Photo Malindine E G (Capt), No 5 Army Film and Photographic Unit. © IWM (TR 2004) 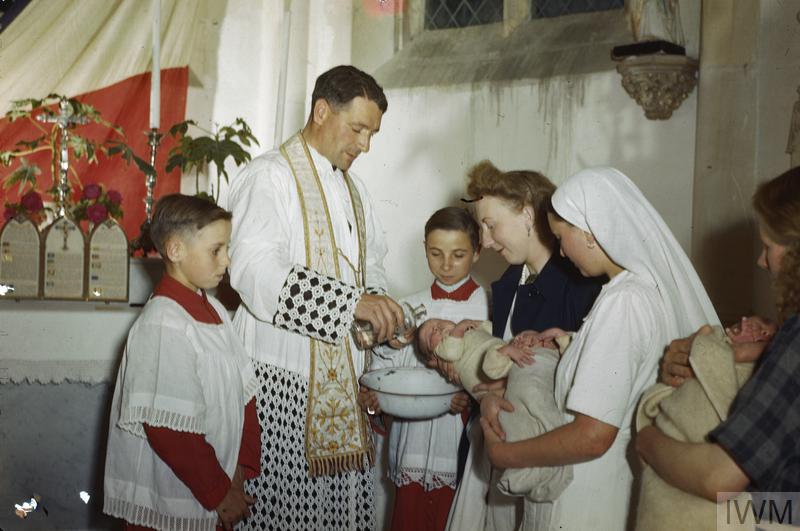 The Cure of Blainville (Calvados), Abbe Saint Jean baptising a newly born baby in the thirteenth century chapel of Benouville Maternity Home. The baby is held by another mother because its own was still unable to leave her bed. Photo Malindine E G (Capt), No 5 Army Film and Photographic Unit. © IWM (TR 2154)

The Malindines are the only brothers known to have served together in the Army Film and Photographic Unit during the Second World War.

One of the most experienced photographers to serve with the AFPU, Captain Malindine returned to his job at the Herald after the war. 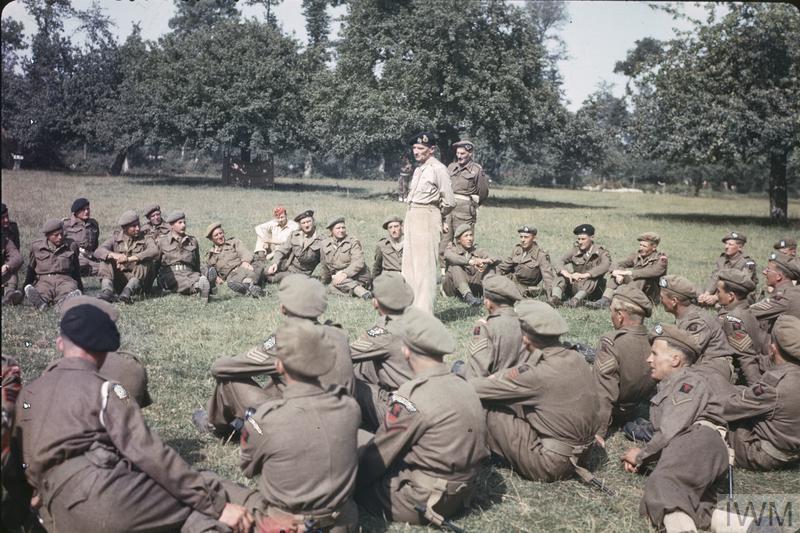 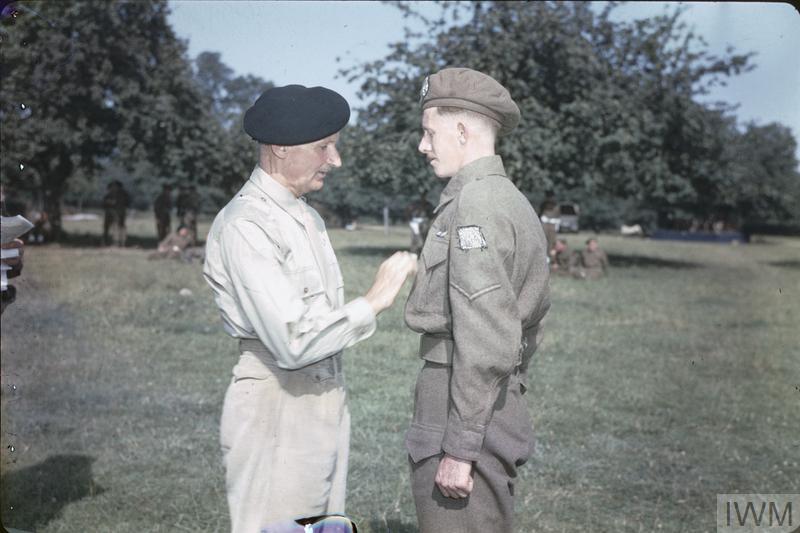 17 July 1944 (TR 2011) Lance Corporal R W Bennett, from Leicester, of the Royal Signals receives a Bar to the Military Medal, which he was awarded at Tripoli, for gallantry during the Normandy landings. © IWM (TR 2011) 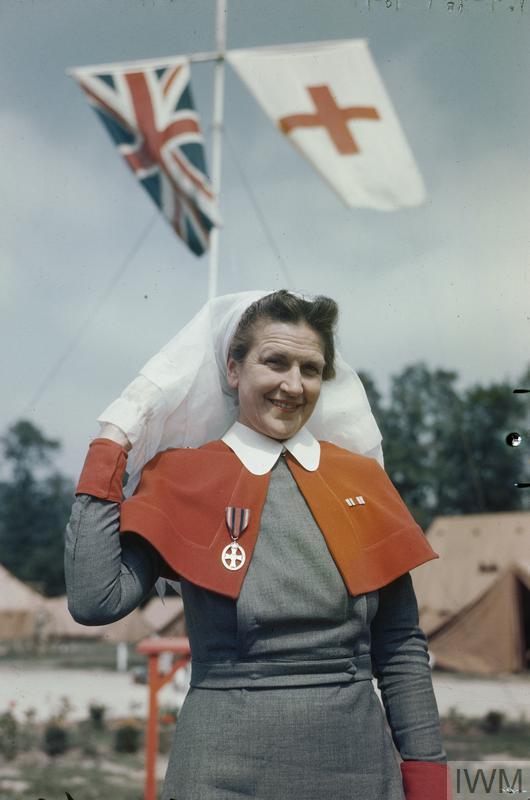