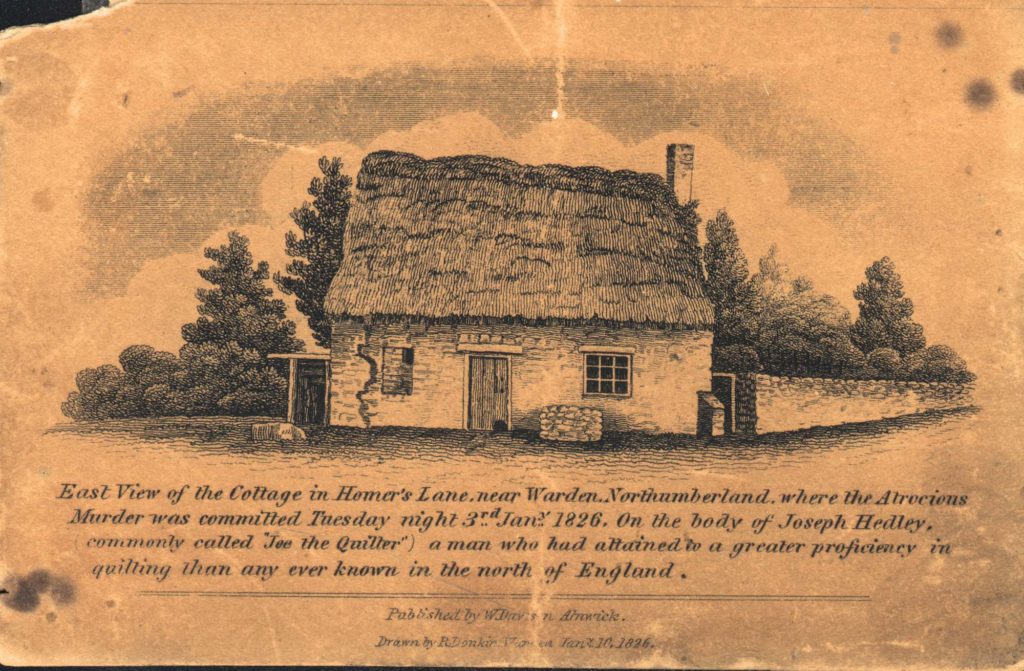 It was a cold, snow covered evening on January 3 1826, when 76 year old Joseph Hedley – known locally as Joe the Quilter – was brutally murdered in his cottage in the parish of Warden in Northumberland.

The elderly quilter, who had spent his years plying his needlework skills across the country, was a locally famous and popular figure whose quilts were renowned as far as Scotland and America. But on that cold January night in 1826 he met a violent end.

The cottage on Homer’s Lane, leading between Warden and Walwick Grange, was in an isolated spot, but two people, a labourer called William Herdman and Mrs Biggs, a pedlar had called in on Joe in the early winter evening and found him fit and well with a fire roaring in the fireplace.

He had also that day purchased a pitcher of milk, a pound of sugar, a sheep’s head and some offal from the farmer’s wife Mrs Colbeck of nearby Warwick Grange. But when a Mr Smith of Haughton Castle rode past the cottage at 8pm on his way home from Warden, all was silent and dark. 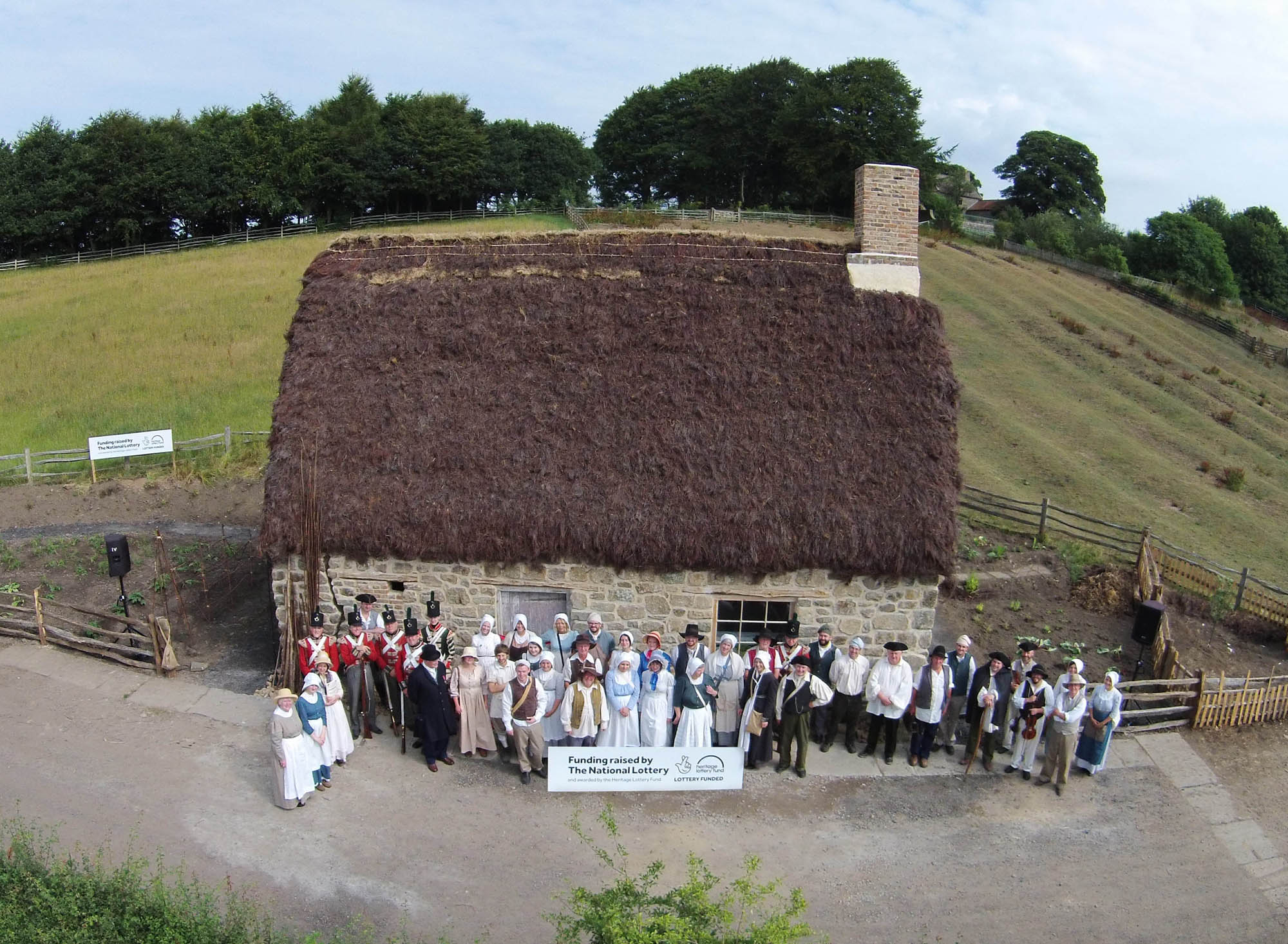 A number of days passed and concern for old Joe grew among his neighbours who then noticed blood marks in the snow around the cottage and signs of a struggle. Trying the door they found it locked, so they forced it. Inside they found the cottage ransacked and the quilter lying in an anteroom with his throat cut and his face horribly slashed.

The murder shocked local people and was reported nationwide, yet despite a major police enquiry and a £100 reward posted by none other than Sir Robert Peel, it remained unsolved.

The sad episode has however given staff at Beamish Open Air Museum unprecedented information about Joe’s life and the contents of the poor weaver’s heather-thatched cottage.

Now thanks to some archaeological detective work and some HLF funding they have rebuilt it and opened it to the public in the museum’s 1820s Landscape, using stones from Joe’s original home, including flagstones where they stood 200 years ago.

Remains of the original cottage in Warden, which was demolished in 1872, were uncovered by Beamish staff and community members during an archaeological dig, which also uncovered old buttons, a coin, hundreds of pottery sherds and a name with Reverend R Clarke inscribed on it. Records reveal how the Rev. Clarke battled through a snowstorm in 1823 to save Joe from starvation.

The dig also revealed details about the interior layout and dimensions of the cottage, enabling Beamish staff to faithfully recreate the cottage on site.

A drawing on a postcard produced after Joe’s murder gave further valuable details about how his home looked. A crack in the front wall of the original cottage, clearly visible in the 1820s drawing, has been reproduced whilst the interior has been accurately  furnished thanks to an auction of the weaver’s possessions that detailed the cottage’s contents. 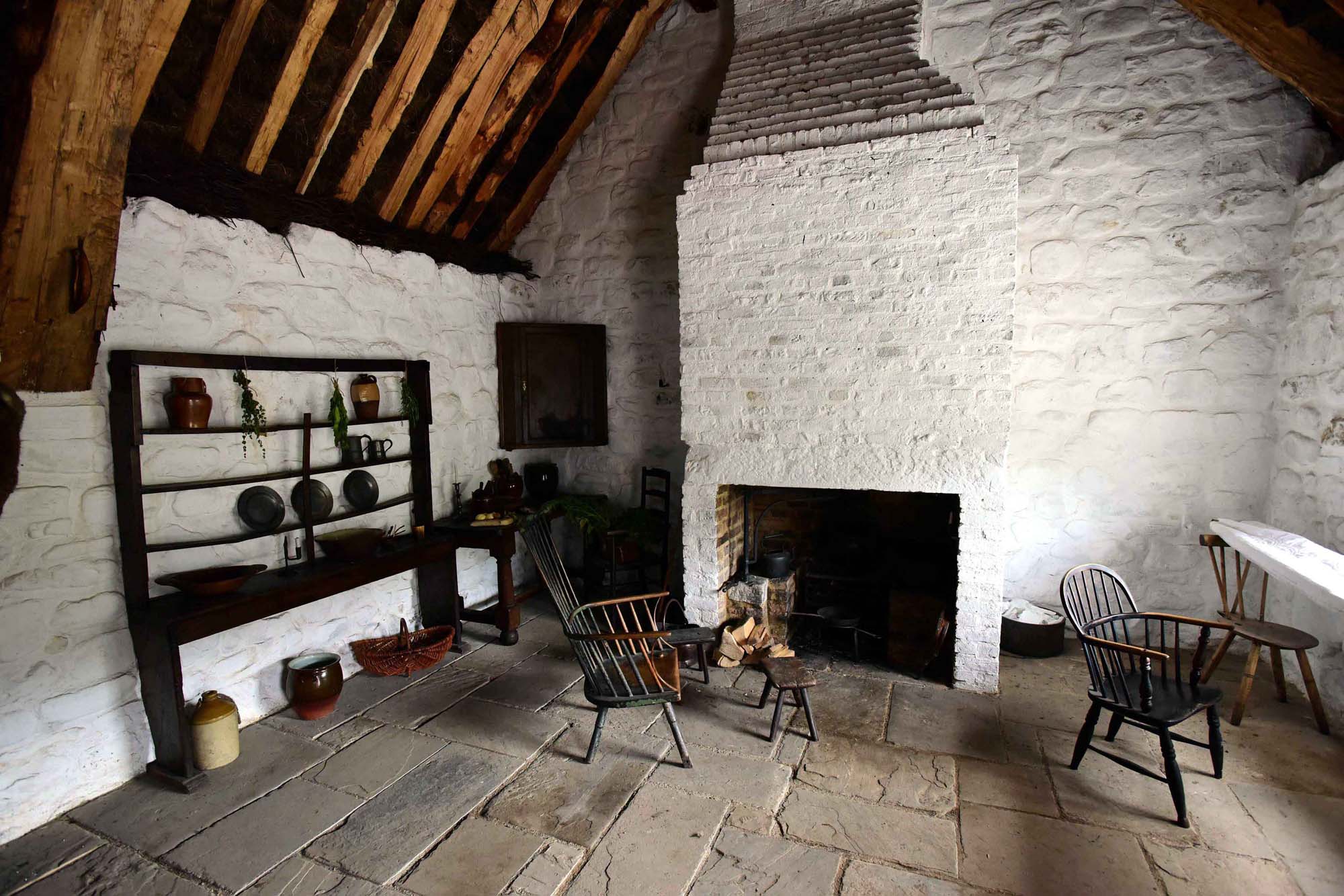 The cottage is a recreation of the ‘lost’ home of renowned Georgian quilter Joseph Hedley, who was murdered in 1826. Courtesy Beamish Museum

As well the sad story of Joe the Quilter, the new exhibit tells the story of quilting and the growth of cottage industries in the early 1800s as part of the HLF-backed Remaking Beamish project, which is the biggest development in the museum’s 48-year history. The project also includes a 1950s town, 1950s farm and a Georgian coaching inn, where visitors can stay overnight.

Beamish also has over 400 quilts in its collection, including an example made by Joseph Hedley, whose life saw the expansion of industry and the proliferation of cottage industries such as his own home spun textile ‘business’.

Richard Evans, Beamish’s Director said the “beautifully-crafted, heather-thatched cottage gives us a rare chance to understand what everyday life was like in the North East during the early part of the 19th century”.

“The quality of this latest addition to Beamish is outstanding – the result of many years of research, painstaking craftsmanship and the involvement of local community groups and schools. It is a real credit to the dedication and talent of our staff and volunteers, who have created this fascinating new experience for our visitors.”

Joe’s cottage has been built using traditional techniques and skills, using local materials. Around 1,400 bales of heather were sourced sustainably from near Rothbury, Northumberland, and a master thatcher taught his craft to museum staff and volunteers.

Stone’s that were cut over 200 years ago, and 23 tonnes of oak for the roof frame also came from Northumberland, near where the cottage once stood. One of Beamish’s blacksmiths made objects using traditional methods, including door locks, hinges and candlesticks and the door and windows were also made by the museum team. Volunteers created a replica of Joe’s quilt from Beamish’s collection, which took more than 700 hours to complete. 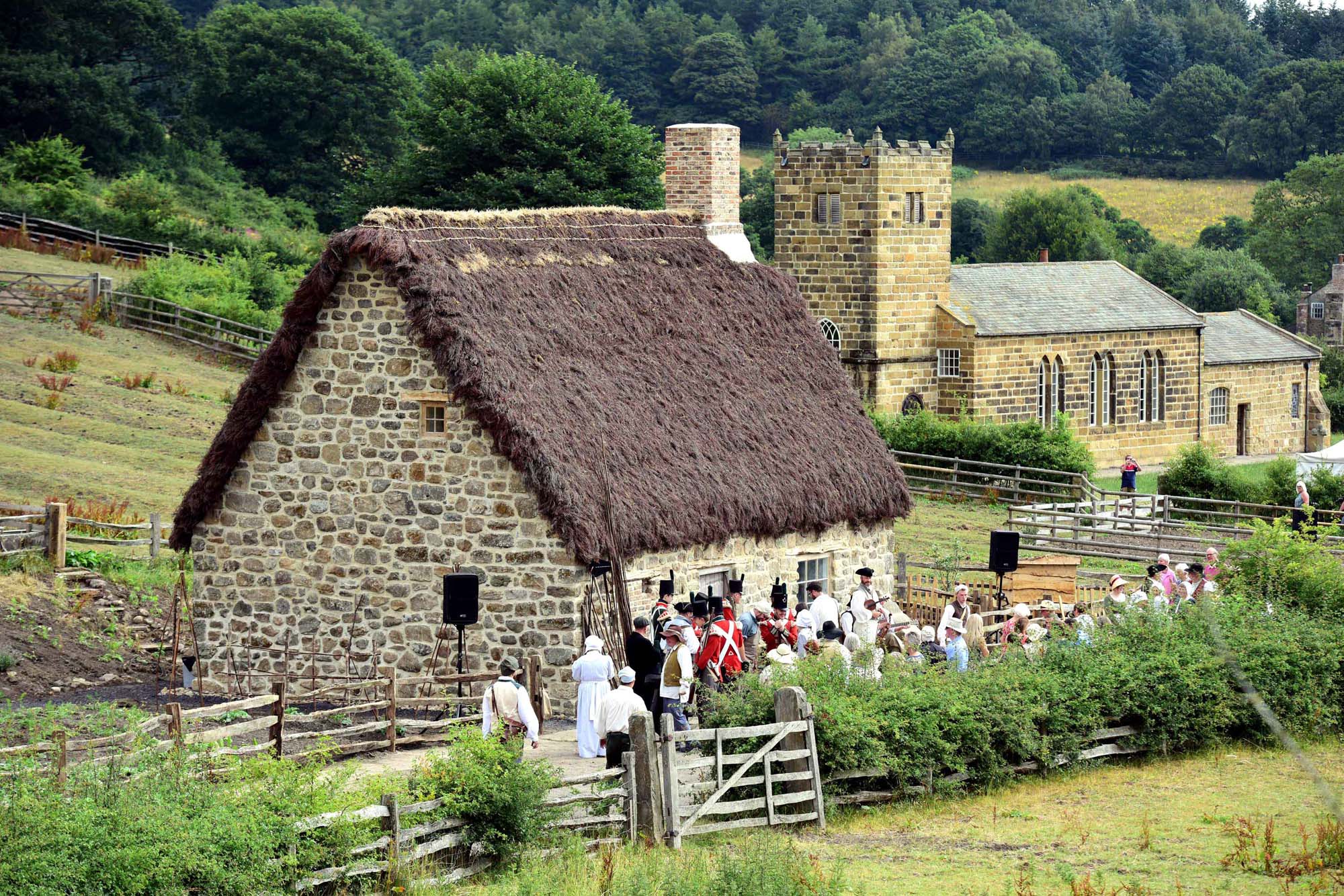 Celebrations at the opening of Joe the Quilter’s cottage at Beamish Museum. 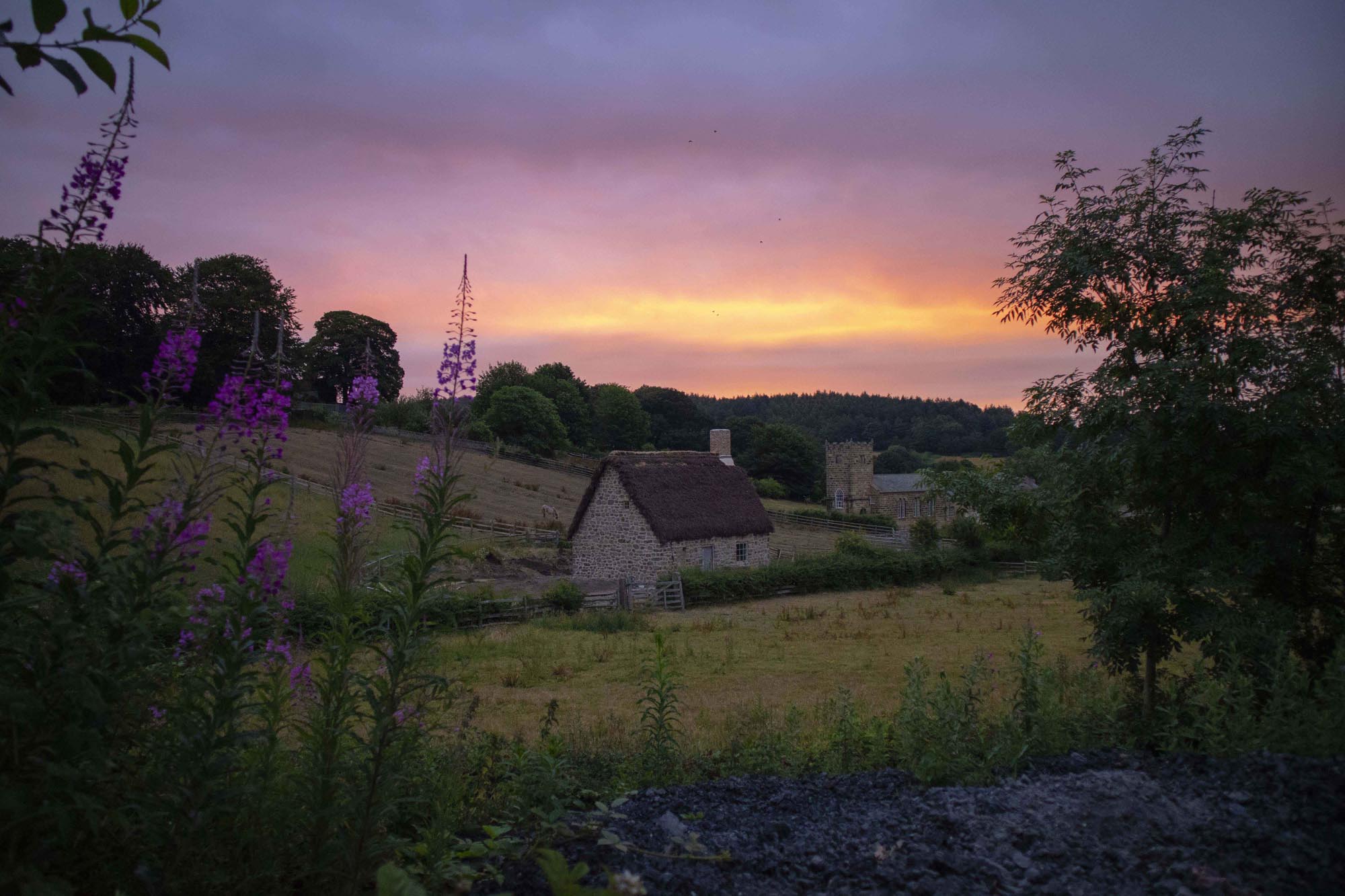 Sunrise at Joe the Quilter’s Cottage.

Read more about the murder of Joe the Quilter on the Northumberland Archives website.

Watch a video about the story of Joe the Quilter’s Cottage.

Beamish - The Living Museum of the North

Experience a real sense of your past at Beamish, and discover what life was like in North East England in the 1820s, 1900s, 1940s and 1950s. Beamish is a living, working museum, set in 300 acres of County Durham countryside. Costumed Engagers bring to life The 1900s Town and Pit…