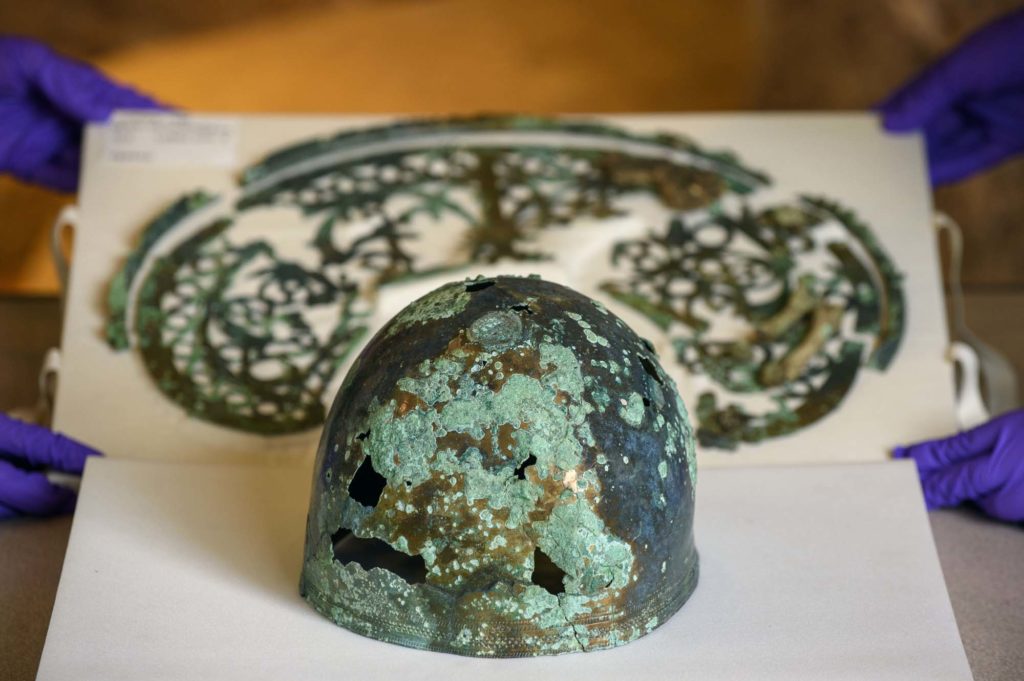 The helmet and crest of the Iron Age warrior. Photo Allan HutchingsPhotography

As the Novium in Chichester prepares to display the late Iron Age Bersted Warrior and his possessions in January 2020, we talk to archaeologist James Kenny about one of the most spectacular warrior burials ever found in Britain

When archaeologists arrived to investigate a grave discovery on the site of a new housing development near Chichester in West Sussex, they had little idea what was awaiting them.

A large scale archaeological excavation had been taking place ahead of the development in 2008 at North Bersted, and when the grave was uncovered Chichester District Council’s archaeologist, James Kenny, was one of the first people to view it.

“I was invited down to have a look at a burial which they’d found,” he recalls. “Now burials aren’t particularly rare discoveries, but they’re nice when they happen, so I went down there and I walked across the field not having any idea what I was going to see.”

What he saw was a large oblong hole, about two metres long and one and a half metres wide, within which could already be discerned the remains of the iron bindings of a box, the timber of which hadn’t survived. Lying within these ancient remnants were the vestiges of a burial: a skeleton, together with three large complete pots and a large bronze helmet. 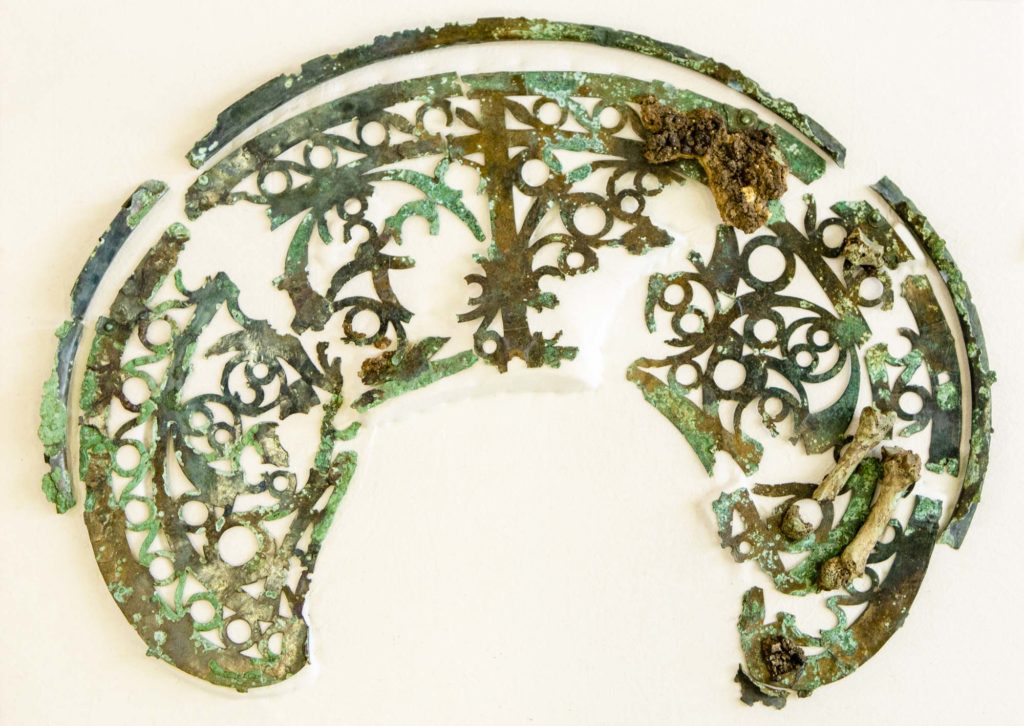 The helmet crest of the Bersted Warrior. 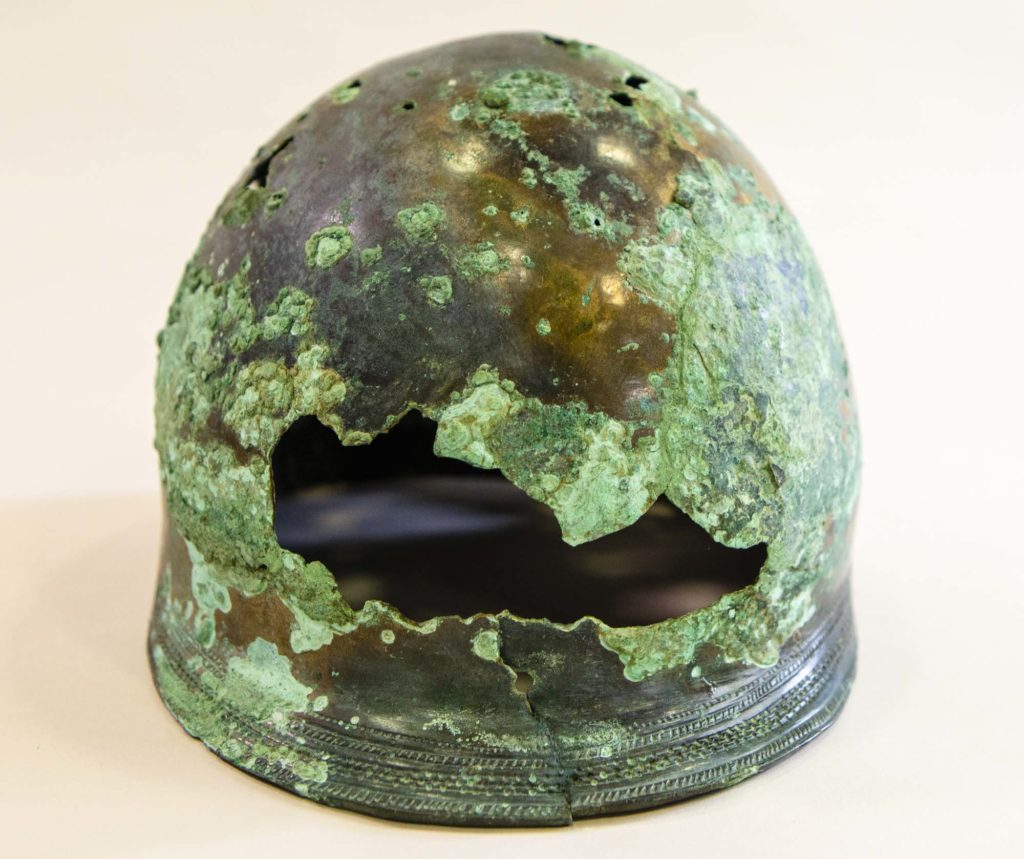 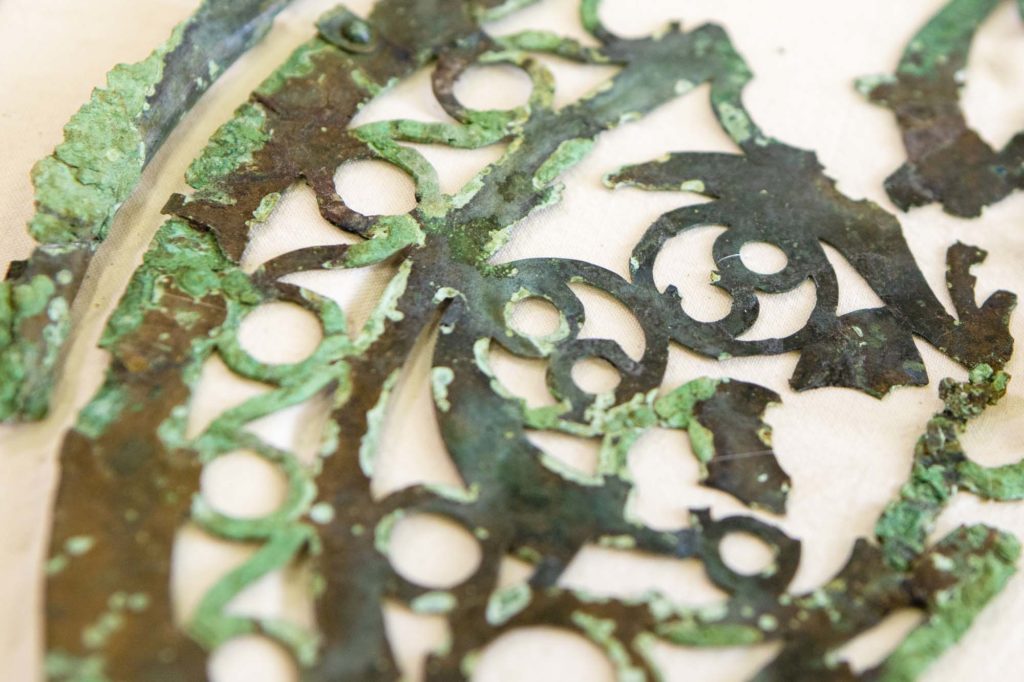 Close up of the crest.

“It was an absolutely fantastic thing to see,” says Kenny, “I’ve never seen a bronze helmet being dug out of the ground, let alone one coming out of what was obviously a late Iron Age warrior burial.”

Warrior burials themselves are rare enough, but says Kenny “I’m not aware of another one in Sussex before”.

“They have been found in Hampshire and Kent and I think there’s one from the Isle of Wight. So this was a first for me and it became obvious the more we looked at it that it was something exceptional – even as warrior burials go.”

As the excavation progressed it became evident that the ‘mystery warrior’ was lying in the most elaborately equipped warrior grave ever found in England. It has since been dated to around 50BC, the late Iron Age; a fascinating period of change when this part of southern Britain was coming under increasing Roman economic and cultural influence from across the channel – and was on the cusp of the full blown Roman invasion.

The warrior had been buried with a full suite of weapons, including a stunning sword in a decorated scabbard together with a spear, both of which had been ritually decommissioned by bending or breaking. There was also a large bronze boss from the warrior’s shield, but one of the most spectacular and completely unique finds were the pieces of the headdress for the helmet.

“When we first saw them in the ground we were all completely baffled as to what they might be,” says Kenny of the elaborate openwork remains. “Were they decorations from the front of the shield or were they something on the side of the box? Sometimes you get chariot burials in this period, so was it possibly some sort of decoration off a chariot?” 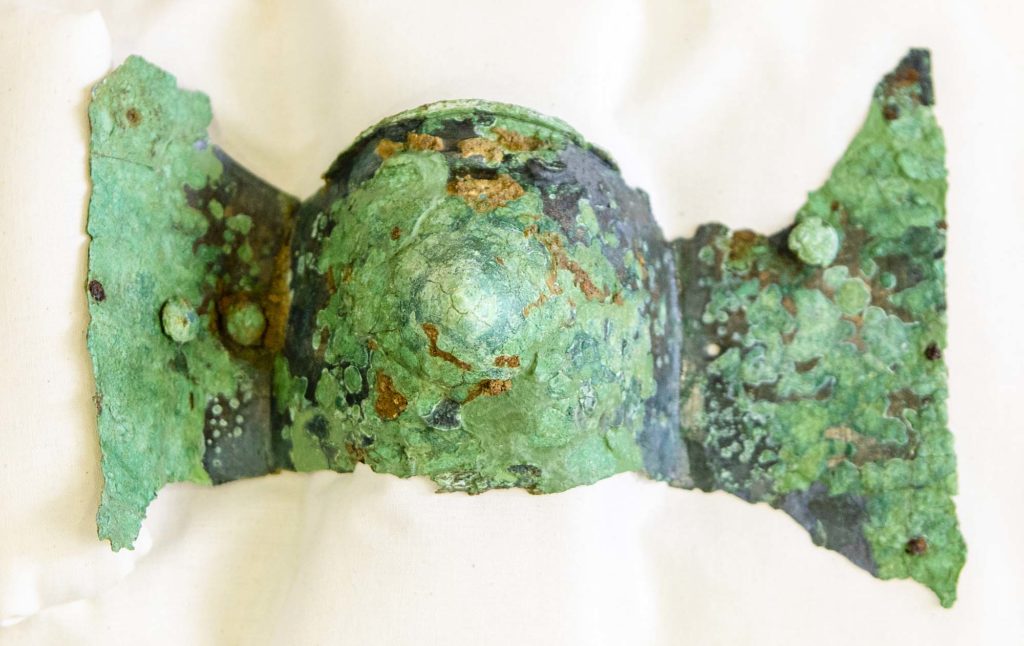 Shield boss of the Bursted Warrior. 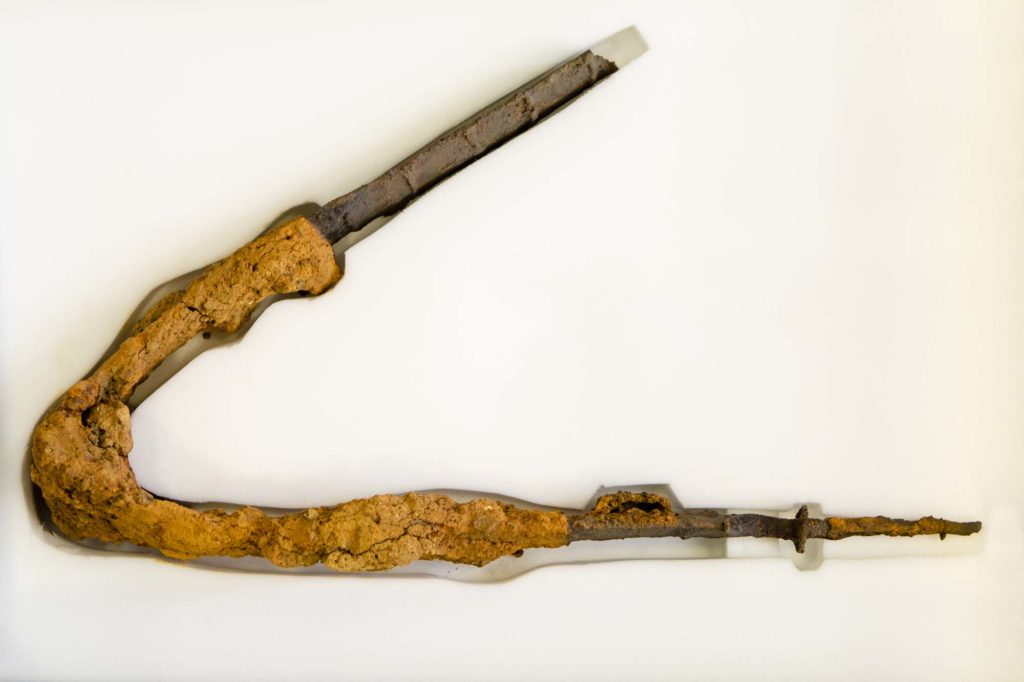 Bent sword of the Bersted warrior.

But as the specialists in metalwork of the Iron Age period began looking at it more closely they realised it was a headdress, and the helmet was a vehicle for the support of the opulent and exquisitely designed bronze openwork crest, one part of which went across the front of the top of the helmet and the other centred on the back of it – rather like a Mohican haircut.

Experts think it would have been further surmounted by a horsehair plume or something similar dyed a bright colour.

So who in late Iron Age Britain would have worn such an opulently decorated headdress? Analysis of the skeleton, which shows no sign of trauma, reveals a robust man in his mid-forties who stood to about 5 feet 8 inches. He had very strong legs, which almost certainly came from habitually riding a horse and a much stronger right arm than left, which in this context would seem to indicate sword practice.

“You’ve got to imagine this bloke done up in all of his gear, with this thing on his head, possibly sitting on a horse and you have somebody very, very impressive-looking, which is obviously the point,” says Kenny.

Analysis of his teeth demonstrated that he probably came from an area either in Eastern Britain or North-Eastern Gaul and probably not Sussex, which, says Kenny, “may well fit in with what history is telling us about this period”.

“There is a great deal of interchange between the tribes on either side of the Channel who seem to be related to each other. This man may well have been somebody who was escaping from the conflict in Gaul.

“We know there were men like that because Caesar describes them. He describes the activities of a man called Commius, who was actually involved on both sides as the war went on, and then later on he turns up on Iron Age coinage in this neck of the woods. So we know that people were getting away from the Roman conquest of Gaul and ending up in Britain. Maybe he was one of the soldiers that got away?” 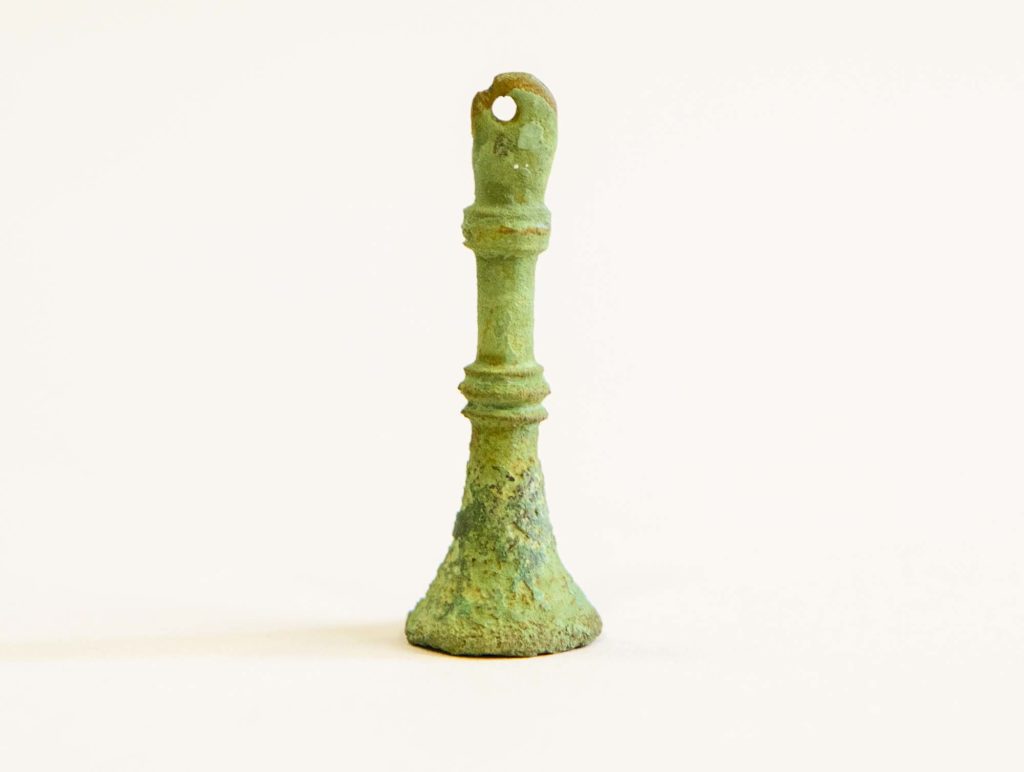 A mount from the helmet and crest. 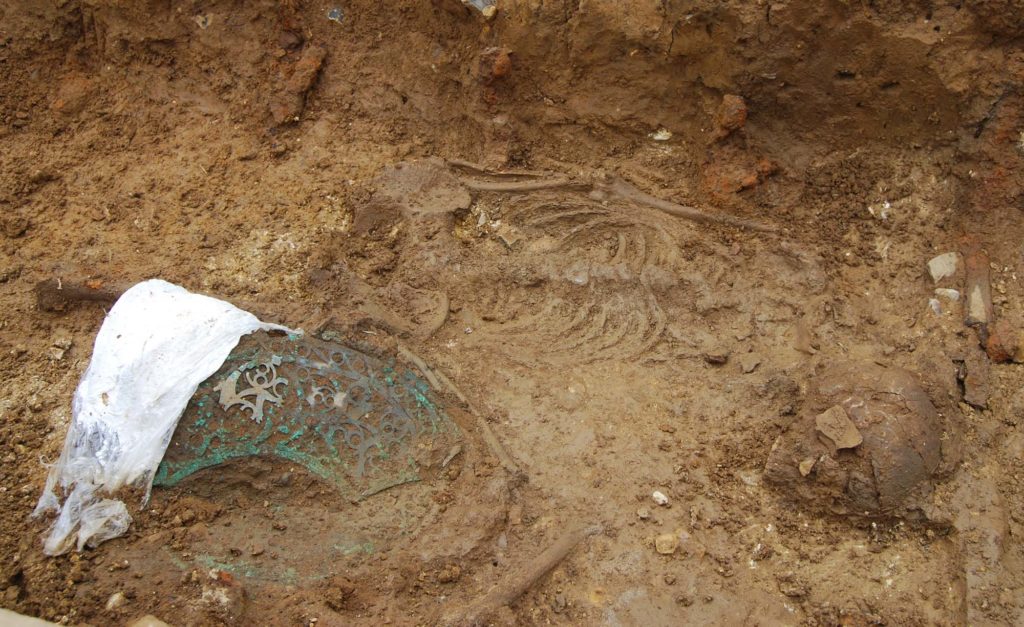 The grave in Bersted. 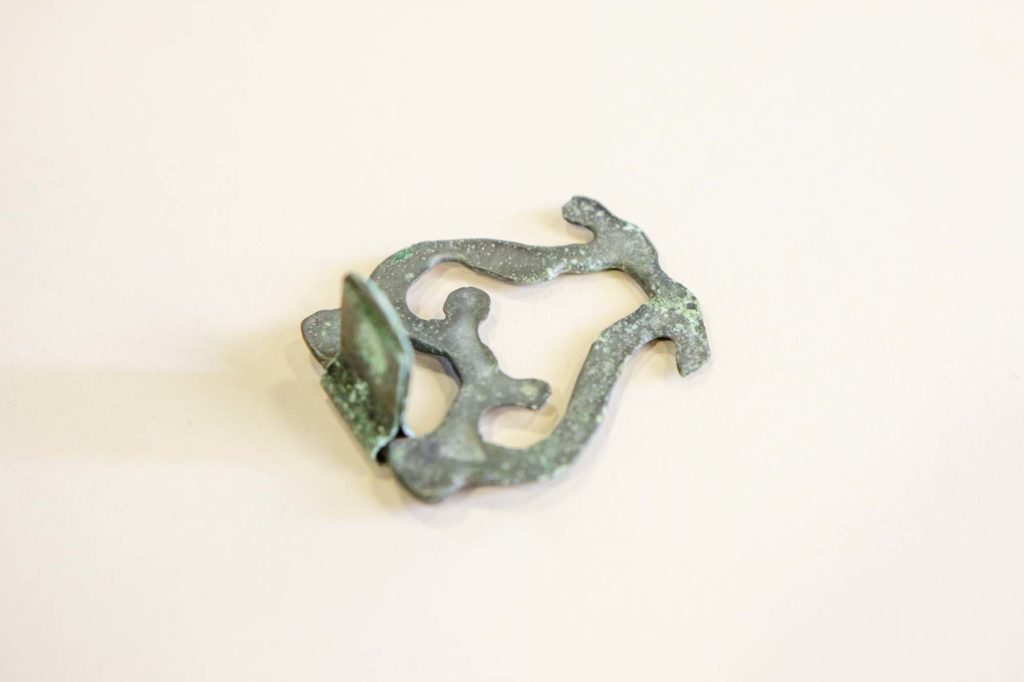 A clasp from the grave find.

Perhaps the mystery warrior was a resistance figure who brought with him the story of war, and strategic military knowledge of how to fight the Roman army?

“It does fit into this sort of historical context and certainly this part of Sussex seems to have been the southern part of a tribal area which went up as far as Silchester near Newbury,” says Kenny. “This tribe seems to have had close connections with the Belgic tribes who were at the forefront of the opposition to Julius Caesar as he hacked his way through Gaul.

“So the connections are there; we’ve got in the late Iron Age period the beginnings of a sort of civilisation if you like, there’s a sort of urbanisation beginning and you can see elements of it around Chichester and around Silchester and they start to mint coins. One even wonders what would have happened if the Romans hadn’t made it over?”

The exhibition opening on January 25 2020 will be the first time the skeleton of this extraordinary Iron Age Warrior and his burial possessions has gone on public display. It will explore the life, health and death of this fascinating man and attempt to explain some of the questions that have been raised by the circumstances of his burial and the ongoing investigation into it.

Along the way it will also illuminate a critical point in Britain’s history – the years immediately preceding the Roman invasion, when the south coast was at the heart of the great events that ultimately shaped Britain as a nation. 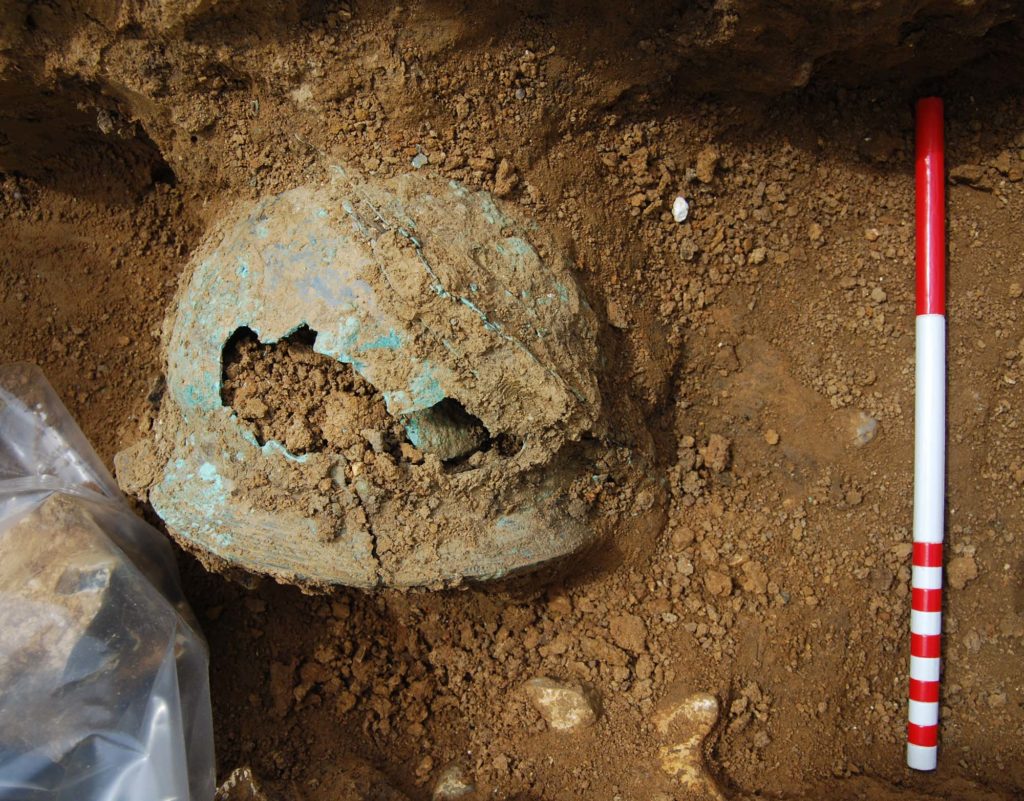 The helmet in situ. 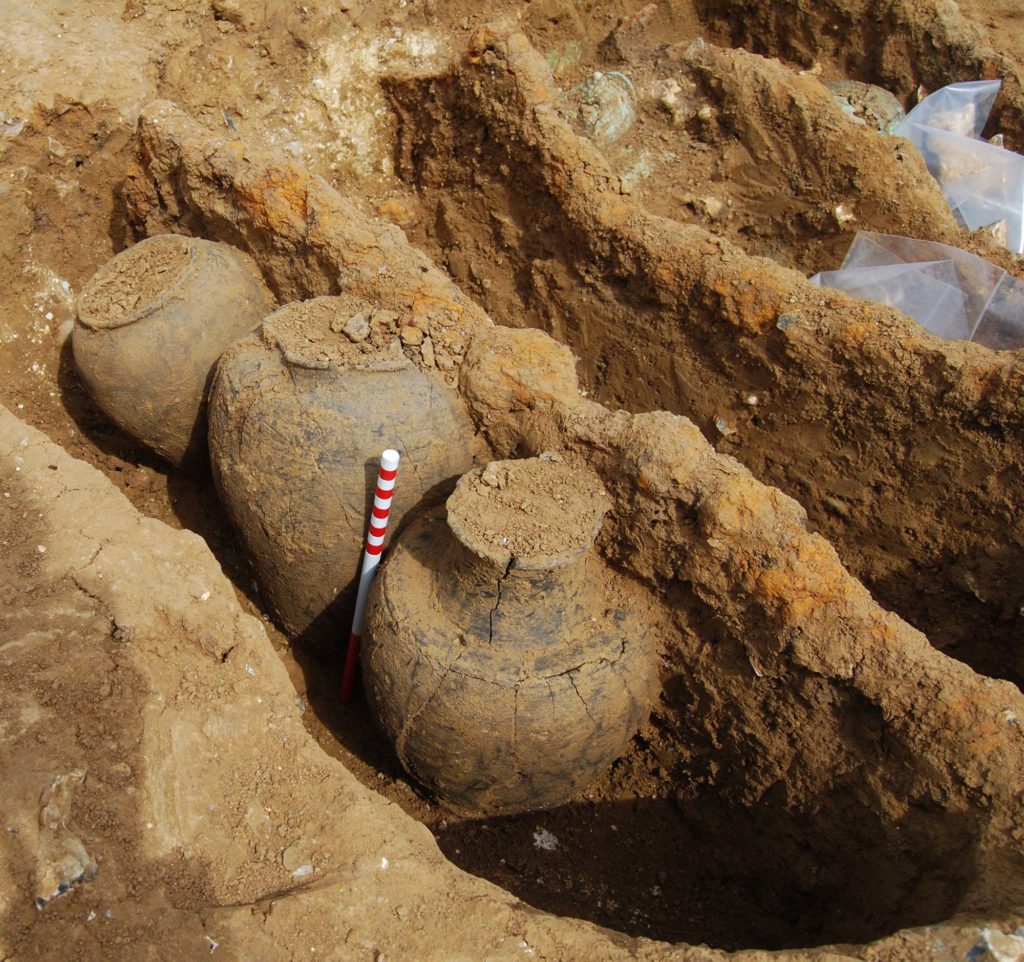 A series of pots were found with the burial. 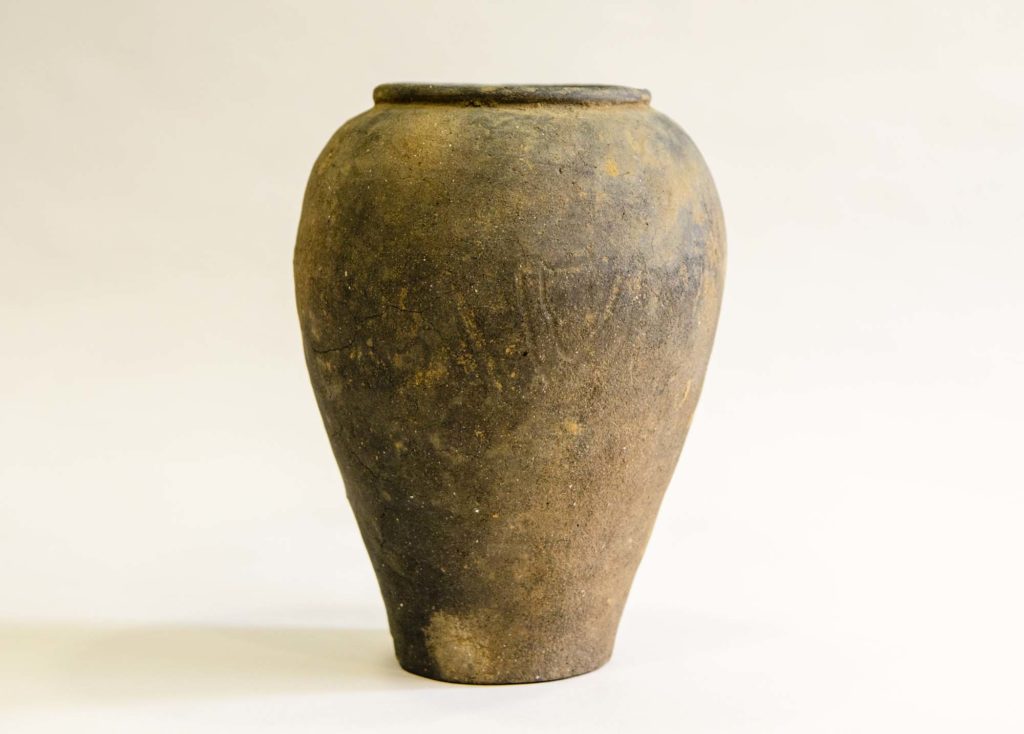 One of the urns recovered from the burial.

The exhibition has been made possible due to Berkeley Homes generously donating the finds, a £50,000 grant from the National Lottery Heritage Fund and sponsorship from Irwin Mitchell.

The Mystery Warrior: The North Bersted Man’ exhibition will open at the Novium on January 25 2020.

The Novium offers intriguing stories from Chichester District connected with extraordinary artefacts in a brand new, state-of-the-art building. Alongside the commitment to preserve our rich local heritage, The Novium also provides visitors with a glimpse into the past 500,000 years. Set in the heart of Chichester, The Novium features exciting…