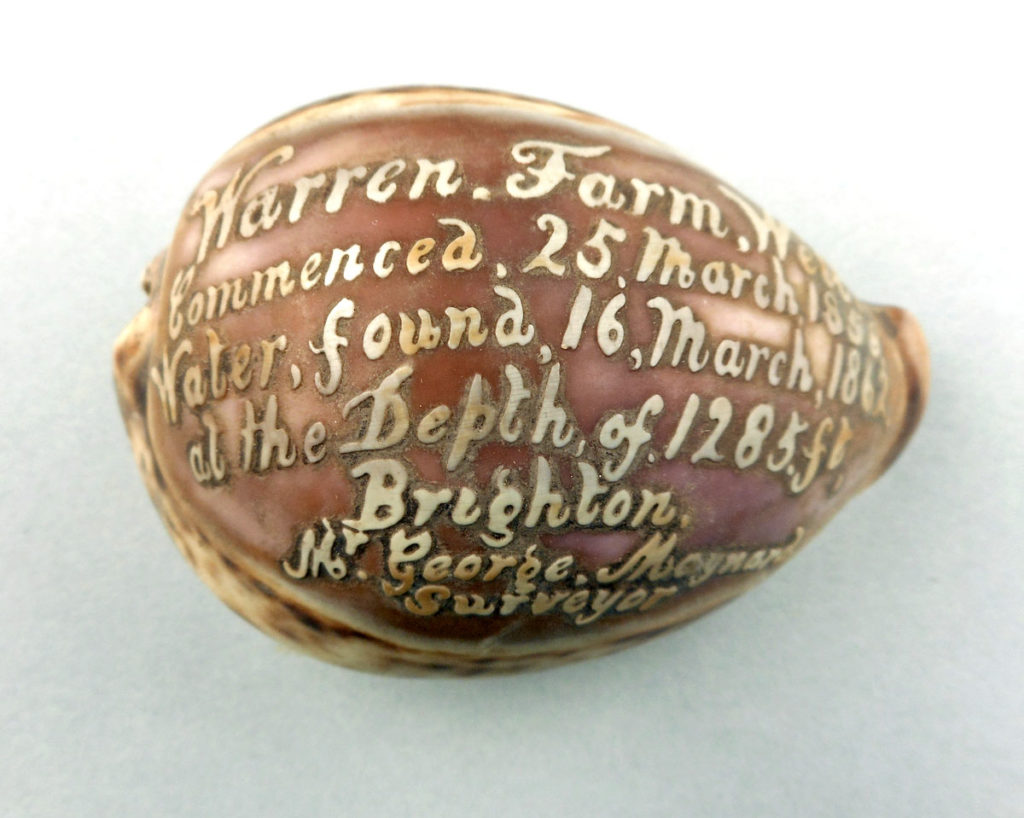 The unassuming Warren Farm Well in hilly Woodingdean on the outskirts of Brighton may not look like it warrants a world record, or deserves an international claim to fame, but looks can be deceiving.

As deep as the Empire State Building is tall, the well is as much an example of Victorian bullheadedness as it is engineering.

In the 1850s, when the Brighton Corporation decided to build Warren Farm School, an institution set up as accommodation for the children of men and women living in the local workhouse, on a remote hill outside Brighton they faced the tricky decision of how to supply it with fresh water.

The corporation, not wanting to pay out to a private water company to have water piped in from the local waterworks, decided to sink a new well for the use of the school. What ensued turned out to be a rather elaborate cost-cutting exercise.

Expecting to find water just below sea level, the Guardians of the Corporation planned to dig a 400ft deep shaft, and work commenced in March 1858. Construction took place around the clock with a team of 45 men working day and night to reach the promised goal far below the hill’s surface. 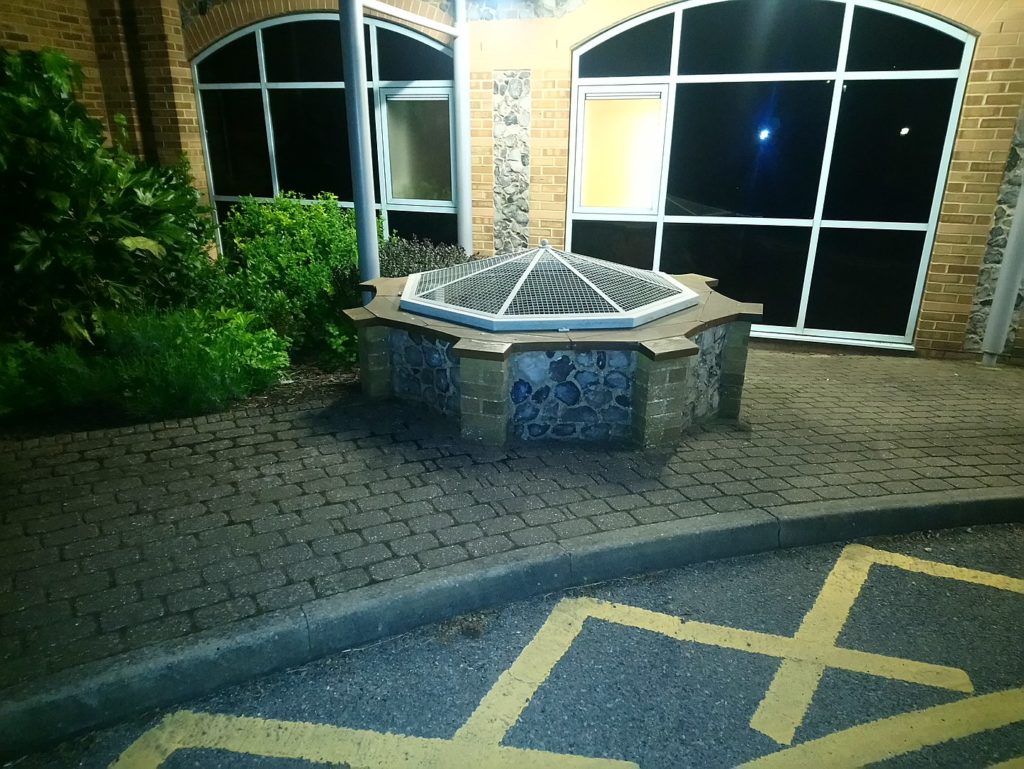 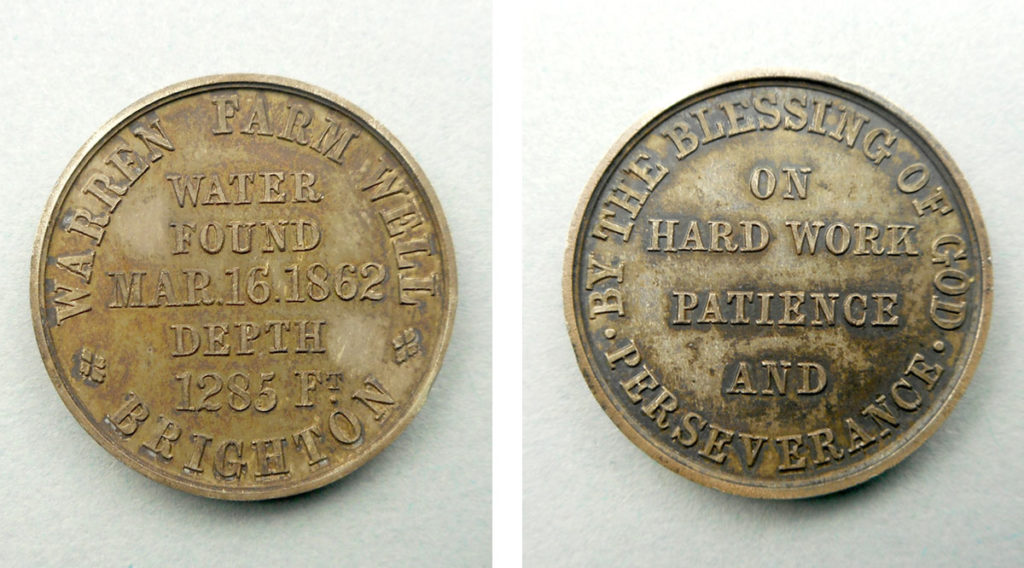 But once they passed the magic 400ft there was still no sign of water and so the workers descended deeper and deeper into the chalk to find the elusive source. The men, descending rickety ladders, continued digging, lining the walls of the well shaft with bricks as they went.

Eventually, hundreds of feet below ground, the air grew hot and suffocating. Pipes supplying air pumped by steam engine were sent down so that workers could breathe easy in the increasingly stifling well shaft. The lengths of the shifts the men were given was based on the depth they were working at, with those at the surface working 12 hours, those part way down the shaft working ten, and those toiling at the bottom of the well working just six. 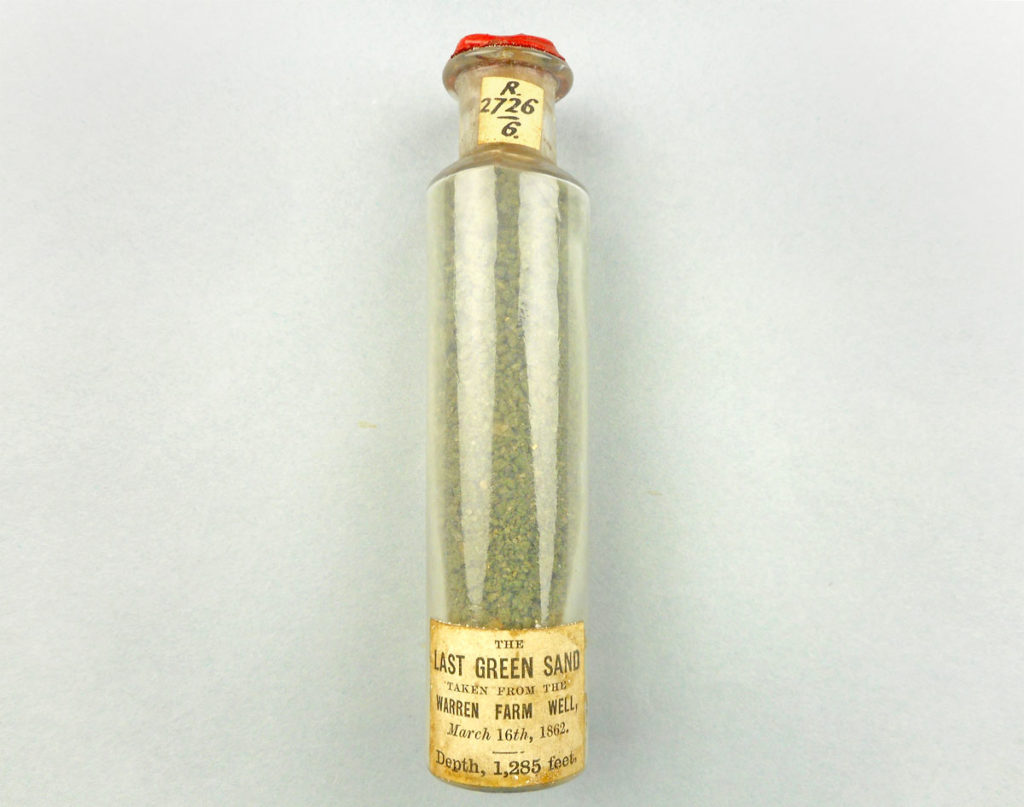 It wasn’t until March 1862 that they finally hit green sand – a sure sign that they were indeed close to finding water. By the 16th March they had reached a whopping 1,285 feet below the surface and at around 10:30pm when a new shift of workers descended into the shaft to commence digging overnight they were shocked to find a ‘rushing, rumbling sound’ and darkness where gas lamps has earlier lit the way.

After four years of backbreaking work, and a huge public expense, the now infamous well had finally hit water. Within an hour and a half the well was full with 400ft of clean, fresh water, and it was still rising. 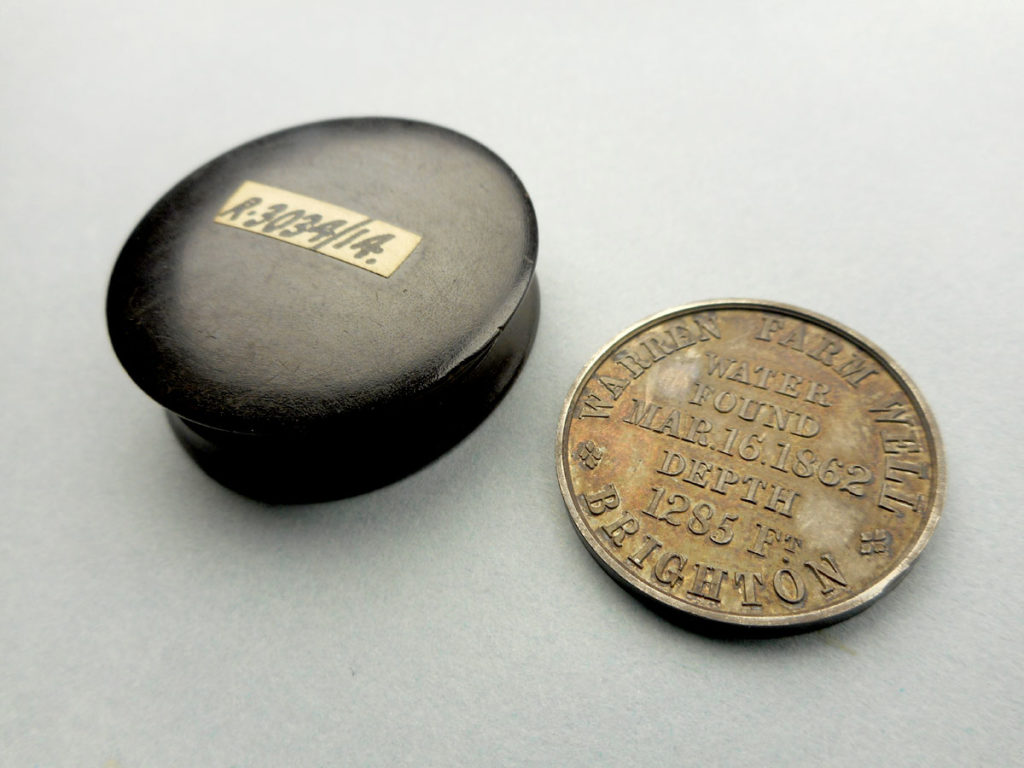 According to the Brighton Herald newspaper the well until then had been regarded by the public as a “sort of monster that swallowed a hundred pounds of the rate-payers’ money weekly and yielded nothing in return” so what followed was a kind of well-mania – a period of extravagant public rejoicing.

Brighton Museum has a variety of the wonderful pieces of well memorabilia which demonstrate the delight – and relief – that the well was successful, including commemorative coins and inscribed cowrie shells.

The day after finally reaching water, church bells rang out to signal the joyful news, and a crowd of people gathered to watch the first bucket of water being raised to the surface. A vial of this water – sadly now dried up – is one precious relic of the momentous occasion. 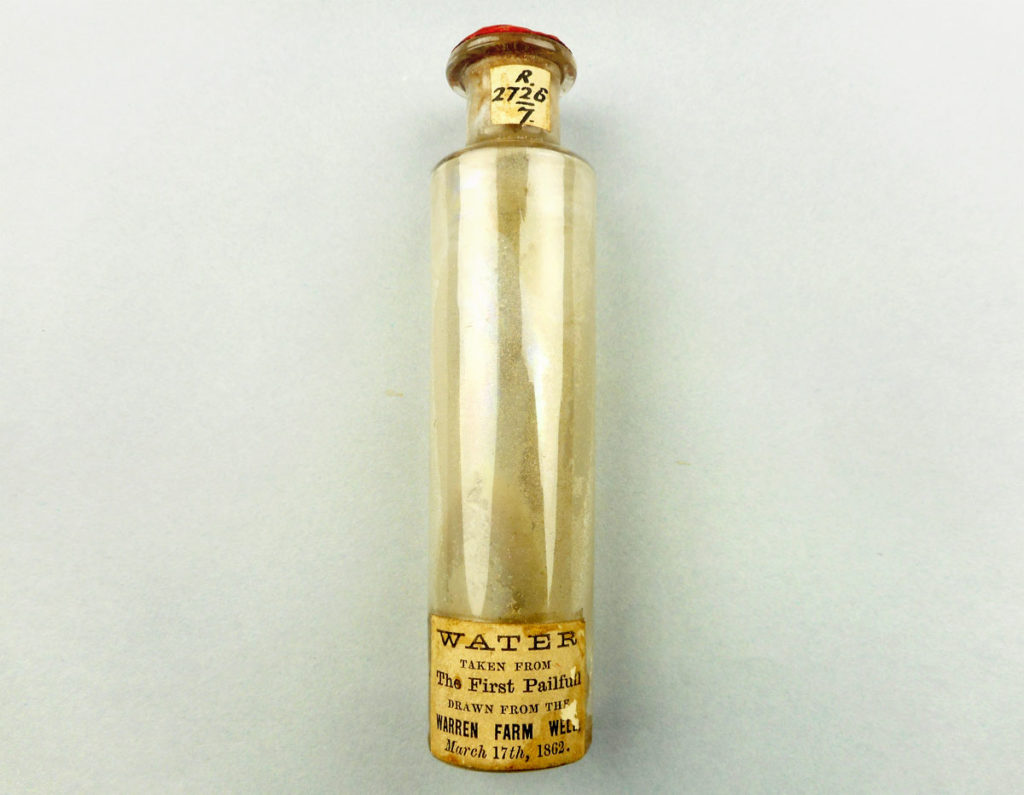 A vial of water from the first pailful drawn from the Warren Farm Well © Royal Pavilion & Museums, Brighton & Hove 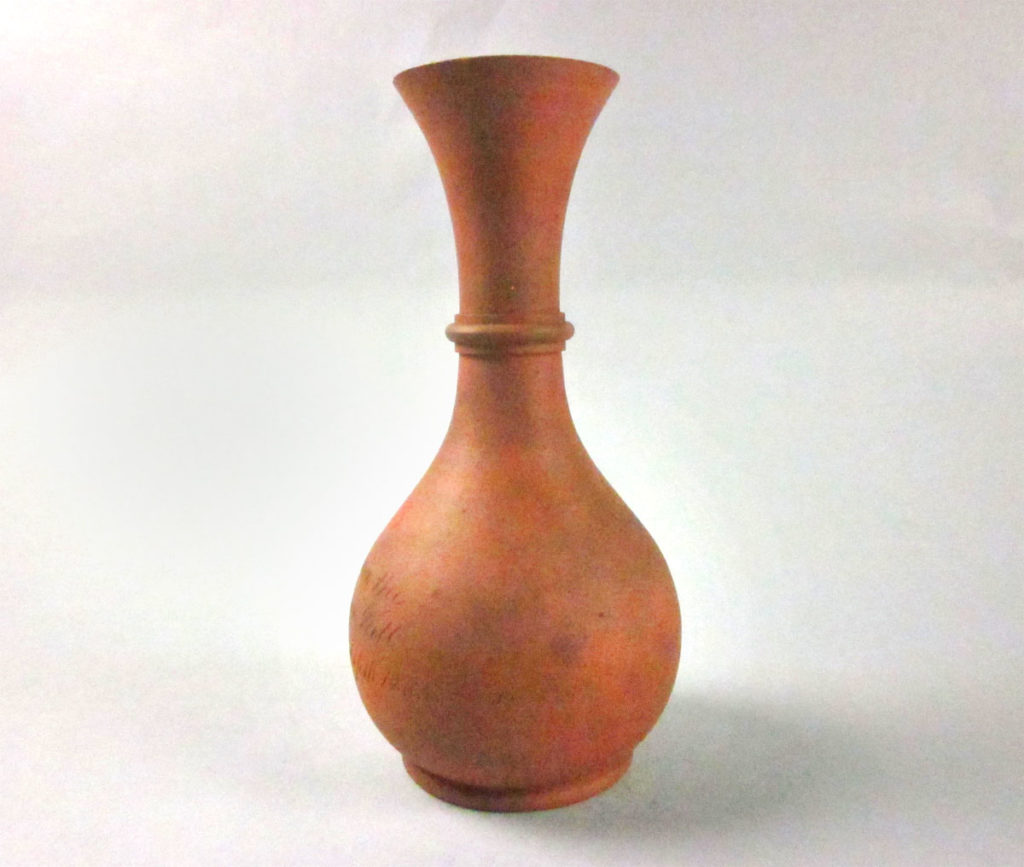 A vase made from clay excavated during the sinking of Warren Farm Well © Royal Pavilion & Museums, Brighton & Hove

Another, a simple vase made from clay excavated from the well shaft, is one of the more unusual objects associated with the triumph, but proves that even the simplest, humblest of objects can have spectacular stories to tell.

Despite the massive cost, the enormous effort and the promise that the well would save the town a fortune each year in water rates, it was used for just four years, after which the well was abandoned in favour of a more practical mains supply.

And though the school is long gone the well remains in place, now outside a hospital, with a modest modern surround and small plaque. Though it may not look particularly significant, the old Warren Farm Well remains a testament to perseverance, human endeavour, and stubbornness.

To get an idea of what an amazing feat of engineering the well was, this animation by Tech Insider is a hypnotising journey into the centre of the Earth, showing how deep humans have travelled towards the Earth’s core.

You can see these images and many more of Brighton’s Royal Pavilion & Museums collection on the digital media bank: dams-brightonmuseums.org.uk