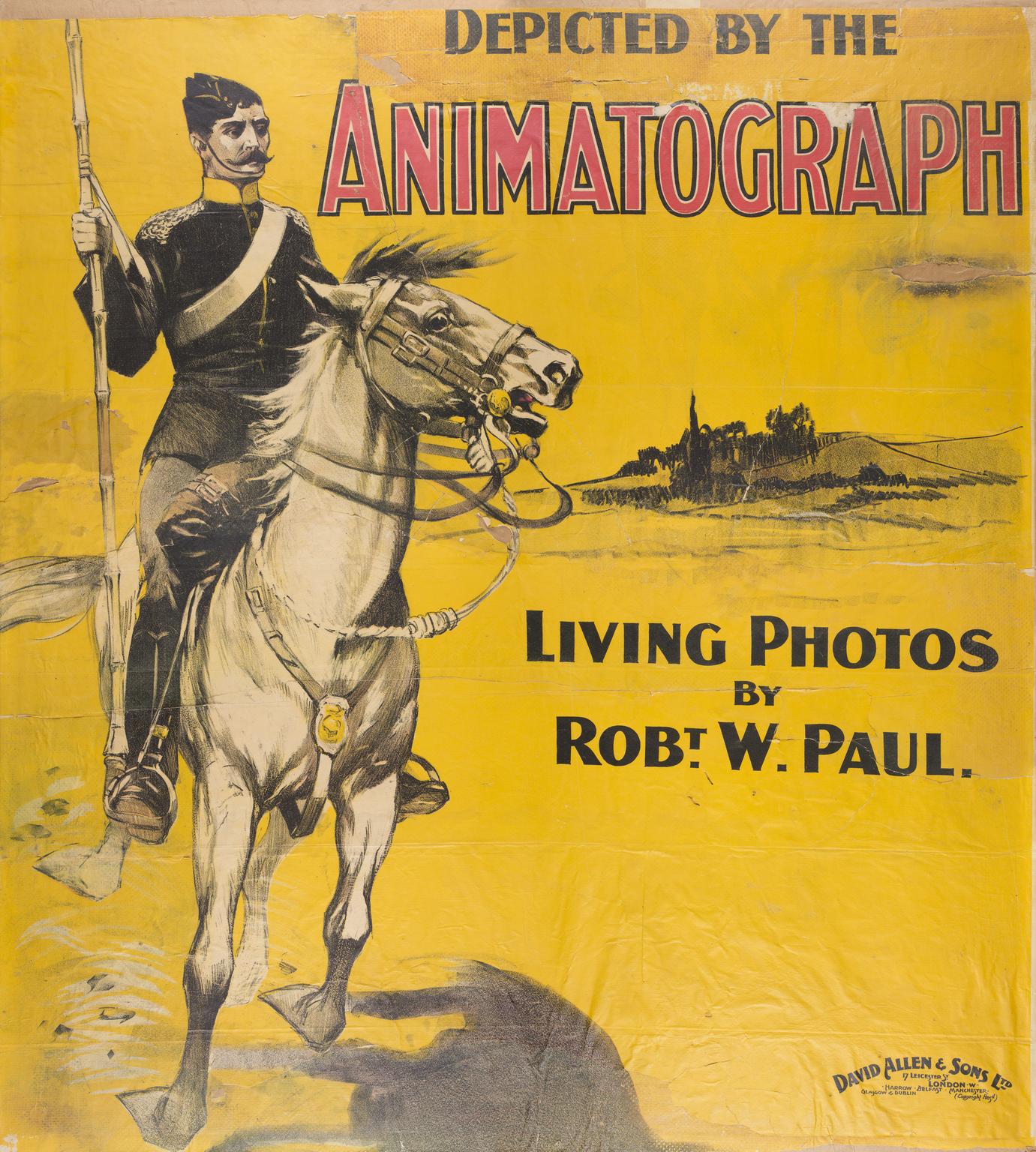 Early framed cinema poster inscribed “Depicted by the Animatograph. Living photos by Robt. W. Paul”, c. 1896. Made by David Allen & Sons Ltd. London © The Board of Trustees of the Science Museum, London

Ahead of a new exhibition at the National Science and Media Museum, we talk to film curator Toni Booth about forgotten British film pioneer Robert Paul

When we talk about the birth of cinema, some people may have heard of the French Lumière brothers, and perhaps the American Thomas Edison, but it’s unlikely anyone beyond the most avid screen historians will have heard of an English cinema pioneer called Robert Paul.

This year marks the 150th anniversary of his birth and at the National Science and Media Museum in Bradford they are celebrating by telling his story, revealing how he built the first commercially successful film equipment in Britain in the 1890s and paved the way for a new national industry.

The Forgotten Showman: How Robert Paul Invented British Cinema is an immersive exploration of the scale of this Victorian pioneer’s innovation and enterprise, using a collection that houses some of Paul’s surviving equipment and the remnants of his early films to reveal his place in cinema history. 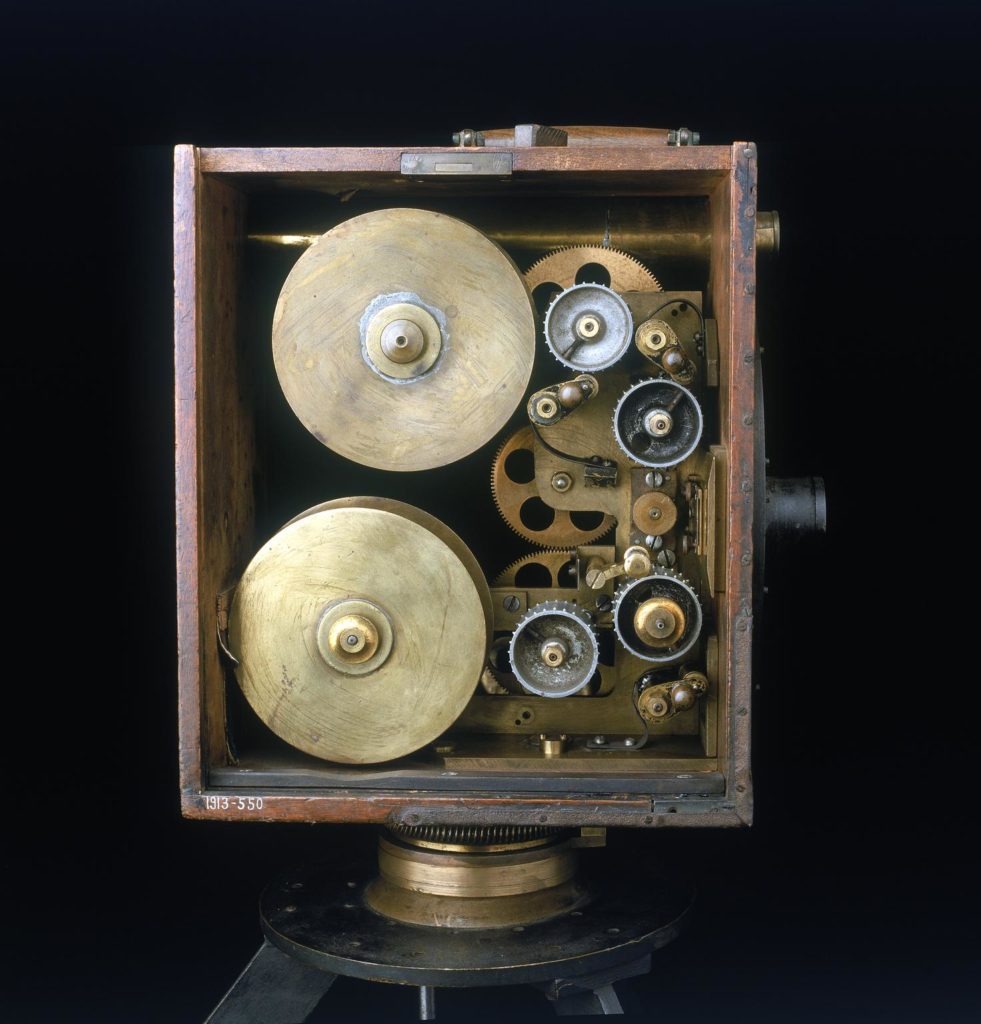 Robert Paul’s Cinematograph camera no. 2. © The Board of Trustees of the Science Museum 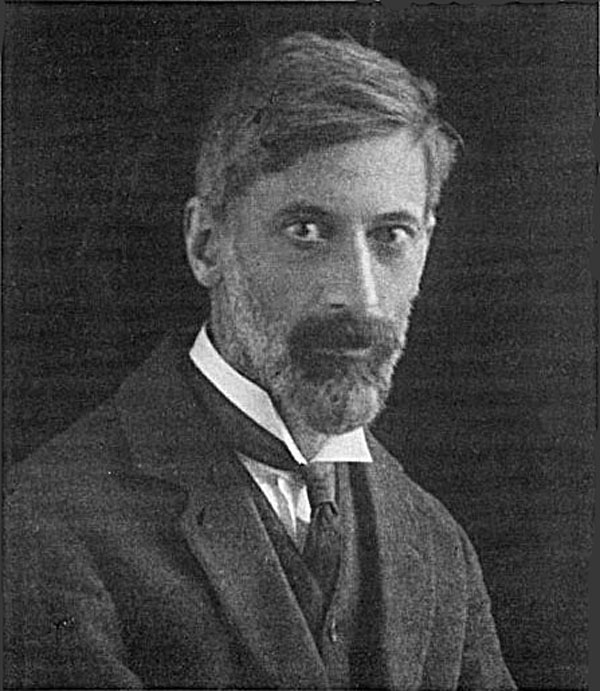 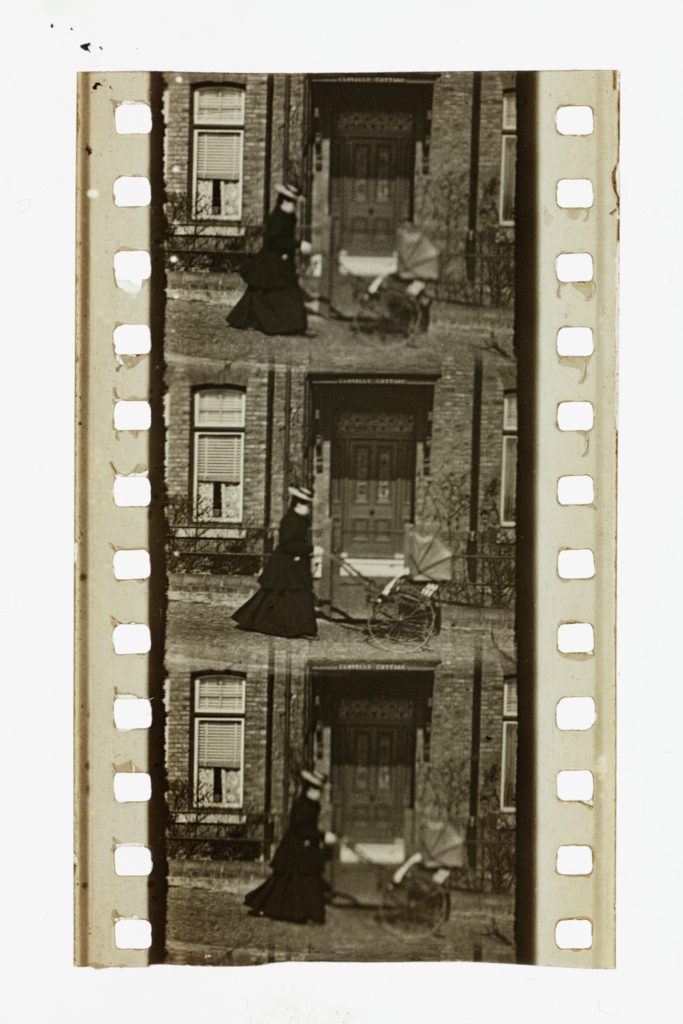 “Paul started off as a scientific instrument maker in the early 1890s, a time when there was no cinema industry but when people were trying to figure out how to capture and show moving pictures,” says co-curator and Curator of Film at the Museum, Toni Booth. “In 1894 two Greek entrepreneurs knocked on his door and said “Can you make replicas of Edison’s Kinetoscope machine for us please?””

The Kinetoscope was the new popular moving picture machine, not a projector but a viewing machine – essentially a wooden box – which an individual would peer into to see a short film lasting between 10 and 20 seconds.

“People hadn’t seen moving pictures from life before and parlours were set up, with rows and rows of Kinetoscopes all of which would have a different film on them. You would go in and pay your money, watch one film and if you enjoyed it you’d pay to watch another one, then another one, and another one.”

Paul’s version of the already trendy Kinetoscope was an immediate hit. But not with Thomas Edison, who swiftly cut off the supply of films to the British-made version of his fledgling movie machine. Edison went on to successfully sue the two Greek entrepreneurs, but Paul got away with it.

For the ever-entrepreneurial Paul, Edison’s intervention was the lightbulb moment. Realising he would have to start making his own films he enlisted the help of a photographer called Birt Acres – who went on to become the first man to successfully take and project a 35 mm film in England.

In just six weeks during February and March 1896 Acres and Paul managed to successfully design, build and test a camera, make several very popular films on 35 mm film stock, fall out with each other over rights, go their separate ways and become competitors. 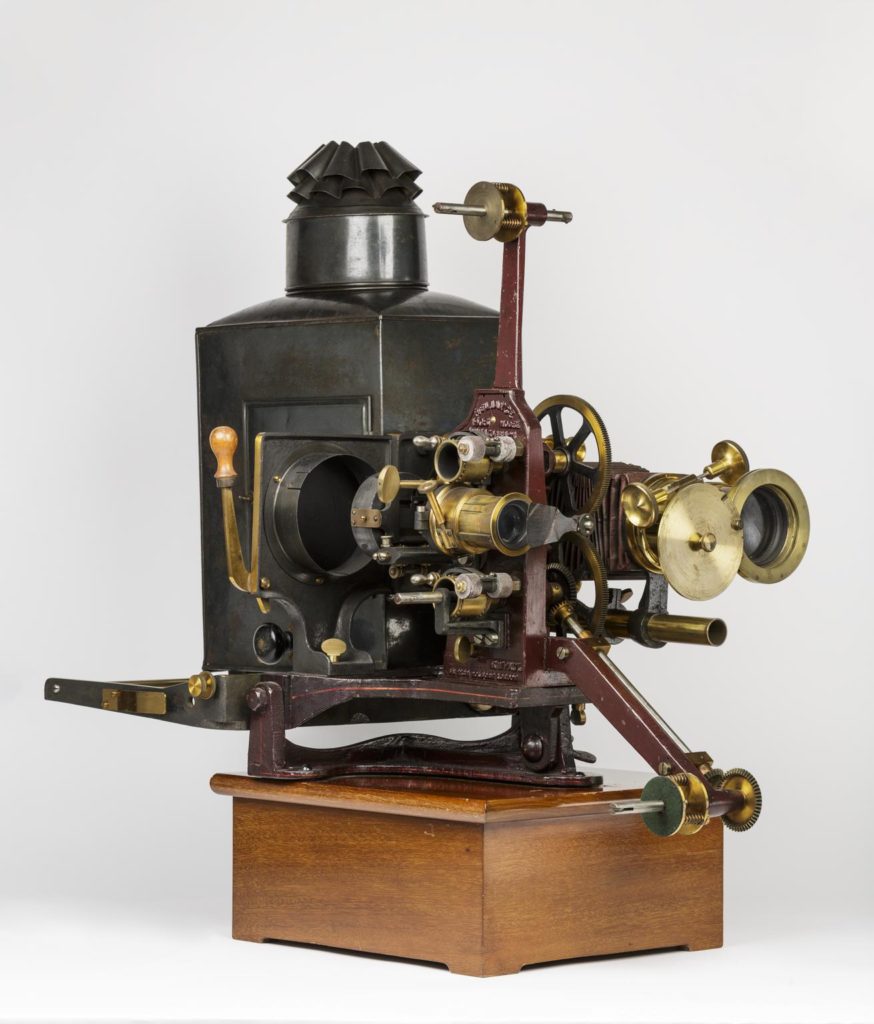 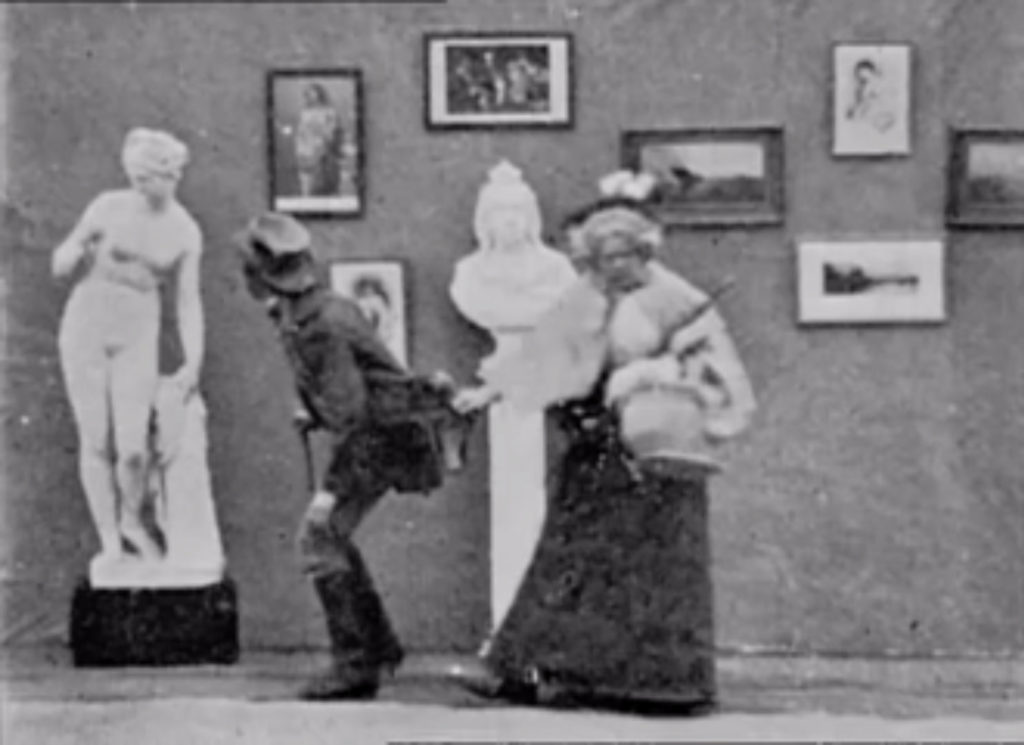 A surviving still from Robert Paul’s 1898 short film Come Along, Do!, one of the first ever films to feature more than one shot.

Paul then realised that what he needed was a way of projecting films so groups of paying punters could watch them together.

“At this point Paul starts to develop his own projector, called the Theatrograph projector and demonstrates it in February of 1896 on exactly the same day that the Lumières first demonstrate their projector in London, which is one of those curious incidents of history.

“Subsequently the Lumières found a permanent home for their presentations a couple of weeks ahead of Paul, but in March of that year they both start putting on cinema shows as part of larger entertainments in theatres in Leicester Square.”

In 1896 there were no cinema buildings and with films running to about 10 minutes they were usually squeezed in between comedians, dancers and singers at the music hall, where it quickly became part of the landscape of popular entertainment.

“You find if you look at theatre bills from this point you start getting inserts, ‘moving picture show’, ‘animated photographs’, these sort of terms to describe what we now call film or cinema,” says Booth. “And they were terrifically successful. Paul was engaged for a few weeks to begin with, but his shows continued at the Alhambra Theatre in Leicester Square for two years.”

This success meant Paul now had to make more movies to keep up with the demand, but as an instrument maker at heart he was also happy to sell his projectors and cameras to whoever wanted to buy them. The Lumière’s Cinematograph could only be rented – along with a projectionist. As a result Paul became the first in the moving picture business to sell apparatus, films and projection equipment to the wider market. His customers even included the French illusionist and film director Georges Méliès whose ground-breaking films include the 1902 cinematic milestone, A Trip to the Moon.

Paul’s own movie making business also developed, and in 1898 he built an outdoor studio (all early films were shot outdoors using natural daylight) then an indoor studio with electric lighting, which enabled him to control the environment and produce trick films.

Double exposures, the appearance of ghosts, stopping the camera, removing something from the frame and putting something else in so things appeared and disappeared as if by magic – all of these techniques became his stock in trade. He also took inspiration from the novel The Time Machine by H.G Wells and explored the possibility of creating an immersive film experience for audiences as a forerunner to today’s 4D cinema.

“His studio had trapdoors in it and all this kind of stuff,” adds Booth, “which allowed the people he was now employing to do more creative things because, although he started off shooting things himself, he soon stepped away as any CEO would do. 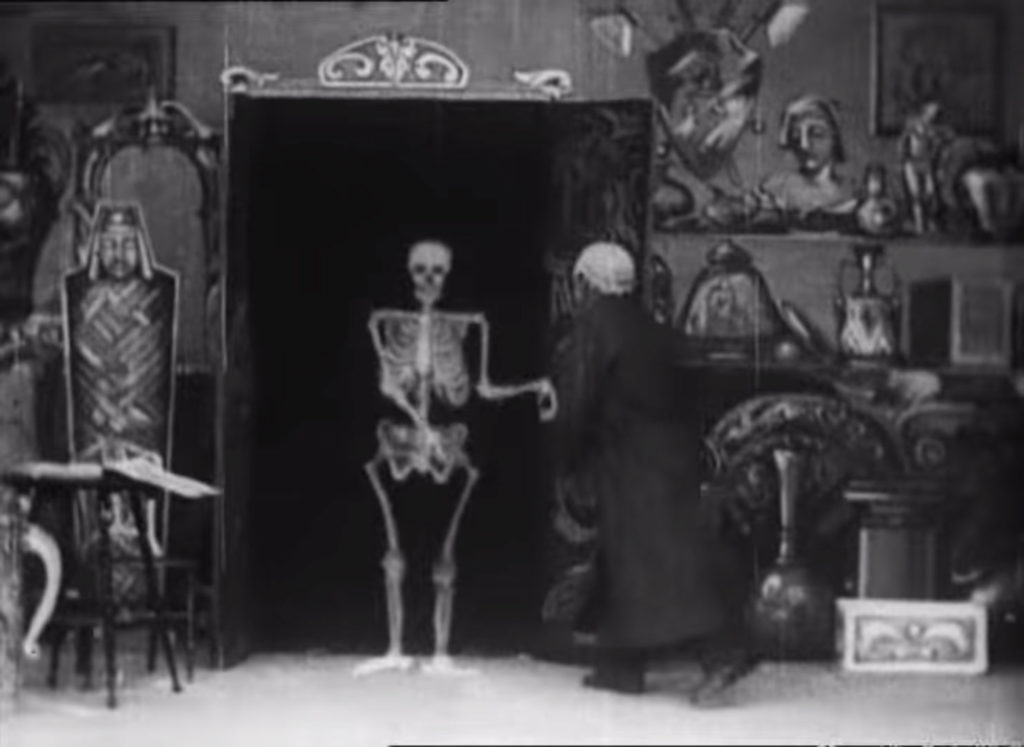 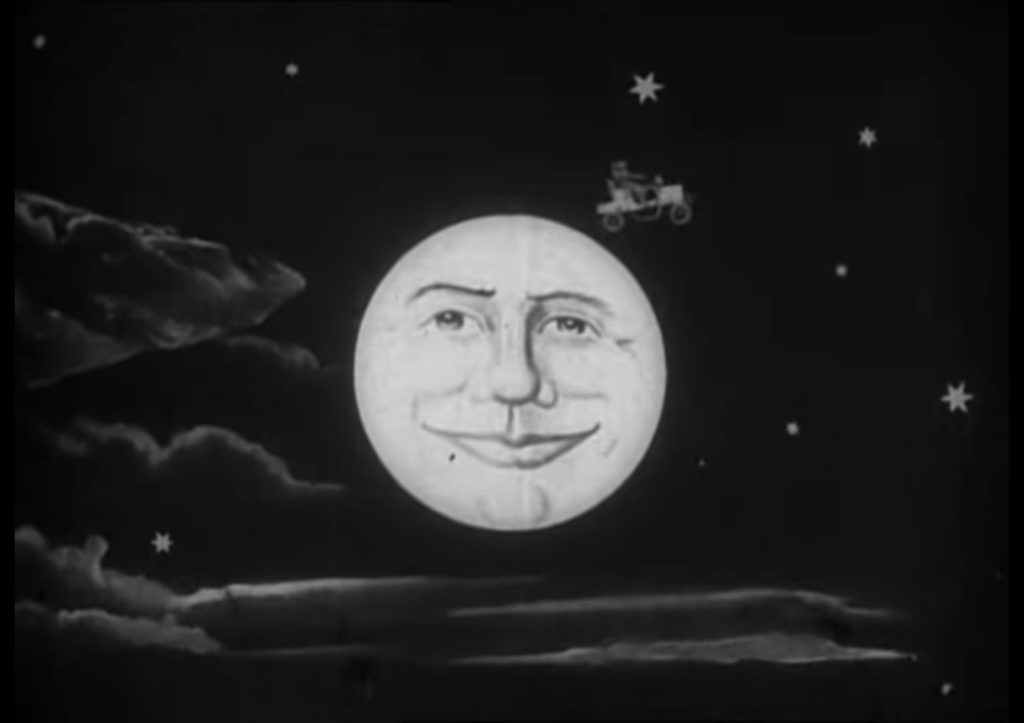 A still from the 1906 film The ‘?’ Motorist, directed by Walter R Booth and produced by Robert Paul

“There were many strings to his bow at this point in the film-making and he continued to be hugely successful, and then in 1909 he started to get a bit fed up with it. The business had changed a lot in those 14 or 15 years, there were lots more films being made, lots more production companies. Films were becoming more elaborate and longer and I think the business environment for him was not as good as it was. It was more trouble than the commercial return.

“So in 1910 he stops, he’s had enough, he burns his negatives and steps away from cinema.”

Paul’s company, R W Paul Theatrograph Animated Pictures, made around 800 films. So far about only 80 of them have been discovered – thanks in the main to prints of them still being in circulation at the time. In the collections of the National Science and Media Museum are surviving frames from the first fiction film The Soldier’s Courtship (1896), a reconstruction of which is being screened as part of the exhibition, and the first two-shot film in which the camera cuts between scenes in Come Along, Do! (1898). The earliest on-screen titling and intertitles, can also be seen in Scrooge, or Marley’s Ghost (1901).

Original objects showcasing innovations in cinema are also in the exhibition including Paul’s Theatrograph projector, the 35mm camera made and used by Paul to film the Diamond Jubilee Procession of Queen Victoria in 1897 and original frames from one of his earliest works, Incident at Clovelly Cottage made with Birt Acres in February 1895.

Intriguingly, some of these treasures of early British cinema survive because of Paul himself, who in 1913 contacted the Science Museum and offered to give some of his equipment to the museum for display.

“I think he was interested in solidifying his place in the history of cinema,” says Booth, “because he had an awareness that what he did was relevant and should be memorialised in some way. He continued, even when he left the film industry, to talk about his experiences a great deal right up until his death [in 1943].

“By the time of Paul’s donation in 1913 there were already purpose-built cinemas, the industry had grown significantly and people were ‘going to the movies’ to watch films that were up to an hour in length.” 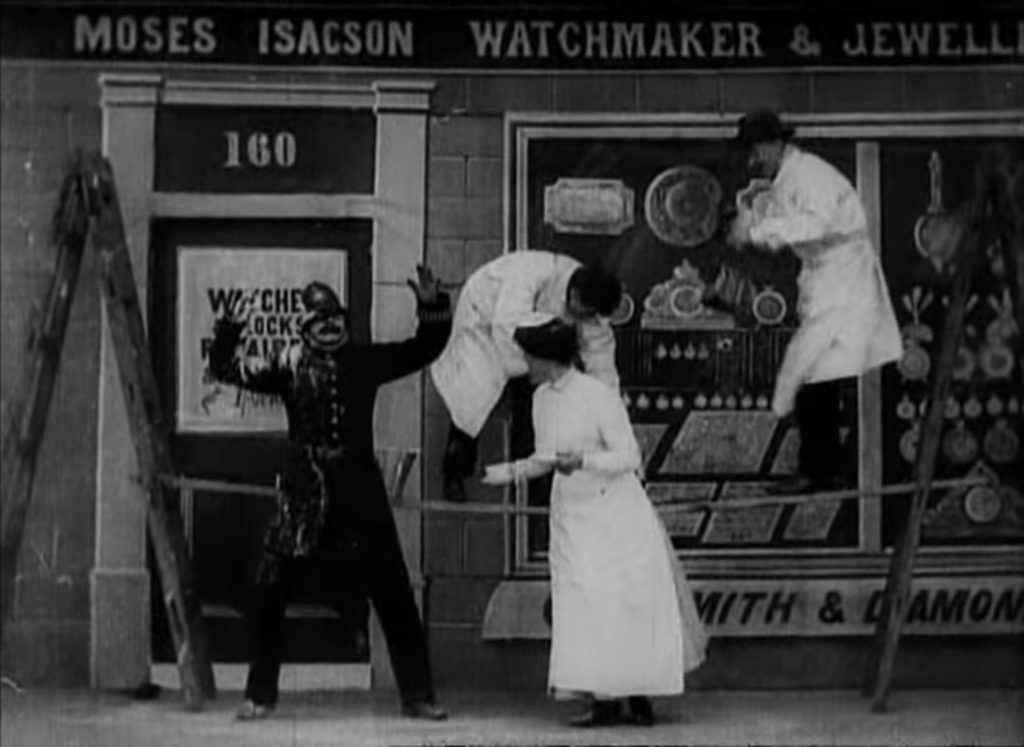 A still from Robert Paul’s 1905 film The Unfortunate Policeman 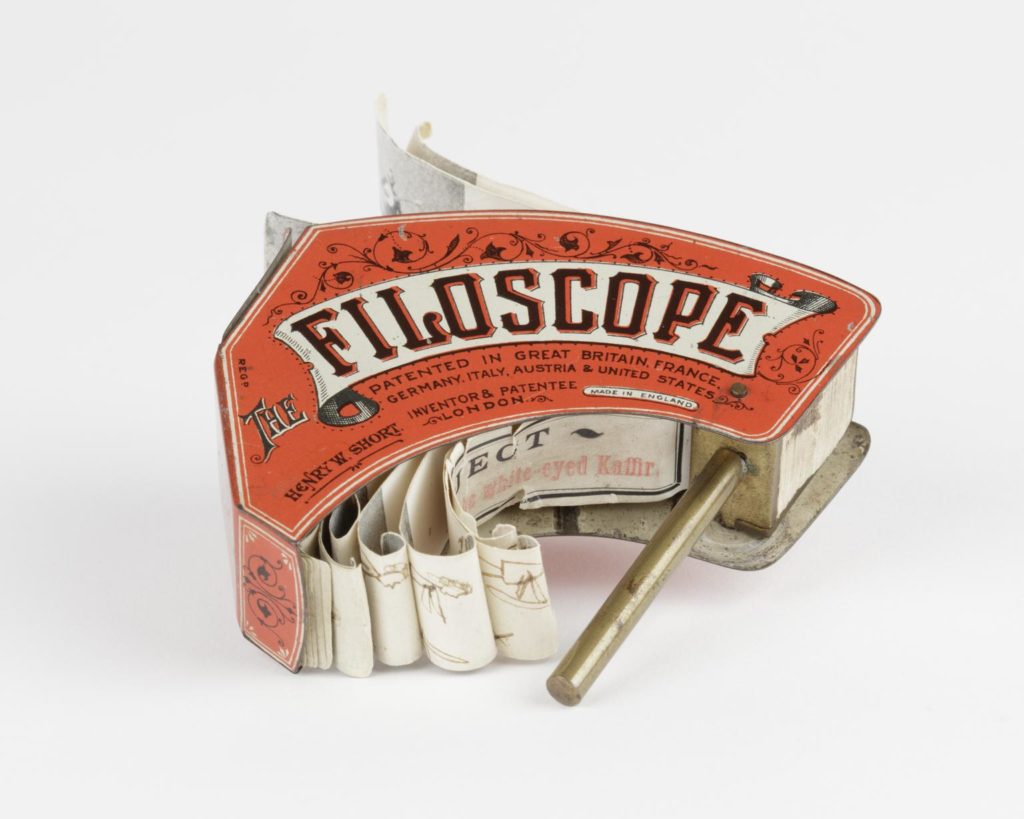 Filoscope flick book invented by Henry W Short, showing a section of Robert Paul’s 1898 film Chirgwin in His Humorous Business © The Board of Trustees of the Science Museum.

The exhibition also explores how the turn of the century was a heyday of innovation and entrepreneurship and reveals some of the other personalities of the time.

“You have to remember these were young Victorian entrepreneurs working within the framework of the industrial Revolution,” says Booth, “There was lots of opportunity for people who were jostling for position and trying to get ahead of everybody else and make money by pushing the technology forward to provide new forms of entertainment for people.”

People like Louis LePrince who was a Frenchman working in Leeds who built his cine-camera in 1888, which is in the collection, and the Riley Brothers who established their Magic Lantern business in Bradford in the nineteenth century, a precursor to the technology pioneered by Paul, a forgotten pioneer at the vanguard of the British-led film revolution in the mid-1890s.

The exhibition has been co-curated with Professor Ian Christie, a renowned film historian and Professor of Film and Media History at Birkbeck University of London. Christie has worked with artist ILYA to produce a graphic novel telling Paul’s story. His reference book on the subject is also due to be published later this year, titled Robert Paul and the Origins of British Cinema.

The Forgotten Showman: How Robert Paul Invented British Cinema is at the National Science and Media Museum from November 22 2019 – March 29 2020. Entry is free.

At the National Science and Media Museum, we explore the science and culture of light and sound technologies and their impact on our lives. We aim to inspire the scientists and engineers of the future to see more, hear more, think more and do more. Our galleries and exhibition spaces…

One comment on “Robert Paul: Remembering the forgotten father of British cinema”