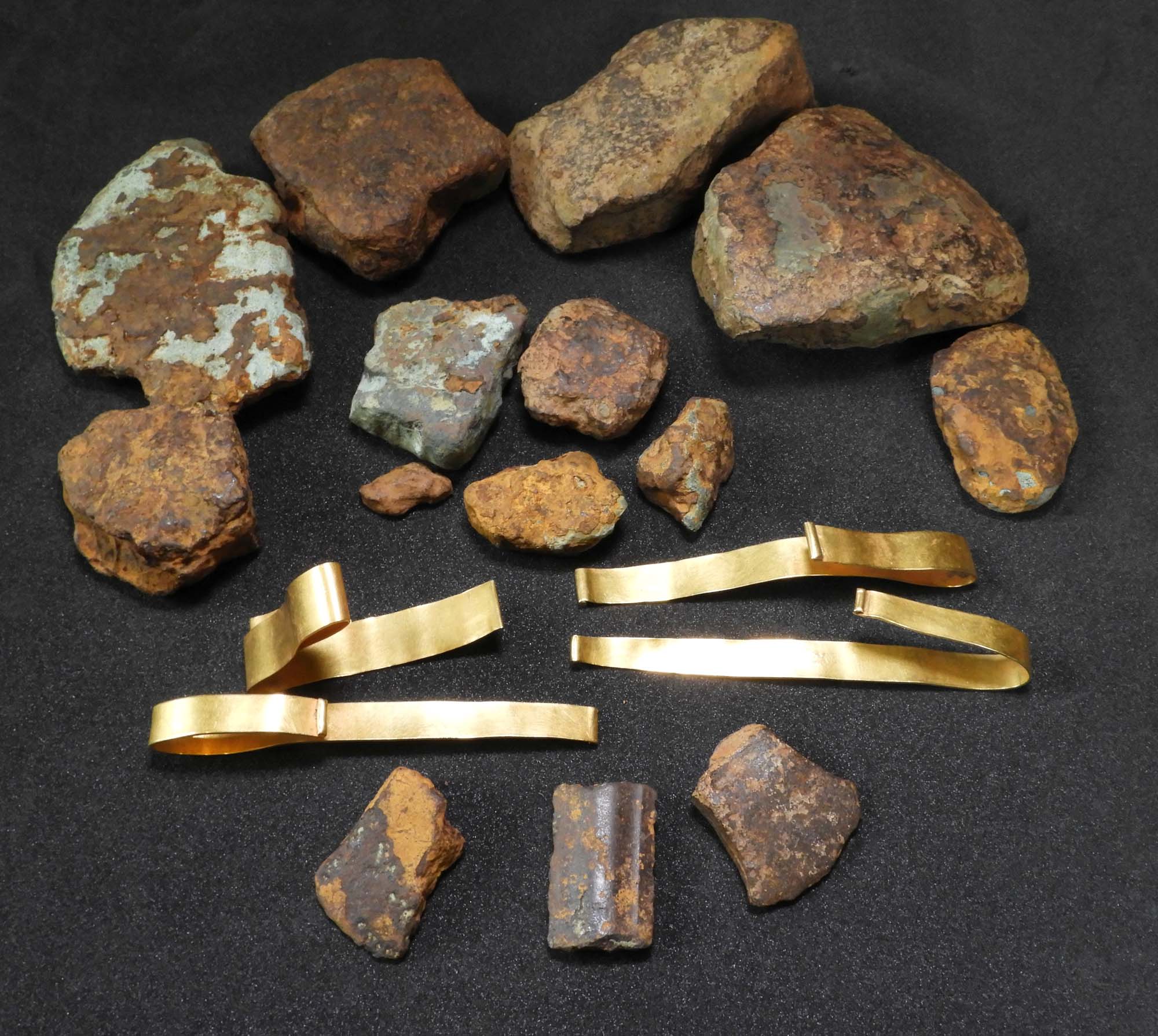 Exeter’s Royal Albert Memorial Museum has launched a fundraising campaign to buy, conserve and interpret an intriguing hoard of Bronze Age treasure found in a field in Dawlish

The Dawlish Hoard was discovered in 2017 by metal-detectorists from the East Devon Metal Detecting Club in a boggy field near Dawlish where it had lain buried for about 3,000 years, since the late Bronze Age.

The four folded gold bracelets, seven fragments of bronze ingot together with the two fragments of axe and a section of bronze sword seems to be a combination unique to the British Bronze Age in the west and the Royal Albert Memorial Museum (RAMM) in Exeter has launched crowd funding campaign to try and raise the £12,000 needed to buy, conserve and interpret the treasure.

Similar gold bracelets have been found in Colaton Raleigh in East Devon and in Tisbury near Salisbury. The bracelets were deliberately folded up and the ingots and weapons purposefully broken. Archaeologists don’t know why but this seems to have been relatively common practice in the south west.

“It’s all deliberately broken,” says RAMM Assistant Curator, Tom Cadbury, “and I would say that that’s the norm. For some reason these people deposit significant amounts of valuable metalwork in a broken state. But why do you bury broken things? Why would you bury this valuable stuff? 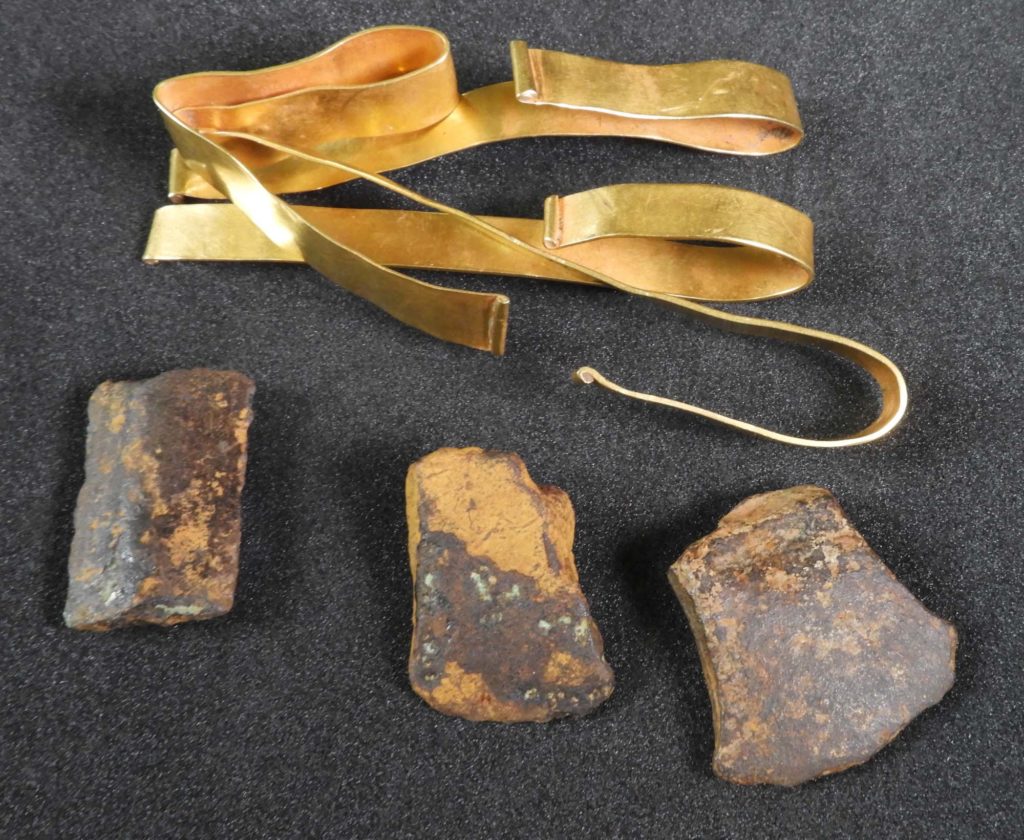 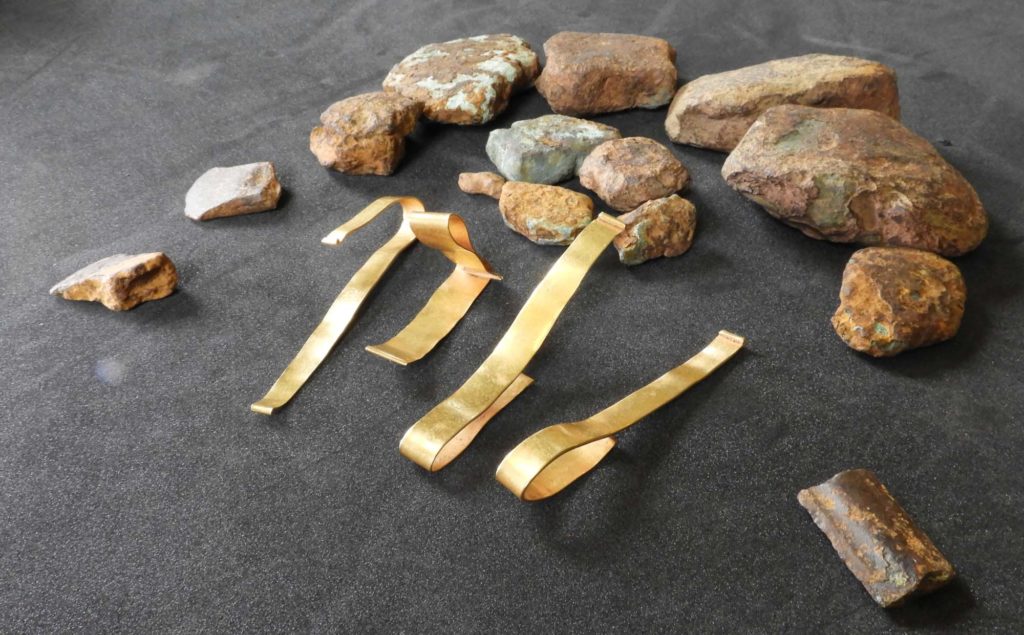 “The prosaic explanation might be that it’s kind of scrap, this stuff is broken down so it’s easy to put in the melting pot, and you just store valuable things in that way. But why would you go out to a boggy part of Devon and store it in a bog; it doesn’t hold true to me at all.”

Interestingly, Dawlish isn’t known as a location for Bronze Age barrows or settlements.

“I suspect this stuff was transported a distance,” adds Cadbury, “and I think these were what I would describe as ‘ritually killed’. So you’re killing the power of that object. That power may come from its association with a person, maybe a powerful person, and maybe on their death or another big life event you need to disassociate the objects from the person. You do that by killing the objects, chopping them, bending them, whatever.”

The combination of jewellery and weaponry is also providing fuel for speculation. The bracelets are of a sort that has been found especially in the south west, but they’re also very small bracelets and look like they were associated with a woman or a child. The ingots and the weapons, meanwhile, are typically described as ‘male’ material culture.

“That just may be our lens – the fact that we’re interpreting it in a particular stereotypical way,” says Cadbury, “but they’ve not been found together before so there is a strange mixture going on here of male and female culture.” 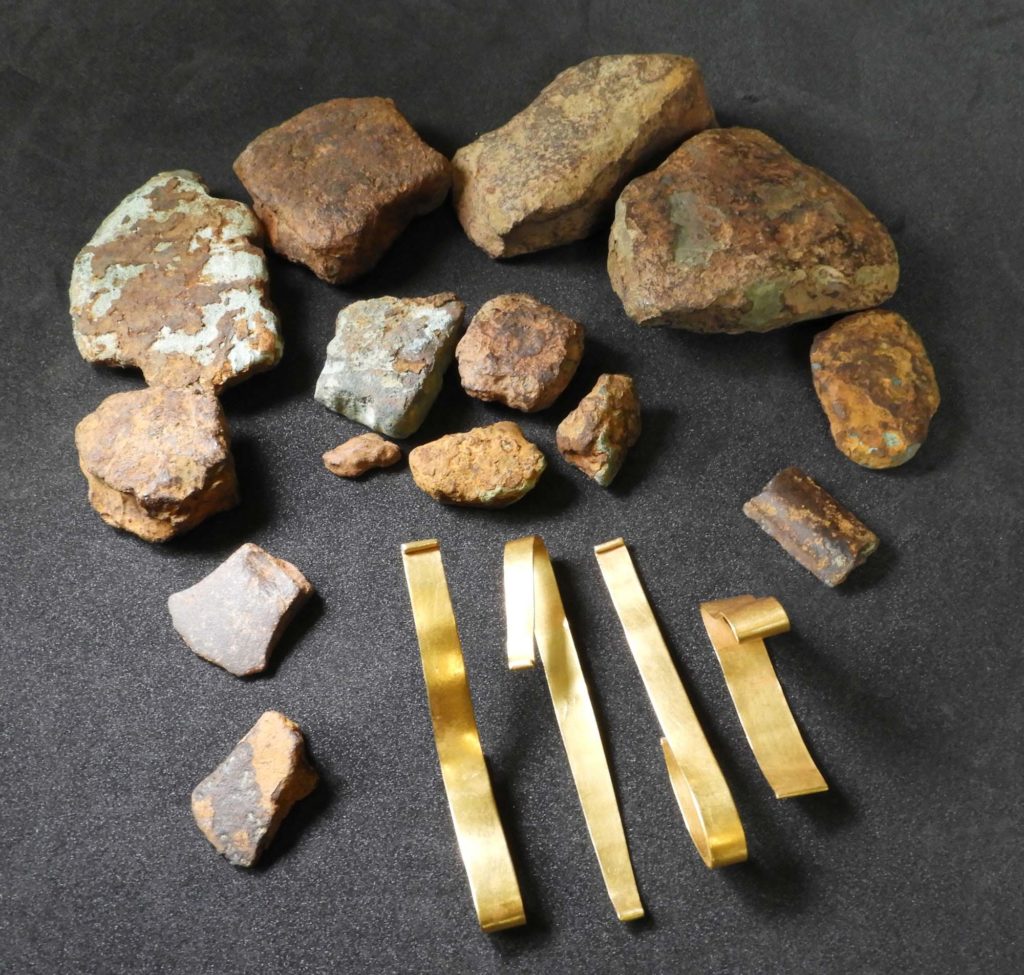 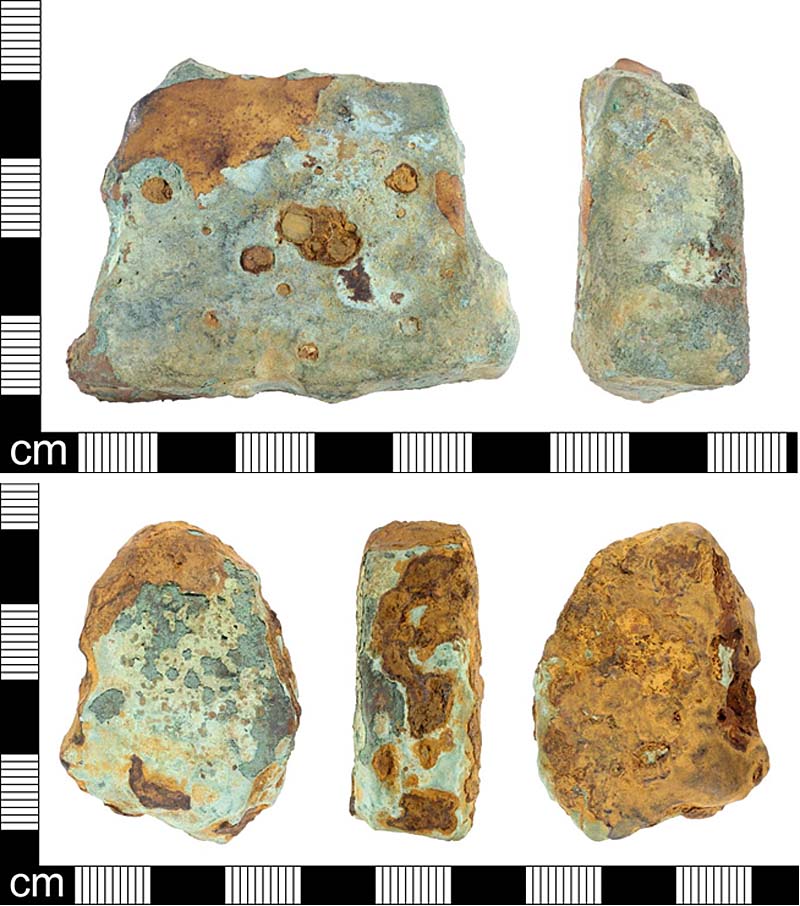 A closer look at the Bronze ingots. Courtesy RAMM

Many Bronze Age hoards were buried in watery places – this is also true of the Dawlish Hoard. Marshy places with dark pools of water could be seen as both a way into the underworld but also as a mirror to the skies (especially the stars).

Some experts believe that some late Bronze Age ritual deposits in this period were also buried in response to what today we would call climate change. Preserved pollen records, from places including Dartmoor, suggest that the climate had become colder and wetter with the likely result of crop failures. Perhaps Late Bronze Age communities responded to this change by making offerings to gods or ancestors.

As with most prehistoric archaeology, the find stirs up more questions and theories than it does answers

“We really only know about the Bronze Age and especially this late Bronze Age from two things; these hoards and the barrows – the burials,” says Cadbury. “And the hoards are far more common than the burials, the burials are rare. But the pollen evidence also shows there was a severe climactic deterioration, so you might say they were affected by climate change.

“I would say there’s quite a lot of possibility that in worsening climates, maybe failures of crops and harvests, and maybe even changes in sea level that were affecting these communities, that they were reacting to this by making offerings to ancestors, or to placate their gods.”

As with most prehistoric archaeology, the find stirs up more questions and theories than it does answers, but if RAMM can acquire the hoard it will add to a rich collection of Bronze Age finds – including another hoard of almost identical gold bracelets from Devon found at Colaton Raleigh. As well as some new interpretation at RAMM, uniting the hoard with more broken weapons, broken ingots and a piece of much earlier Bronze Age gold, if the fundraising is successful there will be some new interpretation at Dawlish Museum, which doesn’t have the facilities, security or insurance to house the new find.

“We are one of the few museums that has two hoards like this,” adds Cadbury, “so in a sense that gives us a significant amount more evidence to speculate and it also gives us evidence behind that speculation.” 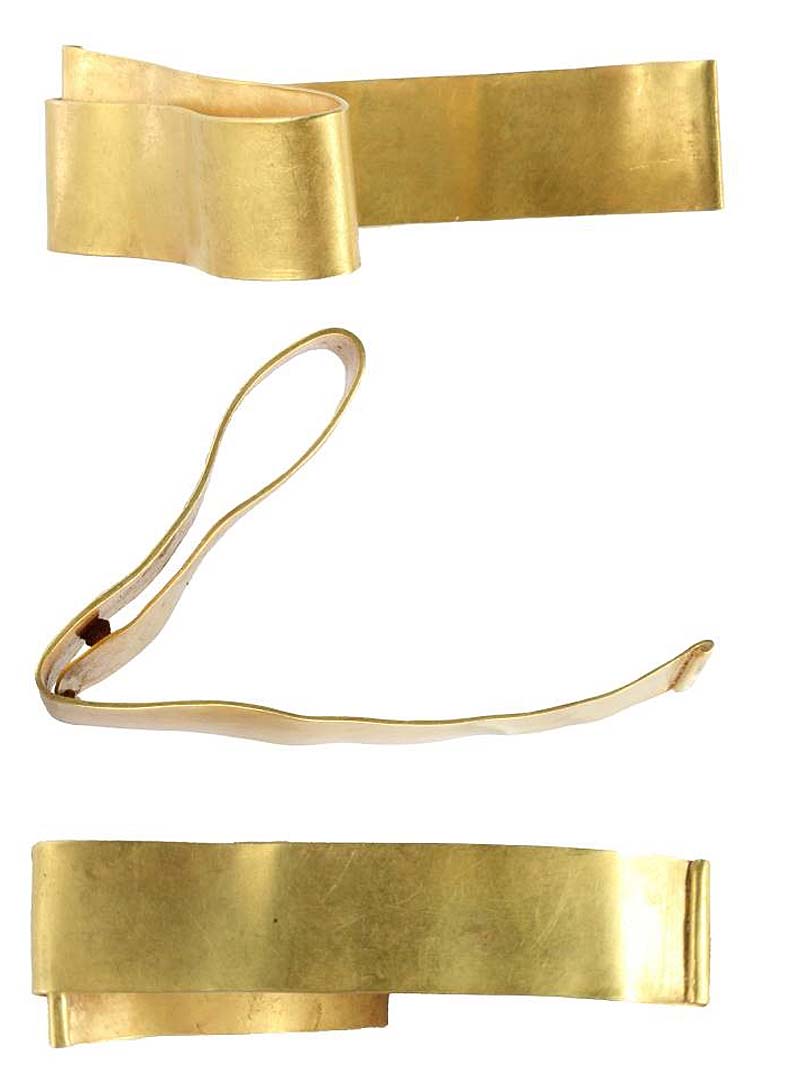 Views of the bracelet. Courtesy RAMM 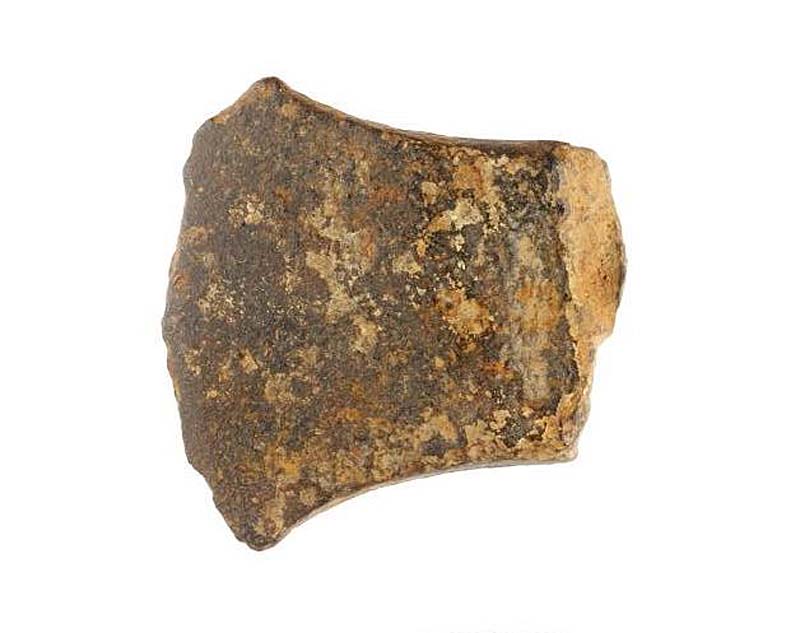 Head to the Museum’s donate page to help save the hoard for Devon.