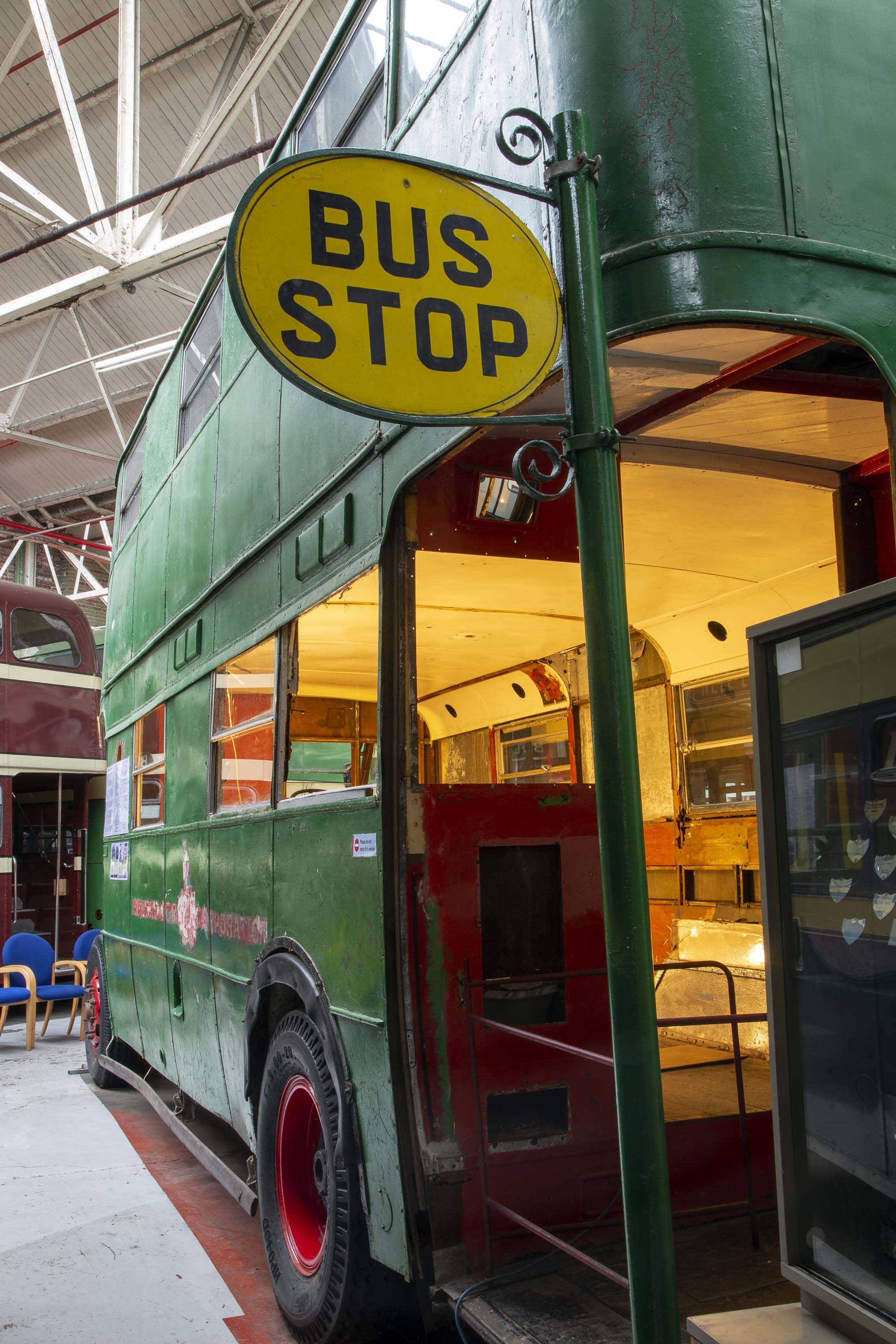 The back end of Crossley Bus 436 – at the museum. Courtesy Greater Manchester Transport Museum

Bus number 436 was one of hundreds of Crossley buses, built in Gorton by Crossley Motors, that during the 1930s and 1940s were everyday transport for thousands of Mancunians.

The Manchester Corporation Crossley double deckers, with their open platform at the rear, driver’s half cab and a conductor or ‘clippie’ taking the fares, ferried people right across the city to work, the pub, the cinema and beyond.

During the war years they worked hard to take workers to the factories around Manchester that were turning out everything from gas masks to Lancaster bombers.

But by the end of the 1940s the last of the Manchester Crossley double deckers (the Mancunians) had made its final journey to the scrapyard – except for one, bus number 436, which in 1950 became a static caravan in a field in Shropshire. 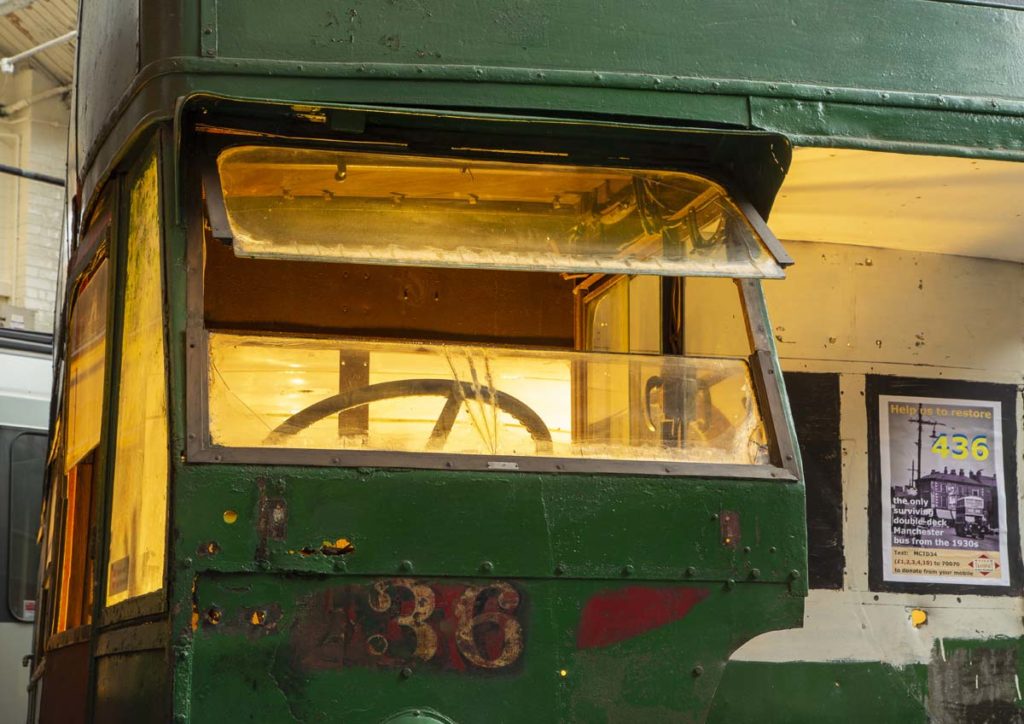 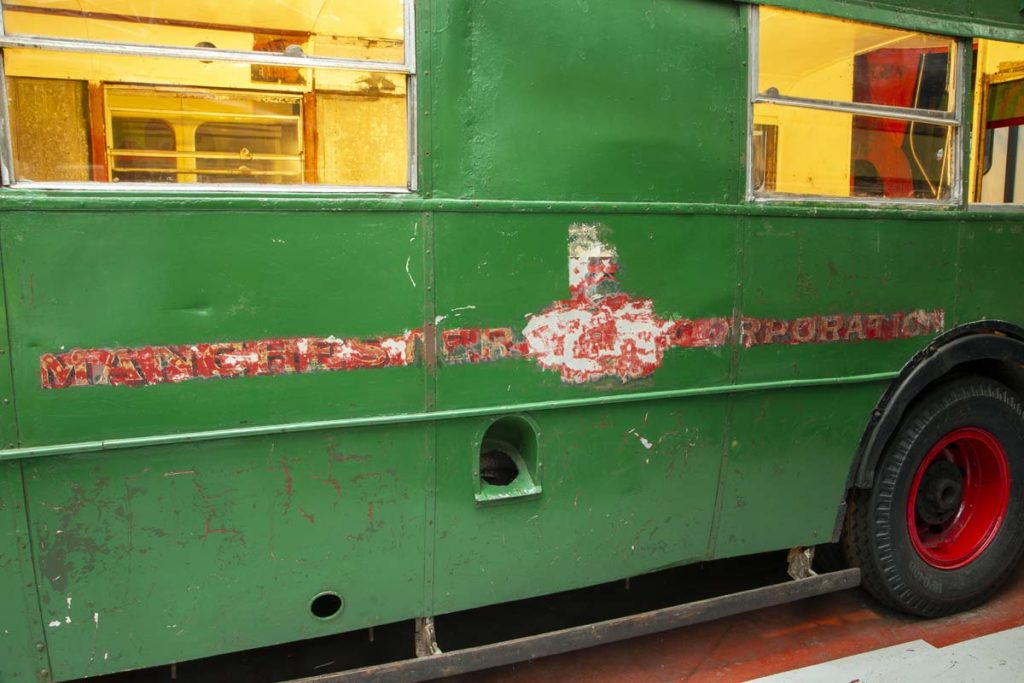 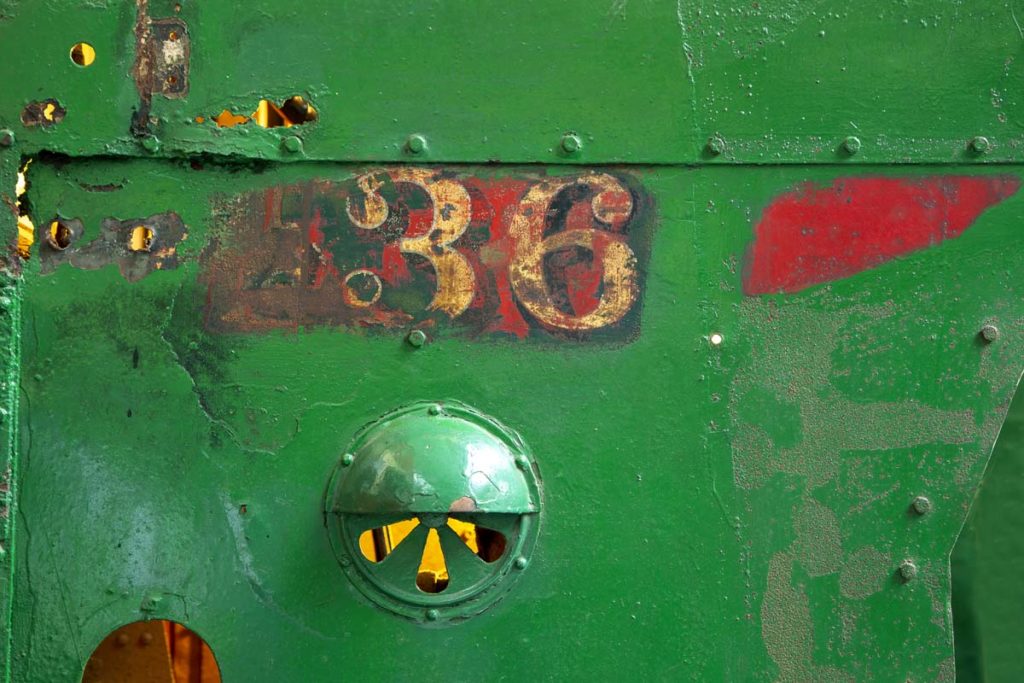 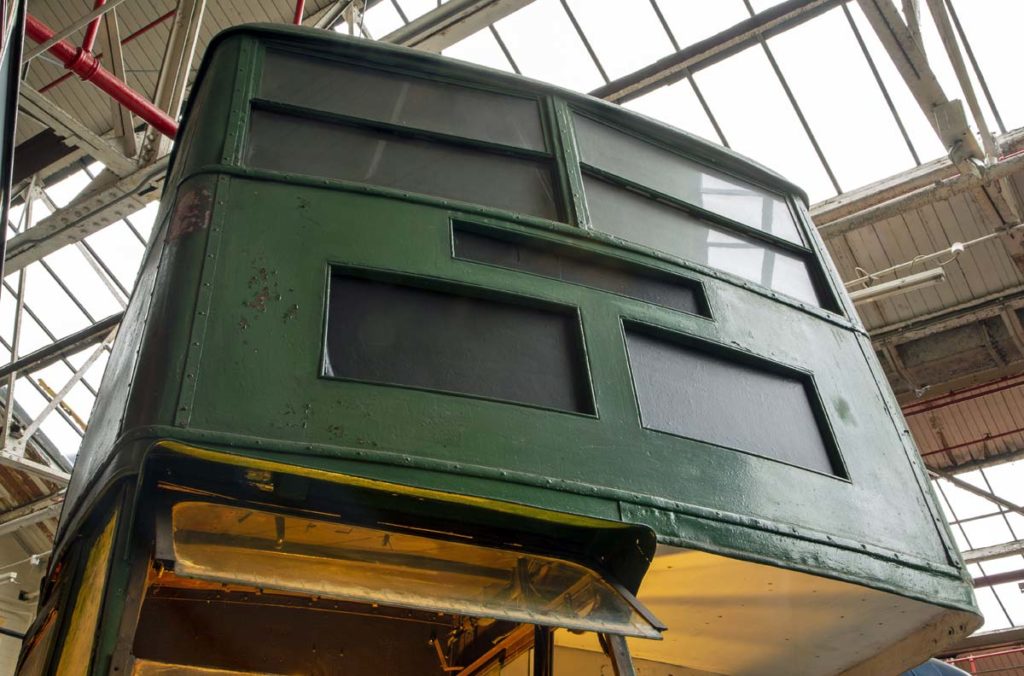 The bus, which records show was built in 1934, was eventually rescued from the scrap heap in the late 1970s and later arrived at the Museum in Boyle Street, Cheetham, complete with a sink, a walk-in wardrobe and a bedroom.

Now the painstaking work is starting to return it to showroom condition and, like many of the buses that reside at the museum that tells the the story of public road transport in Greater Manchester from 1824 to the present day, back on the road.

Museum volunteer Mike Shaw is one of the many helpers supporting the restoration work. “You see buses every day,” he says, “they’re not objects of desire or beauty, but they have a story to tell.

“This bus is the sole survivor of hundreds that you’d see all through the 1930s and 1940s, and we want to use it to help tell the story of 20th century Manchester.” 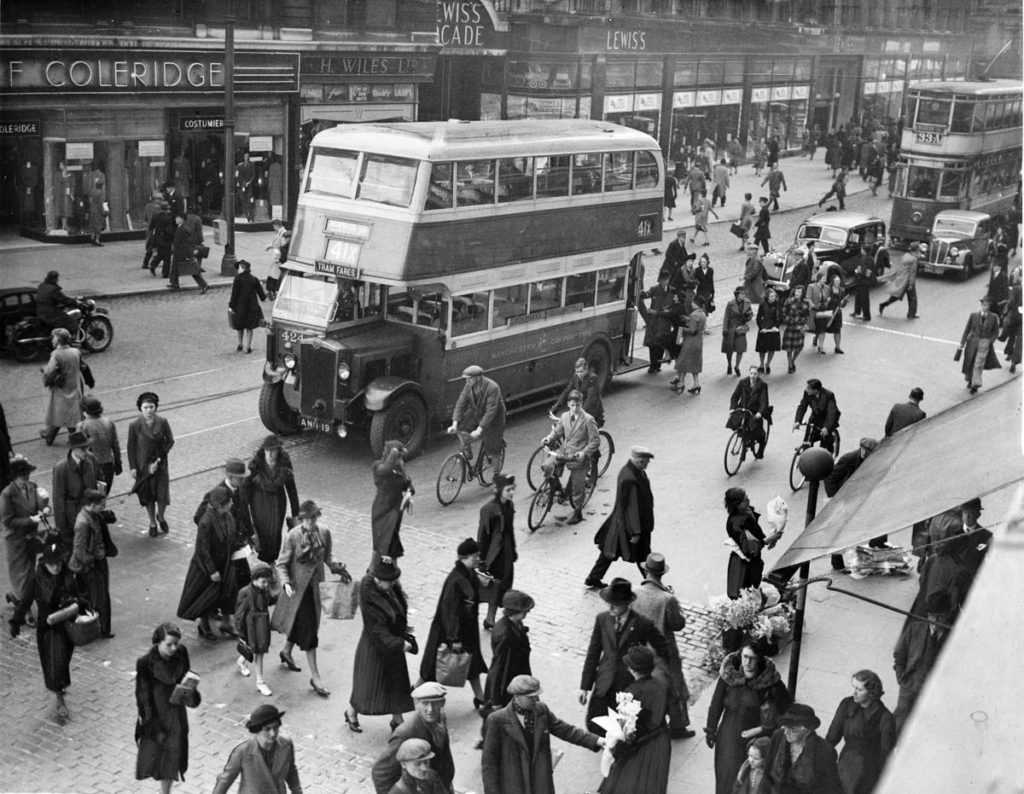 The bus works its way through Manchester’s Piccadilly in the 1940s. Courtesy Manchester Transport Museum. 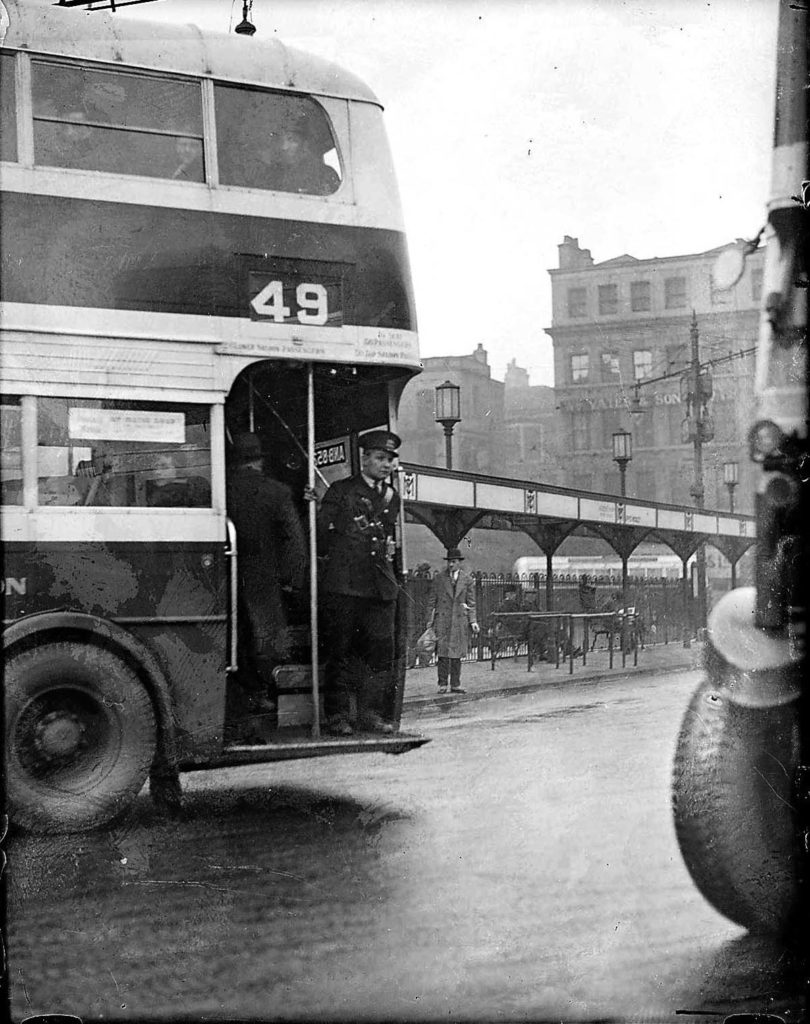 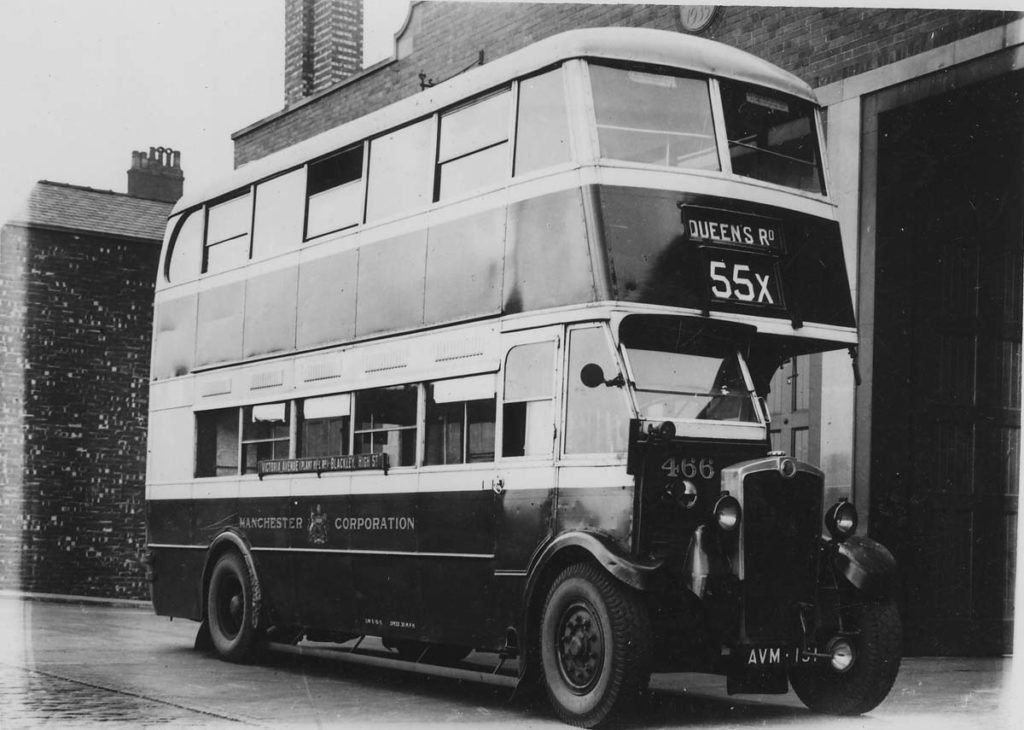 A 466 at Boyle Street in 1935. Courtesy Manchester Transport Museum. 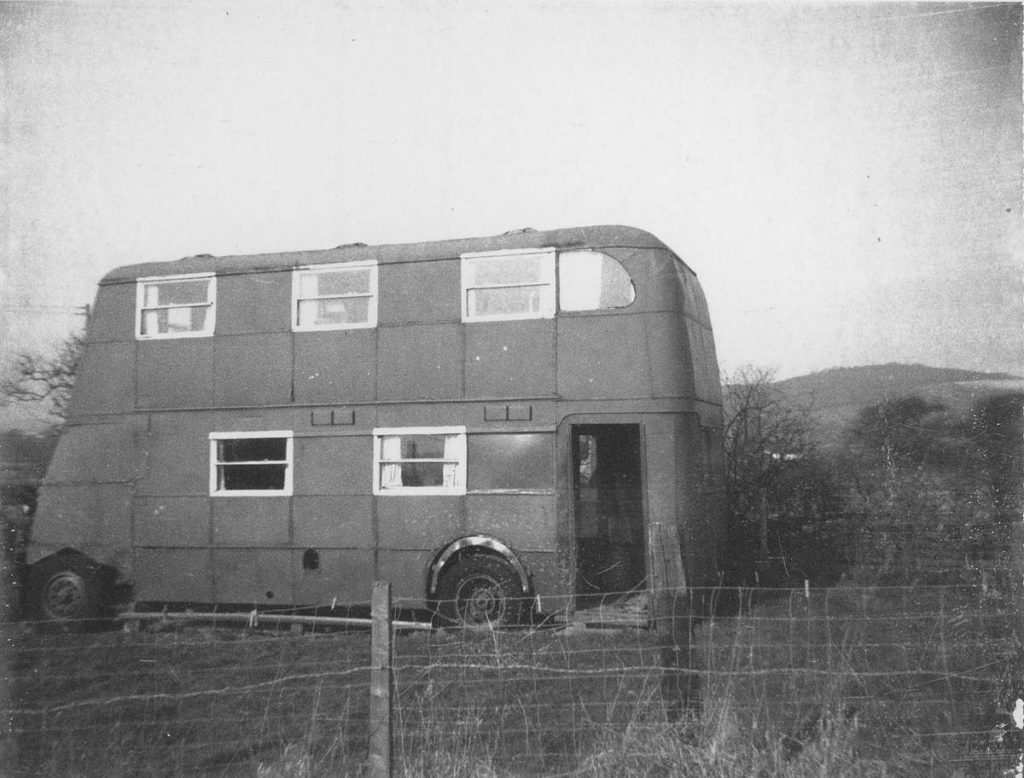 But with a restoration cost estimated at over £100,000 the museum needs to raise some money. “We’re a volunteer charity and we don’t have piles of cash,” adds Mike. “We can do a lot of the work ourselves but we’ll need specialist skills and materials.

“But it’ll be worth it to bring back something that’s not only unique but was made in Manchester, spent its life in Manchester and will go on display to the public in Manchester.”

Bus 436 has already revealed some of its Art Deco touches and tell-tale signs of its life in the city.

“It’s surprising how much of the original interior is still there,” says Mike, “with varnished wood and white-painted ceilings a bit like a 1930s parlour. And there’s even part of a period advert inside – promoting soap powder. Very useful for Monday wash days.” 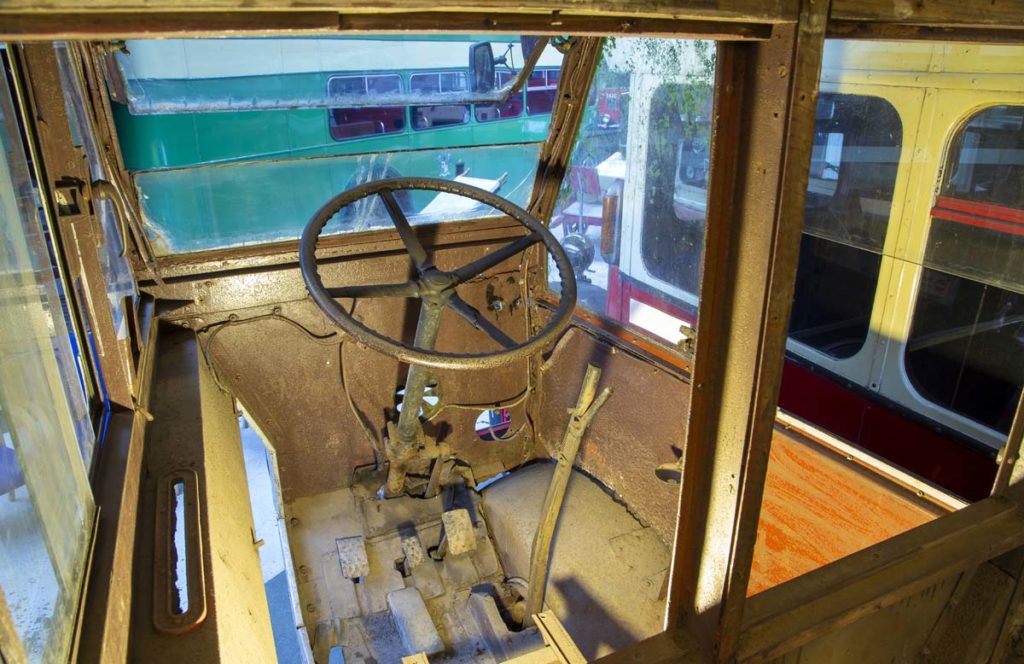 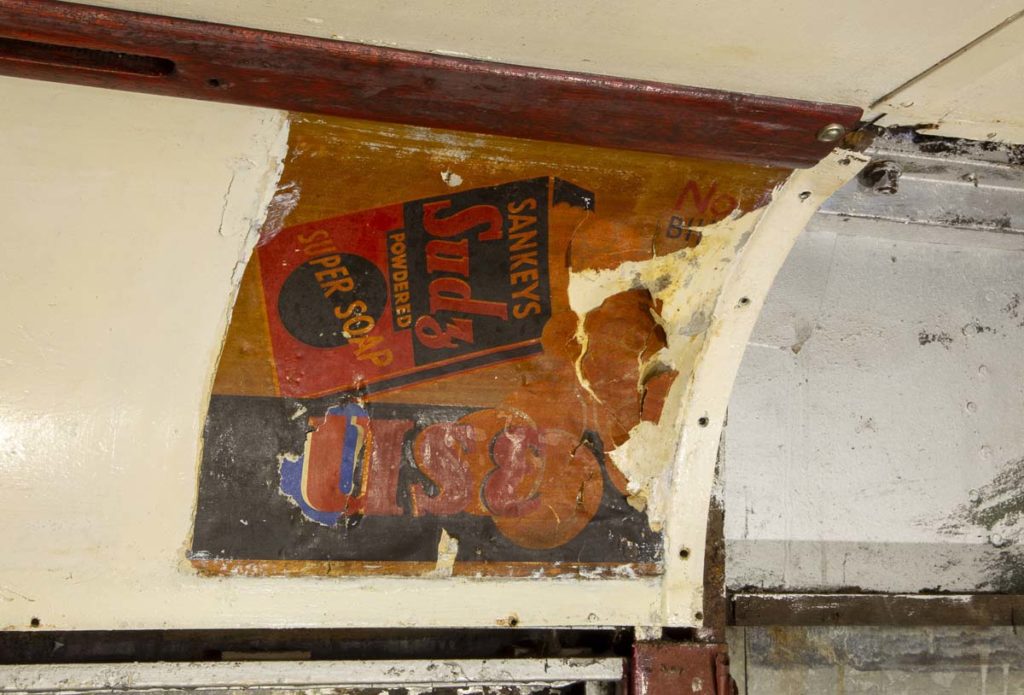 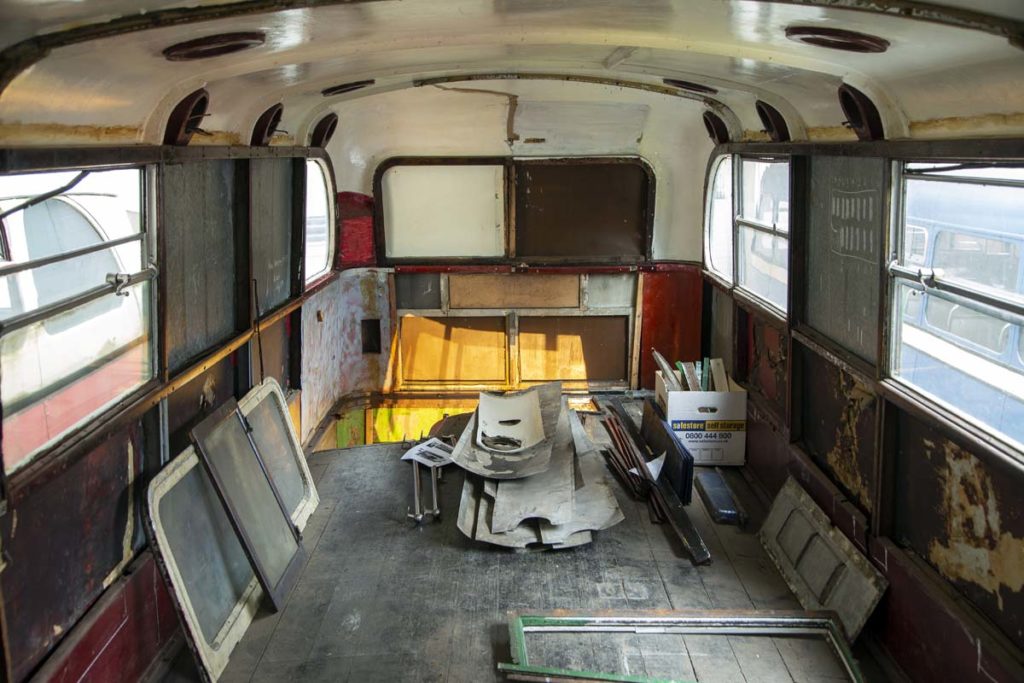 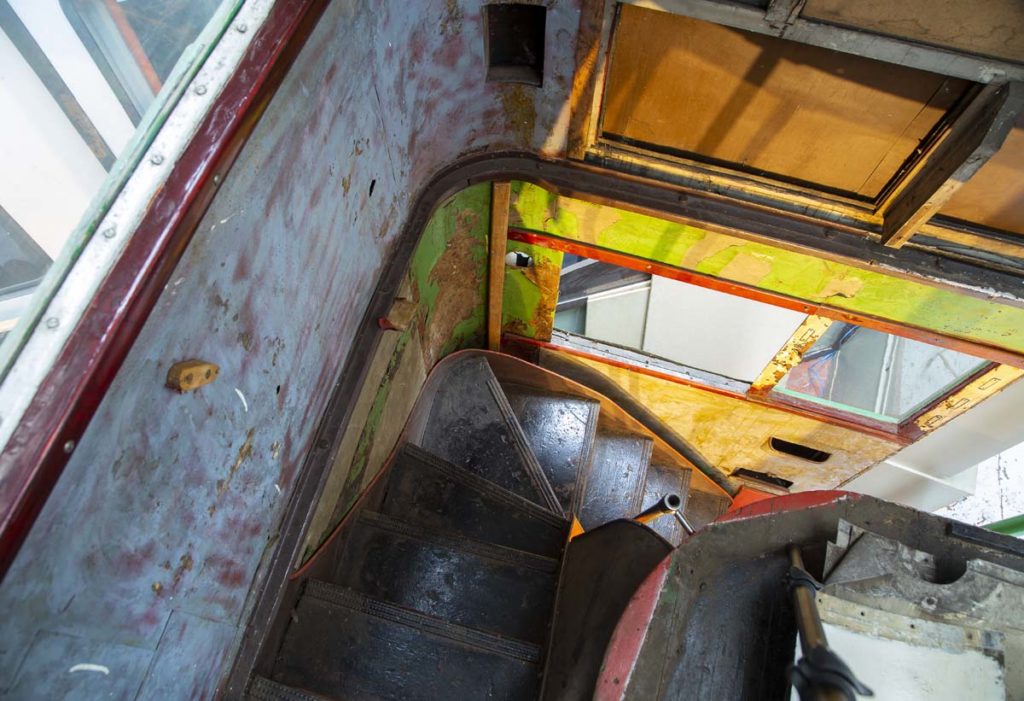 Underneath the many layers of household paint, museum craftsmen have also discovered ornate ‘Manchester Corporation’ lettering and a city crest, complete with the bees that are such a symbol of the city’s strength.

The Museum, which occupies a 1901 bus garage in a Grade II listed building, hopes to raise at least £100,000 to get bus 436 running again in a collection that spans over 100 years and includes everything from 1890s horse bus to a full size prototype Metrolink tram.

A £10,000 grant from the Peter Harrison Foundation has got the fundraising started. 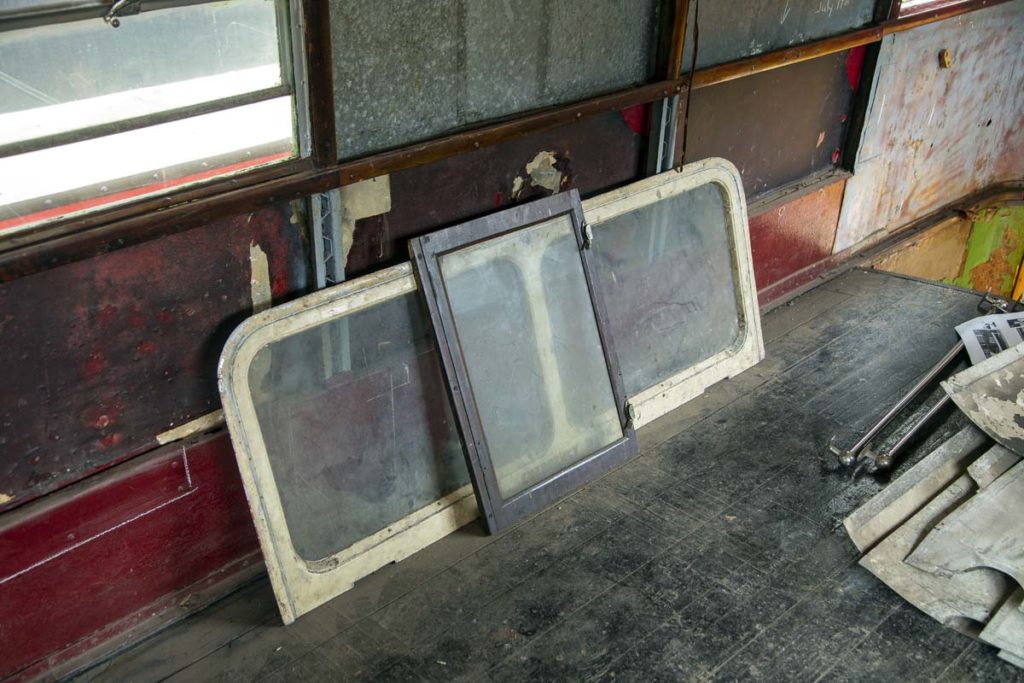 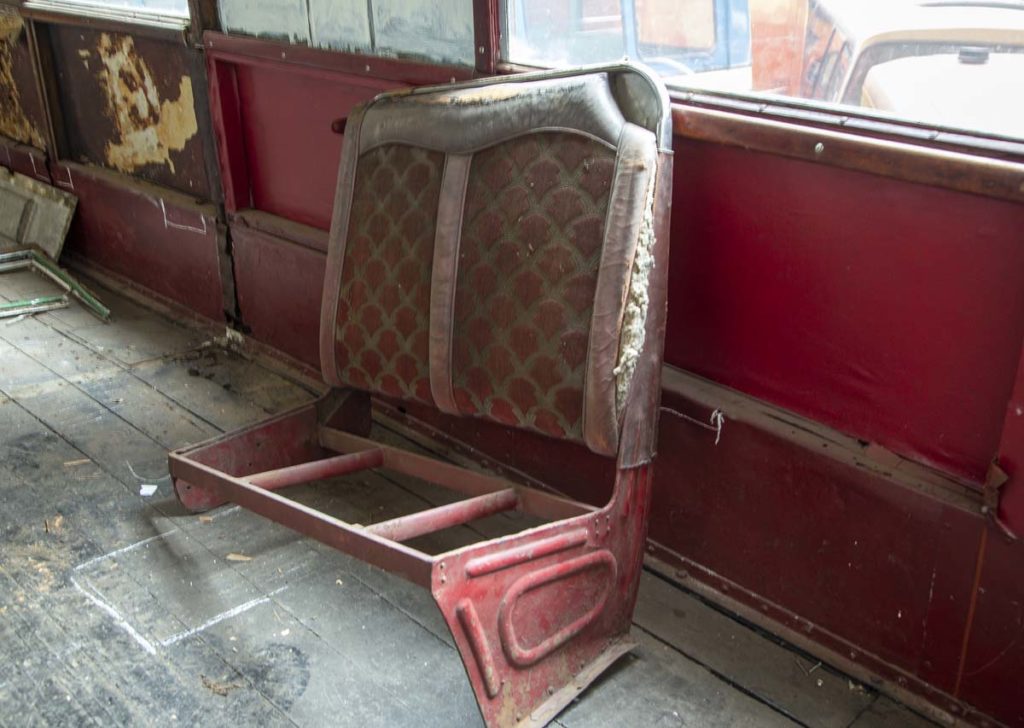 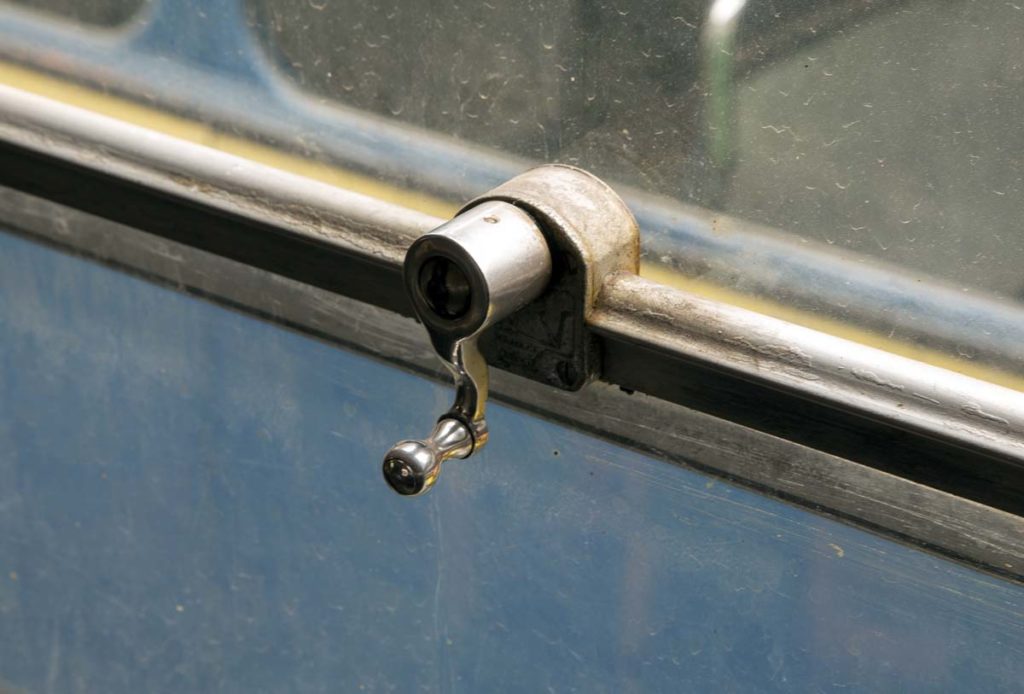 Help the museum volunteers restore Bus 436 back to its original state by donating at mydonate.bt.com/events/gmts436/93876.