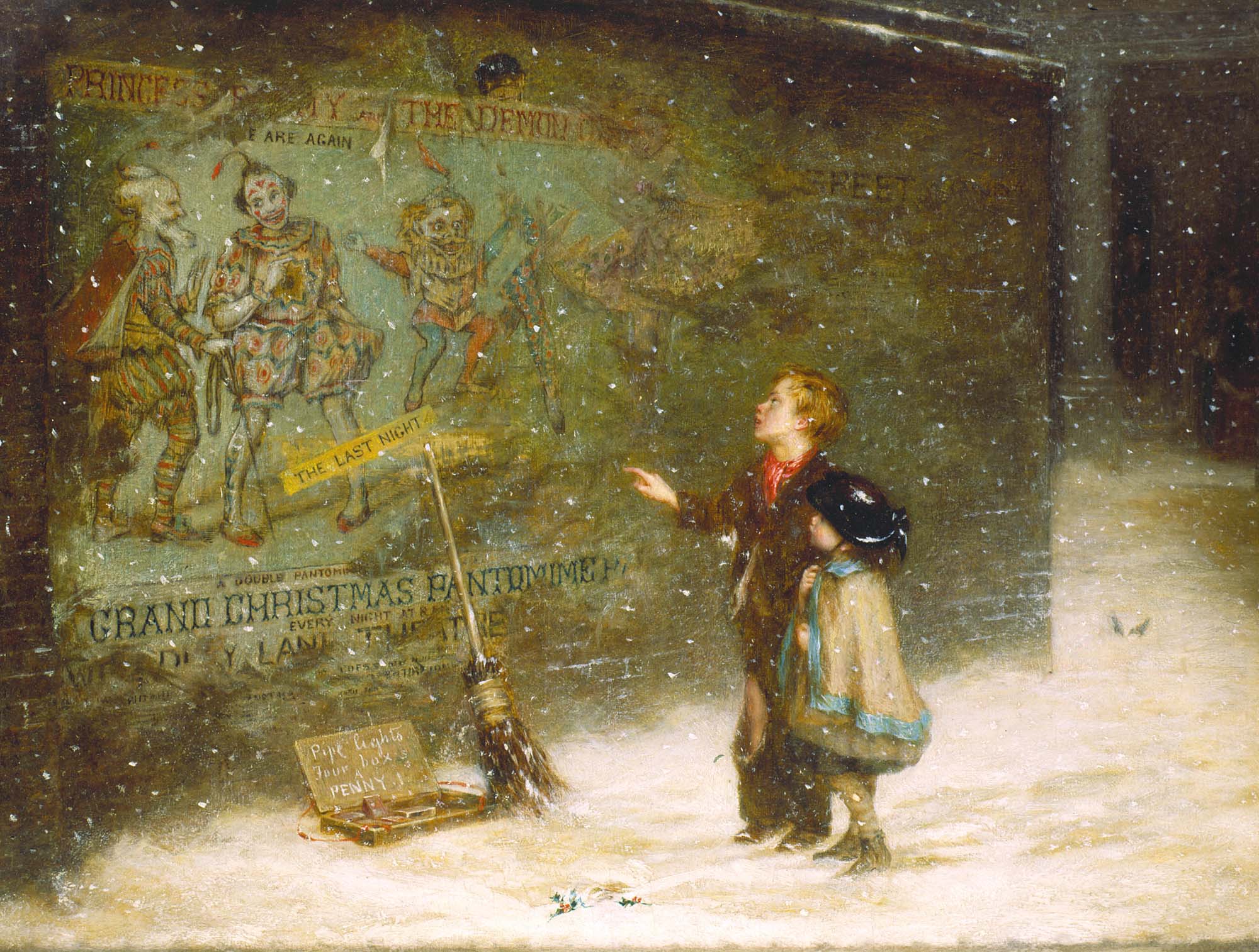 As the Guildhall Art gallery mines its collection of Victorian art for a major exhibition exploring depictions of children, we talk to curator Katherine Pearce about the ways the Victorians painted childhood

When it comes to Victorian depictions of children in paintings the works of John Everett Millais often spring to mind. In particular the former Pre-Raphaelite’s most commercial work, Bubbles, which seems to be the epitome of slushy Victoriana.

Yet to reduce Victorian depictions of childhood to the soap or chocolate box is to do the artists of the nineteenth century a disservice. The Victorian period saw a real sea change in the way artists captured children and childhood.

Set against a societal backdrop that was changing rapidly, the Guildhall Art Gallery is exploring how artists like Millais Augustus E. Mulready, James Clarke Hook and many others moved away from the stiff formality of society portraiture in which children were regarded almost as props of a wider tableaux, to more sympathetic depictions that chimed with the changing attitudes of the upper and middle classes.

“I think what drives Victorian artists in general is not so much sentimentalism, it’s actually emotionalism,” says exhibition curator Katherine Pearce. “They’re more interested in investigating feeling and not just for its own sake. 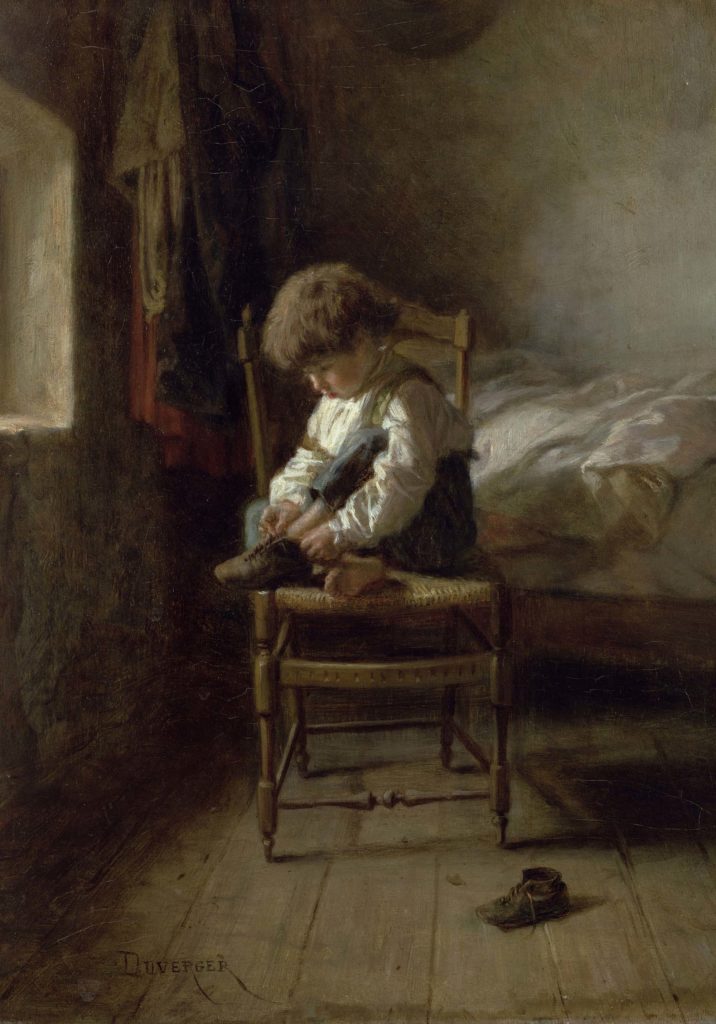 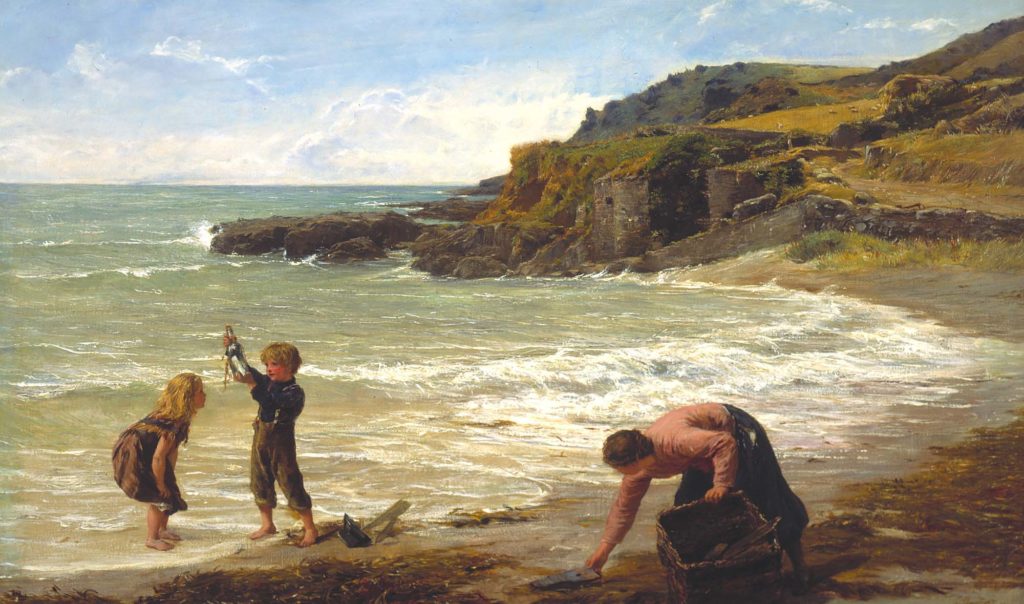 Up until the Victorian period says Pearce, children were largely depicted as “miniature adults”.

“It’s really only in the 19th century that children start being viewed more sympathetically, more as individuals with unique characteristics and that they require protection and a separate time and space to develop and grow.”

This was the time of the great social novels of Dickens and characters like Nicholas Nickleby, Oliver Twist and Pip from Great Expectations who became part of a developing new vision of childhood in which politicians and public alike took a renewed, benevolent and almost sentimental interest in their plight – and this was reflected in the paintings of the period.

“You absolutely see affection, love and fondness and a need to get to the heart of the individual child, “ says Pearce, “and not just portray them as little miniature versions of their parents or even as urchins in Dickensian terms. They are much more idiosyncratic than that.”

Charting this shift in artistic perception, the exhibition works as kind of visual narrative of a crucial point in history where, for the first time, children were actually listened to and society saw value in Britain’s youth. Until then, children were generally only painted as an extension of the family’s name and patriarch, but they were now being shown playing amongst themselves, and with their families.

“Artists were aware of who their main audience for these paintings are,” adds Pearce, “it is a largely middle class one, which has its issues, but at the same time they’re representing on canvas images of children that parents would recognise from their own homes.” 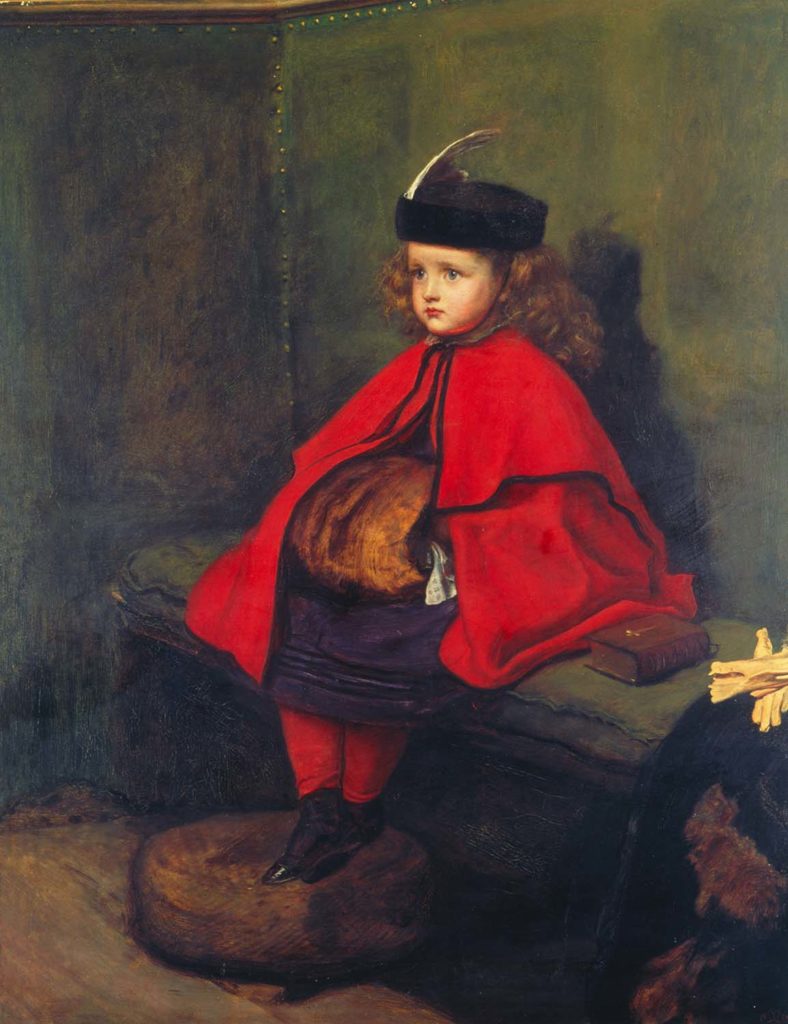 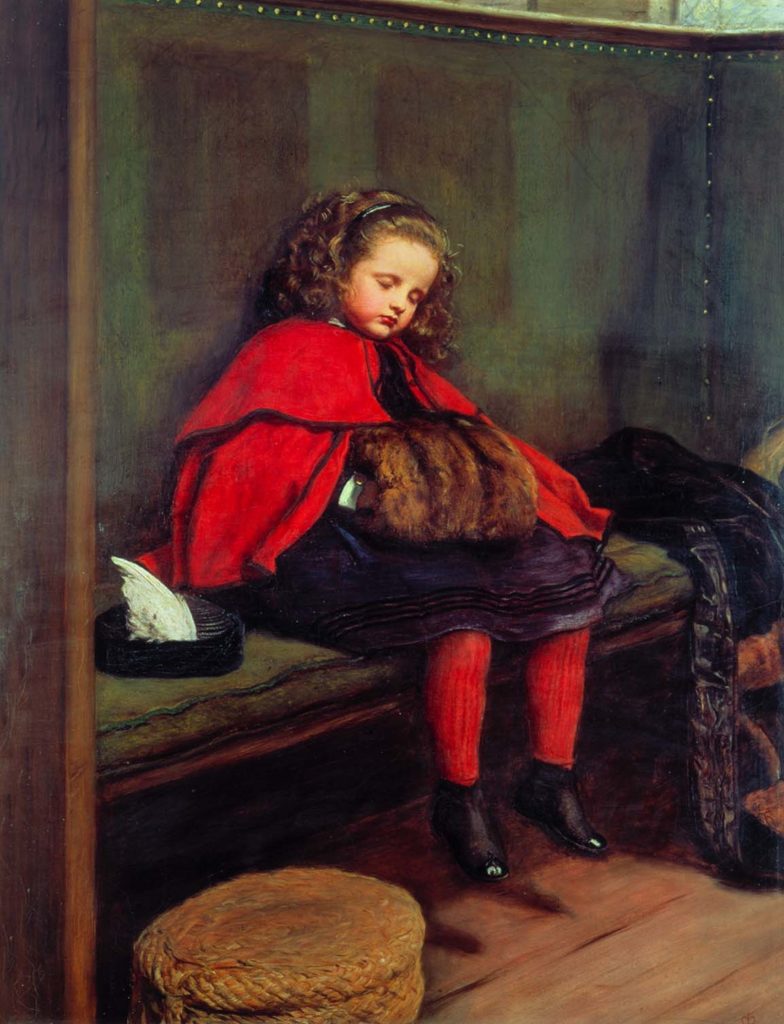 This is where Millais’ paintings of children or a painting like Briton Riviere’s Sympathy, which is on loan from Tate come into their own. The latter features a girl who looks like she’s been thoroughly told off, sitting on the naughty step as a dog looks sympathetically at her. Syrupy? Perhaps. But it’s also a very sensitive and realistic image that Victorians identified with.

But the Victorian period was still a brutal one, as evidenced by the slew of reforms that were passed to improve the lot of children who were being exploited on a large scale by industry, commerce and worse.

1842 saw the Mines Act, which banned employment underground of boys under the age of ten – and all women and girls. The 1848 Public Health Act established a central board of health in response to the cholera epidemic and in 1851 Henry Mayhew published his London Labour and the London Poor, after interviewing children working in the streets.

In 1870 Dr Thomas Barnardo opened his East End London home to take vulnerable boys off the street, essentially founding the charity now known as Barnardo’s and in parliament the 1880 Elementary Education Act made schooling compulsory until the age of 10. In 1891 the NSPCC was founded by Liverpool businessman, Thomas Agnew.

“It’s a gradual progression through the century – one of continual reform and legislative change,” says Pearce. “As early as the Mines Act in the 1840s, the report sent to Parliament detailing the little boys’ accounts of their work down the mines was accompanied by drawings and illustrations. So this is a period in which children’s voices and images are being proliferated in a much more significant way than they ever were before. That generates a lot of sympathy and more understanding.”

Against this backdrop of reform and changing perceptions, Queen Victoria herself played a significant role in the way Victorians viewed childhood. In the first 14 years of her 61-year reign, she gave birth to nine children. With so many of her young offspring in the public eye, contrary to some modern perceptions of her, the monarch set family values at the heart of her tenure as queen.

Her lifestyle of motherhood inspired the middle and upper classes to seek their own domestic happiness, which caused many to look at the plight of the young children who were forced to work in the dangerous and lonely conditions of the factories and mines.

The historic Guildhall Art Gallery originally opened in 1886 and is home to City of London’s art collection, which is still owned and managed by the City of London Corporation. Unashamedly rich in Victorian art – ranging from Pre-Raphaelites to depictions London’s colourful past – it includes many depictions of children, from the urban poor to rural children in the landscape. But are these depictions of children just sentimental or are do they mark a sea change in artistic perceptions?

“We’re missing a trick if you write off Victorian art,” says Pearce, “it was a culture that was really, really aware of the difference between their ideals and their realities.

“The notion of Victorian hypocrisy that was painted quite broadly in the early 20th century by modernists, who were desperate to smash something so they could rebuild it and get away from that Victorian ethos and aesthetics is understandable.

“But the point now is we’re a culture that is very aware of the difference between our ideals and our realities and that includes attitudes towards children. So I think it’s absolutely worth looking at the Victorian art that was collected as contemporary art at the time, which is what our collection is.” 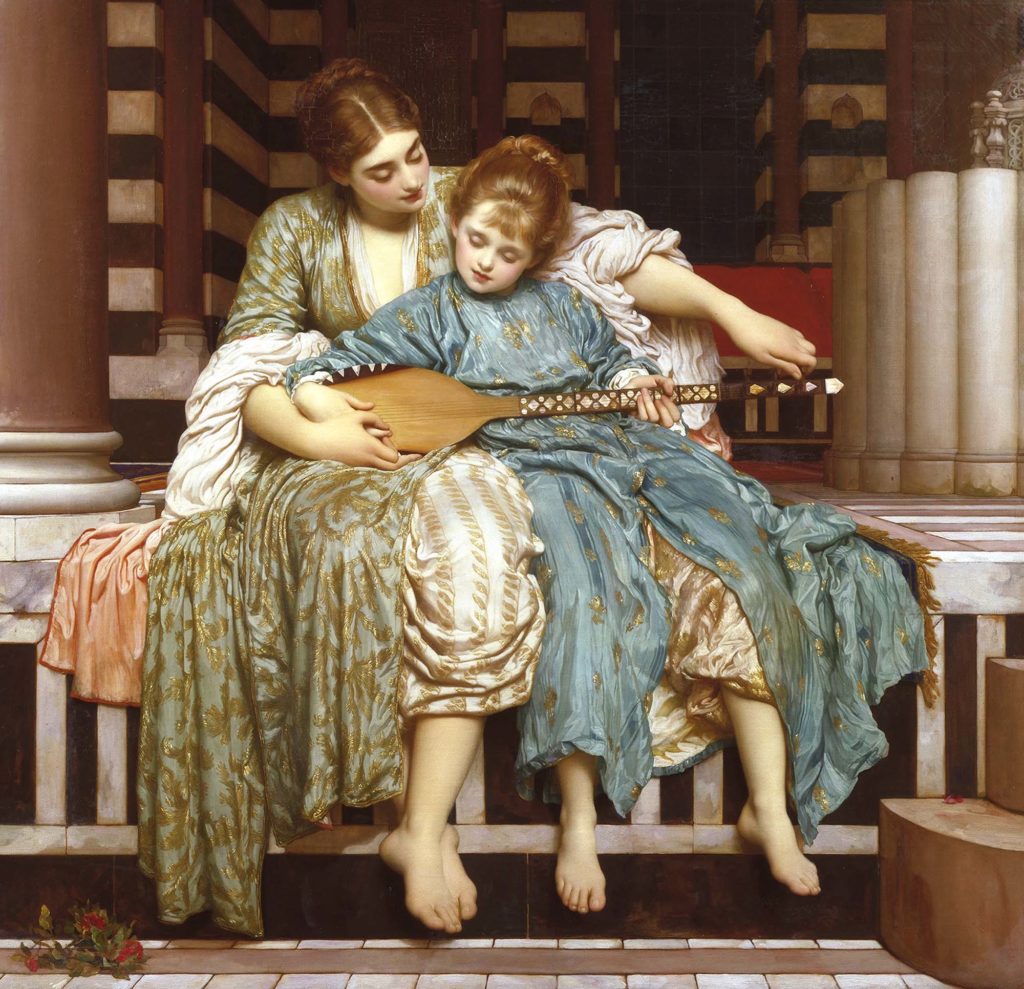 In that sense the Guildhall collection offers a snapshot of a society that Pearce says “wanted to investigate itself and that wasn’t content to think that it’s got everything right”.

“As well as the hard-fought reforming agenda there was a desire to solve problems and get to the heart of what made people tick and what made life worth living,” she says, “and that is entirely rooted in a very genuine need to re-establish human and emotional connections in a world that was moving quicker than it had ever moved before.”

If that’s the case, Victorians may be closer to us than we think – especially as some of us struggle to keep abreast of progress, making us turn to the past for comfort. Perhaps like some of us, the Victorians found in these paintings of children a kind of comfort or an innocence  that harked back to a bygone era that never really existed?

“It was perhaps a way of leavening that,” admits Pearce, “but I would say always look to see what the gap is between ideals and reality, the Victorians are the masters of that.”

Whatever your view of Victorian art, the Victorian art world’s artistic interpretation of childhood has something in it that still resonates across the centuries.

Seen & Heard: Victorian Children in the Frame is at the Guildhall Art Gallery London from November 23 2018 to April 28 2019.

Discover the art collection of the City of London Corporation and visit Guildhall Yard, a tranquil and historic square in the middle of the City. The Gallery was established in 1886 as, 'a Collection of Art Treasures worthy of the capital city'. See works dating from 1670 to the present,…

One comment on “Seen and Heard: How Victorian artists rescued childhood”