These objects, given to museums for safekeeping, have their own mysterious tales to tell. Read on if you dare…

Not actually a mummy, but the mummy-board (or coffin lid) of an unknown high-status woman from the 21st or 22nd dynasty (950-900BC), the British Museum’s Unlucky Mummy has earned quite the reputation for causing destruction through its ancient curse.

The mysterious mummy was found at Thebes in the late 1800s and tales of its curse start soon after that. It’s said that of the four young Englishmen who bought it, two died in shooting incidents and two died in poverty. A string of illnesses, accidents and deaths following this are said to be attributed to the mummy.

One of the most astonishing rumours surrounding the mummy’s curse is that it caused the sinking of the Titanic with the loss of more than 1500 lives. One of the victims on the Titanic was journalist William Thomas Stead, who was one of the first to pen articles about the mummy’s curse. Survivors from the disaster recall Stead telling stories of the ominous artefact over dinner, and as the mummy’s sinister reputation grew people even began to believe that its presence on board caused the disaster. This is of course entirely false; the shipping records show that no mummy was on board the ship and the mummy never left the safety of the museum until 1990. 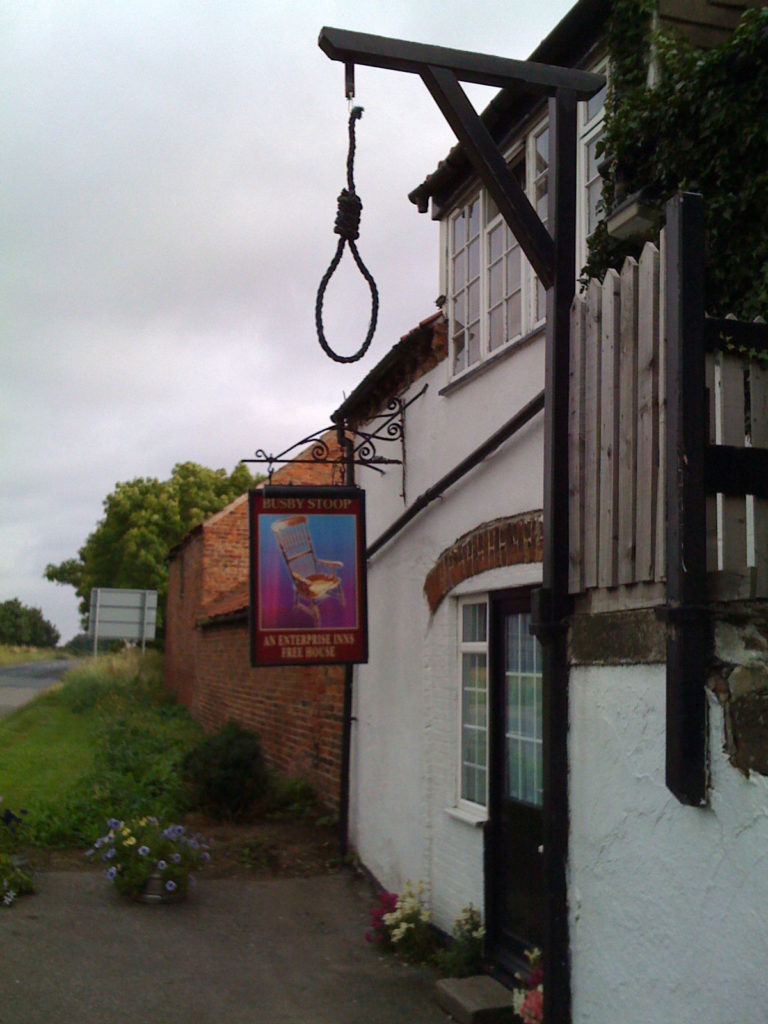 The Busby Stoop Inn in 2008. Built on the site of the gibbet which held the remains of murderer Thomas Busby, the inn was associated with a series of strange and fatal occurrences. It is now an Indian restaurant. © James West (CC BY-SA 2.0)

Busby was arrested at the local inn and sentenced to death by hanging. According to legend he laid a curse on his favourite chair at the inn, saying death would come soon to anyone who dared sit in his seat. After his execution his remains were hung in a gibbet from a stoop (post), at Sandhutton crossroads – now the location of the Busby Stoop Inn.

The inn and surrounding area were said to be haunted by Busby’s ghost, but one chair there in particular had developed a rather sinister reputation following a string of tragic accidents. Second World War airmen who sat in the chair were said to never return from their missions, and the chair is also linked to several road accidents and fatal illnesses.

In 1978 the inn’s landlord of the inn removed the chair to Thirsk Museum, just a few miles down the road. The chair is now suspended high above ground at the museum, to ensure that no unassuming soul can ever fall foul of its curse again. It’s been hung there, unmoved, for 40 years. 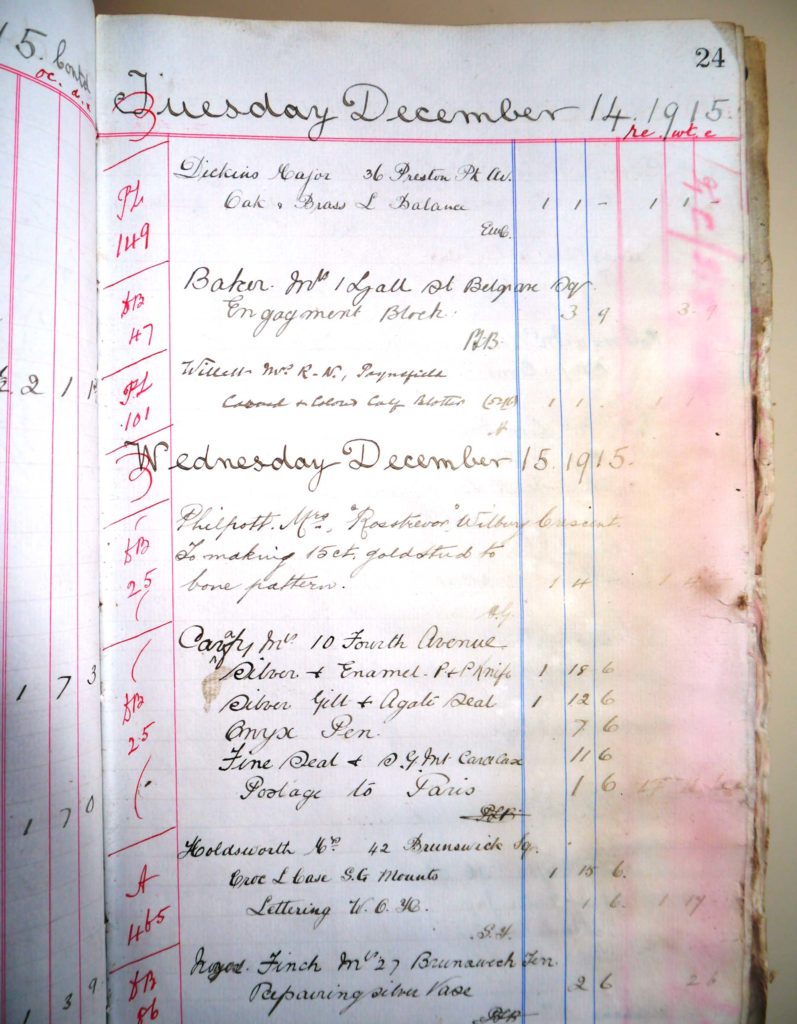 Inside the haunted book. © Royal Pavilion and Museums, Brighton & Hove

We’ve written about the creepy story of this ledger before. The supposedly haunted book was given to Brighton’s very own haunted house, Preston Manor, after the Kent family who owned it claimed it caused them to be plagued by ghostly visitors and spectral visions.

The ledger, which dates from the First World War, was discovered bricked up in a shop wall in Brighton by a worker when he was demolishing the building in 1988. He took the ledger home and soon after he and his daughter began experiencing visions of men, women and children, and a solider with a horse. The daughter was told by one of the spirits that the book must be returned to Brighton for the centenary of its first entry – in December 1915.

The terrified family delivered it to Preston Manor, which is known for its paranormal occurrences and spiritual events. A medium visiting the house inspected the book and confirmed that they could sense “bad things” emanating from it. 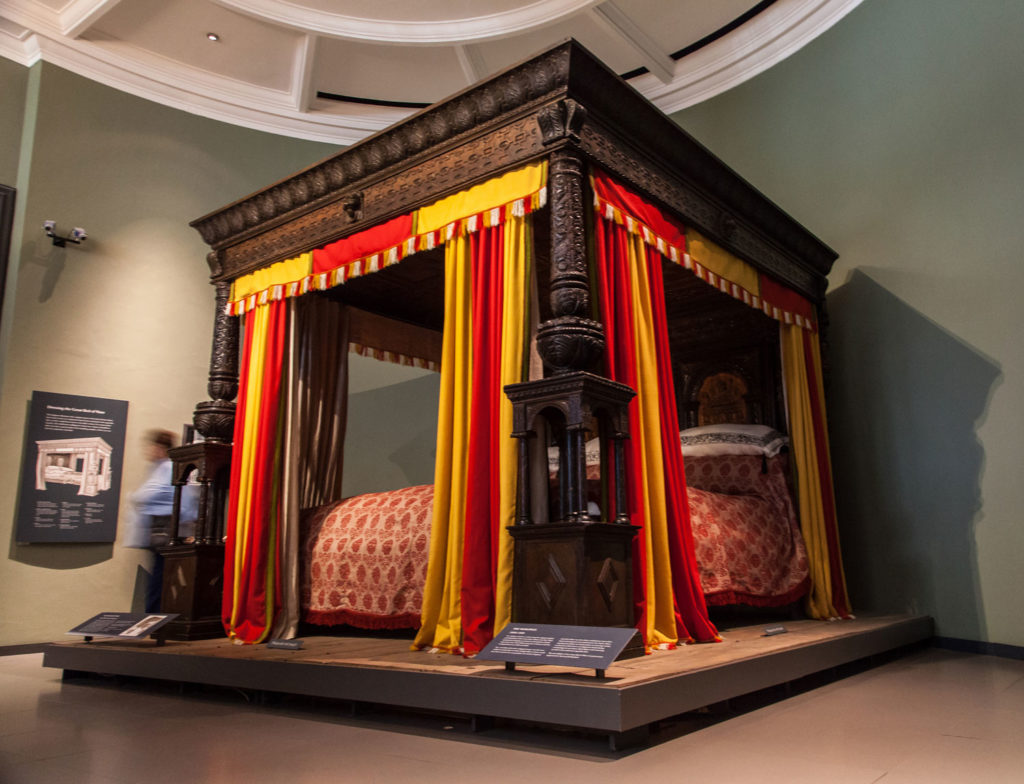 If you believe the stories then the fabulously ornate Great Bed of Ware does not want the likes of you sleeping in it. The lavish oak bed is richly decorated with carved figures and marquetry scenes, and is so large it is rumoured to comfortably sleep four couples.

There is a tale that suggests the bed was made in the 15th century for King Edward IV by carpenter Jonas Fosbrooke, but through the years found itself being passed between the inns of Wear, where commoners were able to sleep in it, and cover it in graffiti. The disrespect and defacing of this ‘regal’ item angered the ghost of Fosbrooke who now attacks any commoner who sleeps in the bed that he made for noble blood only.

In reality, the bed dates from around 1590 and was more likely built as a tourist attraction for a local inn. The carved graffiti which covers the bed was probably made by travellers using Ware as a stop off point on a longer journey. Whether you believe the tale or not, the Great Bed of Ware still remains quite possibly the most famous bed in British history, and has been mentioned in several literary works including Shakespeare’s Twelfth Night and Byron’s Don Juan.

The Koh-i-Noor Diamond
Tower of London

L: An illustration of the Koh-i-Noor Diamond in its original setting, from The Crystal Palace, and its contents : being an illustrated cyclopaedia of the great exhibition of the industry of all nations, 1851 R: A photograph of Queen Victoria in 1887, wearing the Koh-i-Noor as a brooch

At a whopping 105 carats the Koh-i-Noor Diamond may look beautiful, but this reportedly cursed gemstone has a dark side. The diamond once belonged to ferocious Sikh Maharaja Ranjit Singh who died during the Anglo-Sikh wars leaving his five-year-old son, Duleep Singh, as the last Maharaja of the Sikh Empire.

When the East India company seized control over the Sikh Empire Duleep Singh was kidnapped by the British Crown and exiled to Britain, where he was adored by Queen Victoria – who became godmother to several of his children, including Princess Sophia Duleep Singh, who went on to become a prominent suffragette. The infamous precious stone was also taken by the British Crown and is part of the British Crown Jewels to this day, but legend, and the stone’s tumultuous origins has earned it the reputation of causing death and misfortunate to any male who owns it.

Whether the stone actually does carry a curse affecting all the men who wear it or if the misfortune associated with it simply stems from the greed and envy that such a valuable stone inspires, we’ll never know. Either way, since being owned by the British royal family it has only ever been worn by females. The jewel has sat proudly (and safely) at the centre of Queen Elizabeth The Queen Mother’s Crown for more than 80 years. As part of the Crown Jewels it’s on display at the Tower of London, which has more than its fair share of ghost stories… 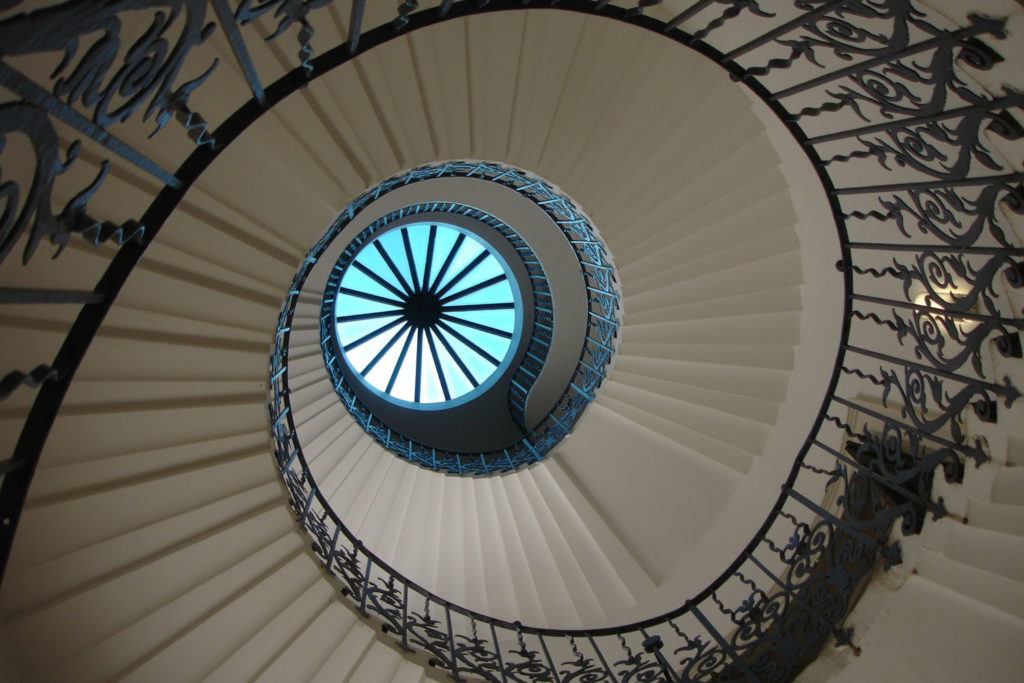 Rather a large ‘object’, the Tulip Staircase of the Queen’s House of Royal Museums Greenwich lays claim to being the first geometric self-supporting spiral stair in Britain and is rightly regarded as one of the great features of the former royal residence of James I’s queen, Anne of Denmark.

But it is also the location of the Rev R. W. Hardy’s famous ‘ghost’ photograph. The retired Canadian vicar and his wife visited the house in 1966 and like many people before and since happily snapped away at the elegant spiral of stairs. But it wasn’t until they returned to British Columbia and developed their films that they noticed a scarily cloaked spectral figure climbing the stairs.

Subsequent investigations into both stairs and photograph have thrown no further light on the unearthly mystery, although as recently as 2002 a member of staff reported seeing a ghostly figure cross a balcony of the stairway before disappearing – in time honoured ghostly fashion – through a wall. 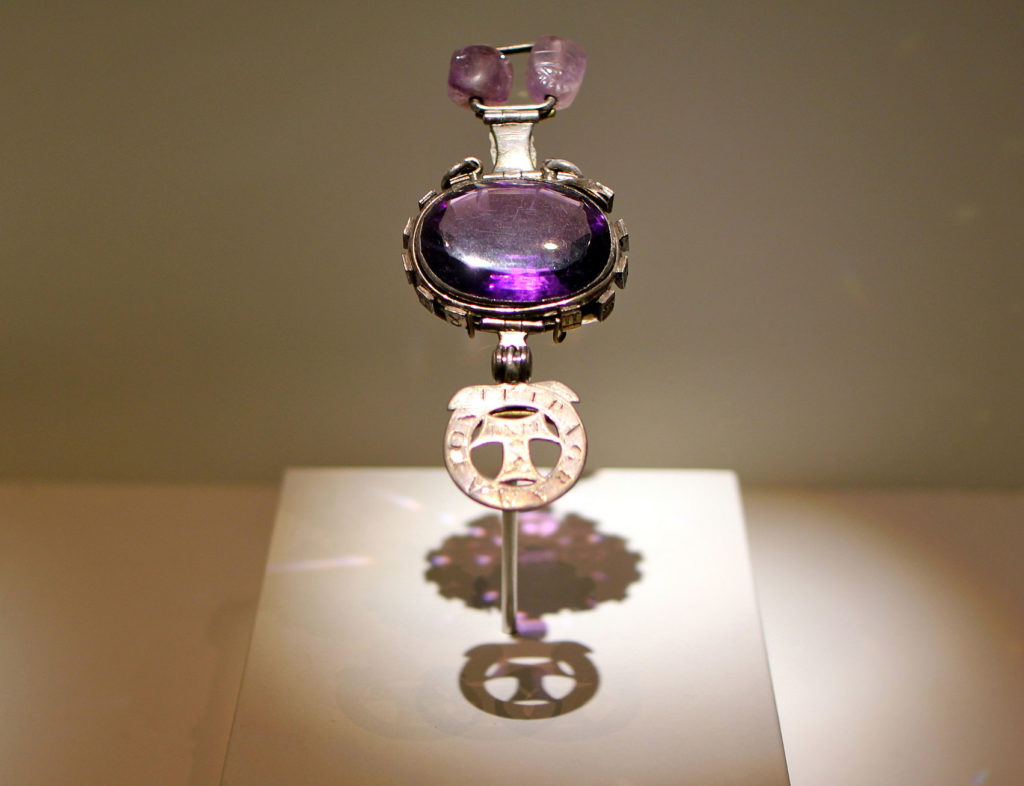 This apparently cursed gem was owned by 19th century polymath Edward Heron-Allen. So powerful was its curse that he eventually decided to have it stored away in a bank vault, inside seven locked boxes with a note of warning to anyone who dare handle it. Heron-Allen also left strict instruction not to remove the amethyst until 33 years after his death.

The curious story surrounding the stone says that it was stolen from the Temple of the God Indra during the Indian Mutiny by Colonel W. Ferris, an officer of the Bengal Cavalry. After Ferris’s health deteriorated and he died, the cursed amethyst was passed on to his son, who suffered a similar bout of bad luck and eventually gave it to Heron-Allen.

After facing a string of health and financial misfortunes, Heron-Allen made several attempts to get rid of the stone (even lobbing it into the Regent’s Canal), but they all proved unsuccessful – each time it returned to him. Less than a year after his death Heron-Allen’s daughter donated the amethyst to the Natural History Museum, where it is on display in The Vault.

One theory is that the tale of the Amethyst’s curse was fabricated to help bring validity to a story Heron-Allen wrote in his 1921 collection, The Purple Sapphire and Other Posthumous Papers Selected from the Unofficial Records of the University of Cosmopoli, under his pen name Christopher Blayre.