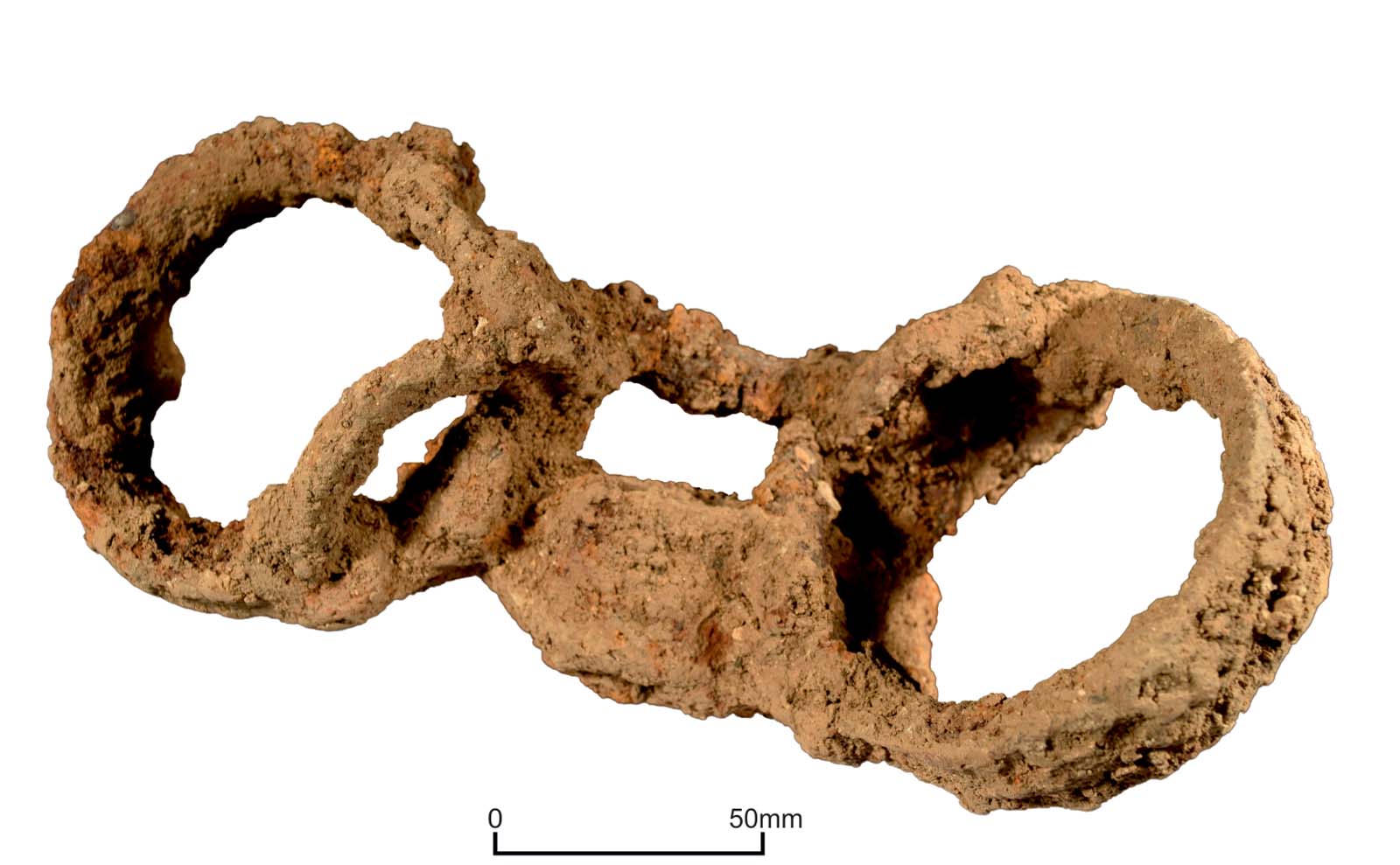 Slavery was commonplace in the Roman Empire and the practice is described in many written sources from the time. However, identifying enslaved people in the archaeological record can be difficult.

Iron shackles are one of the only artefacts that have a strong direct link to slavery that have been found on archaeological sites across the Roman Empire. But they are very rarely found with human remains and are even rarer in the finds from Roman Britain

Yet at Great Casterton in Rutland the first burial of a Roman-era man wearing lockable ankle fetters has been unearthed and Archaeologists from MOLA (Museum of London Archaeology) have been researching the skeleton.

The adult male was found buried in a ditch, secured at the ankles with a locked set of iron fetters by builders working on a home extension. 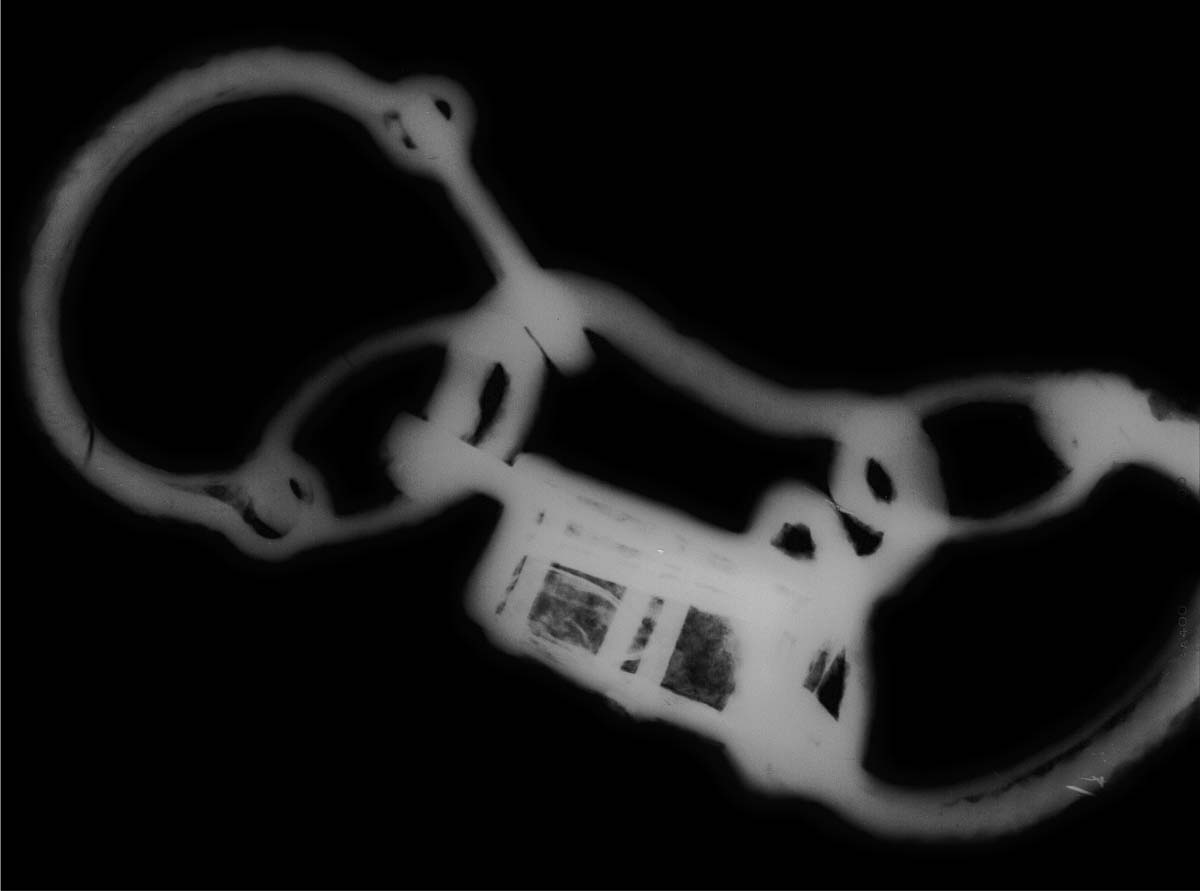 An x-ray of the Great Casterton shackles and padlock © MOLA

Radiocarbon dating undertaken by Leicestershire Police showed the remains to date from A.D. 226 to 427 (the Roman occupation of Britain is generally accepted to have lasted from lasted from AD 43 to AD 410) and MOLA archaeologists were brought in to fully expose, record and analyse what is now recognised to be an internationally significant find.

The results, originally published in the academic journal for Roman studies, Britannia, reveal this to be the first discovery of a burial wearing this form of restraint from Roman Britain, raising questions about who this person was and why they were shackled.

“For living wearers, shackles were both a form of imprisonment and a method of punishment, a source of discomfort, pain and stigma which may have left scars even after they had been removed,” says MOLA Finds Specialist Michael Marshall.

“However, the discovery of shackles in a burial suggests that they may have been used to exert power over dead bodies as well as the living, hinting that some of the symbolic consequences of imprisonment and slavery could extend even beyond death.”

A small number of burials have been found in the UK with heavy iron rings around the limbs and some of these individuals had also been beheaded. However, unlike the Great Casterton fetters, these rings, some of which may have been forged onto the bodies, probably could not have been functional restraints worn in life.

There is however a possibility that they might have been added in death and it is, therefore, possible that they are symbolic shackles meant to demean the dead or brand the wearer as a criminal or slave in the afterlife. A few Roman written sources also mention the use of iron restraints to prevent the restless dead from rising and influencing the living.

Examination of the Great Casterton skeleton suggests the man led a physically demanding life. A bony spur on one of the upper leg bones may have been caused by a traumatic event, perhaps a fall or blow to the hip, or else a life filled with excessive or repetitive physical activity. However, this injury had healed by the time he had died, and the cause of his death remains unknown. 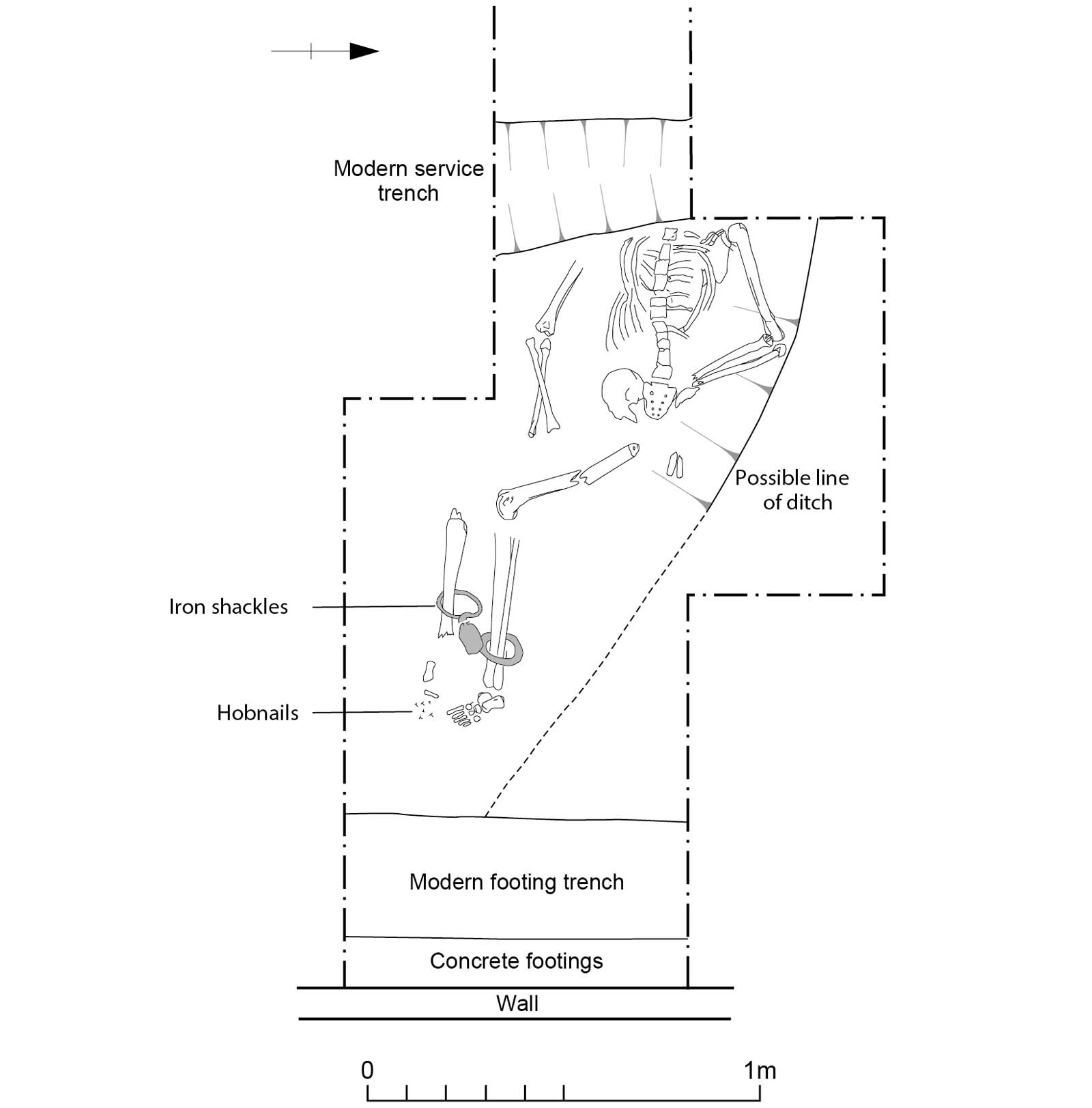 A diagram of the Great Casterton shackled burial © MOLA

The awkward burial position – slightly on his right side, with his left side and arm elevated on a slope – also suggests he was buried informally, in a ditch rather than a proper grave. There is a Roman cemetery just sixty metres away, yet it seems that this person was buried just outside – perhaps a conscious effort to separate or distinguish them from the people buried within the cemetery.

It is just one of several questions that remain.

Why, for example were this man’s fetters not removed to be reused? Was he enslaved during life? And was the manner of his burial a form of deliberate mistreatment of his body indicating ill will from those who had power over him at the time he died?

The identity of the man from Great Casterton will never be known for sure but his discovery presents the most convincing case for the remains of a Roman slave yet to be found in Britain.

“The chance discovery of a burial of an enslaved person at Great Casterton, reminds us that even though the remains of enslaved people can often be difficult to identify, that they existed during the Roman period in Britain is unquestionable,” adds MOLA Archaeologist Chris Chinnock.

“Therefore, the questions we attempt to address from the archaeological remains can, and should, recognise the role slavery has played throughout history.”

MOLA works in partnership to develop far-reaching research and community programmes. Find out more at mola.org.uk, and on Twitter, and Facebook.