It’s the centenary of the great Australian painter Sidney Nolan (1917 – 1992), famed for his Ned Kelly series of paintings. With events and exhibitions happening across the UK here’s thirteen facts about him to whet your appetite

From a young age, Nolan yearned to travel and visit the places where his heroes – including French poet Rimbaud and Danish philosopher Kierkegaard – were born. In 1937 at the age of just 20, he even attempted to get to Paris by stowing away on a ship bound for Europe with a fellow student from evening classes at the National Gallery of Victoria Art School. However, before the ship had even left the Port Phillip Bay, they were discovered and returned to shore on the pilot boat. 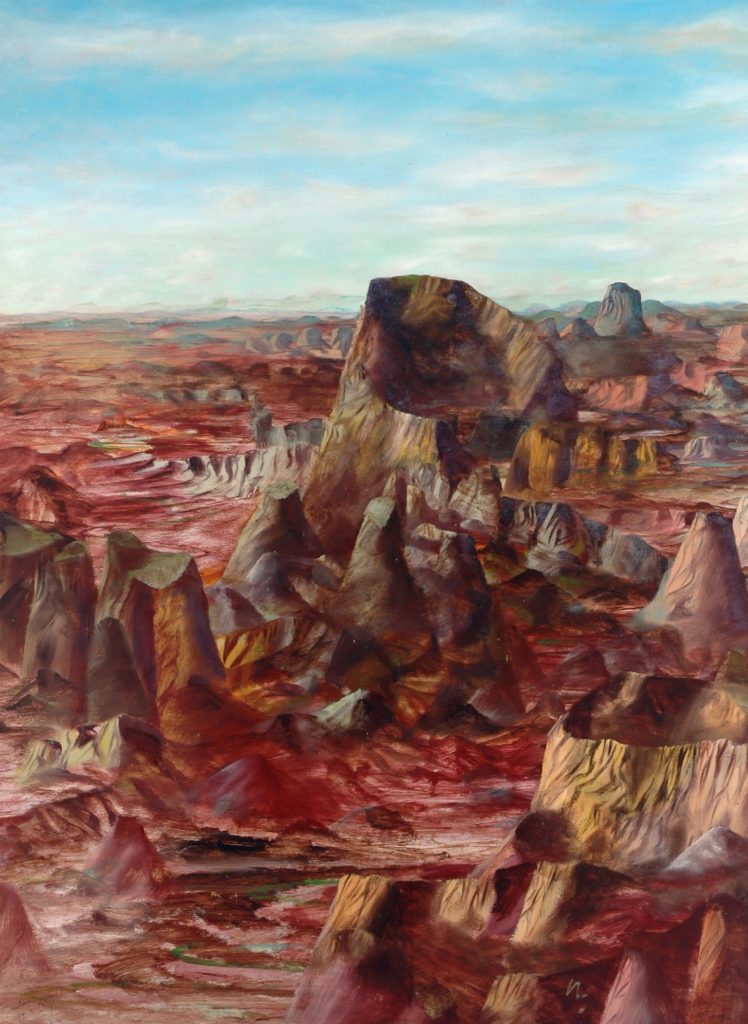 In the early 1940s Nolan became a close friend of art patrons John and Sunday Reed and eventually lived with them at their home outside Melbourne, known as Heide (now the Heide Museum of Modern Art). Despite already being married, Nolan soon began an affair with Sunday. Although his time at Heide with the Reeds led to the production of Nolan’s first series of Ned Kelly paintings, one of the greatest series of Australian paintings of the 20th century, on a personal level it proved to be destructive, resulting in the breakdown of Nolan’s marriage. The subsequent failure of his relationship with Sunday became the catalyst for his move away from Melbourne and eventually Australia.

Nolan’s paintings of Australian outlaw Ned Kelly, usually depicted as a figure wearing a square black mask that only revealed his eyes, have become icons of Australian art; so much so that it was used prominently in the Tin Symphony section of the 2000 Sydney Olympics Opening Ceremony. Nolan was attracted to Kelly’s anti-hero status and used his figure to contemplate universal themes of injustice, love and betrayal. His interest may have also had a personal element as Nolan’s grandfather was a police officer who had been involved in the hunt for the elusive Kelly.

Nolan may have identified with Ned Kelly as he too was an outlaw of some kind; after being conscripted into the Australian army in 1941, he deserted in 1944. Nolan went into hiding, living and working under the assumed name Robin Murray until 1949 when he was “discharged in absentia” by the Australian government. The first Ned Kelly paintings were produced during this time in hiding. 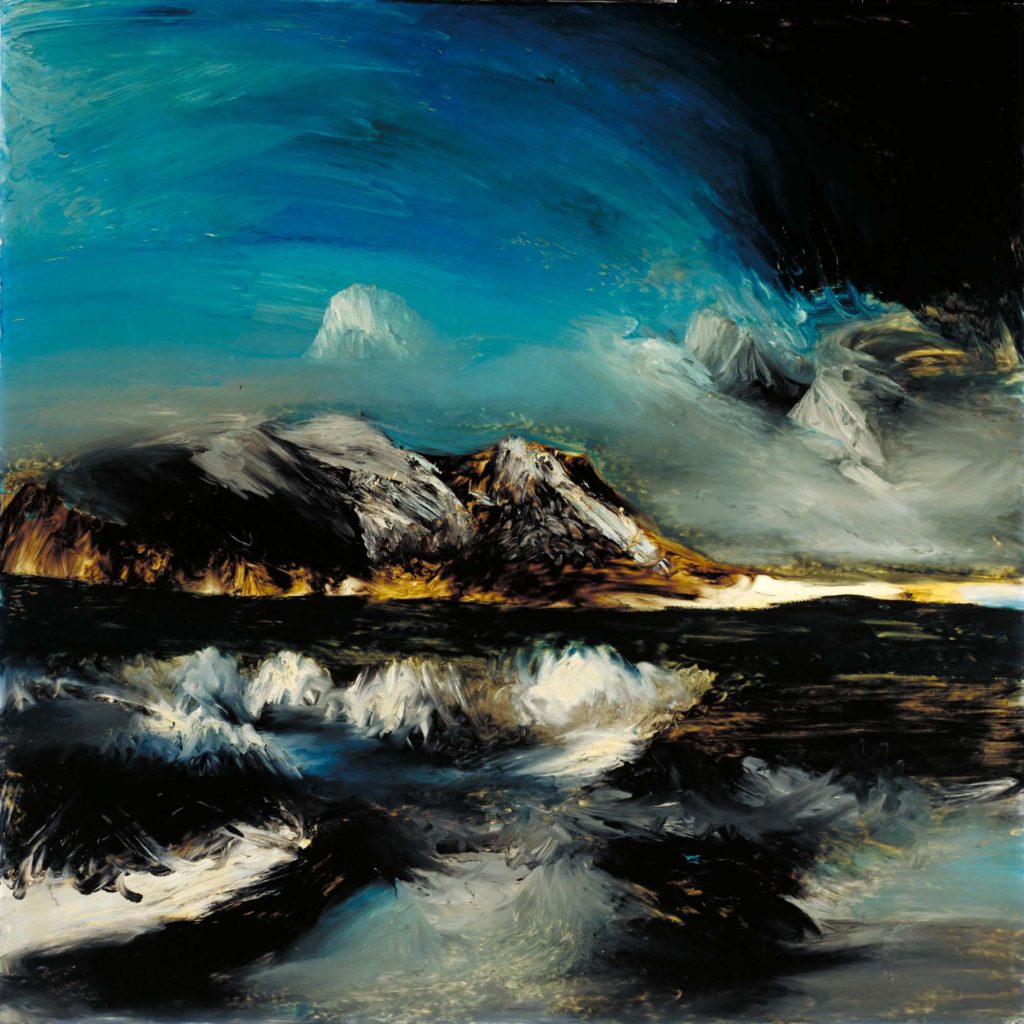 Nolan travelled widely throughout his lifetime, exploring parts of the globe that very few painters of the 20th century have ever visited including Antarctica and into the Arctic Circle. When aked about his nationality after the opening of an exhibition of Australian art at Folkestone in April 1963, Nolan simply replied “Earthling”.

Life in the UK 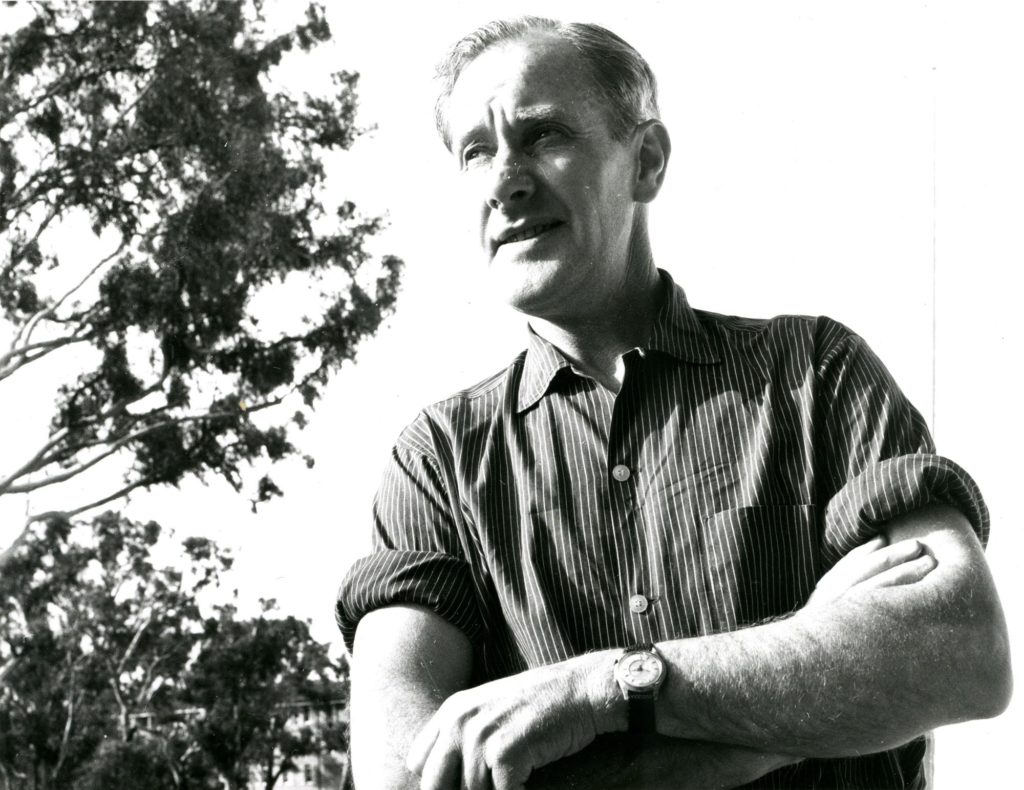 Nolan spent more of his life in the UK than in Australia. He moved to the UK in the early 50s and remained here until his death in 1992. 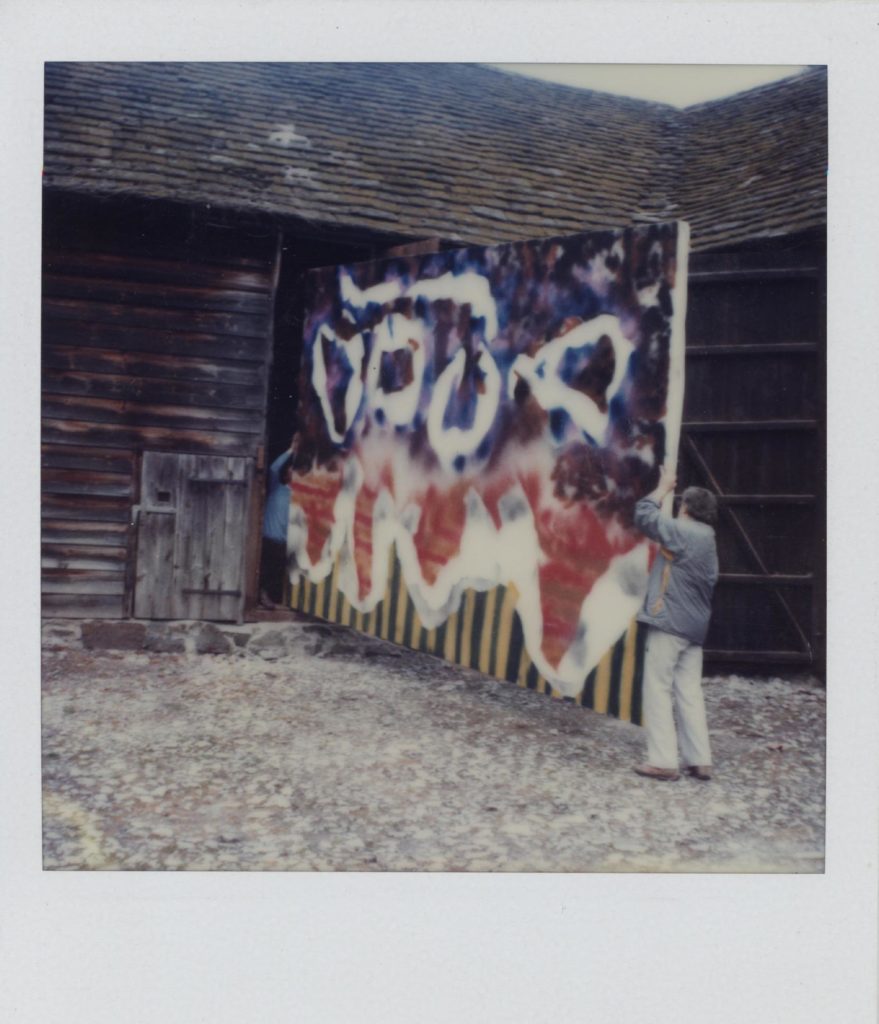 Sidney Nolan manouevres a painting into the at the Rodd, October 1986.

An extraordinarily innovative and experimental artist, Nolan was also highly prolific. He is believed to have produced over 30,000 artworks in his lifetime. 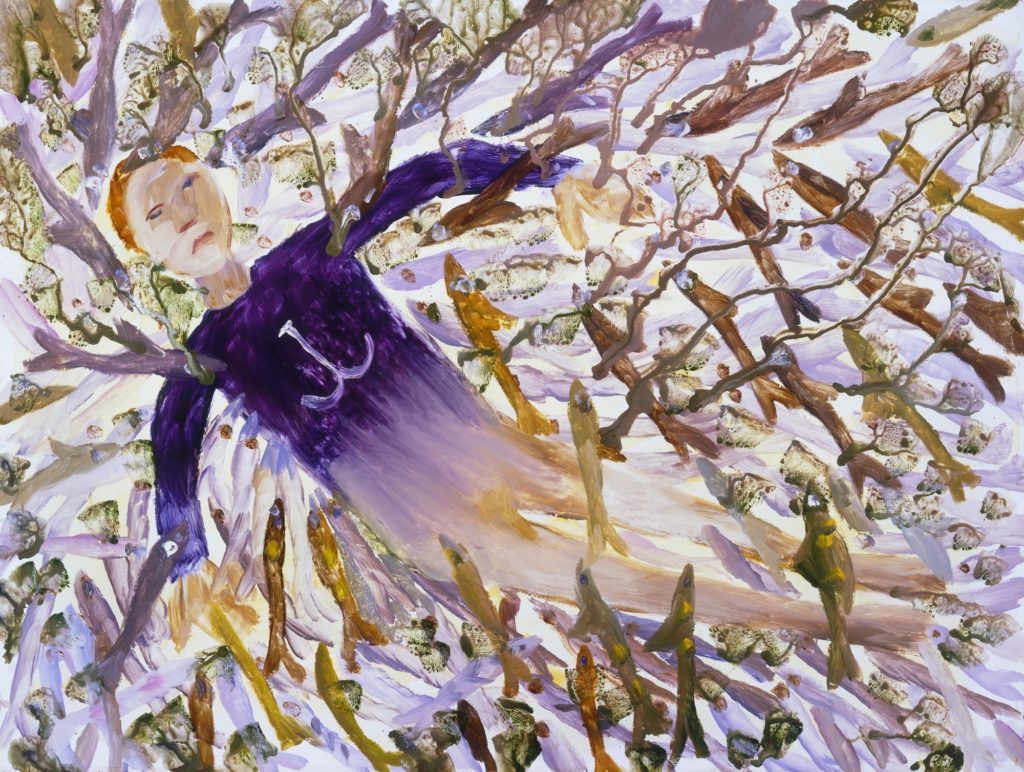 Nolan began his artistic career working as a commercial artist in Melbourne and was encouraged to experiment with new materials, something that he continued to do throughout his career. He was the first artist recorded to have used alkyds (the dominant resin used in most commercial “oil-based” coatings) and began to use household paints in his own artworks before either Jackson Pollock or Willem de Kooning. 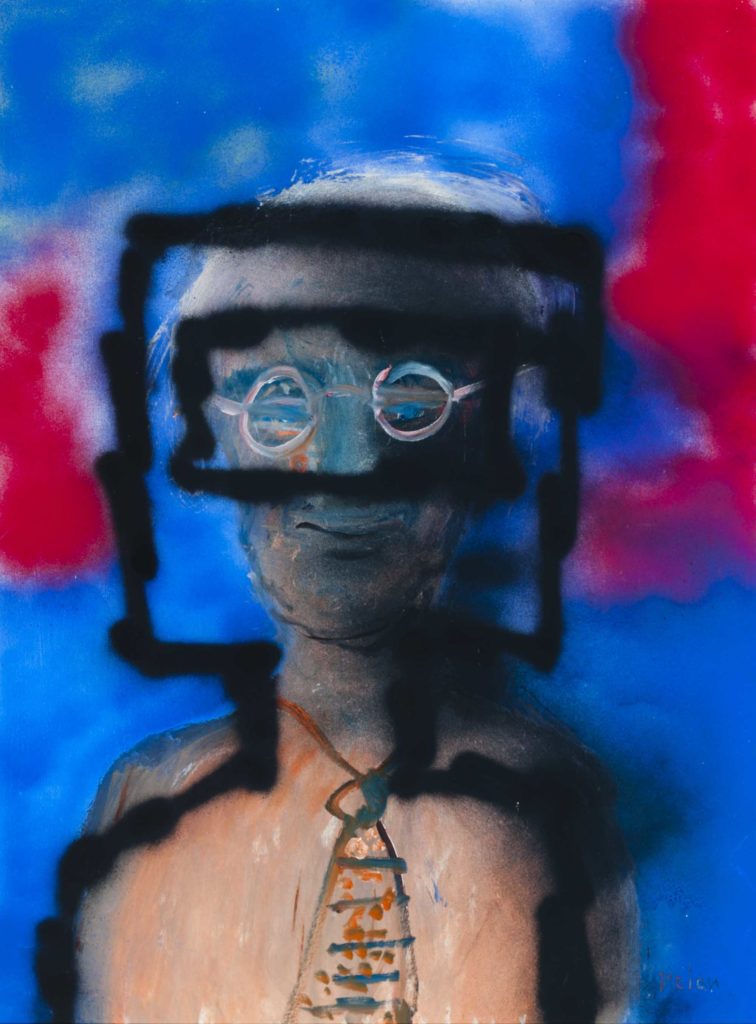 In his later life Nolan returned to his roots in commercial art and began using spray paint as his preferred medium. He even created a special rig in his studio that enabled him to spray paint while suspended from the beams with a can in each hand. 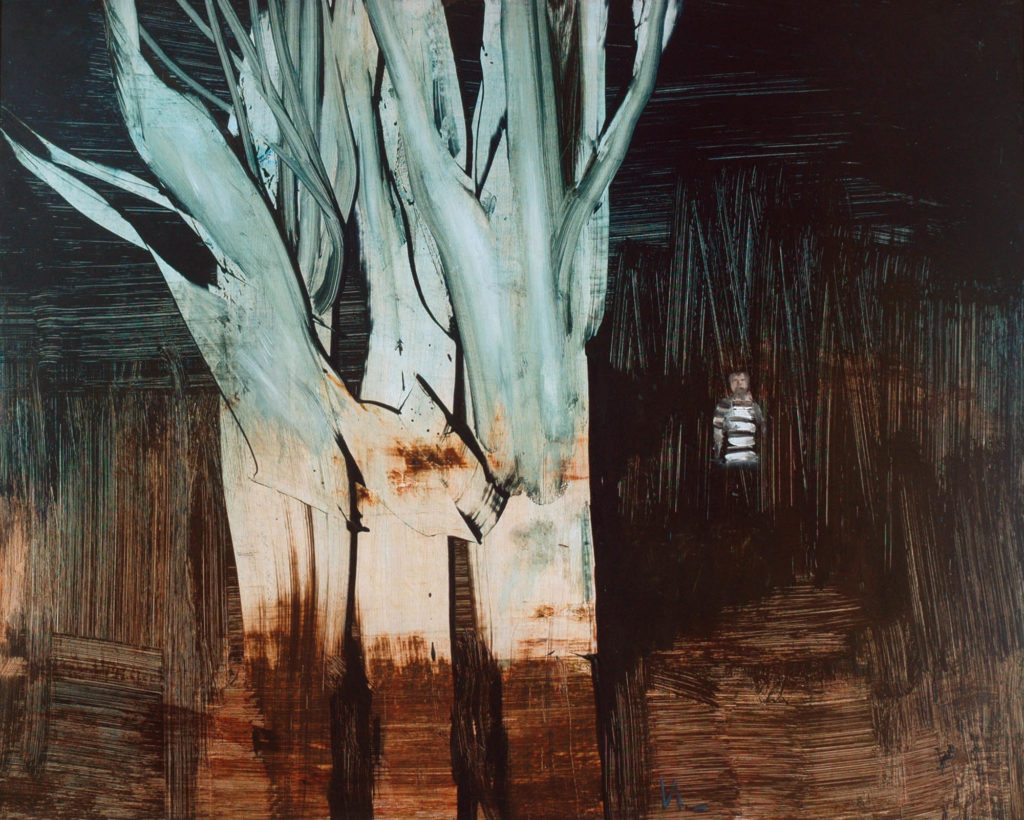 In the early 1960s, Nolan was commissioned to design sets and costumes for a new production of Stravinsky’s controversial ballet The Rite of Spring. Daringly, both Nolan and the choreographer Kenneth Macmillan rejected the ballet’s Russian setting. Instead, Nolan drew inspiration from Aboriginal rock art and reimagined the setting in the arid regions of central Australia. Nolan was excited by Aboriginal art and saw it as being the first mark of art in the world.

Nolan was a member of the Angry Penguins, an Australian literary and artistic avant-garde movement of the 1940s, who were early exponents of surrealism and expressionism. The movement took its name from a Modernist magazine originally published by the Surrealist poet Max Harris as a literary magazine, which under the patronage of John and Sunday Reed evolved to embrace the visual arts. 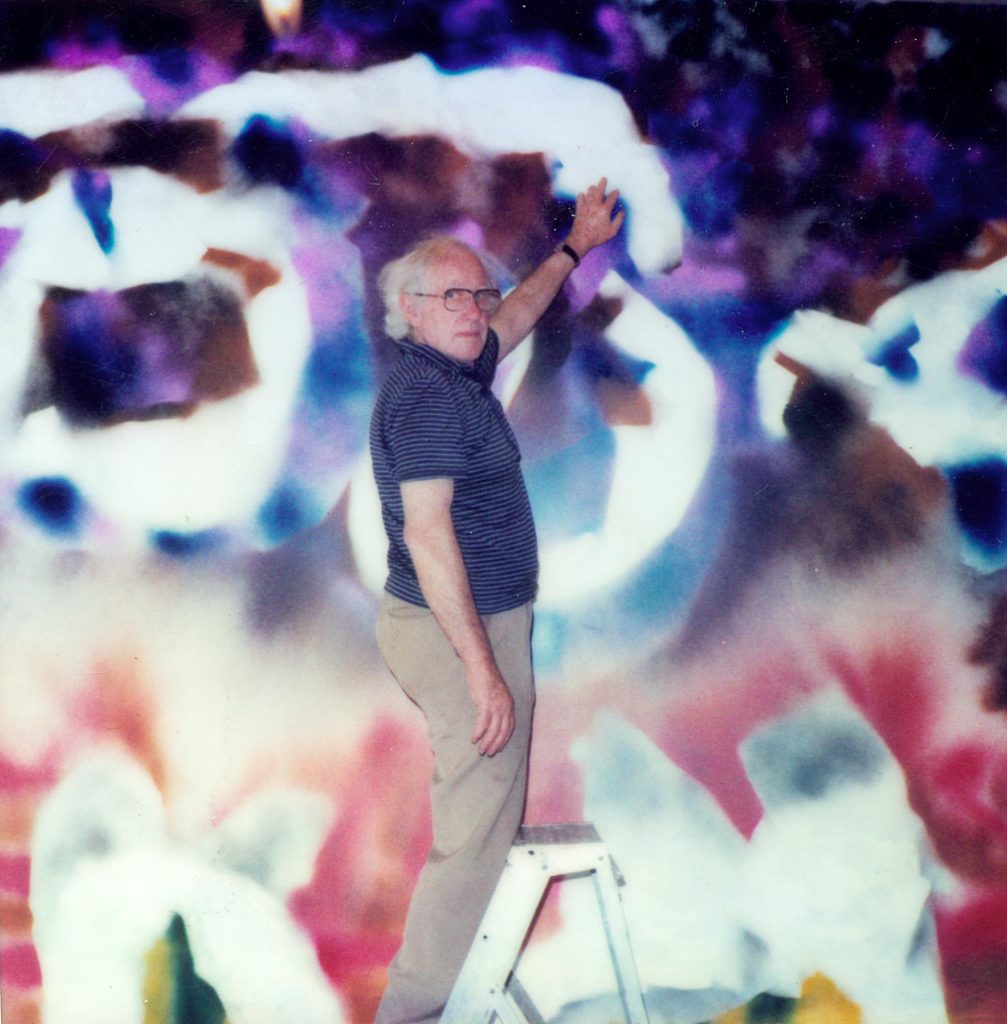 Sidney Nolan with large abstract at The Rodd, SNT121 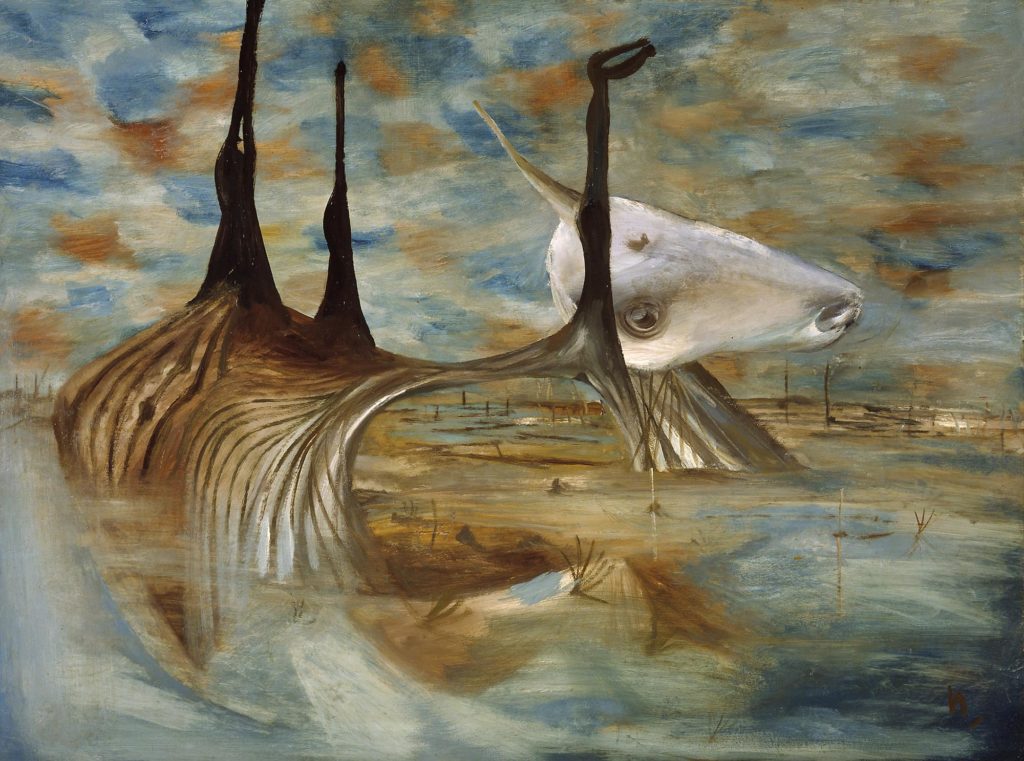 Sidney Nolan donated and gifted many of his most important works to galleries and museums around the world. In a final major act of philanthropy he gave property and land to the Sidney Nolan Trust, a charity registered in the UK, which he established at his home The Rodd on the Welsh Border. The charity survives Nolan and continues to maintain his legacy and vision to create a place for great art for everyone.

Transferences: Sidney Nolan in Britain is at Pallant House Gallery in Chichester until June 4 2017.

Unseen: Works from the Sidney Nolan Trust Collection is at the Australian High Commission in London until May 5 2017.

Pallant House Gallery is a unique combination of a Grade 1 listed Queen Anne townhouse and an award-winning contemporary extension. It is based in the heart of Chichester and holds one of the best collections of Modern British art in the country. There is an extensive temporary exhibition programme including…

The Trust was founded by Sidney Nolan in 1985 to create a unique setting for his artistic legacy and to provide inspiration and education across the arts. The Trust serves as a resource for the appreciation of the work and the career of its founder in addition to managing an…

One comment on “Sidney Nolan Centenary: Thirteen facts about the man who painted Ned Kelly”