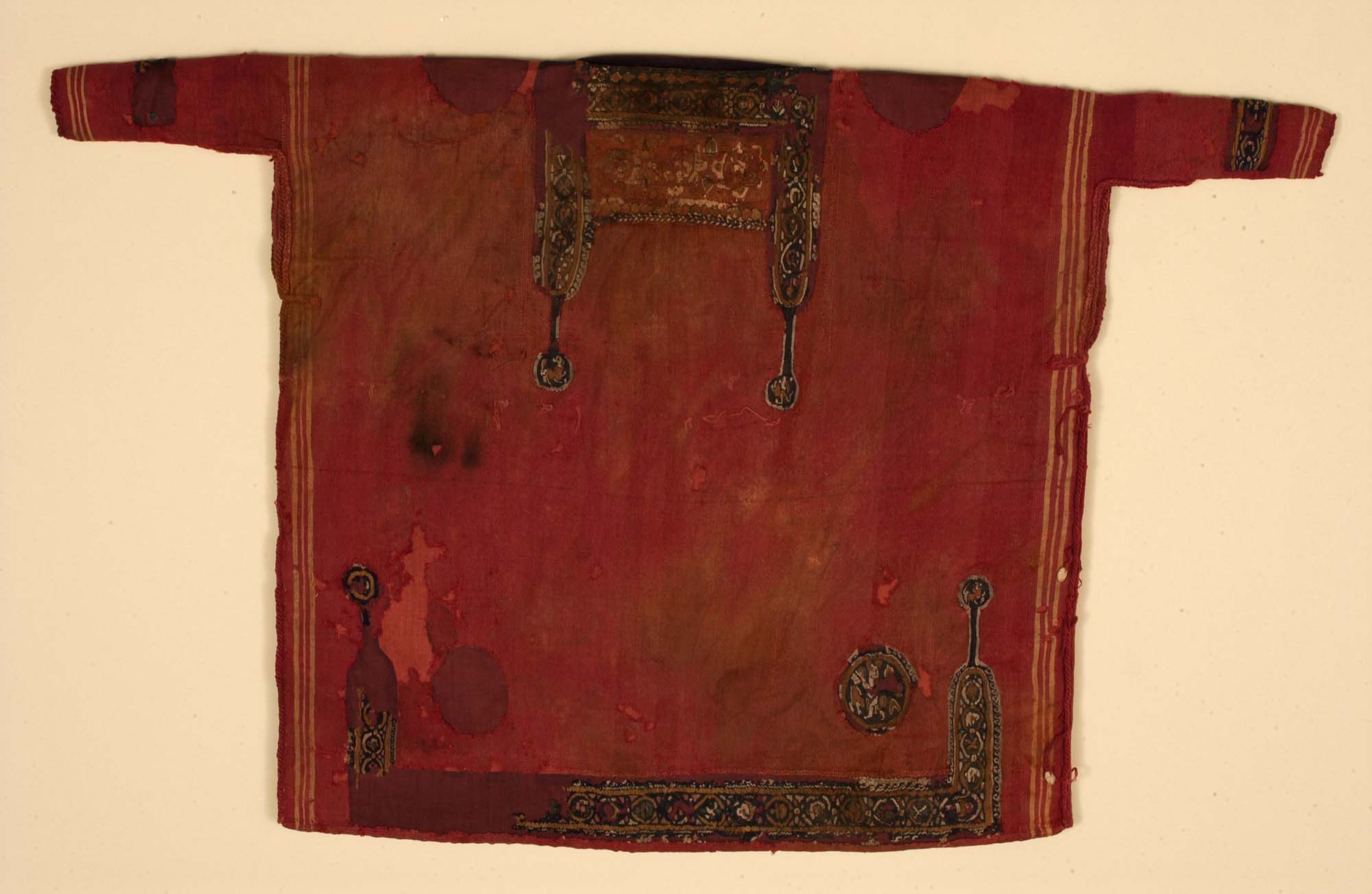 This is a fine example of a dyed woollen tunic from around 700-800 AD. It was worn by a small child when they were buried in a cemetery at Matmar 1300 years ago. The intricate woven detailing shows the popular colourful styles of the Coptic Pperiod. © Bolton Museum and Art Gallery

Ian Trumble, Bolton Museum’s Collections Access Officer for Archaeology, Egyptology and World Cultures, on some of the oldest textiles ever discovered –  now in the museum’s Ancient Egyptian collection

Bolton’s Egyptology collection came via the excavations of the Egypt Exploration Society (EES) from the late 1800s through to the 1980s.

A lot of museums acquired textiles from those excavations, but Bolton Museum’s first two curators, the father and son team of William and Thomas Midgley, were particularly interested in the development of modern textiles from ancient textiles, which is one of the reasons they got the job at Bolton – being a major textile town.

The museum opened in 1884 but already in 1883 (when William Midgley was appointed curator), a local amateur Egyptologist called Annie Barlow, who was the daughter of James Barlow of Barlow & Jones Textile Company, became the Bolton representative for the EES. This whole web of connections meant that people were connecting textiles in Egypt with textiles in Bolton.

The EES was co-founded in 1882 by the author and travel writer Amelia Edwards who had travelled Egypt in the early 1870s and witnessed first-hand the destruction of Egyptian sites. People were travelling down the Nile, going into tombs, snapping a hand or two off a mummy and bringing them back as souvenirs. Edwards even witnessed her own travel companions smuggling items themselves. 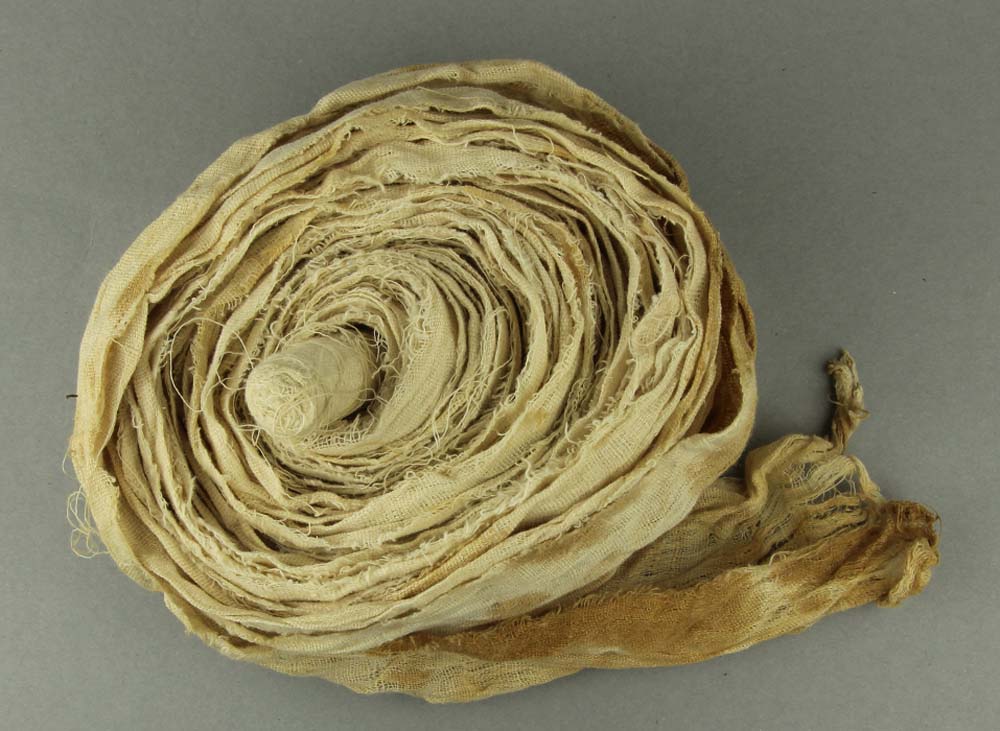 Rolls of linen bandage like this one were often found in tombs during the pharaonic period. As a necessary part of the mummification process, it may have been important for any surplus materials used during the ritual to be buried with the person. © Bolton Museum and Art Gallery

This sleeve was part of a tunic and dates from the Coptic Period, around 1500 years ago. © Bolton Museum and Art Gallery

Her resulting 1877 book A Thousand Miles Up The Nile became a major best seller, which later allowed her to gain wide support for the EES (then known as the Egypt Exploration Fund), to properly excavate, record and save Egyptian heritage.

At this time Egyptology was very popular with the cotton mill owners of Lancashire.

Religion was seemingly a major factor in this interest. Northern mill owners were often non-denominational, Annie Barlow was Methodist, and the EES were excavating sites in Egypt that were mentioned in the bible. With the intention of protecting Egypt’s heritage, the EES were also gearing their activities towards the interests of their funders in excavating some sites with religious or biblical connections.

In the case of Annie Barlow, her family were also staunch abolitionists. Her father James was already sourcing cotton in Egypt in the 1860s to avoid American sourced cotton because of its slave connections. So that also connected some of the Lancashire mill owners with Egypt.

Health was another factor; Egypt was often recommended as the place to go to recuperate if you weren’t feeling too well. A couple of weeks in Egypt sailing down the Nile was thought to be just the thing to get you back on track, and the people who could afford to do this were the big business owners, and certainly for the northern towns, they were in textiles. 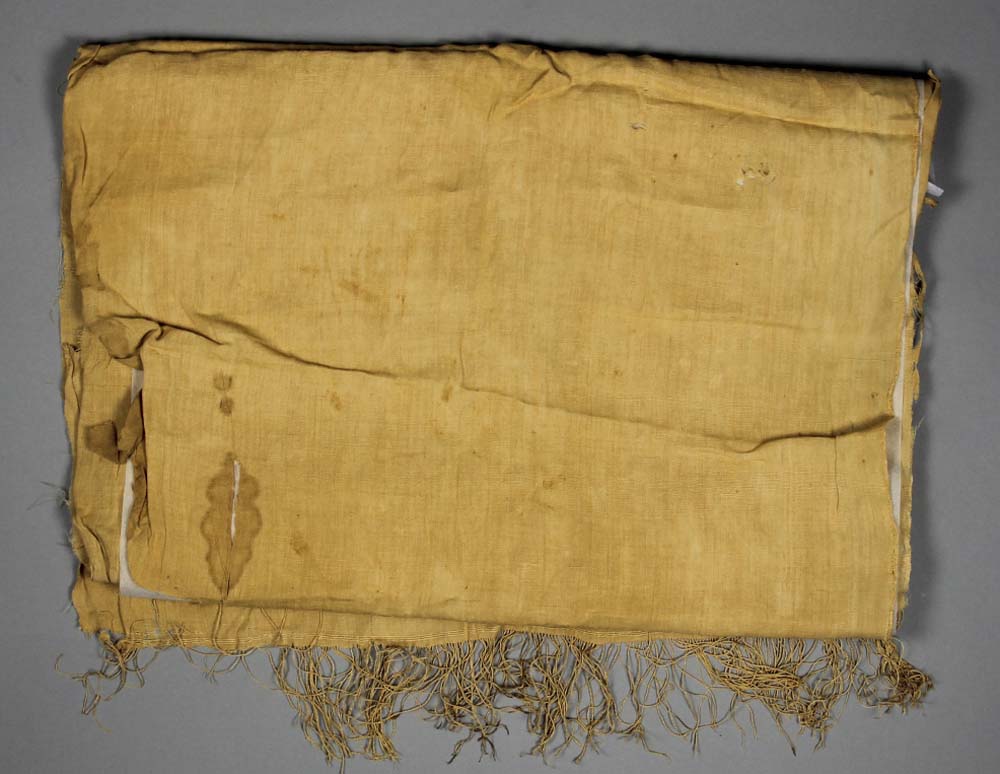 This roll of mummy cloth is made from linen and dates to the Middle Kingdom around 3800 years ago. Washed, pressed and folded rolls of linen are often found in tombs and are connected with the god Osiris and rebirth. © Bolton Museum and Art Gallery 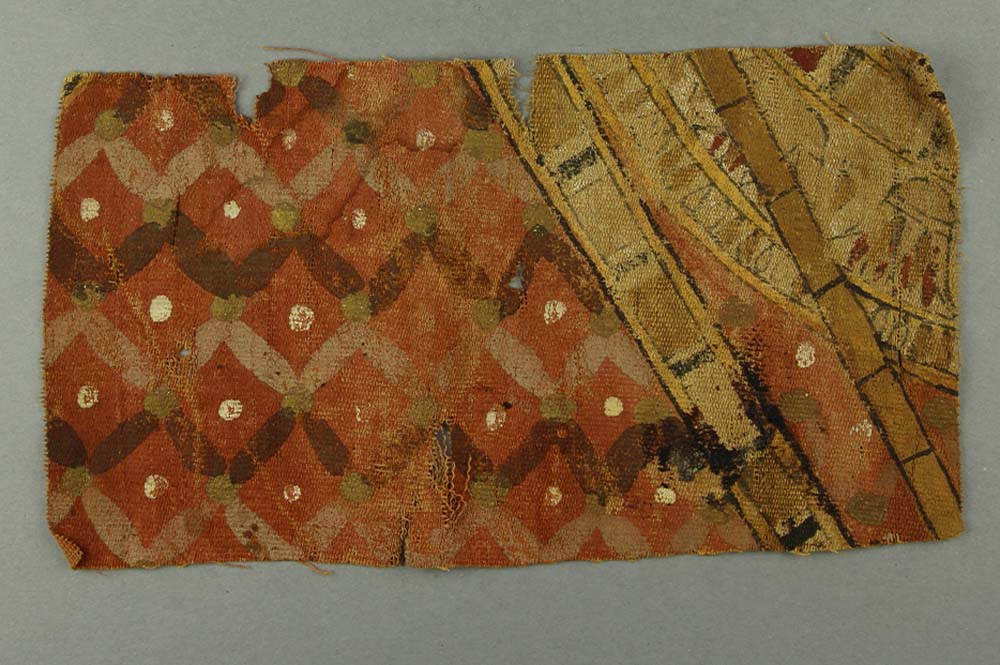 This small colourfully painted fragment was once part of a shroud that covered a mummified person. When complete it would have shown the image of Osiris, the god of the dead, in mummy form. Only his flail, beaded collar and decorative bandages are visible. By being buried in this shroud the deceased was hoping to take the form of Osiris and like him be reborn in the afterlife. © Bolton Museum and Art Gallery

We know that Annie wanted to be heavily involved in the family business, but as a well-to-do Victorian lady, she wasn’t really allowed to. She was still involved in other ways, certainly in the welfare of the workers, and via her interest in the history of textiles. She gave lectures on the subject, helped by her personal collection of Ancient Egyptian textiles, which came from the EES.

We have some really nice examples in the collection that she personally attached to little boards and wrote things about them. She would hand these pieces out for people to look at during her lectures and she certainly threw an awful lot of time and effort into the EES and the development of her collection of textiles.

“It contains resin mixtures that show the mummification process was happening 1,500 years before previously thought”

Because the majority of the Bolton collection comes from the EES, it is very well provenanced. In terms of knowing what kind textiles they are, where they’re from, the date and the potential for study that’s quite important, but what’s also good is how it spans the whole breadth of Egyptian history. We’ve got everything right back to around 5,000 BC, from the pre-dynastic period right up to the Coptic period.

We also have textiles from various sites spread across Egypt and examples of many different materials as well. The collection doesn’t just show linen, but also wool and then the later introduction of cotton.

At the moment we’re displaying the breadth of our textiles. One of our earliest textiles is particularly important. Recent research has shown it contains resin mixtures that show the mummification process was happening 1,500 years before previously thought – into the pre-dynastic period. The research was released last year by an interdisciplinary team lead by Dr Jana Jones (Maquarie University) and Dr Stephen Buckley (University of York and University of Tübingen). 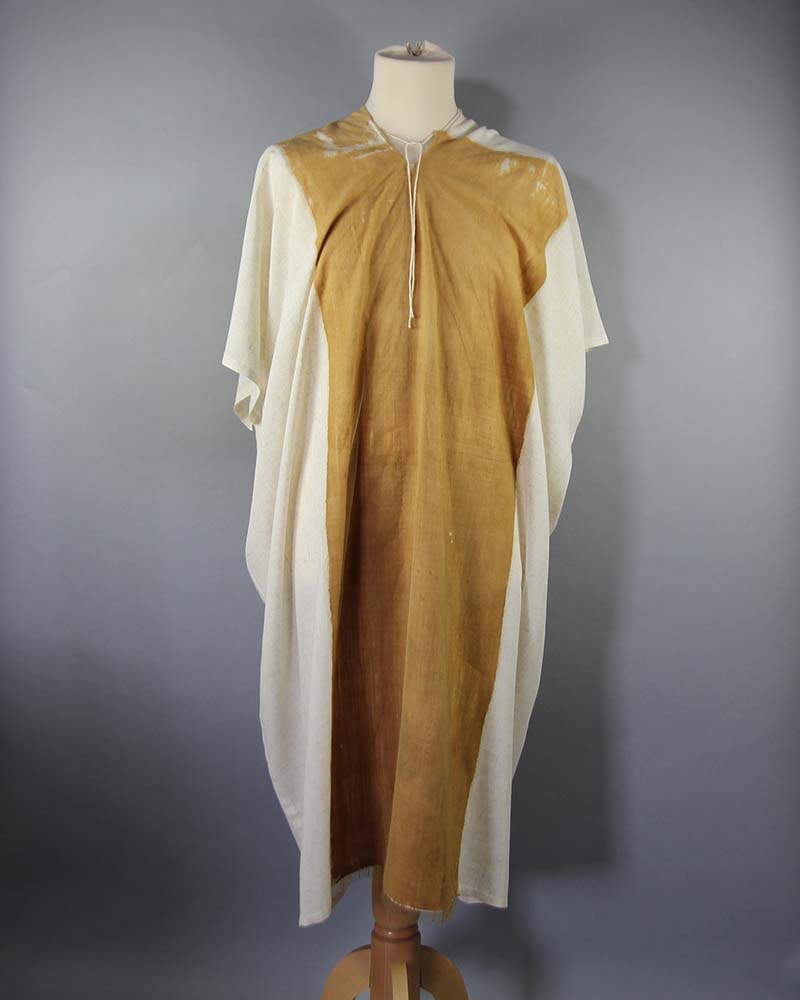 This tunic fragment, now reconstructed as a whole, possibly belonged to Bolton’s mummy of the Unknown Man. In Ancient Egypt textiles were costly and would have been reused when they had served their original purpose. Once a bag tunic, it seems to have been cut into strips and may have been used to wrap the mummy. It dates from the New Kingdom and is around 3200 years old. © Bolton Museum and Art Gallery 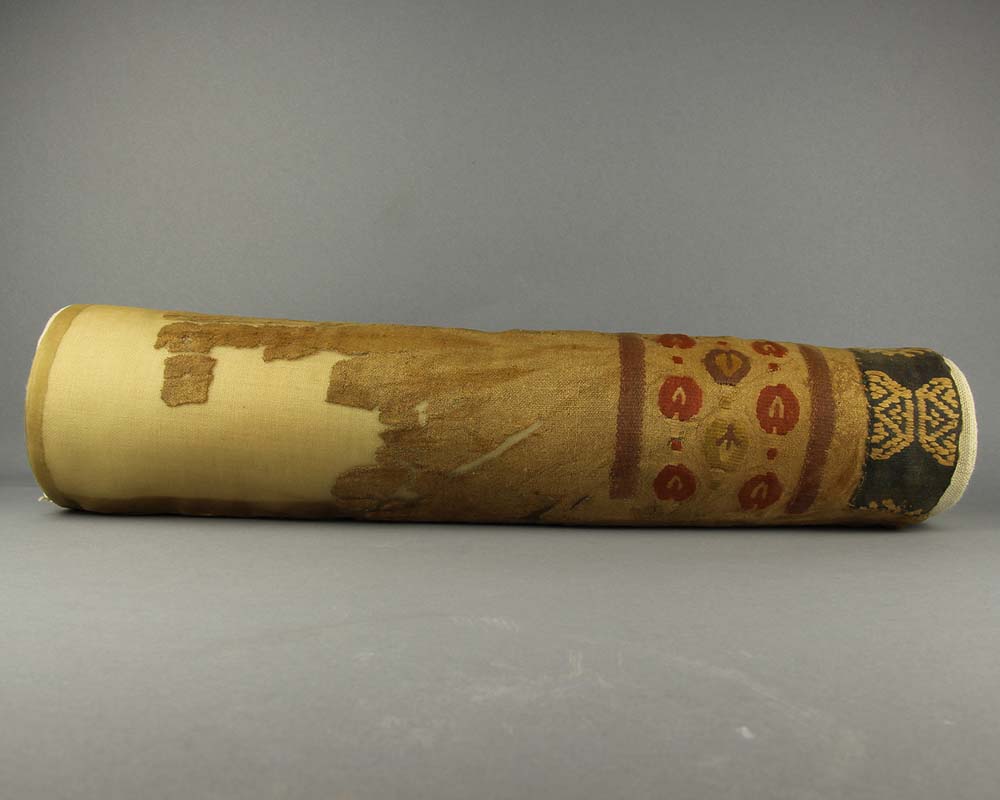 This sleeve would once have been part of a tunic. It was excavated at Illahun and dates from the Coptic Period, around 1500 years ago. Decoration on Coptic tunics was often woven separately then sewn onto the tunic, as has happened here with the sleeve’s blue cuff. © Bolton Museum and Art Gallery

That is one of the things that fuelled the Midgleys’ interest in studying textiles because they were seeing these things being excavated, knowing they were 3,500 years old but were baffled as to how the Egyptians were producing them when the mills in Bolton were struggling to produce something so good.

A particularly nice piece that also relates to Thutmose III, it’s not a textile but a block of stone from a temple, and the detail and the range of colours in that is just incredible. And it’s the same in the later textiles, particularly the Coptic textiles which are very colourful, vivid and detailed with woven patterned detail in them.

“excavated from a mummified child”

On display in the new gallery there are Coptic child’s tunics with beautiful red colours and nice woven woollen detail. They’re a lot younger in terms of the collection, only about 1,300 years old, but it’s still fair to say that their survival is incredible; the one thing that people are amazed by is the colour; the red in these fabrics is particularly striking and vivid.

Apart from the preservation and the detail, when you look at things like a child’s tunic and think that it was excavated from a mummified child, it’s a pretty sobering thought.

A lot of the textiles in Ancient Egypt, certainly for the general population, would have been produced in the home; where evidence shows they were produced on looms. But you would also have had textile workshops, run by the state, temples or wealthy individuals. You can’t really think about it in terms of modern textile production or huge buildings full of people producing textiles, but the textile ‘industry’ is of course an important connection to us in Bolton.

We stake a claim to the beginning of the Industrial Revolution with the invention of the spinning mule in 1779 by Samuel Crompton, so given that longstanding connection to textiles history I think it would be very strange for us not to have a strong textile connection in our Ancient Egyptian collection. 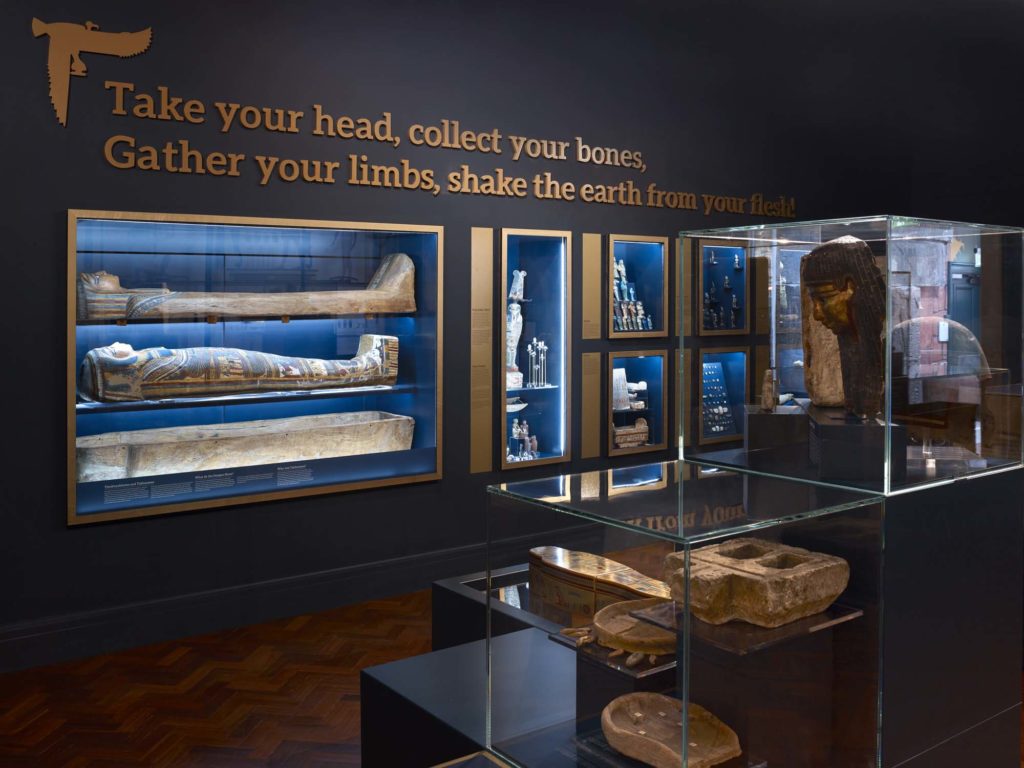 Bolton’s collection of ancient Egyptian material is arguably one of the most important in a British local authority museum (i.e. a non-National, non-University Museum), and numbers around 12,000 objects from over 65 sites in Egypt. Explore it in the Egyptology Gallery at Bolton Museum and Art Gallery and online.

Bolton is a medium sized regional museum that has its origins in the Chadwick Museum and Mere Hall Art Gallery.