Bronze Age sun pendant, 1000–800BC © The Trustees of the British Museum

One of our most spectacular Bronze Age treasures, the sun pendant, is heading to Shrewsbury Museum who have plans to acquire more spectacular local finds from the period

Discovered in the Shropshire Marches in May 2018 by an anonymous metal detector user, the Bronze Age sun pendant also known as a bulla is one of the most important finds of its period in this country for over a century.

Over 3,000 years old, and dating between 1000–800BC in the late Bronze Age period, the elegant form and intricate decoration of the gold pendant includes an exceptionally rare depiction of the sun – not previously seen on objects found in Britain.

Now this extraordinary object is to be displayed to the public for the first time at Shrewsbury Museum & Art Gallery as part of the British Museum’s National Programme, which seeks to develop partnerships across the UK as part of its commitment to sharing the collection as widely as possible.

The rare and spectacular object will be hosted at the museum later this year from September until December.

Side view Bronze Age sun pendant, 1000–800BC © The Trustees of the British Museum

Sun pendant, ornate side. © The Trustees of the British Museum 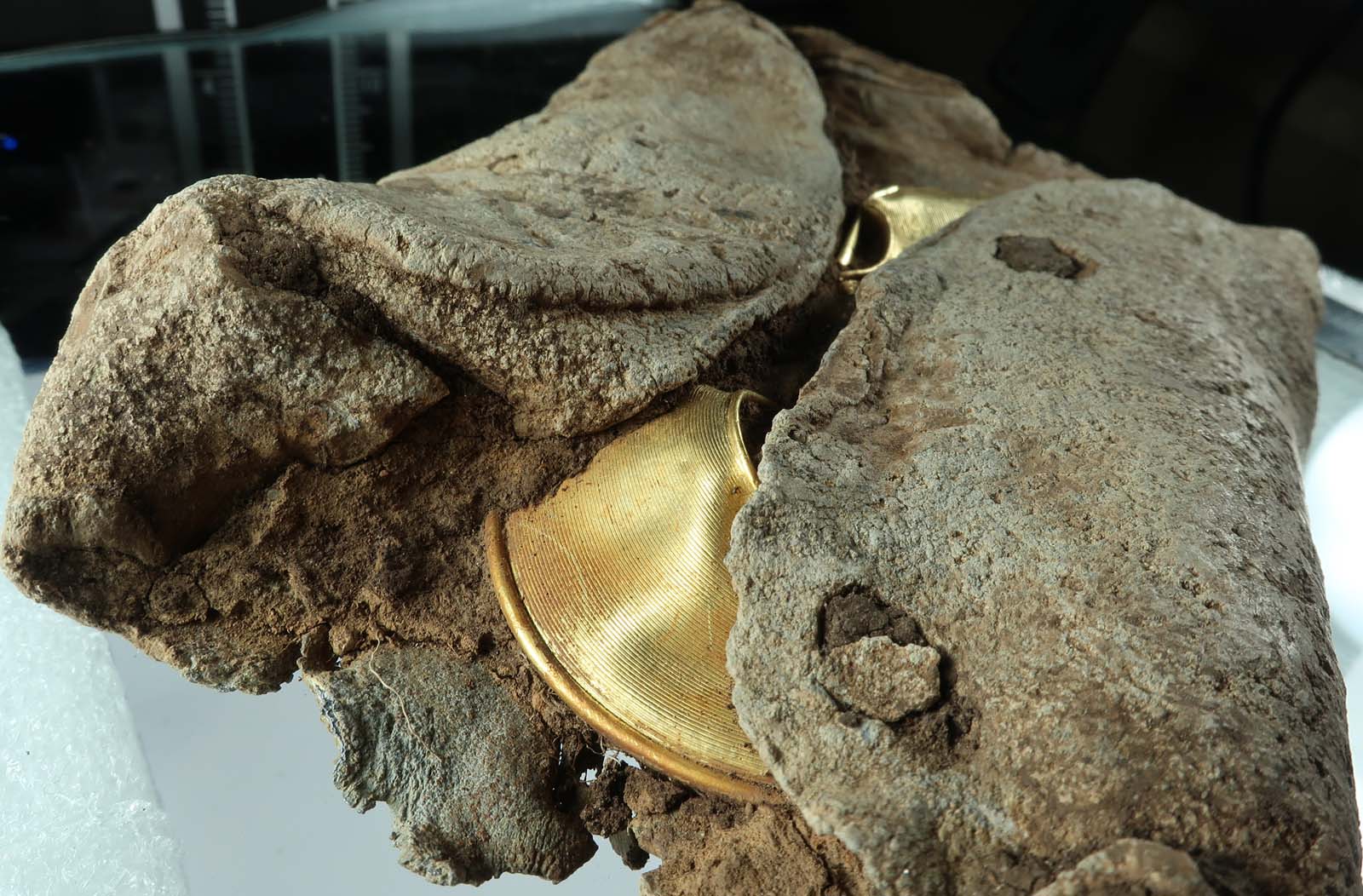 Solar symbolism was a key element of mythology and belief in the Bronze Age and the pendant celebrates the life-giving power of the sun during the time of the earliest metalworkers.

A hugely significant addition to knowledge of the art and iconography of Bronze Age Britain, experts say the pendant marks the end of an era as one of the final expressions of an art style and belief system that had lasted for almost 1,500 years.

Deposited intentionally in a wetland landscape of bogs and ponds 3,000 years ago, the pendant provides a starting point for discussions about the role of both water and the sun in the religious beliefs and life in deep history.

Measuring 3.6cm high and 4.7cm wide, the bulla is only the second ever found in Britain. The other Irton bulla – now lost – was discovered near Manchester in 1722 and is only known from a picture. Its quality was so high that experts of the day believed it must be Roman.

Last recorded in 1806 before disappearing from records, curators hope it may one day be rediscovered in a private collection. In Ireland, six similar gold pendants have been found, though these are not identical to this gold pendant. 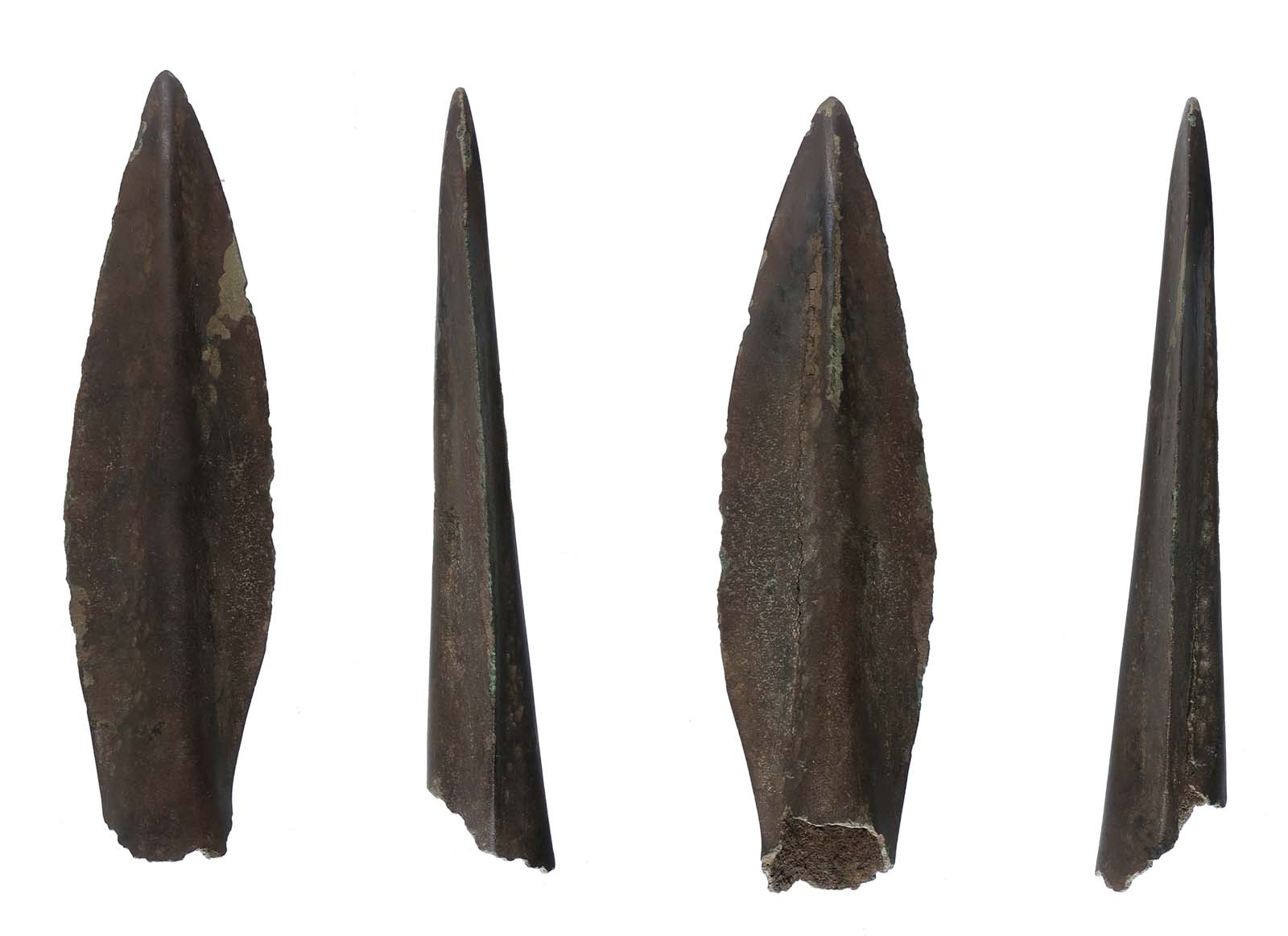 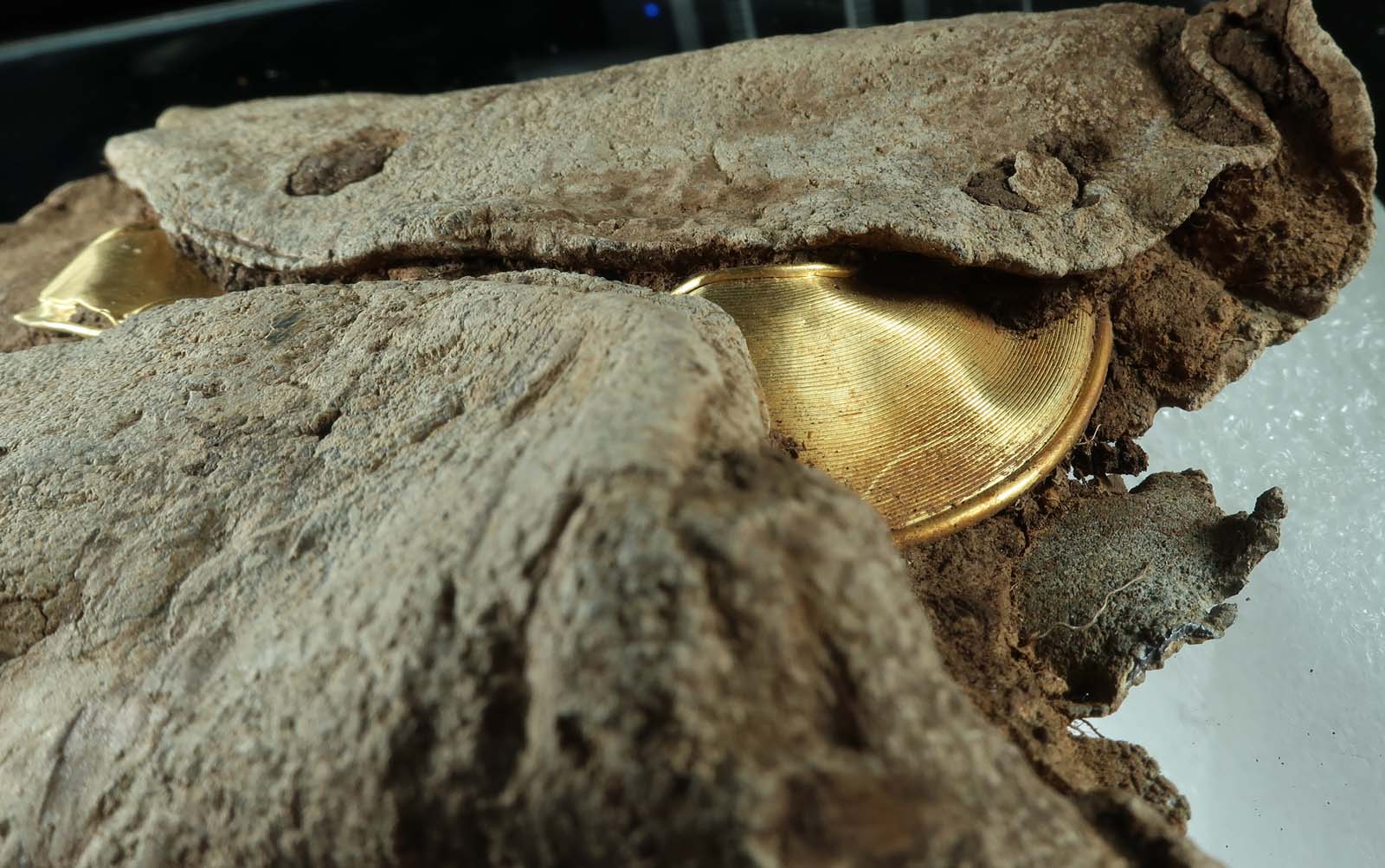 Detail of the of the gold rings encased by lead. Courtesy Birmimgham Museum Trust 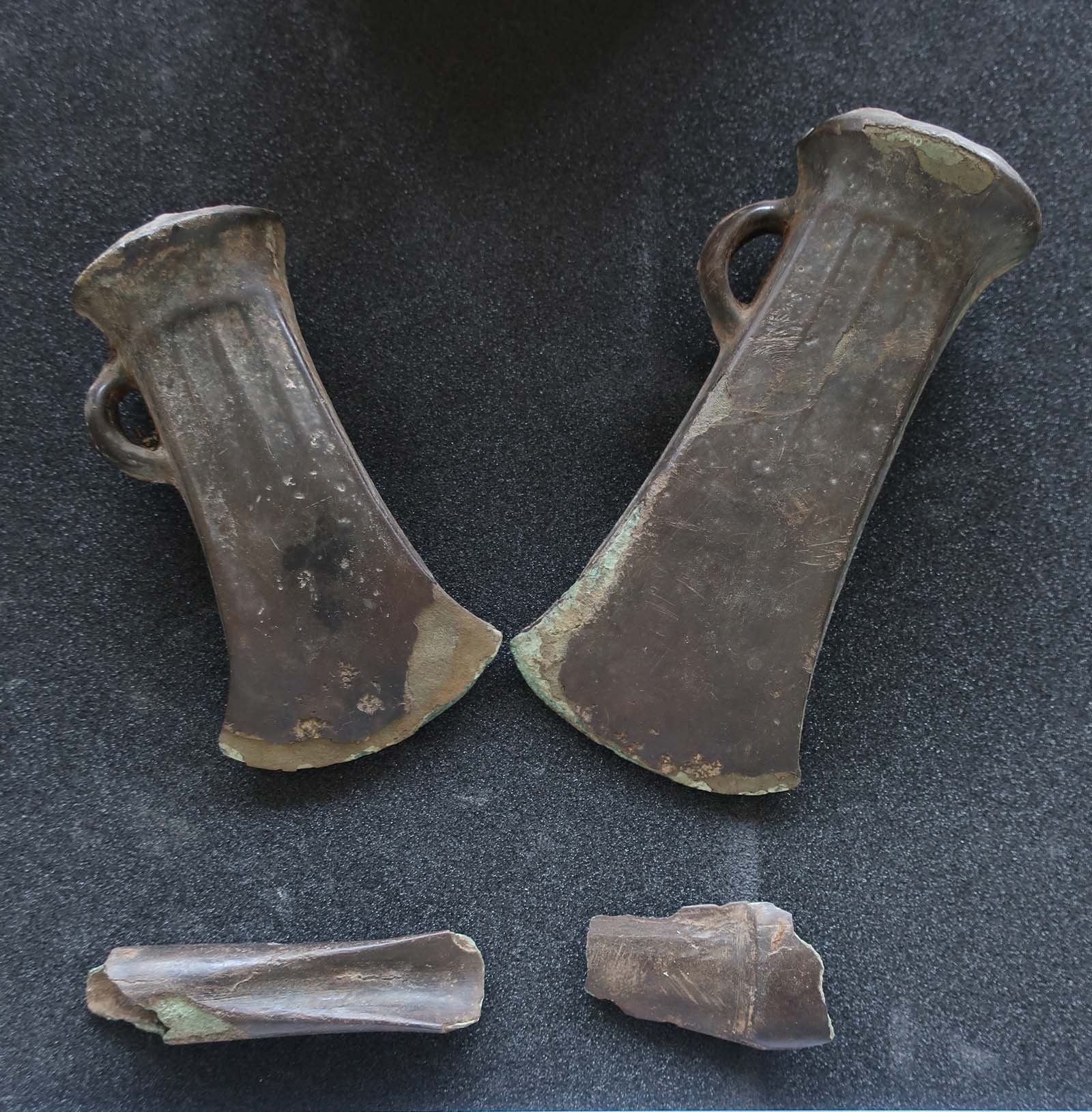 At the same time, Shrewsbury also hopes to acquire other archeologically significant Bronze Age objects from the same findspot and is launching a crowdfunding campaign to display them alongside the sun pendant.

The other objects will help tell the complete story of ancient Shropshire, give visitors an insight into the full historic story of the local Bronze Age landscape and an opportunity to admire their extraordinary craftsmanship close to where they were deposited and found thousands of years later.

“The Shropshire sun pendant is an unparalleled find of International significance,” says Fay Bailey, Shropshire Museums Manager. “The discovery of this exceptional object and associated finds helps to deepen our understanding of Bronze Age Britain and confirms that Shropshire has an important story to tell.”

Associated finds include an exceptionally rare jewellery parcel wrapped in lead, which is believed to be one of the first records of using this material, together with hoards which have the potential to date the transition between Bronze and Iron Ages.

The museum will need to raise £40,000 as the reward value of these Treasure objects so it can then preserve and display them to the public. 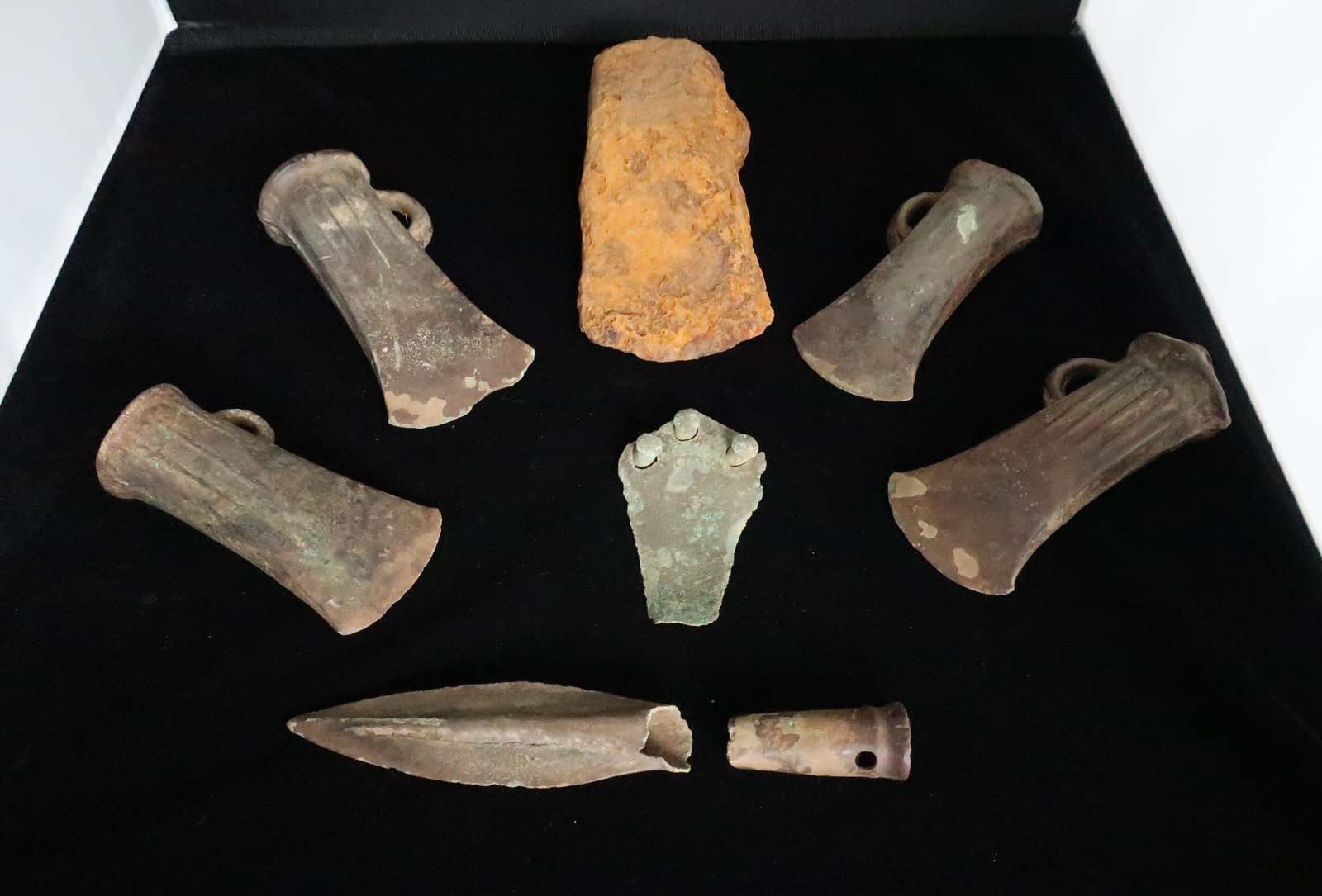 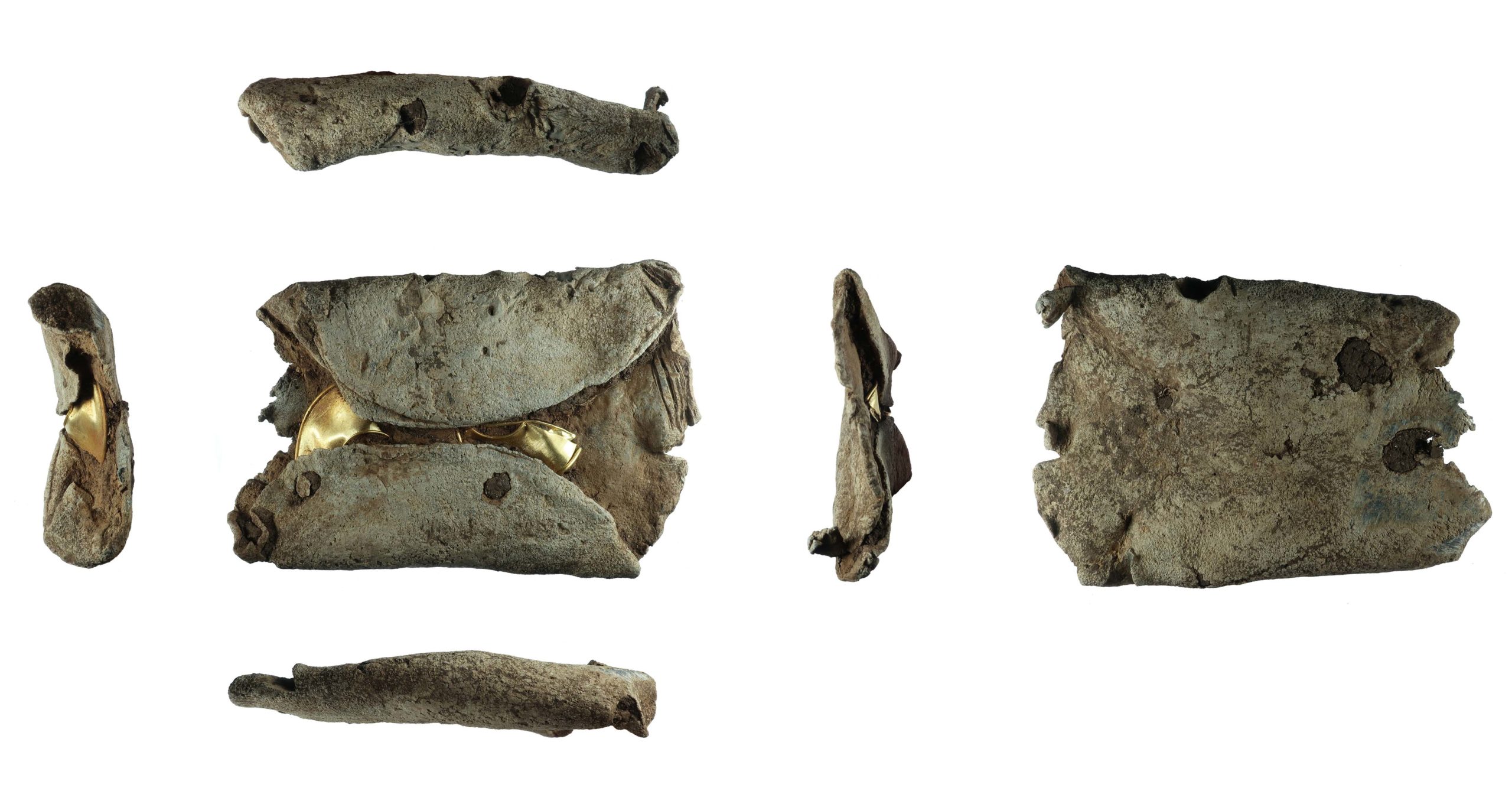 Views of the lead covered rings. 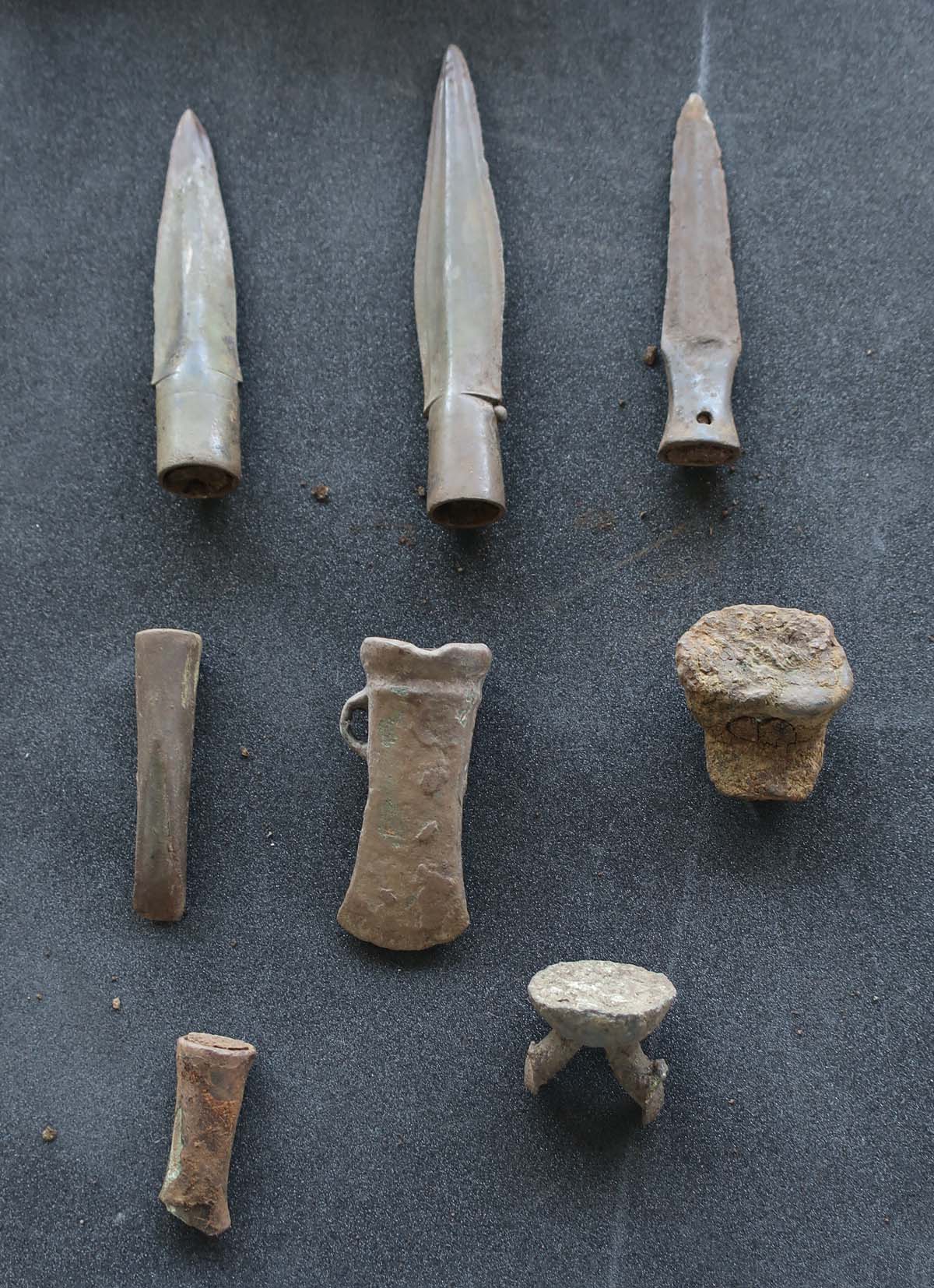 The unusual lead parcel contains two exquisite gold ‘lock-rings’, which were likely worn as jewellery in hair or clothing. Found close to the sun pendant, X-ray analysis reveals similar decoration. They are composed of the same gold and from the same period, and there appears close technological, cultural and chronological connections between the pendant and the lock-ring parcel.

The lead sheet acted as a wrap and to conceal the rings in place, and though damaging them in the act, it could also have helped ‘sink’ the light lock-rings when they were deposited in a wet and watery location with limited prospect of recovery. The lead itself may also be considered a significant sacrifice given the importance of lead in both gold and bronze working.

Lead was an important ingredient in bronze production but is rarely found in an unworked state in Bronze Age hoards – there are only ten other previous examples previously discovered. This is also the first record of this kind of lead artefact to be found in a Late Bronze Age hoard, whilst gold lock-rings themselves have only been found in relatively small numbers – less than 80 examples are known in Ireland, Britain and western France.

The combination of lock-ring and lead is completely unique to this parcel whose rarity indicates that this object is significant both culturally and archaeologically. 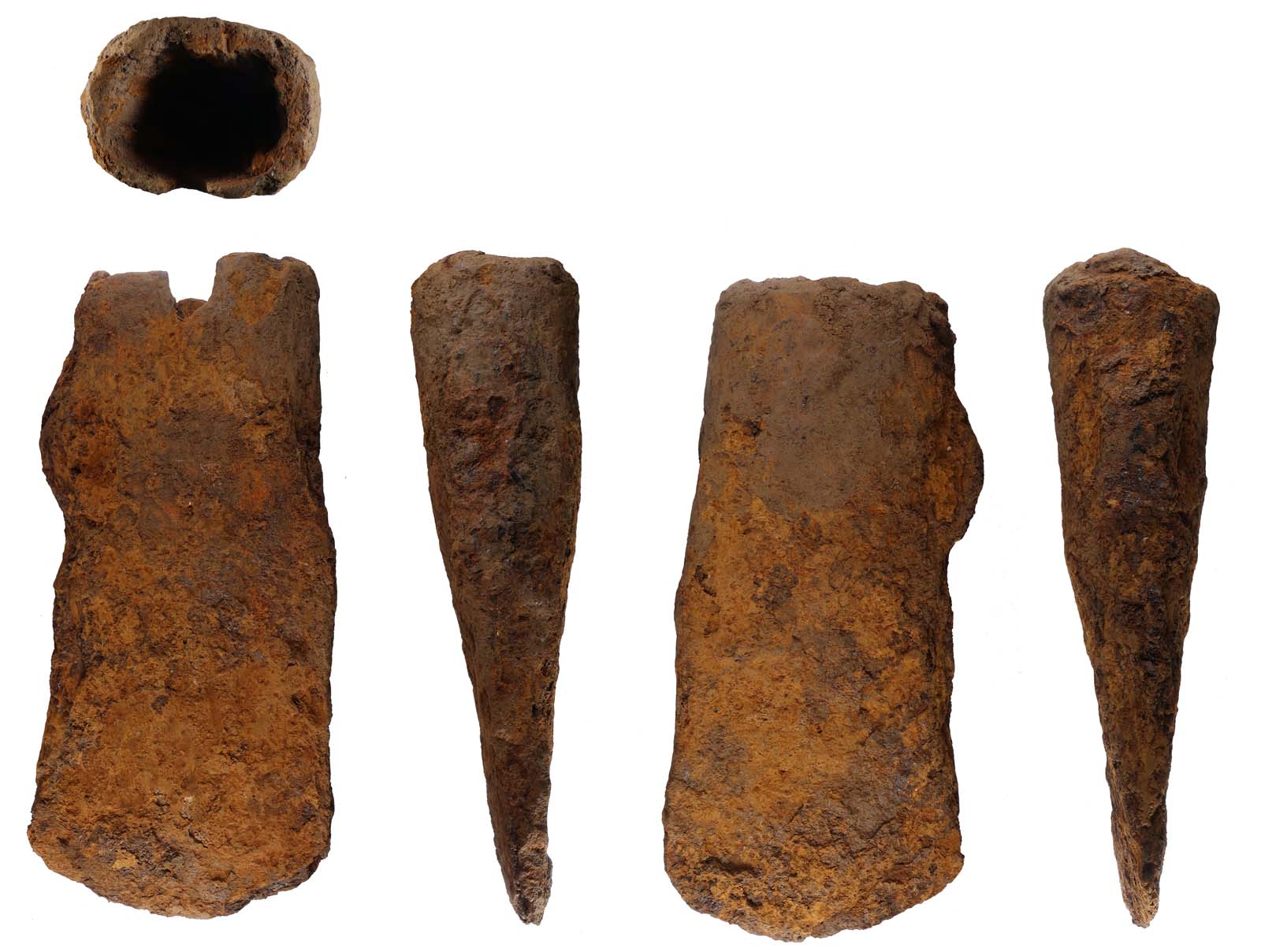 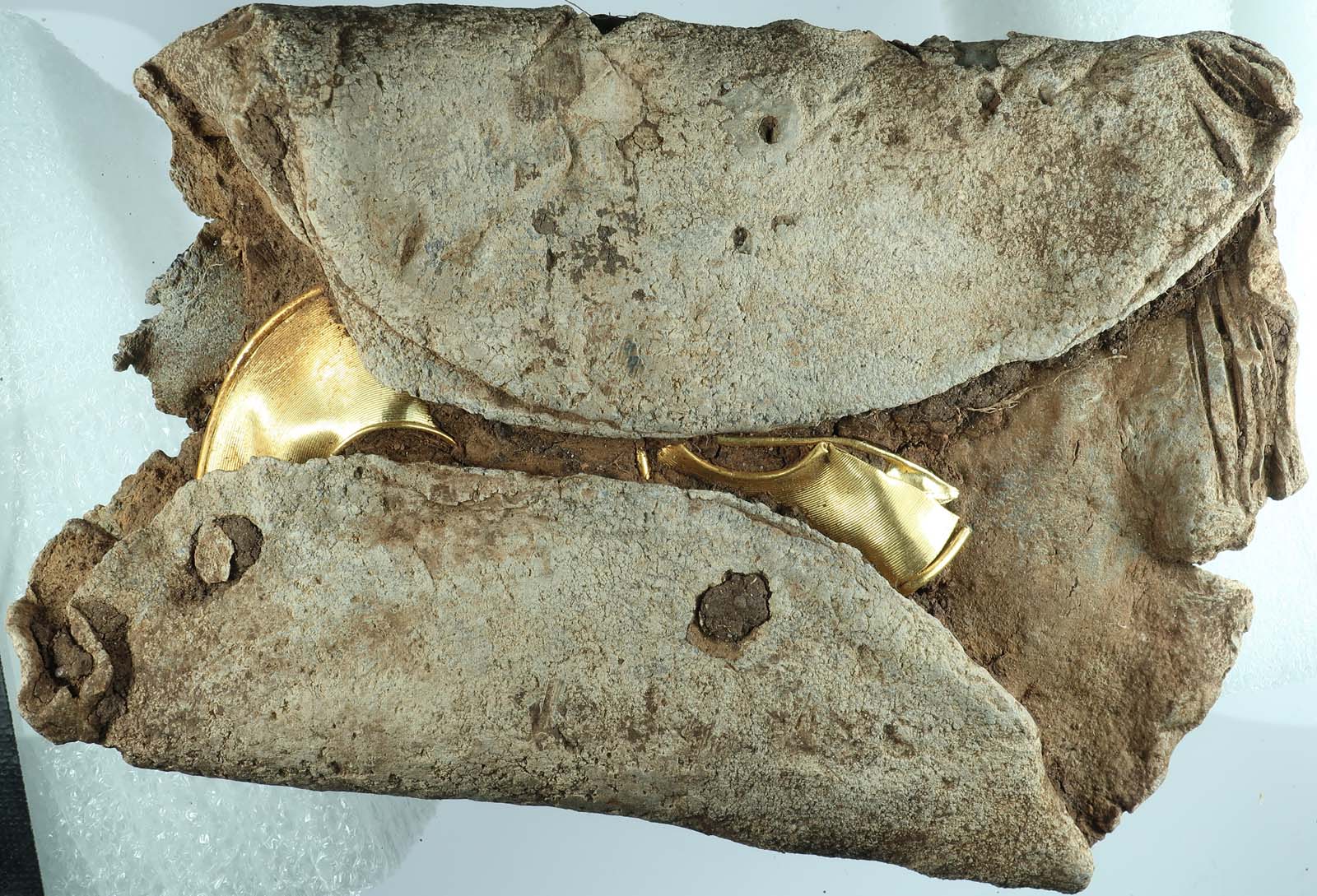 Another view of the lock rings. Courtesy Birmingham Museums Trust 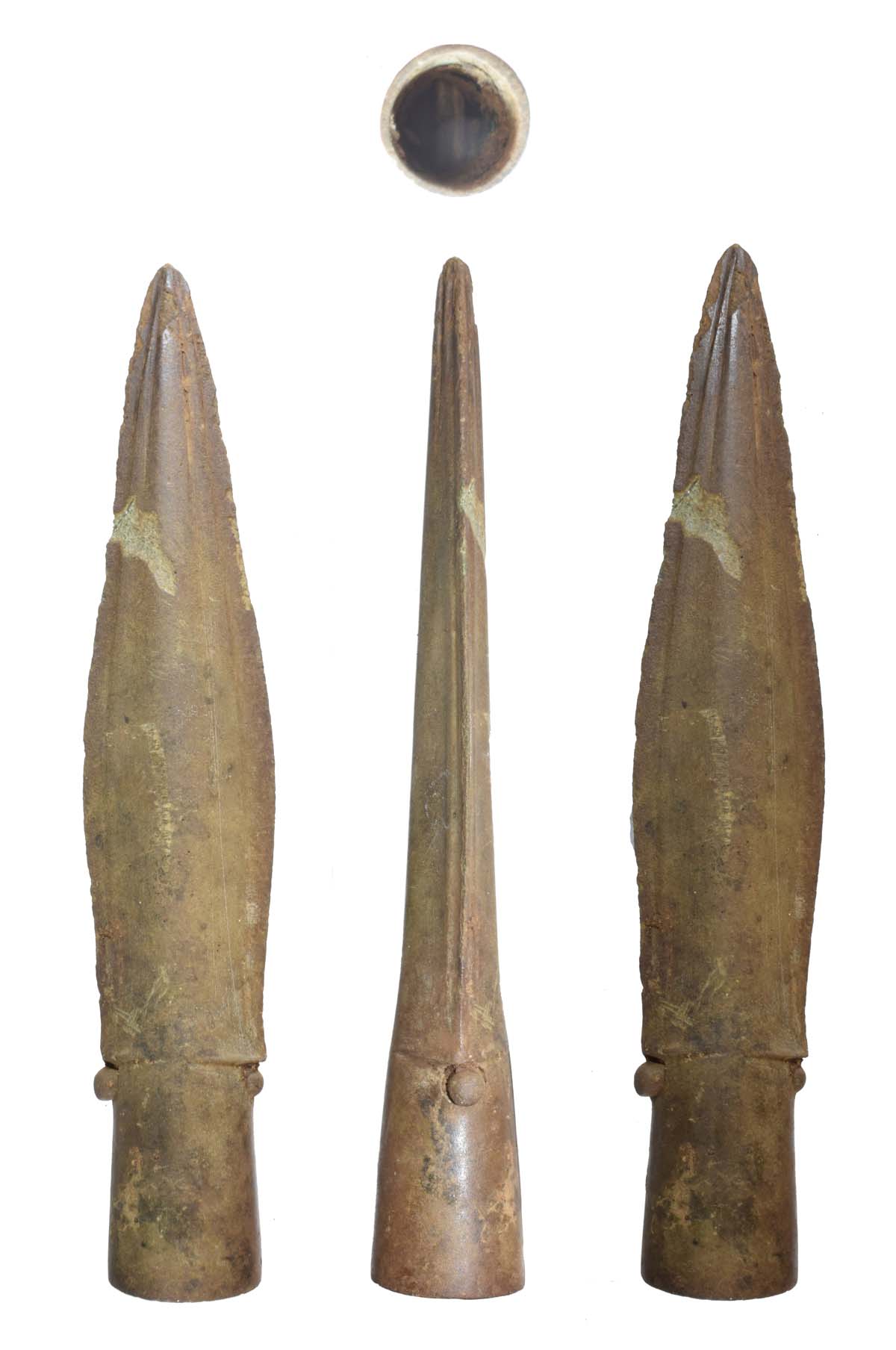 Experts believe the vast array of high-quality metalwork from the local landscape suggests that the Shropshire site was an important location for a form of religious or ceremonial activity for over a thousand years and their display will be a unique opportunity for visitors to learn about this historic site.

Further objects the museum is hoping to acquire include a rare iron axe dating the period 850 – 650 BC, which straddles the transitional period between the Bronze and Iron Ages. Organic material found with this hoard object could even provide a crucial radiocarbon date for this transition.

Objects in other hoards include a rare and well-worn cauldron handle as well as weapon fragments that demonstrate significance to our understanding of Bronze Age culture and landscape.

As for the sun pendant, it will also star in the British Museum’s forthcoming major exhibition on Stonehenge, whilst the museum is seeking three more museums to host the Spotlight Loan from late 2022 onwards as part of its commitment to share the collection as widely as possible across the country. Part of the Spotlight Loan will also include further precious objects yet to be announced.

Top view, Bronze Age sun pendant, 1000–800BC © The Trustees of the British Museum

A British Museum Spotlight Loan Gathering light: A Bronze Age golden sun will be on display at Shrewsbury Museum & Art Gallery from 10 September until 12 December 2021.

Support the crowdfunder at www.crowdfunder.co.uk/keepitinthecounty-1

Shrewsbury Museum and Art Gallery re-located to The Music Hall and Vaughan's Mansion in April 2014. It is one of the museums run by the Visitor Economy Team at Shropshire Council. The collections were founded in 1835 as the museum of the Shropshire and North Wales Natural History and Antiquarian…