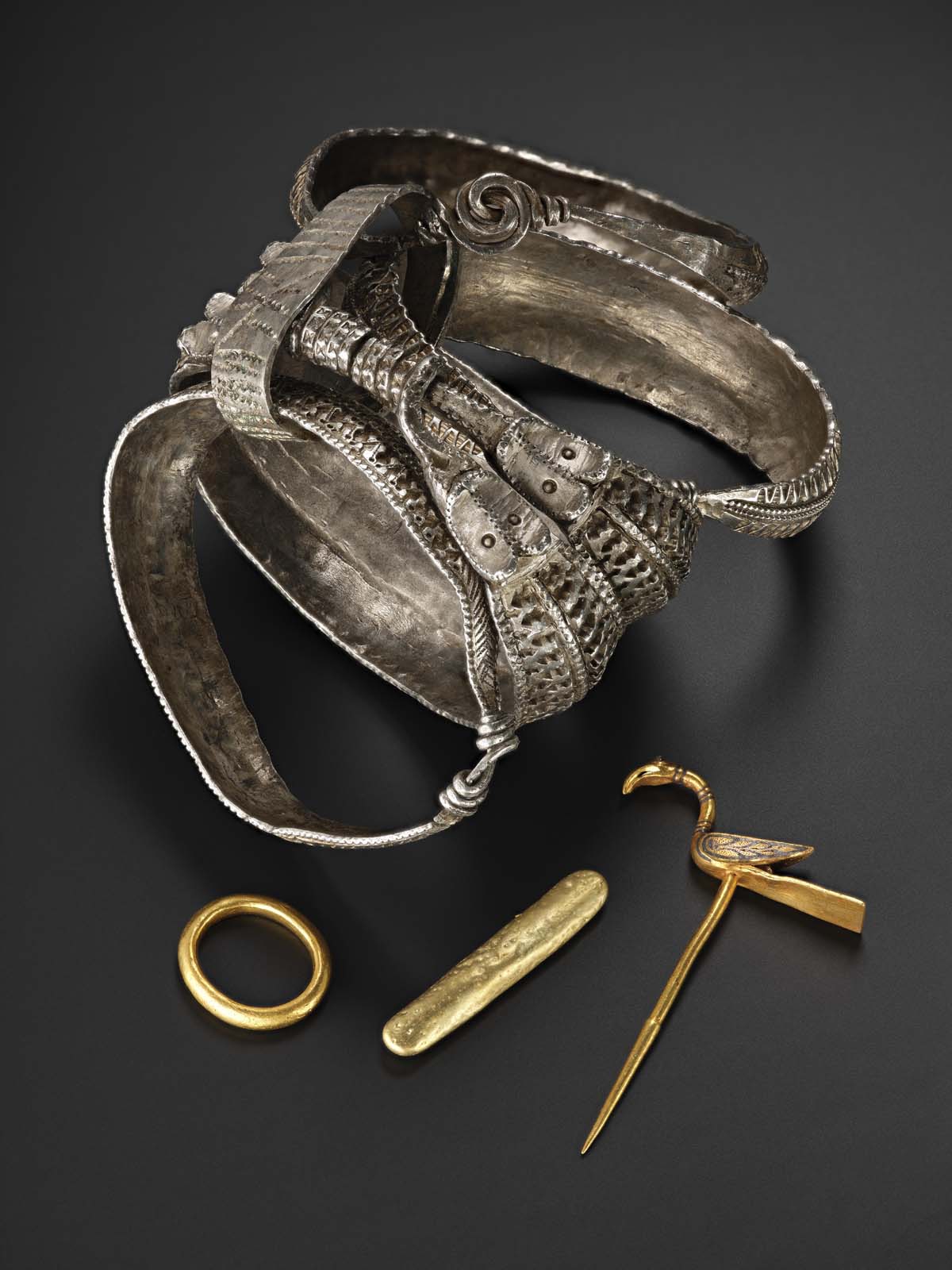 One of the most important UK archaeological finds of the century, The Galloway Hoard is about to go on display for the first time, from May at the National Museum of Scotland in Edinburgh.

Since its discovery in 2014 the Viking stash of treasure has been lauded as one of the UK’s most spectacular hoards and the eagerly awaited exhibition, Galloway Hoard: Viking-age Treasure, will offer the first chance to see details hidden for over a thousand years, revealed by expert conservation, painstaking cleaning and cutting-edge research.

Now confirmed as the richest collection of rare and unique Viking-age objects ever found in Britain or Ireland, the hoard was buried around AD900 and brings together a stunning variety of objects and materials – all in one discovery.

The exhibition will peel back the layers to show how it was buried in four fascinating and distinct parcels. 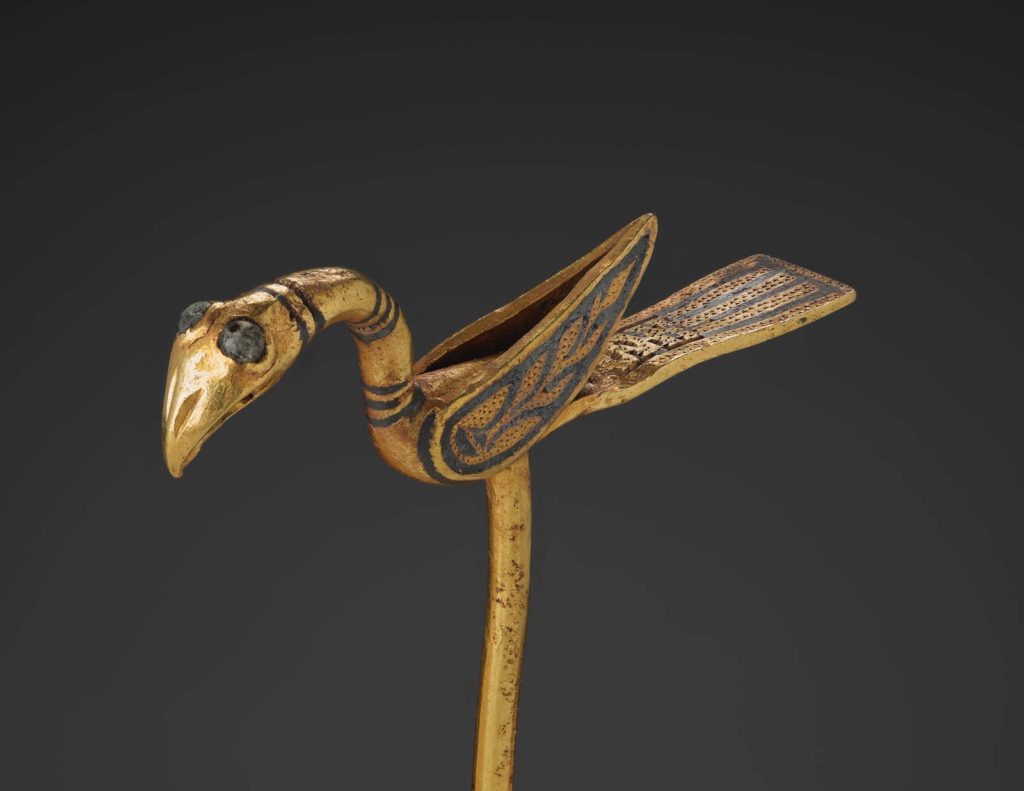 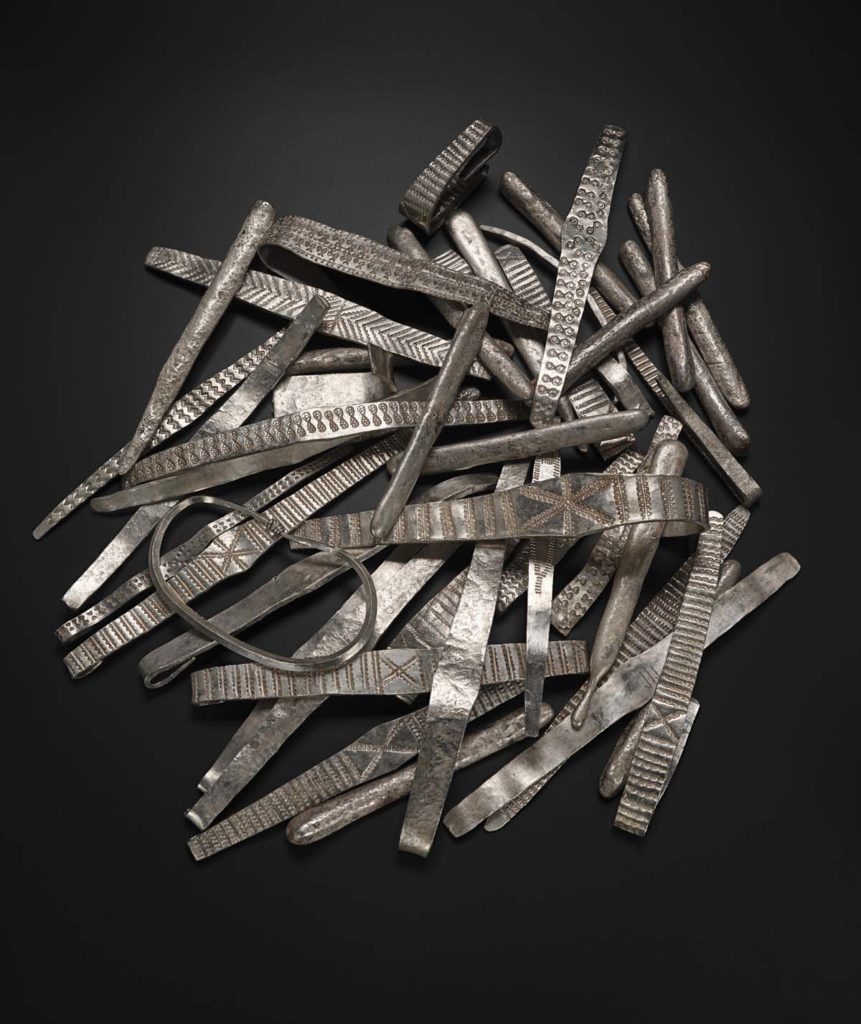 Silver bullion from the lower layer of the Galloway Hoard. © National Museums Scotland. 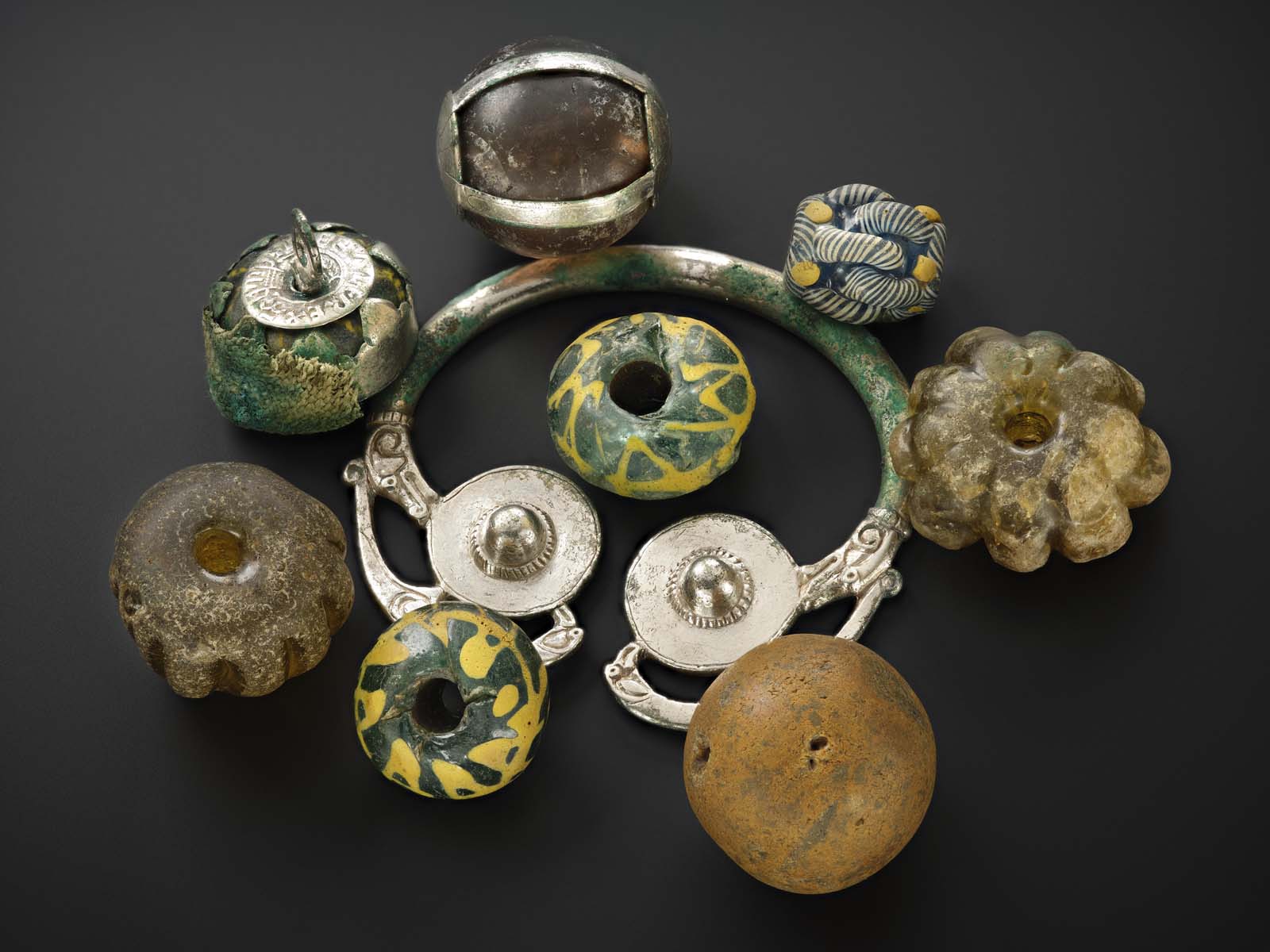 Beads, curios, and heirloom objects were bundled and strung together resting as a group on a silver brooch-hoop at the top of the lidded vessel in the Galloway Hoard. © National Museums Scotland.

The top layer was a parcel of silver bullion and a rare Anglo-Saxon cross, separated from a lower layer of three parts.

Firstly there was a parcel of silver bullion wrapped in leather which was twice as big as the one above; beneath this was a cluster of four elaborately decorated silver ‘ribbon’ arm-rings bound together and concealing in their midst a small wooden box containing three items of gold.

Beneath these a lidded, silver gilt vessel wrapped in layers of textile was found to be packed full of carefully wrapped objects that appear to be have been curated like relics or heirlooms. This final layer of treasure includes beads, pendants, brooches, bracelets, an elaborate belt-set, a rock crystal jar and other curios, often strung or wrapped with silk.

“Conservation work is allowing us to see these objects clearly for the first time, and our research so far is pointing to a new understanding of Scotland in the international context of the earliest Viking Age.”

Since it was acquired by National Museums Scotland in 2017 with the support of the National Heritage Memorial Fund, Art Fund and the Scottish Government as well as a major public fundraising campaign, the hoard has been undergoing extensive conservation and research at the National Museums Collection Centre in Edinburgh.

Discovering and decoding the hoard’s secrets has been a multi-layered process with the ongoing conservation of the metal objects revealing decorations, inscriptions and other details that were not previously visible.

An Anglo-Saxon runic inscription on an arm-ring fragment revealed the name ‘Egbert’, an Old English name rather than a Scandinavian one, leading to speculation as to whether he was perhaps a person associated with the hoard’s burial. 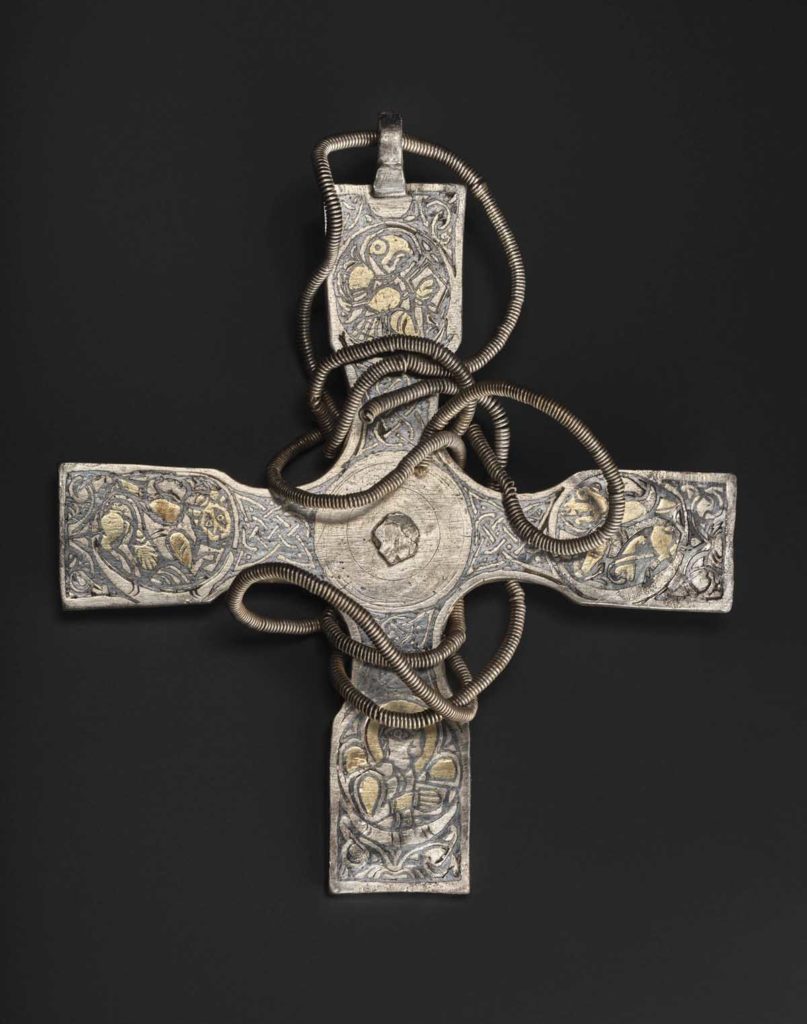 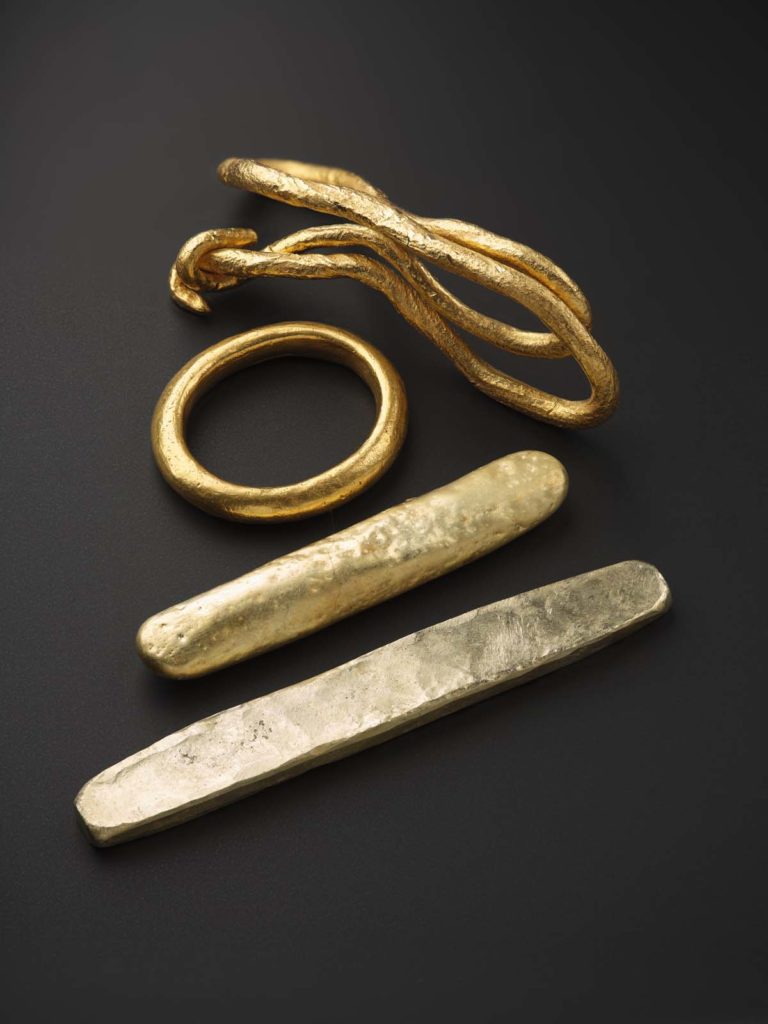 Research into many aspects of the hoard continues and will take many years. Some items are too fragile to be displayed, particularly those with rare textile survivals so the exhibition will use AV and 3D reconstructions to enable visitors to understand these objects and the work that is being done with them.

“This exhibition offers a rare ‘snapshot’, the chance to see real archaeological work in progress, both what we have learned so far and the work still to be done,” adds Dr Goldberg.

Comparison with other collections and consultation with specialists around the world has enabled deeper understanding of the hoard and scientific analysis is enabling greater precision about the date and composition of the material, which in turn offers clues to where the individual objects may have come from.

Experts now believe the hoard came from sources in Ireland, England and Viking-age Scandinavia, as well as containing objects of some antiquity from ancient Rome, and others travelling thousands of miles from as far away as central Asia. 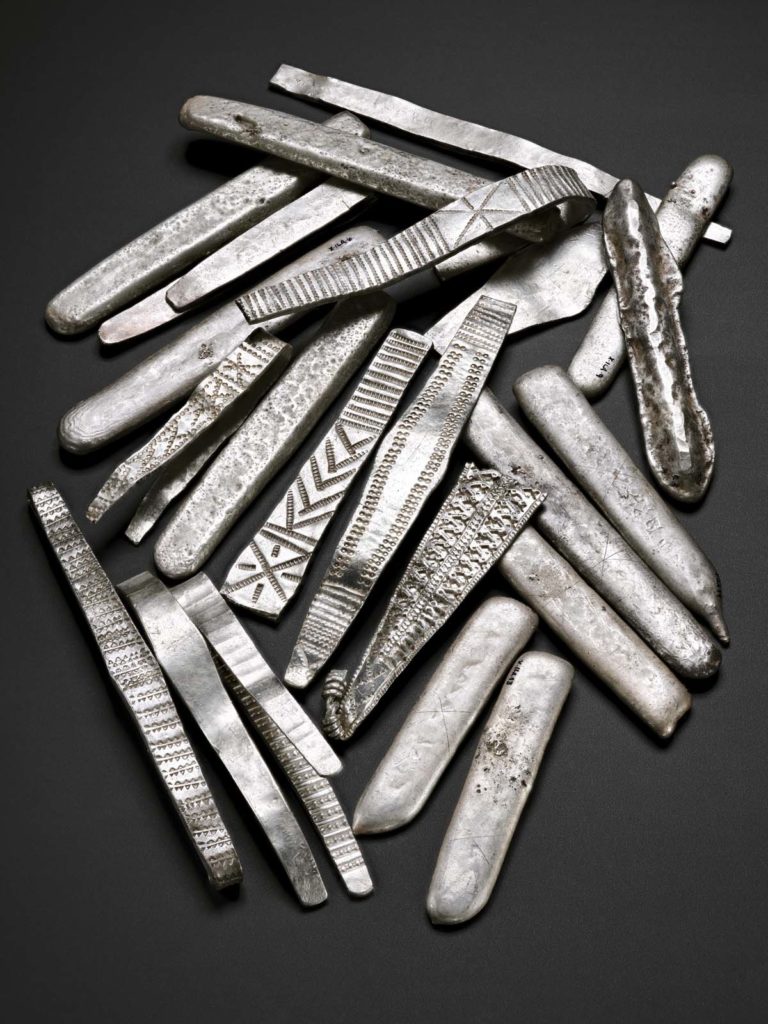 Silver bullion from the upper layer of the Galloway Hoard. © National Museums Scotland.

After its run at the National Museum of Scotland the exhibition will tour to Kirkcudbright Galleries close to where it was originally discovered (9 Oct 2021 to 10 July 2022) and Aberdeen Art Gallery (30 July to 23 October 2022).

Following the tour, research into the contents of the Galloway Hoard will continue. It will eventually go on long-term display at the National Museum of Scotland in Edinburgh with a significant and representative portion of it also displayed long-term at Kirkcudbright Galleries.

The exhibition will be accompanied by a new book detailing the most up to date research findings.

Fire your imagination at the National Museum of Scotland, one of the UK’s top 10 visitor attractions. Our diverse collections will take you on a journey of discovery through the history of Scotland, the wonders of nature and world cultures – all under one roof. From meteorites to monsters from…