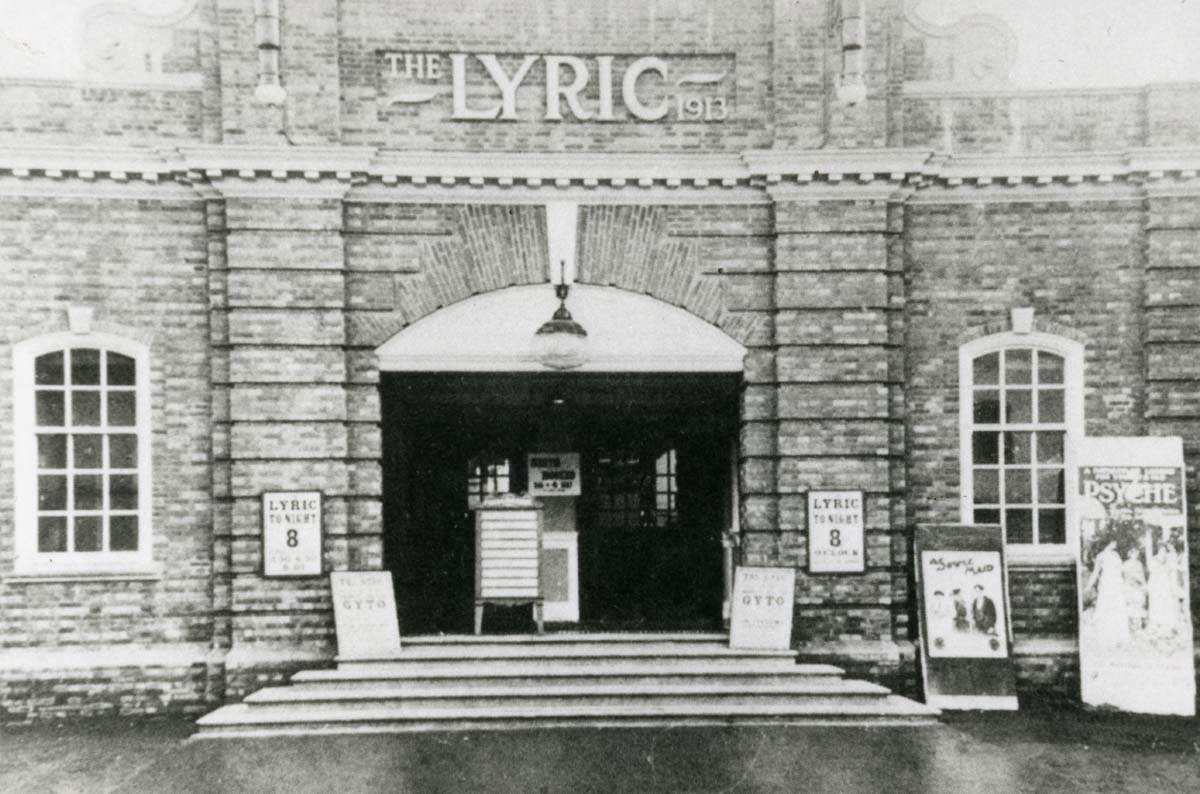 The story of the rise, fall and rebirth of cinema-going in our small towns is one of those histories that seems consistent across Britain.

During the early twentieth century thousands of cinemas opened in Britain and by the outbreak of the First World War, virtually every town had at least one permanent picture house.

There was another boom in cinema building in the 1920s and 1930s and audiences built steadily until the late 1950s when the unstoppable rise of TV began to sound the death knell for many of the cinemas in smaller towns.

But just like the ebb and flow of technology and fashion the cinema is making a revival in smaller towns. 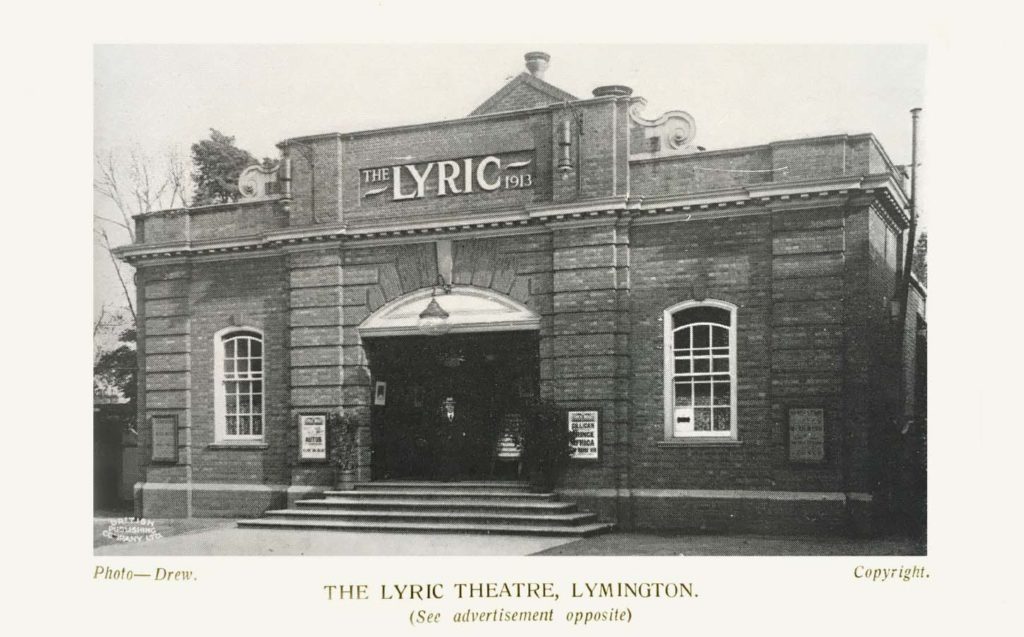 The Lyric Theatre from a guide book produced by estate agents Hewitt and Co to promote residential attractions of Lymington, c.1930. Courtesy of St Barbe Museum and Art Gallery 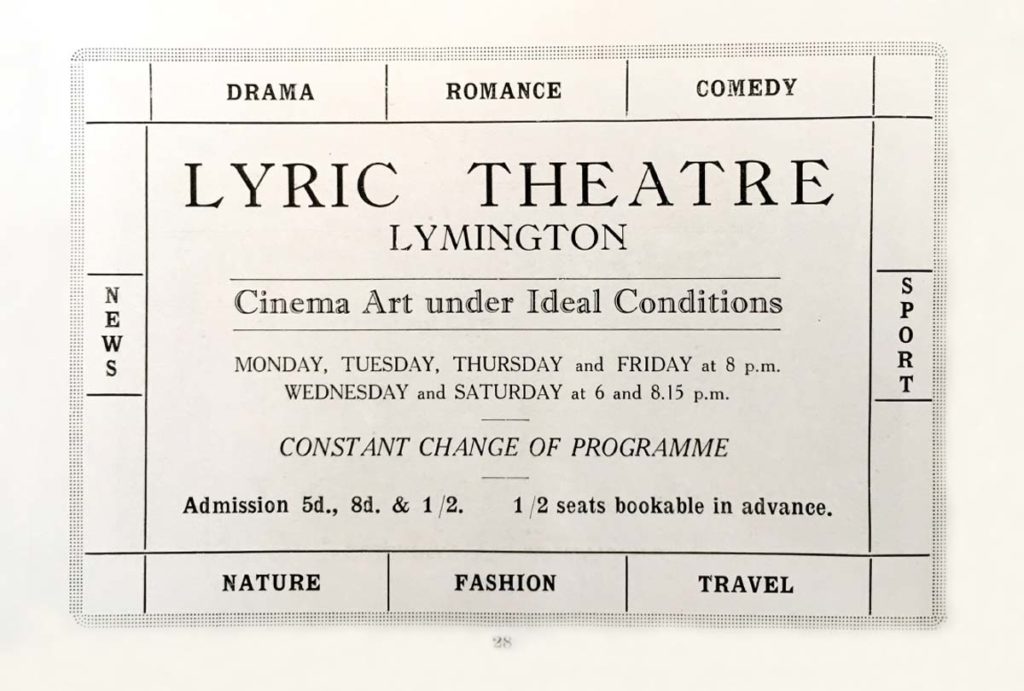 Advertisement for The Lyric Theatre from a guide book produced by estate agents Hewitt and Co to promote residential attractions of Lymington, c.1930. 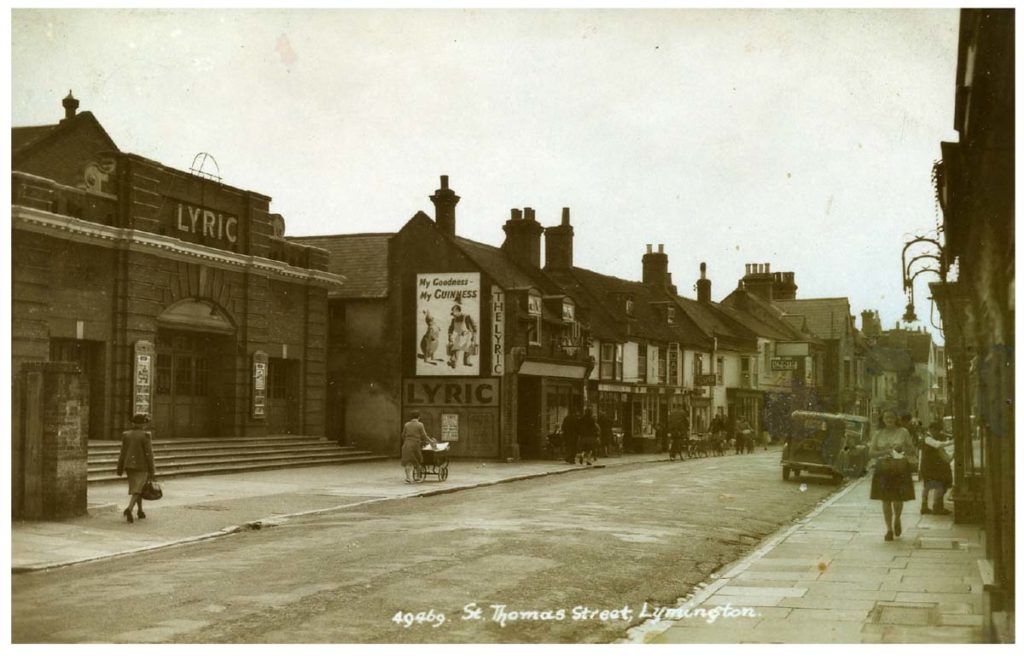 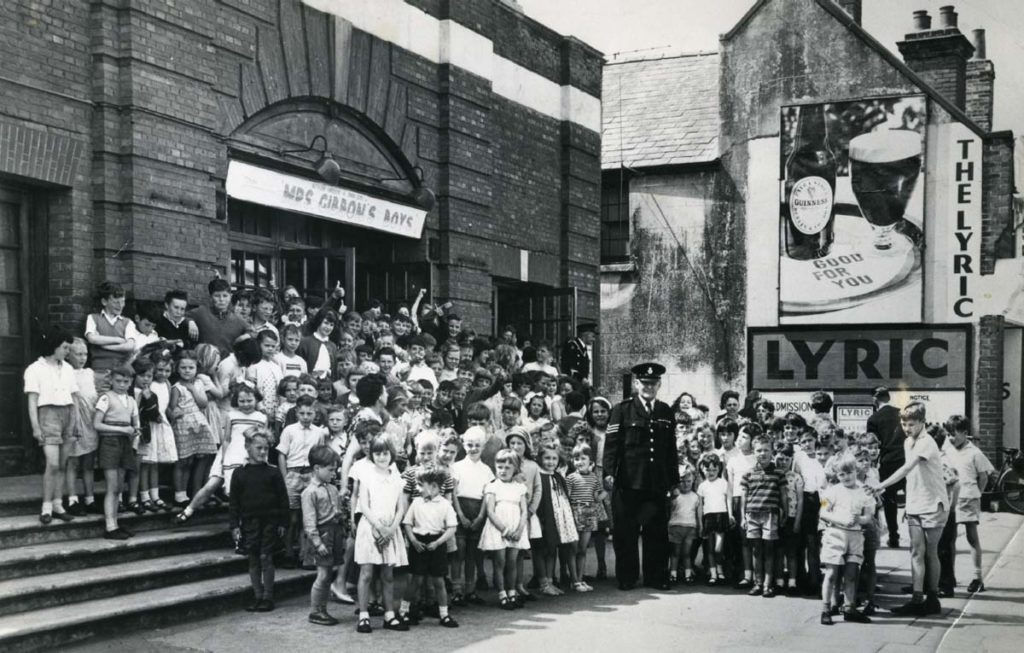 At St Barbe Museum in the New Forest coastal town of Lymington, they have been exploring their own version of this narrative with the help of locals who attend the museum’s popular tea and memory sessions.

The sessions, which as well as providing a service to the local community and addressing issues like social isolation, offer valuable insights into the collection and show that to really get inside local social history you need to talk to local people about their experiences.

With the help of staff and volunteers, memories have been fired by the St Barbe Museum collection of local cinema-related ephemera and photography, which really captures the excitement and sense of community of twentieth century cinema going. The memories, insights and collection are then shared in window displays and via and in-gallery digital display.

“Our strength in the collection is old photos and we have a lot of pictures of the old cinemas in Lymington and surrounding villages,” says Collections Officer Rosalyn Goulding. “We have got lovely photos of matinees, and it’s the usual story for a small town in that you get your cinema and then it finally closes. But that’s not quite the end of the story in Lymington.” 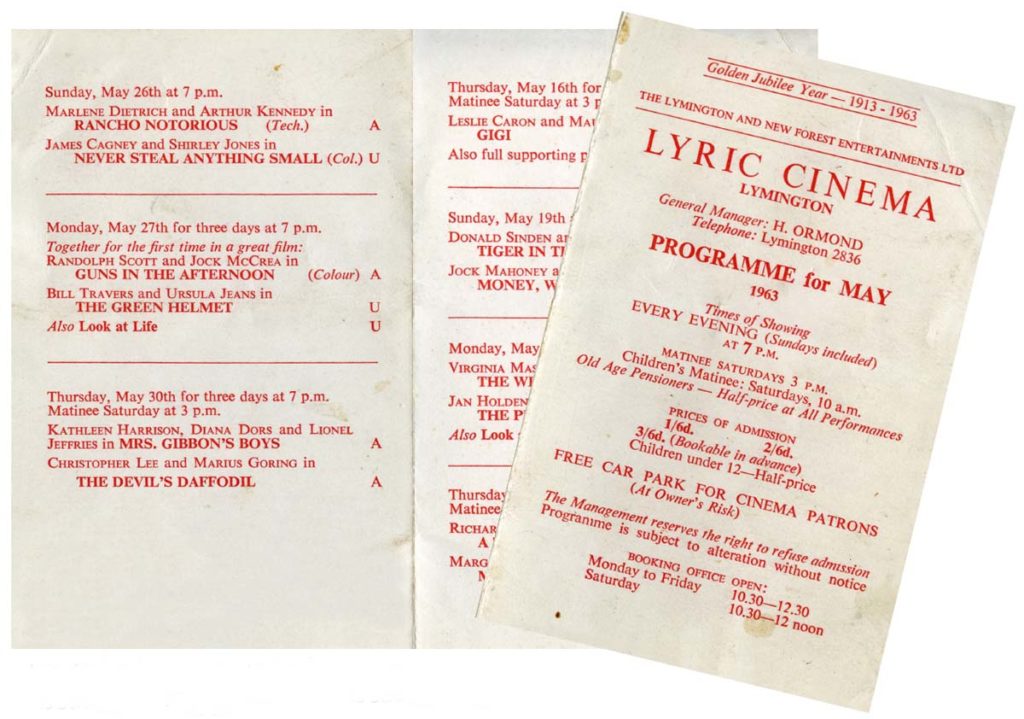 Last film programme for May 1963 before closure of The Lyric Cinema, St Thomas Street, Lymington. Courtesy of St Barbe Museum and Art Gallery 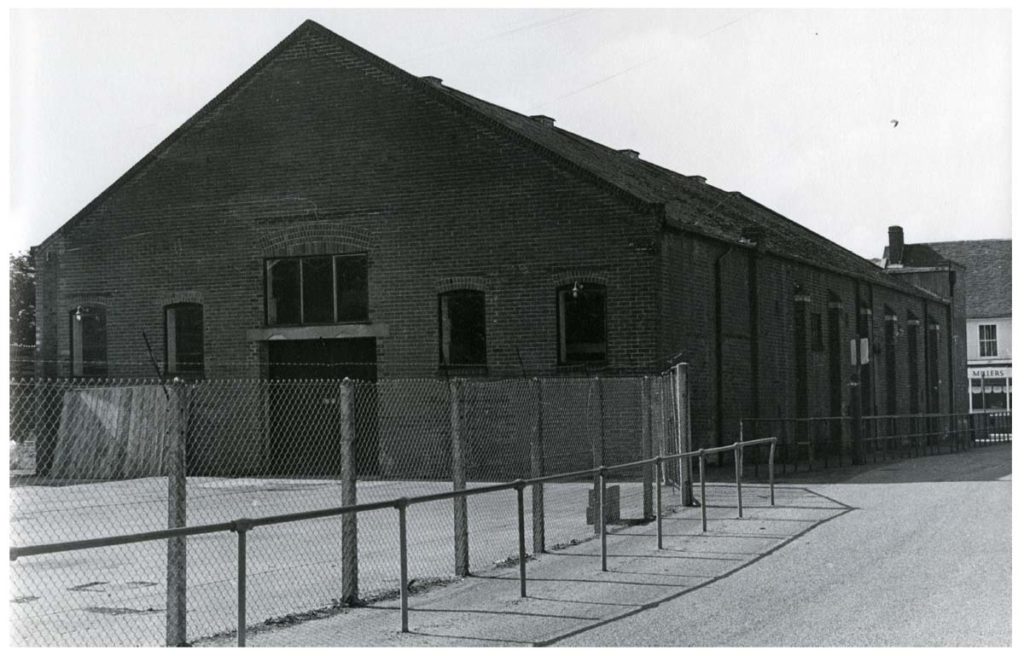 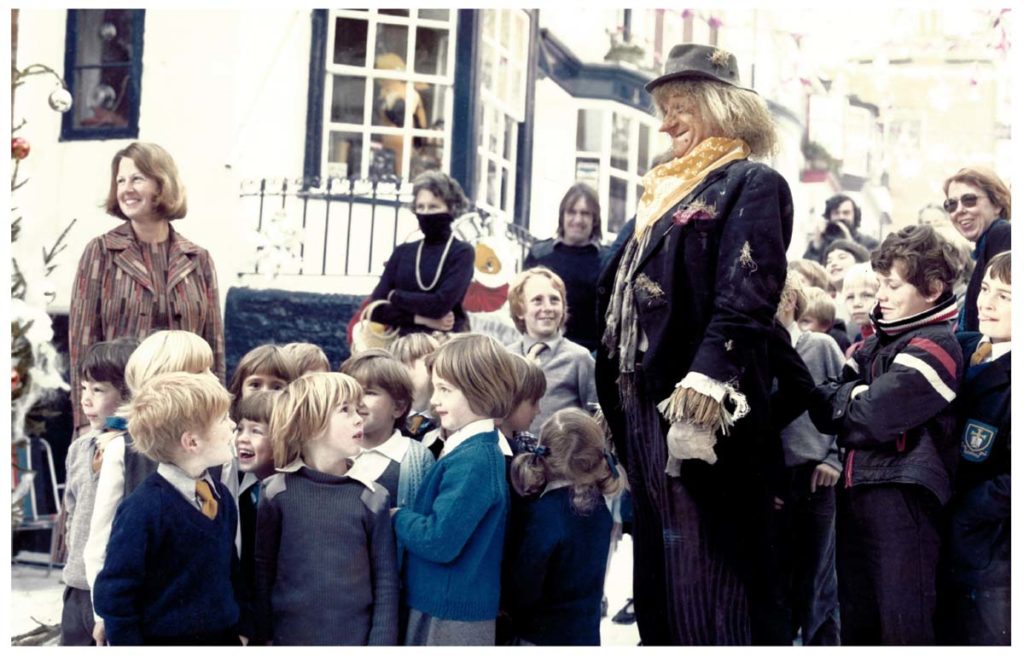 The rise of TV sounded the death knell for local cinema in many small towns. Here the brilliant John Pertwee as television scarecrow character “Wurzel Gummidge” entertains a group of children at the bottom of Quay Hill, Lymington, c.1980s.

The small Malts Cinema, whose screenings regularly sell out at the local community centre, is leading the cinema revival in Lymington, but the story of cinema-going in the town began with The Lyric Theatre and Cinema in St Thomas Street.

Built on the site of a garden called Woodlands, it opened in December 1913 with seating for 510 and a stage 20 feet deep. It also staged local entertainments by organisations like the Lymington Philharmonic Society.

With so many young men called up for the First World War, it incurred a loss during its first year but by the advent of the ‘talkies’ in the late 1920s and the installation of a new Mihaly Perfectone sound system, the Lyric began to flourish and in 1935 the seating capacity was increased to 775. Long queues were an almost daily occurrence both during and shortly after the Second World War. Then in the 1950s it was equipped with a CinemaScope wide screen.

“I had one chap who said that his grandmother died in the cinema whilst watching a film.”

However, with the proliferation of domestic television from the mid 1950s, cinema audiences declined and the Lyric closed its doors for good in June 1963. The site is now occupied by a Marks and Spencers food store.

For many older residents cinema going was however central to their lives. “The people loved looking at these old pictures and many of them were locals so they were talking about their memories of going to the local cinema,” adds Goulding. “I had one chap who said that his grandmother died in the cinema whilst watching a film. And I thought oh no, this is a sad story, but no, it wasn’t; she was laughing so much that she had a heart attack and he thought that was a good way to go.

“Lots of people have these stories, there was the one where the husband used to drop his wife at the cinema, go over to the pub, and then pick her up at the end.”

Other memories captured by the team at the museum included Mr Ewinton who remembered going to the back row of the Lyric with his future wife and father in law alongside.

Janet Irvine (Nee King) remembered The Lyric Cinema where Mr Simmons stood outside in his braided coat as the queues to get in went all the way round the front and down the side of the building during and after the War.

“The film programme changed twice a week and there was always a full programme, not just the main feature,” she added. “There would be adverts, a newsreel, a travelogue, forthcoming attractions, often a cowboy film and then the main feature.”

Janet’s father would only go if it was a film that would make him laugh. 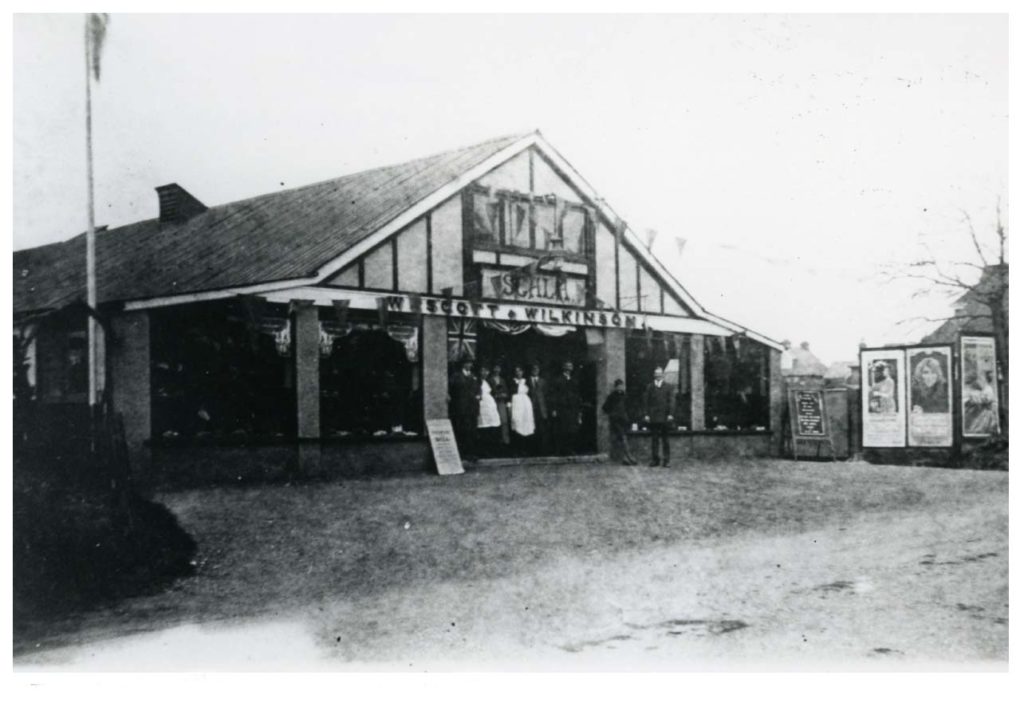 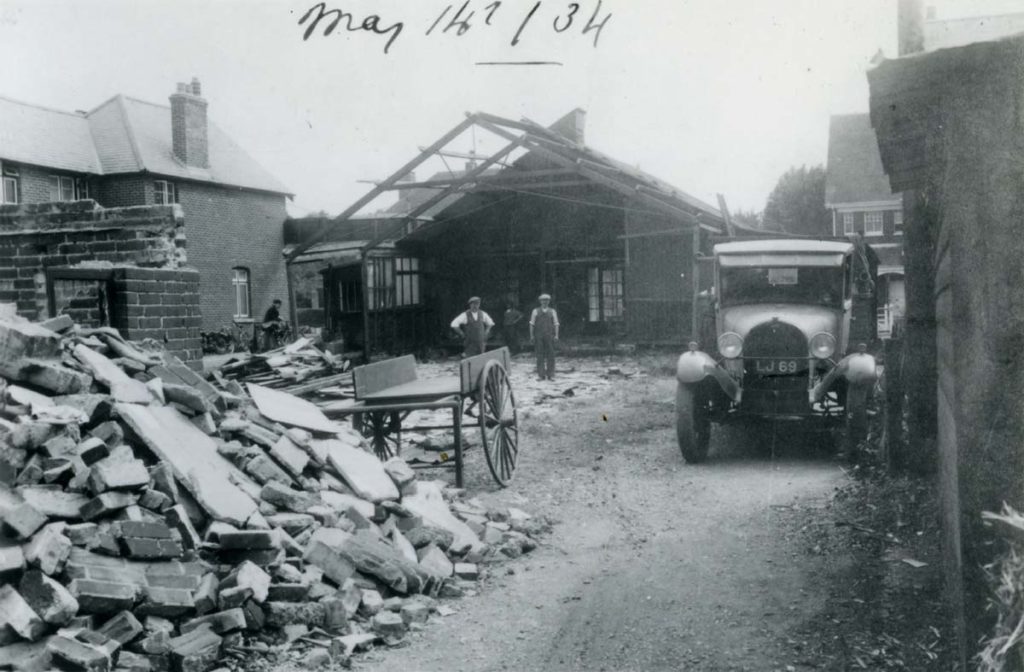 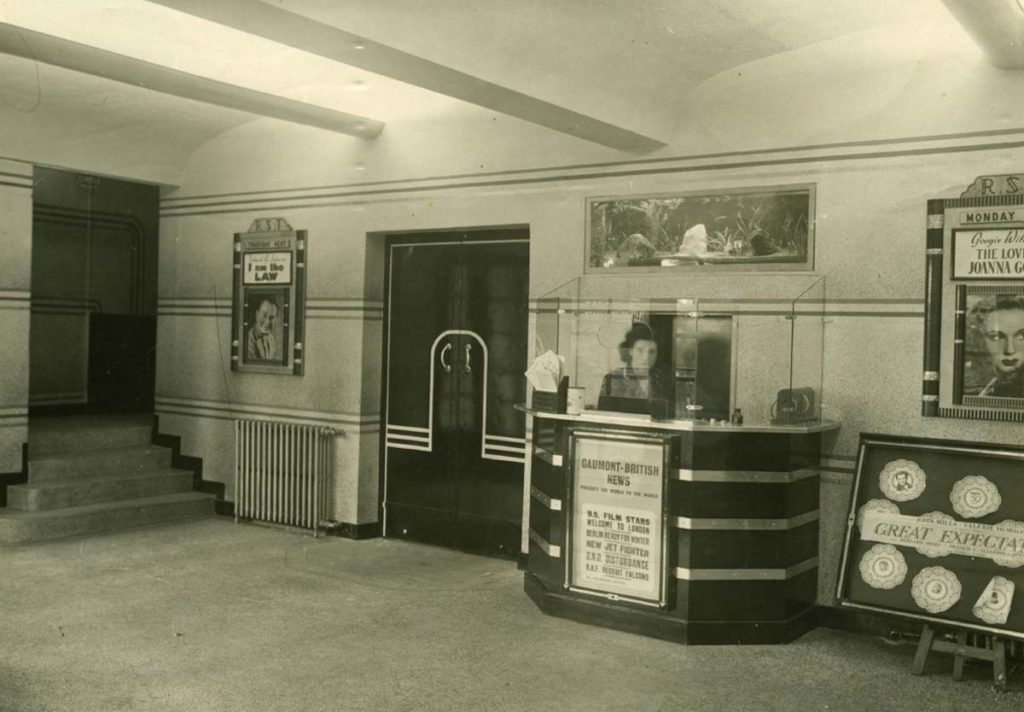 The Foyer of the Waverley Cinema New Milton. Courtesy of St Barbe Museum and Art Gallery

Shirley Tom remembered the Lyric in the 1950s and said “You either met your boyfriend there or got rid of him there.” She also remembered if it was an A certificate film and they needed to be accompanied, how they would wait on the steps until an adult would agree to take them in. One popular local, Granny Brown, used to ‘accompany’ dozens of kids to the pictures in this way.

Shirley went every Wednesday at 5pm. It cost 6d for children, 1s 6d for adults, and 3s 6d for the back row.

“It seemed to be a big part of what people did in the area and there wasn’t much to do in the area and it still happens today,” says Goulding. “The Lyric closed in 1963 and the Malt arrived in 1981 so there was a period when we didn’t have a cinema. But now the Malt Cinema sells out very quickly so people are still very pleased to have a local cinema on the doorstep.”

As well as the films and the old cinema building, people also had strong memories of the manager, Mr Woodford, and the cashier, Mrs Jenvey. One visitor remembered how if the film broke down, as it did from time to time, “there would be slow handclapping or stomping of feet with poor John Woodford trying unsuccessfully to make everyone keep quiet until normal service was resumed.”

“If you were banned for bad behaviour, or if the film was an X or A too old for you, mates would let you in at the bottom doors when no one was looking but you usually got found out.”

In nearby new Milton there were two cinemas; The Scala Cinema, which was originally an army hut in Christchurch, was erected in Station Road North in 1919 and bore the name ‘Westcott & Wilkinson’ from May 1921. The Cinema closed in 1929, although it was used for stage performances until its eventual demolition in 1934.

The Waverly Cinema to the south in Station Road, on the corner with Barton Court Road, then opened on November 5 1929. Every Saturday morning, it showed a children’s programme, which generally consisted of an exciting main feature, cartoons and a Pathé News film. When the children’s behaviour got bad enough for the performance to be stopped, the manager went on stage to threaten sending them home if they didn’t behave.

The cinema closed on 17 September 1972, the final film being Those Magnificent Men in their Flying Machines. The cinema was then demolished to make way for sheltered housing. 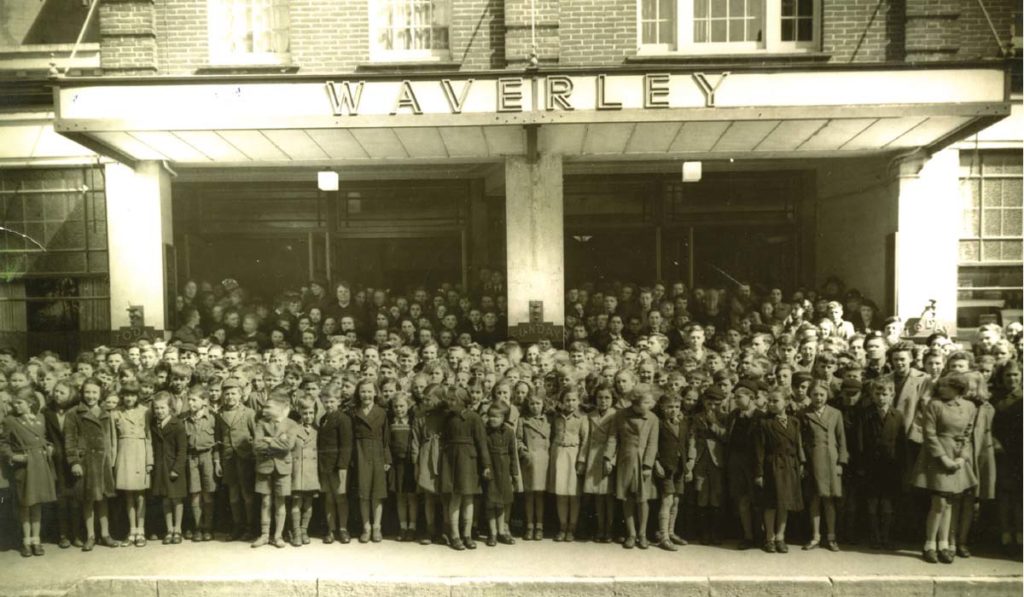 Children’s event at the Waverley Cinema, New Milton, late 1940s or early 1950s, inscribed on back ‘servicemen to all the children’. Courtesy of St Barbe Museum and Art Gallery 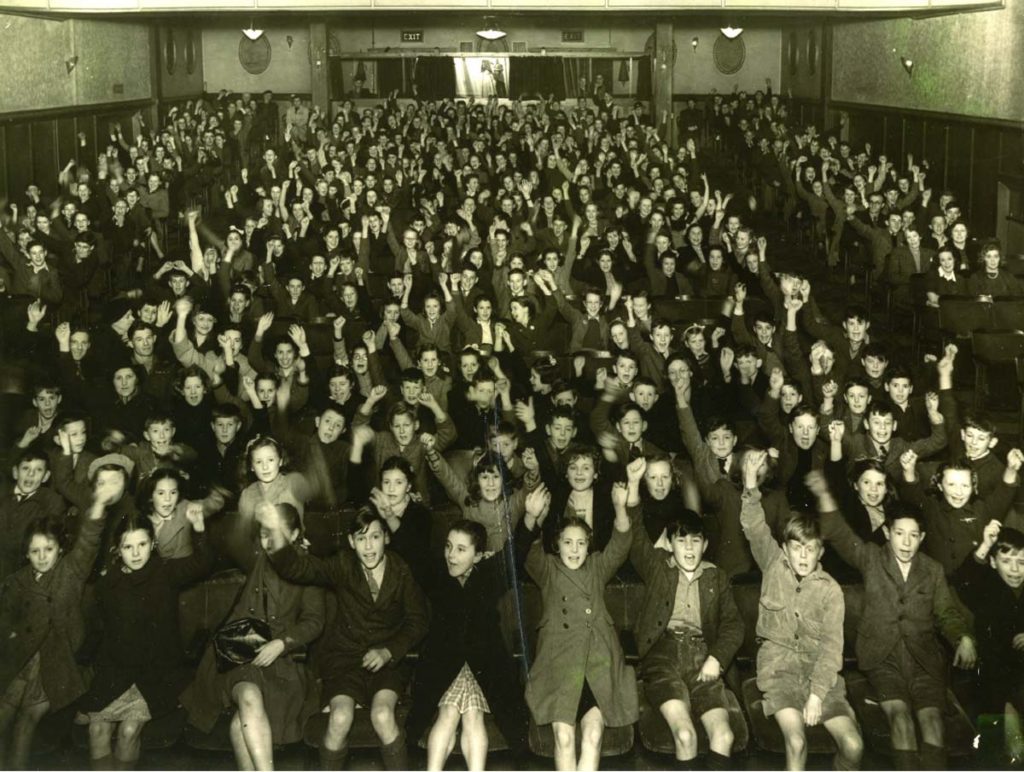 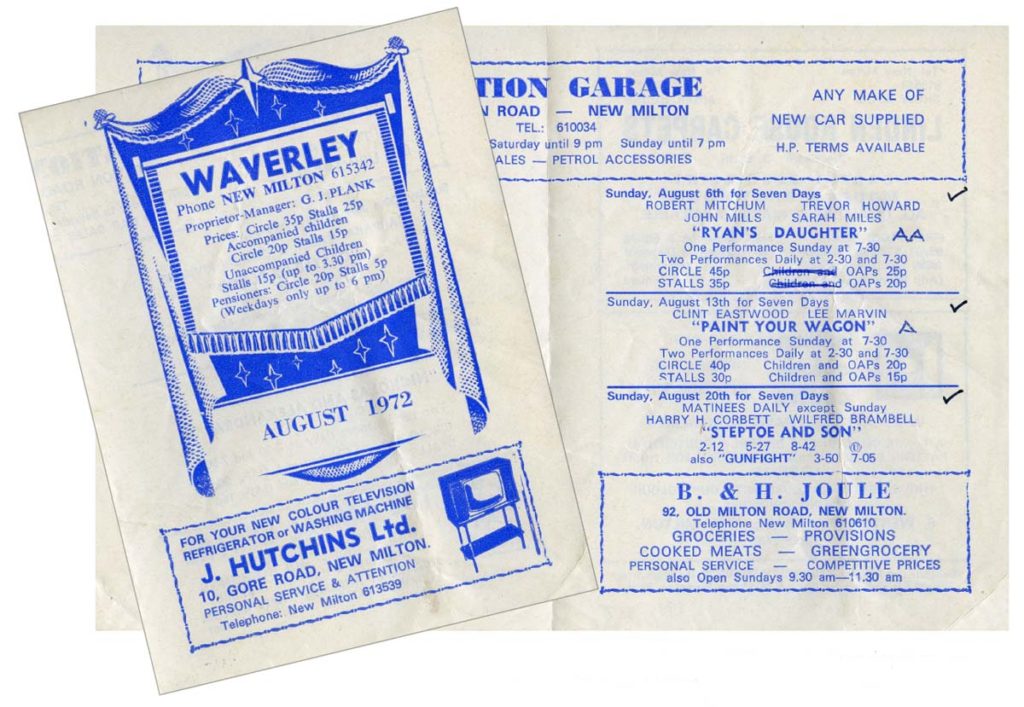 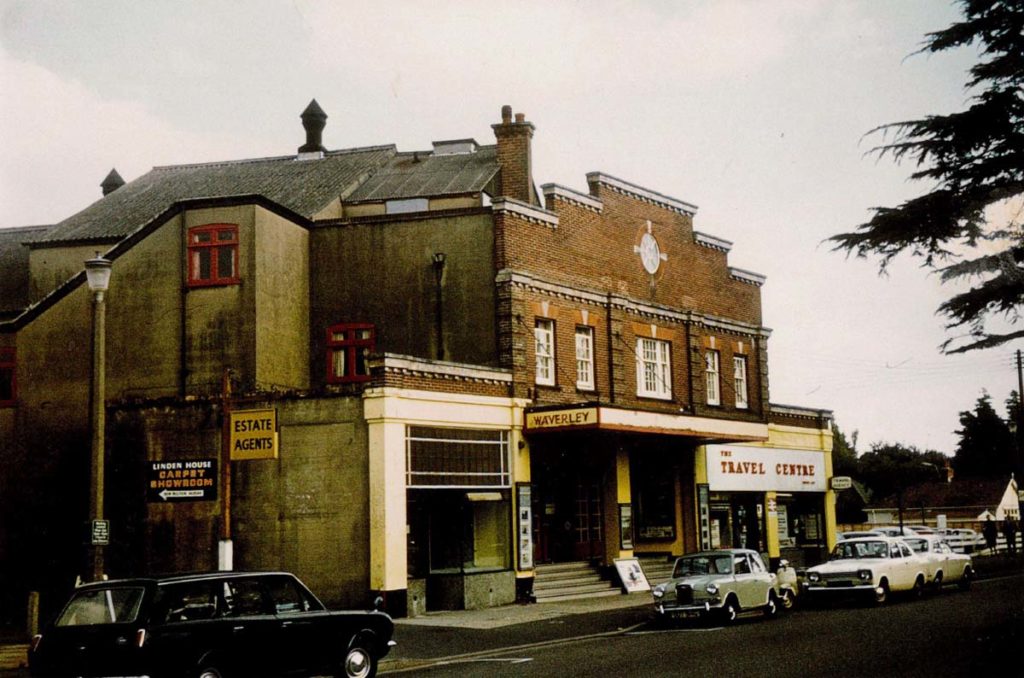 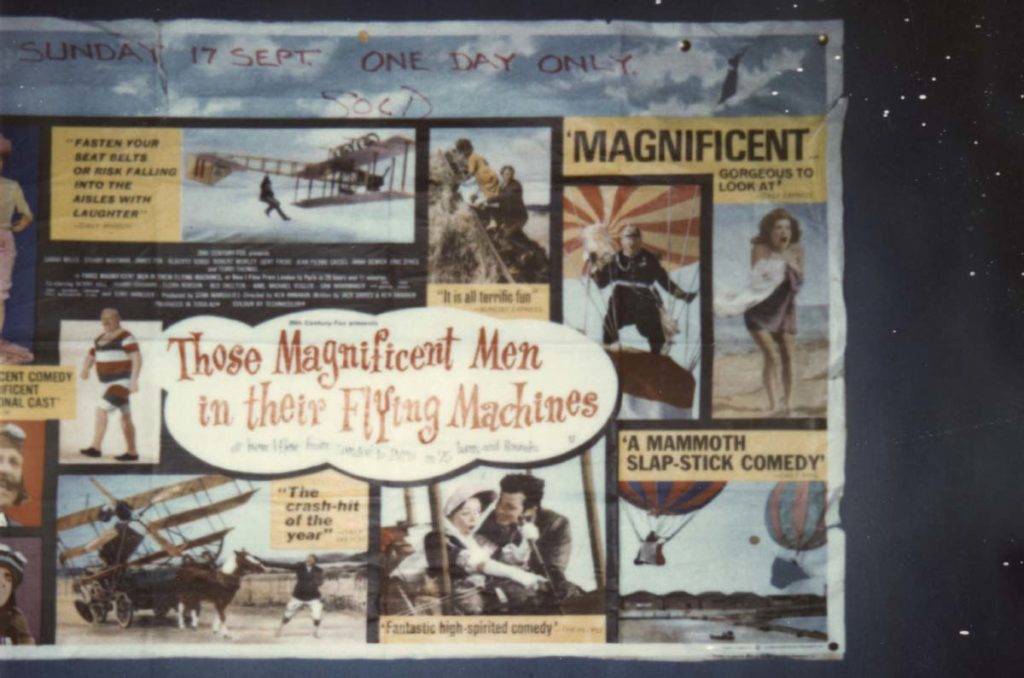 A snapshot of the poster of the final film at the Waverley before it closed in 1972: Those Magnificent Men in their Flying Machines. 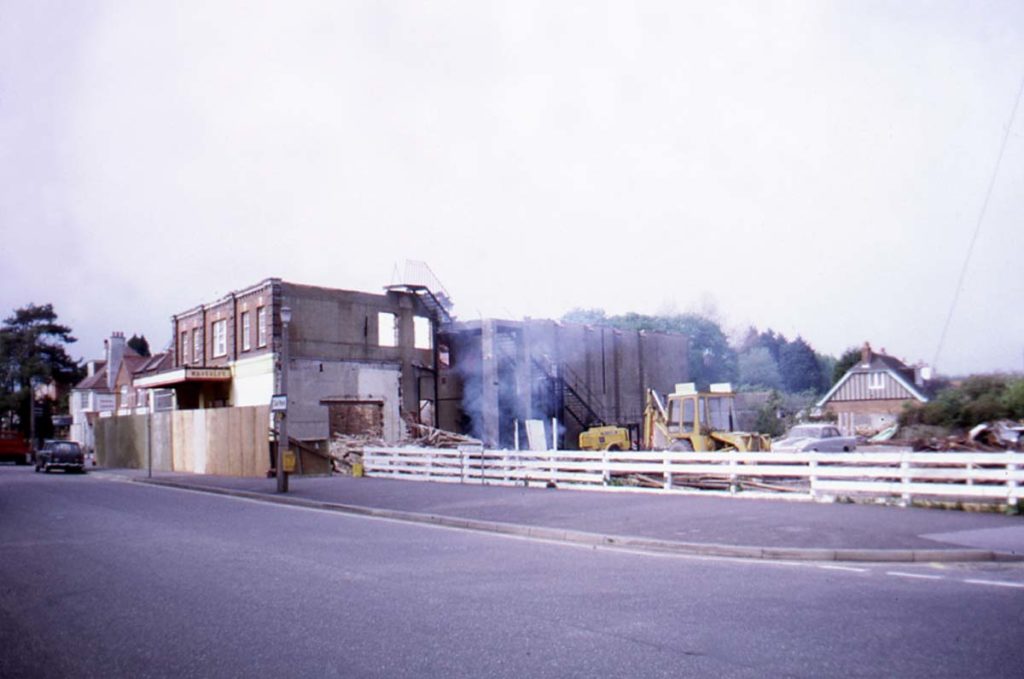 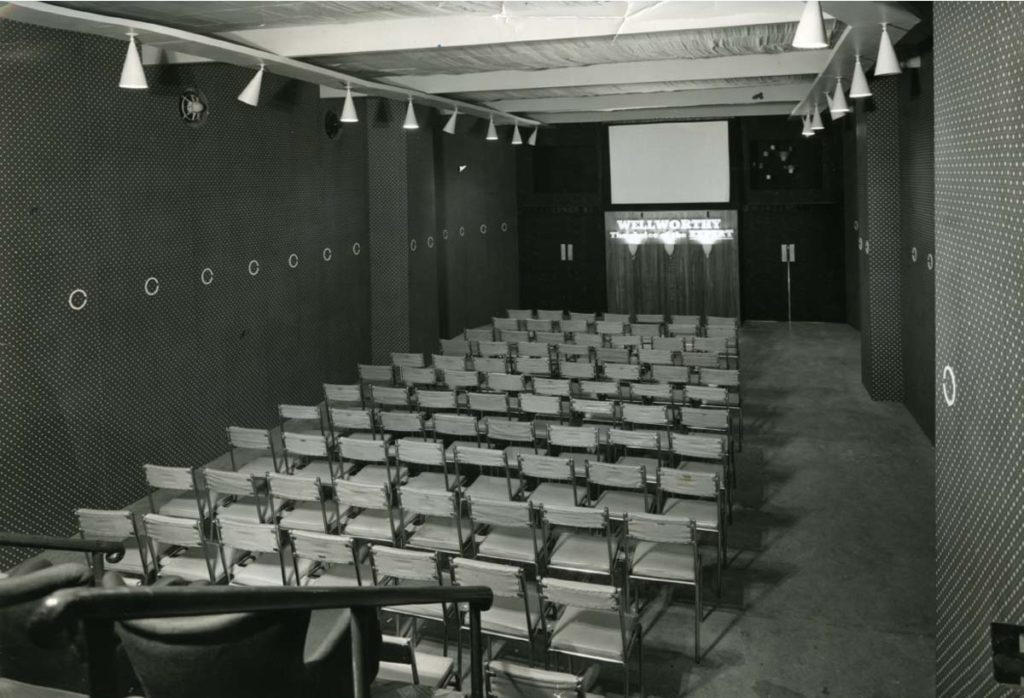 Inside of the Wellworthy Cinema which was attached to the block used as the Wellworthy Engineering Works Apprentice Training Centre at the top of Stanford Hill. Now demolished and part of the Waitrose supermarket car park.

“A very high proportion of the photographs in our collection come from our community,” adds Goulding whose team regularly invites locals into the museum to explore the collection.

“We are a very young museum, we didn’t start collecting until the late eighties so we depend completely on the people who live around here or still live around here to donate things to us, and they have been really good at it so we have some lovely collections – but we’re always on the look-out for more.

“These tea and memory sessions are an excellent way of getting more information because sometimes they can identify people in the images and sometimes they say they ‘I might have something you might be interested in’ and that is great way of curating and building the collection.”

Located at the heart of the beautiful, historic town of Lymington, St Barbe is a dynamic museum and highly regarded art gallery that appeals to both locals and New Forest visitors. The museum explores the history of Lymington and the New Forest Coast. Inspired by local pride, and supported by…