Cambridge University marked its 600 years in 2016 with an exhibition of treasures from 3,000 years of human thought and the written word – the exhibition can be explored online but here’s some of the spectacular highlights

The Origin of Species – scribbled on by Darwin’s kids 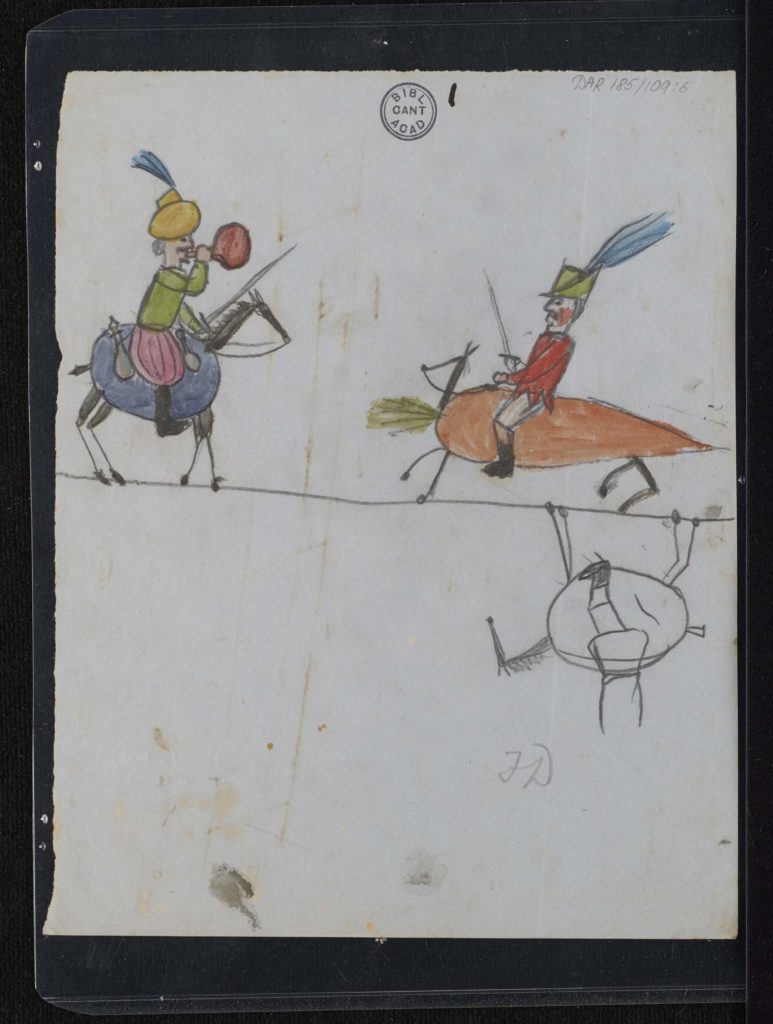 Charles Robert Darwin and Francis Darwin, Manuscript page of On the Origin of Species; The Battle of the Fruits and Vegetables © Cambridge University Library

Surrounded by his wife and ten children, Darwin worked at home drafting the original manuscript of On the Origin of Species – both loving father and keen scientific observer, closely watching the effects of inheritance in his own family.

Many of the rare surviving handwritten pages of his most famous tome were kept because they were given to his children as scrap paper to scribble and draw on. This one, with its battling fruit and vegetable armies, was probably by his son Francis, who was 11 when Origin was published. 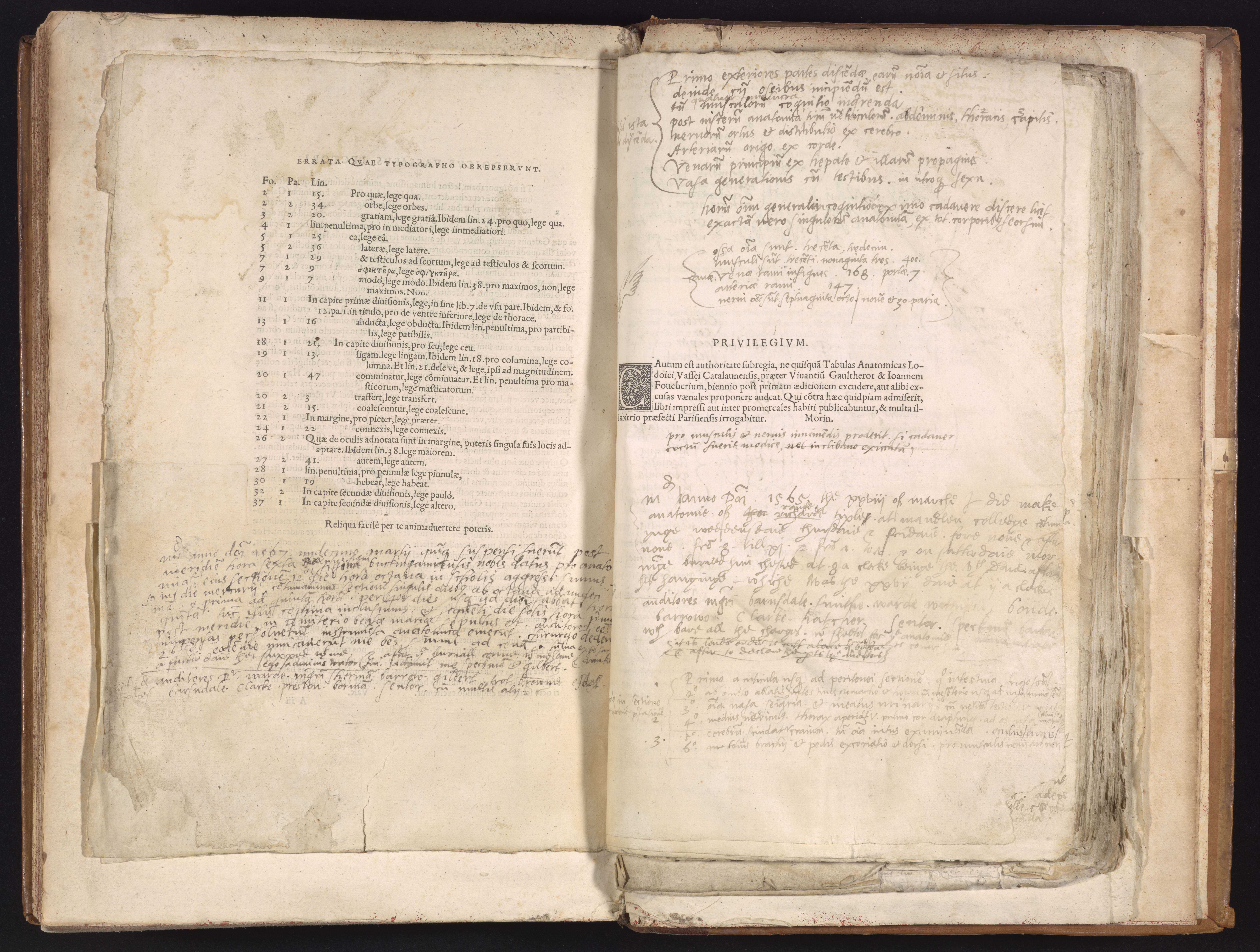 Candidates for the Batchelor and Doctor of Medicine at Cambridge were required to attend a minimum of two dissections – typically ceremonial occasions where students observed a surgeon at work on the corpse while the instructor read out from a learned treatise.

Vasses In Anatomen Corporis Humani records the names of those present at one such event at Magdalene College in 1564 or 1565, the first known record of a public dissection in England. Thomas Lorkyn, the Regius Professor of Physic at Cambridge, left it to the library. 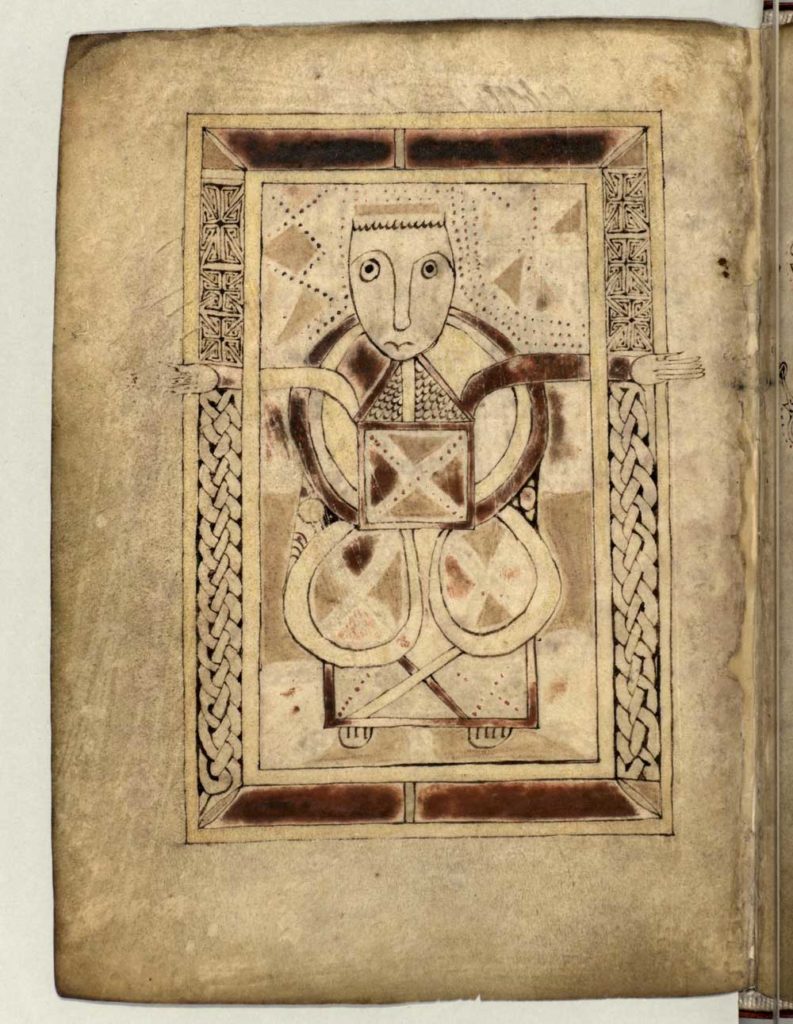 Given its name since its later notes refer to the monastery of Deer, in Aberdeenshire, this pocket gospel is the earliest surviving Scottish manuscript and the earliest example of Gaelic writing. It was written during the first half of the tenth century.

Its parchment is principally produced from the skin of sheep, goats and calves – a medium for writing from prehistoric times which remained dominant across the Christian, Jewish and Islamic worlds throughout the middle ages.

A seal from prehistoric Turkey 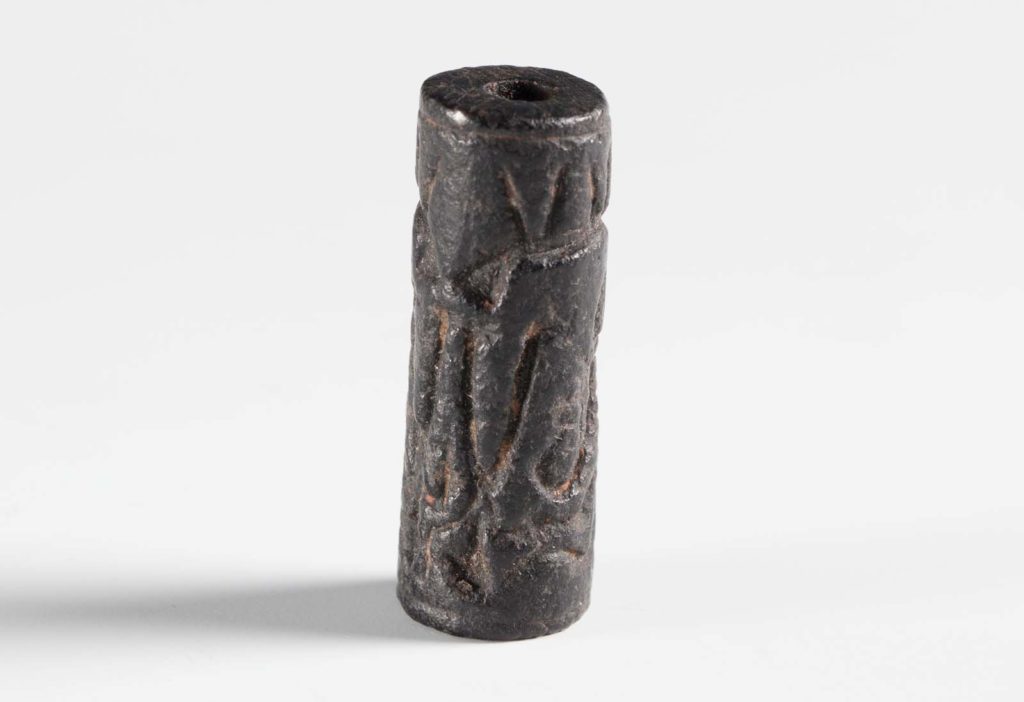 A hole drilled through this iron oxide seal, with an engraved design seen in relief when it was rolled in soft clay, would have allowed people to keep it accessible on cords around their necks.

The dried clay produced a distinctively-patterned seal, perhaps over a door, jar or box, or to sign a clay document – handy for admin purposes across the Near East between the fourth and first millennia BC. This one, from the Hittite Empire (modern Turkey), probably dates from the second millennium. 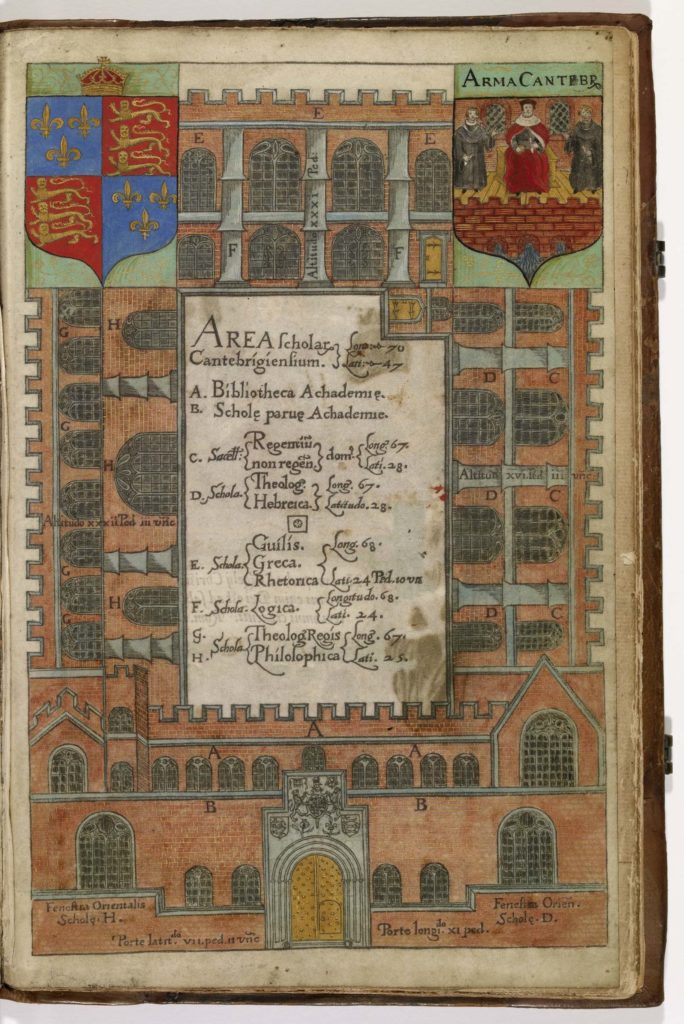 Matthew Parker, the Archbishop of Canterbury, wrote this brief account of the university, bound in beautiful 16th century English style with coloured illustrations and gifted as part of the Royal Library in 1715.

The woodcut shows the building which housed the Library. By the late 15th century, books occupied rooms on the first floor on three sides, marked A, G and E. 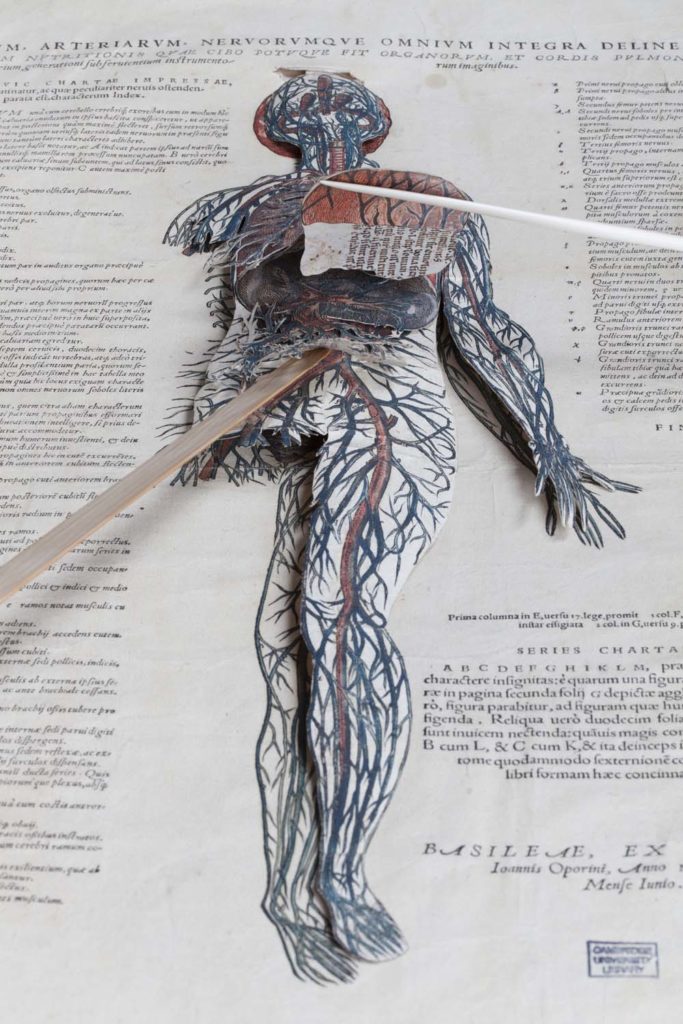 Vesalius’s hugely important seven books on the fabric of the human body and its companion, Epitome, represent a critical moment in the revival of anatomical study – he used the work to promote the value of dissection, a skill he learned as a student in Paris and practised as a demonstrator and lecturer in surgery at the University of Padua.

The care Vesalius invested in the production of these books was a key factor in establishing their authority, with images playing a critical role, vividly complementing the anatomical descriptions, accompanied by an innovative detachable cut-out manikin in this copy. It has been extraordinarily well preserved: each layer is mounted onto waste paper for reinforcement and the whole is meticulously hand-coloured to distinguish the body parts. 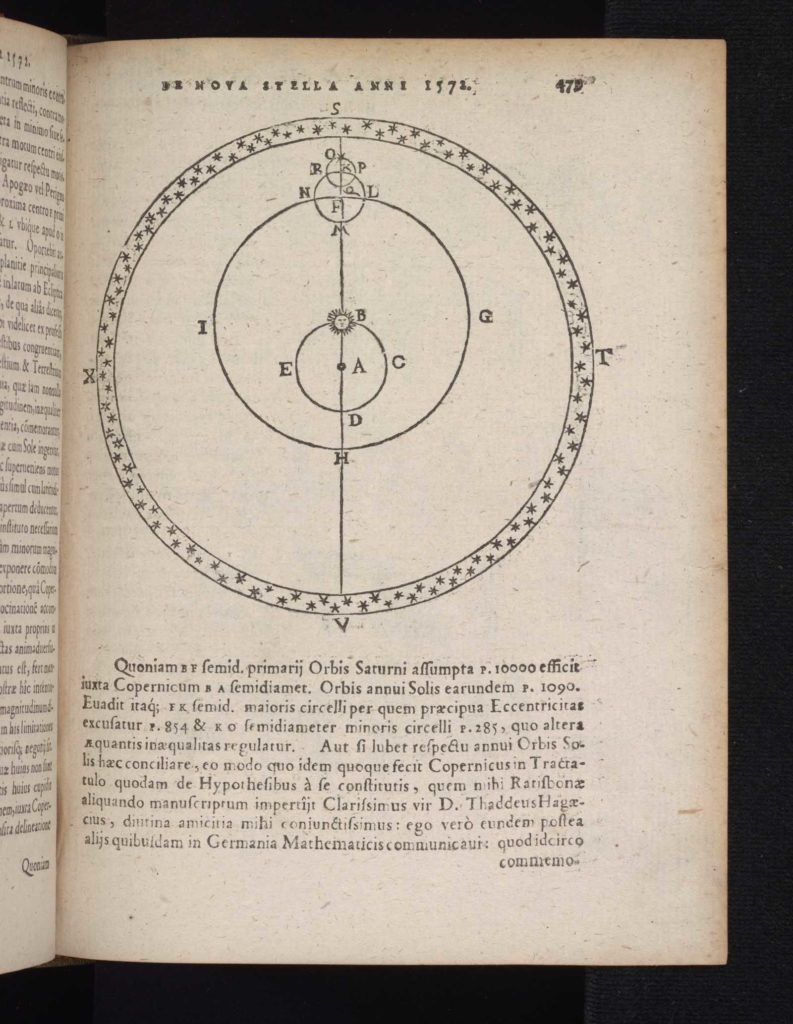 16th century Danish planetary master Brahe placed the earth at the centre of his system, around which the Sun orbited, but concluded that all the other bodies orbited the Sun.

Observation again upset this theory. The Great Comet of 1577 appeared in the earth’s atmosphere, observed and recorded by Brahe. How could a star suddenly burst forth in the unchanging Heavens? 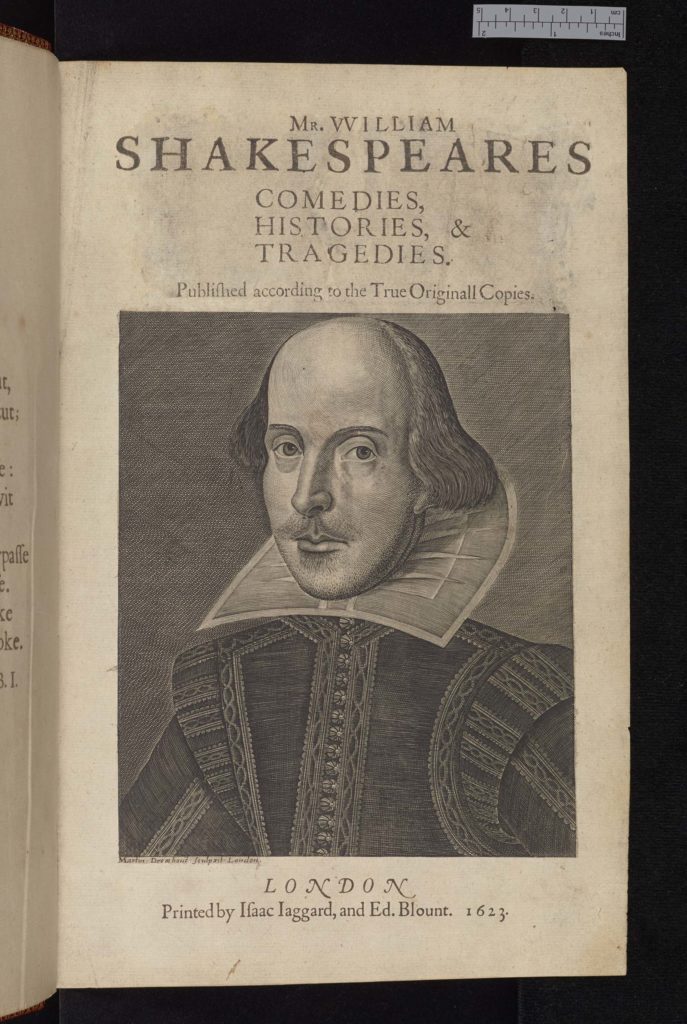 Shakespeare based many of his plots on the lives and deaths of historical rulers: titles of his plays name one Roman emperor, one queen of Egypt, one king in Britain, one king of Scots and seven kings of England.

These plays were drawn together under the heading Histories in this first collected edition of Shakespeares plays, a first folio gifted to the library by Samuel Sandars during the 19th century. The influence of the historical plays is unending: Richard III, to name one victim, is seen as an ugly, scheming tyrant thanks to Shakespeare’s depiction of him in Richard III. 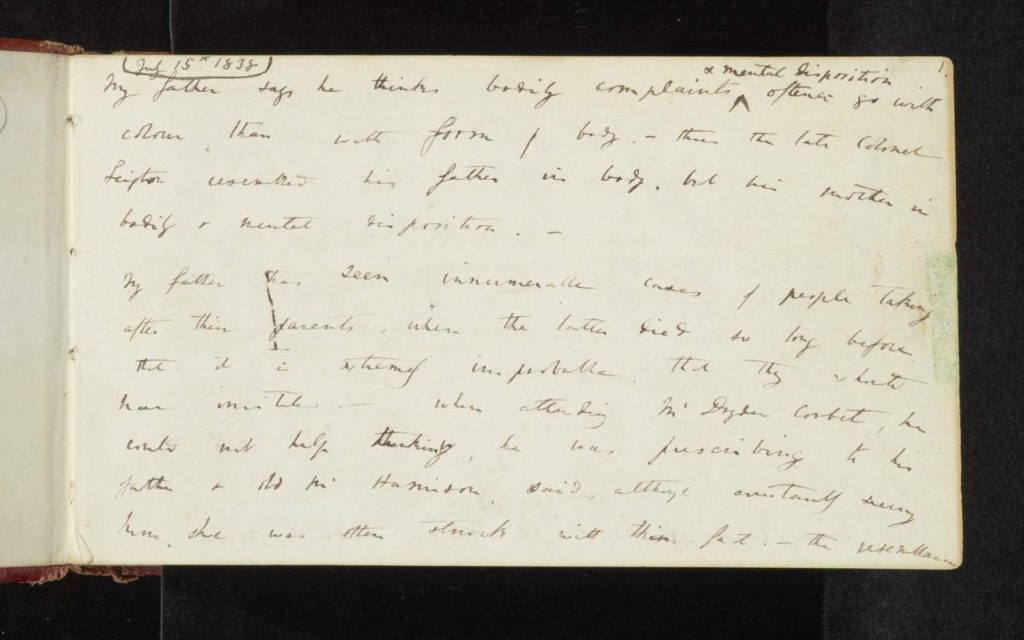 After returning from his world voyage on HMS Beagle in 1836, Darwin kept a series of small notebooks where he jotted down observations and speculations relevant to his already emerging theories.

This one, marked Private, starts with notes of a discussion on 15 July 1838 with his father, a medical doctor, on inherited habits: “My father has seen innumerable cases of people taking after their parents, when the latter died so long before, that it is extremely improbable that they should have imitated.” 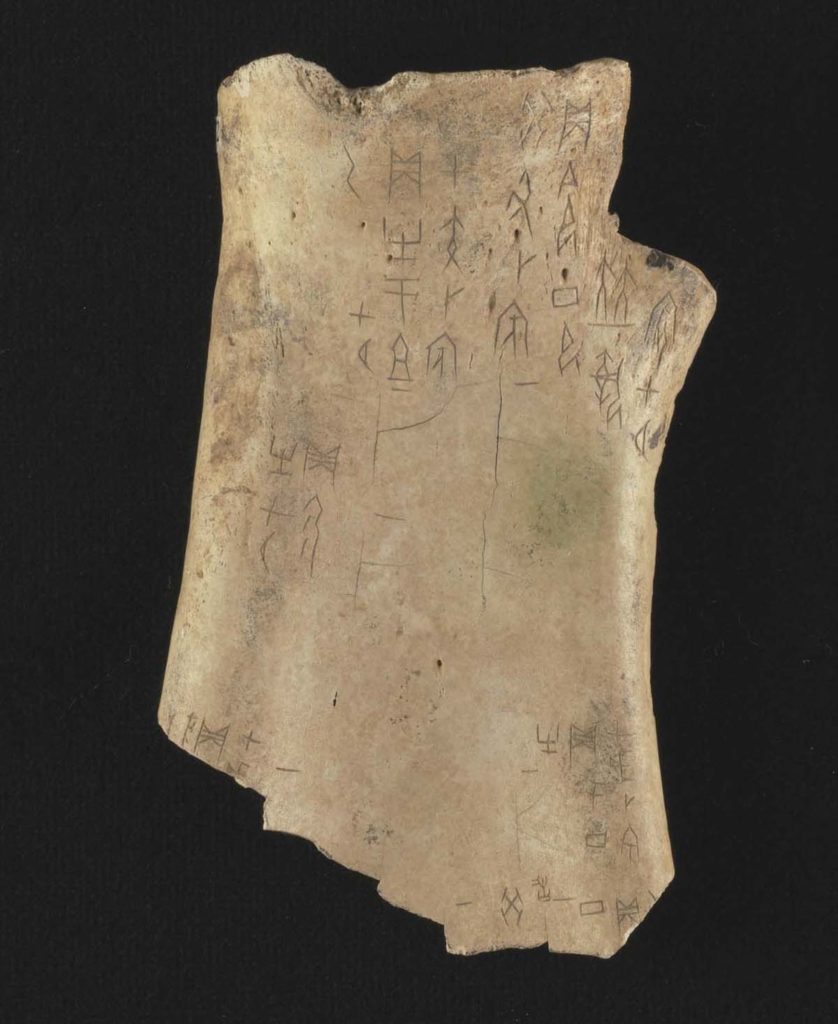 Ox shoulder blades and pieces of turtle shell were used to divine the future, with their readers inscribing questions onto them before pressing them with a heated metal rod and interpreting the resulting cracks.

They date from the ruling Shang dynasty in 16th-11th century BC China, and are the library’s oldest written materials.

This article was first published in 2016.