Jenny van Enckevort, Senior Conservator at the People’s History Museum spends three months a year preparing banners for their yearly changing banner display. Here she chooses ten banners from this year’s selection, which coincides with the 100th anniversary of the Representation of the People Act 1918, which enabled all men and some women over the age of 30 to vote for the first time 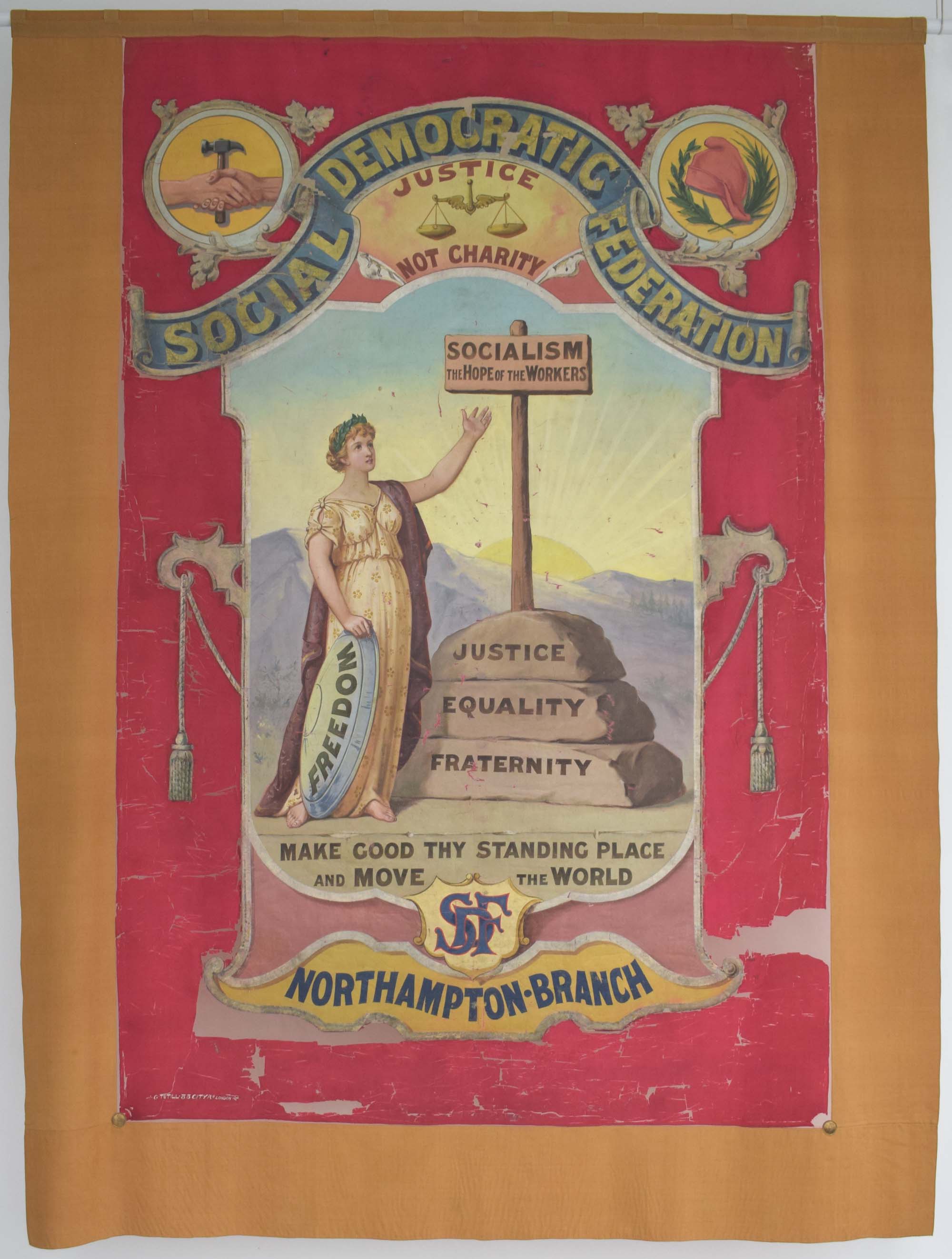 The Social Democratic Federation was established in 1884 and lasted until 1939, although this banner is thought to date from around 1900.

It was made by the prolific banner maker George Tutill, and it’s quite unusual for his style because it’s a got a very large painted central panel and is portrait rather than square in format.

The weight of the paint in that central section means it’s extremely heavy and the silk is bearing this weight. You can actually see right through the banner in places, which is interesting for visitors because it gives an impression of how fragile it is, despite the fact is has been fully conserved.

It’s all hand-painted and the imagery of the different tools and the clasped hands is quite common of banners of this period. There were still a large proportion of people who were illiterate so imagery and symbolism was a really important way for unions to talk about what they do and to inspire people.

At about three metres high you would need at least four men to carry and control it. If it caught the wind it could be blown away – and marches would take place regardless of whether it was raining or not. But Union banners were highly prized objects and relatively expensive to buy so they would have been carefully put away, although probably not dried off as well as you might like. 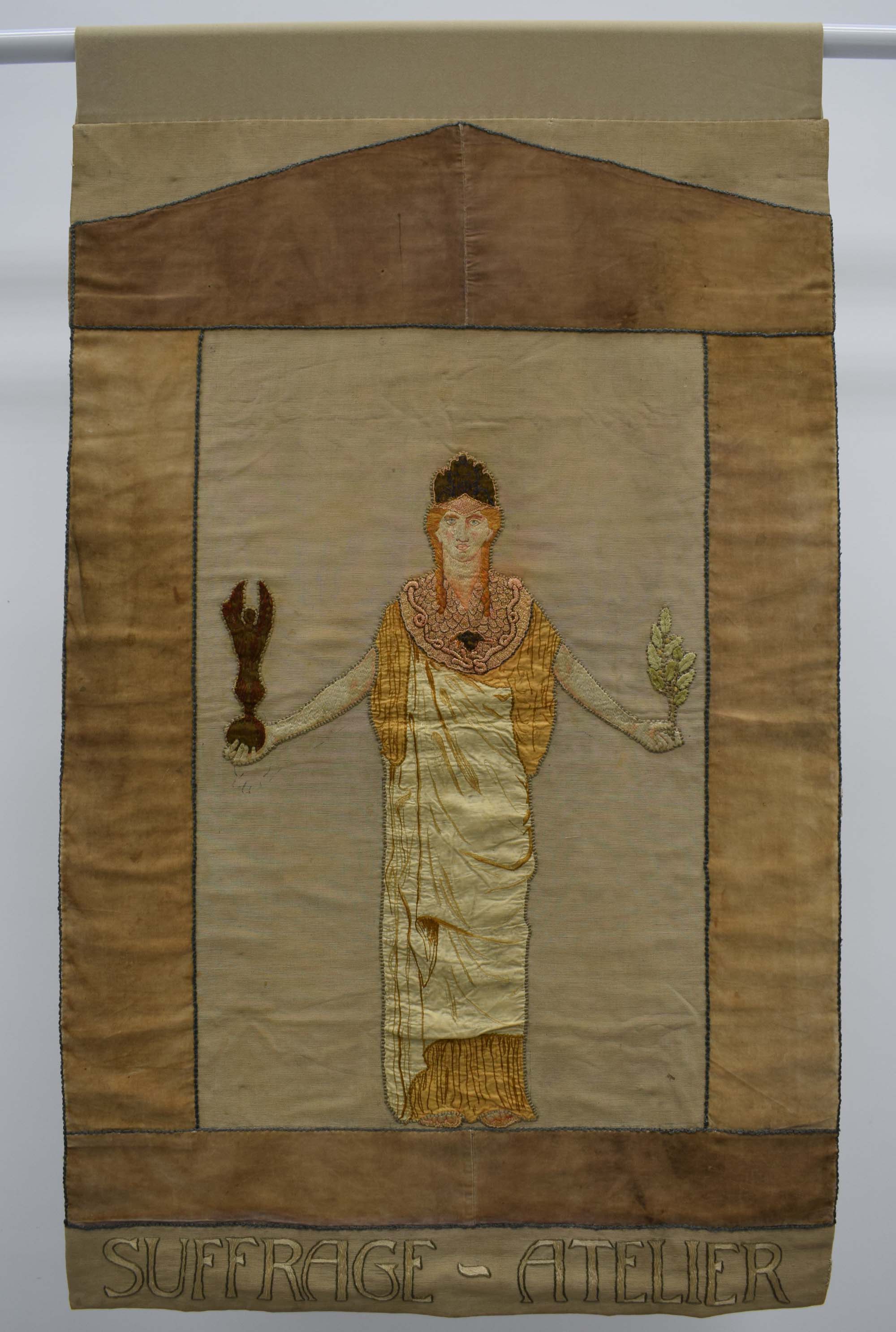 The necklace the central Grecian-style figure in this banner wears is gilded thread, made of paper around a silk core, which is something you see in Asian costume and Chinese imports at this time – so it fits with the period. It’s really shimmery and copper-coloured, which may not come across in the photograph but is enhanced under magnification.

The Suffrage Atelier started off as an Arts and Crafts Society working for the enfranchisement of women in 1909. They were non-professional artists working for the cause – giving a percentage of the profits they made to the Women’s Suffrage Movement.

They were artists but they were often working out of their homes around London and they would exhibit and organise classes.

The banner has faded quite a bit, the background would have been a more purple colour – and closer to the purple green and white colours, which were adopted by the Suffragette movement in 1908. At 162 cm high it may have been carried as a T-bar style banner, like the kind you might get in a church parade, it was probably carried by one person.

This banner comes from the more militant branch of the Suffrage movement, the Women’s Social and Political Union (WSPU) led by Emmeline Pankhurst and her daughters Christabel and Sylvia. The Brighton branch of the WSPU are interesting because there is a record of two members, Eva Bourne and Mary Leigh, hiding in the Brighton Dome in 1910 inside the organ so they could leap out during a speech by the Prime Minister Herbert Asquith. But they were caught because one of them sneezed.

It’s a little bit faded and there are quite a few old repairs but these are part of the working life of the banner.

There are quite a few Suffragette banners around, the Museum of London has some but if they come up for auction today, they are highly collectible and they often go to the American market. We also have an Ilford WSPU banner and we’ll be putting our recently acquired Manchester Suffragette banner on display in June for the Vote 100 centenary. 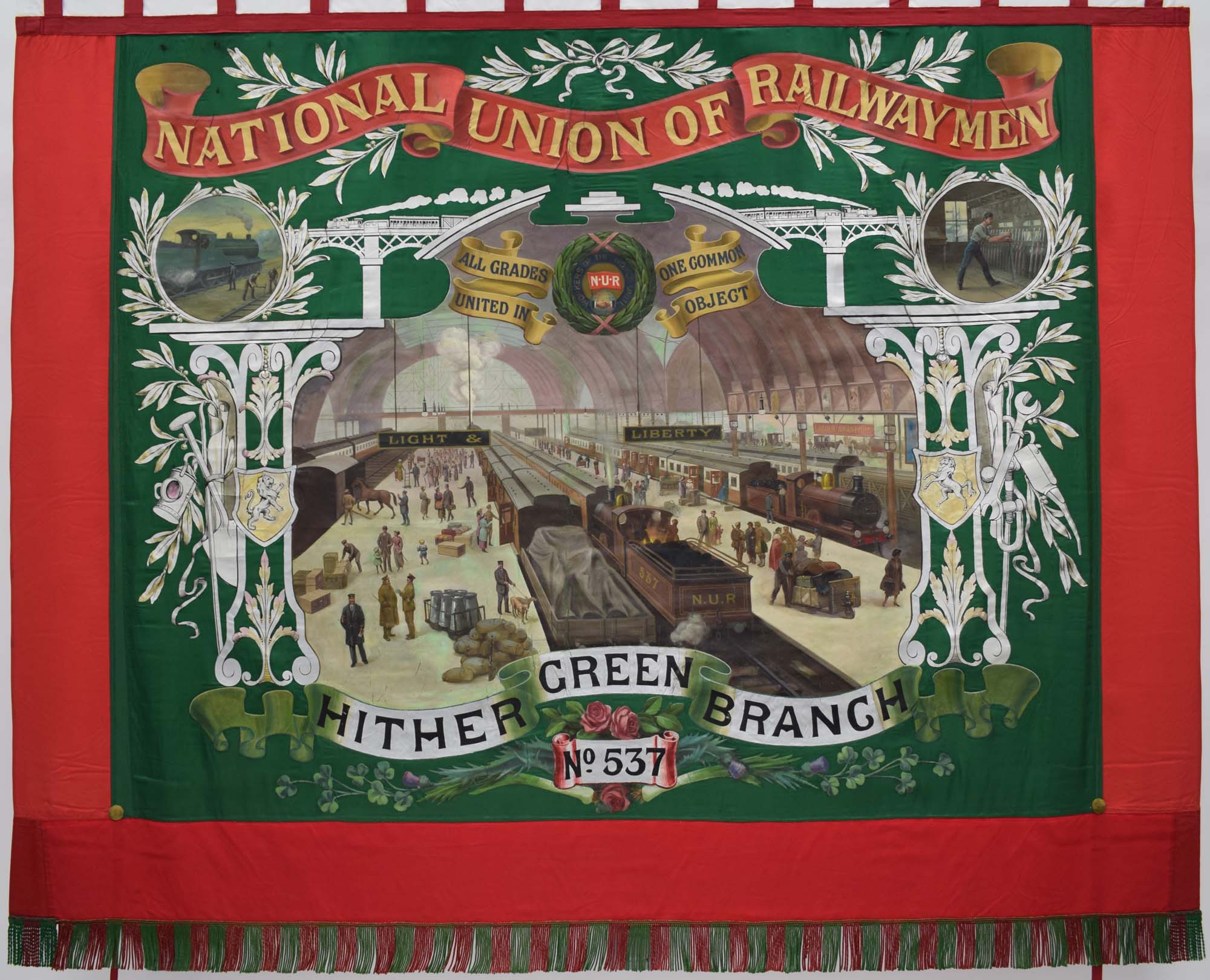 This is in many ways the classic Trade Union banner. Over three-metres wide, it was made by George Kenning and Son. during the First World War. The company is still in existence as the jewellery, clothing and ribbon maker Toye, Kenning & Spencer.

Their banners tended to have a painted central panel with decorative scrolling around the edges. This one has got the tools of the trade down the sides in a beautiful silver that has stayed really strong and bright. The central image features Paddington Train Station and shows soldiers returning and leaving for the front. You can stand in front of it for quite some time looking at all the detail in it.

The different regiments depicted represent the number of railwaymen who had signed up, 45,000 by December 1914. The banner also reflects the importance of the railways in organising the war effort.

In 1915 women were permitted to join the union as they were being recruited into jobs to replace men going off to war, which was quite unusual for unions of that period.

Workers United Will Never Be Defeated 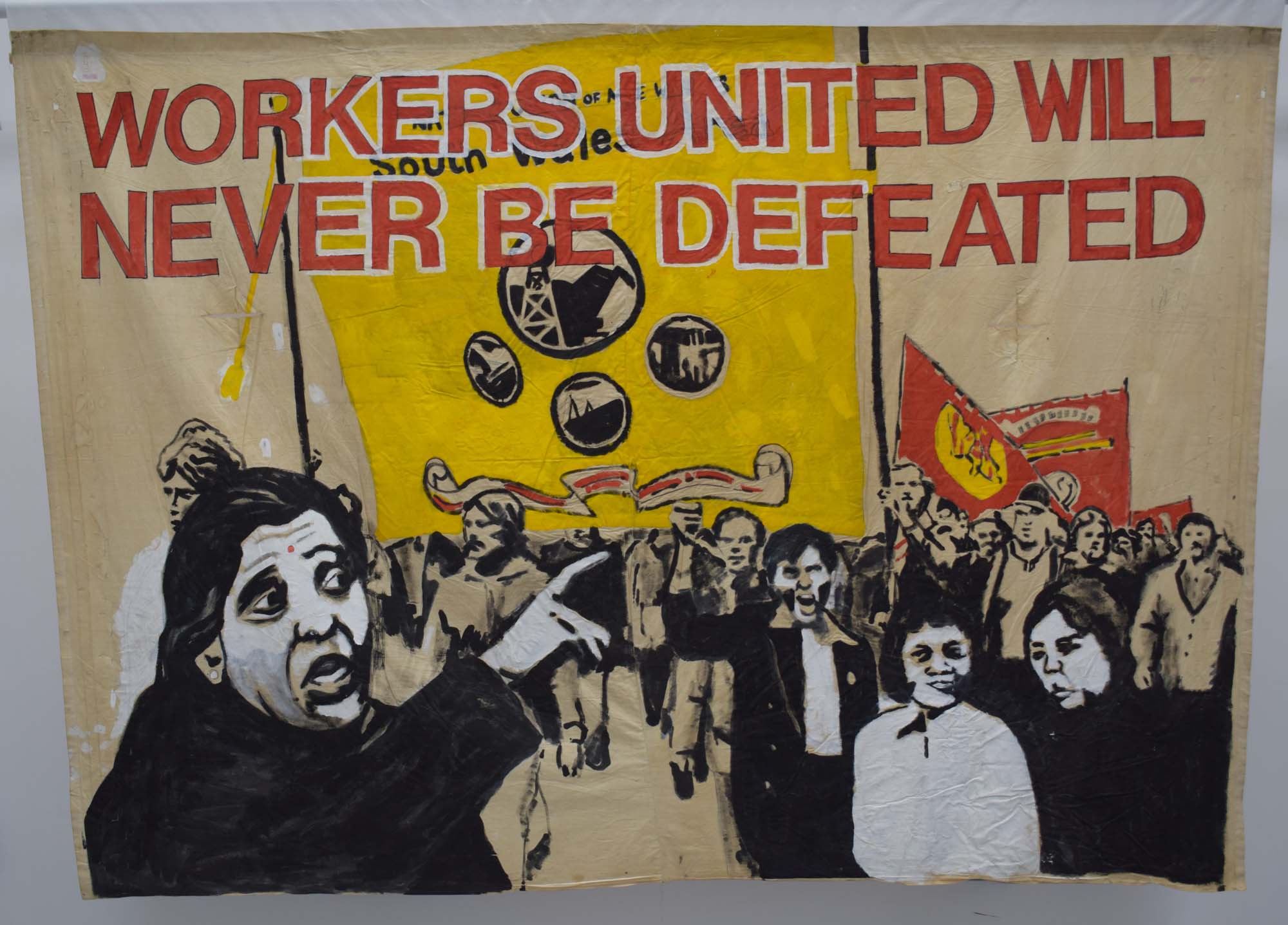 This banner represents the Grunwick Strike of 1976, which saw a group of women workers protest about the working conditions in the Grunwick Film Processing Laboratories in Willesden.

The laboratory predominantly employed South Asian women who worked long hours for low pay in bullying conditions. Eventually the women decided they were not going to stand for it anymore and they walked out. They joined a union called APEX, the Association of Professional, Executive, Clerical and Computer Staff and the strike was eventually supported by over 20,000 fellow workers across the UK. After two years of picketing and protest, a government report, the Scarman Report, recommended the women be given their jobs back and the working conditions improved.

Sadly the company rejected the report, the strikers were not reinstated and their union membership was not recognised, but it was seen as a turning point. It was quite unusual for a Union at the time to be representing woman – especially south Asian women, which was virtually unheard of.

It’s also really interesting to have a banner depicted within a banner – and then there is the woman in the foreground, Jayaben Desai, who is sadly no longer with us but was at the forefront of the whole campaign. The style of the painting is also very striking; I think it really speaks of its era. 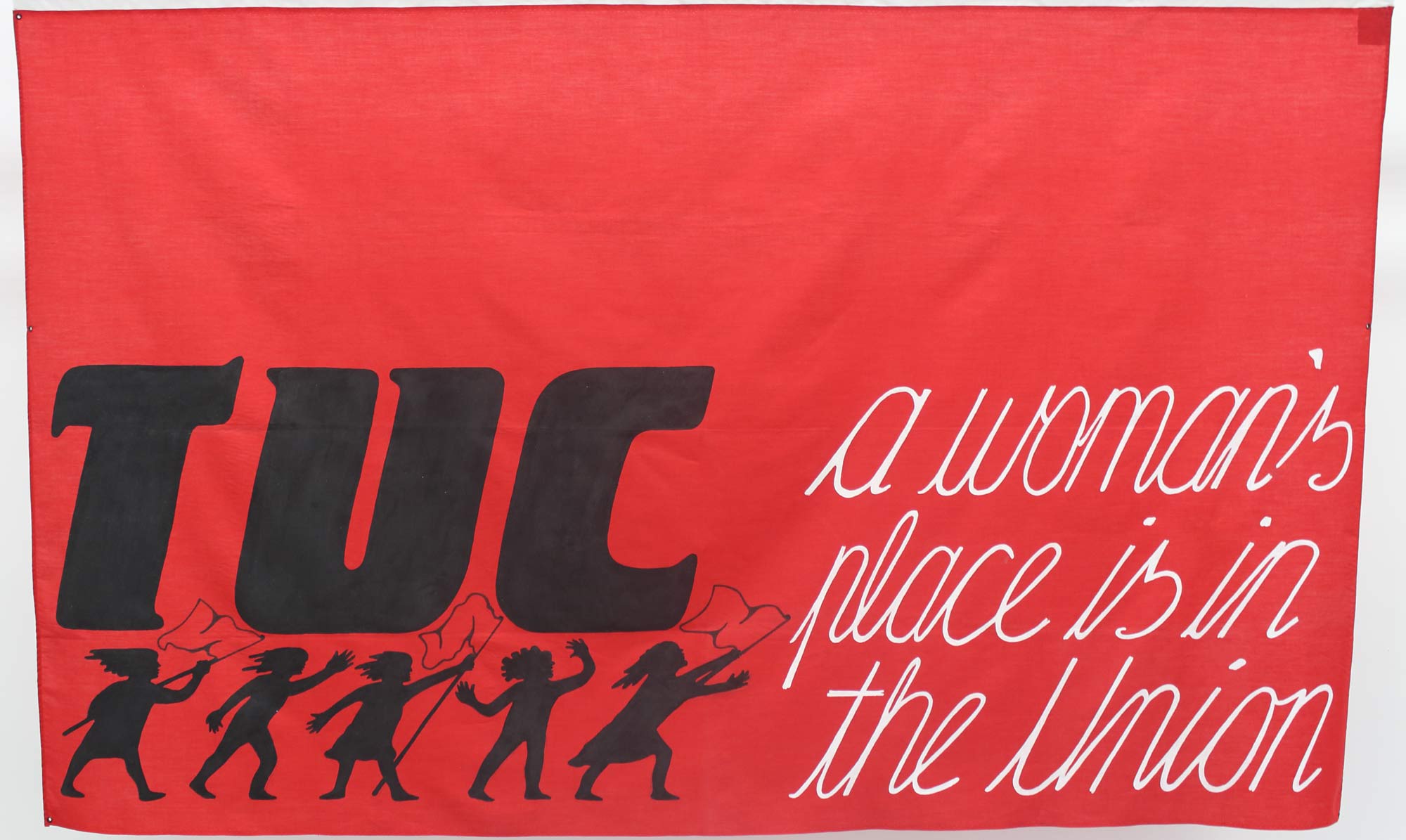 We do have quite a few TUC banners from the 1970s and 1980s in the collection and this banner was made for the East Anglia region of the Trades Union Congress in approximately 1980 as part of a campaign to recruit more women members. It plays on the age old phrase that ‘a woman’s place is in the home’. However by the mid-20th century this view was being challenged by many, including the Trades Union Congress (TUC).

In the mid-twentieth century women were actively campaigning for equal rights in the workplace, the Equal Pay Act was passed in 1970 and even though things aren’t as equal as they should be even today – it highlights how long women have been fighting for this so it really fits in to the theme of the centenary year. 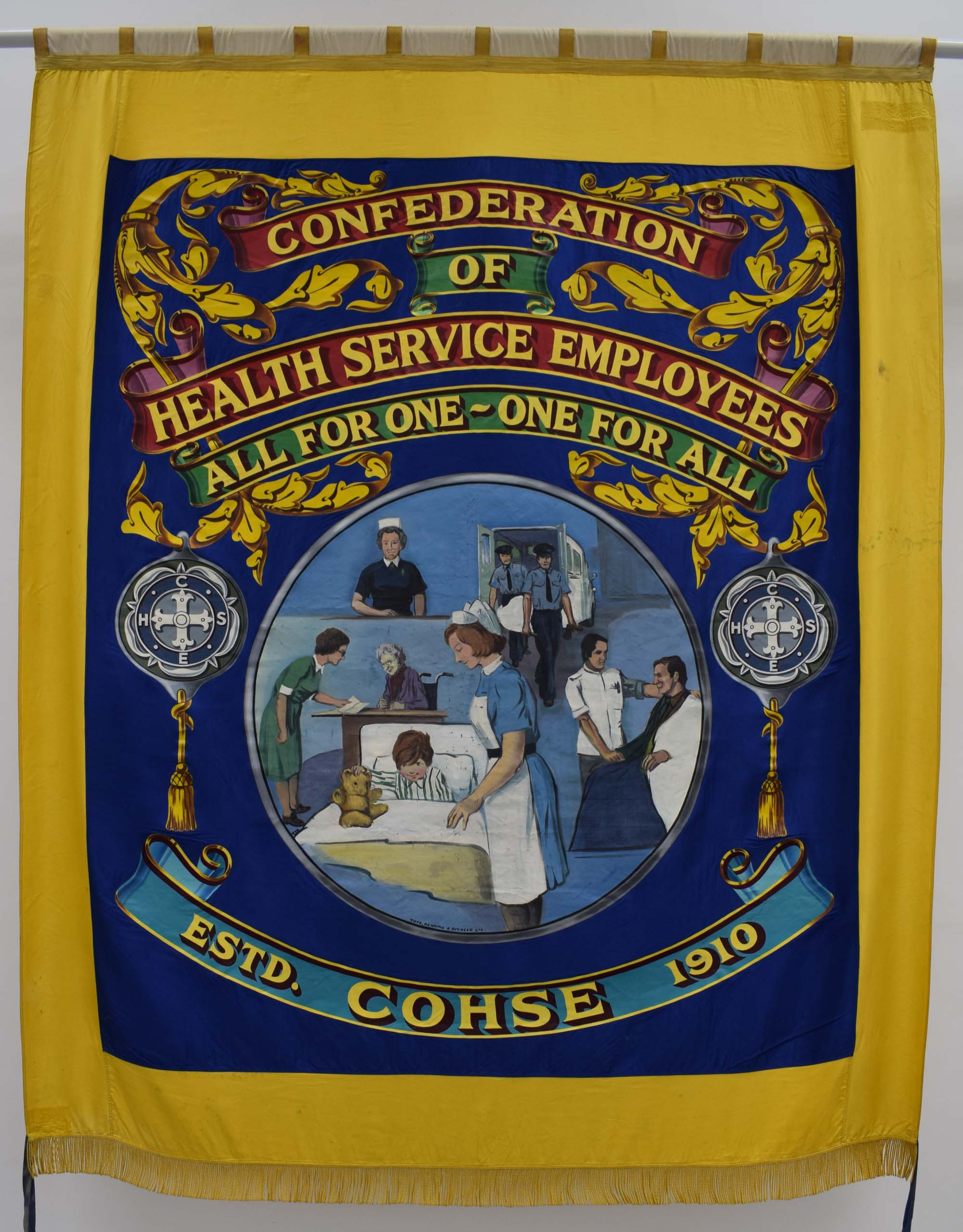 This striking banner, which is typical of Trade Union banners, dates to around 1978 and was made for a total cost of £1,348 (around £4,000 today). With its central image and curved lettering across the top, it features nurses and ambulance men – all of them members of COHSE, which started in 1910 as the Hospital and Welfare Services Union, then COHSE in 1946 before it was dissolved and became UNISON in 1993. The diversity and unity of the image is complemented by the slogan “all for one – one for all” above it.

It’s a two person banner made from a synthetic fabric painted in acrylics. It’s also interesting to note that it was made by Toye Kenning who made the Railway Union banner, although the quality of the painting isn’t as good. 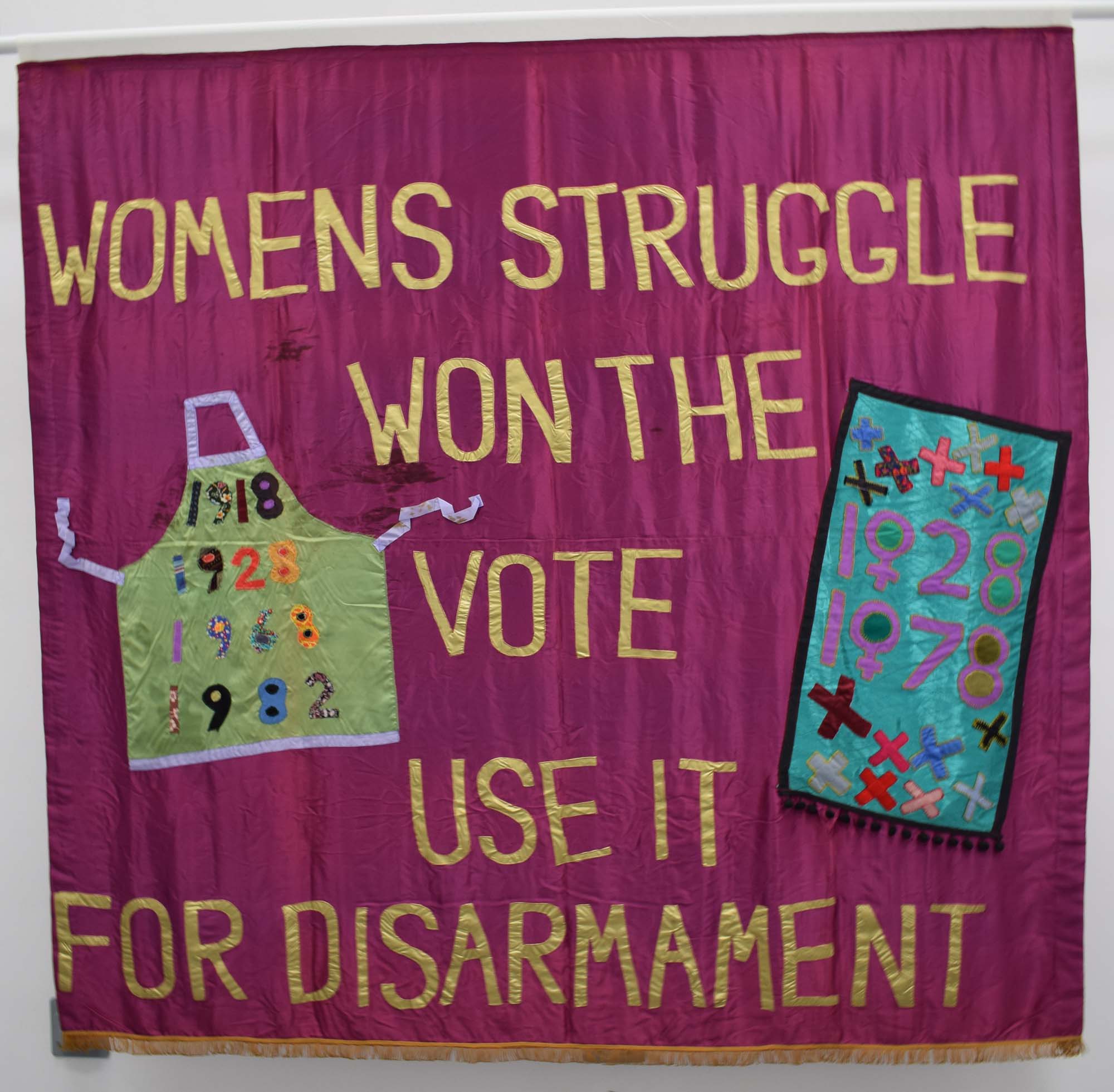 This banner was made by Welsh banner maker Thalia Campbell who made quite a few banners for the Greenham Common Women’s Peace camp protesting the presence of US nuclear weapons at the US military base in Berkshire. Although this doesn’t mention Greenham Common, we think it is connected with that.

It’s nice because it features the dates that are significant in women’s rights including 1918 when women first got the vote and 1928 when the franchise was widened, then there’s 1968 and 1982 which saw the pivotal campaigns at Dagenham and Greenham common.

Thalia Campbell’s banners are of a similar type and they often have the sense of having being done quite quickly for a campaign – it has that spontaneous spirit to it. It’s not painted – the letters are applique, stitched fabric, so it’s certainly a departure from the expensive banners that unions may have commissioned in the past.

Hands off our midwives

This was designed to be carried by women on the Reclaiming Birth Rally of March 2010, which was protesting against the closure of Albany Midwife Practice, which offered midwife services to disadvantaged parts of Peckham. The practice was seen as an exemplar in midwifery care and when in 2009, Kings Health Care Trust ended its contract with them; it prompted a rally in central London.

The banner is made out of a bedsheet with African wax resistant painted fabrics applied onto it and I think these are very evocative of the women who were taking part in the protest. The letters have however been stuck down with glue, others have been stitched – so even though it’s modern it’s problematic in terms of its future care. 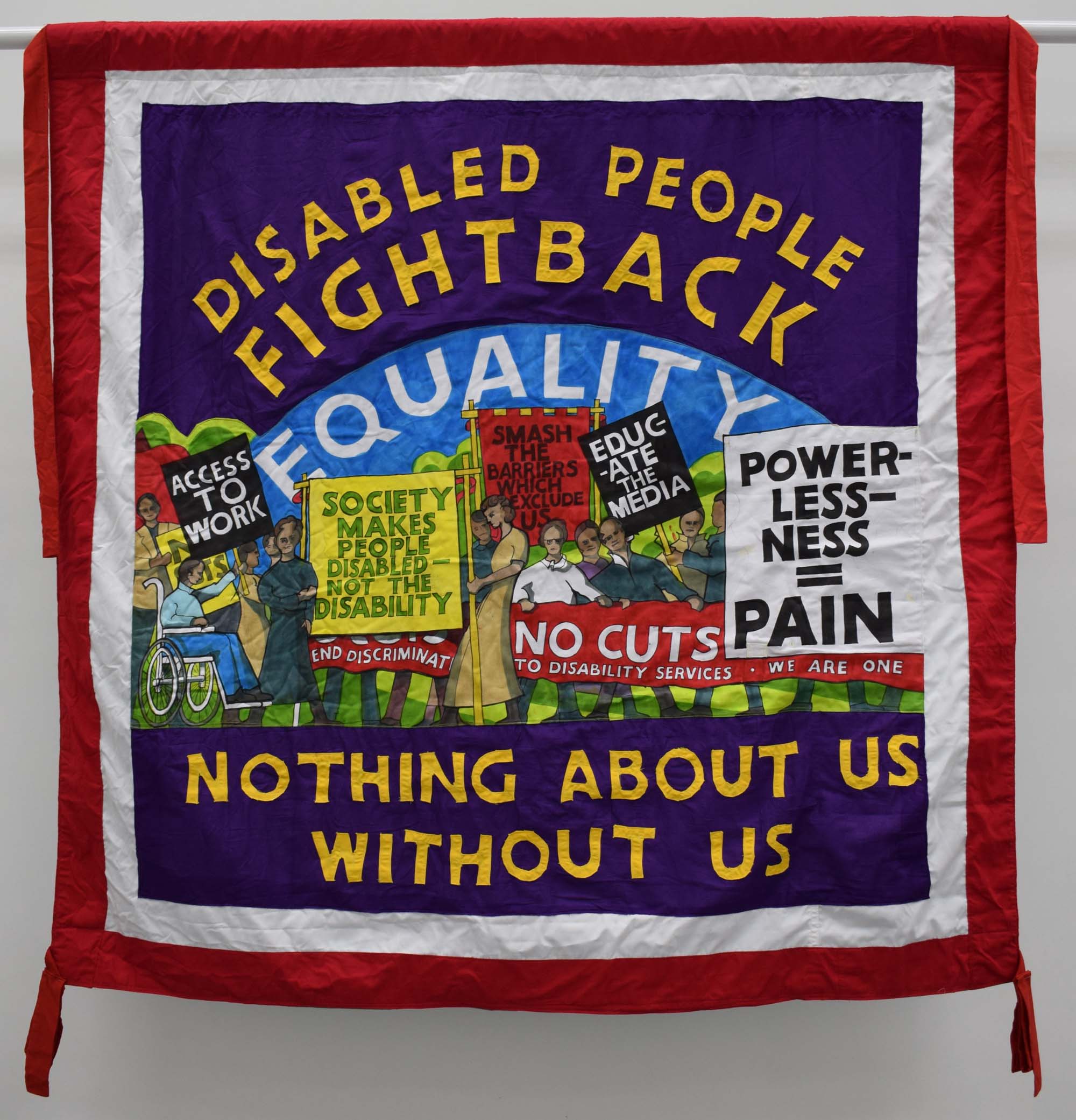 This banner is by the prolific banner maker Ed Hall, http://www.edhallbanners.co.uk/ who’s very passionate about what he does and has even been known to make banners for campaigns he believes in without payment.

A mixture of paint and applique, it has a painted central section with lettering above and below that is stitched on.

It was made in 2014/15 for a campaign called ‘disbanner’, a project working with people across the North West to address issues around disability and austerity. With its central section and curved lettering it really harks back to the traditional Trades Union banners. Ed’s ’s definitely a person who knows the tradition of banner making.

The museum holds one of the largest collections of historic trade union and political banners in the world and is the UK’s leading authority on the conservation and study of banners. Find out more at www.phm.org.uk/our-collection/banners/

There are 25 banners in the yearly banner changeover, see them at the People’s History Museum now. Entry is free.