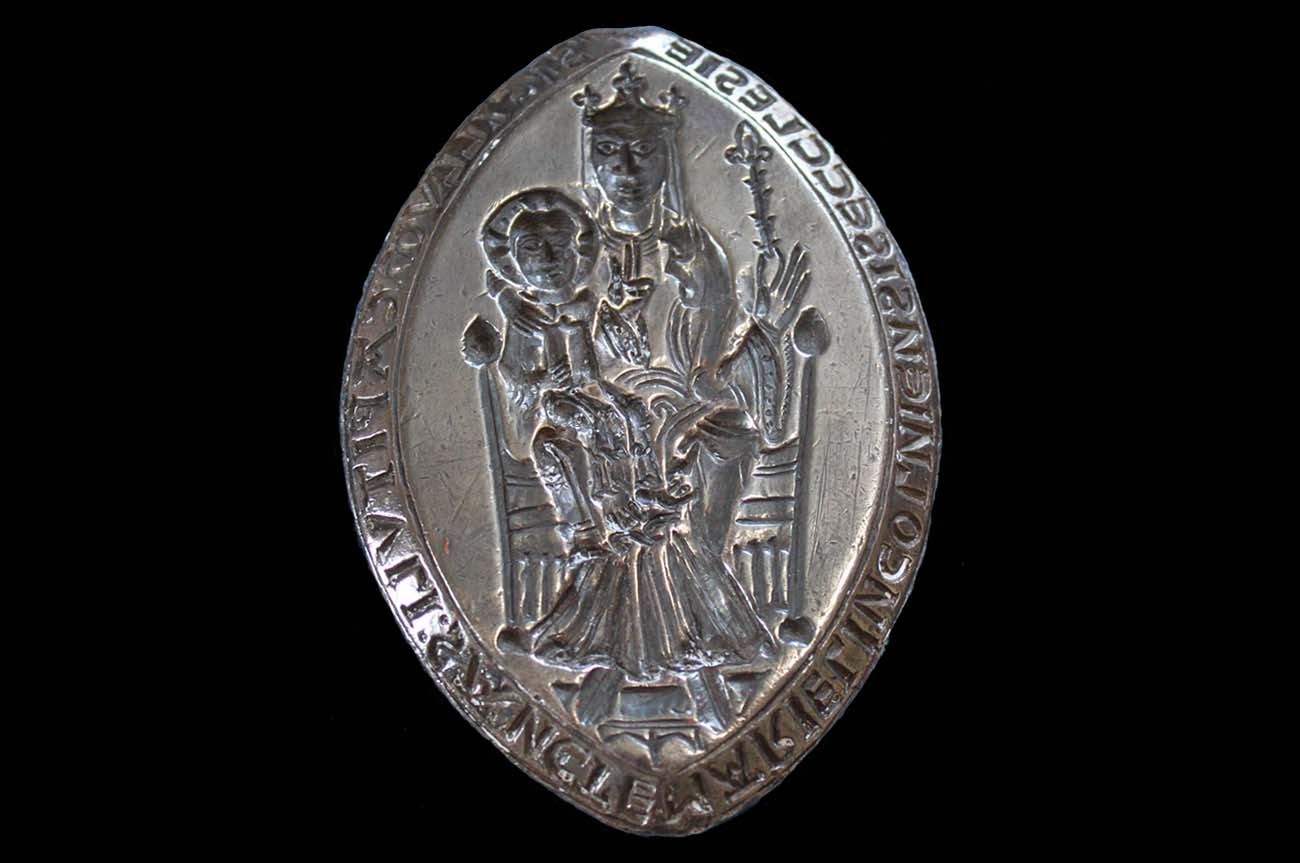 A rare 12th century relic has been found in Lincoln Cathedral

They keep finding things at Lincoln Cathedral. Only last month they discovered an old medieval knight – of the wooden variety that used to adorn a clock – gathering dust in a forgotten room in a tower.

Now an overlooked box in a cathedral storeroom has yielded an even greater find: a rare 12th century seal matrix used by the medieval Dean and Chapter to officially give documents a seal of approval.

Dating from the time when the cathedral was under construction – work began in 1092 and continued in several phases throughout the medieval period – the silver seal with a classic pointed oval ecclesiastical design, is one of only a handful of comparable silver institutional matrices to have survived. Another like it, but from the 13th century is the Chichester matrix at the British Museum.

The engraved metal die or ‘matrix’ would have been pressed into a material such as wax, clay or even paper to authenticate a document in much the same way that we use signatures today. It would also have been used to literally seal documents and transactions officially drawn up by the cathedral throughout the Norman period and beyond. 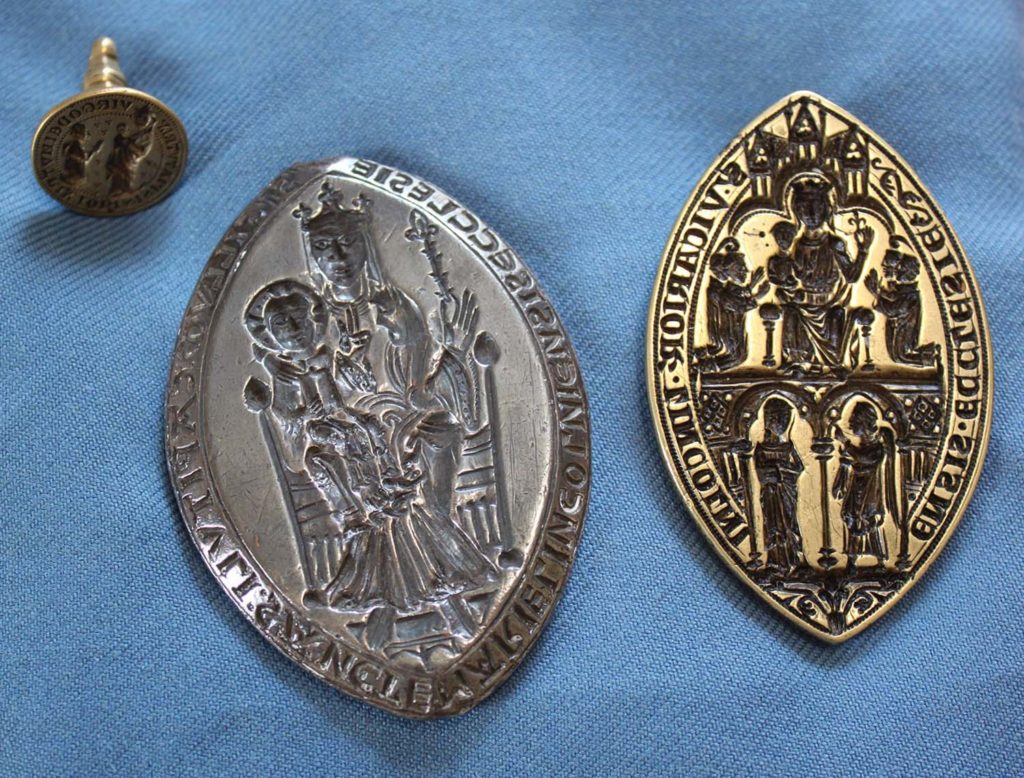 The Chapter Seal alongside a 13th century seal matrix of the Vicars Choral and a 14th century ‘Sacrist’s Seal’ belonging to a cleric named John. Courtesy Lincoln Cathedral

The discovery was made during an audit of the Cathedral’s extensive collections as part of an ongoing National Lottery funded project to improve the visitor experience, and was found in a box of previously uncatalogued replicas. It was believed to be Victorian in date until a closer look revealed the truth.

Experts, including academics from the University of East Anglia and the British Museum, agree that the matrix dates from the early medieval period.

Lloyd de Beer, Ferguson Curator of Medieval Europe at the British Museum, said: “Institutional seal matrices like this are extremely rare, especially in silver and from such an early date. The Lincoln seal is a joy to behold. It is a masterpiece of micro sculpture made by a truly skilled goldsmith. What’s more, the reverse contains beautiful swirls of niello surrounding an enthroned Christ.”

Its prior existence was known of, and “the Great Seal of the Chapter of Lincoln Cathedral” had a world-wide reputation as a rare piece of 12th century craftsmanship, but until recently no one in living memory had seen or handled the real object.

“Since 1893, important Cathedral documents have been sealed using an electrotyped copy while the true matrix has lain hidden and unrecognised within the Cathedral store,” explained expert in medieval ecclesiastical treasures, Dr Lesley Milner FSA.

“It was a hugely exciting moment for us all when this forgotten art work was rediscovered and put into the hands of Professor Sandy Heslop, an authority on 12th century metalwork. For a moment there was silence and then he said ‘Wow!’, realising that Lincoln had re-acquired a supreme piece of Norman art.” 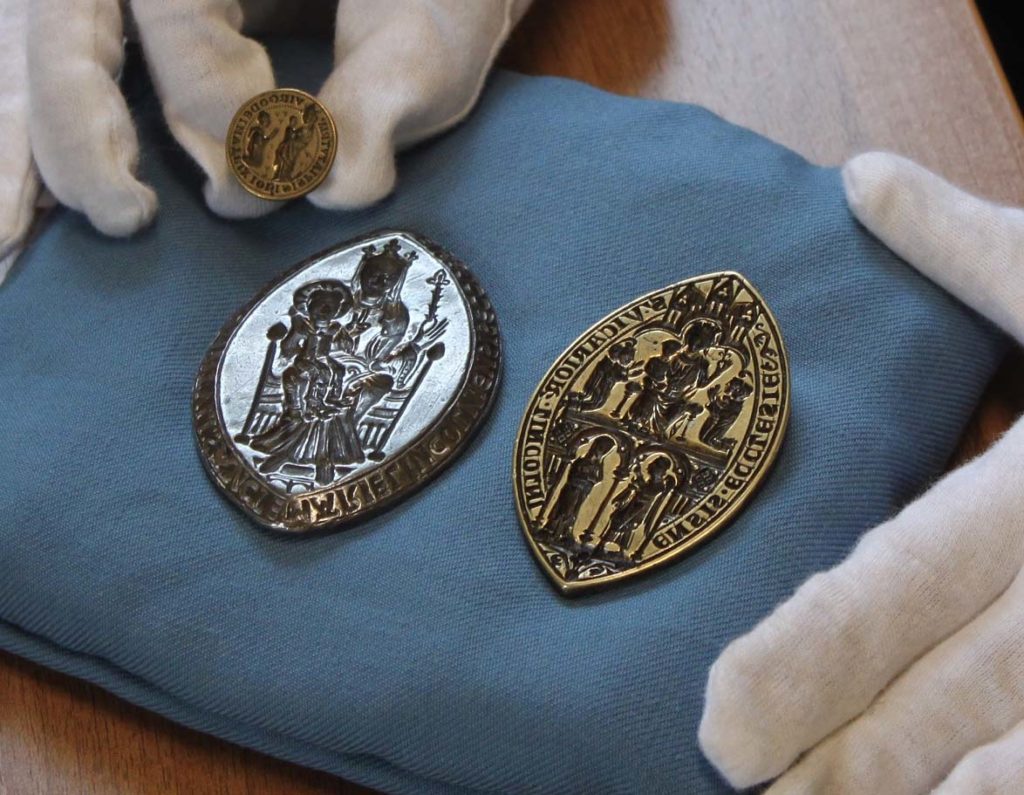 The seal depicts the patron saint of Lincoln Cathedral, the Virgin Mary, who is shown crowned and seated on a throne, holding the infant Christ in her lap. In her left hand she holds a flowering rod topped by a fleur-de-lis.

Alongside the Chapter Seal, two further rare matrices were also discovered in the same box, including a 13th century seal matrix of the Vicars Choral and a 14th century ‘Sacrist’s Seal’, a small, personal seal matrix belonging to a cleric named John.

Fern Dawson, the collections and engagement officer who found the artefact said, “discoveries really don’t get much better than this. From finding the seal in the store, to having its identity revealed, this has been an amazing journey of discovery.

“For years the Cathedral had confused the true seal with a much later 19th century copy, which had in recent years been exhibited in London and Germany. The discovery of the real 12th century seal is an amazing surprise.”