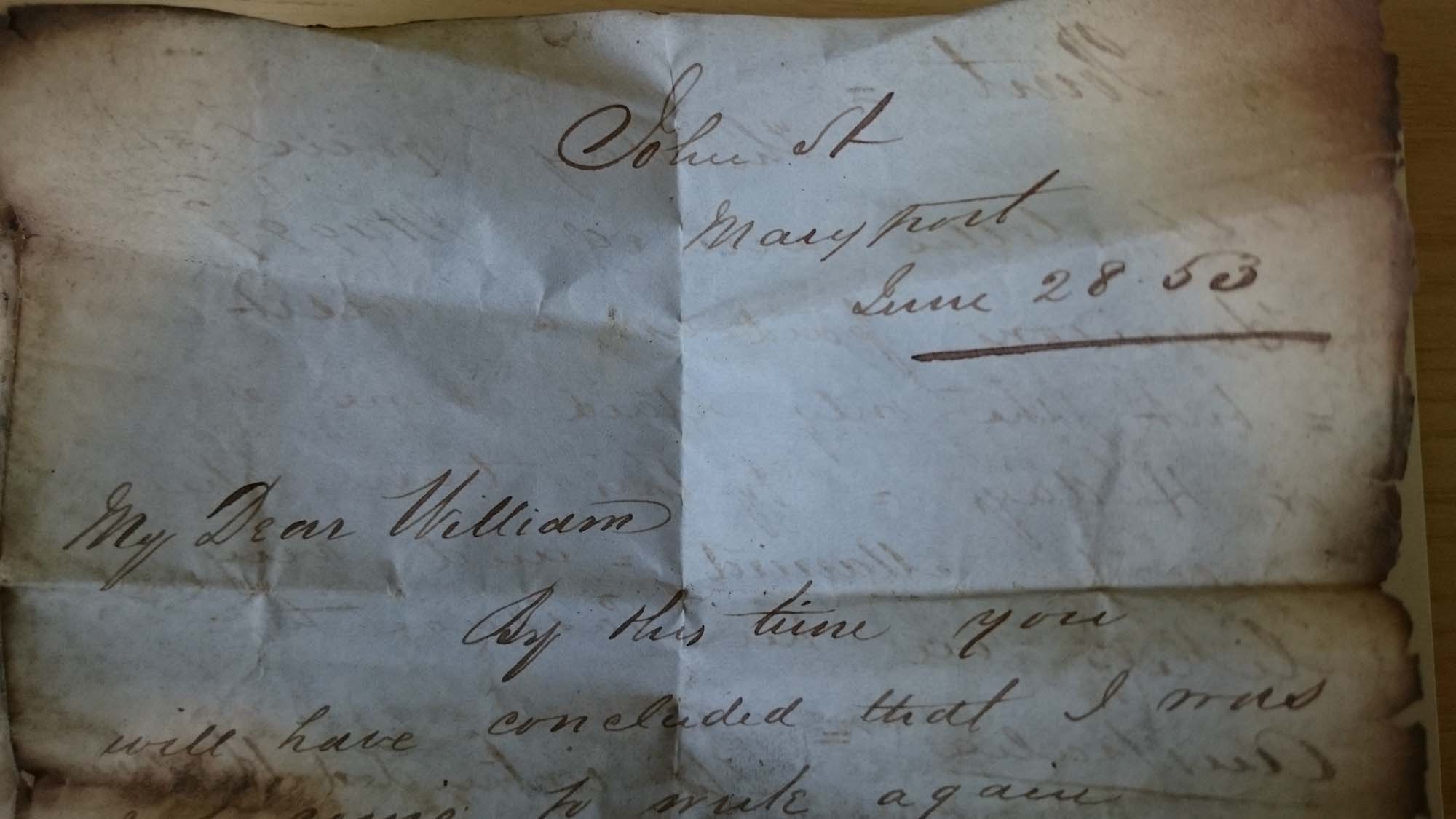 Dr Diane Duffy, researcher at Mrs Gaskell’s House on a letter recently discovered hidden in a wall that is opening a window into the lives of the famous Victorian author’s servants

We were renovating the stable block here at Elizabeth Gaskell’s House and the workmen found a letter wedged in the brickwork under the roof trusses.

It is quite badly scorched and frayed at the edges so some of the words can’t be deciphered, but it dates to 1853 and was addressed to Will Preston who very carefully folded and kept it.

Will Preston was born June 3 1825 and came from Skelwith Bridge, west of Ambleside in Cumbria. When Elizabeth Gaskell employed him as an outdoor servant, she already had two of his sisters, Margaret and Mary Preston, working for her, so she had quite a strong connection with the Preston family.

She had even stayed with the Prestons in 1849 at Mill Brow Farm in Skelwith Bridge on a visit to see William Wordsworth and Mathew Arnold’s mother who lived in the Lake District. 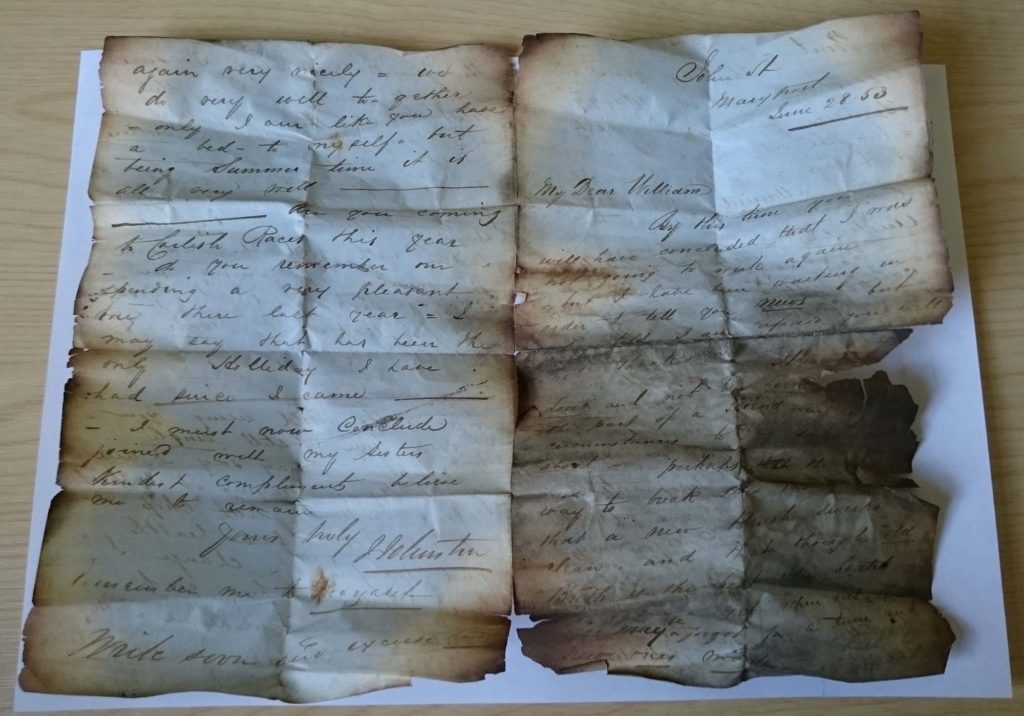 There’s a lovely letter from Gaskell’s daughter, Margaret Emily (Meta), explaining that it was quite a large accommodation: “So we shall have the bedrooms and a small parlour, and what is called in the Lake Country, “the house.”

She continued to keep in contact with the Prestons; the mother, Jane Preston, who had never been anywhere larger than Kendal before, came to visit Manchester during Christmas of 1851. Gaskell even recommended them to her friend, the London barrister, Charles Bosenquet, when he was going up to Cumbria.

Her own connections with the Lakes were very strong and famously she met Charlotte Brontë up there in 1850 at Bowness-on-Windermere in the summer lodging house of Lady Janet Kay-Shuttleworth.

Of course Elizabeth Gaskell wrote Charlotte Brontë’s biography after her death and it was Lady Janet’s husband, Sir James Kay-Shuttleworth, who went to the Brontë Parsonage and took all the important documents for her to read; the ones that Reverend Bell Nichols wasn’t prepared to give her.

But in the early 1850s in her new house in Manchester, Gaskell had a small holding with cows, pigs, ducks and hens on a piece of rented land at the back of Plymouth Grove. According to her letters, the previous person who had looked after the animals was unsatisfactory because he was ‘drunken’, and the gardener she employed wasn’t really good with animals, so she took on Will Preston to look after them and drive the pony and trap. 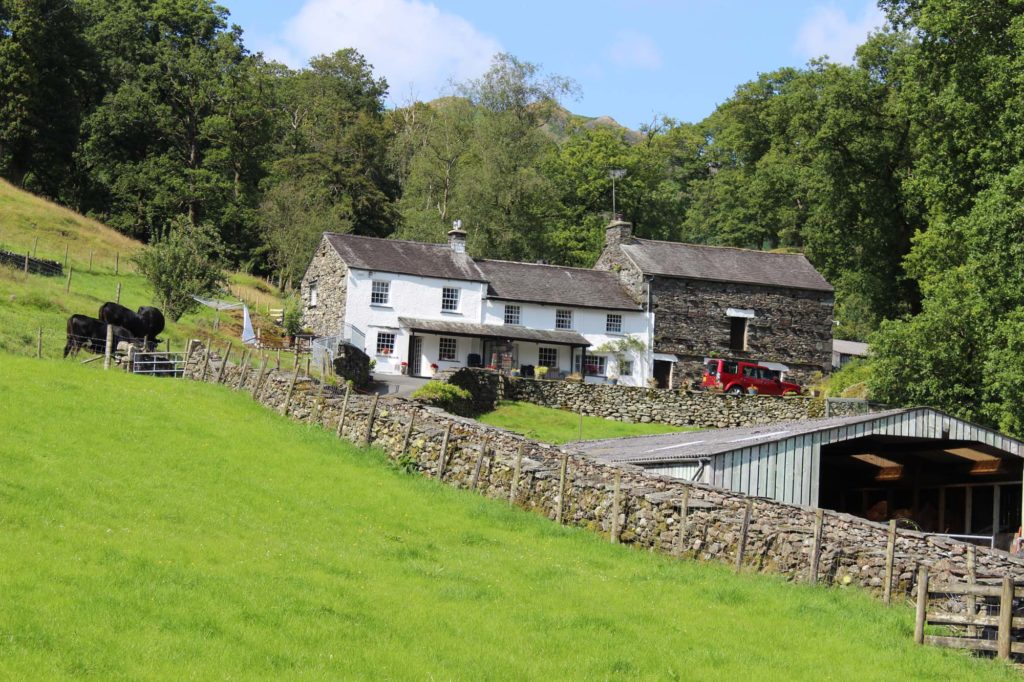 The letter sent to him during this time is dated 28th June 1853, and was written by his friend James Johnson from an address in John Street, Maryport. It gives us a fascinating glimpse into both of their lives.

James starts with “My dear William” (at first we thought it was to Elizabeth Gaskell’s husband William) and it almost sounds like a woman writing. He signs it, “Yours truly, J Johnson”, so it’s a very formal beginning and end, which I think comes from his training as a clerk. But in between there’s an informality that comes out in the little aphorisms, which are fabulous.

James tells us about his family and how he has married a girl from Ambleside, but intriguingly he also tells us that Will had a lost love called Maggie Harrison, who married another man and emigrated to Australia.

In his very first paragraph he writes:

“By this time you have concluded that I was not going to write again but I have been waiting in order to tell you news [underlined]. But when told I’m afraid you will not thank me, how sad to love and not be loved in return… a new brush sweeps clean… and that though old broth is best served when heated up again. Yet when out of sight [friends] may be forgot for a time and new ones made.”

These are old country sayings that perhaps James Johnson remembered from being a boy, but he’s clearly quite literate.

He continues: “Maggie Harrison paid us a visit but she only stayed three or four days. By this time she’ll be married and very likely on her passage to Australia. Her intended husband came with her and went out to Cockermouth to see his parents who reside there. He’s a husbandman and a very acceptable looking fellow.

“Their courtship had been a very long one, in no less than two weeks they are going to Australia as emigrants. Poor Maggie, I’m afraid she will never see her journey’s end. She was very light hearted, poor delicate girl, she little dreamt of the hardship she had to undergo.”

Then he writes, “I wish them luck and good luck and then perhaps if she ever returns to England laden with gold she may be the means of gaining you a good shop and a good man’s slippers to wear if he ever gives over wearing them, hey ho.” 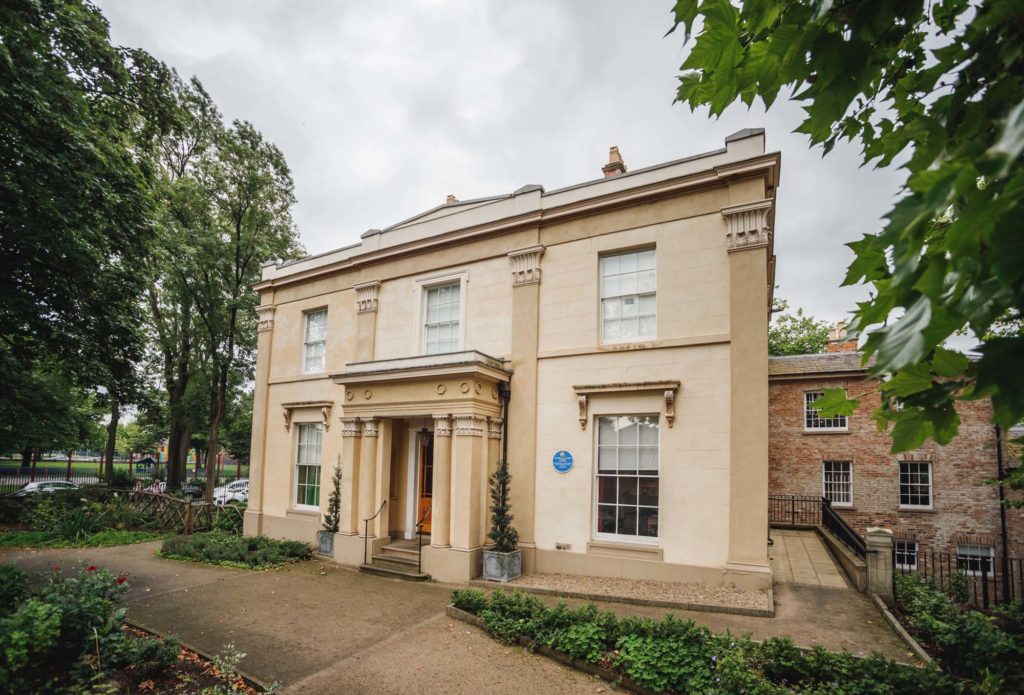 It was found in what would have been Will Preston’s private space – his bedroom in the stable block. He may well have hidden it from his girlfriend, Margaret Huddlestone, who was also working at Mrs Gaskell’s house.

Margaret came from Elterwater, which is the next village to Skelwith Bridge and the couple married in 1854 at Manchester Cathedral, which was the collegiate church at the time. Margaret was pregnant with their first child Thomas, who was born in Manchester while they were both working at Mrs Gaskell’s. The infant was named after William’s father.

We think Mrs Gaskell had a good relationship with her servants. She tended to employ those recommended by her friends and seldom advertised for staff. I think she was very careful who she employed. By this time she had already published Mary Barton (in 1848) and in 1852 she was publishing Cranford in Household Words, so she was quite a well-known name by that point.

She was also a Unitarian and very particular about cleanliness and punctuality, but she was generally very fond of her servants. Some she hated – like Sarah and the ‘Dripping Women’ for instance.

The Preston’s father was a farmer and we think there were at least nine children in the family and at this time – as Mrs Gaskell writes in her novels – there was not a great deal of work in the agricultural economy. Skelwith Bridge is not very big, back then it had a wood turning mill, a corn mill and an inn. So presumably the family were quite keen that Will and his sisters should find employment with Mrs Gaskell, who treated them well.

Will Preston’s sister Margaret married in 1856. The bridegroom was a Roger Knowles who originated from Sedburgh but who was working as a farm servant in the Lake District, and they went back to live there. They had nine or ten children but Margaret came back to see Mrs Gaskell after the marriage.

There was also another sister, Eleanor Preston, who went down to London to be a servant to two young men and their sister who were originally from the Lakes, and Mrs Gaskell became worried that she was going to be seduced. She’d heard bad stories so she sent Margaret down to London (Will Preston was apparently too easy tempered) to rescue Eleanor and bring her back up to Manchester. 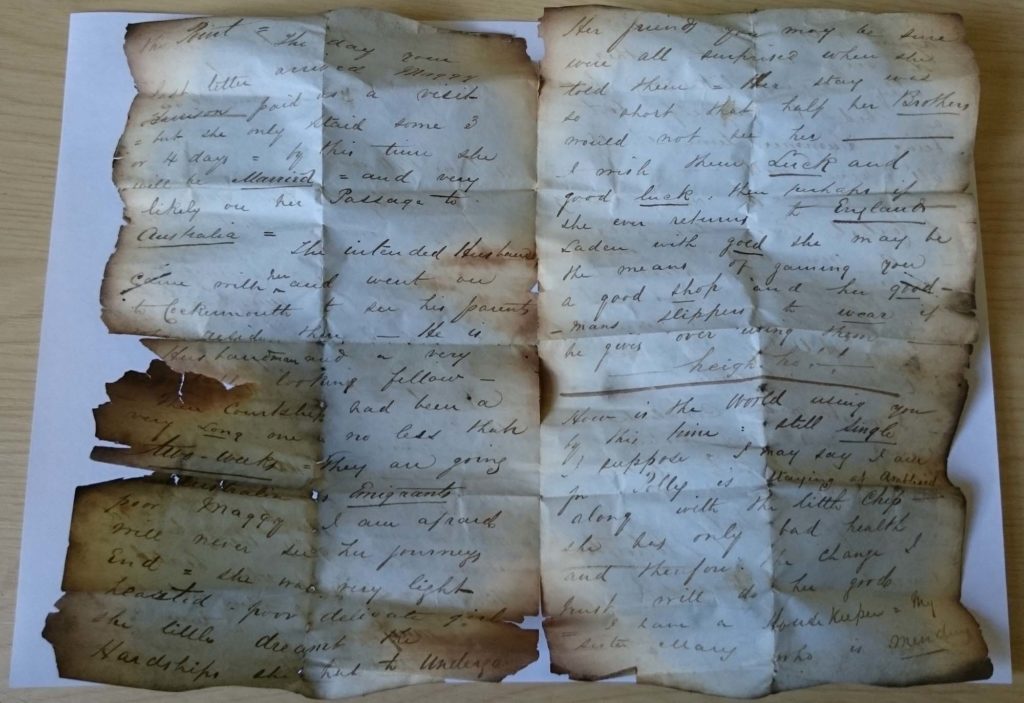 As for James Johnson, by 1858 we know he was working as a clerk at Wilkinson and Bass, Coal Proprietors & Merchants at Flimby Colliery in Maryport. The 1861 census lists him as a colliery accountant at Risehow Colliery, so clearly he was numerate as well as literate.

We now know that James was born near Hawkshead. His father was a gardener at Green End House in Claiffe, which is only six miles down the road from Will’s home in Skelwith Bridge, so I think it likely the boys had known each other a bit longer than that chance meeting at Carlisle Races, which James tells us they’d attended together the previous year.

Going back to the letter he writes: “Are you coming to Carlisle Races this year? Do you remember us spending a very pleasant day there last year? I may say that has been the only holiday I had since I came to Maryport”.

He also mentions his sister Mary alongside his wife Polly, a Mary Kendall from Ambleside, whom he married in Whitehaven. “And I have a housekeeper, my sister Mary, who is mending again very nicely. We do well together. ”

Will Preston left Mrs Gaskell’s House in 1856 and went back home to Skelwith Bridge, to work at Skelwith Fold Farm; we have got records of two or three children being baptised at the local church there – on the Lancashire side of the river. 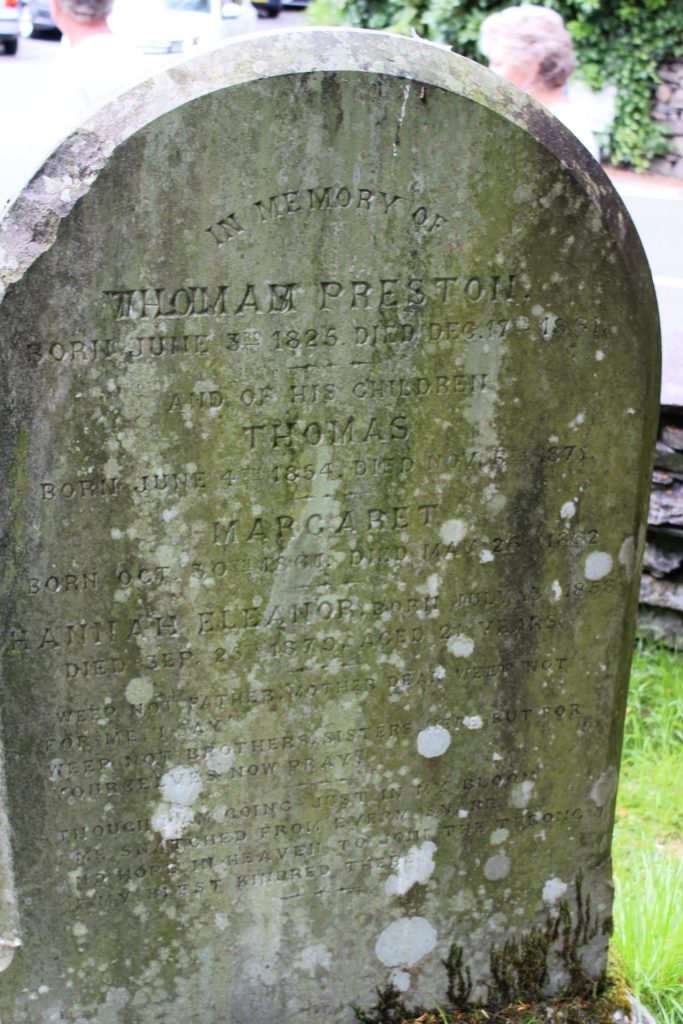 Sadly, he was only in his thirties when he died on December 17 1861. His grave is in the churchyard in Grasmere where William Wordsworth is also buried. An article in the newspaper about his death reveals how he worked at the farm for a while then went back to work at Skelwith Bridge. We think he was living in the house next to the inn, which was then The Hare and Hounds and is now the Skelwith Bridge Hotel.

Will died after a long illness of two years and eight months, but whether this was consumption as they called it then, or whether it was an accident at work, I don’t know.

His wife died two years later leaving their young children. Sadly none of them lived very long – the oldest was 25 when he died.

An interactive exhibition at Mrs Gaskell’s House explores in detail the lives of some of the individual servants that worked for the Gaskell family including Will Preston from Cumbria.

84 Plymouth Grove Manchester ‘We've got a house...it certainly is a beauty...I must try and make the house give as much pleasure to others as I can.’ Elizabeth Gaskell, in a letter to her friend Eliza Fox in 1850. The House, a Grade II* listed property, was built between 1835-1841…