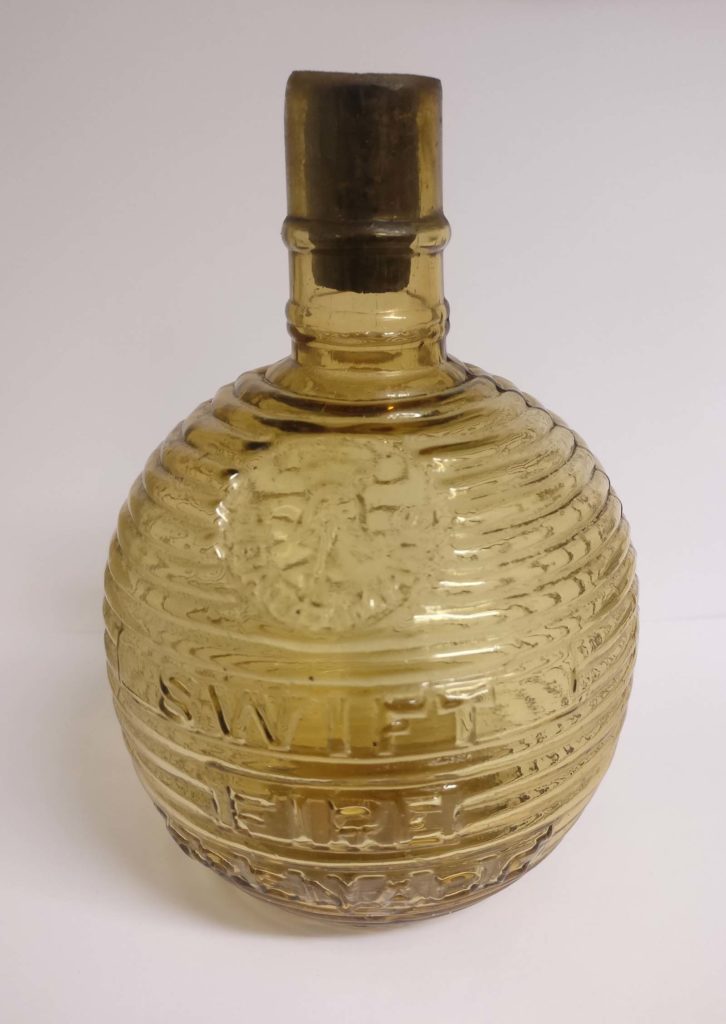 When they were first introduced in the nineteenth century, Glass Fire Grenades were produced as decorative glass bottles with a bulbous bottom, long neck and usually patterned with the company name on them. So they are actually very pretty – for something designed to put out a fire.

We have 21 examples of them in the collection of the London Fire Brigade Museum.

The earliest ones date to c.1880 and were filled with salt water, a mix of common table salt and ammonium chloride, which in theory is useful because salt water doesn’t freeze under normal conditions and the heated ammonium chloride produced fumes that should help to suppress the fire.

However, you are only talking about a pint of liquid in them, so they are quite small and their effectiveness is uncertain.

There were two main methods of using them; you either had them at grab height in a metal rack, which allowed you to pick them up and throw them at the base of the fire, or in larger homes and workplaces they were suspended from the ceiling in special brackets. The heat would cause wax parts to melt or the glass to break, and a deflection component would distribute the contents like a form of sprinkler. 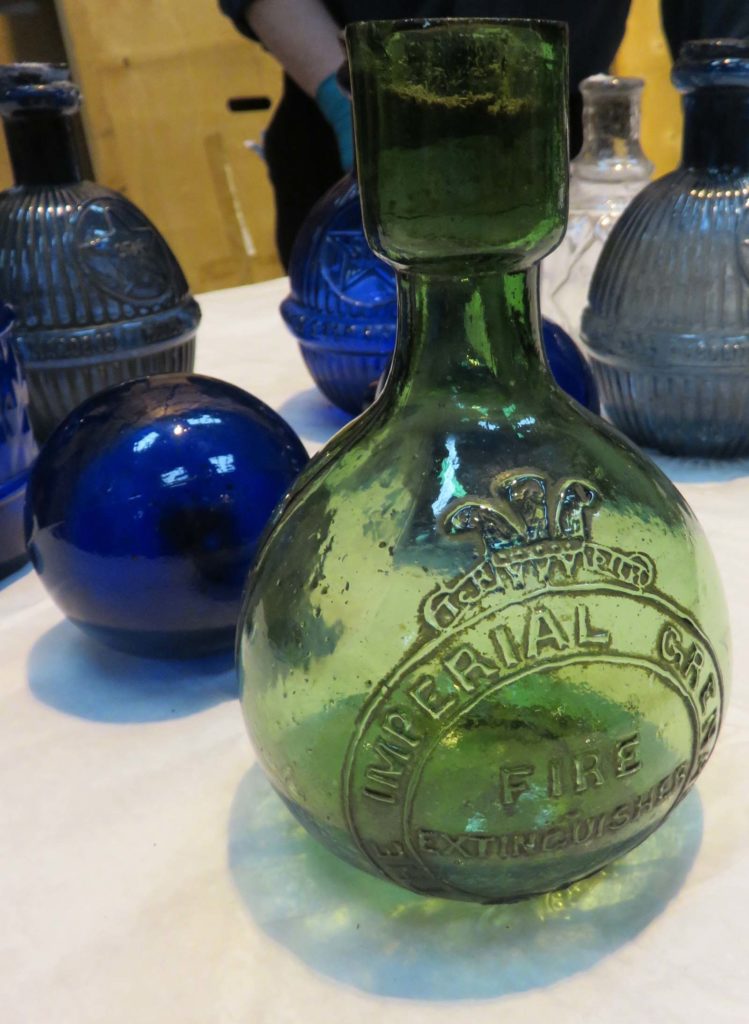 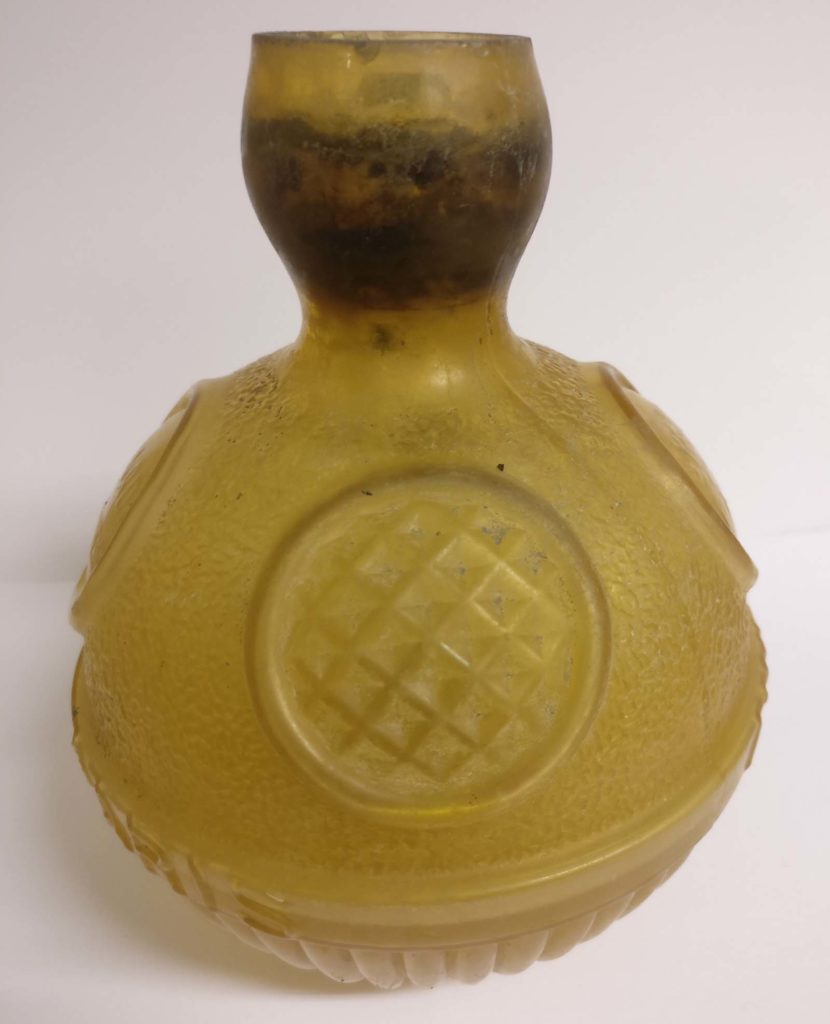 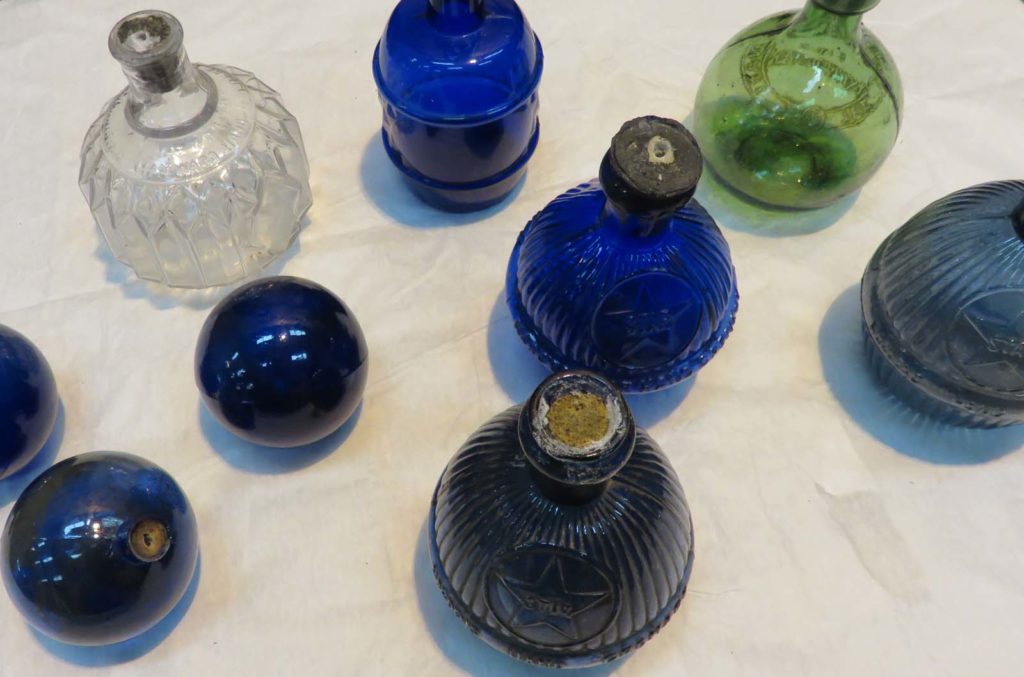 Fire Grenades filled with salt water were used until about 1900, when they moved over to filling them with carbon tetrachloride, sometimes called carbon tet, or CTC, which at room temperature is a liquid but when heated to about 76C becomes a gas. The gaseous carbon tetrachloride has a higher density than air so it sinks and helps smother the flames.

However, carbon tetrachloride was used in lots of different processes including industrial dry cleaning as a de-greasing agent and they found through studies that people using it had higher rates of cancer and that you could get lung, kidney and liver damage from it through inhalation or touch.

That was dangerous enough, but at 200-400C carbon tet also reacts with water to form phosgene gas, which was used as a chemical weapon in World War One. It is said that 85% of the 900,000 deaths attributed to gas were from phosgene so it was a pretty dangerous substance to have in your home or factory.

Anecdotally several versions of them were purported to be used by the Royal family and the Imperial Fire Extinguisher Company said that their fire grenades were used in Sandringham around 1886. 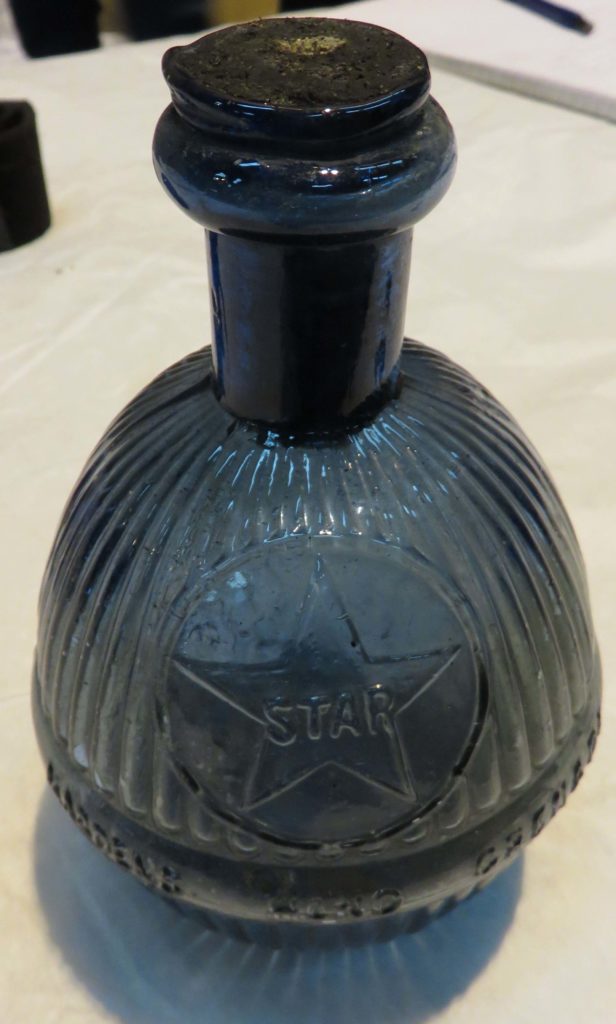 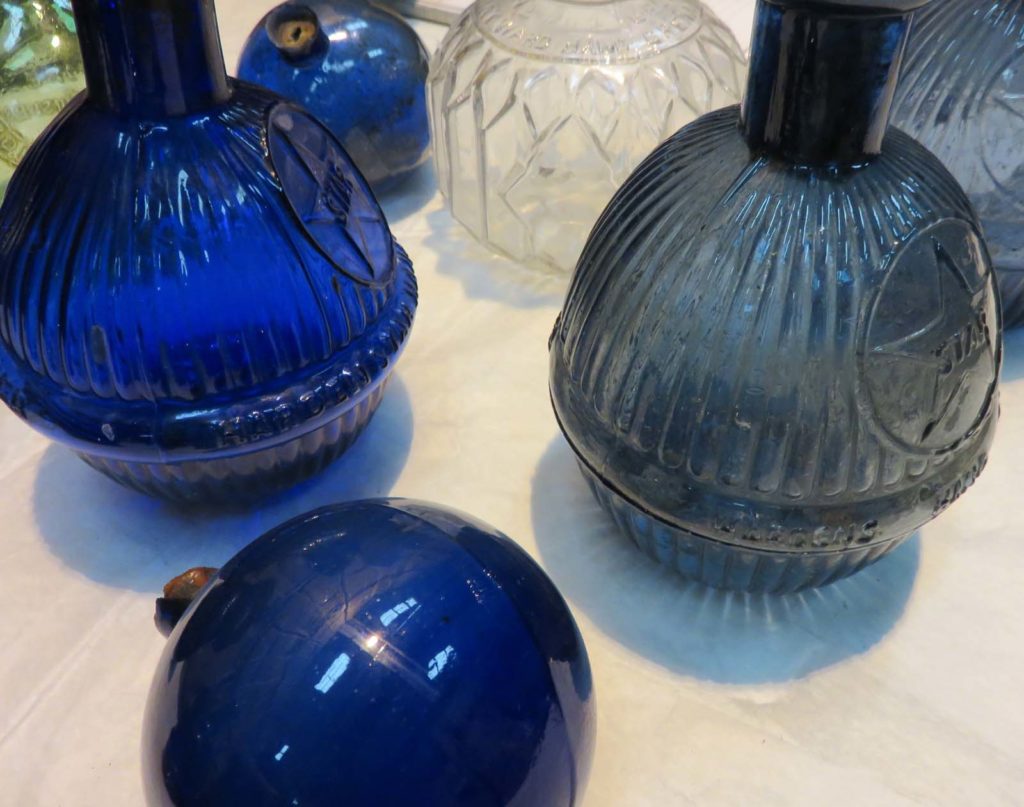 The makers of the Harden Star Grenade, which was produced in a beautiful royal blue coloured bottle, even carried out a ‘Royal demonstration’ near the Savoy Theatre. Their adverts said it was obtainable from ‘all respectable iron mongers, house decorators and furnishers’.

Despite their shortcomings they stuck around for forty odd years as a concept – although they did change in design, with the ornate bottles evolving into something more basic, with clear or frosted glass and no mouldings.

Now, as we move to a new museum these often forgotten objects will feature within the story of London Fire Brigade, which is a rich and varied history, touching on the major turning points in London’s history that reveals how fire can have a massive impact on its communities and the cityscape.

One of the focusses of the new museum will also be to tell the story of fire safety so that people understand that it starts at home and at their place of work. We will be making the displays accessible for all so everyone can really understand its importance and these small objects are really significant within that message.

London Fire Brigade is planning a brand-new museum which will showcase our unique and exciting history with varied exhibition galleries, offer a huge variety of events and activities for all ages and allow us to show even more of our historic vehicles and artefacts like our glass fire grenades. We are currently running as a virtual museum whilst our complex redevelopment plans continue. 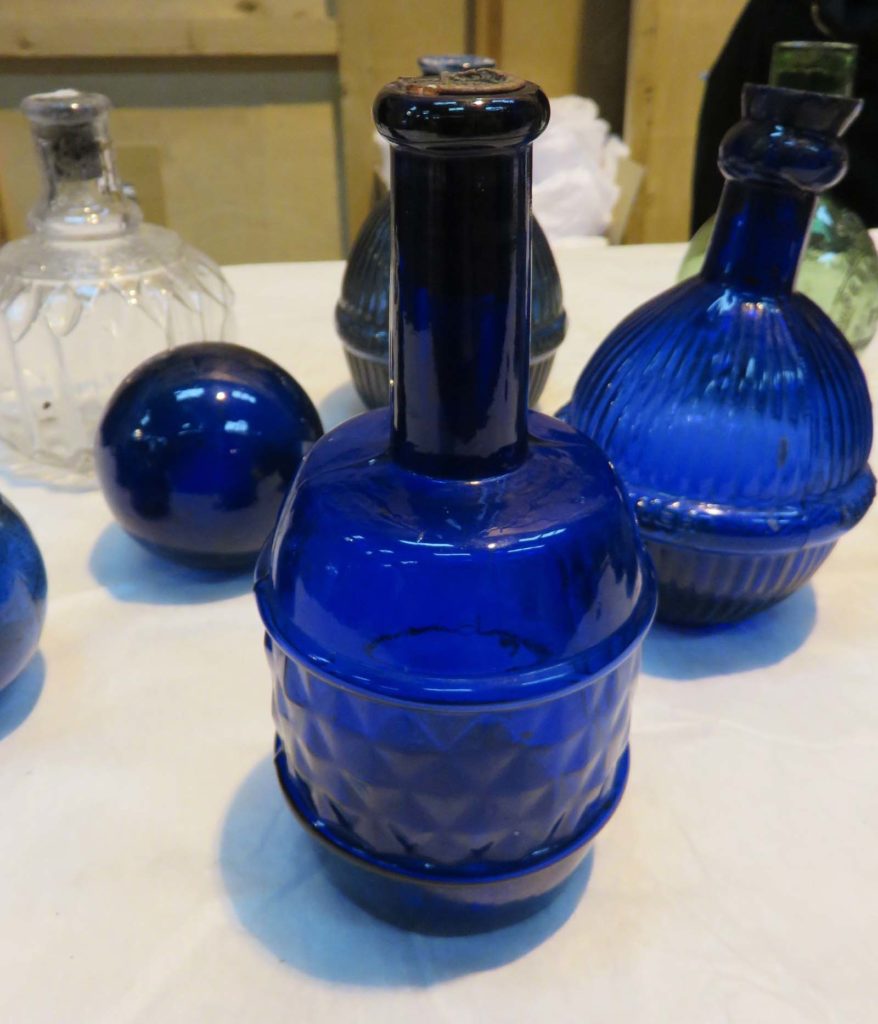 London Fire Brigade Museum is currently running as a virtual museum whilst our complex redevelopment plans continue. Sign up to our monthly digital newsletter and we’ll be in touch with our latest news and insights into our fantastic historical collection of over 20,000 items. https://www.london-fire.gov.uk/museum/museum-newsletter-sign-up/