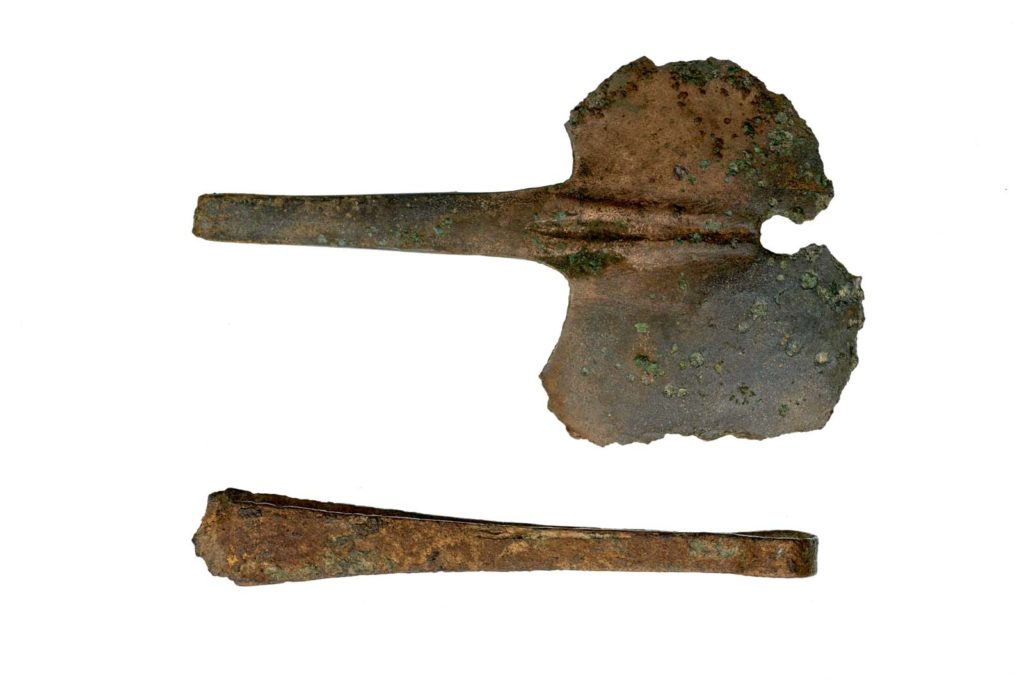 It is the vast hoard of socketed axe heads that grab the attention in the spectacular Bronze Age Havering Hoard, which is finally going show at The Museum of London Docklands after its Covid-19 hiatus.

But hidden within the hoard’s 453 bronze objects, dating between c.900 and c.800 BC. are even rarer treasures – like a double-sided razor – which offers an insight into the shaving habits of our hirsute Bronze Age ancestors and the centuries-old practice of male grooming.

Stone Age man may well have used clam shells to pull out his beard hair, but by the time of the Bronze Age the practice of male grooming was a much more refined and slightly less painful process – having progressed through sharpened shells and flints through to double sided razors made of Bronze for scraping and sculpting the facial hair of the warrior elite.

Archaeologists also suggest the razor was an important part of Bronze Age male identity – as much as riding implements and weapons – and was used not only in revealing the face and sculpting beards and moustaches but also in body modification. 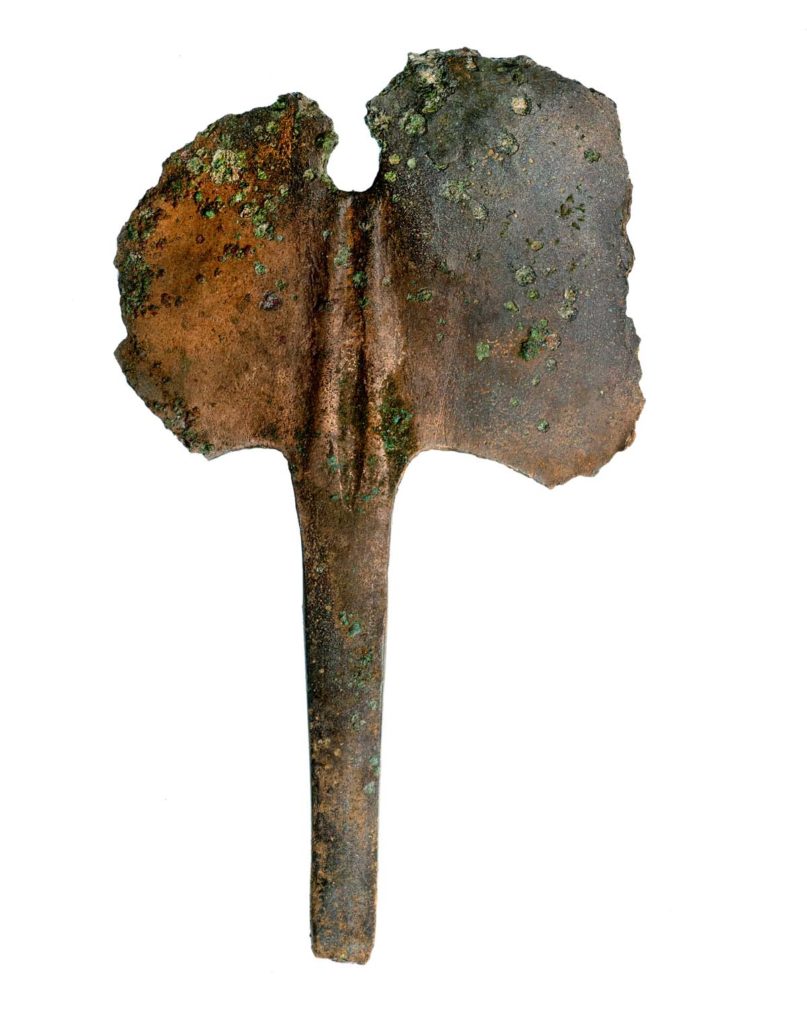 Double-sided razor from the Havering Hoard. Copyright Museum of London 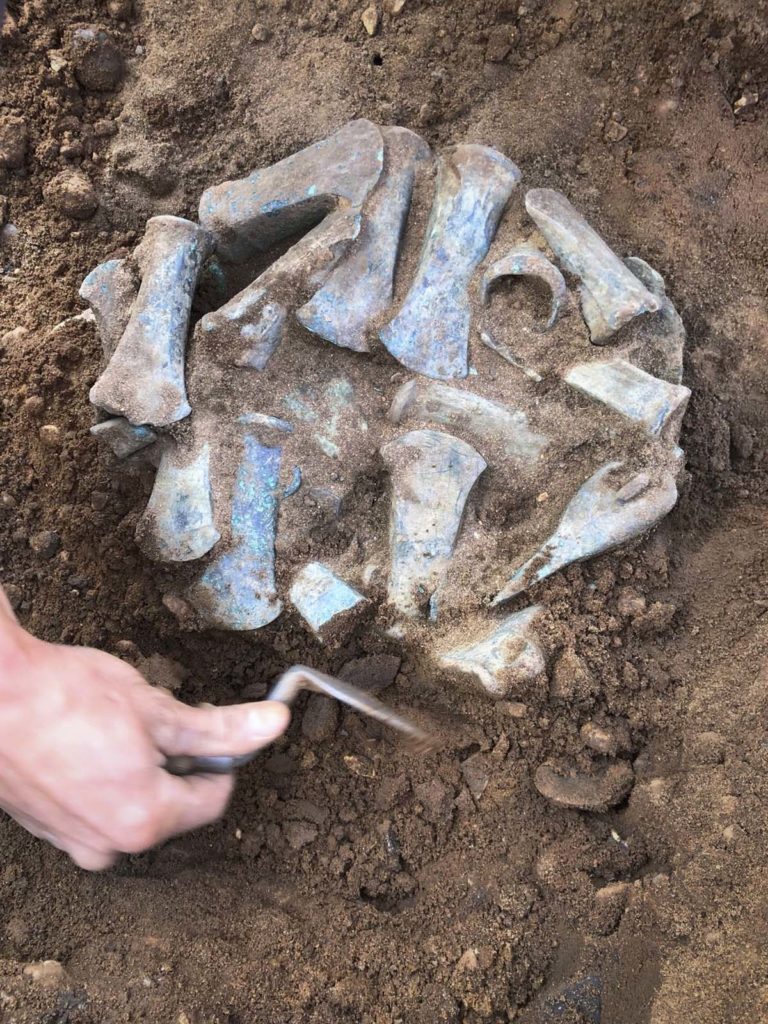 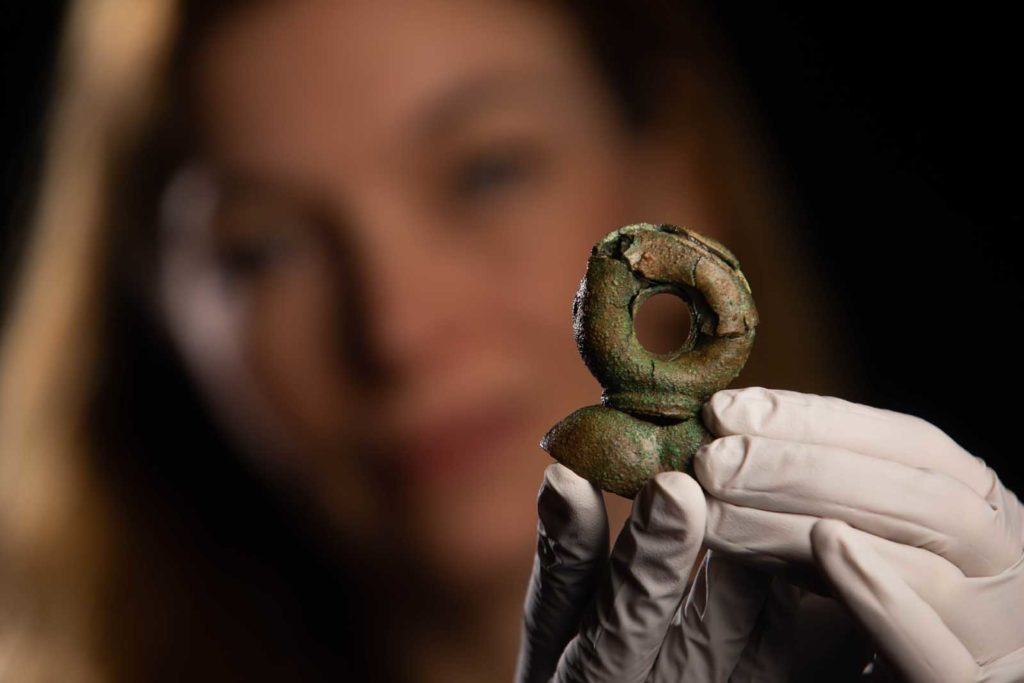 These are among the many theories suggested by the objects in the Havering Hoard.

Consisting of weapons, tools and other unusual objects rarely found in the UK, the internationally significant find was uncovered in four separate burials during a planned archaeological investigation in Havering – overlooking the Thames – towards the end of 2018.

Its deliberate placement and close proximity to the river quickly raised a number of questions around who buried it, for what reason and why it was never recovered.

And, as well as the razor and the impressive selection of socketed axes, many of which appear to have been deliberately damaged before their internment, the hoard yielded a pair of terret rings, a rare discovery as these are the first Bronze Age examples of their kind ever to be found in the UK.

These objects are believed to have been used to prevent the reins from tangling on horse-drawn carts, giving us insight into how people and goods may have travelled cross-country.

The find also included a loom weight, spindle whorl and pin – suggesting the presence at the site of textile production via spinning. 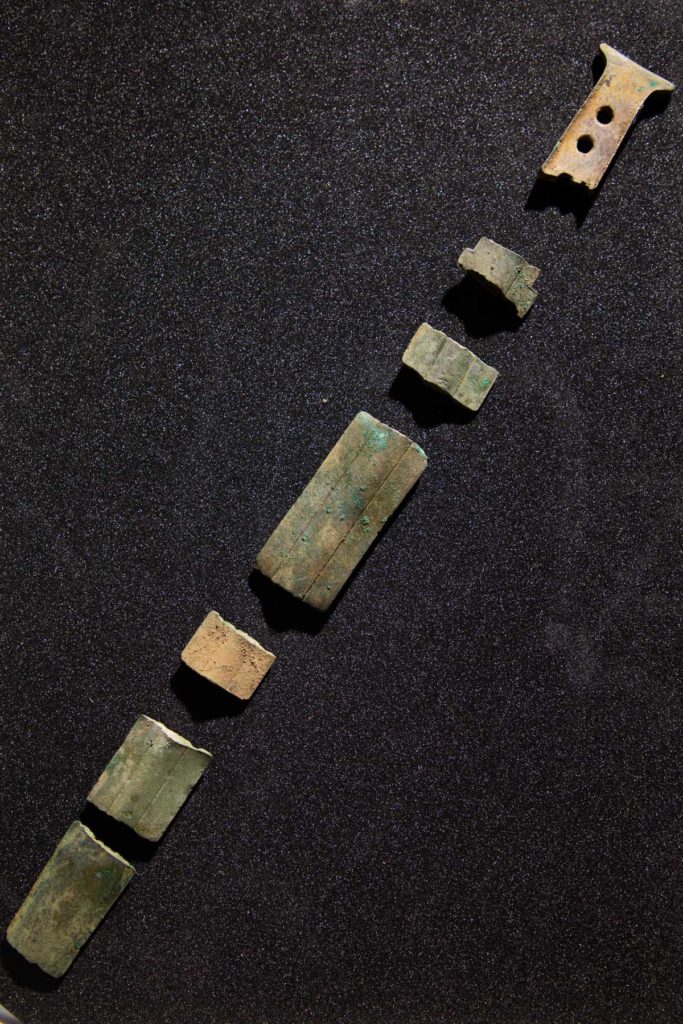 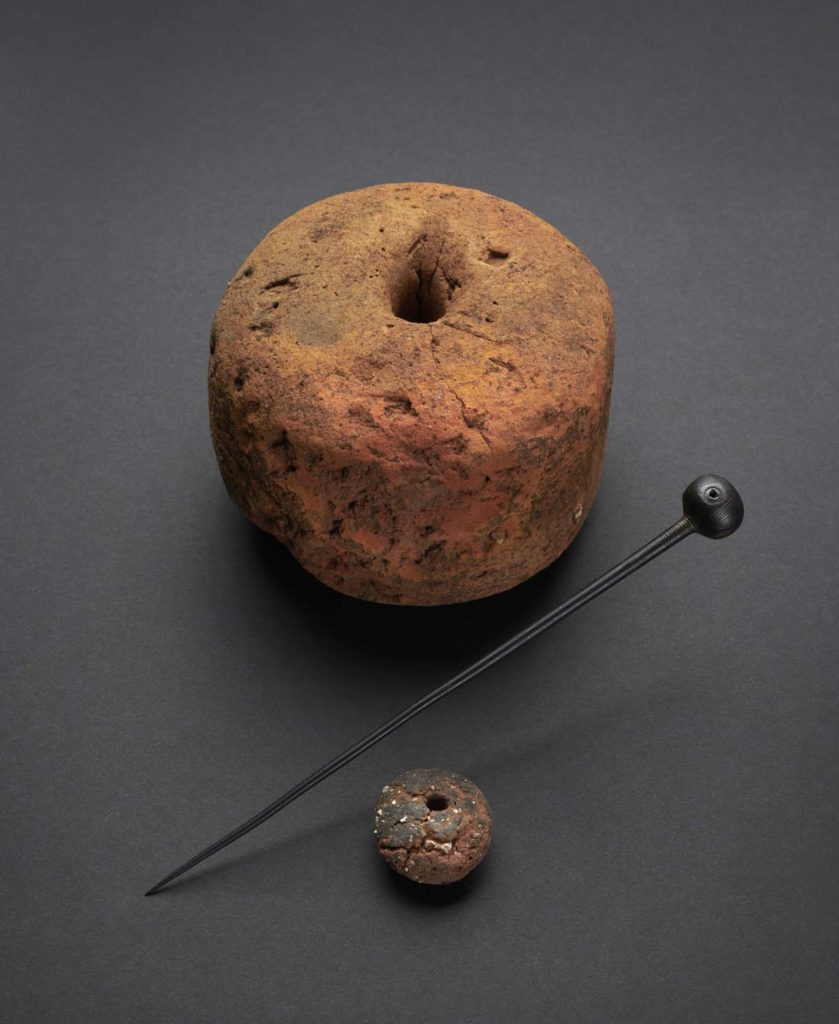 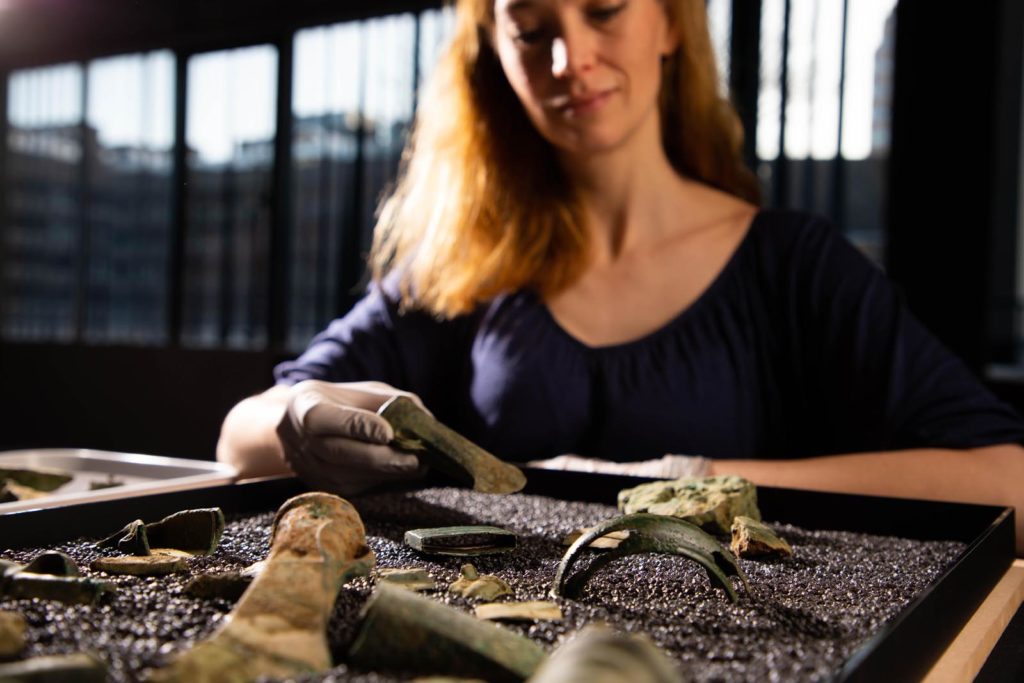 “This is a hugely significant archaeological find that adds valuable new information into a fascinating moment of London’s past,” says Kate Sumnall, Curator of Archaeology at the Museum of London. “However, it also raises a number of intriguing questions around its burial and the people behind it.”

Sumnall, who has been working with colleagues at the museum together with the dig consultants Archaeological Solutions, as well as Historic England and Havering Museum to develop the exhibition, says it starts with the moment of discovery before taking visitors “on a journey back through time exploring the stories the hoard can tell us.”

With all 453 objects on display alongside objects from the museum’s collection, these stories paint a picture of life during the Late Bronze Age when the land where London now exists was a very different place – even though the grooming practices of our Bronze Age ancestors may seem surprisingly modern.

As well as the razor, the presence of a pair of tweezers in the hoard may suggest an even finer tuning of Bronze Age Man’s facial hair, although there is as of yet no evidence of moisturiser, beard oil or exfoliating facial scrub, but that’s not to say prehistoric Britons didn’t have an equivalent.

Havering Hoard: A Bronze Age Mystery is at Museum of London Docklands from Friday September 11 2020 – until Sunday April 18 2021. Free with timed entry ticket to the museum. See www.museumoflondon.org.uk/haveringhoard for booking details.

From Roman settlement to the development of Canary Wharf, this 200 year old warehouse reveals the long history of the capital as a port through stories of trade, migration and commerce.

2 comments on “The best a Bronze Age man can get: The Havering Hoard and prehistoric shaving”