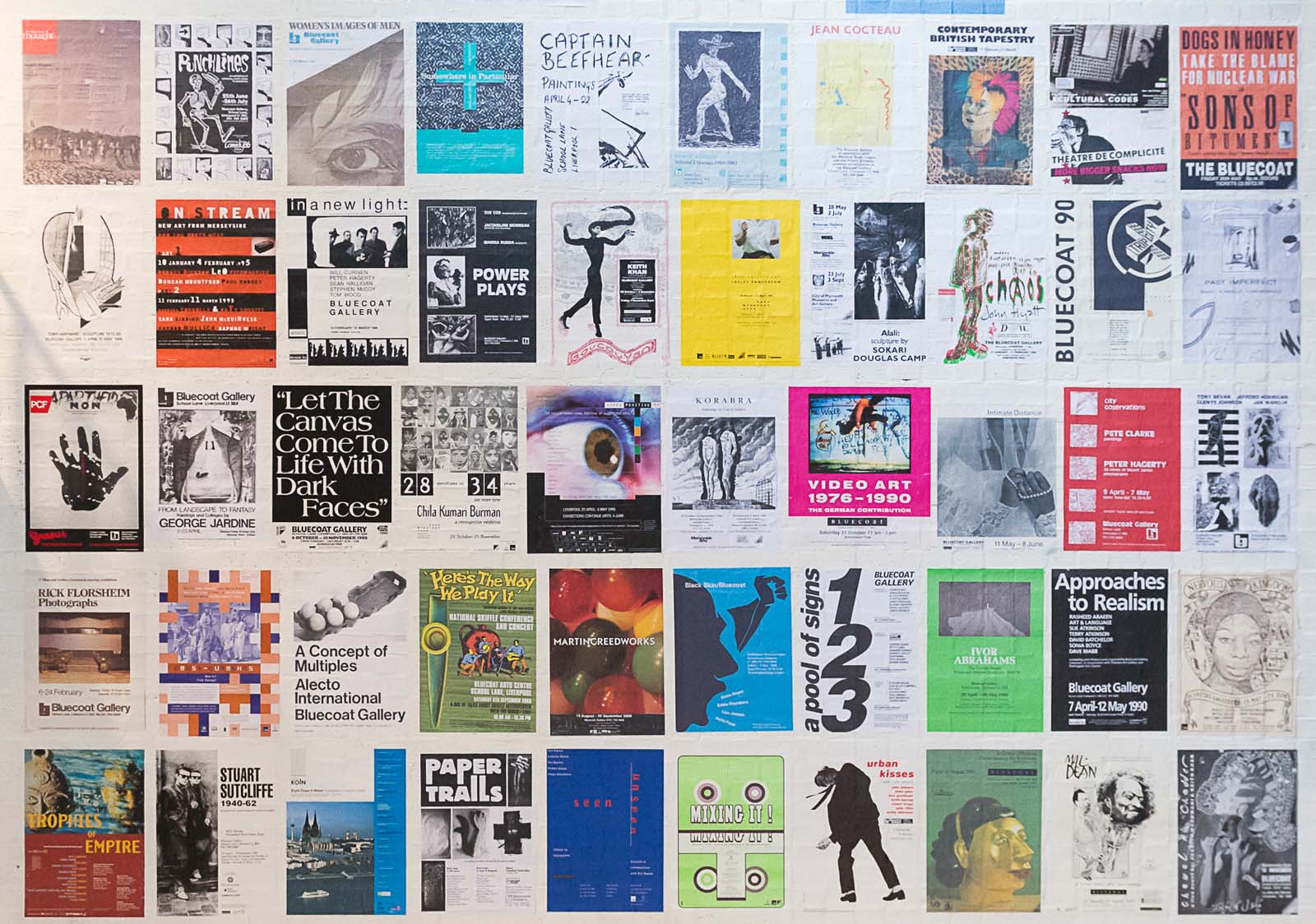 The Bluecoat has digitised its archive to celebrate the 300th birthday of its architecturally significant building, and it’s full of interesting stuff. We’ve picked 15 favourites that tell the history of the building and the general goings on at this Liverpool city centre oasis of art – brilliantly described by one person as the place “where the avant-garde meets the village hall”

From school to art college 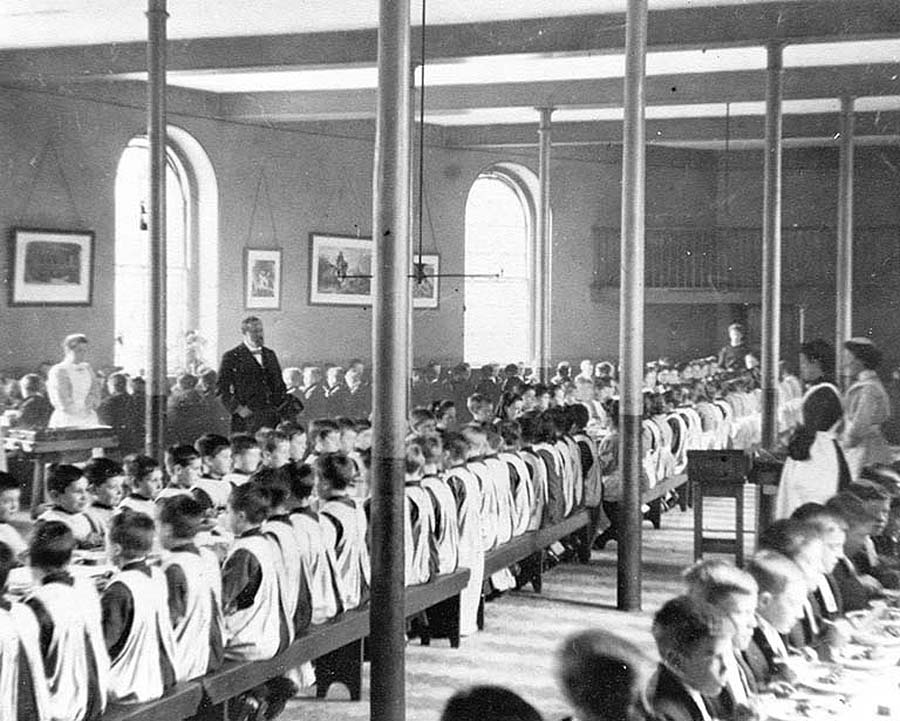 The Bluecoat school was founded in 1708 by Bryan Blundell and the Rev Robert Styth, as a school for poor children and moved to the present Bluecoat Arts Centre in 1718. After nearly 200 years of occupancy, the School moved in 1906 to new, larger premises in suburban Wavertree. This picture from 1890 shows the school refectory, occupying the central block of the building, which now houses Bluecoat’s Tickets and Information and Espresso.

The arrival of the Sandon Studios Society 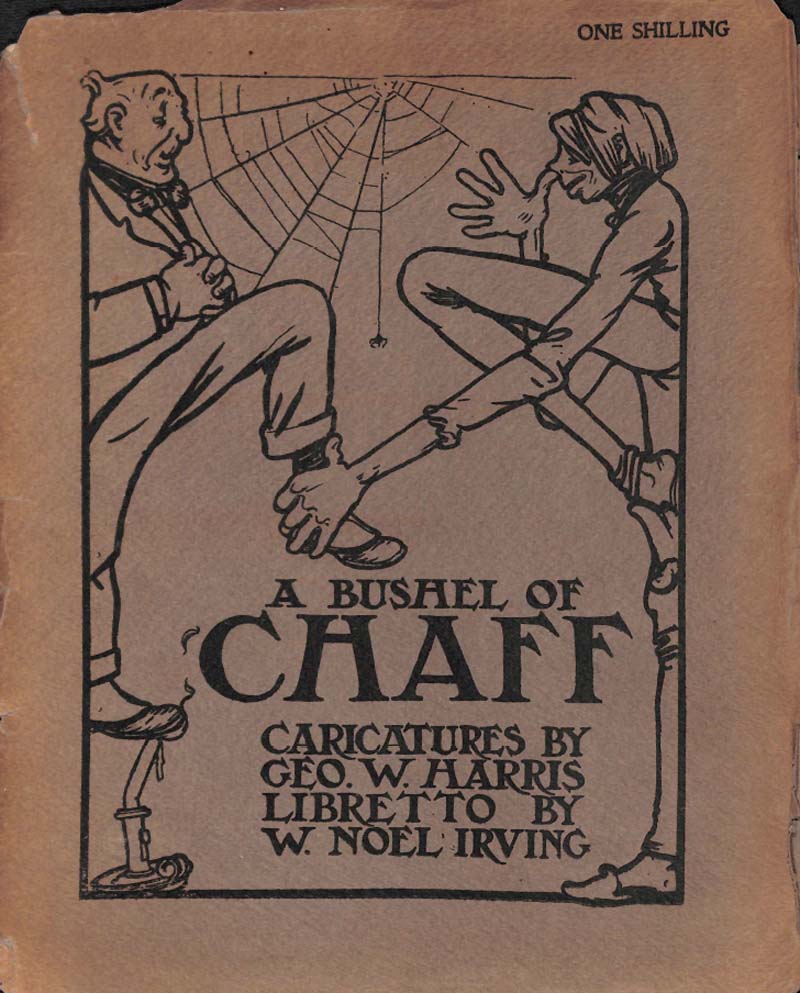 The Sandon Studios Society, an independent art school in formed in 1905 by a breakaway group of students from the Applied Art and Design Department of the University of Liverpool, moved into the vacant Blue Coat School building in 1907. In 1911 they staged a now famous exhibition showing Post-Impressionist works outside London for the first time alongside their British counterparts.

This satirical publication, A Bushel of Chaff, dates to 1912 and comprises George Harris’ cartoons and W. Noel Irving’s text. Considered scurrilous when the two Sandon jokers published it in 1912 it took pot shots at Liverpool’s cultural and political institutions, although its humour is largely lost to us today, it includes a debate on Post-Impressionism, and a reproduction of one of the Futurist manifestoes.

When they weren’t shocking the establishment the Sandon artists were having a good time. George Harris (1878-1929) had a successful career in Liverpool and London as a theatre designer, as well as working in New York. Always returning to his beloved Bluecoat studio, he designed sets and costumes for Sandon parties and cabarets and was a prolific caricaturist. This dates to the 1920s and is for the Annual Sandon Cabaret. 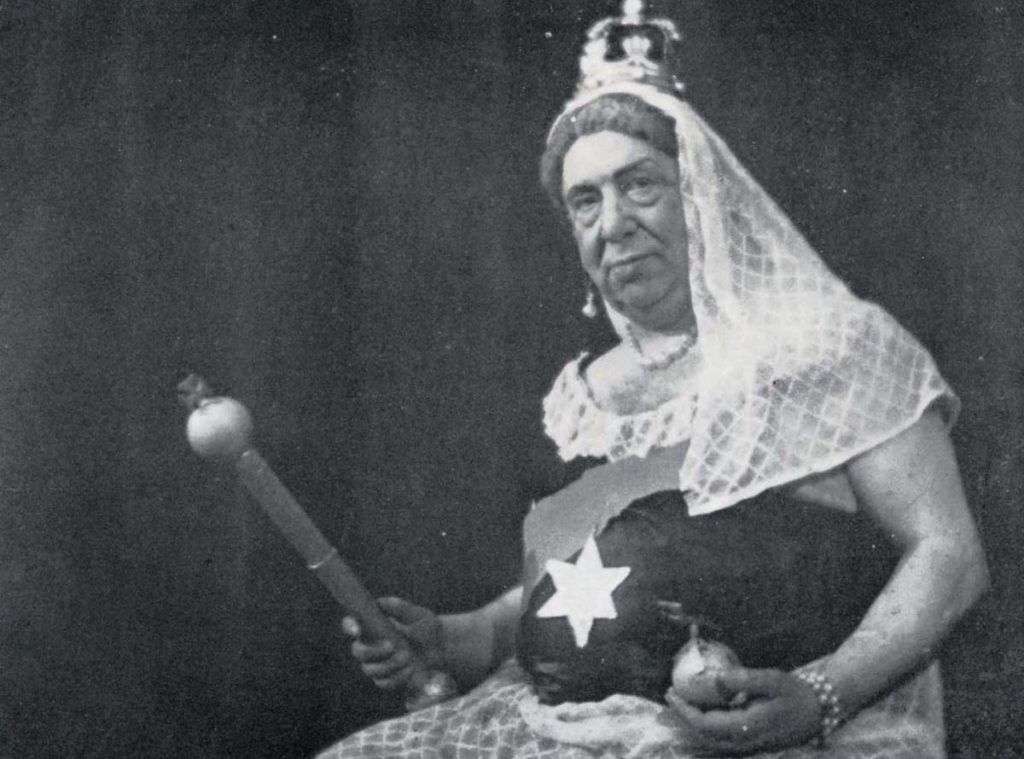 Henry Carr, RA RP RBA (1894 – 1970) was a prominent Sandon Studios Society member, and a successful British landscape and portrait painter, who served as a war artist during the Second World War. Pictured here probably at a Sandon fancy dress party, Carr was one of the Society’s more entertaining members, and was described as a ‘painter, farmer and philosopher.’ 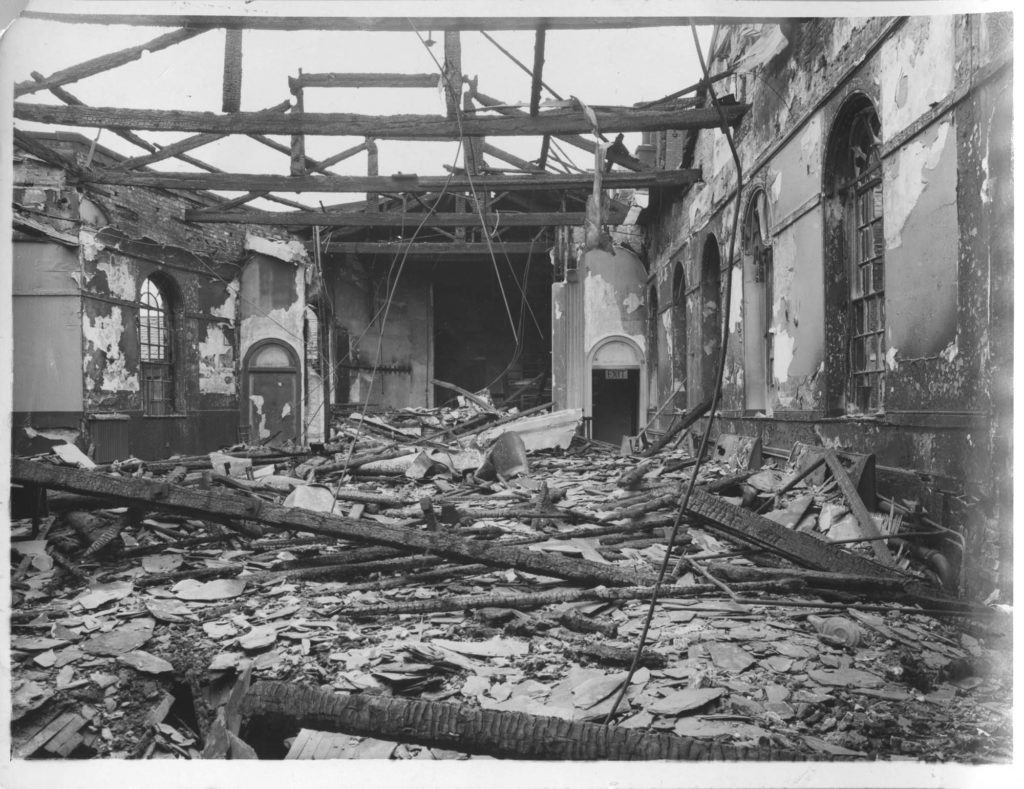 During the Second World War, the building was severely damaged during the Merseyside blitz of 1941, and it wasn’t until 1958 that it was fully restored to its former glory. 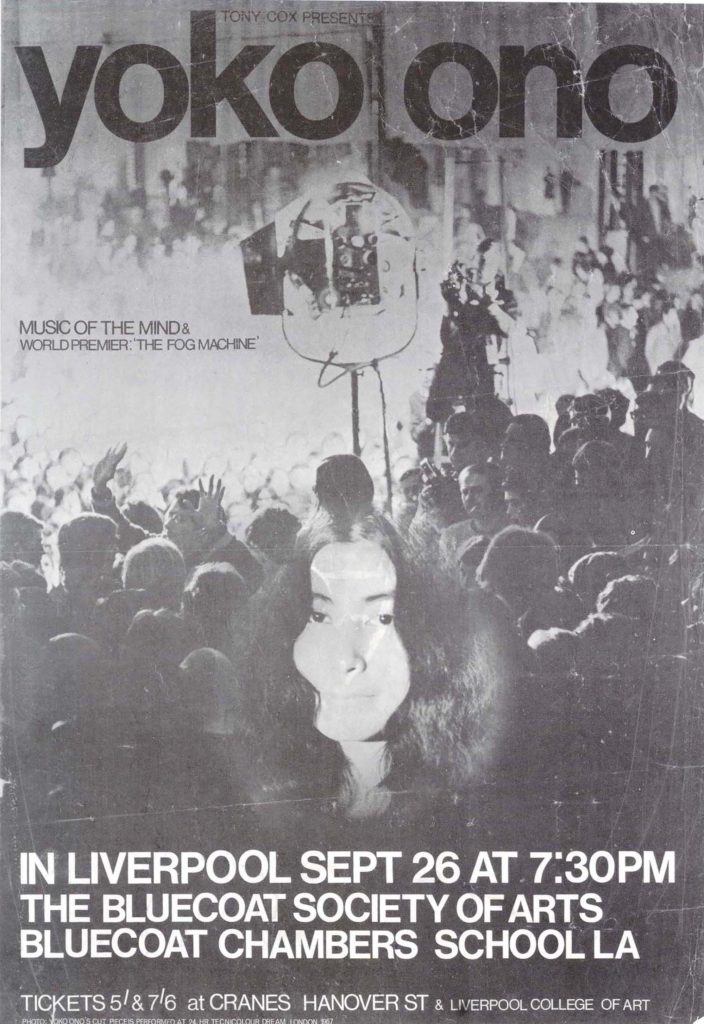 Fast forward to the 1960s and the Bluecoat firmly had re-established itself as a cornerstone of Liverpool’s artistic life. Yoko Ono’s 1967 event was promoted by Art School lecturer Dave Clapham and attracted a sold-out audience. The programme, Music of the Mind and the world premiere of The Fog Machine, was filmed by Granada TV for a news feature. It shows a packed Concert Hall and an enthusiastic response to this Fluxus event by the, then, little-known Ono, who returned to Bluecoat for its reopening in 2008. 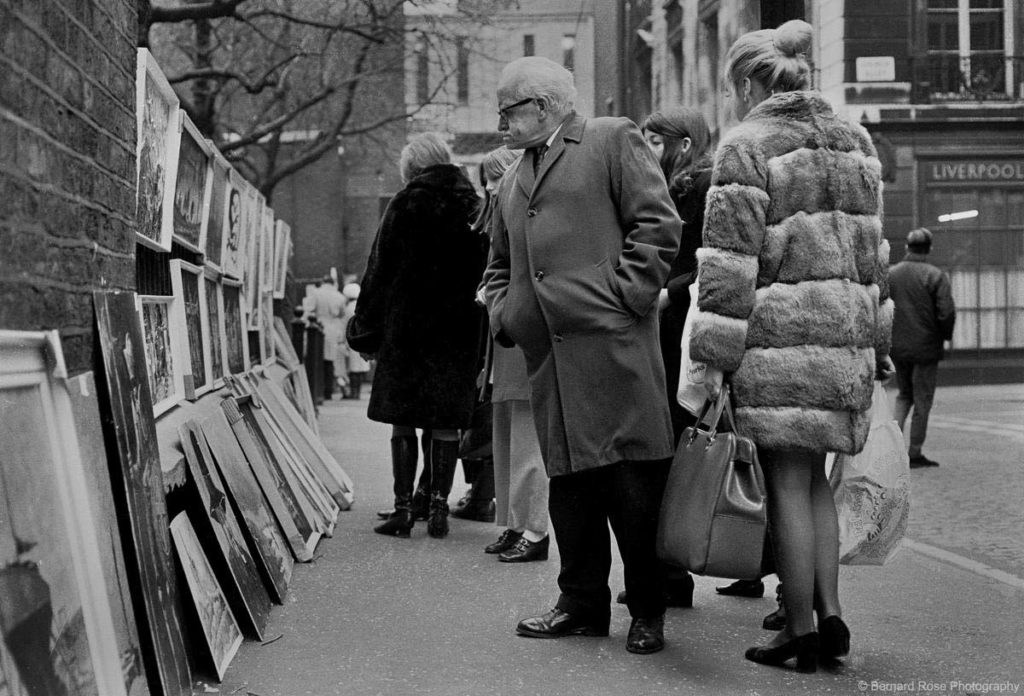 Started as a protest in 1968 by Arthur Dooley at the perceived exclusion of Liverpool artists from the Bluecoat gallery programme, the railings became a popular site for artists to display their work on a Saturday, a tradition that continued until 2005. Photo: copyright Bernard Rose Photography. 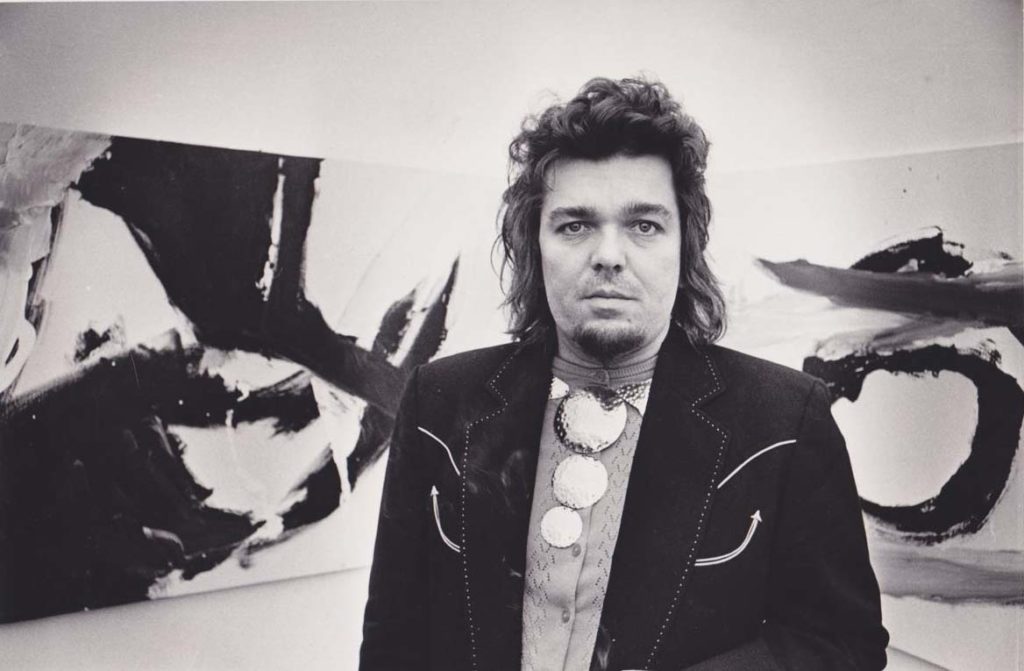 1792, Captain Beefheart at the Bluecoat Gallery.

Yoko Ono wasn’t the only artist with Rock n Roll connections to come to the Bluecoat, here’s US rock musician Don Van Vliet, aka Captain Beefheart at his first ever art exhibition. Forty five years later, his achievement as ‘total artist’ was the subject of a weekend celebration at the arts centre in 2017, when a film by the Bluecoat gallery director who arranged the 1972 exhibition, Lucy Cullen, was presented, giving her recollections of the exhibition and the artist. Photo: courtesy of Lucy Cullen. 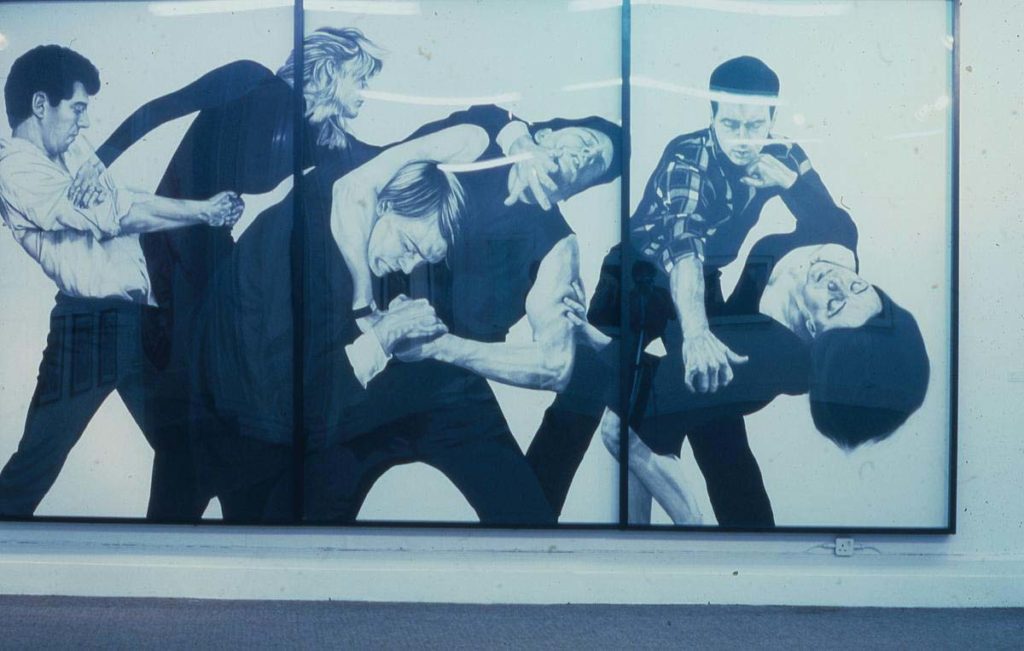 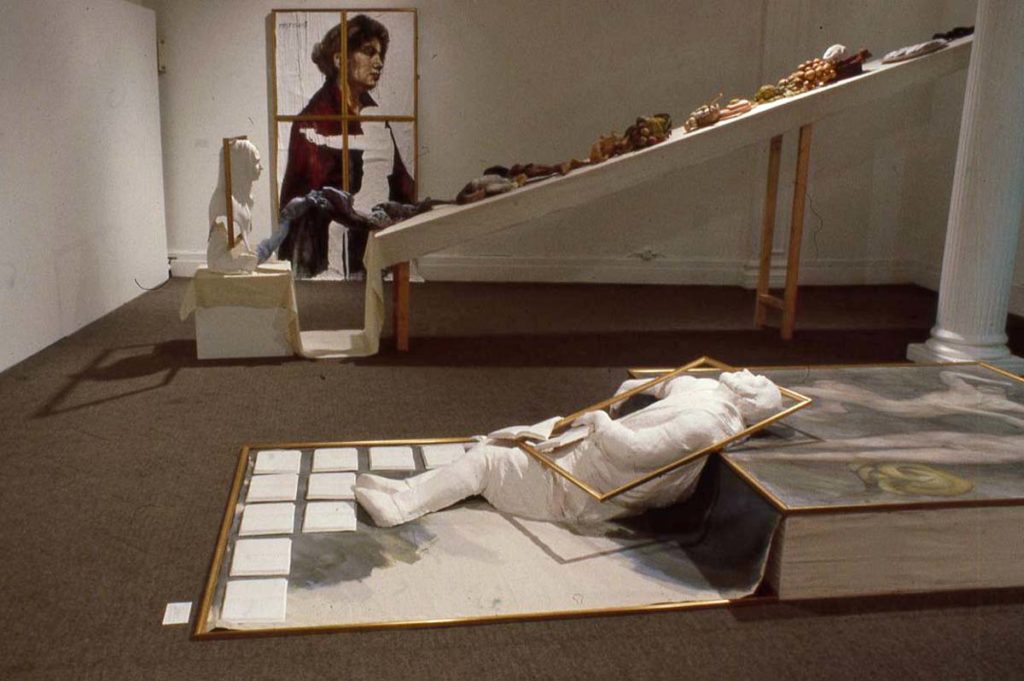 1984, Rose Garrard, Between Ourselves.

In 1984 Rose Garrard’s solo exhibition, Between Ourselves, a touring show from Ikon Gallery, Birmingham, occupied all the gallery spaces. This image shows her installation in the main gallery. 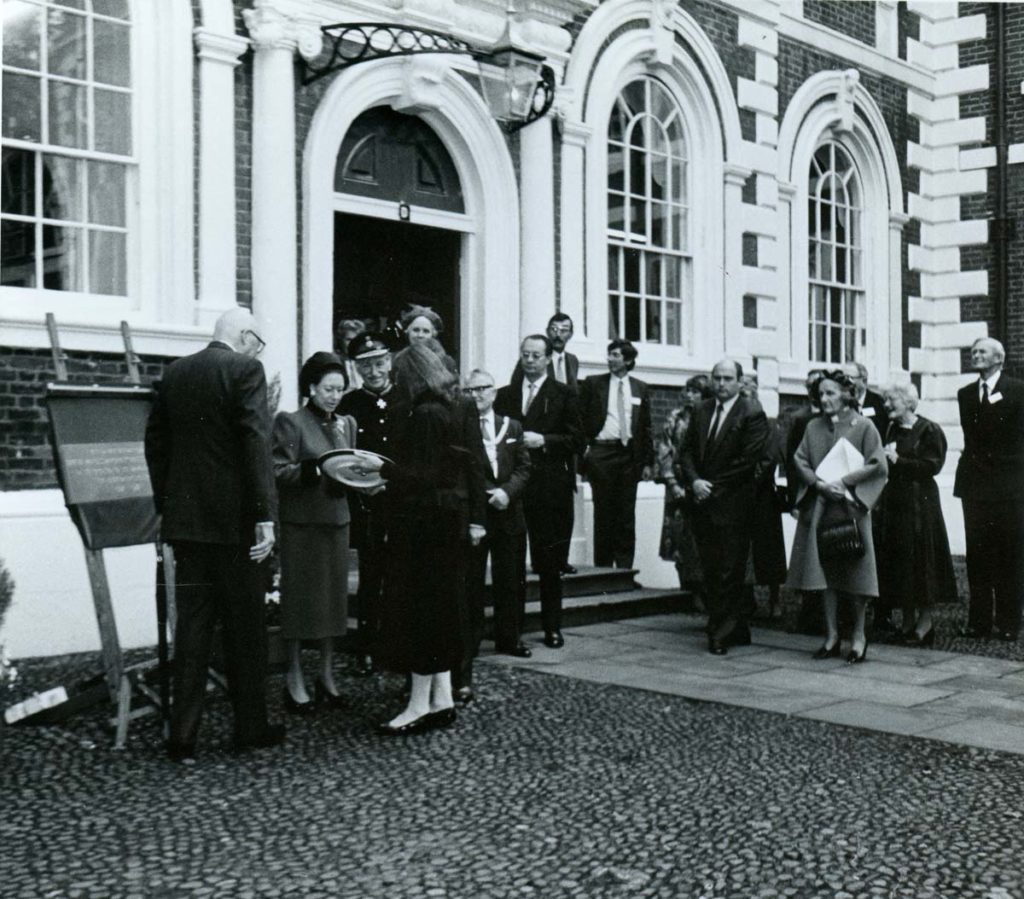 In 1987, on the 60th anniversary of Bluecoat Society of Arts, Princess Margaret visited the building. 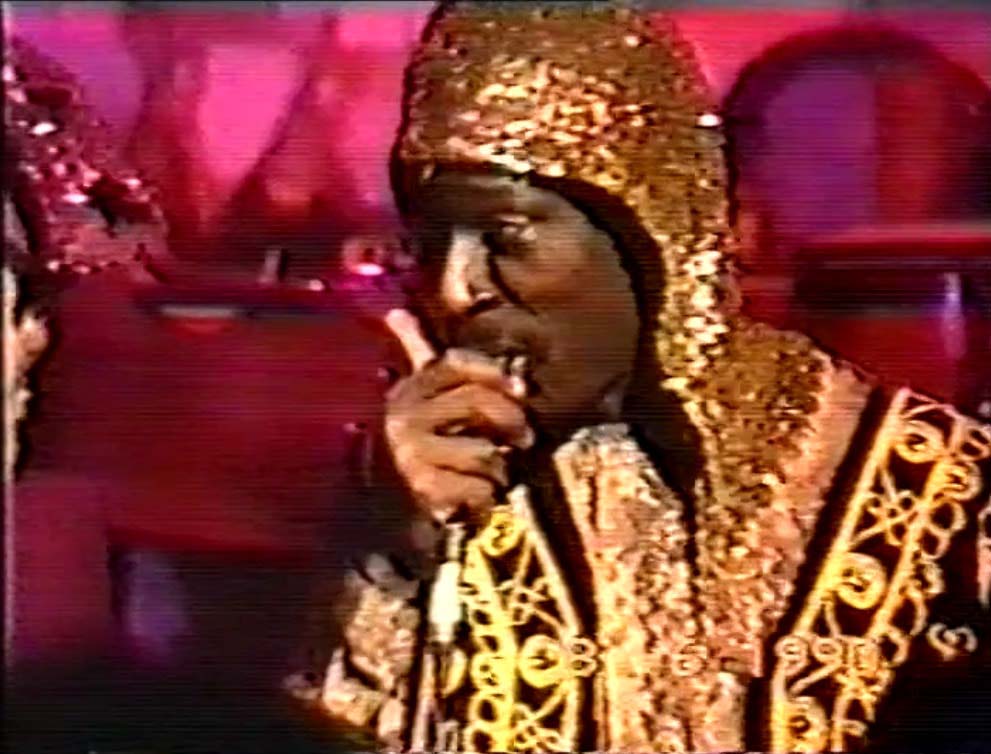 Normal service was soon resumed and the Sun Ra Arkestra came to the venue for a night of cosmic free jazz in 1990. One of the later performances before Sun Ra took his last interstellar journey across the spaceways, the memorable night apparently resembled a rave, as the packed crowd on the Concert Hall’s seating unit responded to the American jazz legend. The gig was captured on video, which turned up in the US, finding its way back to Liverpool the next century. 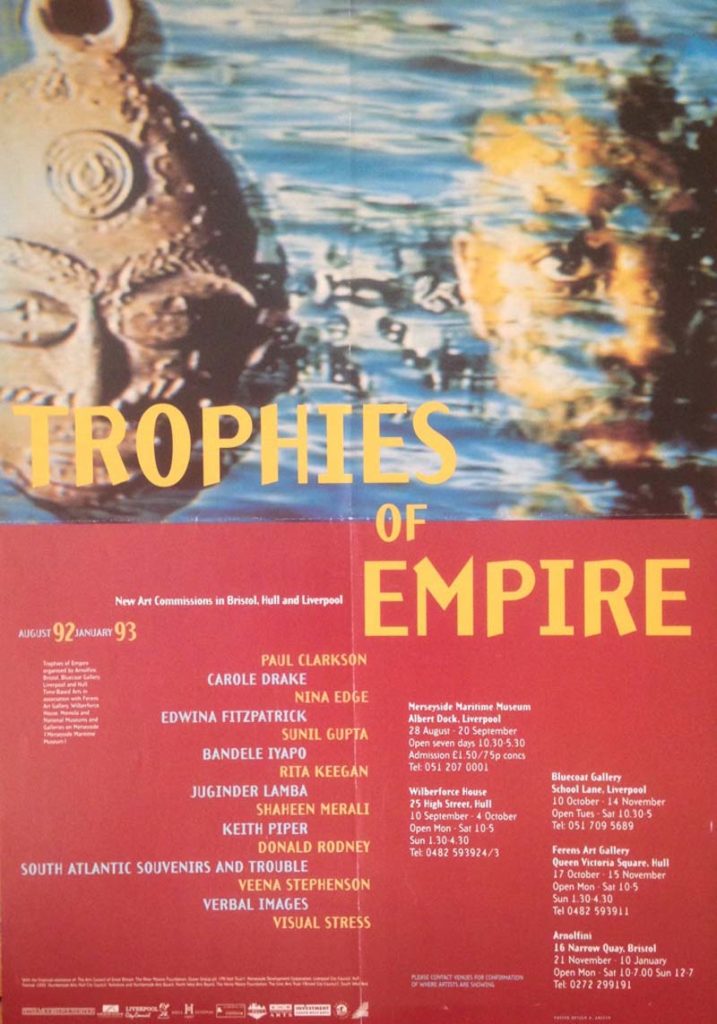 Initiated by Keith Piper and Bluecoat (working with Arnolfini in Bristol and Hull Time Based Arts), Trophies of Empire was an artists’ commission series made in response to the Columbus Quincentenary (500 years since his so-called discovery of the Americas). They explored legacies of colonialism and imperialism and their imprint in three UK ports, Liverpool, Bristol and Hull. At Bluecoat, Paul Clarkson, Rita Keegan, Juginder Lamba, Shaheen Merali, South Atlantic Souvenirs & Trouble, Veena Stephenson, Verbal Images and Visual Stress comprised the exhibition and performance programme. Piper showed a video installation, Trade Winds, at Merseyside Maritime Museum, related to Liverpool’s significant role in Transatlantic slavery. 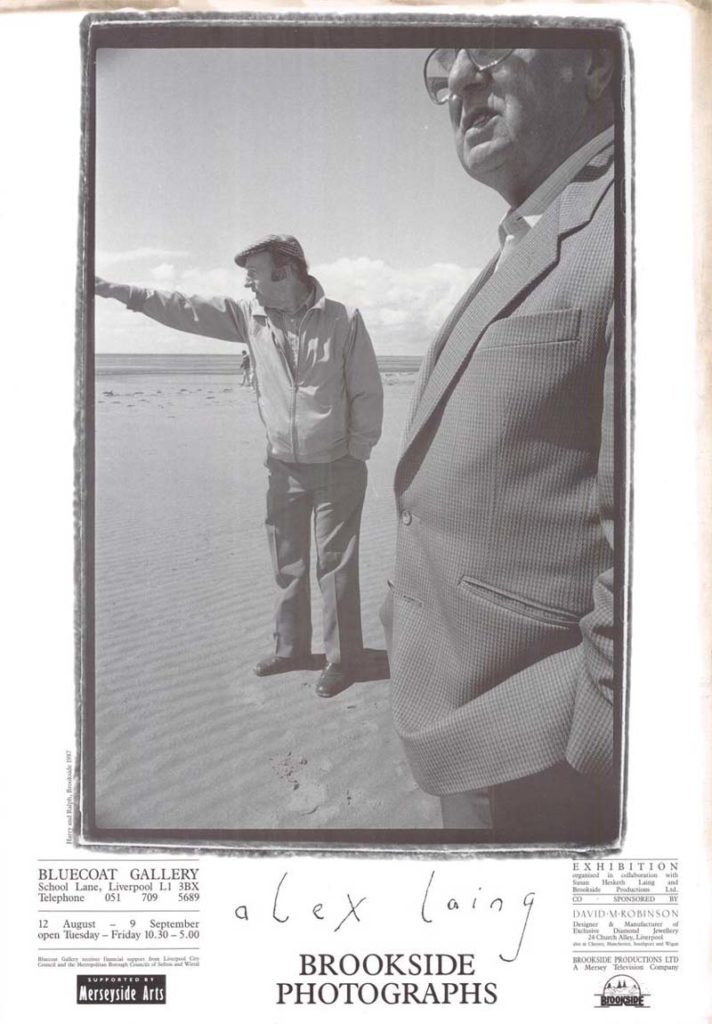 In 1998 a memorial exhibition celebrated the work of Liverpool photographer Alex Laing, who’d taken a series of images of the Liverpool TV soap Brookside, before he was killed in a road accident. 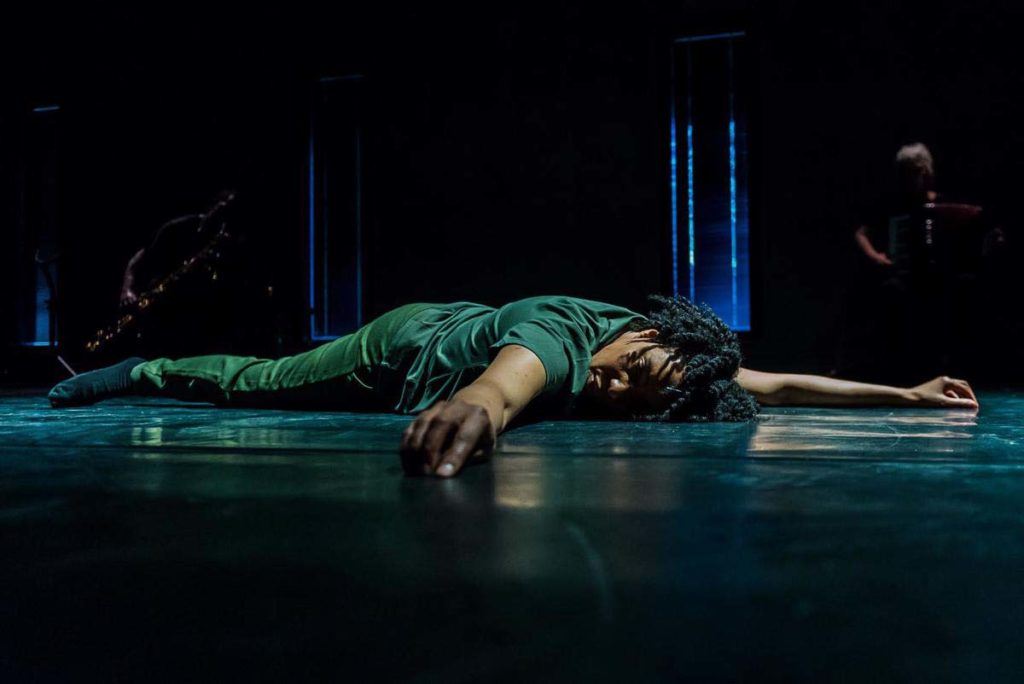 Curated by Rose Issa, Arabicity featured contemporary artists from the Arab world: Basel Abbas, Ruanne Abou-Rahme, Chant Avedissian, Fathi Hassan, Raeda Saadeh and Ayman Baalbaki, whose installation of a luggage-laden car revolved in gallery 3 of the new arts wing. The exhibition was part of Bluecoat’s contribution to the 2013 Liverpool Arabic Arts Festival which was established as a partnership of the arts centre and the Liverpool Yemeni Arabic Club.

Visitors to the My Bluecoat website can explore collections, watch videos, peruse archive photos, artworks and posters and even submit your own stories to the archive. To learn more visit mybluecoat.org.uk

Bluecoat is Liverpool’s centre for the contemporary arts, the oldest in the UK. Our landmark building, located in the heart of the city centre, is home to a year-round programme of exhibitions, music, dance, literature, live art and heritage events. Bluecoat also provides a base for around thirty artists, collectives,…