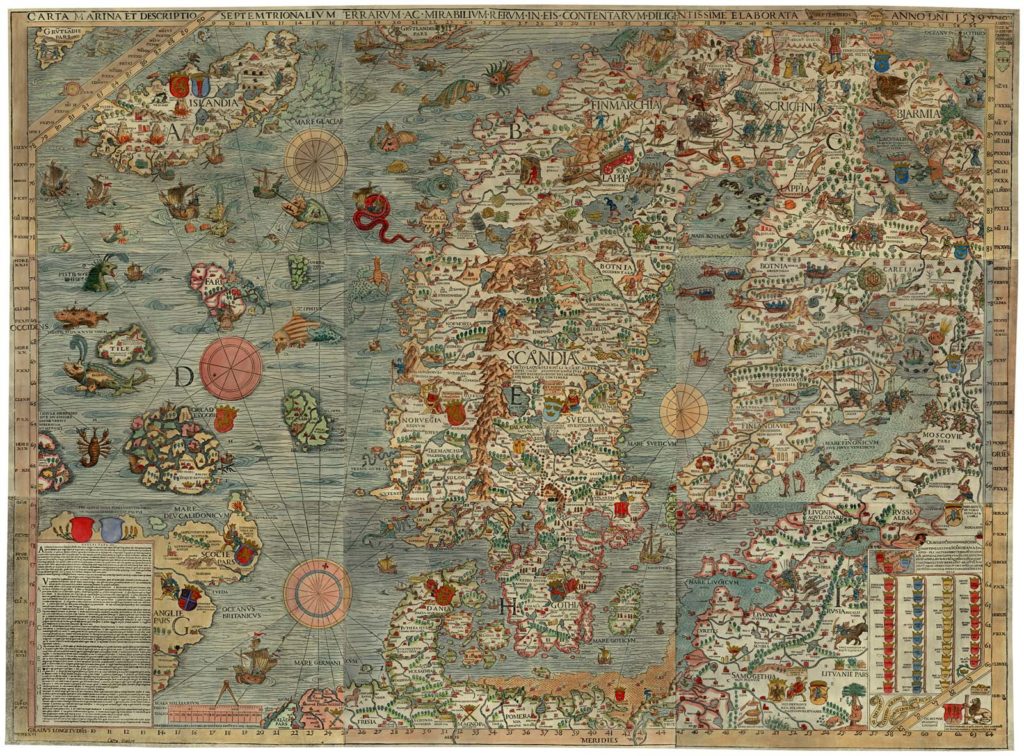 The Carta Marina by Olaus Magnus, 1539. Credit James Ford Bell Library at the University of Minnesota

As the National Maritime Museum Cornwall prepares to explore the Monsters of the Deep, we take a closer look at the medieval cartographical wonder, the Carta Marina

Despite the wonders of science, exploration and the TV documentary many of us still harbour a fear of the unknown creatures that lurk deep beneath the ocean.

Imagine, then, how sailors, explorers and ordinary folk must have viewed the oceans in medieval times?

To get an idea, take a look at the brilliant Carta Marina, a rare and almost mythological map that was produced in the 1530s by the cleric-cartographer Olaus Magnus, to chart Scandinavia and the seas around it.

A sumptuous lightbox version of this medieval treasure trove of monsters and landshapes introduces the National Maritime Museum Cornwall’s summer exhibition, Monsters of the Deep: Fact and Fiction, to offer an entree into their deep exploration of our enduring fascination with the creatures that live in the depths of the sea.

The exhibition, which was originally due to open in March, explores incredible stories, beliefs and mythologies around deep-sea monsters and travels from medieval folklore to modern science, via spectacular specimens, cryptozoology and the world of monster-hunters during the 20th century.

And it’s the Carta Marina that introduces visitors to this endlessly fascinating world.

One of the most accurate cartographical productions of its age, the map was drafted in Rome in 1539 and contains detail and a level of skill lacking in many other early maps of the region. But it’s what’s going on in the seas that draws the eye.

“The map is our way into thinking about sea monsters and the persistent belief in sea monsters in different societies and ages.” says NMMC curator Stuart Slade, who worked for over two years to develop the exhibition. “If you talk to anyone about deep sea discovery, they all say that 95% of the ocean is un-explored – then there’s a hop skip and jump and they say ‘therefore it stands to reason there must be something out there’… 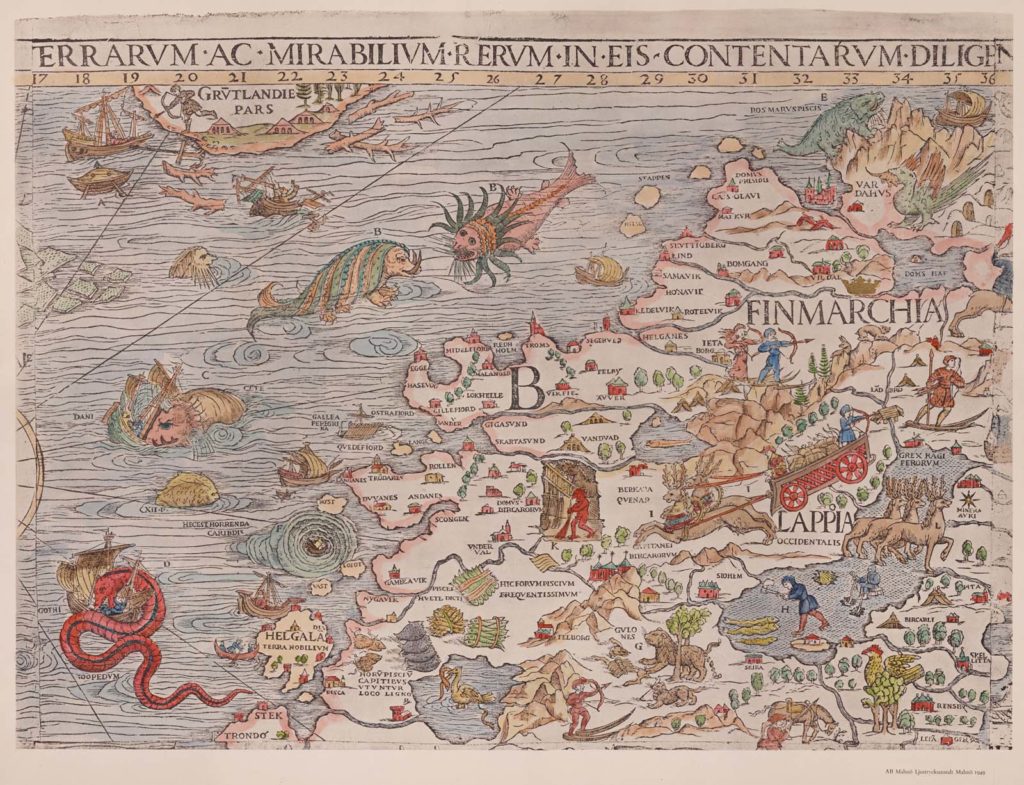 “So there’s still a very keen interest in the modern world about the unknown. If that’s happening today then it’s a powerful connection to how human beings respond down the ages to the vast unknown, which is the ocean.”

It’s this human urge to fill in the voids and gaps of the unknown that can tell us more about ourselves than a straightforward history of exploration could ever do.

“That is what the Carta Marina does,” adds Slade, “it populates the known and the unknown with this incredible mix of scientifically and objectively observed material, myth, knowledge and politics. It is a fantastic mirror into the medieval mind.”

Olaus Magnus was a catholic priest and traveller and some of his illustrations are based on his own observations. They also draw on previous bestiaries and the exhibition features a version of the Hortus Sanitatis, the world’s first natural history encyclopedia. Printed in 1491, it represented a significant moment in the birth of scientific history, and a time when unicorns and mermaids were considered alongside elephants and giraffes as marvellous wonders of the world.

Similarly, the Carta Marina features fantastical sea serpents next to some relatively naturalistic representations of things like whaling in the Faroe Islands.

“It sets that tension between a magical and mythical response to the world and the beginnings of a more scientific response, and that tension in that map sets up the whole exhibition,” says Slade. “How can it be that in the middle of the twentieth century, you’ve got zoologists going out trying to discover monsters in the ocean?” 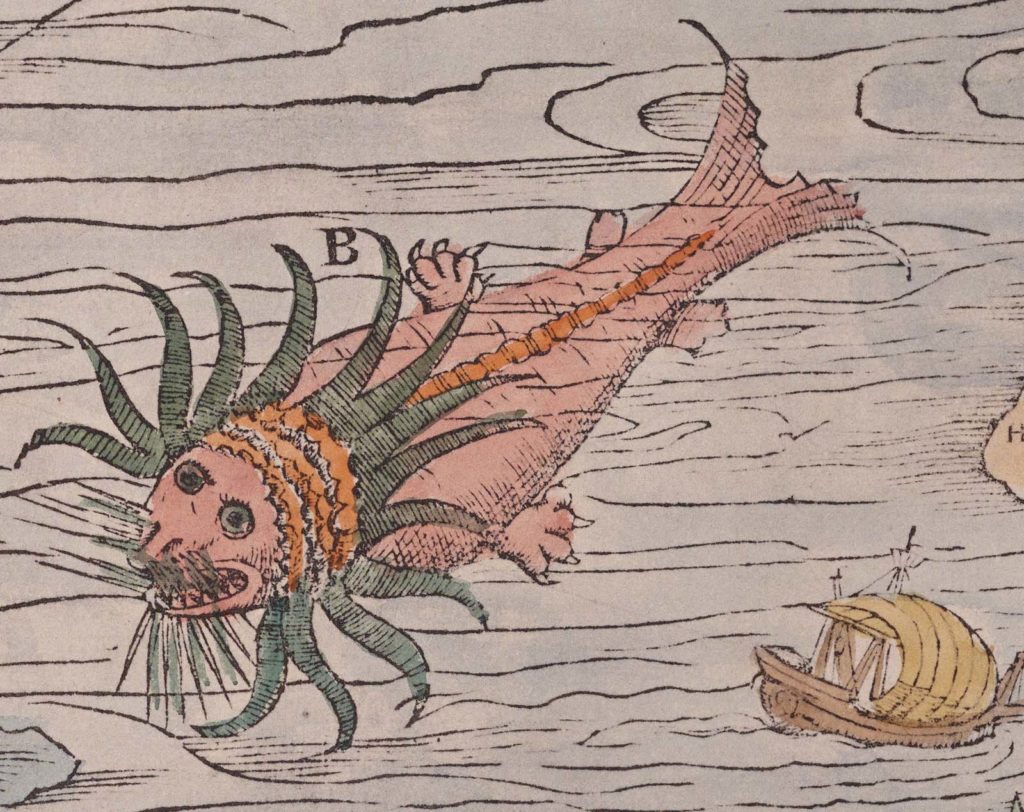 Making parallels between religious thought and superstition in the medieval period with the pseudo-science, fake news and conspiracy theories that we have today offers an opportunity, says Slade, to ponder “how science and scientific responses to the world are constantly surrounded by a very different set of psychologies and responses”.

“In the map you have different strands – some prosaic stuff going on,” he adds. “The more detailed the map, the more expensive it was so some of these decorations are just copied from earlier designs to fill in blank spaces and make it pretty and a sign of wealth.

“Perhaps some of the monsters have been placed in certain places because certain kingdoms don’t want other kingdoms fishing? There’s the eddying around Iceland, which might be geophysically accurate and based on the effects of warm water meeting cold water.

“Then you have these mirror creatures – the ancient belief in a kind of natural symmetry in God’s world where if you have cows, goats and horses on the land then you must have sea cows and sea goats and sea horses as well as the unicorns and serpents. It is an incredibly rich way of seeing, recording and filling in what we don’t know. What’s fantastic about the map is the way it’s all there in a very visual way.”

The map is also a wonderful manifestation of the mariner’s tall tale, with whales and other creatures attacking ships, lobsters carrying off sailors and islands morphing into leviathans. Magnus was obviously enjoying the company of sailors and fishermen and getting some of his information from them. 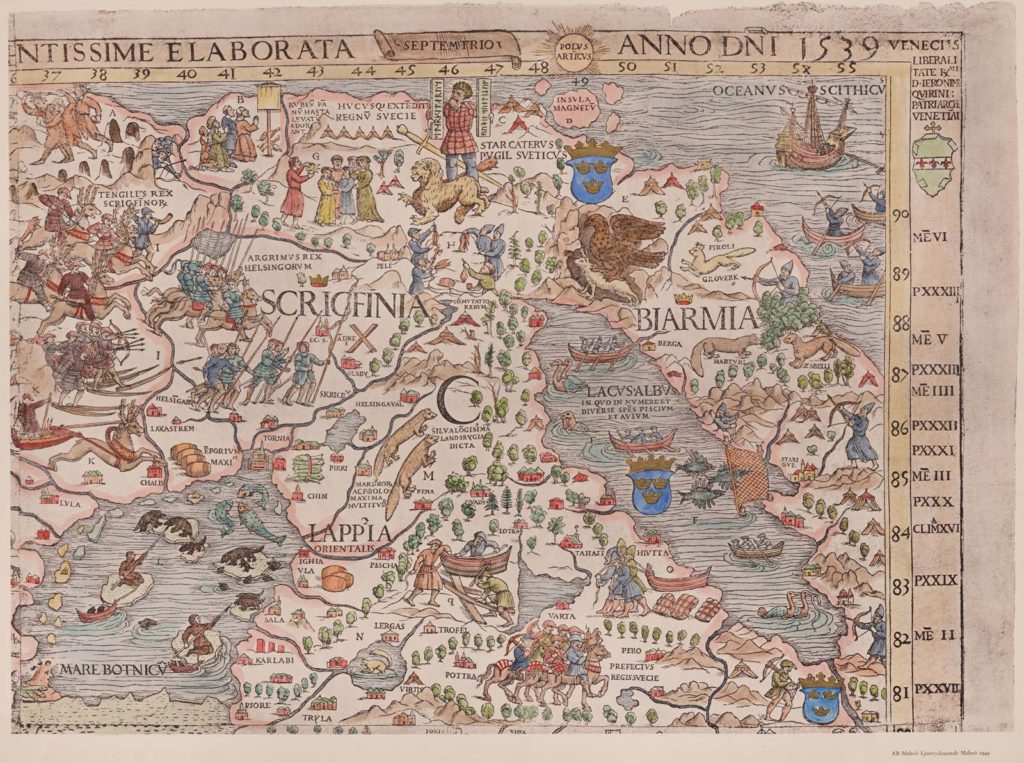 “I don’t want people to look down at superstitious medieval people for being ignorant and believing in monsters,” adds Slade of the imagery in the Carta Marina, “because it still happens now.”

“We’ve hung a complete killer whale skeleton over the map, which we’re very lucky to get from the Booth Museum in Brighton, and when you look at the jaws and the skull and imagine that washing up on a beach in medieval times, why on earth would you not believe in dragons and monsters of the sea?

“That sets up what happens later in the exhibition, which explores unknown sightings and mysterious creatures. If you go to YouTube and search for sea creatures, within three clicks you’re onto some weird conspiracy theory and grainy photos with a red circle saying ‘what is this’? So even today things washed up on the beach spark all kinds of theories.”

The exhibition has been created in collaboration with a variety of specialists and guest curators, including Viktor Wynd, who has created the ‘UnNatural History Museum’, which brings together fascinating, and often disturbing specimens such as a giant rearing unicorn skeleton and a mummified feegee mermaid to explore ideas of what is real and what is fake.

Also explored is the impact of sea monsters in cinema and popular culture, as well as the wider history of deep-sea exploration, from early attempts through to the voyages of the HMS Challenger and state-of-the-art underwater scientific exploration. A section co-curated with the UK’s pioneering National Oceanography Centre mines the true depths of our oceans and the real-life sea monsters that lurk beneath.

After all that deep sea exploration, visitors will probably return to the Carta Marina to ponder how little has changed.

Monsters of the Deep: Science Fact and Fiction runs until January 2022. For entry details and openings follow the link below.

The multi-award winning National Maritime Museum Cornwall has 15 galleries, over five floors beautifully illustrating the past, present and future of this island nation. Silver winner of UK Heritage Attraction of the Year at the 2014 British Travel Awards, and the 2014 Telegraph Family Friendly Museum award, the museum features…