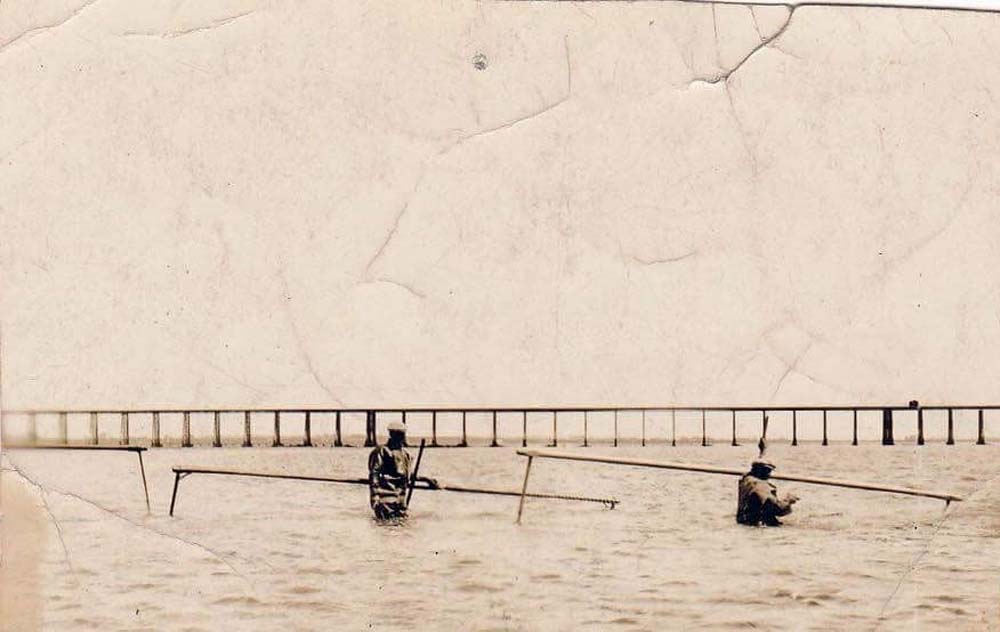 Haaf netters in the shadow of the viaduct c. early twentieth century. Image Courtesy of annanhaafnets.org

It is thought the Vikings first figured out how best to catch fish in the Solway Firth – by wading into the fast flowing river with a net fixed to a pole measuring 4.8m in length, which according to folklore is the length of Viking longboat’s oar.

Haaf net fishing (Haaf being the Norse word for channel or sea) still takes place amidst the shifting tides and sands of the river that runs into the Irish Sea and divides the Western borderlands of Scotland from England.

The Solway Firth has some of the most dramatic tide shifts in Britain, regularly rising and falling up to seven metres, yet for over a thousand years this seemingly hazardous method of catching fish is still in use, albeit by a dwindling band of hardy local fishermen who wait in the cold water for passing salmon or sea trout to swim into their trap and be scooped into a sack.

“Sir Walter Scott’s The Red Gauntlet in 1842 is all about the Solway, “says Judith Hewitt, Manager of the Devil’s Porridge Museum in Eastriggs, which is hosting the exhibition about haaf netting. “In it he wrote: “He that dreams on the bed of the Solway may wake in the next world,” because of the danger; if you don’t pay attention you could die.

“They’re out there at all times of the day and in all weathers. If you have a tendency to drift off, then you pay for it.” 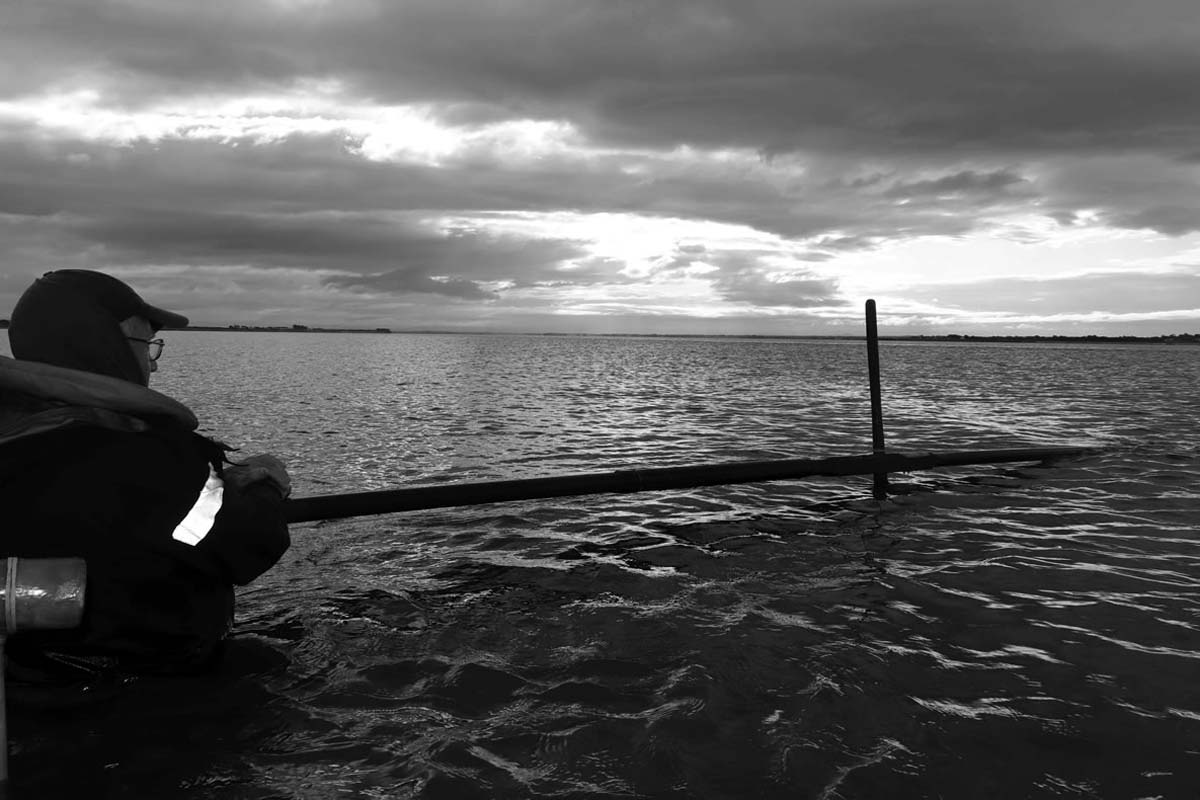 Haaf netters today ply their trade in the twilight. Image Courtesy of annanhaafnets.org 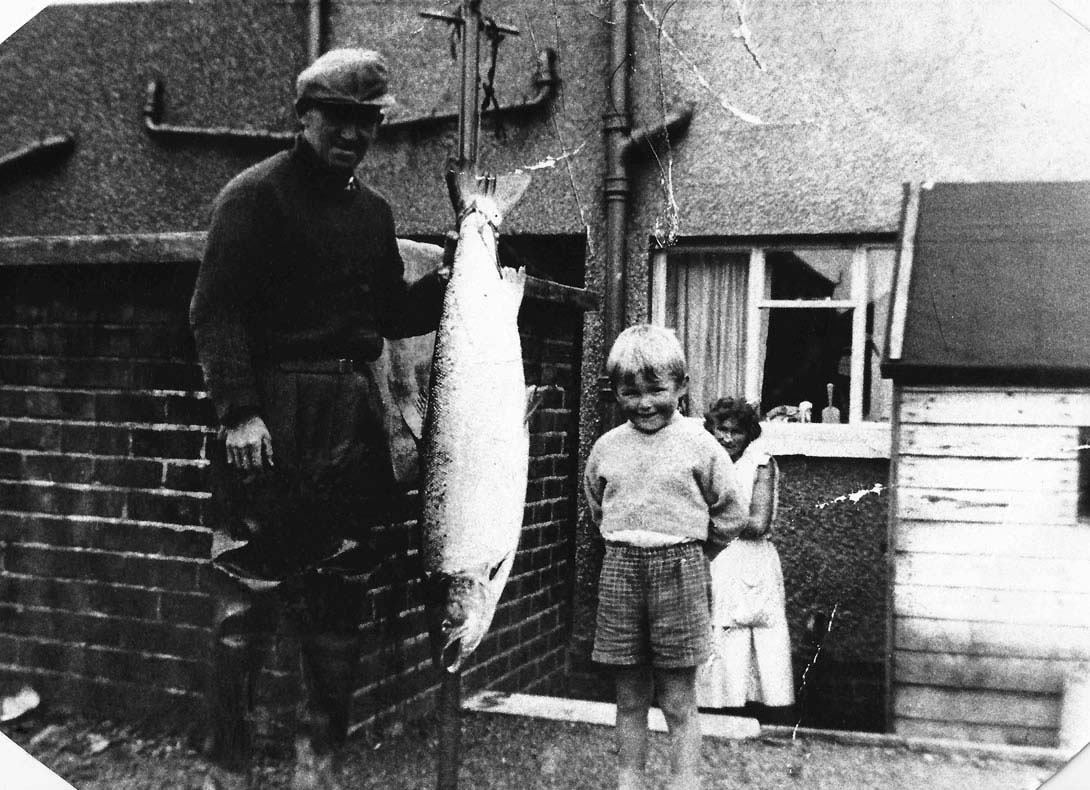 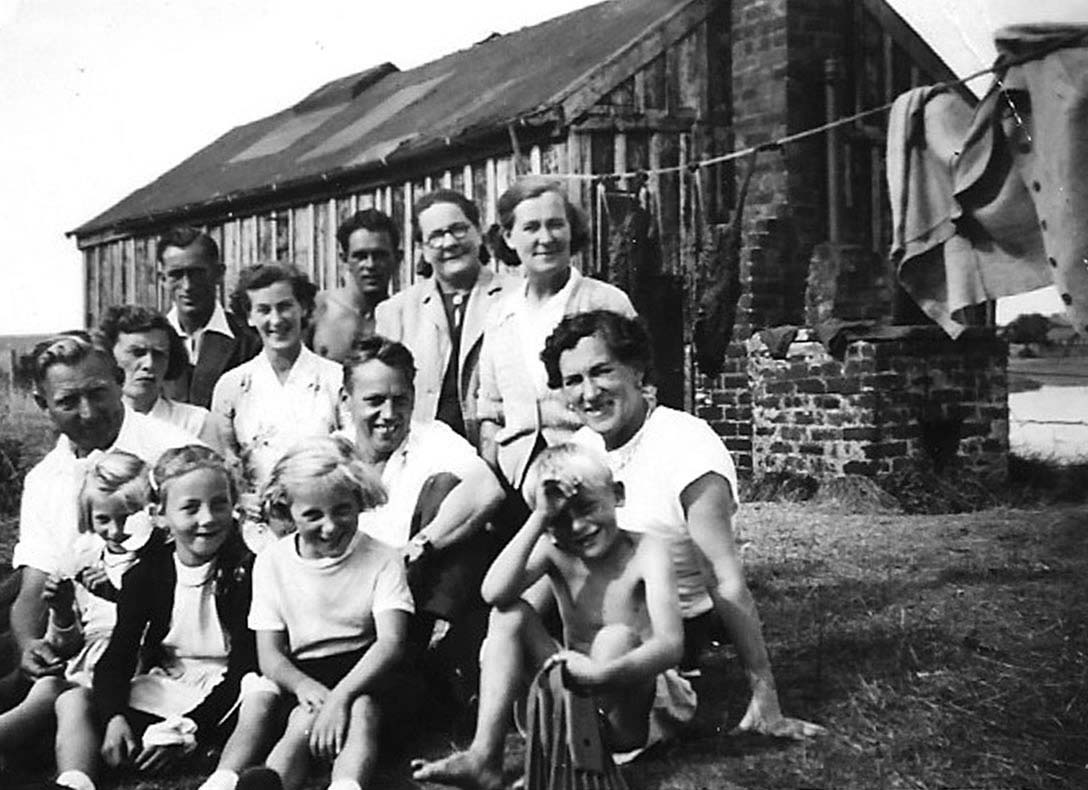 The perilous and sometimes demanding nature of haaf netting may be one factor in its demise but other more persuasive reasons, including the changing nature of modern commercial fishing and environmental issues, have also had an influence. The Scottish government introduced a number of conservation measures in 2016, including catch and release regulations for salmon caught in the Solway, and today the 30 or so local people who still use the technique are fighting to keep the centuries-old tradition alive.

Their story, and that of the wider history of haaf net fishing and the Solway, is told in the exhibition in the Devil’s Porridge Museum, whose story and collection relates to the local munitions factories and the local workers who produced the explosive, cordite (euphemistically known as the devil’s porridge), during two world wars. The museum overlooks the Solway Firth and this story adds to the strong local connection they have fostered with locals.

Developed by local haaf net organisation, AnnanHaafnets.org, the exhibition features selections from a vast collection of archive and contemporary photography, depicting haaf netting and the communities who supported it, together with oral histories and the stories of people past and present.

“Stories and accounts of nearly getting swept away”

“We have stories and accounts of nearly getting swept away by the tide and of people going out fishing in the middle of the night,” says Hewitt. “And then there’s the sounds and experiences they have; the phosphorescence that can appear in the Solway, which makes it look like the water is glowing. So there’s a lot to do with the natural world as well because in many ways it’s a beautiful, peaceful thing which people really enjoy doing.”

Among the archive imagery in the exhibition is an evocative early twentieth century photo of haaf netters plying their trade in the Solway beneath the shadow of the vast viaduct that once spanned the firth and connected England and Scotland.

The viaduct has now gone, damaged by cold weather and huge of blocks ice before it was demolished in the late 1930s, although you can still see parts of it today at low tide.

“There’s a place in Annan called ‘Back of the Hill’”, adds Hewitt, “and then on the other side of the viaduct was ‘Watch Hill’. Those were the two main fishing rivalries and the viaduct used to be the the boundary between them, but now it’s gone and it’s not as important to their livelihood, they tend to all be quite pally now.

“The viaduct was actually utilised by the factory that the Devil’s Porridge Museum focuses on,” she adds. “It was one of the reasons the factory was based here because they used to bring workers over from Carlisle comparatively easily.” 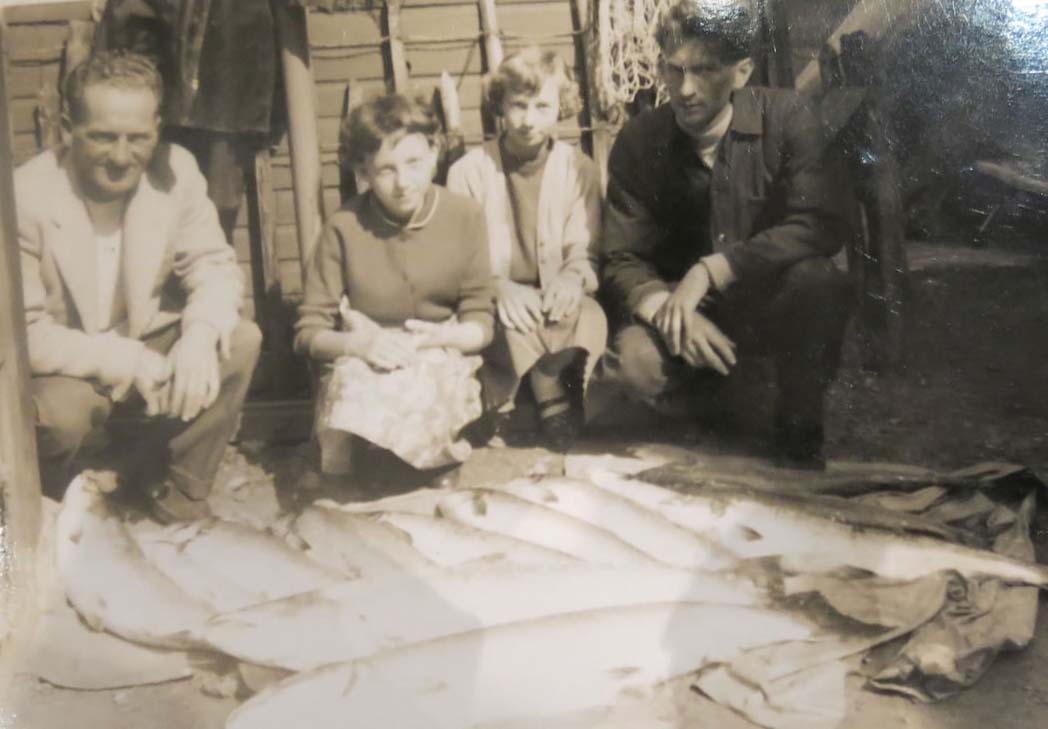 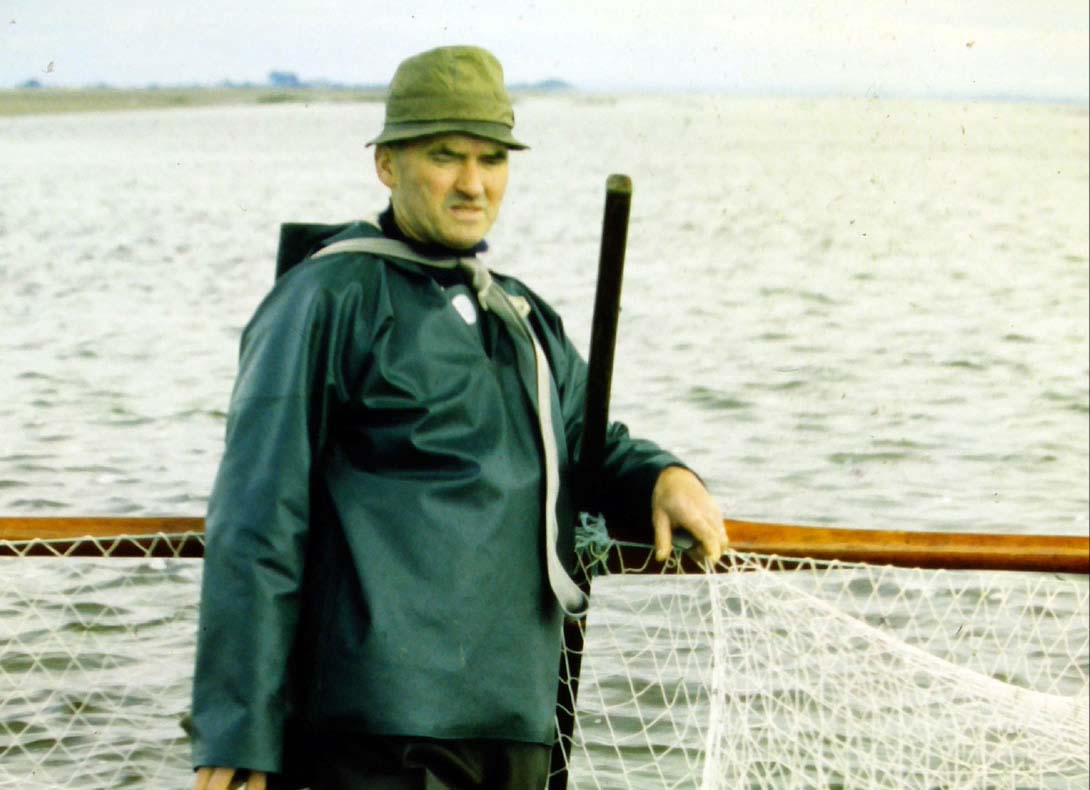 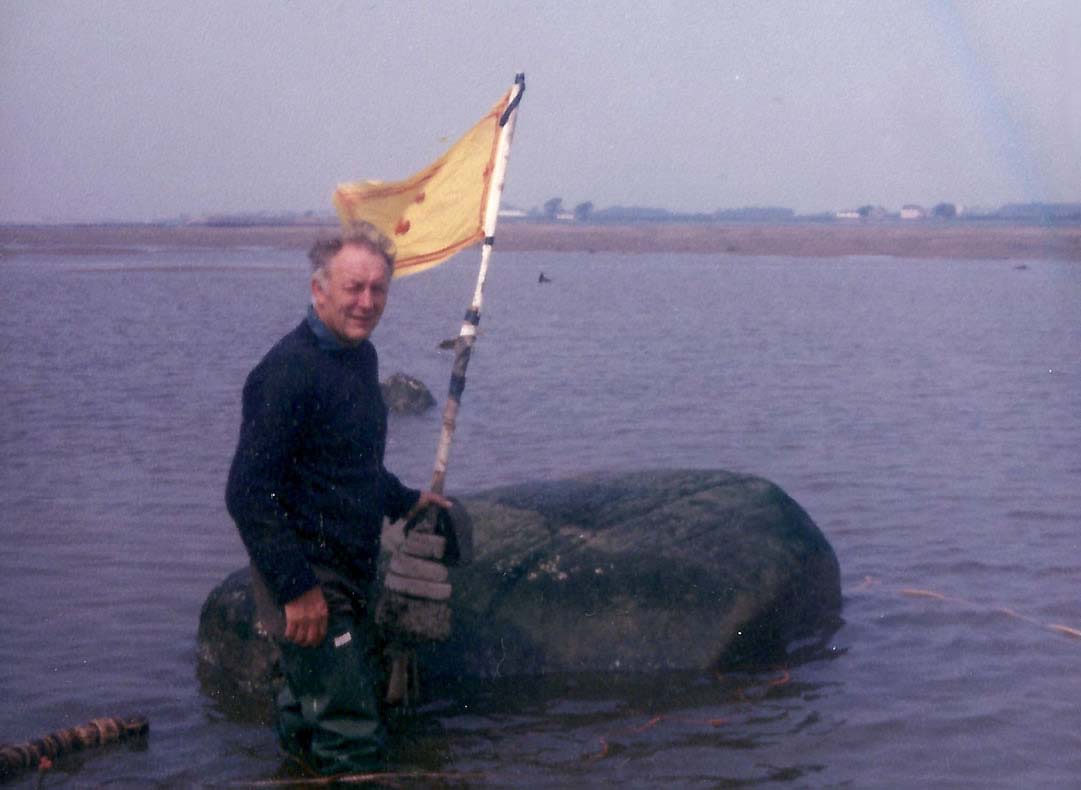 Laying claim to the Altar Stone. Image Courtesy of annanhaafnets.org

Low tide on the Solway occasionally reveals another relic from history, the Altar Stone, a boulder on the sands that has been regarded as a boundary marker since medieval times. The stone marks the parish and burgh boundary as well as defining fishing rights and the borders of England and Scotland. It is just one of the many local histories and folklore that surround the river and haaf netting.

“When the fishermen in the past wanted to decide who was going to fish where to make the most of the tide, they had this method called ‘casting the mells’” says Hewitt. “They threw sticks on the ground and by the ritual removal of them they decided who got to pick the best spot or the place with the best yield.”

This tradition is still used by the fishermen when haaf netting, which today has become a hobby or perhaps even a living heritage practice more than a job.

“It used to be how some people made a living and they sustained themselves from it,” adds Hewitt. “It was a big thing for the town of Annan, which is only about five miles from where we are in Eastriggs.

“Acts passed by James VI of Scotland in 1600 set the salmon fishing quotas in the Solway and the Charter of Annan in 1612 added more details, such as the selling of fish on Tuesdays and Fridays with some of the money going to the Annan Come to Good Fund, which helped the poor of the town.”

Like haaf net fishing the fund still exists today, and it is one of the supporters of the exhibition and of the ongoing battle to preserve the traditions, beauty and history of the Solway.

“But beautiful as it looks,” adds Hewitt, “the Solway Firth is dangerous and of course dangerous historically in terms of battles and conflicts. There was a battle at the nearest village to Eastriggs at Dornock, and there was a battle here in the Viking period that’s supposed to have led to the river running red for three days.

“There’s a local well called Sword Well where all the soldiers are supposed to have washed their bloody swords. And there’s the Battle of Solway Moss which was around about 1540. If you go from Gretna, which is obviously not far from here, there’s an area of land called the Debatable Land, which is passed backwards and forwards between England and Scotland. This whole area is steeped in that kind of history.” 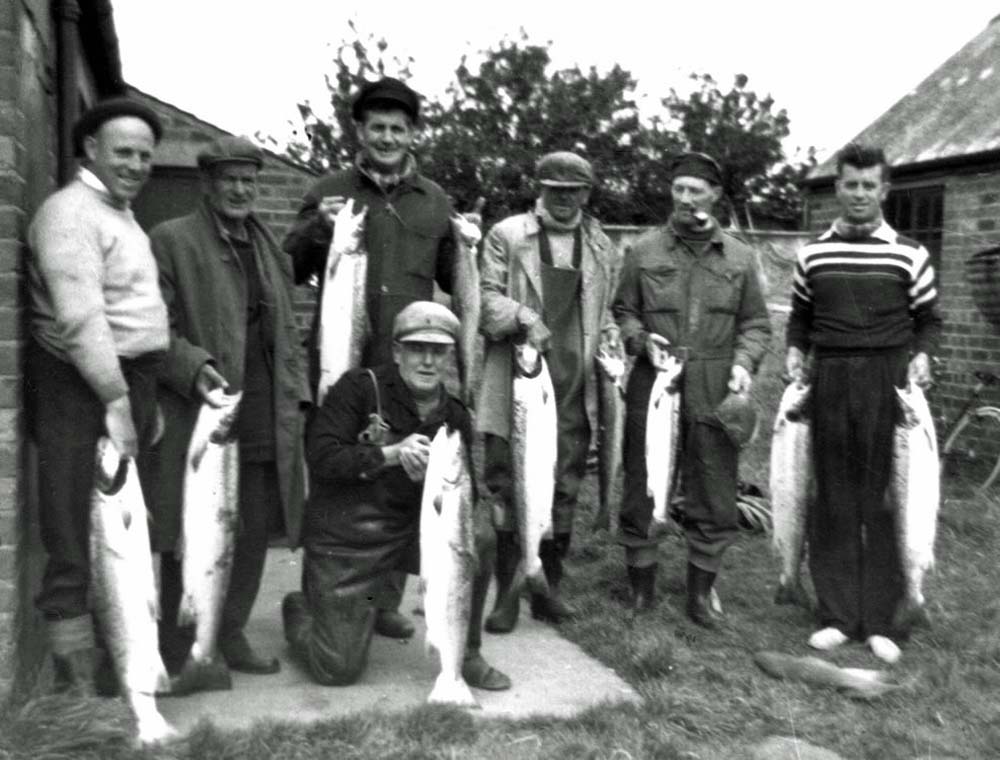 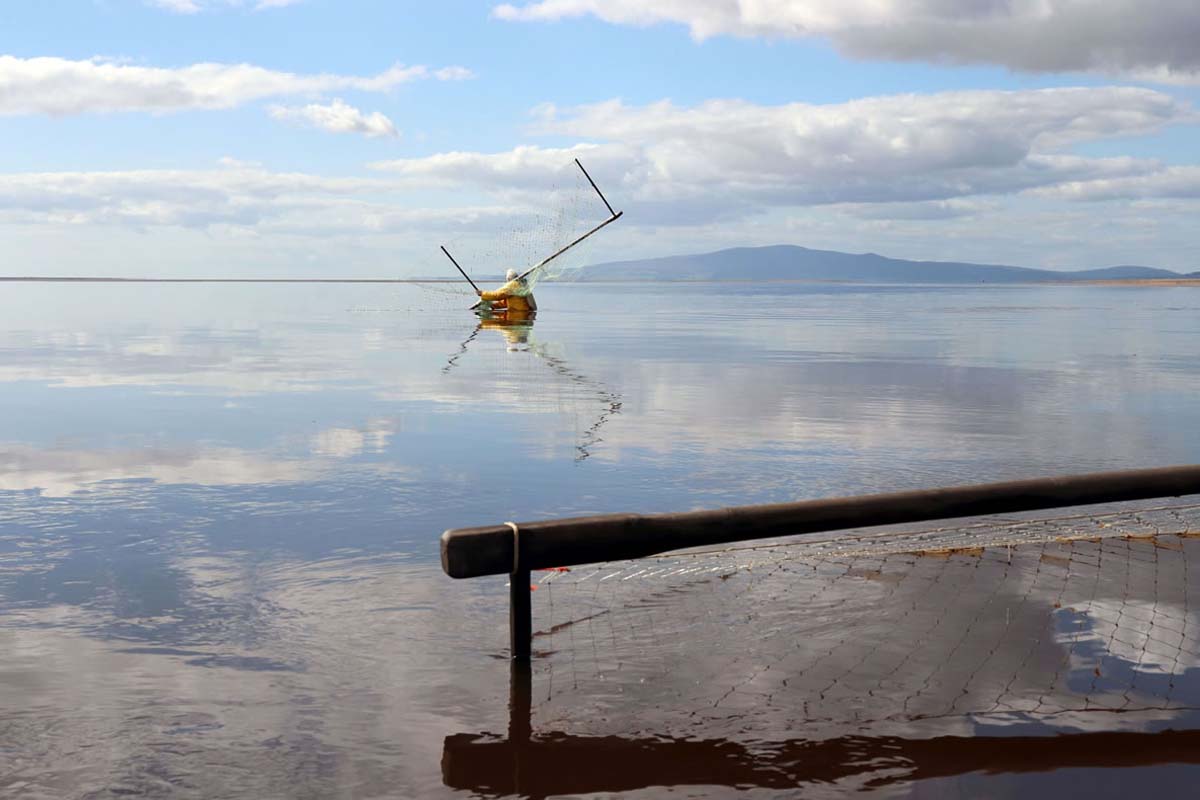 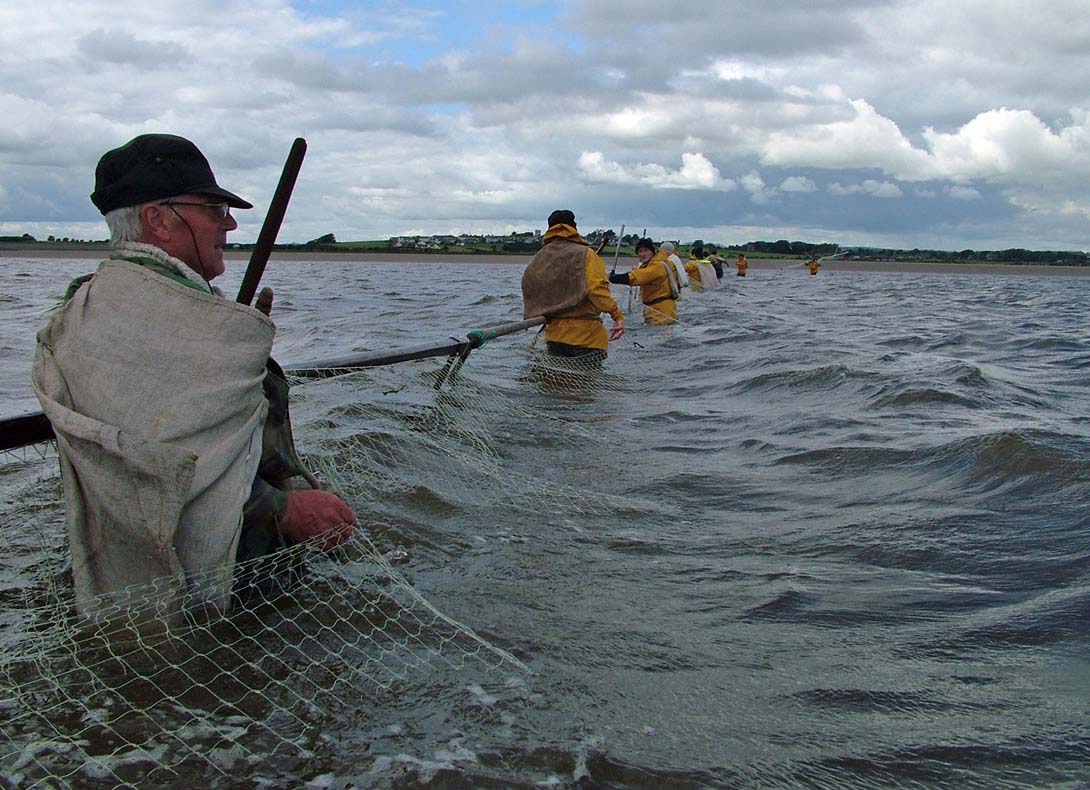 These contested histories may have lessened a little since days of yore, but parts of the Solway Firth remain Scottish, and parts of it English; it depends to some degree on the shifting sands and the tides.

“There’s also an account around here of the English coming over and stealing one of the church bells from Dornock and then it sinking in the middle of the river,” says Hewitt. “According to legend you can still hear the bell ringing at certain times of the year. There’s still an old rivalry between the two countries and a lot of rivalry between the fishermen across the Solway, as well as from the two different parts of Annan.”

Myth, folklore and fishing with the Vikings… A unique piece of local history is just about still alive on the borders.

The exhibition is open daily until the end of March 2020.