Drawing on a world-renowned collection of more than 1.5 million maps, the Bodleian Libraries in Oxford’s exhibition Talking Maps focuses on the powerful, and sometimes surprising, stories that maps can tell.

Exploring how maps are neither transparent objects of scientific communication, nor ideological tools, but rather “proposals about the world that help people to understand who they are by describing where they are,” the exhibition celebrates maps from a multitude of angles.

“Every map tells a story,” says co-curator Jerry Brotton, Professor of Renaissance Studies at Queen Mary University of London and author of A History of the World in Twelve Maps. “The exhibition shows how maps are creative objects that establish conversations between the people who made them and the individuals and communities that use them.” 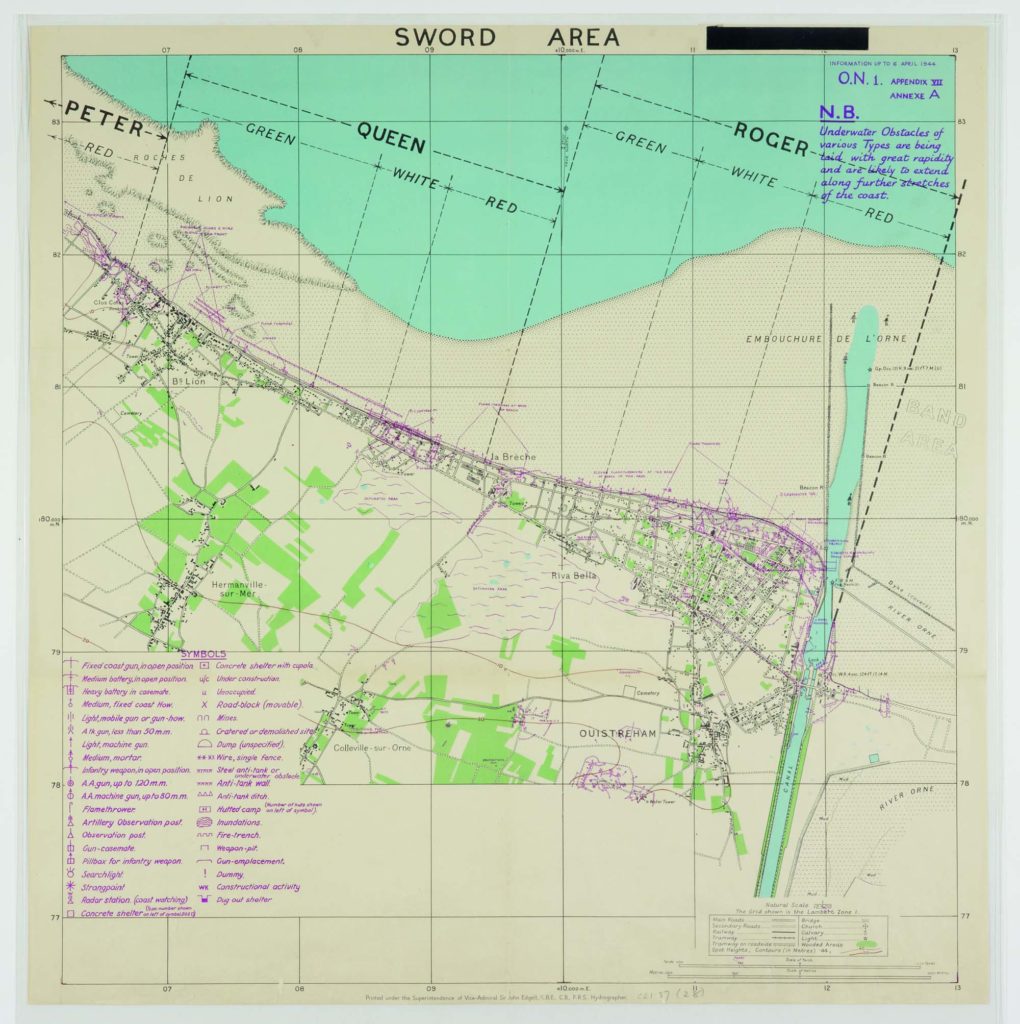 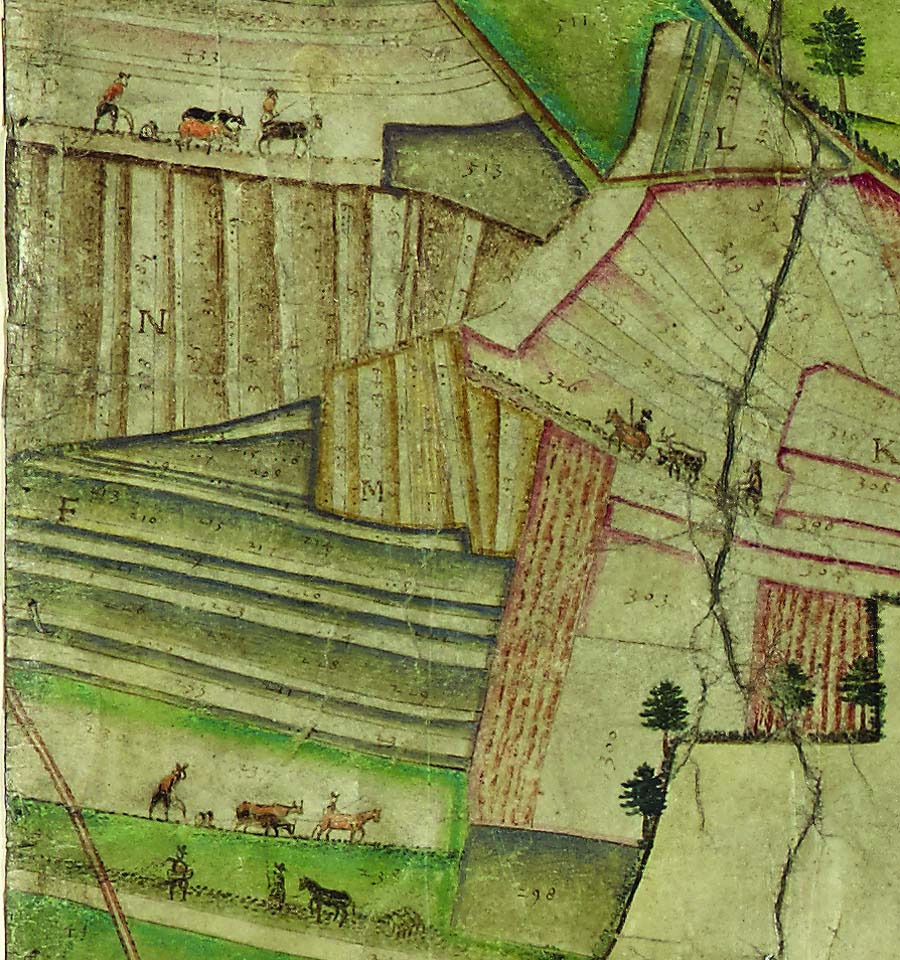 A detail of the Laxton map. 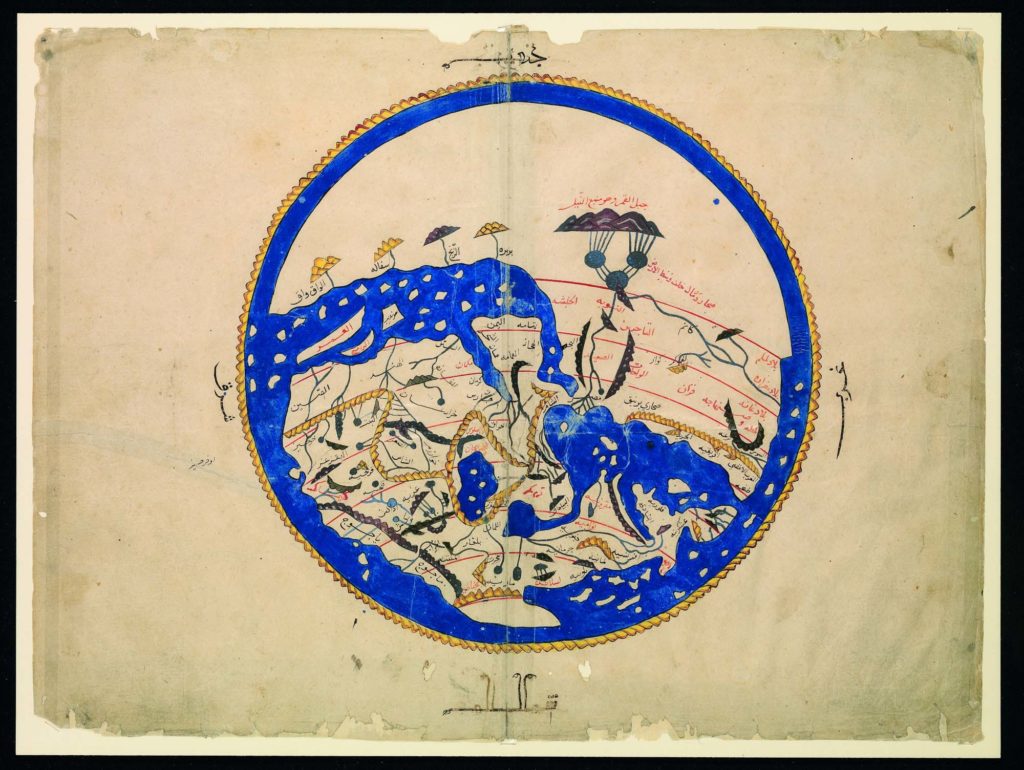 The Gough Map (late 14th-century), is the earliest surviving map showing Great Britain in a recognizable form whereas the Selden Map, a late Ming Dynasty map showing shipping routes across the South China Sea, is thought to be one of the first Chinese-made maps to come to England. Its significance was only rediscovered by an academic at the Bodleian in 2008.

Islamic maps such as Muslim scholar Muhammad al-Idrisi’s world map, is a famous twelfth century masterpiece regarded as one of the greatest works of medieval map-making that drew on the great traditions of Islamic cosmology, geography, trade and exploration. A new, specially-commissioned 3D installation created by Factum Arte, recreates another famous but now lost world map by the 12th-century geographer.

Other notable works include detailed maps used during World War Two, including one used for the D-Day landings which marks the German fortifications and other features in the network of seemingly impassable obstacles that Allied soldiers faced on June 6 1944. Historic maps of Oxford include a pictorial birds-eye view of the city from 1675, a 19th-century ‘drink map’ and never-before-displayed maps of Thomas Sharp’s post-war plan to redesign Oxford.

A vast map of Laxton in Nottinghamshire reveals the last remaining feudal village in England complete with open strip fields. The village remains largely unchanged four centuries on from the map’s creation in 1635. 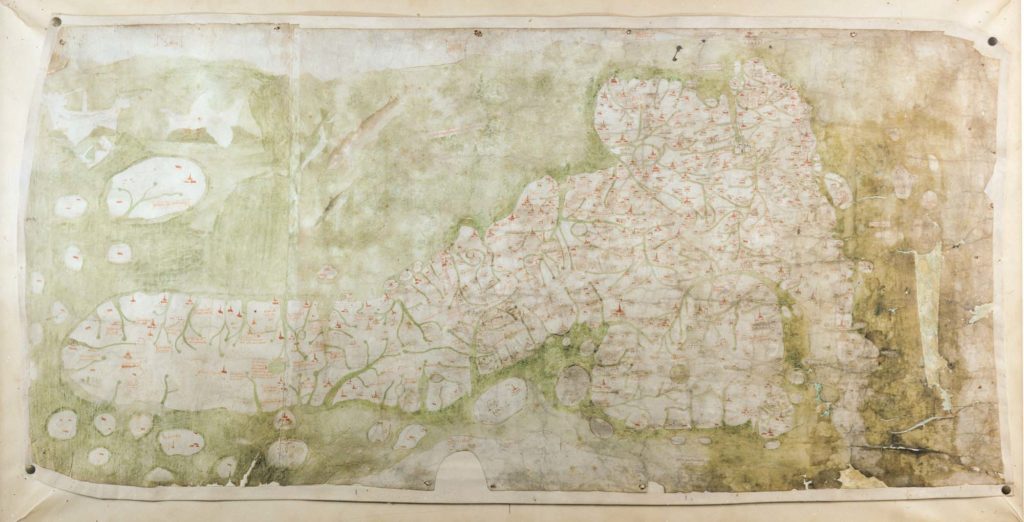 The Gough Map. The earliest map of Britain. © Bodleian Libraries, University of Oxford

A photomontage map of Newcastle Gateshead by the acclaimed artist Layla Curtis, whose work often explores cartographic elements, accompanies a surviving fragment of the Sheldon tapestry map of Gloucestershire, one of a set of four 16th-century tapestry maps of English counties commissioned in the late 1580s by landowner Ralph Sheldon (1537–1613).
“Maps do so much more than simply getting us from A to B,” adds co-curator Nick Millea, Map Librarian at the Bodleian Libraries. “Talking Maps highlights the diverse and surprising role of maps through the ages, from guides to the afterlife and windows into alternative worlds to tools that have been used to manage land, nations and empires.”

Visitors will discover how cities are administered using maps, and how they can also be used to deceive their attackers; how maps are used in war and drawing national boundaries; and how artists can use them to reflect on the state of our nation in light of Brexit.

Others provide routes to religious salvation – a beautiful Tibetan thangka suggests the path to personal enlightenment – while online interactive maps show us the global and environmental challenges we face in the 21st-century.

Then there is the form of the map with an extraordinary selection of ancient, pre-modern and contemporary maps drawn from a range of cultures in a variety of formats. Works are made of animal skin, woven in wool or made from leaves of coconut trees. The exhibition also shows how maps have migrated from paper to pixel in recent years. 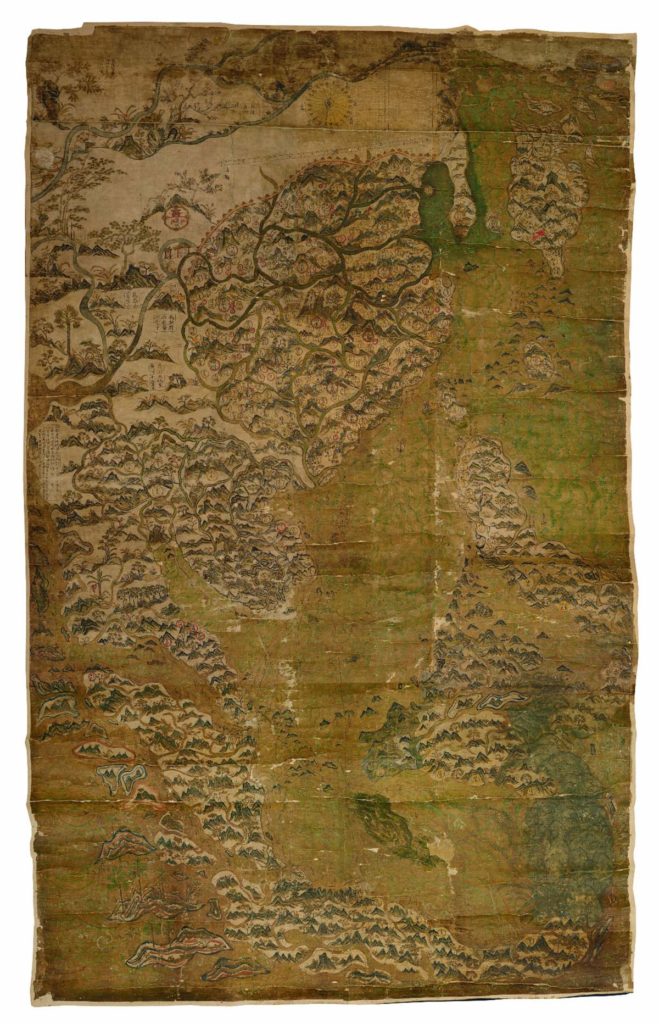 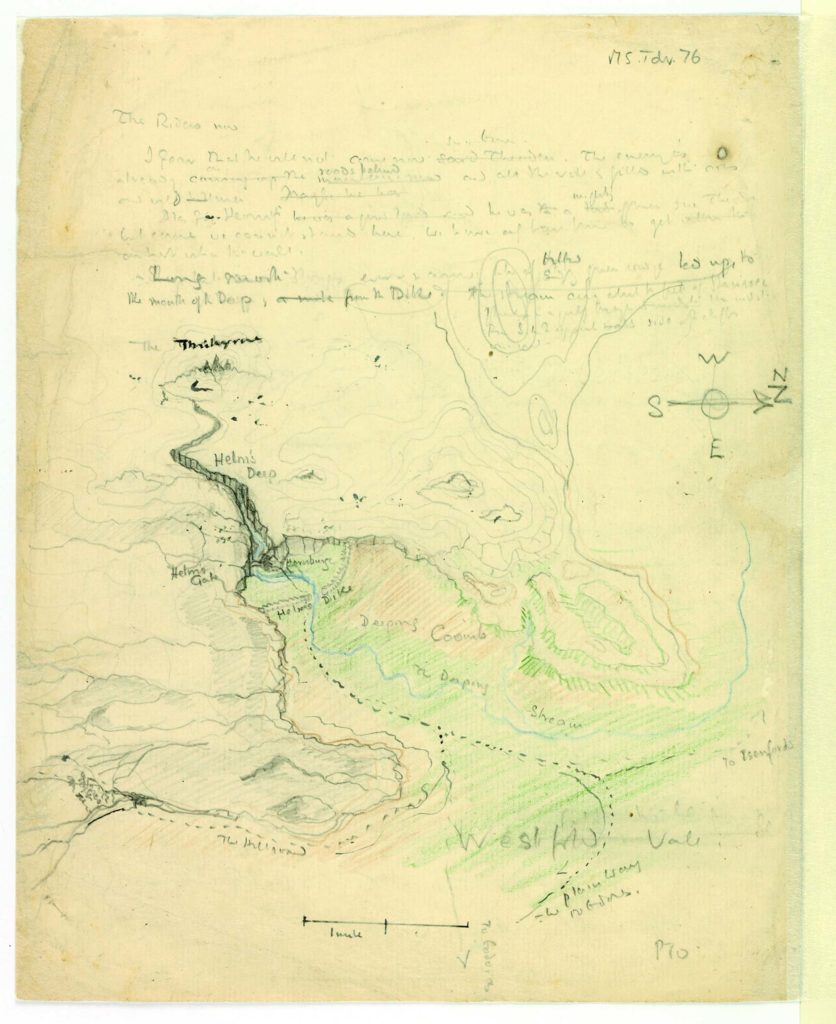 The latest digital developments in cartography can be seen via screens in the gallery that let visitors explore thought-provoking ‘cartograms’ – interactive maps that use statistics and big data to tell powerful stories about our changing world.

The unparalleled historical richness and cultural diversity of the Bodleian’s map collection make it one of the greatest cartographic collections in the world. Talking Maps invites visitors to come and enjoy the fascinating tales that the collection has to tell and to see some stunning maps on loan from 21st century artists and map-makers. 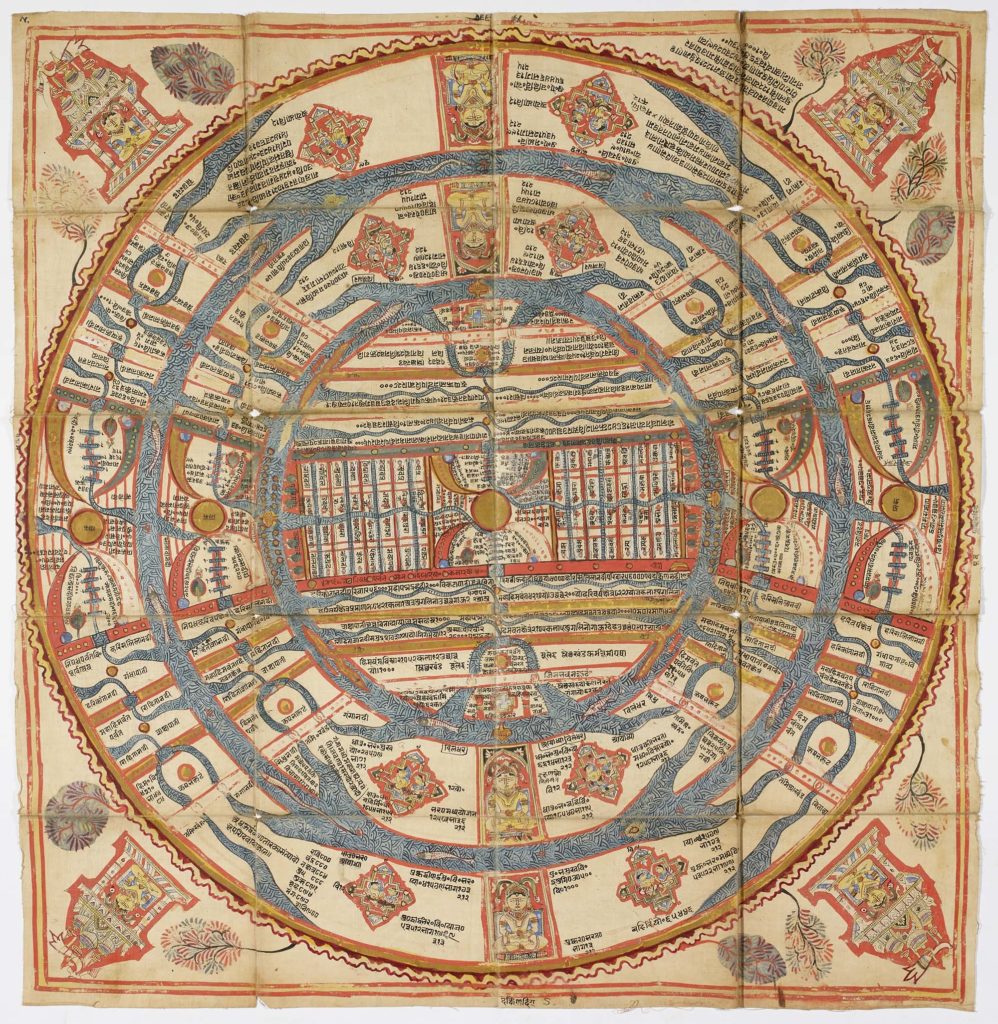 Talking Maps is at the Weston Library in the Bodleian Libraries, Oxford from July 5 2019 to March 8 2020. Admission is free.

An accompanying publication to the exhibition, Talking Maps (£35), by Jerry Brotton and Nick Millea, will be released by Bodleian Library Publishing in July 2019. Other maps books being published to coincide with the exhibition include Fifty Maps and the Stories they Tell (£12) by Millea and Brotton and Why North is Up (£20) by Mick Ashworth. All three titles are available for pre-order from www.bodleianshop.co.uk

One comment on “The curious, centuries-old art of maps and the stories they tell”