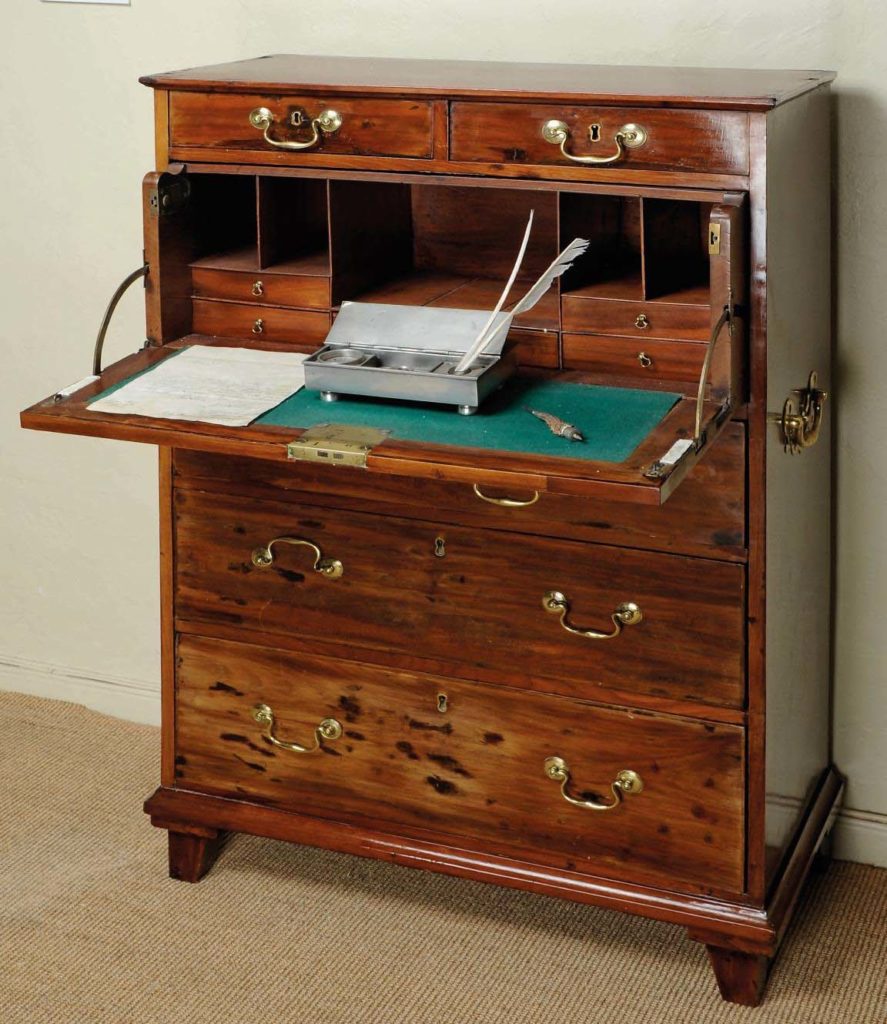 Ken Foster, Volunteer at the Captain Cook Memorial Museum in Whitby on why a naturalist’s desk fascinates him

As a volunteer at the Captain Cook Memorial Museum in Whitby, I would often choose to be in the room that houses this desk. It is a unique item in the museum as the only surviving piece of furniture that travelled with Cook and it also brings to life the people who used it.

The Försters, Johann Reinhold and his son Georg, were the naturalists on Cook’s second voyage. They were recruited at short notice when Joseph Banks withdrew just before sailing. They came from Nassenhuben, near Danzig, in Prussian Poland but were of English ancestry having fled Yorkshire in the mid seventeenth century because of their support for the Cavalier cause.

As someone who can trace his Foster ancestors back to the East Riding in the seventeenth century I can indulge a fanciful notion that they were distant relatives, which explains the shiver down my spine when I see the desk.

Johann Reinhold was a polymath with an extensive library of scientific books. His son Georg was only 17 when they set sail. 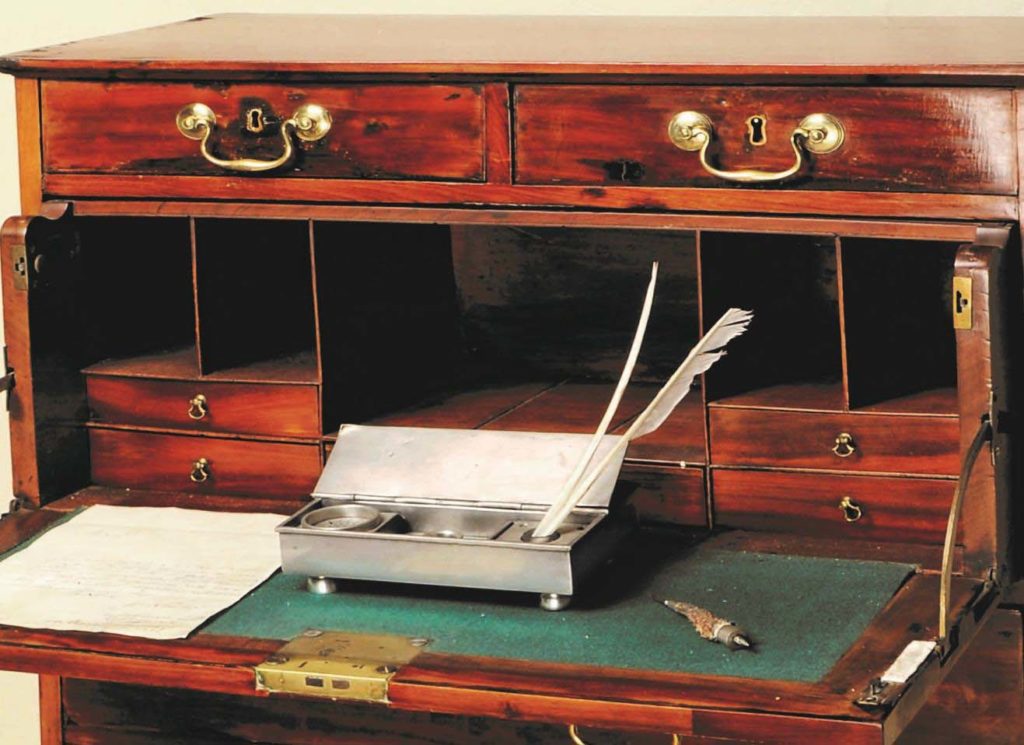 The desk was probably purchased from a London cabinet maker. It is made of mahogany, is sturdy and has side handles to allow it to be lifted. It has three lower drawers and a top drawer with a drop-down surface which allows it to be used as a writing desk. It is of a type commonly used on military campaigns.

On the desk there is a pewter inkstand with a pounce pot, an inkwell, and a quill. Next to it on the right is a knife. The pounce pot, or sander, contained powder which was used to dry the ink rather like blotting paper. It looks a bit like a salt cellar.

The ground powder, usually made from cuttlefish bone, was then shaken lightly over the paper. The pounce would absorb the excess ink quickly, within ten seconds, and so prevented smudging. Pounce could also be used to sprinkle on rough paper to make it smooth enough for writing.

The inkwell is a simple covered container for the ink. Quills for writing were normally large feathers, ideally the primary flight feathers of geese. They were dressed by forming a sharp tip which was then hollowed out to hold the ink. The knife used for this purpose was curved and designed with the blade flat on one side and convex on the other, which allowed cutting the quill to shape. It is also small enough to be held comfortably in the hand.

The desk was used by Georg Förster for the rest of his life. On his death it stayed in his son in law’s family until 1989 when it was purchased by the museum. 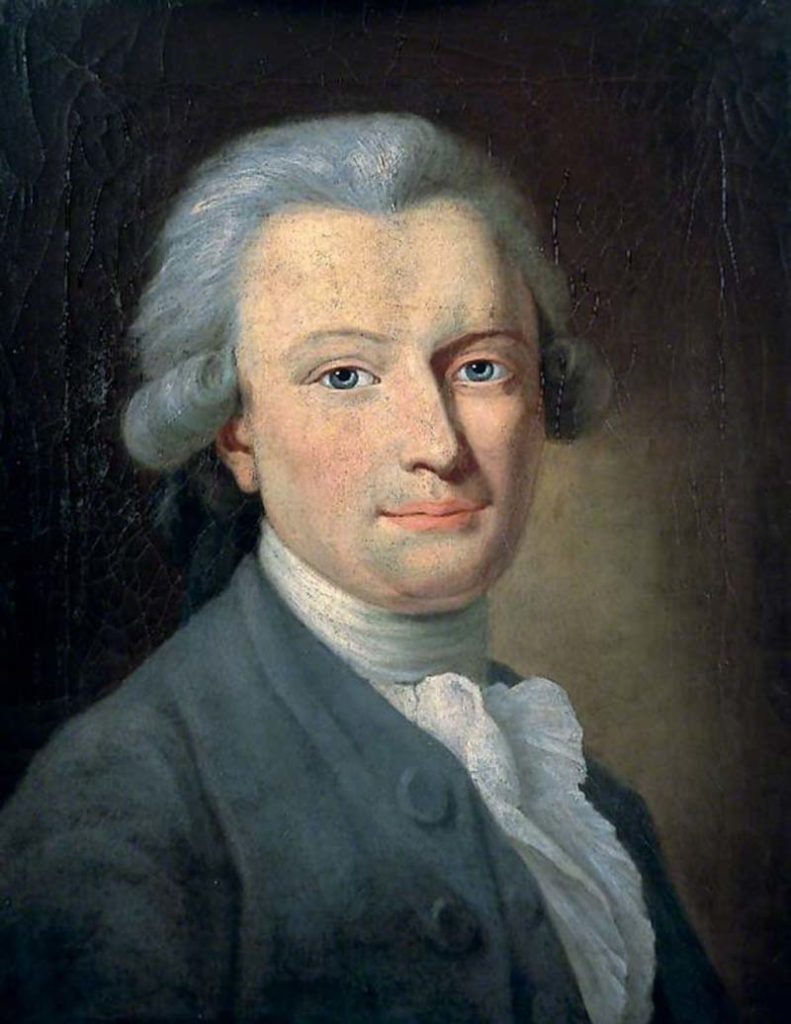 His latest biographer says it ‘contains a metaphorical richness in its symbolism of a life spent in the perseverance of writing.’ (J.Goldstein, 2019). For Georg Förster developed into an intellectual giant. He was a friend of Goethe, debated with Immanuel Kant and was a mentor to Alexander von Humboldt.

His description of the journey with Cook, A Voyage round the World (1777), has been acclaimed as the one of the earliest examples of travel writing because of its narrative structure and outstanding style. It also paints a complicated picture of South Pacific societies infused with a humanist stance of equality rather than European superiority.

The book gained him instant fame across Europe and he was made a member of the Royal Society at the age of 22. He is acknowledged as the first German ethnologist and is credited with establishing ethnology as a scientific branch of learning.

In 1787 he wrote an introduction to his own translation of Cook’s account of the third voyage entitled Cook der Entdecker (Cook the Discoverer), judged by one of his biographers as ‘the best essay ever written … on James Cook, his character and work and place in European history.’

He had liberal views on equality and freedom and was described by Engels as ‘the German Thomas Paine.’ In 1792, he was instrumental in establishing the Mainz Republic, the earliest republican state in Germany. He died in Paris in 1794.

As a retired academic, I spent much of my working life writing at a desk. Just like Georg Förster for me a desk symbolises intellectual endeavour and an integral part of life.