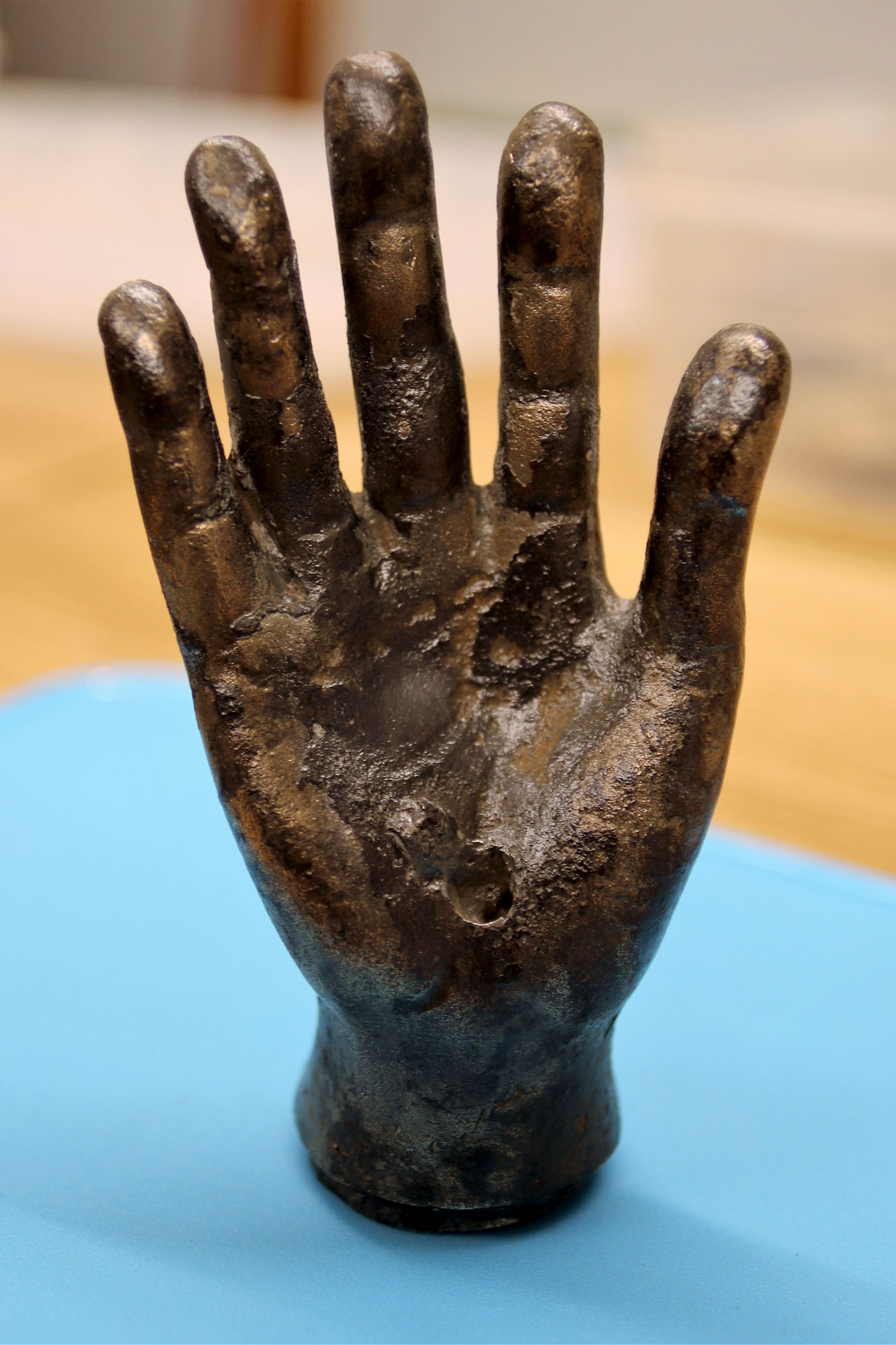 The archaeological digs at Vindlanda Roman fort are renowned for their remarkable finds – from preserved leather sandals to precious gold rings – each of them telling us more about life on Rome’s northern frontier at Hadrian’s Wall.

Targeting the distinct Severan period of Vindolanda’s history c. AD 208-212, an era defined by internal conflict, civil war, genocide and the rebellion against Roman rule, the latest five-year research excavation started at Roman Vindolanda in April 2018 and already the dig has unearthed a remarkable artefact.

In the top layers of the northern ‘Severan’ ditch fill, just 1.5 meters below the modern-day ground level, a small, child-sized, and eerily life-like bronze hand has been unearthed – apparently discarded in the ditch.

Close inspection after conservation at Vindolanda reveals that the 10cm hand originally had an attachment, now missing, inserted into the palm. 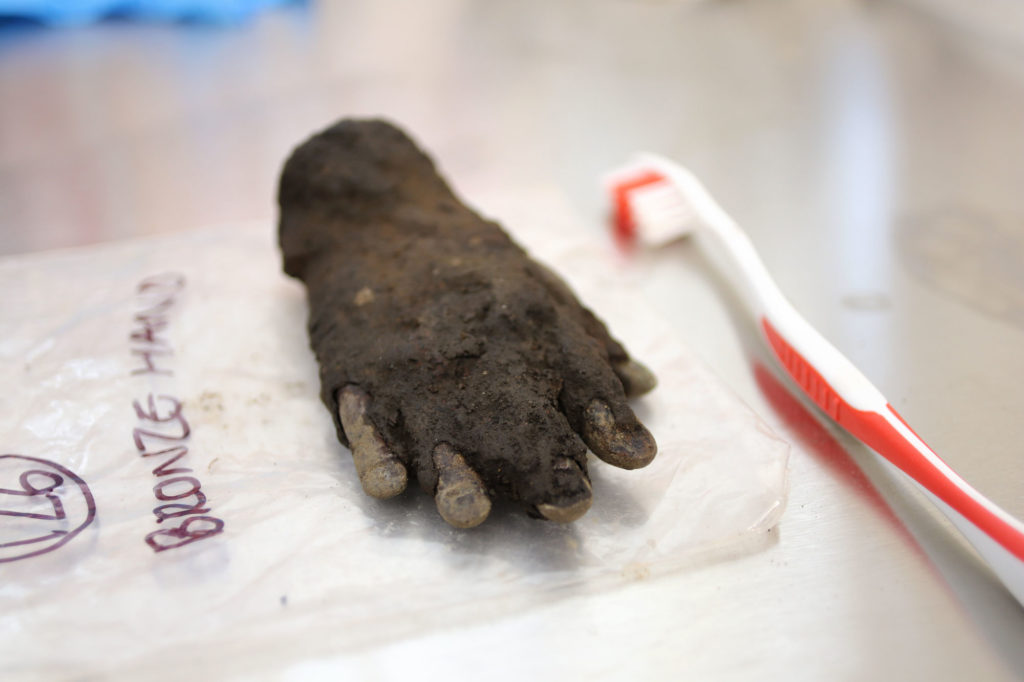 Very well crafted, especially on the palm facing side, experts think the hand’s purpose was to profile the object that it once held and its socket means it would have originally been fixed to a pole.

Archaeologists now believe the newly discovered hand most likely served a cult function and may have been closely associated with Jupiter Dolichenus, a god and mystery cult that was widespread in the Roman Empire from the early 2nd to mid 3rd centuries AD.

The hand was uncovered some metres beyond a temple dedicated to Jupiter Dolichenus, tucked into the northern wall of the third-century fort at Vindolanda, which was excavated in 2009.

Comparable examples of votive hands have been found at or close to other temples of Jupiter Dolichenus, although most are slightly larger than the Vindolanda example and some are fortunate to still have inscriptions referring to the god.

Jupiter Dolichenus is usually depicted holding a thunderbolt in his hand with upraised arm signifying his destructive power, the open votive hand symbolizes the protection and well-being that he could also bring.

“We did not expect to find such a beautifully preserved and rare cult artefact so soon after the start of the 2018 excavation season,” admits Dr Andrew Birley, CEO and Director of Excavations at the Vindolanda Trust.

“When we excavated the nearby temple to Dolichenus in 2009 it was clear that the temple treasures had been removed in Roman times. 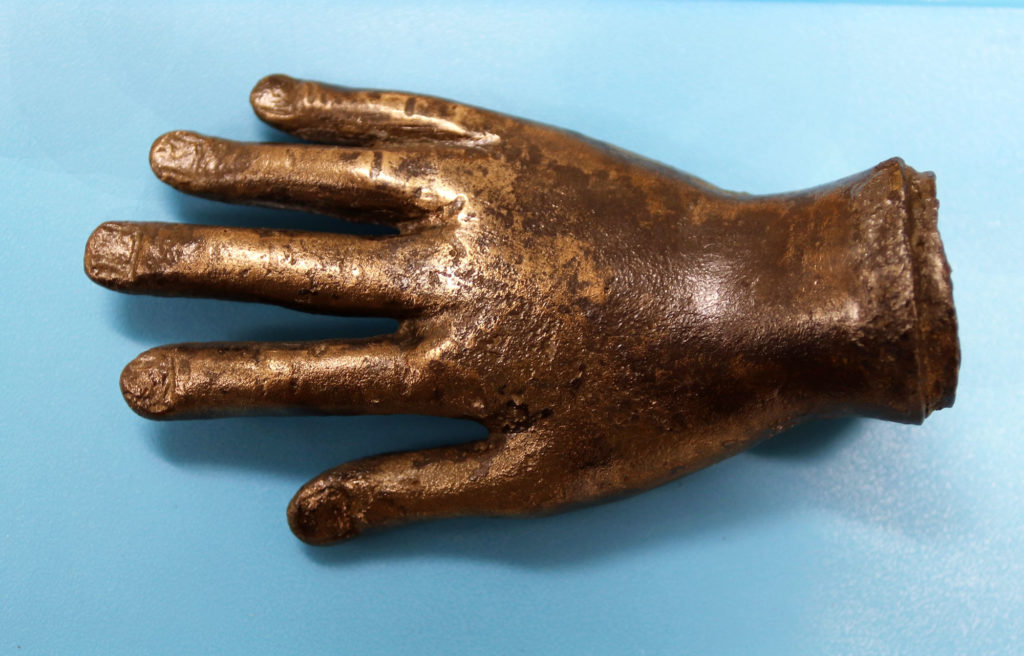 “However, this find being made in a nearby area reminds us that the life of the temple and the practices associated with the worship of Dolichenus had clearly stretched beyond the confines of its stone walls.”

The cult of Jupiter Dolichenus is shrouded in mystery as very little evidence has survived of its myths, liturgies or rituals. All that is known about the religion is based on surviving inscriptions, sculptures or other pieces of decorative art from different parts of the Roman Empire.

Archaeologists now hope the continued archaeological investigation of the site at Vindolanda will shed more light on the religious practice of Dolichenus in this period of history.

Visit Roman Vindolanda today and you will find one of the North East’s most famous and not to be missed tourist attractions lying in the beautiful landscape of Hadrian's Wall Country. Formerly a key military post on the northern frontier of Britain, Vindolanda is the home of Britain's 'Top Treasure'…