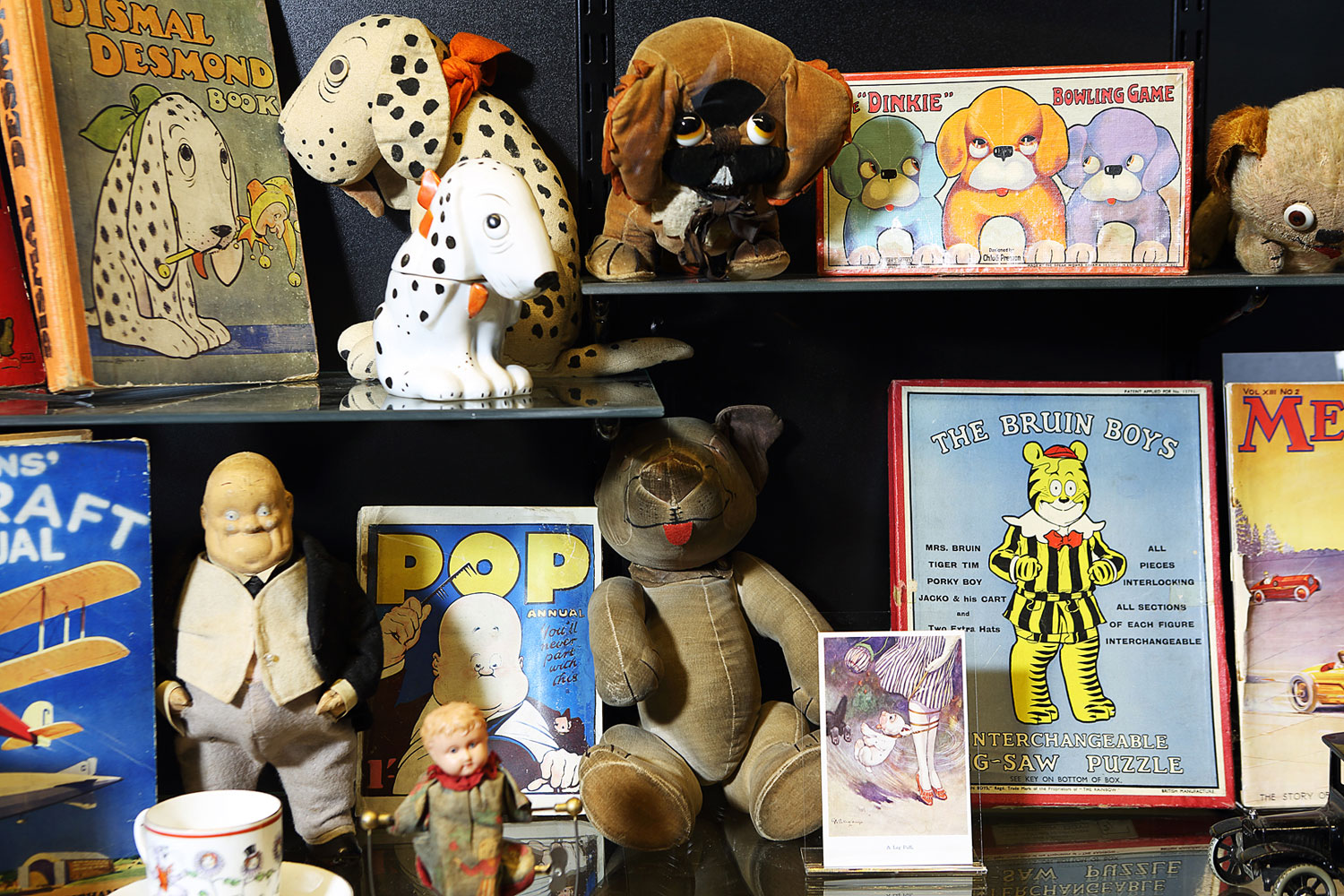 Courtesy the Museum of Brands, Packaging and Advertising

Aside from showcasing food and drink packaging, The Museum of Brands provides a fascinating glimpse into the evolving world of toys from Victorian Britain and beyond. Ruth Wainman explores

As you walk into the time tunnel at the Museum of Brands, you are quite literally taken on a journey into another era. The collection dates back to 1984 when consumer historian Robert Opie opened his first museum to reveal a fascination with consumer goods in all of their myriad forms, but for many, the Museum evokes memories of our most treasured possessions – our toys.

It should perhaps come as no surprise that toys feature heavily in the collection. Robert Opie’s parents Iona and Peter Opie, after all, were major collectors in their own right. Both researched and wrote extensively on children’s folklore and collected books, games and toys. At the Museum of Brands, toys sit almost seamlessly within a broader collection of consumer goods to help take us on a journey of rapidly changing trends, fears and aspirations. 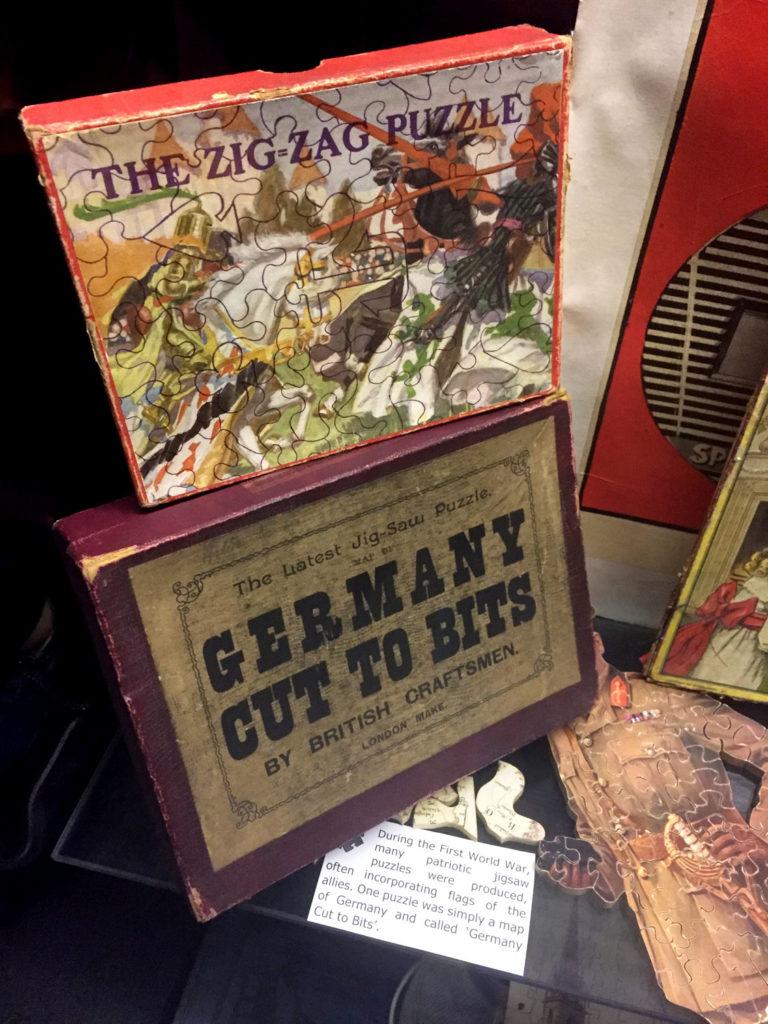 Tin soldiers reigned supreme in the Victorian and Edwardian Eras. Toy soldiers were hugely popular amongst Edwardian boys, including famous names like Winston Churchill and H.G. Wells, the latter of whom went on to write a book called Little Wars (1913) containing rules for war games. It has been estimated that by 1914, 15,000,000 figures were being produced annually.

On display can also be found a large selection of cardboard puzzles as manufacturers started to seek out more affordable materials to appeal to wider audiences. Picture building puzzles soon became all the rage. These puzzles came with a special key that described each piece so that the picture could be put together. But it was left to the most prized status symbol as the twentieth century took hold – the motor car – to take centre stage in games of the period. 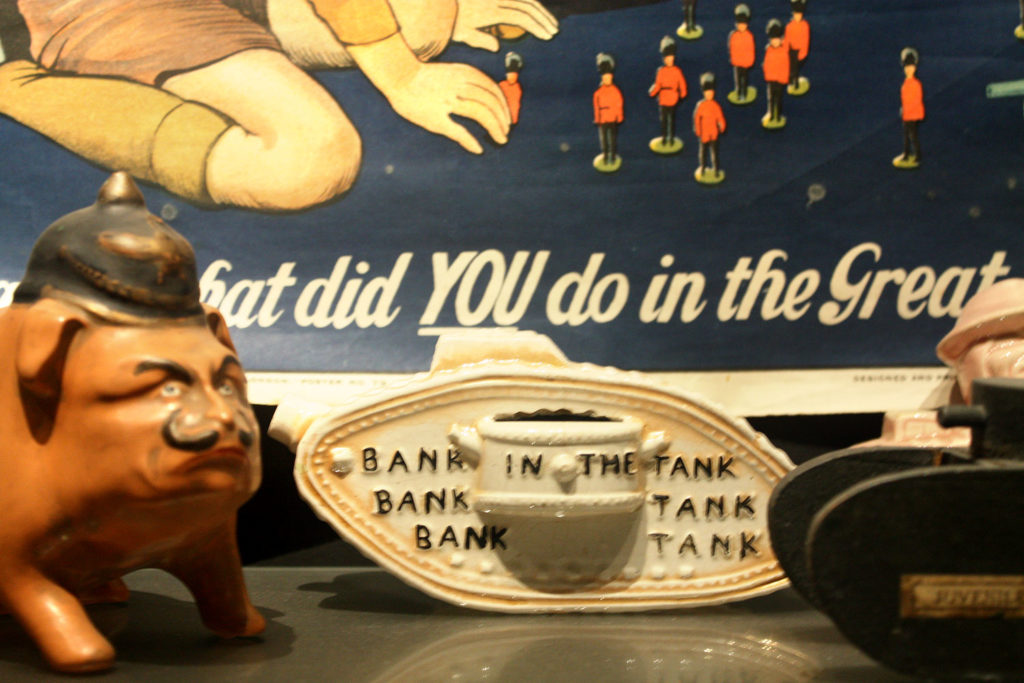 The First World War ushered in a number of war games that instilled patriotism and defiance whilst often leaving out the brutality of warfare. Some of these included The Battle in the Skies and The Air Raid on Berlin. The poster, ‘Daddy, What did you do in the Great War?’, also looms over the war games collection with its famous depiction of the boy with a set of tin soldiers playing at his father’s feet.

Frank Hornby was best known for creating the engineering toy Meccano in 1901. Later, Hornby branched out into trains. This included a clockwork train which can be seen on display in the section of the time tunnel on the 1920s. The train, like the Meccano toys, was designed along constructional lines so that parts could easily be replaced if they needed to be upgraded.

The development of new materials during the twentieth century also found their way into toys. One prominent example included a plastic model building toy called Bayko which took its name from the first synthetic plastic – Bakelite. The toy allowed children to create their very own houses using a variety of plastic building pieces that slid on to a series of metal rods inserted into a perforated plastic base. 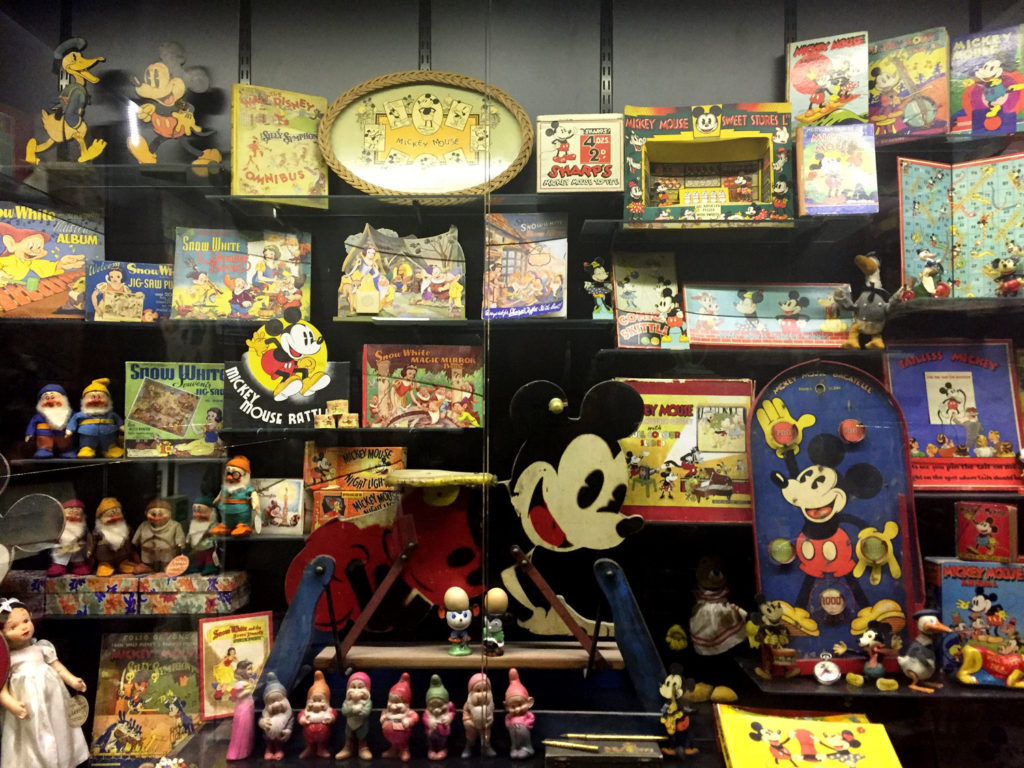 Walt Disney’s cartoon Mickey Mouse too features prominently in the collection. The mouse, who first made his début in 1928, inspired a whole range of toys and other memorabilia. Snow White and the Seven Dwarfs – which was eventually released as Walt Disney’s first full length feature film in 1937 – similarly inspired a whole range of toys that can be seen on display.

Manufactured toys feature less in the collection for the Second World War as rationing took hold and toy companies folded as a result of the shortages of resources such as metals. However, some war themed toys are still in evidence in the Time Tunnel. Look carefully and you can find a dart board game called Plonk featuring a bulls-eye illustrated with Hitler. 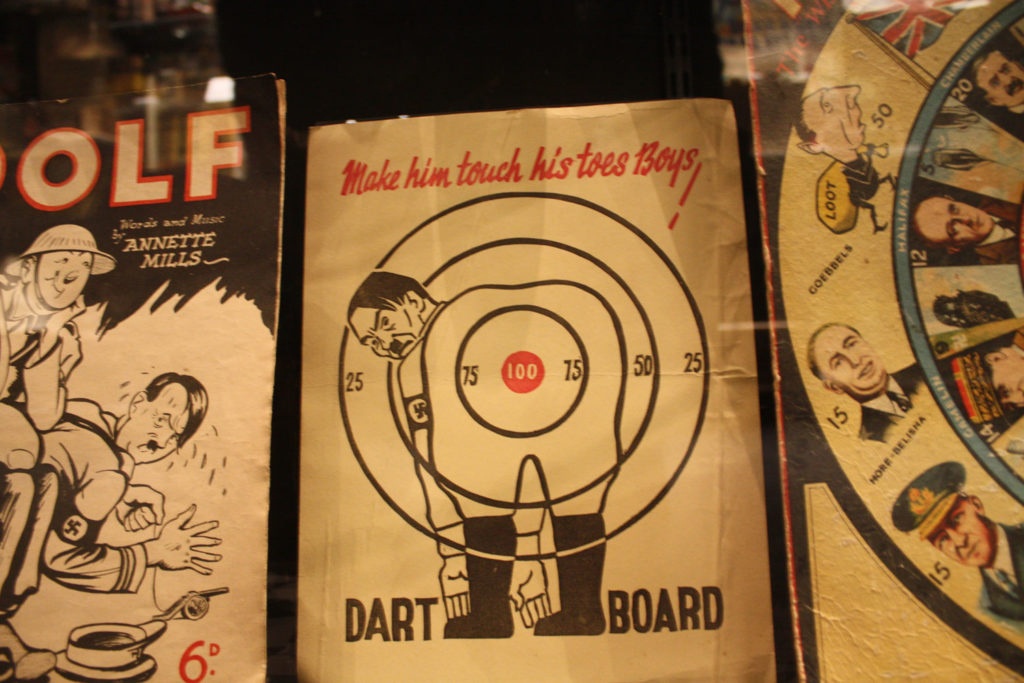 As the war ended, toys reflected a new fascination with space that played out amongst a backdrop of Soviet and American scientists competing against each other to win the space race. The time tunnel features many of the space-themed toys that started to emerge in the 1950s. Dan Dare – the square-jawed hero of the Eagle comics created by Frank Hampson and Marcus Morris – exemplified the fascination with science and space travel. Children could even take part in the action with Dan Dare themed rocket guns, walkie talkies and glove puppets.

The impact that television had on the demand for toys is another aspect the museum captures well by devoting plenty of space to toys and games based on films, TV series and quiz shows. Look out for Muffin the Mule who was one of the first stars of children’s television in 1946. 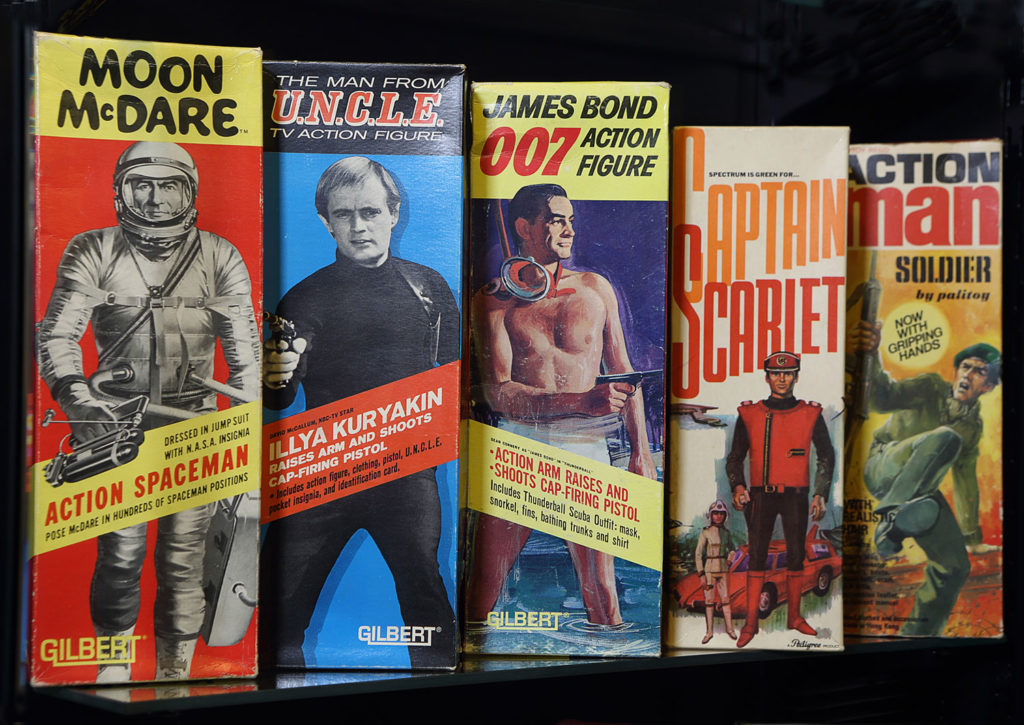 Courtesy the Museum of Brands, Packaging and Advertising

A particularly interesting find are the games that were designed to teach the population decimalisation as the British nation turned decimal in the 1970s. One of these games included a board game produced by Waddingtons called ‘Sum It!’. Other popular crazes included the now iconic orange rubber Space Hopper, with its cheeky grin, that allowed children to bounce to their heart’s content. Toys, for the most part, reflected a growing obsession with popular culture. You can tell from the sheer amount of figurines on display such as James Bond and The Man from U.N.C.L.E.

By the 1980s, advances in technology can be seen with the production of the Atari video computer and the ZX Spectrum. Electronic toys became more scaled-down by the time the Tamagotchi virtual pet was launched in the 1990s. But it was left to the arrival of the Furby to make electronic toys seem cute and cuddly. 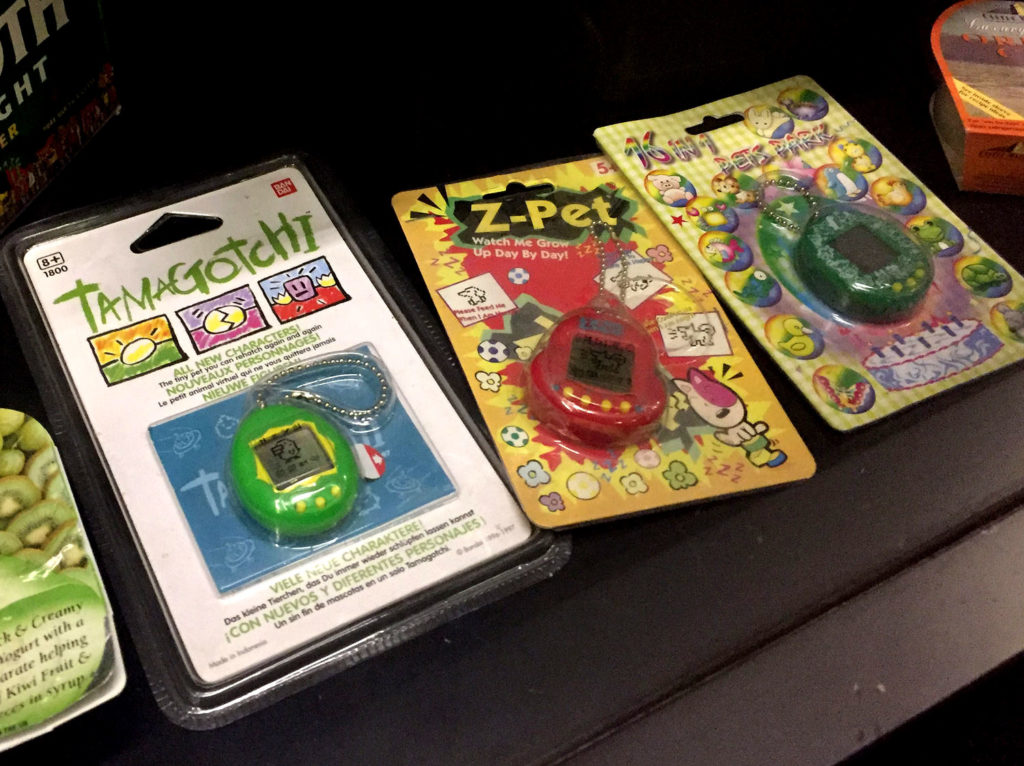 Toy Story created one of biggest crazes in 1996 with the launch of the Buzz Lightyear astronaut toy. The collection turns full-circle when we take into account how film, TV and music have helped to shape toys following the successes of Pokémon and the Spice Girls right through to Despicable Me and Frozen in the 2010s.

A great strength of the time tunnel layout is the way in which it allows us to see how toys have harked back to earlier trends and continue to evolve. As Buzz Lightyear would say: ‘to infinity and beyond’. Toys at the Museum of Brands certainly capture that idea.