With more than 100 objects displayed, the Foundling Museum tackles the ribald world of Georgian theatre-going

Although theatre in Britain boasts a long and revered history, from the Romans through medieval mystery plays to the time of Shakespeare, it wasn’t until the eighteenth century that theatre-going properly flourished as a popular pastime.

Wedged between the highbrow bawdiness of Restoration comedy and the advent of popular Music Hall, Georgian theatre goers were of all classes, and although class distinctions were played out in the cheap and the expensive seats, theatre visits would offer a variety of entertainments catering to all tastes on the same bill. In one night you might enjoy a play, some ballet and a taste of operetta before being entertained by rope-walkers, singers and acrobats.

Little wonder then that this smorgasbord of Britain’s Got Talent-style entertainment is credited as contributing to the vast range of audience experiences we know today.

As a result of its mass appeal the entertainment industry saw rapid expansion in the late 1700s with many theatres built and music festivals beginning in both London and the provinces. It is said that by 1800 London had as many theatre seats for sale as the city’s population. 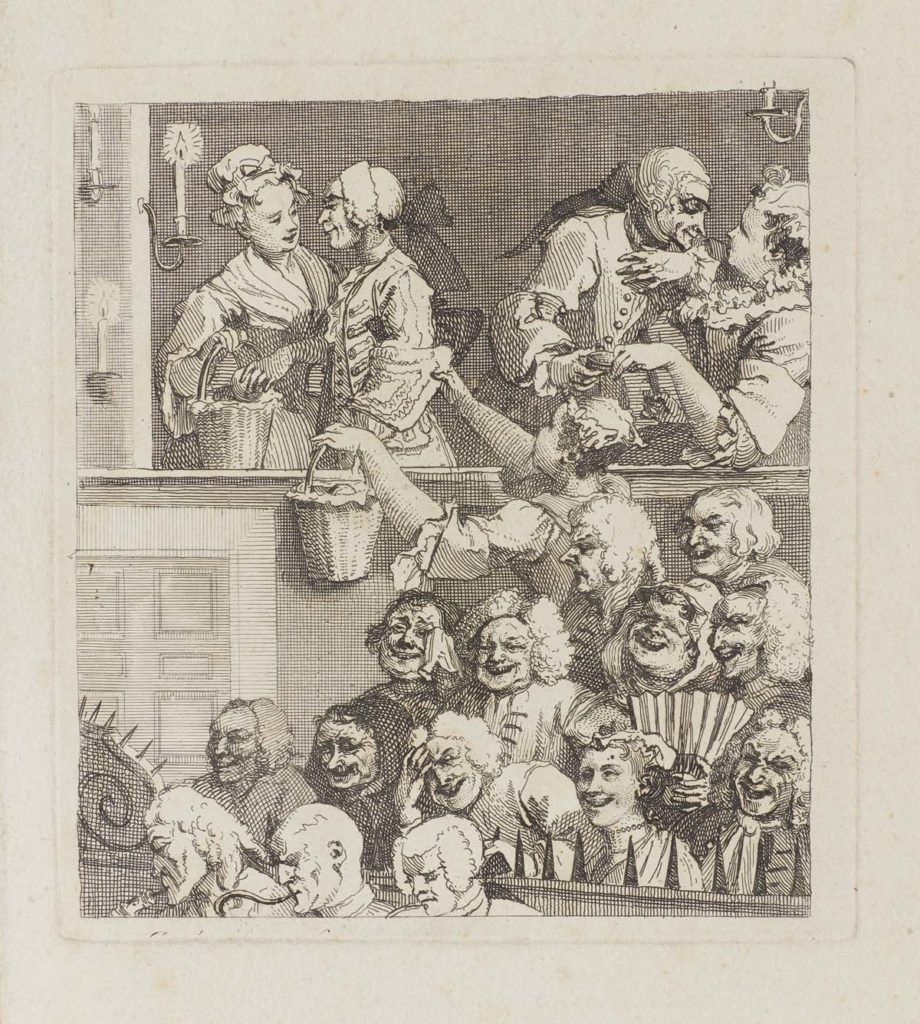 Inside the ever expanding choice of playhouses, ribald audiences would consume food and alcohol, arrive and leave, chat among themselves mid performance and sometimes pelt actors with rotten fruit and vegetables. The pit in front of the stage is often depicted as a notoriously dangerous spot – packed with pick-pockets, prostitutes and vociferous young men.

Contemporary prints and descriptions paint a picture of raucous behaviour and organised chaos – there was even a riot at the Covent Garden Theatre in 1763 after the manager refused to issue half price tickets for an opera.

Needless to say this milieu provided rich pickings for the artists and caricaturists of the day and the Foundling’s wide-ranging exhibition is full of vibrant artworks and images that evoke this colourful time.

A how-to guide to Georgian theatre-going

Leading artists including Hogarth, Hayman and Lambert, also crossed over into the world of show business as set designers and scenery painters and many of them captured the theatre experience in all its glory.

Billed as a ‘how-to guide’ to going to a show in the eighteenth century, the exhibition is displayed throughout the whole museum and delves into the mechanics of eighteenth and nineteenth century theatre going, at a time when theatre was central to culture and even politics. Thomas Macklin’s play The Man of the World (1781) was refused a performance licence on two occasions by the Examiner of Plays because of its wry take on parliamentary politics and the premiership of Lord Bute whose reckless taxation policies in America were seen as one of the major causes of the American Revolution. 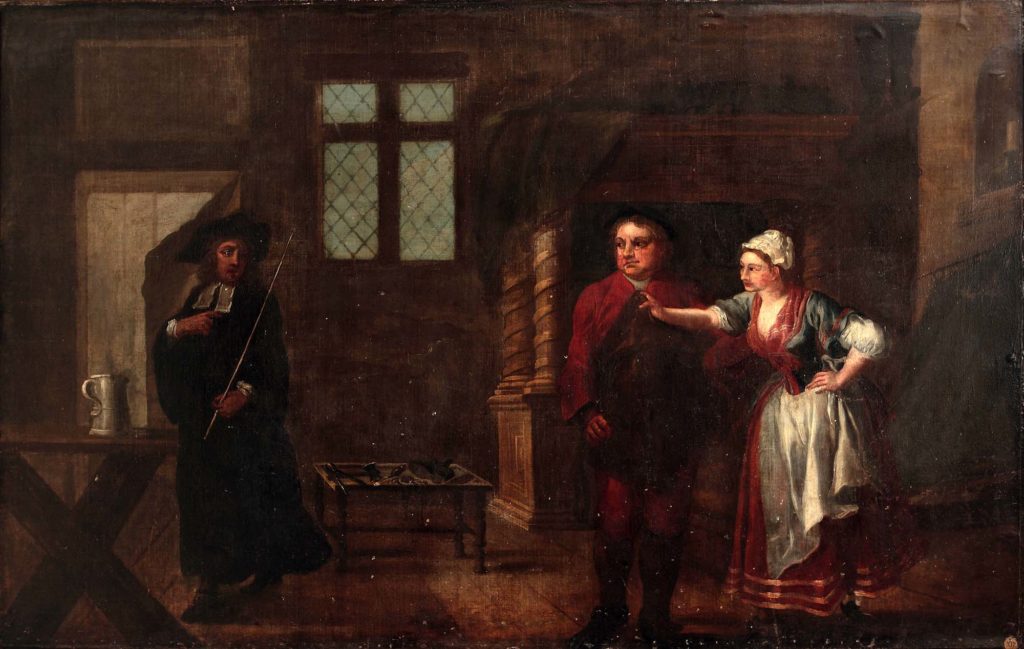 From theatre managers, set designers and scenery-painters, to the refreshment sellers and ticket collectors, the exhibition delves into some of the behind-the-scenes roles and key venues in London and the provinces, taking in the famous theatres of Drury Lane, Covent Garden and Richmond, as well as the Vauxhall Pleasure Gardens and the Foundling Hospital Chapel. Provincial music festivals of other major cities in Britain are also explored among the many exhibits which include a model of Britain’s oldest working theatre and a 1785 set model from the Theatre Royal, Covent Garden.

Artworks on display include many caricatures and drawings of Georgian audience members, who came to see and be seen. Original advertising, programmes and tickets are displayed alongside information about how Georgian audiences purchased tickets, which led to the development of the modern-day ‘box office’. For those who could afford them, specially designed fans detailed the seating arrangements in some theatres and opera houses and even helped the owners spot the rich and famous in the audience. One such opera fan in the exhibition is printed with the names of the occupants of the boxes for the 1800 season at the King’s Theatre and among the many printed advertisement bills and tickets is one that asks women to attend without their hoops, and men without their swords.

Exhibition visitors can also discover how ladies managed to avoid queuing for the toilets; how lighting levels determined the audience’s choice of dress; the arrangements made for servants, such as the specially designed ‘pigeon holes’; and systems for carriage parking.

Another important highlight is an original eighteenth-century supper box painting, Devil to Pay, by Francis Hayman (1708-1776) which is on public show for the first time in more than 200 years. It depicts the famous actress Kitty Clive and once hung in a supper box at Vauxhall Pleasure Gardens, which attracted thousands of visitors to its various pleasures and entertainments.

It was only after the Messiah performances in the Chapel that the work became popular and established itself in the British musical canon. Images, manuscripts and tickets from the Museum’s remarkable Gerald Coke Handel Collection, which has over 12,000 objects, help to tell this story.

The Foundling Museum is a force for change. We bring past and present together to stimulate imaginations and enrich young lives. With a campaigning spirit and the courage of our convictions, we celebrate the work of artists and inspire people to take positive action that transforms the lives of children…