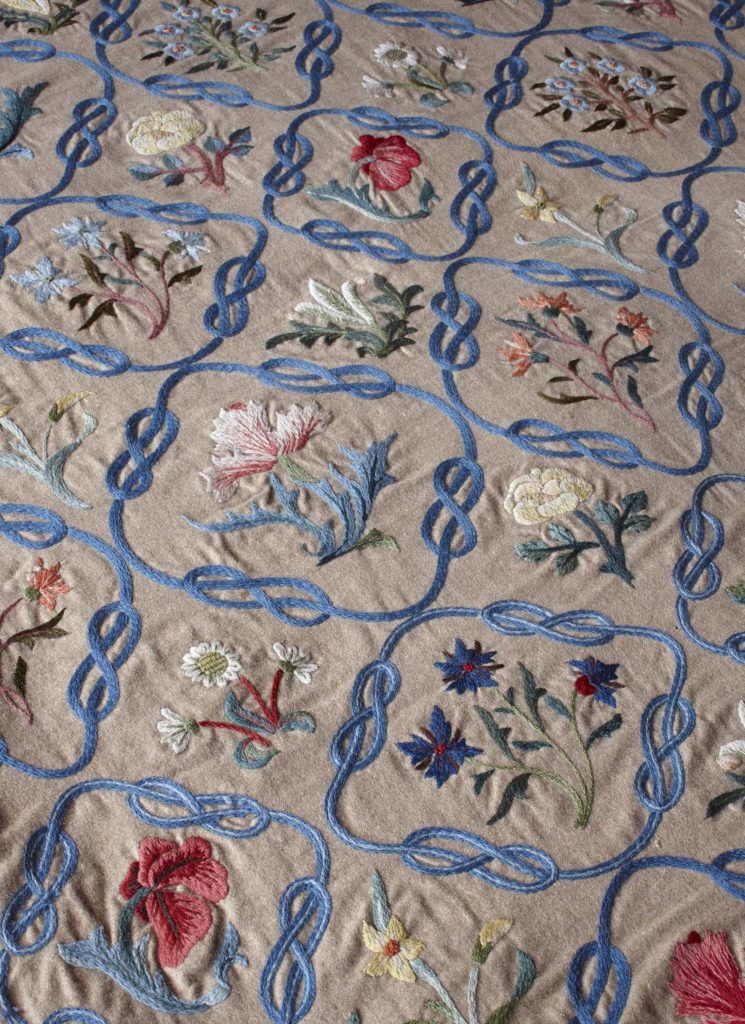 Detail of the bed spread made by May Morris for Mrs Walker when she was bedridden at the end of her life. Paul Higham for Emery Walkers Trust

May Morris may have been overshadowed for many years by her famous father William, but in recent years she has stepped into the limelight as an outstanding artist in her own right.

A Hammersmith resident from 1878 to 1920s, she was a lecturer, writer, editor, accomplished designer and jeweller, but it is her work as an embroiderer that is today considered her greatest achievement.

This skill led May to be in charge of the embroidery side of her father’s business, Morris & Co for which she employed West London residents, including Lily Yeats (sister of WB Yeats), at the Hammersmith workshops in Upper Mall, Iffley Road and her home at 8 Hammersmith Terrace.

Hammersmith had become a hotbed of Arts & Crafts artists, who collaborated and congregated at the Morris’s home at Kelmscott House for weekly Socialist meetings in the coach house. May’s friends included the playwright George Bernard Shaw who moved into Hammersmith Terrace with her and her husband, Emery Walker’s family next door at number 7, and designers Eric Gill and Edward Johnston. 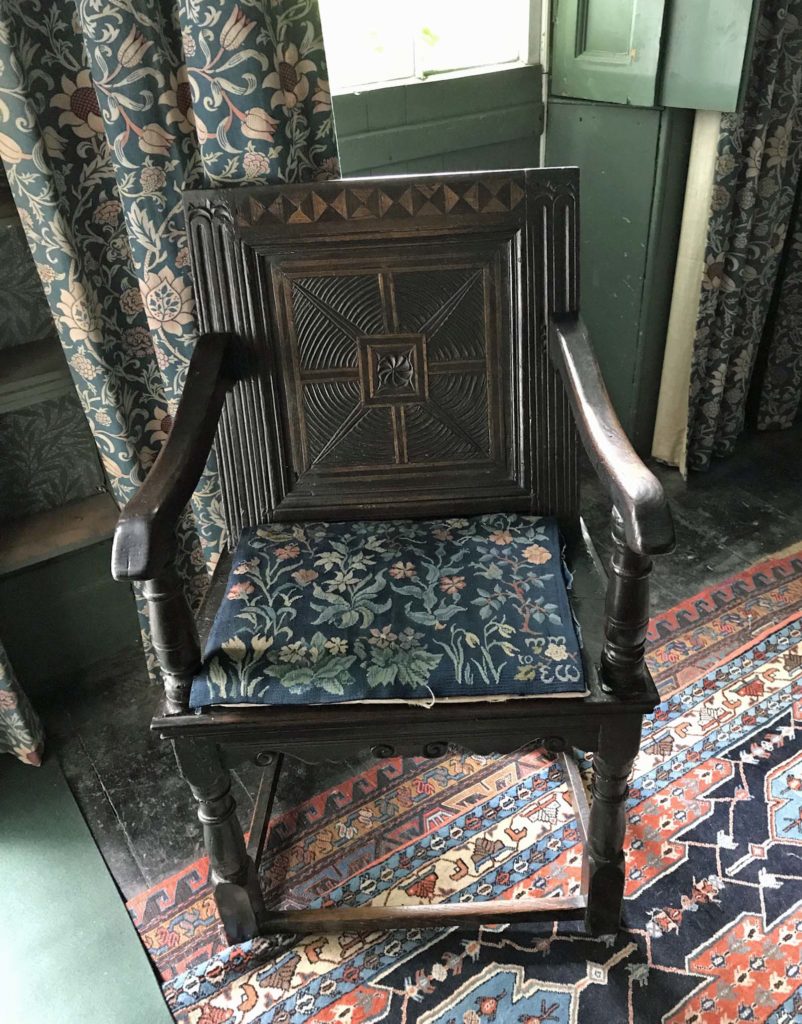 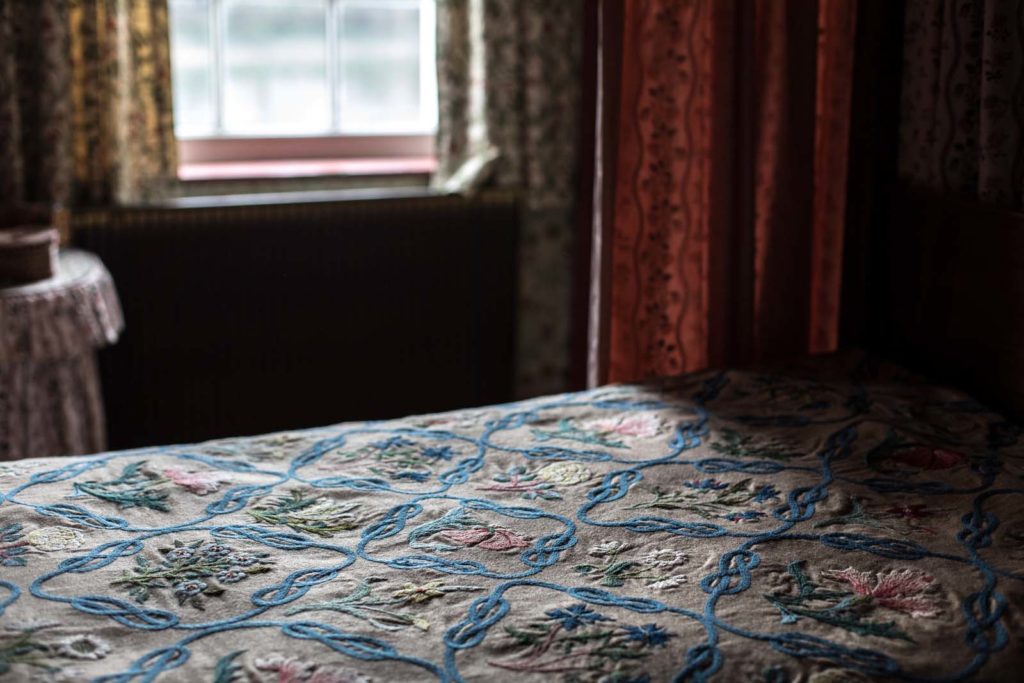 The May Morris bedspread in the bedroom. Photo taken by Anna Kunst

The close relationship with the designer printer Emery Walker and his wife Mary can be seen today in the preserved Arts and Crafts interior of Emery Walker’s House.

From the exquisite Edward Burne Jones portrait of May to the seventeenth century chair that once belonged to William Morris with its seat cover bearing the initials MM to EW (May Morris to Emery Walker) in the sitting room, the Arts and Crafts interior is full of clues.

In the bedroom, the bed of the Walker’s daughter Dorothy is adorned with an exquisite crewel worked bedcover originally made by May Morris for Emery Walker’s wife Mary, when she was bedridden at the end of her life.

Such was the status of the May Morris bedcover in the household that it was used as a pall on Mrs Walker’s coffin in 1920, then Emery’s in 1933 before adorning that of Dorothy in 1963 and the house’s last private custodian, Elizabeth de Haas, in 1990. 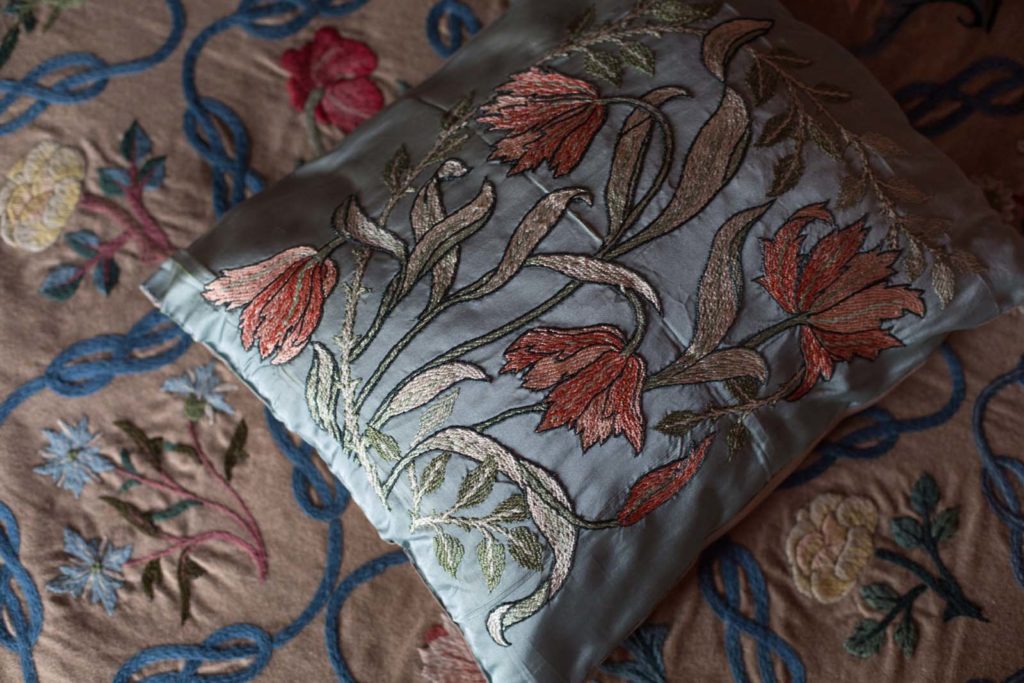 Silk cushion designed by May Morris and embroidered by Dorothy Walker. Photo taken by Anna Kunst

“What distinguishes her from her designer father William Morris and her mother Jane, who was a skilled needlewoman, is that May could both design and embroider, and was amazingly skilled at both,” explains Helen Elletson, Senior Curator at Emery Walker’s House and Curator of Research and Development at the William Morris Society.

“Like her father, she was multitalented and could design and make jewellery, write books on needlework, and lecture on embroidery both here and abroad.”

“You can detect from the ways that she puts her colours together that she had an extensive knowledge of nature and medieval embroidery.”

Berlin wool work had become the norm, a much more prosaic form of needlework typically executed with wool yarn on canvas worked in a single stitch such as cross stitch.

May’s knowledge of needlework, her talent for designing and her brilliance with the needle led to her helping to re-establish the status of embroidery to fine art in Britain and her designs and completed embroideries show why she was one of the most significant artists of the Arts and Crafts movement. 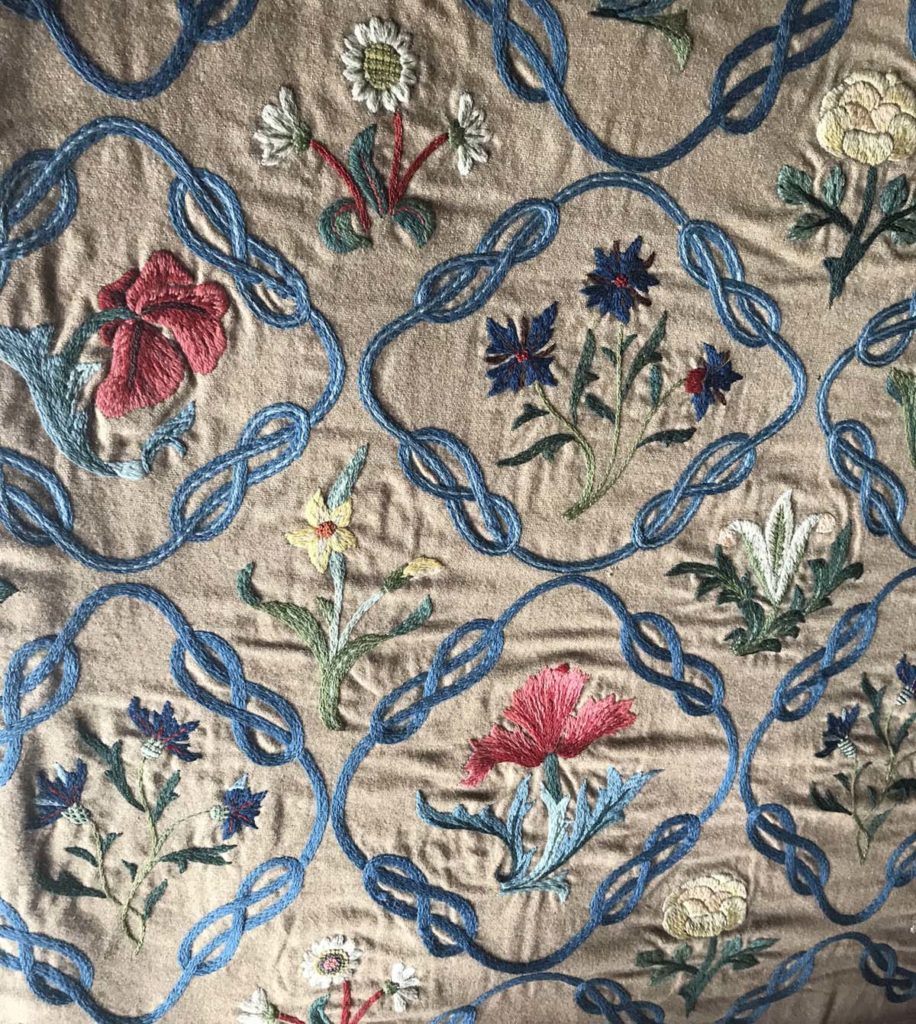 A live, interactive talk A Remarkable Woman: The Arts and Crafts Embroidery Designs of May Morris presented by Helen Elletson takes place online on Thursday March 25 2021 at 3pm.

The talk is part of a programme of monthly events via Zoom organised by Emery Walker’s House Trust. Prebook via Emerywalker.org.uk Entry is by donation.

No 7 Hammersmith Terrace is a tall terraced house on the River Thames at Hammersmith in west London. Its sober Georgian exterior hides a secret – the decoration and furnishings preserved as they were in the lifetime of the printer Emery Walker (1851-1933), a great friend and mentor to William…