Some twinkling with metal threads entwined into the design and some an intricate web of lace, there are over 120 samplers on display in Sampled Lives: Samplers from the Fitzwilliam Museum.

Girls as young as nine painstakingly stitched each of these exquisite delicate specimens of needlework, each of them demonstrating the diligence and self-discipline of their crafters.

A kind of stitched CV, samplers were a way to show a young woman’s competence as a potential wife or mother, or perhaps to seek employment where such skills would be essential.

Nestled within a Biblical scene of Adam and Even in the Garden of Eden, nine year old Sophia Ellis has embroidered a message which reads: “Health is a jewel dropt from Heaven which money cannot buy the Life of Life the Bodies peace and pleasant Harmony.”

A stitched alphabet frames the work, and this was not uncommon, for girls would often practice their literacy and numeric skills alongside. Many would use the opportunity to include secret messages hidden within the symbolism of the images used, sometimes voicing their political or religious beliefs. 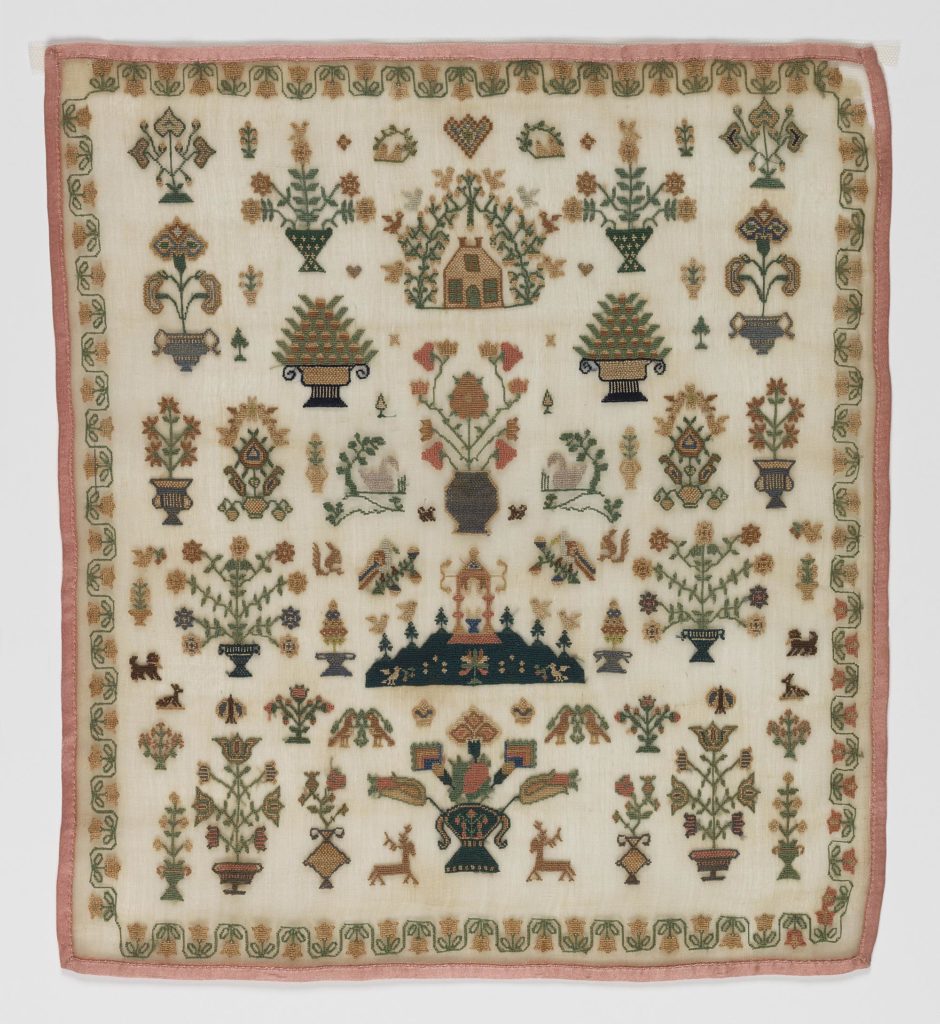 The scene illustrates the widely-known Old Testament story in which Eve is deceived by a serpent into picking fruit from the forbidden tree of knowledge, inviting Adam to share after consuming it herself. The next section is made up of various detached motifs arranged symmetrically either side of a turreted building guarded by soldiers, including rural imagery of trees, stags, birds, squirrels, dogs and baskets of fruit.

Their sensitivity and delicacy means that one of the most harmful dangers posed to the samplers is light exposure. For this reason they must be well-protected and can only be seen on rare occasions. This is the first time so many remarkable works from the Fitzwilliam’s collection have gone on display together.

The exhibition is accompanied by an illustrated catalogue by Carol Humphrey, Honorary Keeper of Textiles at the Fitzwilliam, revealing the complexity of the coloured silk stitches.

Describing them as “a stunning example of the needlework of the past” and “a masterclass for anyone interested in the changing fashions and styles of embroidery over the centuries” Carol Humphrey said: “Much has changed in the study of samplers during the last thirty years or so. Now samplers can be seen as a valid means of studying the circumstances and material culture of their makers.

“When researched in depth, they can reveal not only personal details about an individual girl but also provide a key to family histories.”

Map sampler. Seaton, Ann, English. Lines of double backstitch in three colours frame a map sampler of England and Wales. The counties and main towns are marked, as are the neighbouring parts of Ireland, Scotland, France and the Channel Isles. A compass point is worked to the lower left of the map and a very worn inscription on the bottom right reads ‘Ann Seaton Lincoln 1790’. Embroidered with polychrome wool threads in cross, double back and satin stitch. The bottom edge is raw; the other edges are turned under. Length 52 cm, width 47.75 cm, 1790.

Embroidery/Spot motif sampler. Unidentified Maker. Probably worked by Mary (b. 1608), daughter of Amyas Chichester; or Mary (b. 1615) or Margaret (b. 1619), daughters of Henry Chichester of Arlington Devon. Embroidered on linen with polychrome silks in tent, cross, long-armed cross, back, chain, eyelet, rococo and faggot stitch with pulled work. Silver and silver-guilt thread is worked in braid and interlacing stitches, and there is laid and couched work with one spangle. Three of the edges are hemmed and there is a selvedge with a single blue line on the right side. Length 42.25 cm, width 27 cm, circa 1620-circa 1640. England, Devonshire. 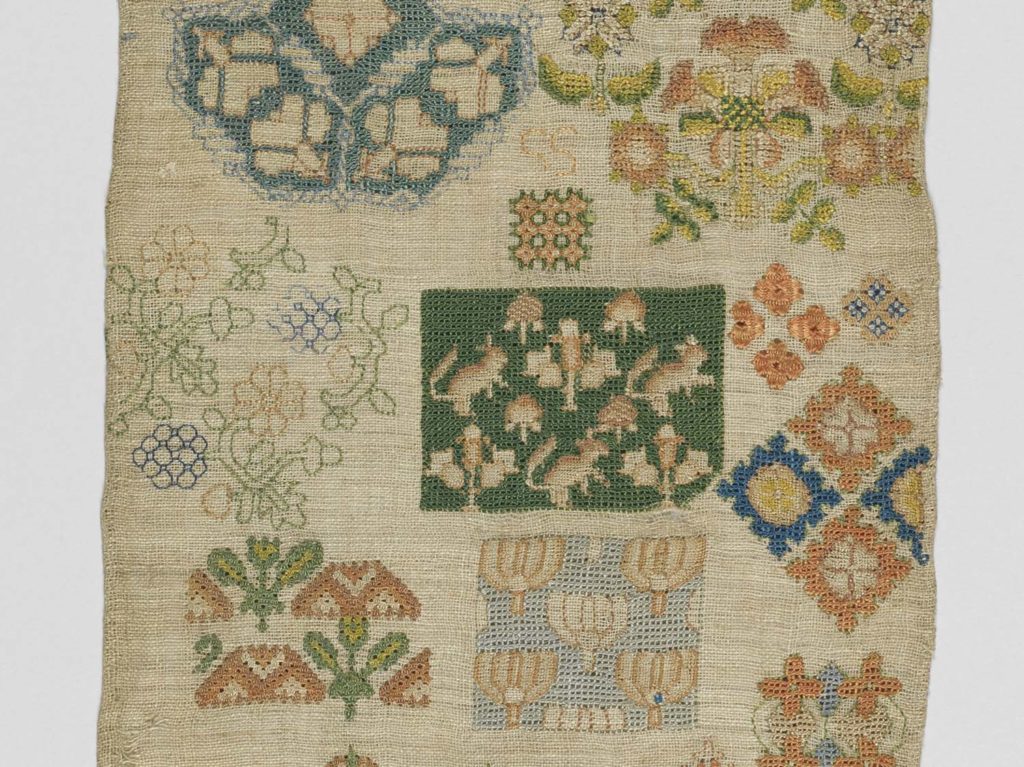 These masterpieces not only unlock a personal insight into the worlds of mid-17th century English Quakers and 20th-centruy schoolgirls, they also serve as a historical source to reveal the evolution of different embroidery styles throughout the centuries.

In one charming plea dating to 1795, Sarah Williamson reaches out to God to provide her a bright future, whilst thanking her parents for her upbringing. Before proudly informing us that she is in the tenth year of her age, she writes:

“Next unto GOD dear parents I address Myself to you in humble thankfulness For all you: Care & Charge bestowed The means of learning unto me allowed Go on I pray and let me still pursue/ Those golden Arts the Vulgar never knew.”

Not only do these twinkling visions delight our eyes, they also remind us of social cultural histories of times gone by.

Sampled Lives: Samplers from the Fitzwilliam Museum runs until April 8 2018. Admission is free.

From Egyptian coffins to Impressionist masterpieces – the Fitzwilliam Museum's world-class collections of art and antiquities span centuries and civilizations.