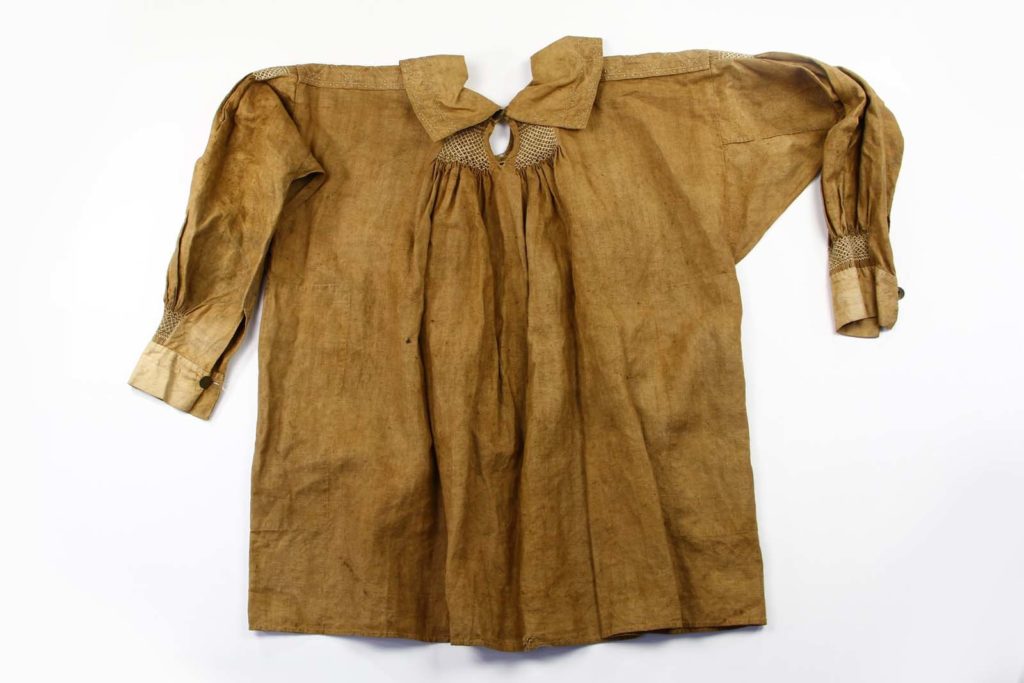 A Surrey round-smock, with very little embroidery from Guildford Museum’s collection The name ‘Edmund’ is written on the hem. From the Chobham area. © Guildford Heritage Service

What do you think of when you see a smock? These simple voluminous, hand crafted garments have become the visual representation of the countryside and traditional rural life in Britain.

Working-class men’s dress in museums is rare but every museum I have worked in has a collection of smocks, which seems odd. Why have these survived when other clothing hasn’t?

They are actually a coat or overall that goes over a suit or shirt, jacket and trousers. But most museums seem to display them on their own because they don’t have the clothes to put under them and this can make them look like a dress. Smocks are not usually the star of the show, they are used to tell a story about rural working life.

Smocks were worn from the mid eighteenth century until the turn of the twentieth century. Their heyday was the first half of the nineteenth century. They were shown at the Great Exhibition of 1851 and Oxfordshire Museums based in Woodstock has some particularly wonderful examples from named women makers whose smocking was exhibited there but as agriculture became more industrialized, the smock became unfashionable as workwear. It was too big and voluminous and there was a real danger of it getting caught in the new machinery. 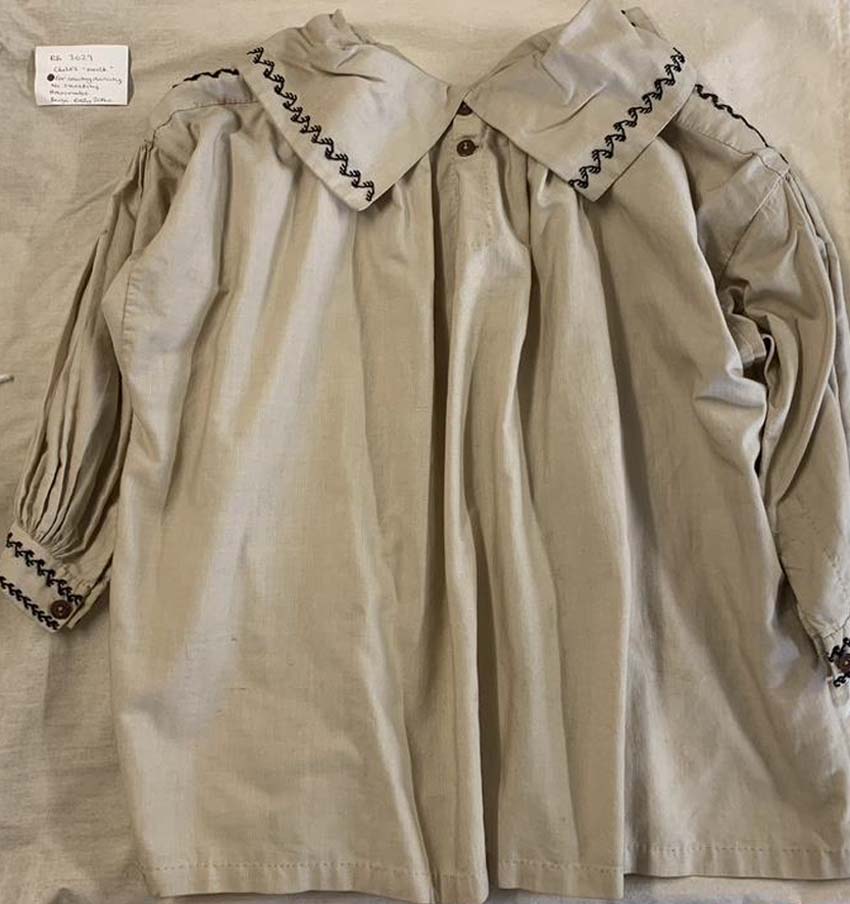 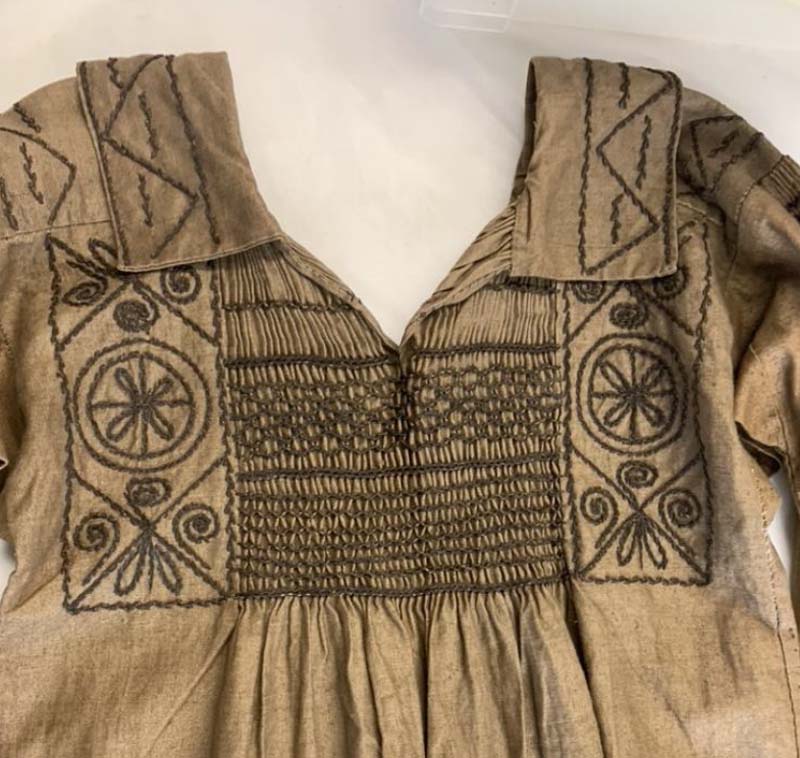 Detail of embroidery around the collar of a smock in the Guildford collection. © Guildford Heritage Service

Smocking is the name given to the technique of gathering and decoratively stitching fabric. What the smocking is actually doing is to control volume and provide a certain amount of strength and waterproofing. When you first look at them or see them in museum stores they don’t always seem interesting because they are often natural-coloured fabrics, usually linen in a variety of shades of white, cream and beige through to brown. And they can sometimes be a bit dirty because they are working items.

But when you study them closely, the detail of the embroidery and the stitchwork is very beautiful and intricate. I have tried smock making and because the fabric is so heavy its really difficult to get such fine detail; it is incredibly skilled work.

I believe that most museums acquired smocks because of an interest in objects and crafts that were seen to be disappearing because of industrialization in the late nineteenth century. At Guildford Museum we have the collection of Gertrude Jekyll, the famous gardener and arts and crafts practitioner, who collected what she described as Old English Household Life.

She was very interested in the West Surrey countryside, which she had seen growing up and which seemed to her to be vanishing in the late 19th and early 20th century. She donated her collection of “Cottage Objects” to Guildford Museum.

In 1911 an extension to the museum was built to house it, now called the Gertrude Jekyll Wing, and whilst Jekyll’s collection doesn’t include smocks, she dedicates a chapter of her book ‘Old English Household Life’ to traditional costume including the smock which she describes as ‘a capital thing for all country purposes’! 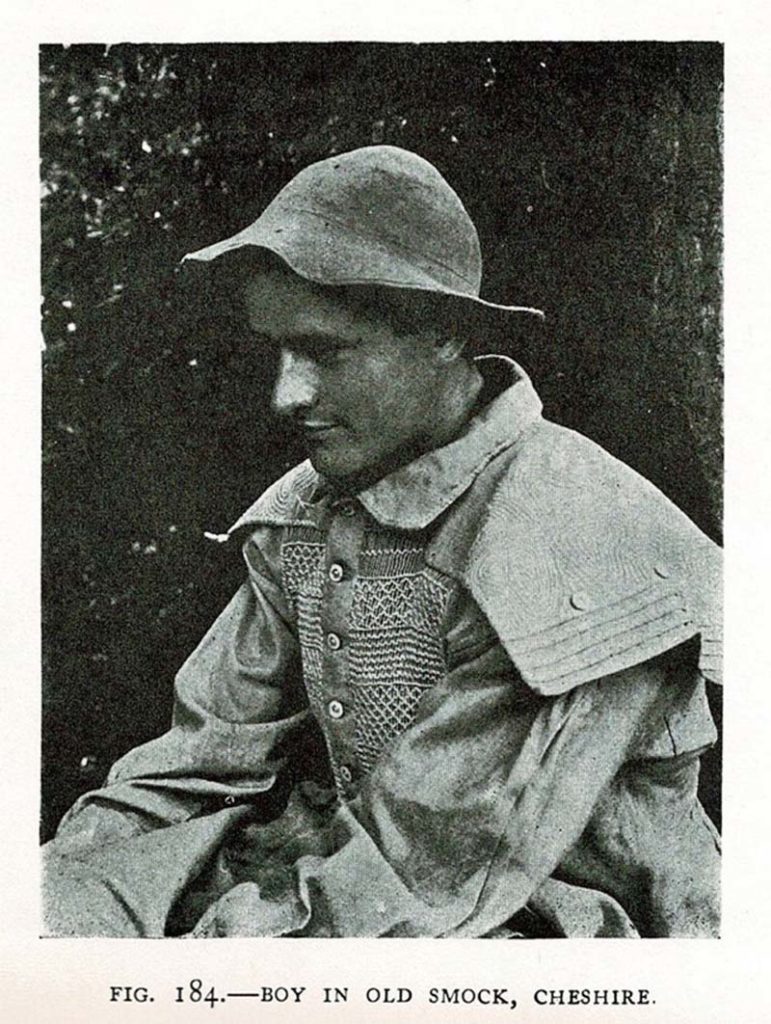 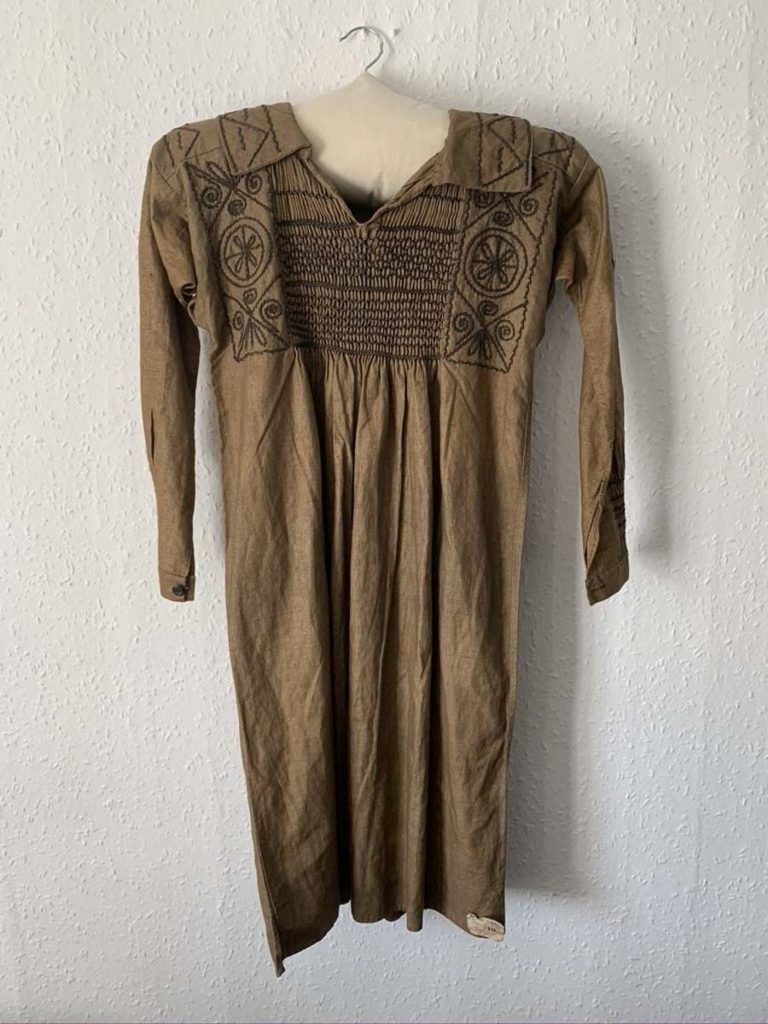 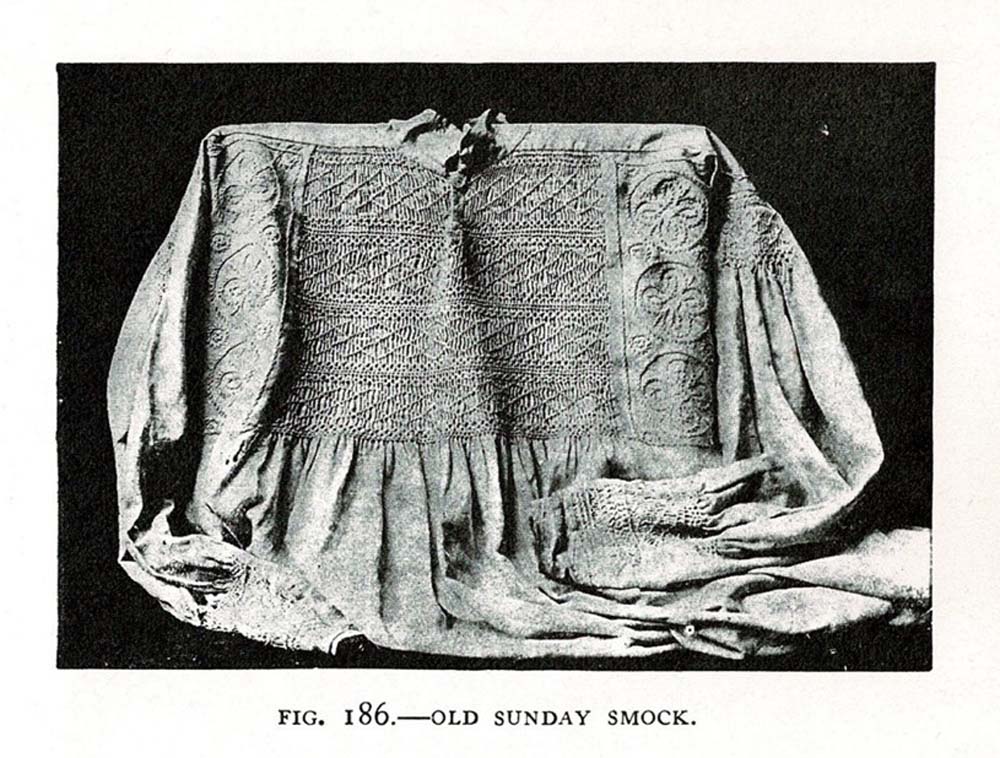 Guildford Museum’s smock collection is part of the needlework collection, founded by a keen embroiderer, Joan Drew. It’s likely the smocks were collected for the quality of their stitchwork. The collection has examples which date as far back as Ancient Egypt, but the majority of it is English and includes samplers, quilts, embroidered waistcoats, examples of specific types of stitch and needlework boxes.

We have around 30 smocks together with associated objects like photographs. Some of the smocks are 20th century revival smocks and there is a set of six pall bearer’s smocks worn specifically for funerals and kept by a church, which came from a Surrey village in the 1950s.

Smocks can be difficult to date accurately because they were mostly acquired in the early twentieth century before museums began asking for provenance information. Sometimes the smock has turned up in a house clearance and has been donated to the museum without knowledge of the original owner.

There was a national survey in the 1960s of smocks in museums which identified that there were distinctive regional styles of smocks. The curator at Guildford at the time, Dr. Enid Dance, identified a particular Surrey-Sussex type which doesn’t have as much embroidery as you find in other counties.

Some smocks have enormous epaulettes (an ornamental shoulder piece) but the Surrey-Sussex type, called a round frock, has a very small collar with a small, distinct area of embroidery. Surrey-Sussex smocks are also reversible, they are exactly the same front and back.

I asked another Guildford Museum Curator who has done extensive research into Surrey smocks, Dr. Mary Alexander, why that might be and the conclusion she had come to was that you could turn them around if the back got wet whilst working outside, making them very practical. I don’t know any other garment that’s reversible like that.

A Surrey Smock in the Guildford collection. © Guildford Heritage Service 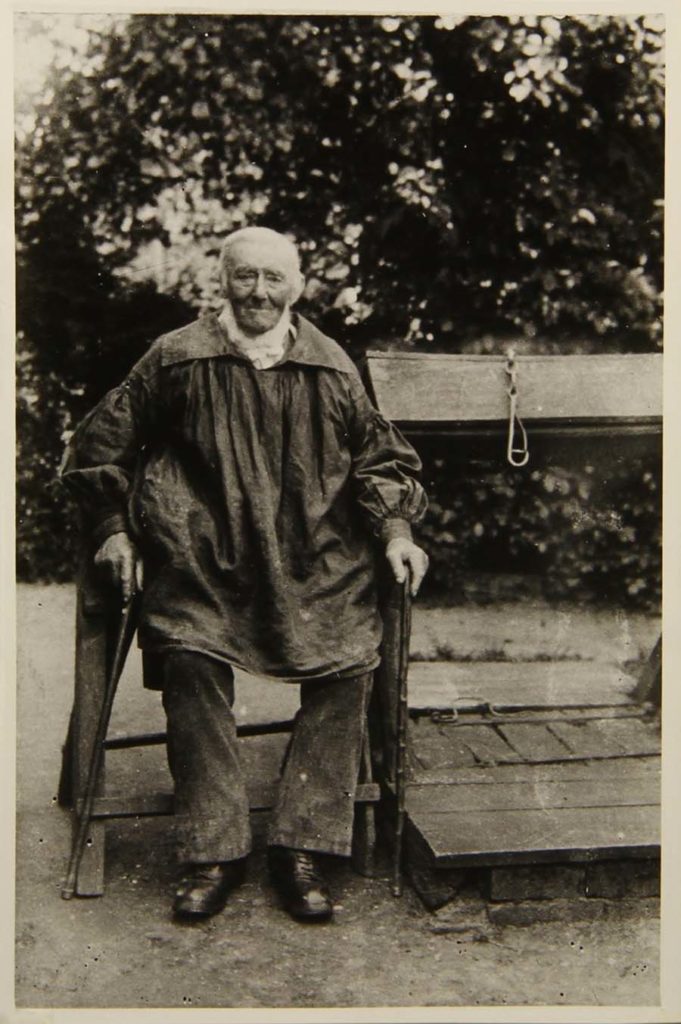 Working countrymen would have a working smock and a Sunday best smock which would be worn for a wedding and on special occasions. That’s why you might get older men continuing to wear their smock into later life – because it’s the best thing they have. There are photographs of older men wearing smocks even up to the 1910s and I would suggest that the smock has become a part of their identity.

By the late nineteenth century, younger men didn’t want to wear what their grandfathers were wearing – as well as being a traditional garment it also became a symbol of the ‘yokel’, someone who isn’t up to date with the times. What tends to survive in museums is the Sunday Best smocks which might have been passed down in families and which have the better quality of decorative needlework.

After its decline as a working garment in the countryside, the smock didn’t disappear because other people began appropriating it. In the late nineteenth and early twentieth century Liberty Stores made smocks for middle class children who would be dressed by their parents as little farmers or foresters. And the rational dress movement led by people like Mrs Oscar Wilde adopted the smock as a kind of anti-fashion statement – because you didn’t have to wear a corset under it. You also see artists adopting it to wear in the studio.

In the twentieth century various revivals in interest in the countryside, folk traditions and crafts – especially during the 1960s and 1970s – saw the smock become fashionable again, but these fashions were for women and children. Men have not worn smocks since those last gentlemen were wearing them in the 1910s. 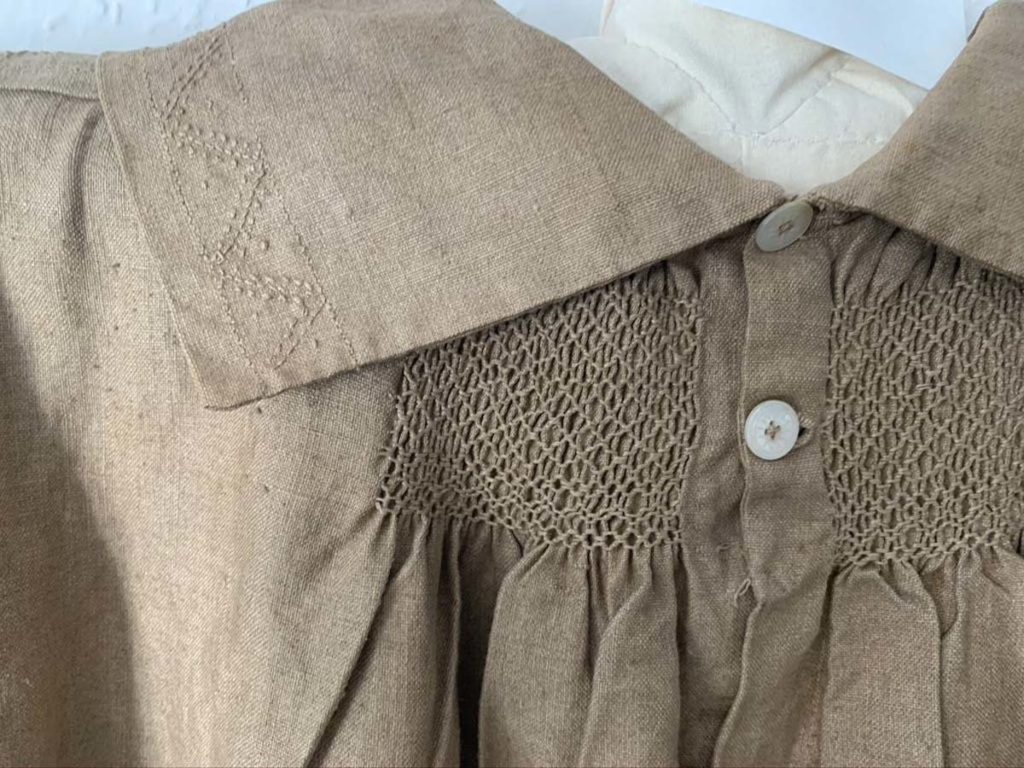 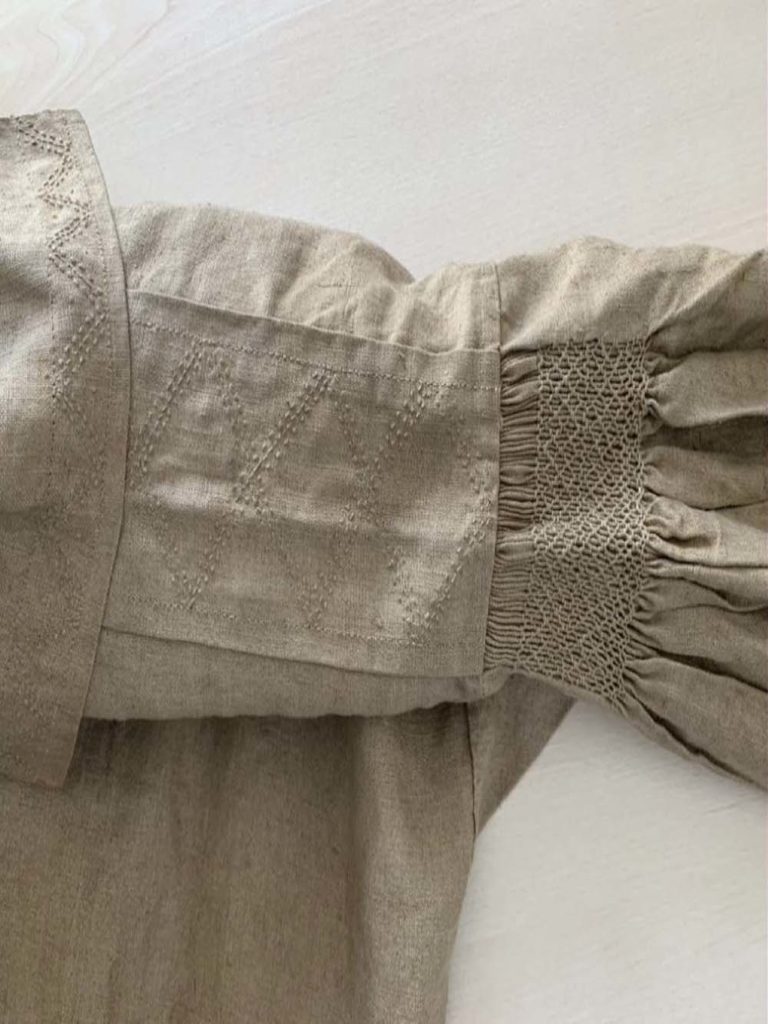 I think smocks are an interesting garment to think about at the moment. As a society we are being asked to think about our clothing and where it comes from – about sustainability and fast fashion. The smocks were a garment that was made locally, using linen grown in England, and using every scrap of fabric. They’re an example of artisan made, heirloom clothing that was made to last a lifetime.

Have we seen the end of smocks? No absolutely not, once again they are in fashion. A contemporary designer called Molly Godard has been inspired by smocks and smocking and one of her dresses, a pink dress evocative of a child’s smock dress, featured in the TV series Killing Eve. Her 2019 collection included a dress inspired by a men’s smock design from the 1850s. Her work is very popular with younger people and has brought smocking to mainstream culture.

Perhaps it’s because we are still nostalgic for simpler times and the smock-frock has become a short-hand for the values of tradition, locally made and hand-crafted. These are ideas that still resonate today.

The museum was founded in 1898 and now houses the largest collection of archaeology, local history and needlework in Surrey. There is a well-stocked shop selling a range of local history books and gifts.