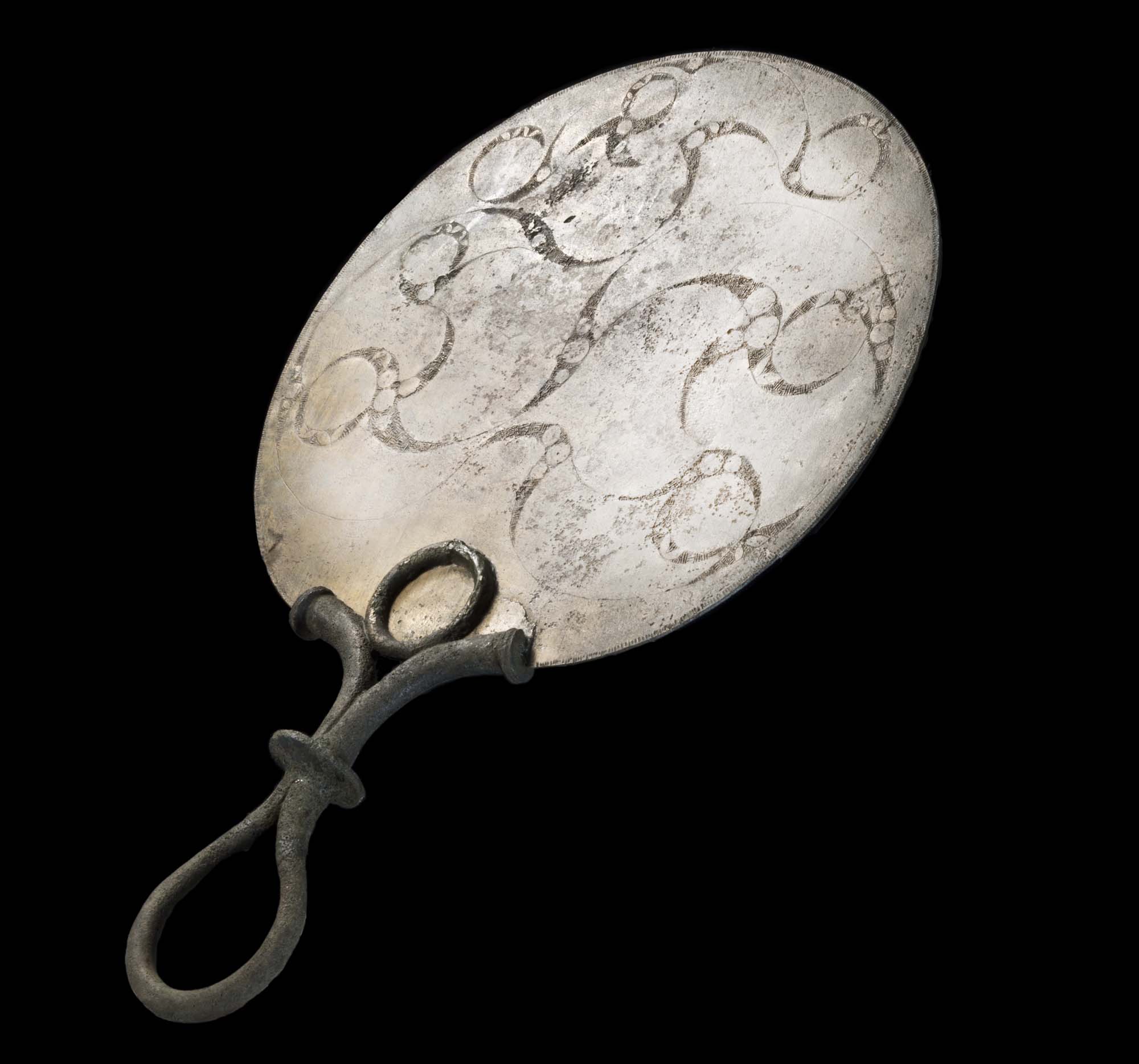 Iron age mirror found near Didcot, Oxfordshire. The disc is 18.5cm across, and 17.5cm from top to bottom.

We return to the story of an evocative object infused with mythologies and stories; the Oxfordshire Mirror held by Oxfordshire Museum in Woodstock

This mirror, found by a metal detectorist at an unknown location near Didcot some time before 2007, is a fine example of a Late Iron Age decorated mirror, which are unique to Britain. Only 58 are known to exist, with just 18 complete mirrors.

This one is an early example, dating to the 1st century BC, and is decorated with a highly unusual and beautiful curvilinear, La Tene-style pattern, which has been inscribed into the back by a craftsman who must have been extraordinarily skilled.

In Iron Age times mirrors would have been prestigious items, owned by only a few people but their exact functions in Iron Age society is not clear. Mirrors can be used to reflect light into dark spaces or to signal across distances, as well as to apply make-up or check your hair.

“In many cultures mirrors are magical objects, which reflect an alternative view of the world, or act as a portal to another world, like the one Alice found in Through the Looking Glass,” says David Moon, Curator of Archaeology for Oxfordshire Museum Service.

“Some experts believe this may well have been the case in Iron Age society, and mirrors may be connected to fortune telling or shamanic activity.”

While this mirror was a casual find with no archaeological context, Moon says some have been found in association with cremation burials, “so mirrors may also have had a function connected with death or afterlife, such as communicating with the dead,” he adds, “those mirrors that have been found in burials normally have the reflective side towards the person’s face.” 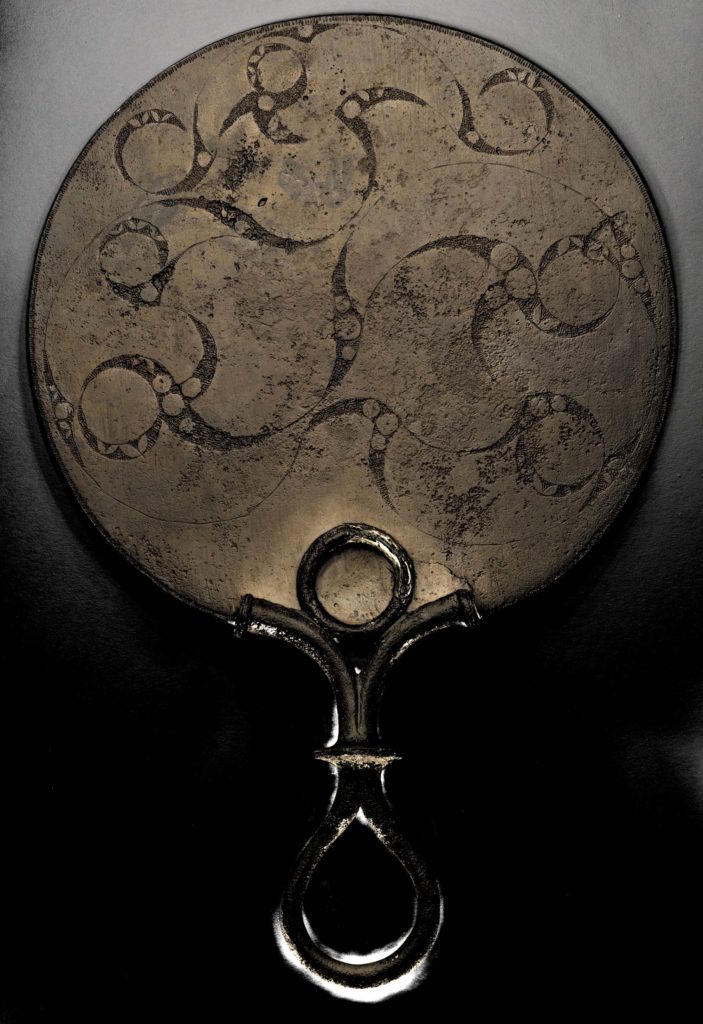 The Iron age mirror found near Didcot Oxfordshire. front. The disc is 18.5cm across, and 17.5cm from top to bottom (it isn’t quite circular). The total length, including the handle, is 27.5cm.

Research into the mirror revealed some striking similarities to another decorated Iron Age mirror, the Pegsdon Mirror, which was found by metal detectorists in what later turned out to be the grave of an Iron Age woman, located between the villages of Pegsdon and Shillington in Bedfordshire.

The find-spot of the Pegsdon Mirror is about 40 miles away from the area of south Oxfordshire where it is thought the Oxfordshire Mirror was found. Both sites also lie close to the Icknield Way prehistoric route, which was certainly in existence at the time the two mirrors were made.

Experts agree no other two decorated Iron Age mirrors look so alike and analysis by Dr Peter Northover, an expert metallurgist, revealed an exact match in the bronze used both in the Pegsdon disc and the handle of the Oxfordshire Mirror. Experts now think the two mirrors were made in the same place at the same time.

Further analysis of the Oxfordshire Mirror revealed it had been cast from molten bronze and then hammered out to make it thinner and flatter once the bronze had cooled – a very specialised process performed by a very talented craftsman. 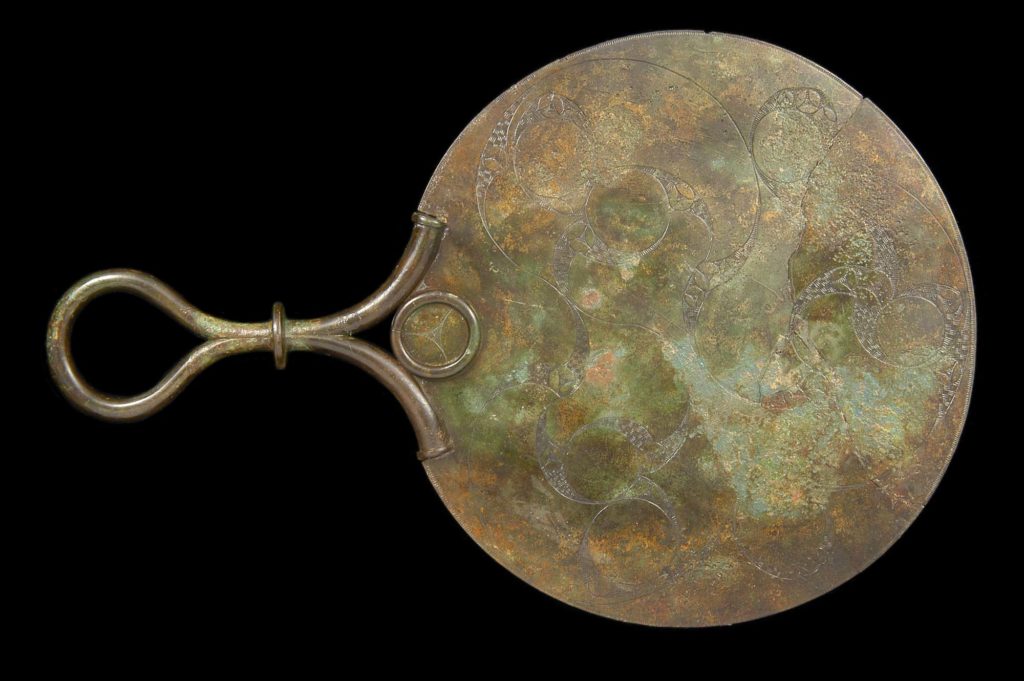 “We are left to ask what the implications of this connection between two of the best examples of decorated Iron Age mirrors are,” says Moon, “and what does this mean in the wider context of Iron Age archaeology?”

As the mirror is made from bronze and contains no precious metals the Oxfordshire Mirror was not classified as treasure, and so, after being recorded by the Finds Liaison Officer based in St Albans and undergoing conservation work by staff of St Albans Museum, the mirror went in to private ownership.

In 2013, it was sold to an anonymous overseas buyer. But a Curator at the British Museum appealed to the Department of Culture, Media and Sport and, in early 2014, a temporary export bar was placed on the mirror and it was offered for sale to a UK buyer at the recommended price of £33,000, so it could stay in the country.

With the help of donations from Wartski’s (the Court Jeweller), Arts Council England, Victoria and Albert Museum Purchase Grant Fund, The Headley Trust and the Friends of Oxfordshire Museum, as well as a substantial number of private donations from people both within Oxfordshire and further afield we raised the £33,000 needed to buy the mirror and keep it in the county

Read the find report on the Pegsdon Mirror and its associated grave goods at www.finds.org.uk

More Than Just A Mirror from Sharon Woodward on Vimeo.

Situated in the heart of the historic town of Woodstock, the award-winning redevelopment of Fletcher's House provides a home for the new County museum.

3 comments on “The Iron Age mirror infused with mythologies, stories and theories”